Notes: Capricious was my very first non-drugstore lipstick, purchased from the MAC counter at the Nordstrom near my old high school in San Francisco. (How’s that for a panoply of prepositional phrases?) Capricious has a lustre finish, which means that it’s glossy and sheer and, at least for me, somewhat drying—I think the culprit is the shimmer lurking in the formula. Despite this, I wore Capricious almost every day that fall. It’s a reddish plumberry color that will make you look nice, if you’re into that. 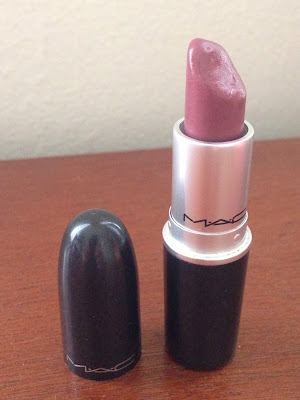 A fairly heavy swatch--you can see how sheer the Lustres are. If this were a different color, it would look uneven on my lips, but it's so close to my natural lip color that it blends in seamlessly. 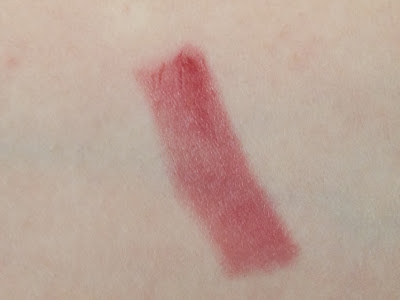 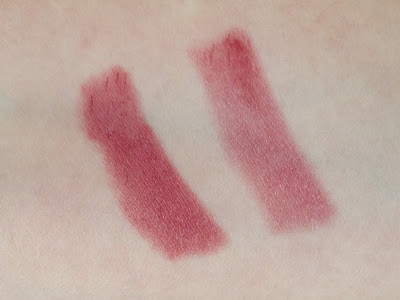 A dupe, a palpable dupe! The differences between Capricious (right) and Revlon Mauvy Night lie in formula and saturation, not in color. Mauvy Night is more opaque and slightly darker than Capricious, but they look almost identical on the lips. Frankly, I think I used Capricious more frequently than Mauvy Night because of the sleek MAC packaging and delicious vanilla scent, and because when you’ve just paid $15 for a lipstick instead of $8, you tend to value it that much more.

(I'm glad that reposting this on blogspot gave me the chance to re-swatch these lipsticks, because it was so cold in my apartment the first time that my arm was covered in goosebumps no matter what I did.)

Same eye situation as in the Mauvy Night post: a blend of two Maybelline cream eyeshadows, Bad to the Bronze and Pomegranate Punk. I love the combination of berry lips and bronzey eyes. Eyes closed because I had a hard time keeping the crazy out of them today. 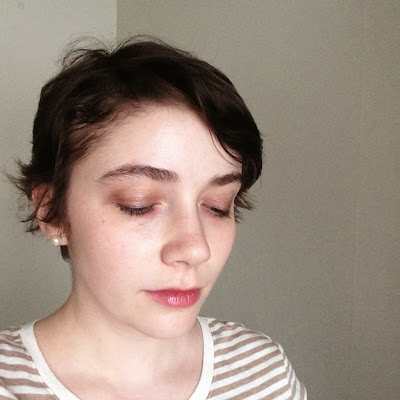 I don't wear Capricious very often these days, but it was a great starter lipstick. It also represents an important point on my beauty learning curve: in late 2011 I finally figured out which colors looked good on me instead of in a Platonic vacuum, and my lipstick purchases became more deliberate. I wanted colors I could wear on a normal day without drawing attention to my ZOMG BRIGHT LIPS, and my holy trinity that fall comprised Capricious, Bobbi Brown Roseberry, and Laura Mercier Bare Lips. It wasn't long before I went back to my Platonic vacuum, with its coral-reds and white-based pinks, but knowing the rules is never a bad thing.
Posted by auxiliary beauty at 4:45 PM