Remember the rapturous hype when Revlon released its Lip Butters in late 2011? More moisturizing than a lip balm! More pigmented than a sheer lipstick! Burn all your other lipsticks in a colossal auto-da-fé, these are the only ones you need! I'm always skeptical of such claims, but not as skeptical as I tell myself I am. I bought Tutti Frutti, a sheer jelly orange that turned into a pinky coral on my reddish lips. It was a beautiful color, but everything else was wrong. The formula wasn't moisturizing; worse, it was so soft that it never retracted fully into the tube, and I had to push it down with my finger. Last summer Tutti Frutti melted completely and I had to throw it out, so the first Lip Butter in my chronology is the second one I ever purchased: the berry-fuchsia Raspberry Pie. 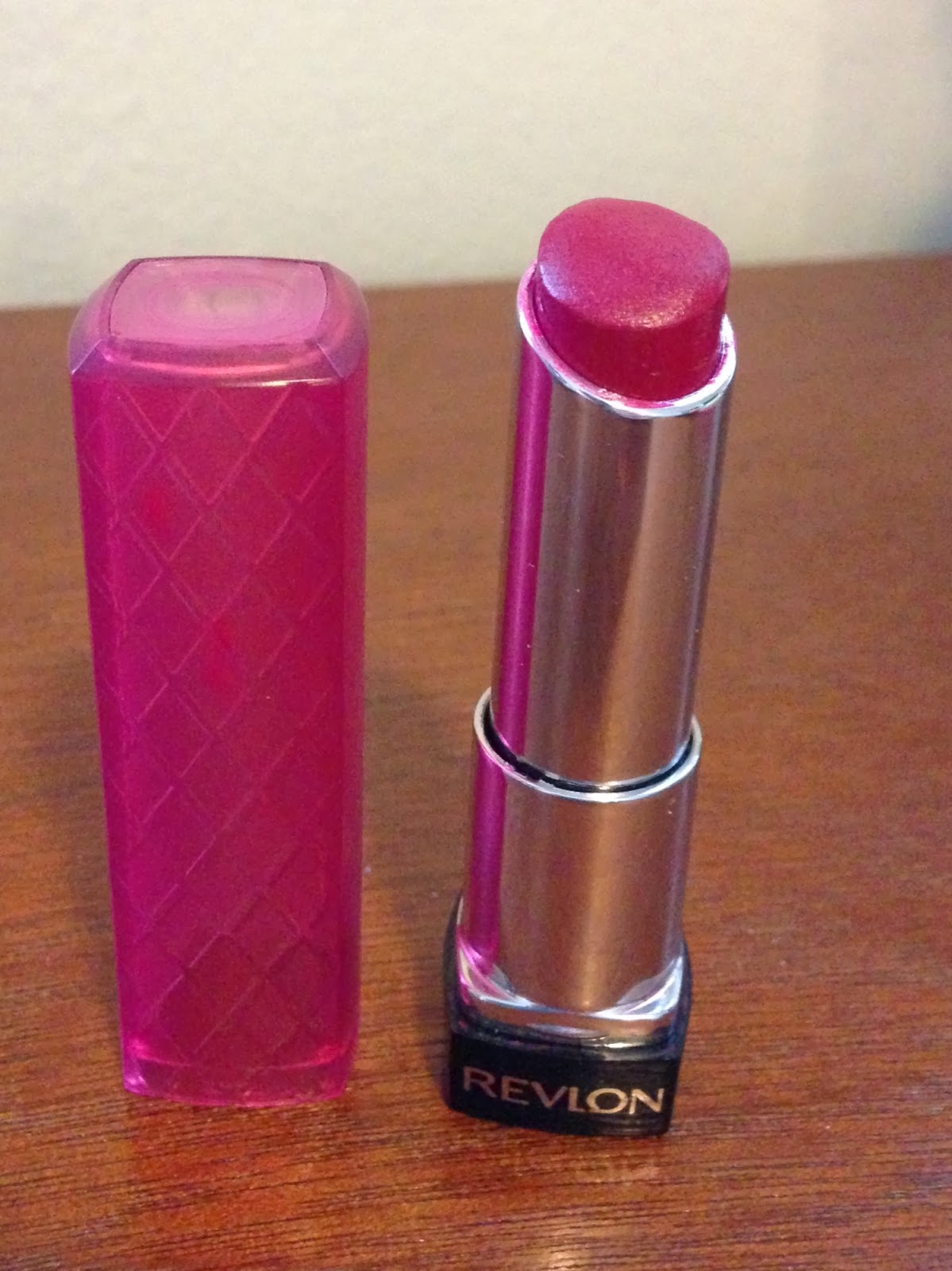 I've tried five Lip Butters now, and have found that the formula is inconsistent across shades. Raspberry Pie is less mushy than Tutti Frutti was, and the three I’ve bought in the last year—Pink Truffle, Candy Apple, and Red Velvet—are drier and firmer still, though Candy Apple still retains that jelly glow. I haven’t used up and repurchased any of these, so I can’t tell whether some shades are just softer than others, or whether Revlon has adjusted the overall formula since the Lip Butters first came out. Raspberry Pie is my most pigmented Lip Butter, though it still looks sheer-ish in an arm swatch: 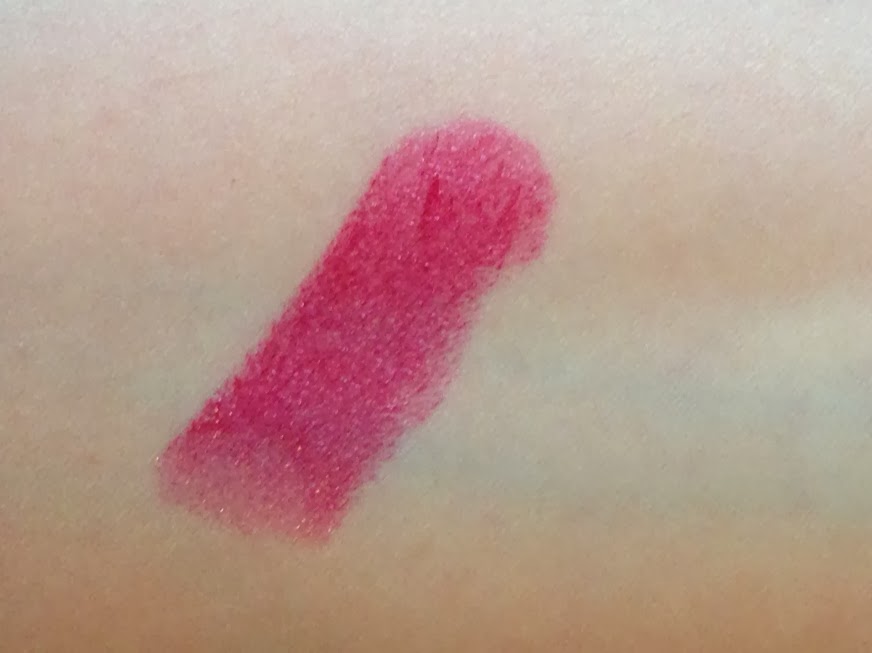 On the lips, however, it's a different story. 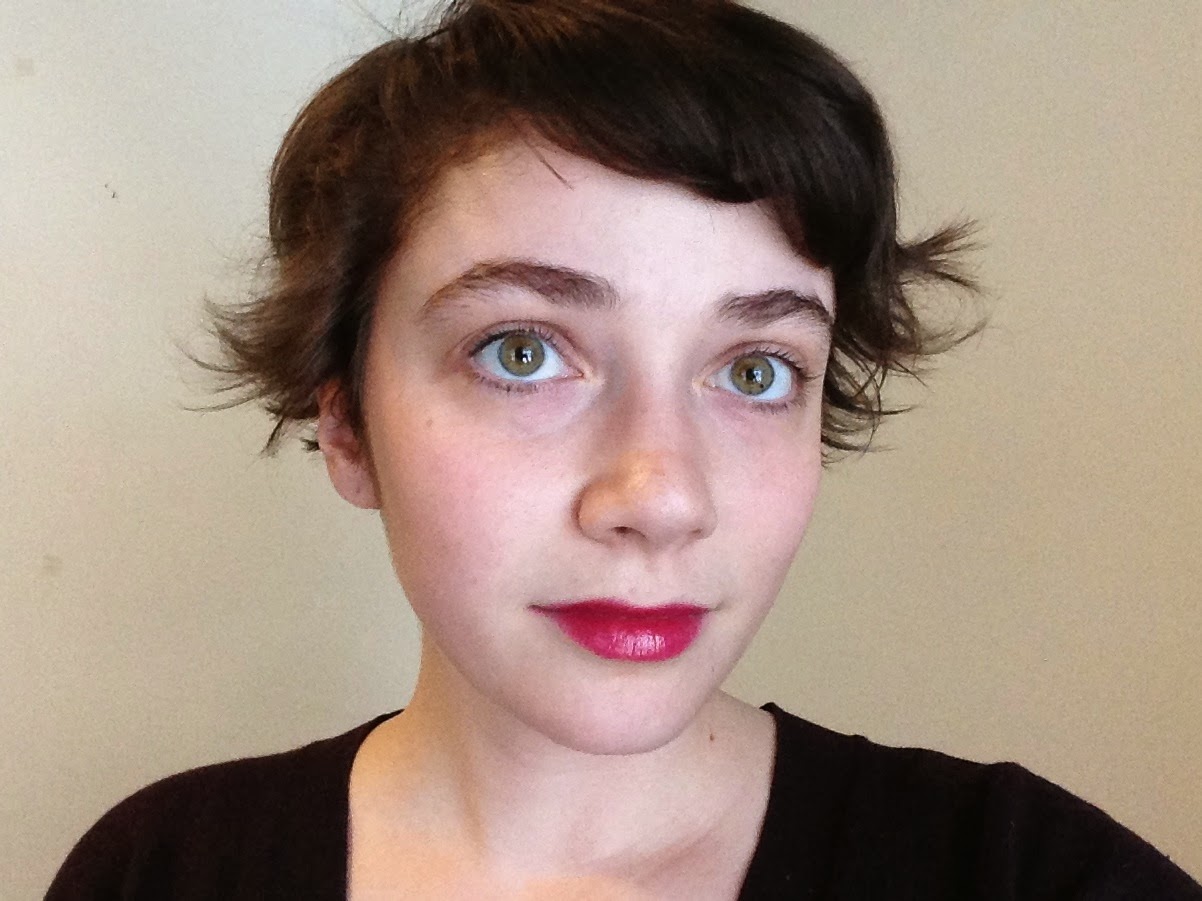 Raspberry Pie is one of the most flattering lip colors I own, so I'm at a loss to explain why I don't wear it more often. I think the problem is that it's as pigmented as a regular lipstick, but as soft and smeary as a balm (though not as hydrating). It gets everywhere, at least if you're not careful. And I'm lazy: I don't want to have to baby my lipsticks. But though the gloss disappears quickly (at least when you drink as much coffee as I do), Raspberry Pie does fade to a nice dark-pink stain, so it's not all bad.

In a recent meeting of my dissertation committee, one of my advisers counseled me, in an inadvertently sexual phrase, to “find the hole in human knowledge that your project is going to fill.” I think that advice holds true for lipstick collections, too, though I’m deep enough (ahem) in my addiction that I can almost always justify a new purchase: “Oh, but this pinky-red coral is matte and the one I have at home is only semi-matte!” Below, you can see (sort of) the hole that Raspberry Pie fills in my library of fuchsias. Left to right: Revlon Fuchsia, Raspberry Pie, Maybelline Vivid Rose, and Revlon Cherries in the Snow. 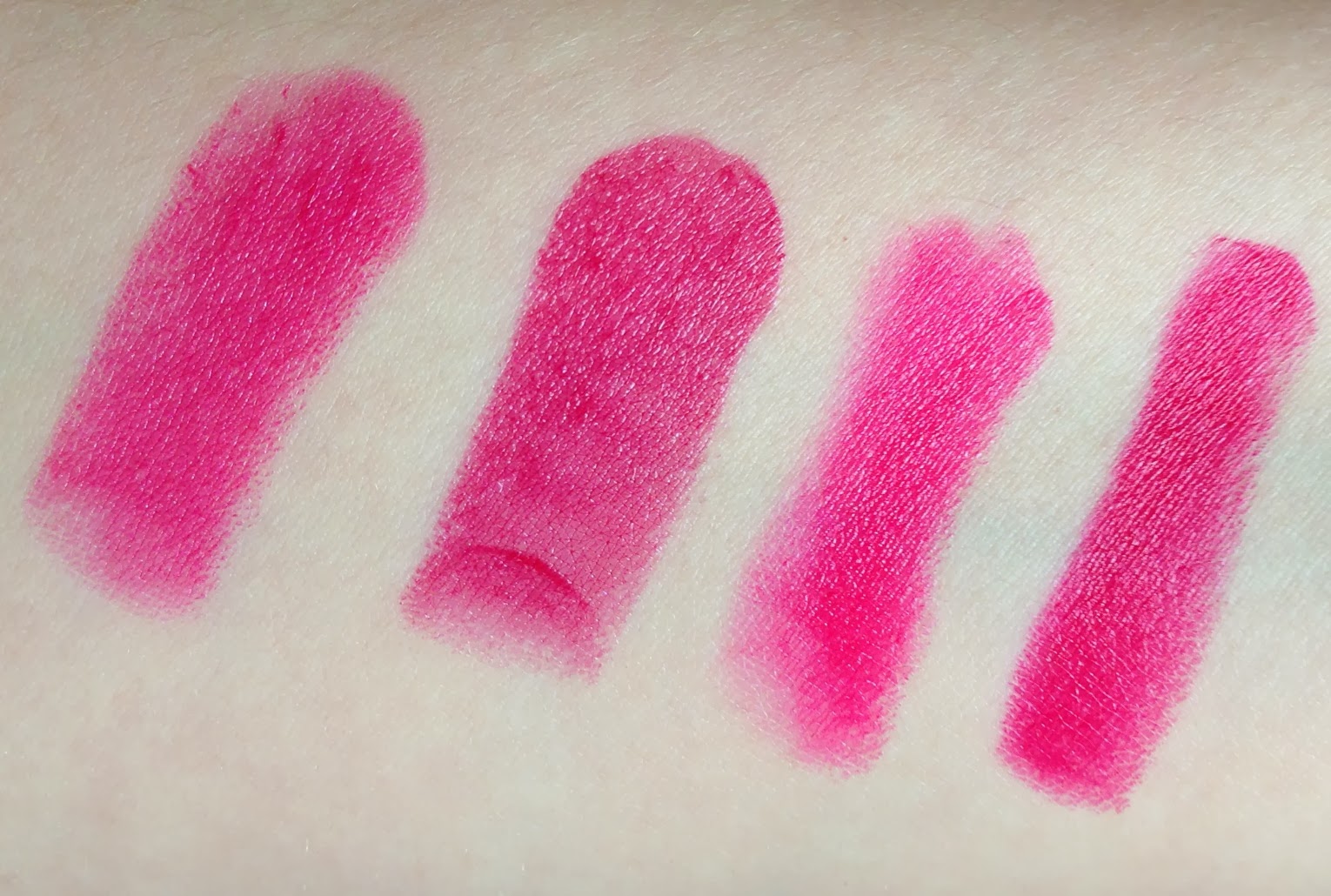 Raspberry Pie lacks the neon glow of Fuchsia or Vivid Rose, and it's darker, sheerer, and more purple than Cherries in the Snow. I think it's the most work-appropriate of the four, but I also think you shouldn't take advice on work-appropriate makeup from a full-time graduate student.

The Lip Butters look so cute all lined up; the packaging evokes certain Korean or Japanese cosmetics, though nothing can surpass Etude House or Paul & Joe for sheer twee rococo adorableness. Left to right: Candy Apple, Red Velvet, Raspberry Pie. This light gives the quilted covers a lovely stained-glass effect: 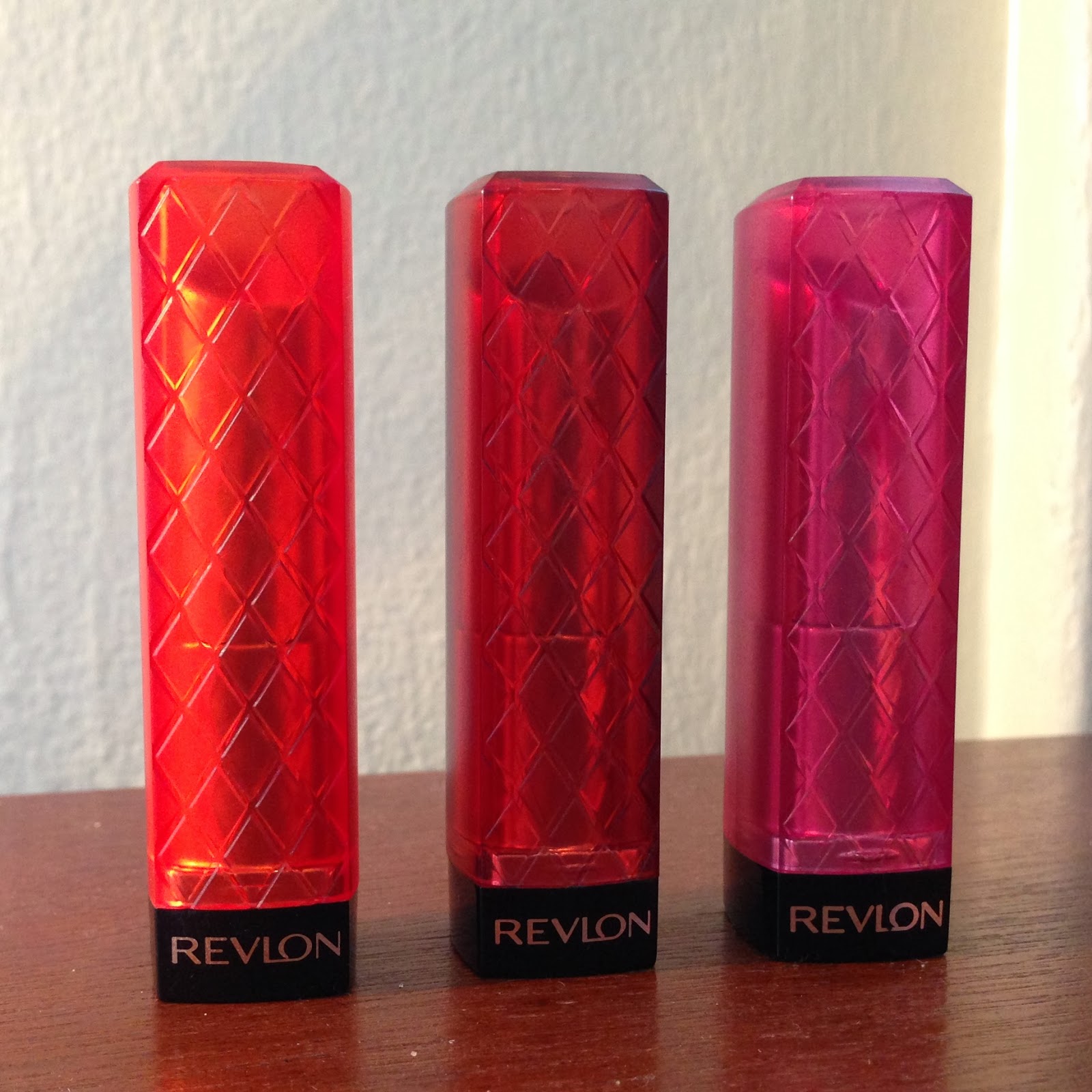 I also own a well-loved tube of Pink Truffle, but I lost it before taking this photo a month ago, and since then I've also lost my relatively new tube of Red Velvet. I'm prone to losing many things, but not to losing lipsticks, so I don't know what makes these particular lipsticks so easy to misplace. My life constantly reminds me of Elizabeth Bishop's "One Art": "So many things seem filled with the intent / To be lost that their loss is no disaster." Except when you're a poor grad student and can't justify replacing a $9 lipstick--but I do have fifty others to console me.
Posted by auxiliary beauty at 12:32 PM