Lipstick Chronology #17: Revlon Fire (and a Tribute to Velvet Goldmine)

Notes: If you're my friend for any length of time, you'll eventually have to watch one of three films: The Draughtsman's Contract, Revengers Tragedy, or Velvet Goldmine. If I really like you, I might make you watch all three. And since I've had this blog for nearly three months now, the time has come to blather about them to you. Aren't you lucky.

The Draughtsman's Contract (Peter Greenaway, 1982) takes place in an English country house in 1694. Revengers Tragedy (Alex Cox, 2003) is an adaptation of my favorite Jacobean revenge tragedy, set in a post-apocalyptic Liverpool governed by crime lords. Velvet Goldmine (Todd Haynes, 1998) is a non-linear fantasia straddling glam-rock London and gloomy '80s New York. Surprisingly, the three films have a lot in common. Each has a small cast of characters. Each presents an ornate dystopian world that never quite enters the realm of capital-F Fantasy. Each, in its own way, is sinister, campy, baroque. The directors are more invested in atmosphere than, I don't know, character development or plot, which means that each film is a perfectly contained aesthetic bubble. And that's my perennial weakness in fiction, whether literary or cinematic. What, you expect me to care about these characters as individuals?

(At this point you're probably wondering when I'm going to swoon over the genius of Wes Anderson. The answer is never. He leaves me completely cold. The three movies I've listed have a low-budget sloppiness that couldn't be further from Anderson's creepy precision.)

Oh, right: this is a beauty blog. And of the three movies I've listed, it goes without saying that Velvet Goldmine has the best beauty game. 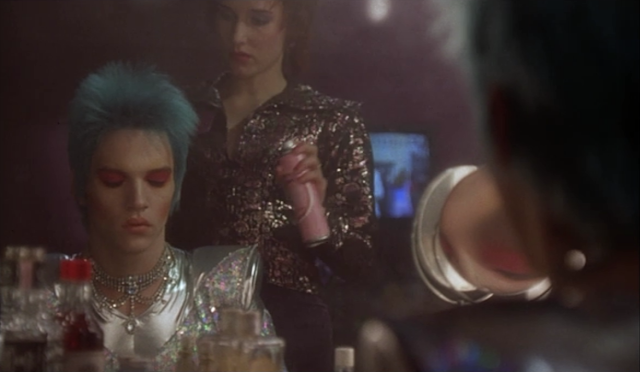 I confess that I did not apply pink eyeshadow or a blue wig for my poor man's Velvet Goldmine. Instead, I thought of this, my favorite shot from the film: 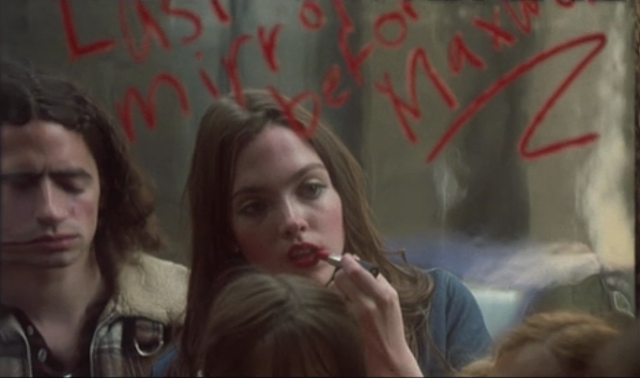 Fire is a very, very pigmented red gloss. It's a liquid lipstick without the staying power, meaning that I never wear it because it. gets. everywhere. If your job requires you to stand perfectly still in a hermetically sealed chamber, Fire is the gloss for you. But if your lifestyle happens to involve eating, drinking, kissing, or talking, God help you. Fire is far and away the most impractical lip product I own; it would fit right into the world of Velvet Goldmine. 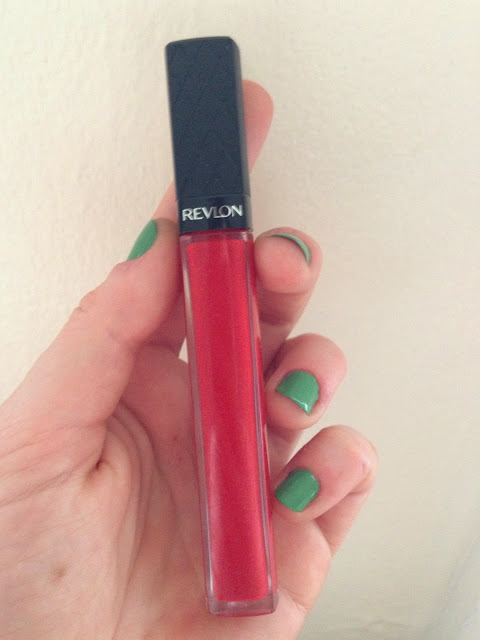 And now for a question that has perplexed me ever since I bought Fire: is it a warm red or a cool one? Christine of Temptalia sees it as warm, but most colors seem to pull warmer on her than they do on me. Swatched on both my arm and my lips, and photographed in natural light on an overcast day, Fire strikes me as a cool-leaning neutral red. 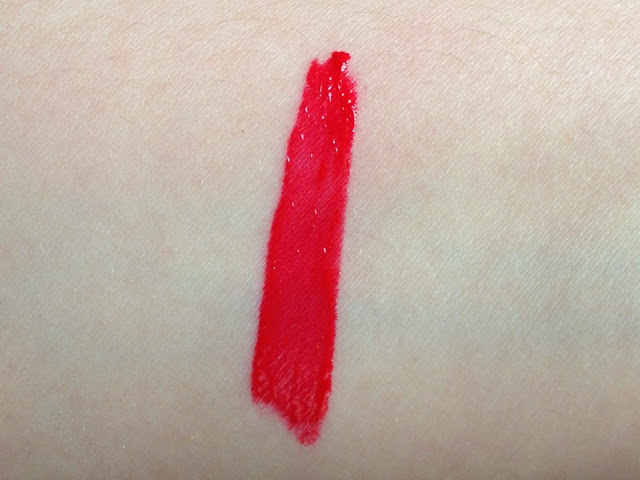 CAN YOU BELIEVE THAT PIGMENTATION. 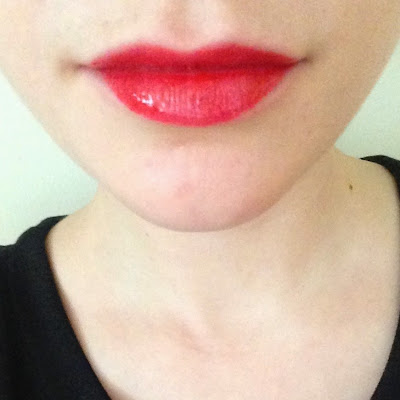 For my Velvet Goldmine homage (also influenced by this tutorial), I attempted a bronzey smokey eye with four eyeshadows, three from theBalm's Nude 'Tude palette. I started with a base of Maybelline cream eyeshadow in Bad to the Bronze all over the mobile lid, then added theBalm Seductive, a shimmery bronze, in the middle third; Sophisticated, a shimmery cool brown, in the outer corner and into the crease; and Sleek, a dark matte brown, to line the upper and lower lash lines. I applied a heavy layer of NARS Coeur Battant blush ("heavy" by my standards; normal, I suspect, by normal standards) high on the cheekbones and onto the temples for that Studio 54 look: 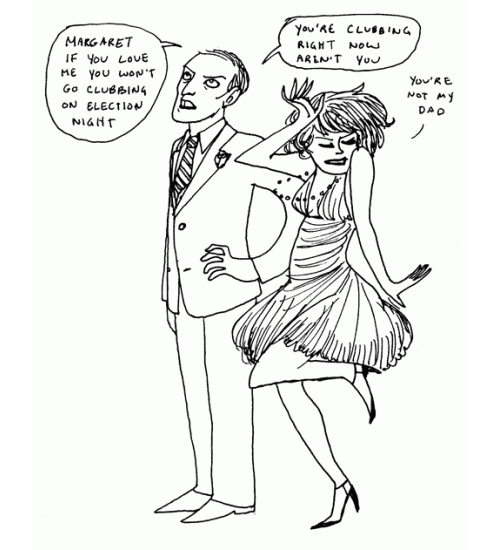 (Pierre and Margaret Trudeau, by the inimitable Kate Beaton.)

The result (be kind, this must be the third or fourth smokey eye of my entire life): 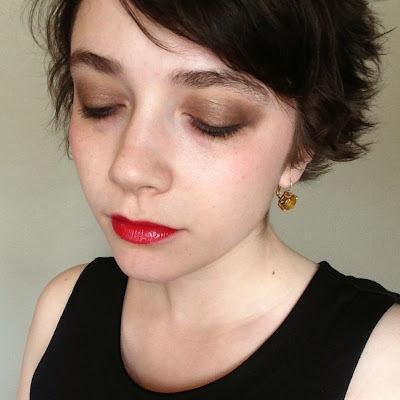 Congratulations to me: I've made an impractical lip color even more impractical. 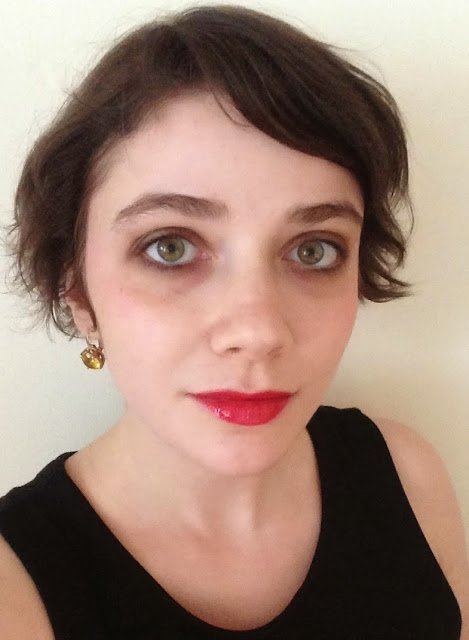 Assembling this look was fun! And since my ~beauty resolution~ for this year was to get more creative and adventurous with eye makeup, this is a good first step. I still believe that a bright lip can be dressed down more easily than an elaborate eye, and my life, alas, involves a lot of dressing down (and being dressed down). But I'm certainly going to keep experimenting with different eyeshadow and liner placements on the blog, and when my much-delayed NYX package finally arrives, I'll have some new treats to play with.

Well, this was a long, strange ramble of a post. Congratulations on making it to the end.
Posted by auxiliary beauty at 10:09 PM