NYX Reviews, Part I: The Bad

Internet has been restored to my apartment, light to my darkness, warmth to my frostbitten soul. No, forget that last one; it's still below freezing in late March. But I do have a wireless connection again, and that means swatches and reviews.

First, though, a rant. I ordered from NYX's website, which promises that "orders received on Friday, Saturday and Sunday will be processed on the following Monday and shipped by the following Wednesday." I placed my order on Sunday. Wednesday rolled around, then Thursday, then Friday, and I had yet to hear anything from NYX. On Friday afternoon I called the customer-service number and was told that my order hadn't been shipped because one of the items had needed to be restocked. The man I spoke to was nice enough to upgrade my shipping to FedEx ground shipping instead of USPS, but my package didn't arrive for another five days, which made me wonder how long the regular shipping would have taken. Also, I find it odd that my package was sent immediately after I made the call, as if they'd just forgotten to ship it and needed the reminder. Not a huge inconvenience, but it doesn't make me want to order through the NYX website again.

I made a pretty sizable order, at least by my standards: two Butter Glosses in Raspberry Tart (new this year) and Peach Cobbler; a Jumbo Eye Pencil in Knight; a Slide On Eye Pencil in Jewel; three "Hot Singles" (lulz) eyeshadow singles; and the HD Eye Shadow Base, which the website does a very poor job of distinguishing from the regular shadow base, and which comes in only one shade, "cool-toned white person."

And now for the reviews! Let's give the bad ones their own post, shall we?

As part of my project to expand my repertoire of eye looks, I ordered three eyeshadow colors outside my taupey comfort zone: Dayclub, described on the website as a "dark gold pearl"; Burlesque, an "iridescent dark purple"; and After Party, a "deep olive pearl." Since the NYX eyeshadow singles were reformulated very recently, there are almost no swatches of the new shadows online. I hope this review will help people make up their minds to run far, far away. 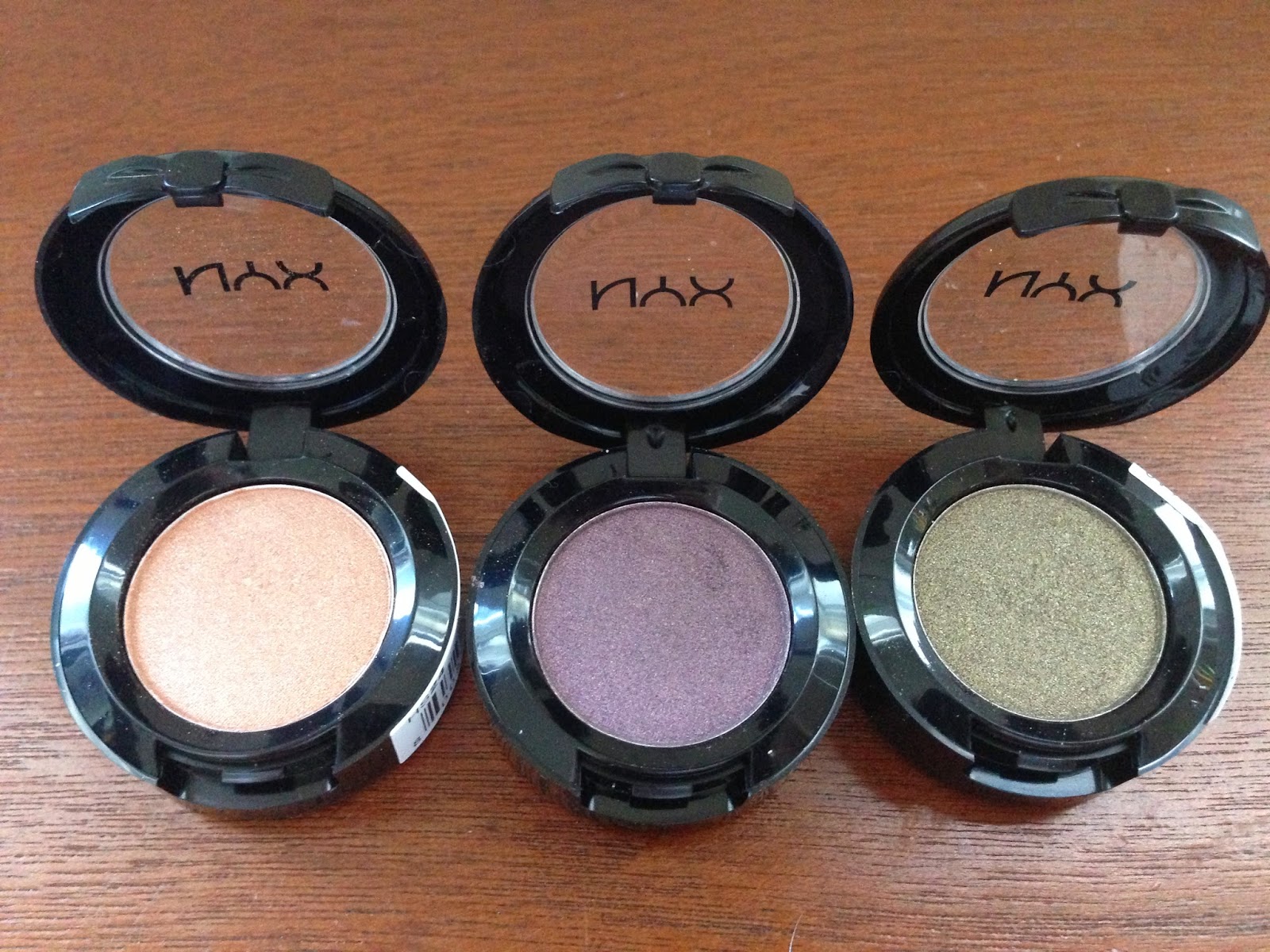 I don't know, man. Does the eyeshadow on the left look like a "dark gold pearl" to you? I promise that the light isn't washing out the color; it really is that anemic terracotta shade. Also, if there's any iridescence in Burlesque, I'm certainly not seeing it. The olive one is olive. Good job, NYX.

Closeup of Dayclub, for science: 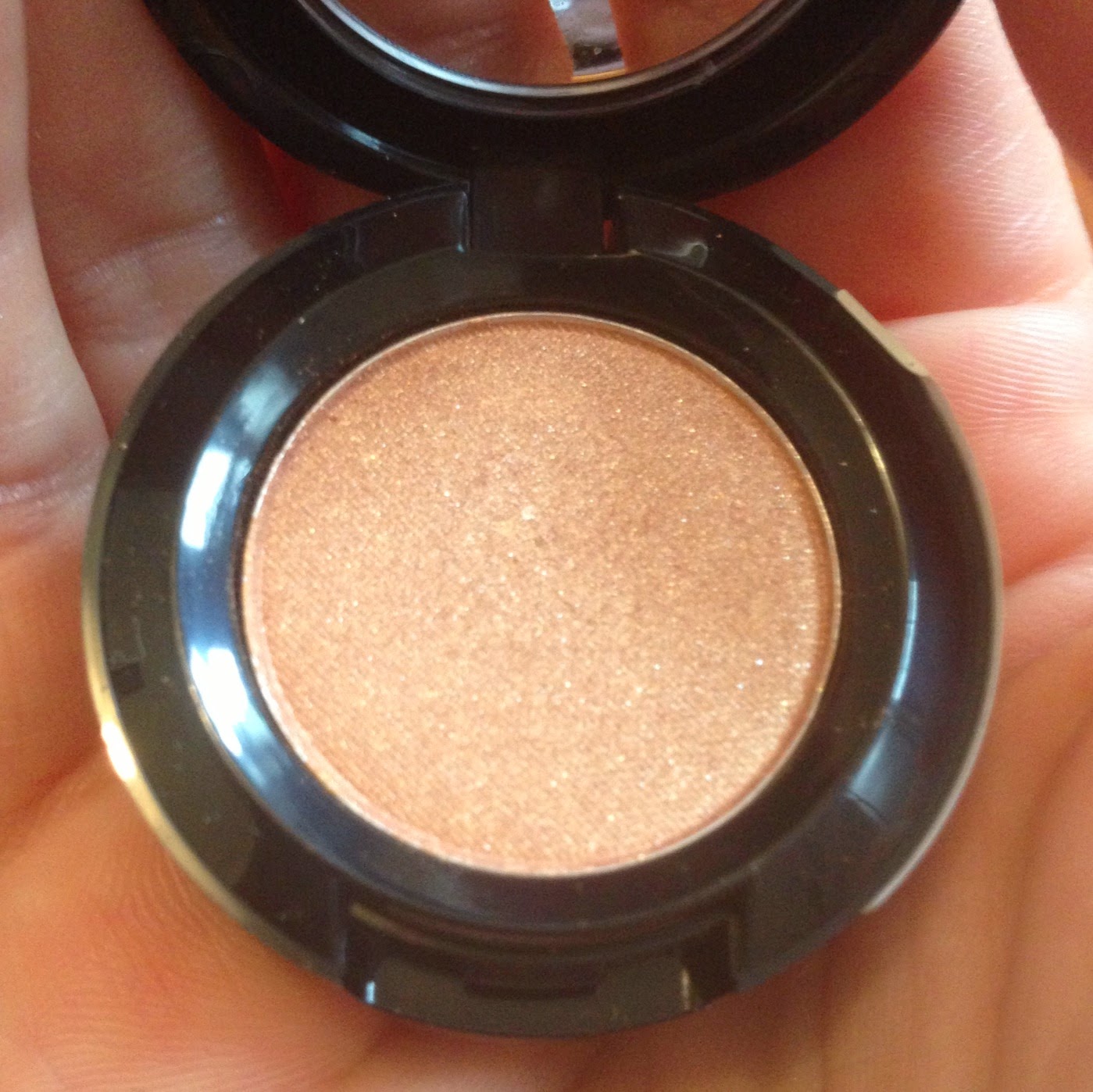 I like these oh-so-edgy names; they suit my lifestyle perfectly. 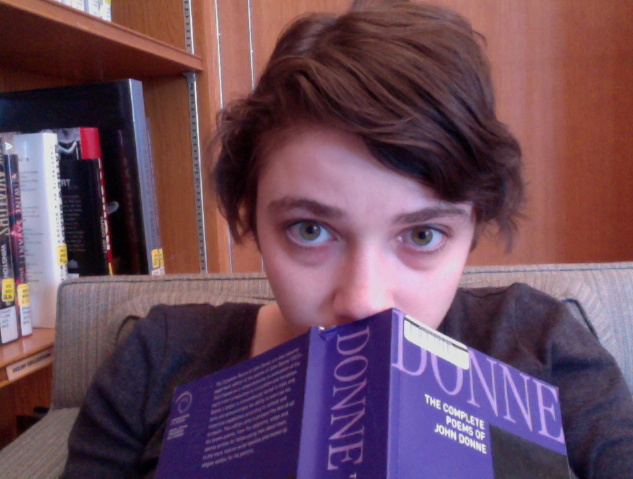 Swatches, left to right: After Party, Burlesque, Dayclub. I made the right-hand swatches over the NYX HD primer, the left-hand swatches with no primer. For each swatch, I took a good swipe with an eyeshadow brush and went over my arm once. Keep in mind that NYX describes this eyeshadow as "the latest and greatest high-intensity eye shadow formula...versatile and powerfully loaded with pigments to make a statement for any occasion." 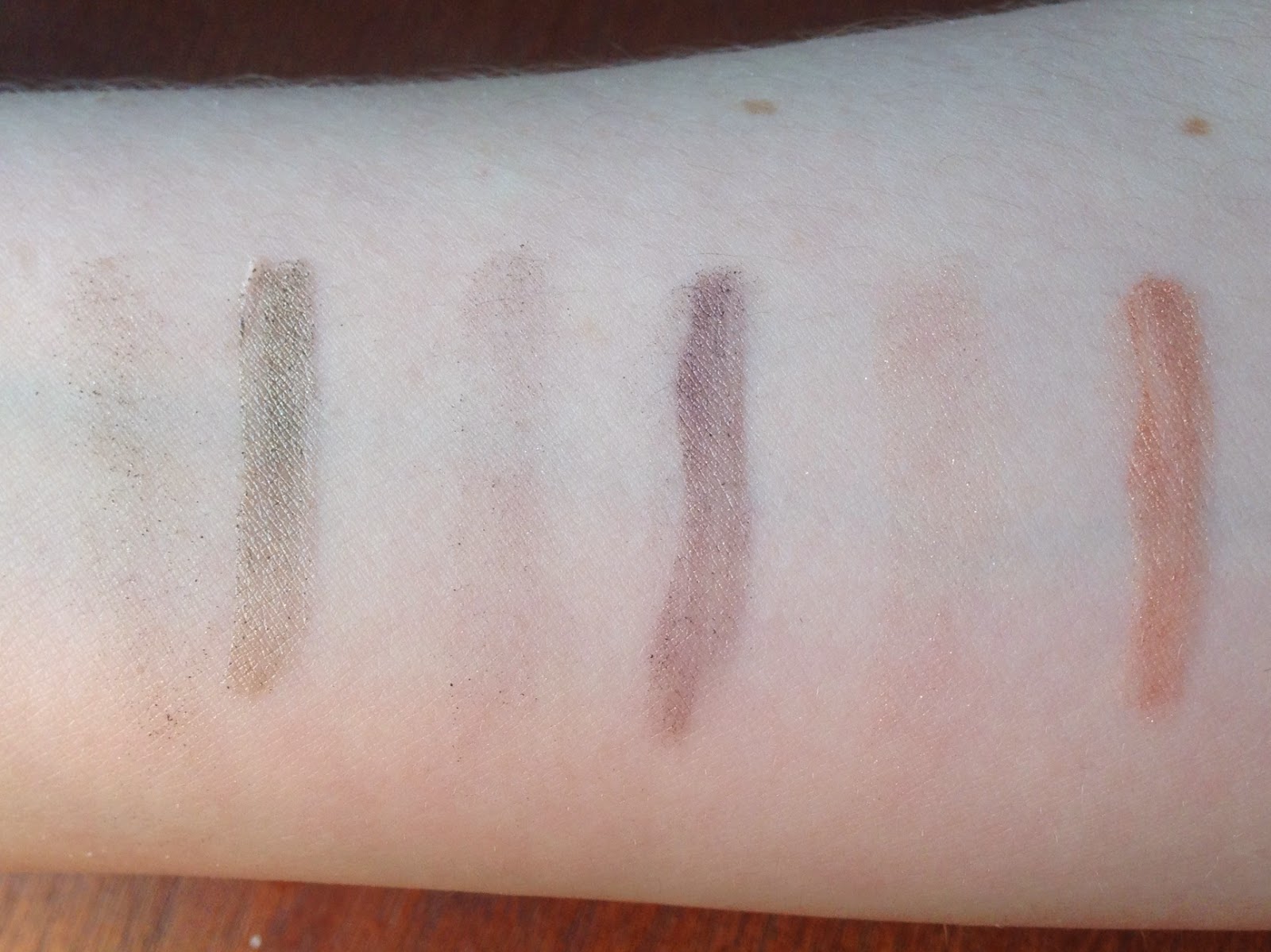 The shadows are so powdery, so dry, so coarse, so poorly pigmented, that they're practically invisible without primer. They're so bad I actually feel insulted. And this is a reformulation of the original shadows, which means someone tested the formula and said, "Yep, this is an improvement"--or, more likely, "Yep, we can cut some costs this way."

The snobbish part of my brain, the part that wants me to forget I'm living on a grad-student stipend, asks me what I expected for $4.50 a pop. But the rational part of my brain says no to that bullshit. For $4.50, for $2, for anything more than $0, I expect a product to work. Not to work miracles, but to do what it claims to do. And if NYX describes its new eyeshadow singles as "high-intensity" and "powerfully loaded with pigments," that's what I'll expect. For now, though, I think I'd better splurge on a NARS duo. I'm leaning toward the regal greeny golds of Paramaribo.

Tomorrow, the good: eyeliners, glosses, and some looks featuring my new acquisitions (shadows excepted, because come on).
Posted by auxiliary beauty at 10:31 PM