After the earlier, sadder installment of my NYX review, let's have a family portrait of the purchases I actually like. Left to right: Jumbo Eye Pencil in Knight; Slide On Eye Pencil in Jewel; HD Eye Shadow Base; Butter Glosses in Raspberry Tart and Peach Cobbler. 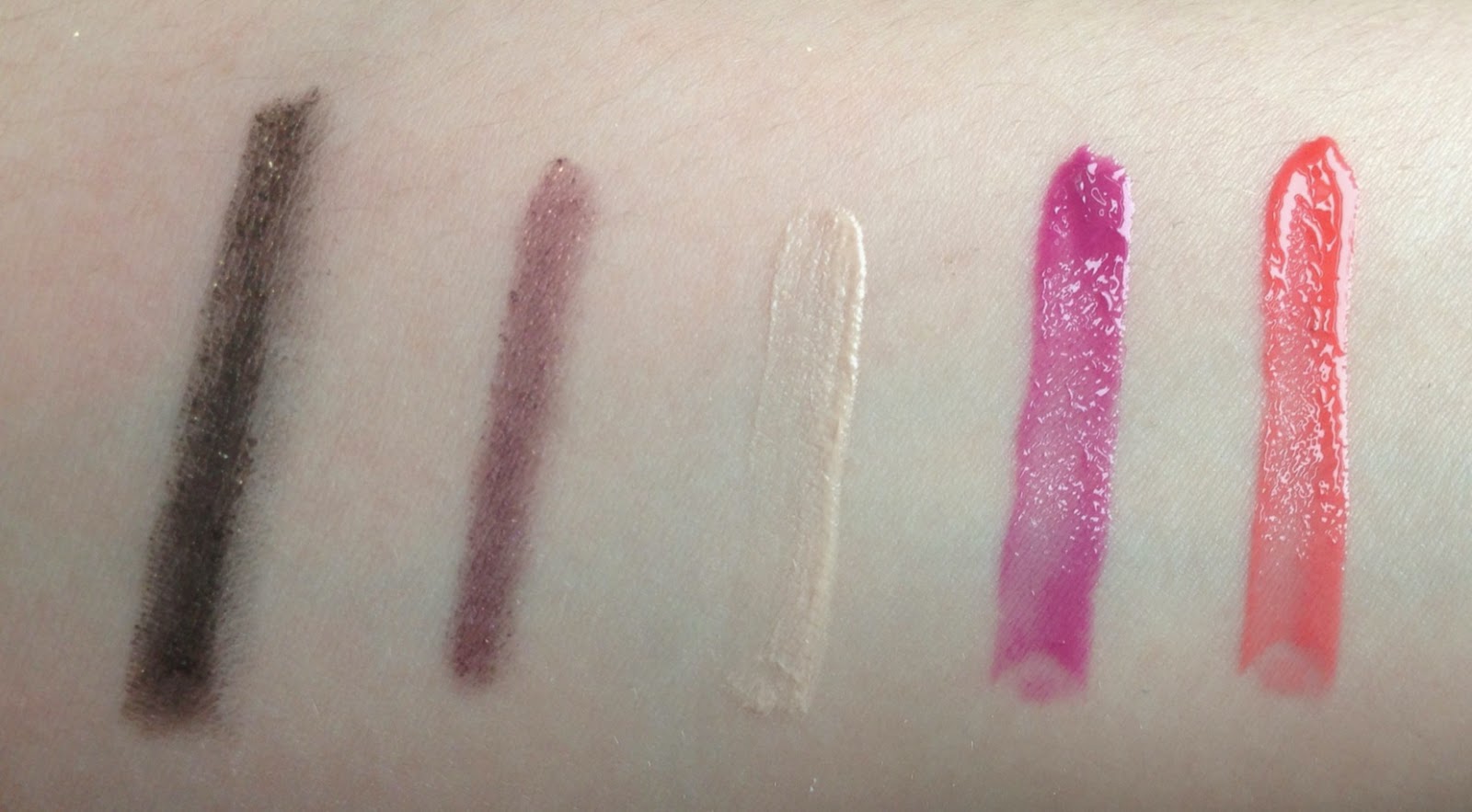 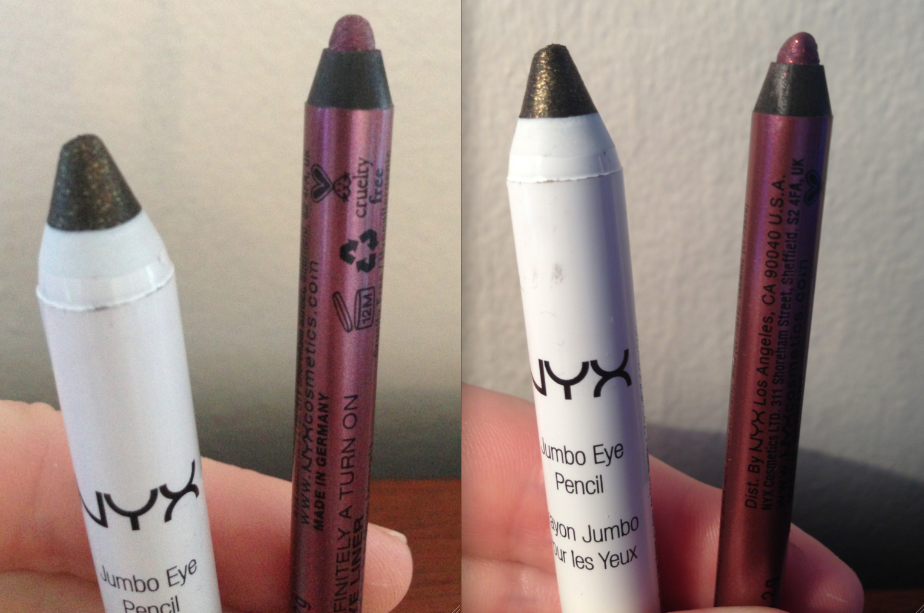 Knight is absolutely crammed with glitter; Jewel is a bit more tasteful, though if you're buying glitter eyeliners you're probably not too concerned about good taste.

NYX's Jumbo Eye Pencils can be used as eyeliners or eyeshadow sticks, though I find they work better as the latter. They have a soft formula that isn't conducive to sharp, precise lines, but if you like smudgy imprecision as much as I do, you'll enjoy these. The pencils look like they're made of white plastic, so I assumed they would have a twist-up mechanism, but they're actually coated wood and need to be sharpened. Don't make my mistake and nearly break your pencil trying to twist it up! After a quick Google, I used my NARS dual sharpener on Knight and it worked perfectly. NYX describes Knight as "forest green with gold glitter," which is exactly right: it's a blackened green with large, very noticeable glitter particles. You'll probably get a bit of fallout with this shade, which I don't mind terribly. I like to believe that the errant glitter distracts the viewer from my nightmarish under-eye circles.

Jewel, described as a "shimmering plum," is a thinner, firmer eyeliner, though still soft enough to be smudged and even used as shadow. It's a reddish purple with pink glitter. For some reason, the Slide On Pencils are almost twice as expensive as the Jumbo Pencils: $8.50 as opposed to $4.50. Maybe it's because the Slide On Pencils are a blatant ripoff of Urban Decay's Glide On Pencils, and thus carry a faint glimmer of prestige? Who knows.

When the pencils are swatched in indirect natural light, the glitter is pretty subdued, and the green of Knight looks almost black: 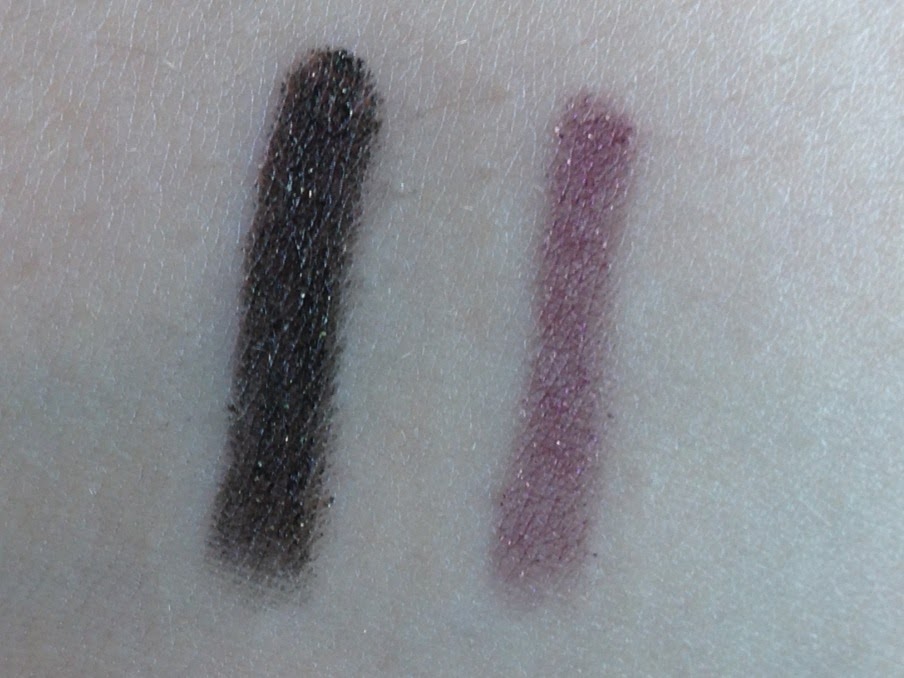 In direct light, though, it's sparkle o'clock; I wish I'd had these for my Velvet Goldmine look. 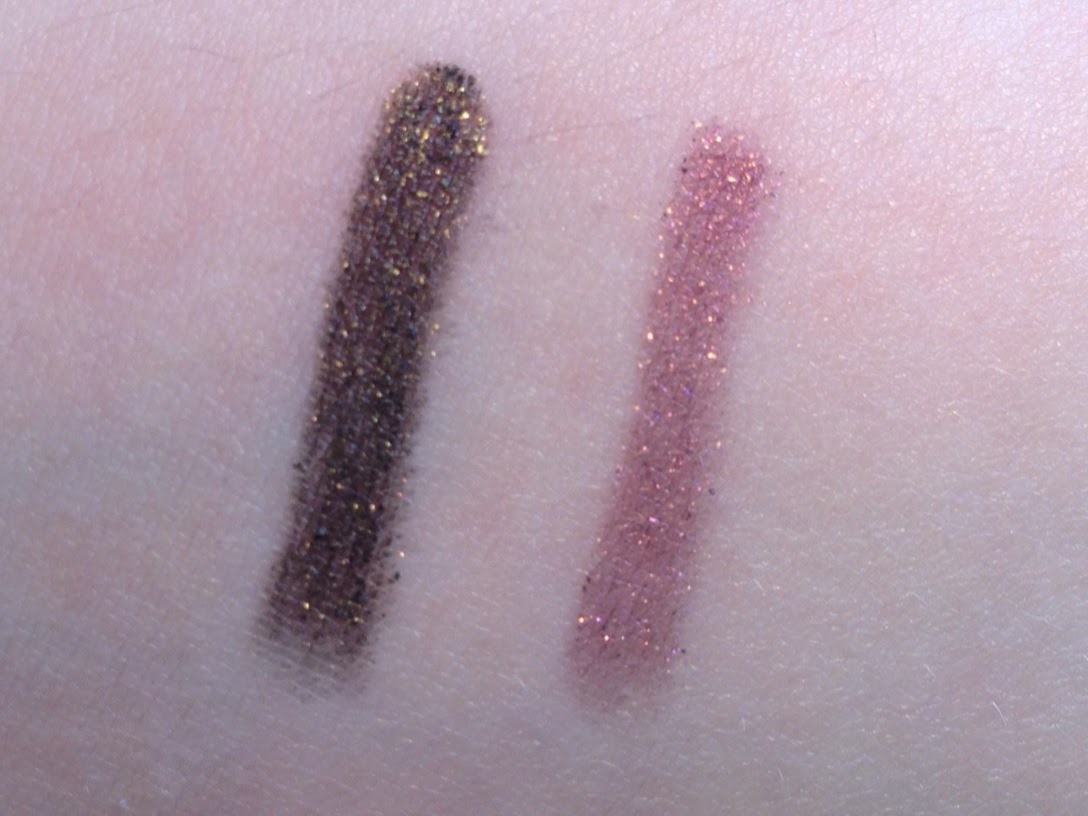 NYX's Butter Glosses have been swatched and reviewed ad nauseam, mostly positively, so all I can do is add my voice to the chorus. I really love these. I have quite a few requirements for glosses: they need to be lightweight, non-sticky, semi-opaque, hydrating, and preferably free of shimmer. Cardinal gloss sins include heavy gumminess (looking at you, Milani), total opacity (which makes a gloss so messy as to be unwearable on a normal day), and might-as-well-be-Vaseline sheerness. I'm delighted to say that the Butter Glosses avoid all those sins. And they smell exactly like Maria crackers: 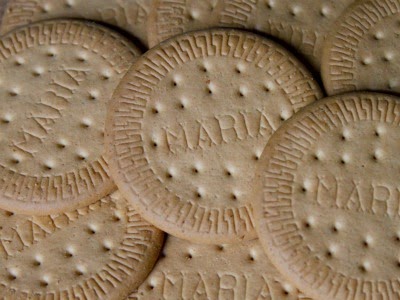 I ordered Peach Cobbler, described on the website as a "red-orange," and Raspberry Tart, described only as "violet": 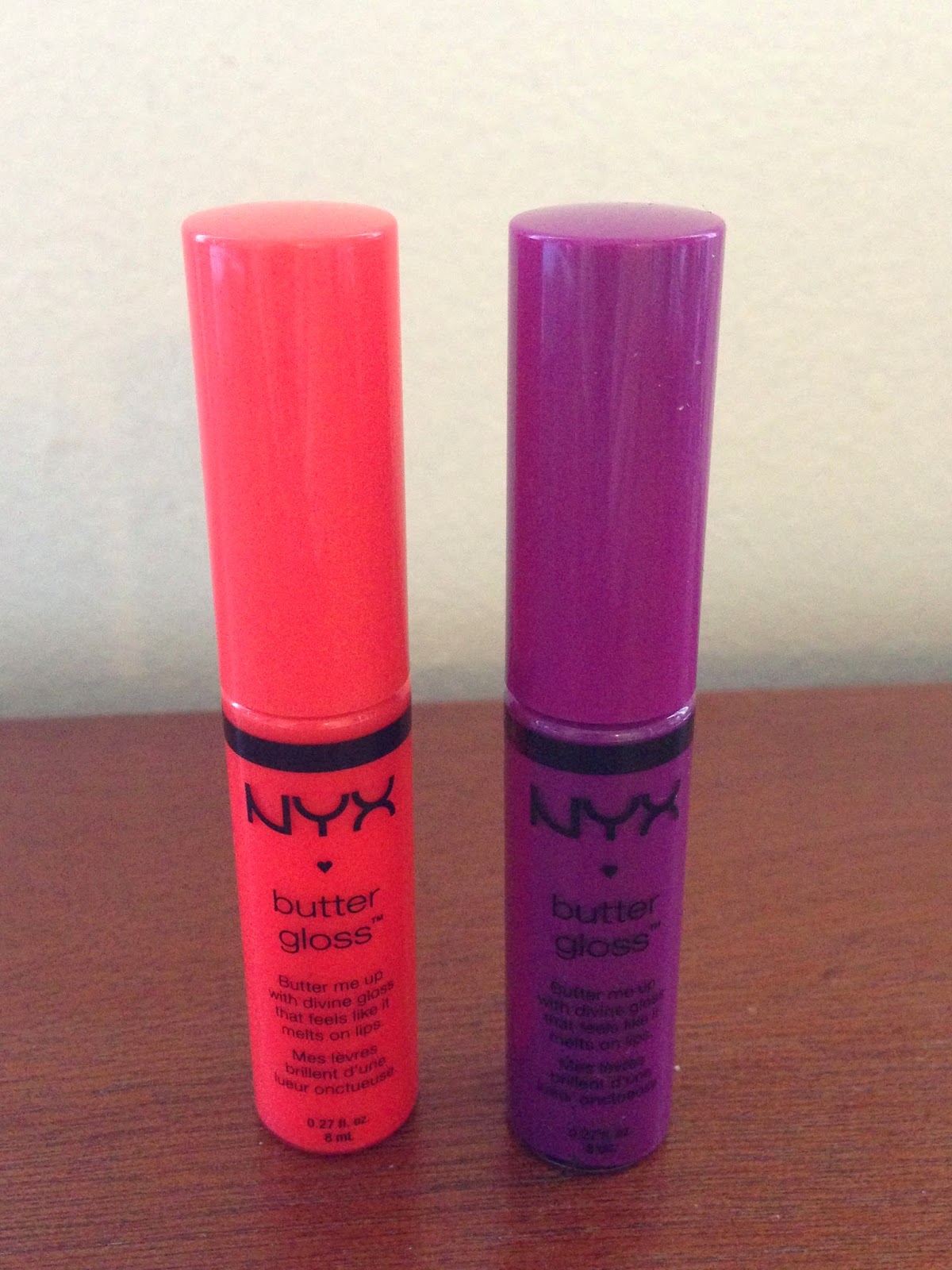 The phrase "red-orange" makes me think of lipsticks like MAC's Lady Danger, not of soft peachy oranges like Peach Cobbler, which turns even softer and pinker on the lips. Raspberry Tart is a cheerful pinky-purple, less blue-toned and severe than Maybelline Vision in Violet. Hashtag radiant orchid, amirite. 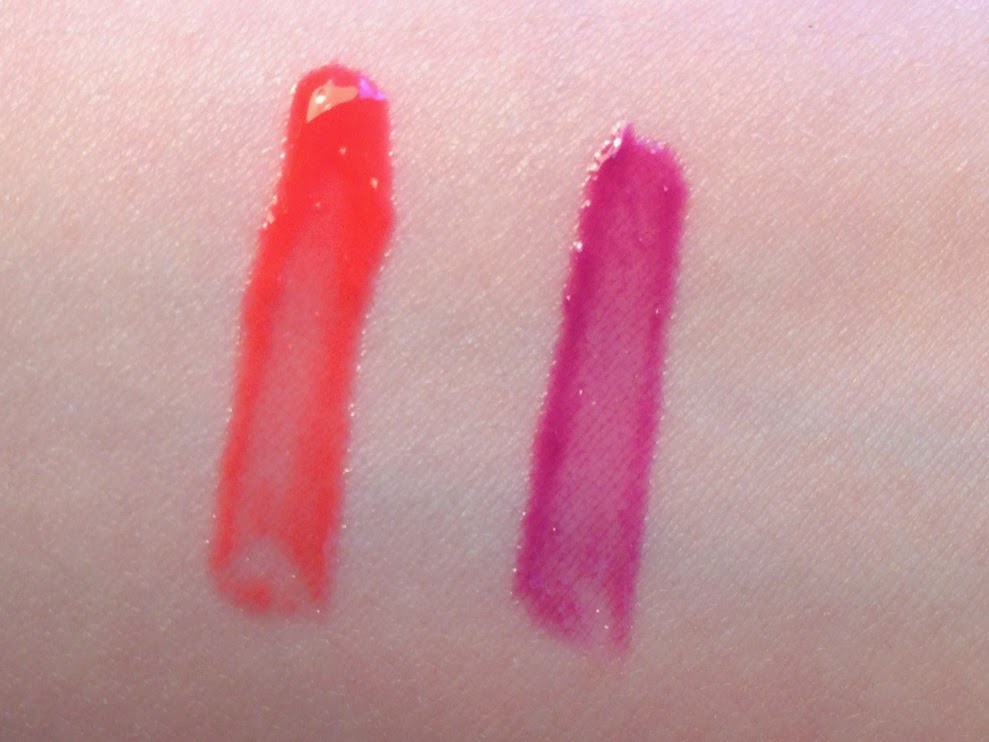 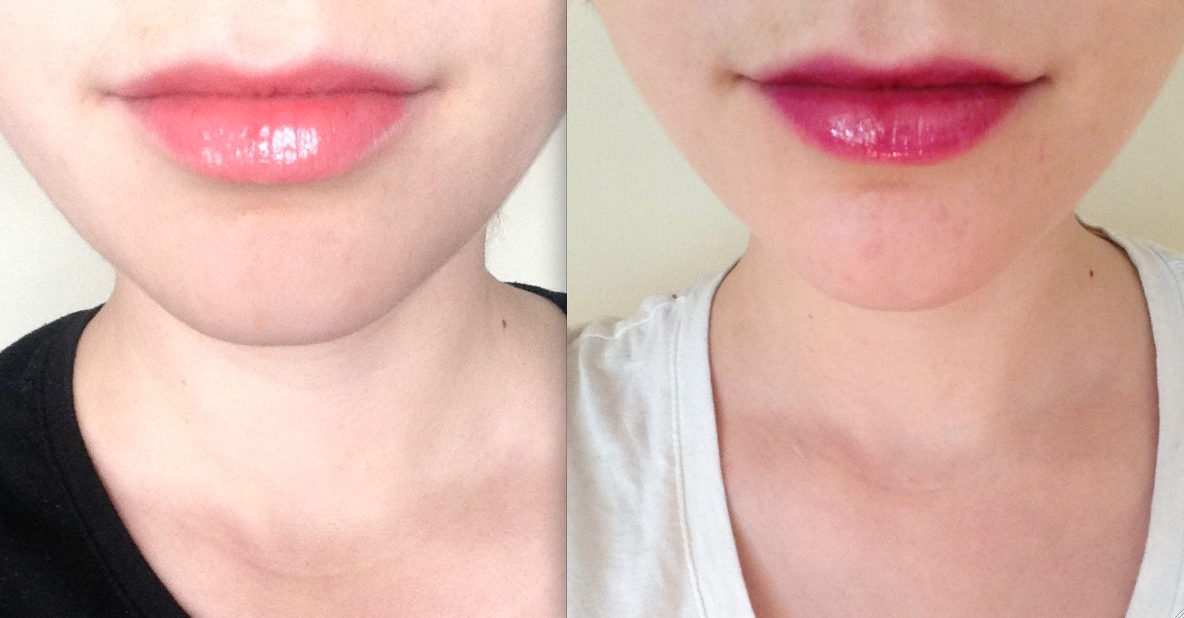 I was delighted to discover that Raspberry Tart is a close cousin of my favorite purple lipstick, Maybelline Brazen Berry. 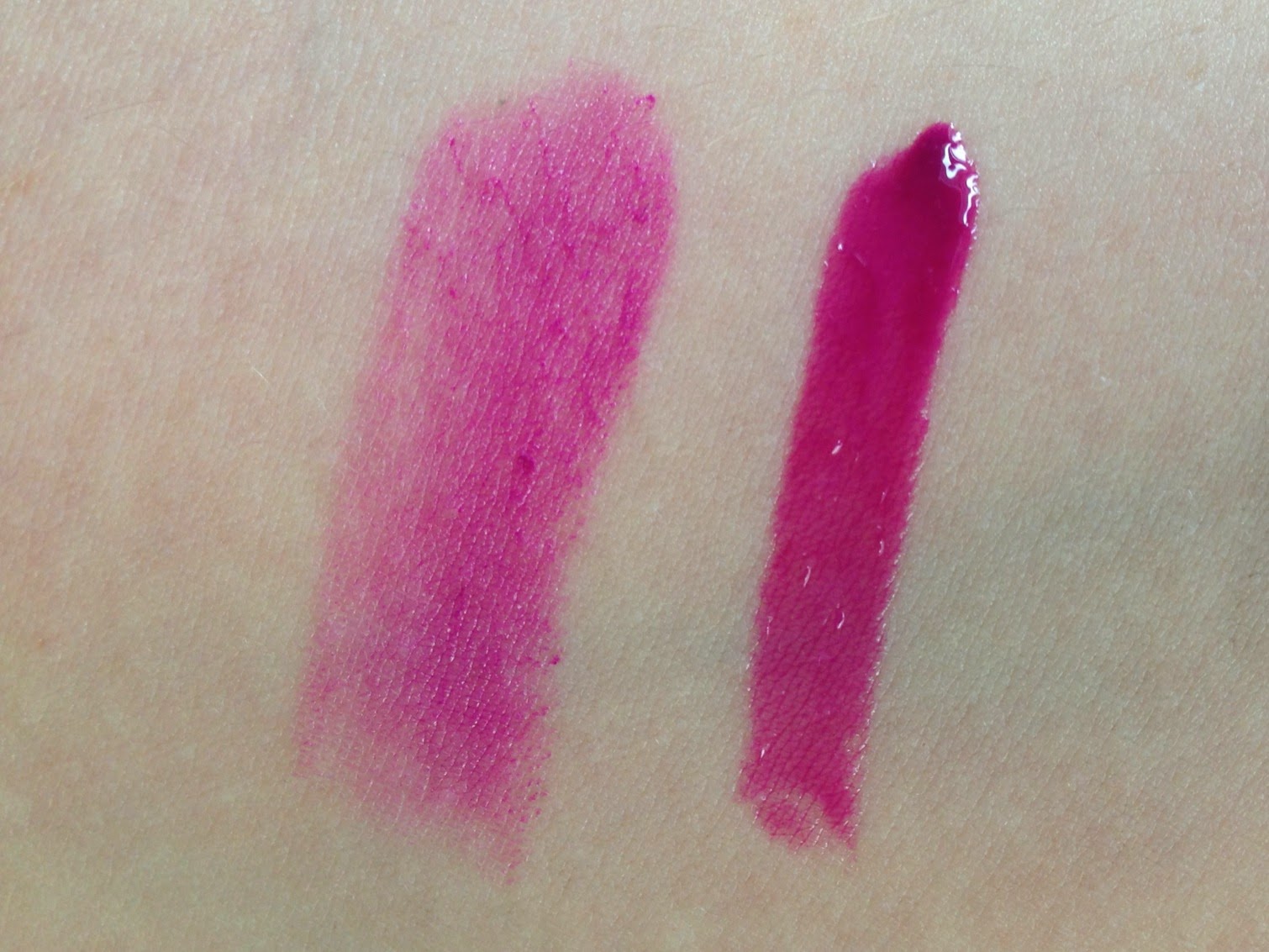 I rarely layer glosses over lipsticks, but Raspberry Tart and Brazen Berry are perfect layering partners: 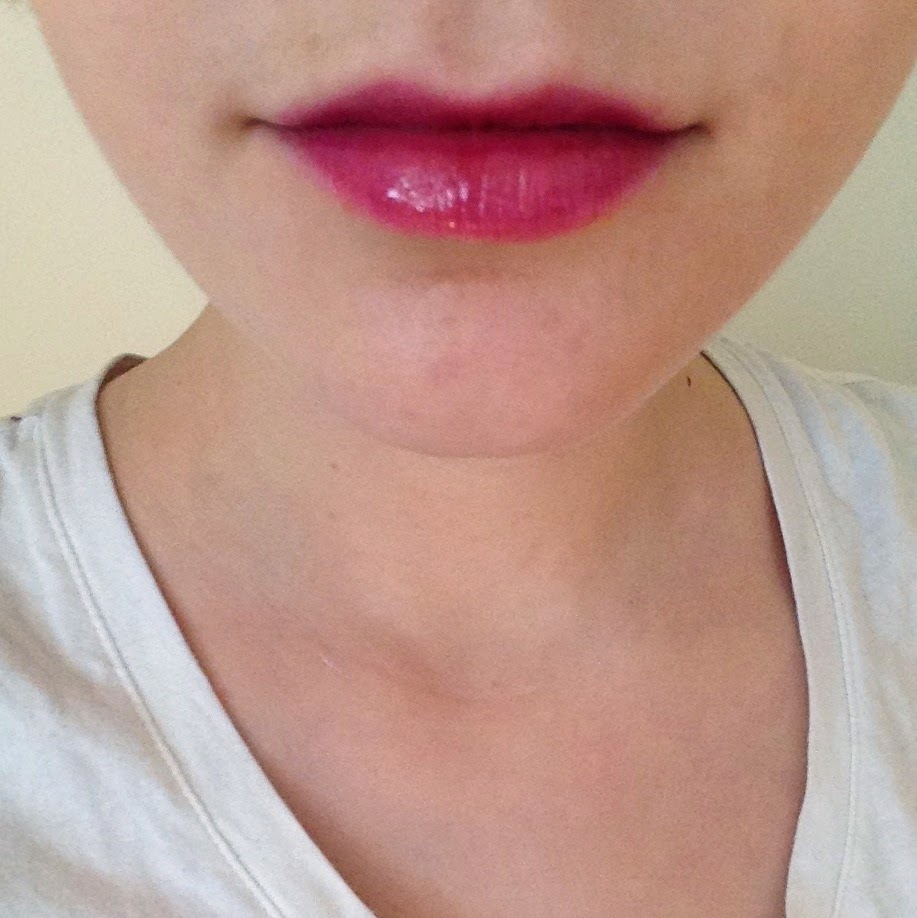 Finally, two use-all-the-things looks. The first was loosely inspired by the third look from Kate's post about Suqqu's Touryokuzora eyeshadow quad; I love the combination of dirty messy olive and clear jelly peach. You're welcome for my decision to conceal the terrible, terrible hair I had that day. Knight blended with NARS Lhasa (lavender taupe) on the upper lid, then smudged on the lower lashline; Peach Cobbler on lips. 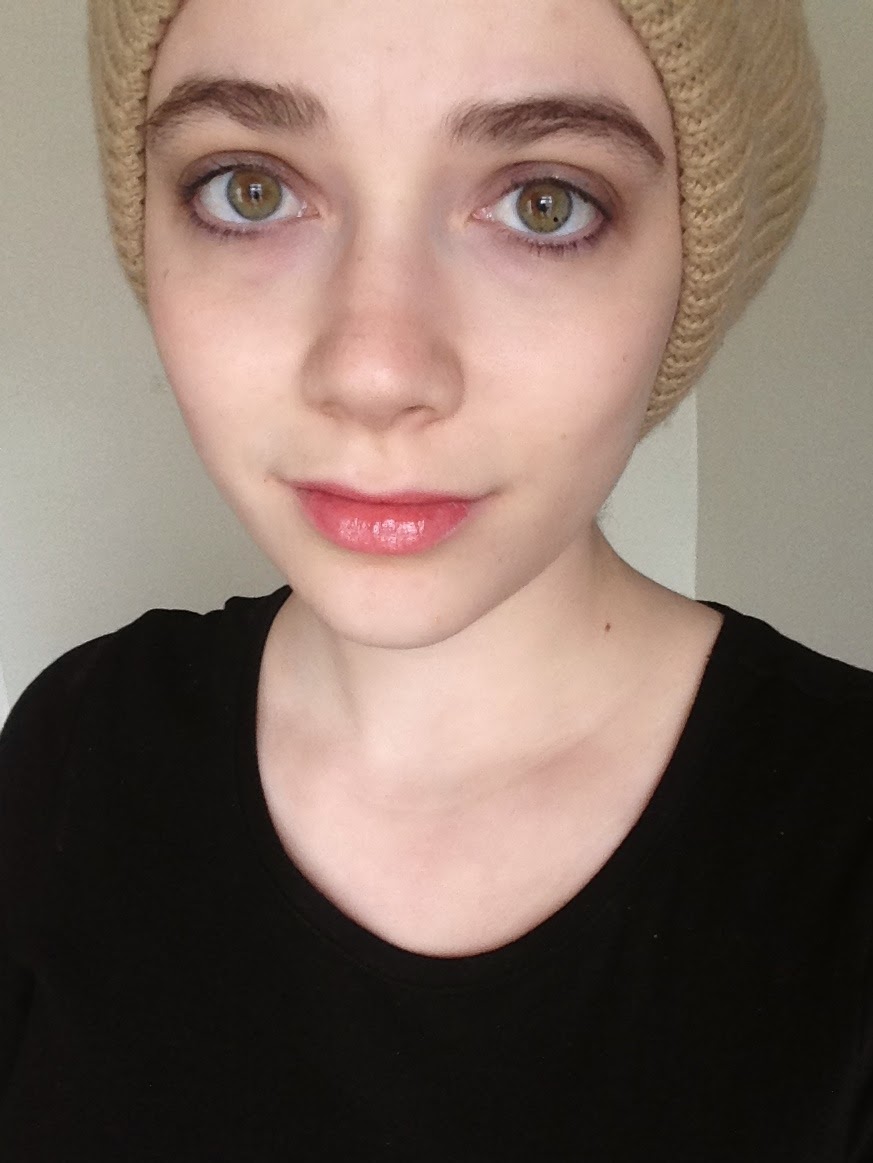 Similar placement, different shades: Maybelline cream eyeshadow in Bad to the Bronze all over the mobile lid, Jewel smudged on the upper and lower lashlines, Raspberry Tart on lips. 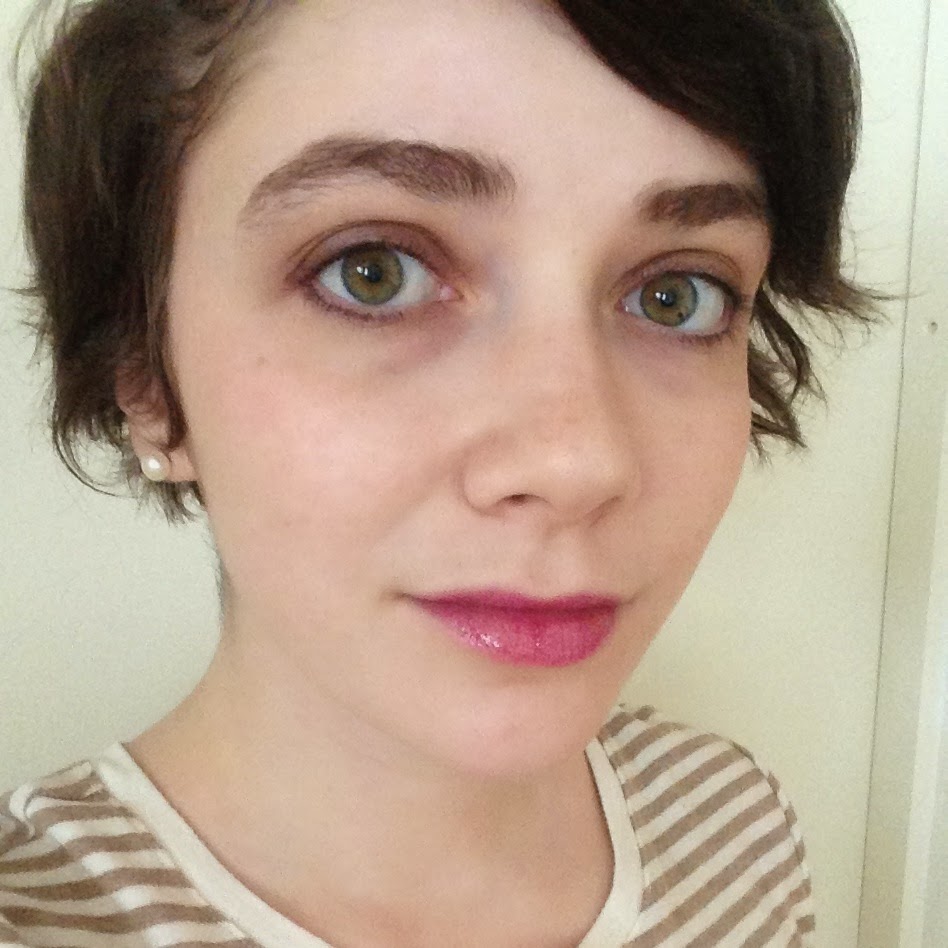 Finally, the makeup I wore last night to Waiting for Godot in New York; apologies for weird hotel lighting. I can't break my Lhasa habit, but this time I smudged Jewel on the upper and lower lashlines instead. I found that the NYX primer made Lhasa apply more evenly and opaquely, though it didn't seem to lengthen the life of my eye makeup to any dramatic degree. Lipstick is my HG matte red, NARS Velvet Matte Lip Pencil in Mysterious Red. Overall, I'm very pleased with my new NYX purchases. I'd love to try more of their eyeliners, and though I'm observing a moratorium on lip color for the near future, something tells me that at least one more Butter Gloss will end up in my collection before long. Just a feeling I have.
Posted by auxiliary beauty at 10:01 PM