Milani Showy Sea-Green nail polish, new this spring, is the Holy Roman Empire of polishes: neither showy nor sea-green. It is, however, extremely pretty. 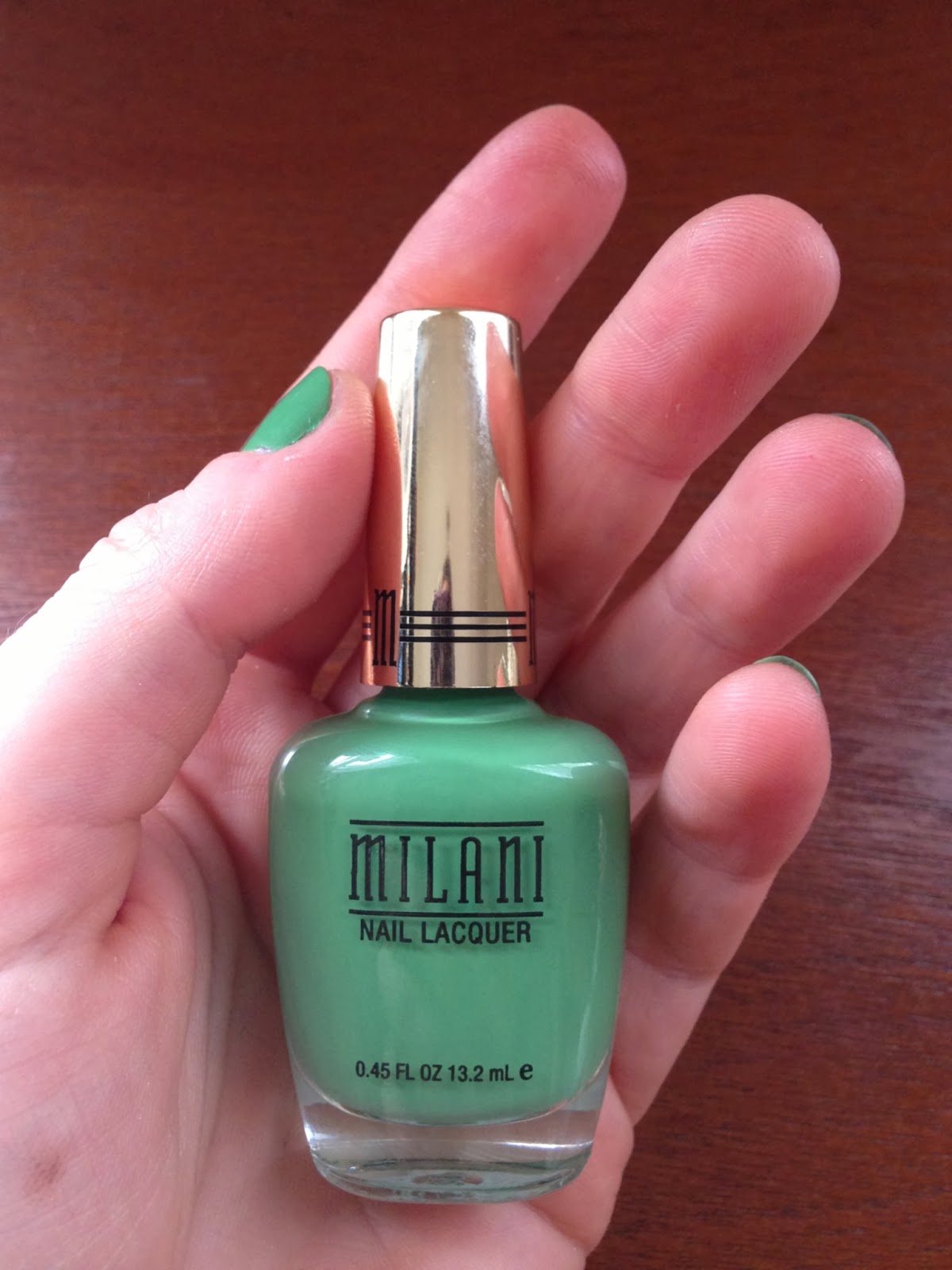 To me, "sea-green" implies something brighter and bluer; this is a muted, slightly dusty jade or pistachio green, a very unusual color for a nail polish. I can't think of another polish in this particular shade of green, though SSG does seem to resemble Burberry's new Sage Green polish. The Burberry is darker, but it shares that slight dustiness. SSG is not mint, either. Come spring, every brand seems to put out a mint-green or turquoise polish, but I've placed Showy Sea-Green next to a conventional mint color (Urban Outfitters Smush) to show you just how un-minty it really is: 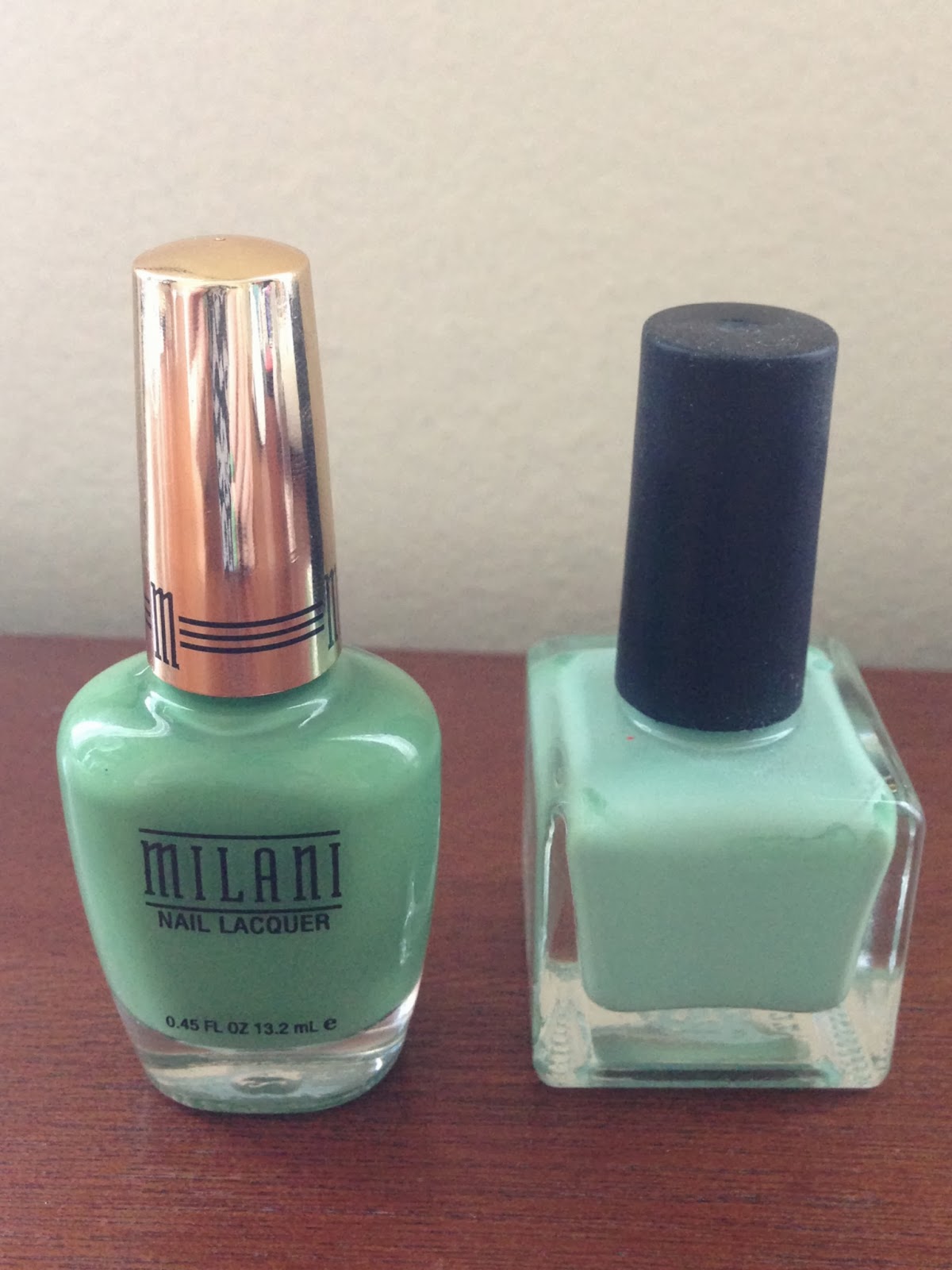 See? Less white, less blue. This must be the reason that SSG, unlike most pale-green polishes, doesn't quite (the devil's in that "quite") give me the gruesome lobster-hands effect. Mint polishes tend to pull out the red tones in my hands, but I mostly avoid that fate with SSG. It's not as flattering as a red or berry, but what green is?

Taken outside, on an overcast morning: 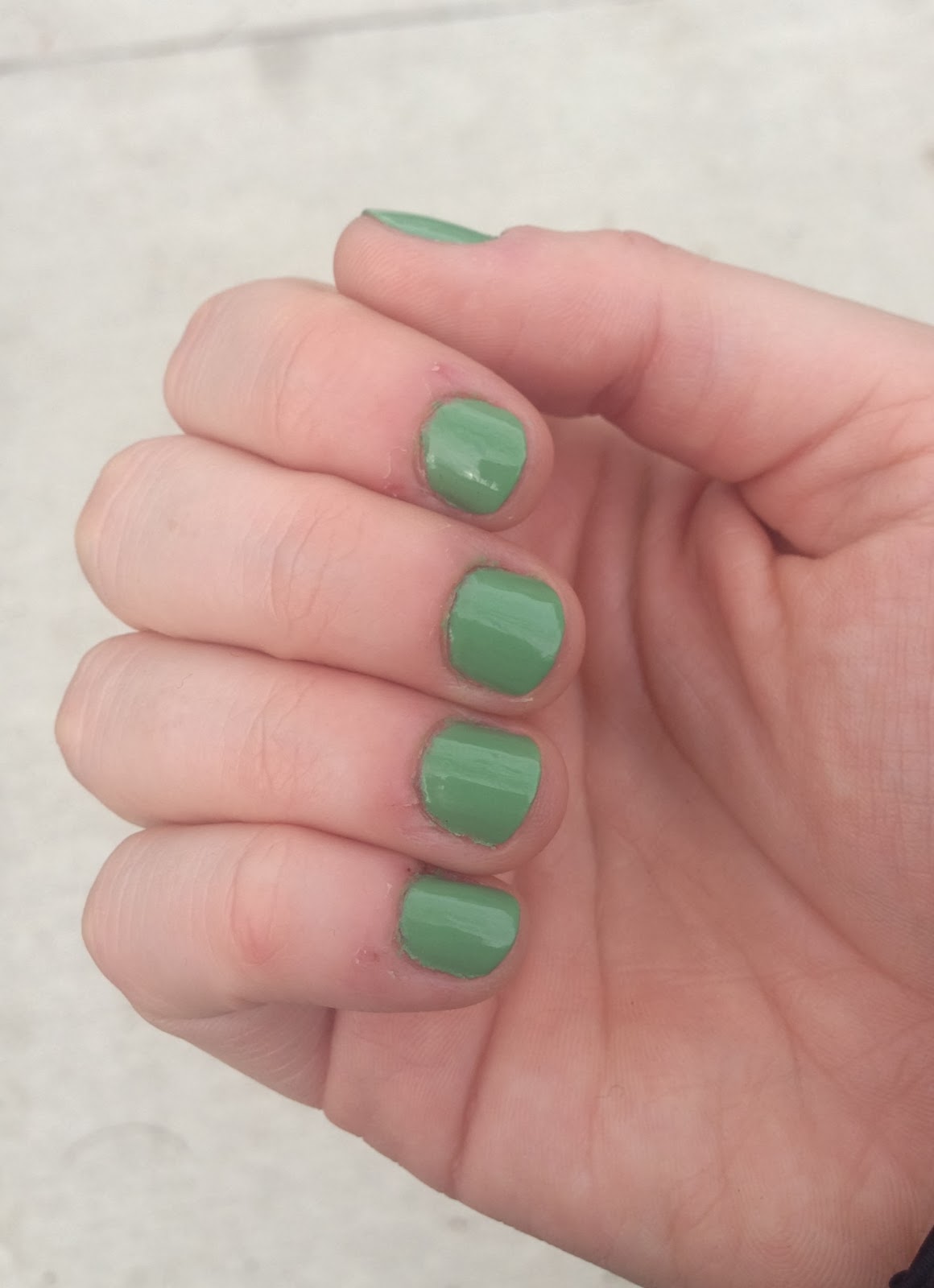 In direct natural light, the green looks brighter and my hands, alas, redder: 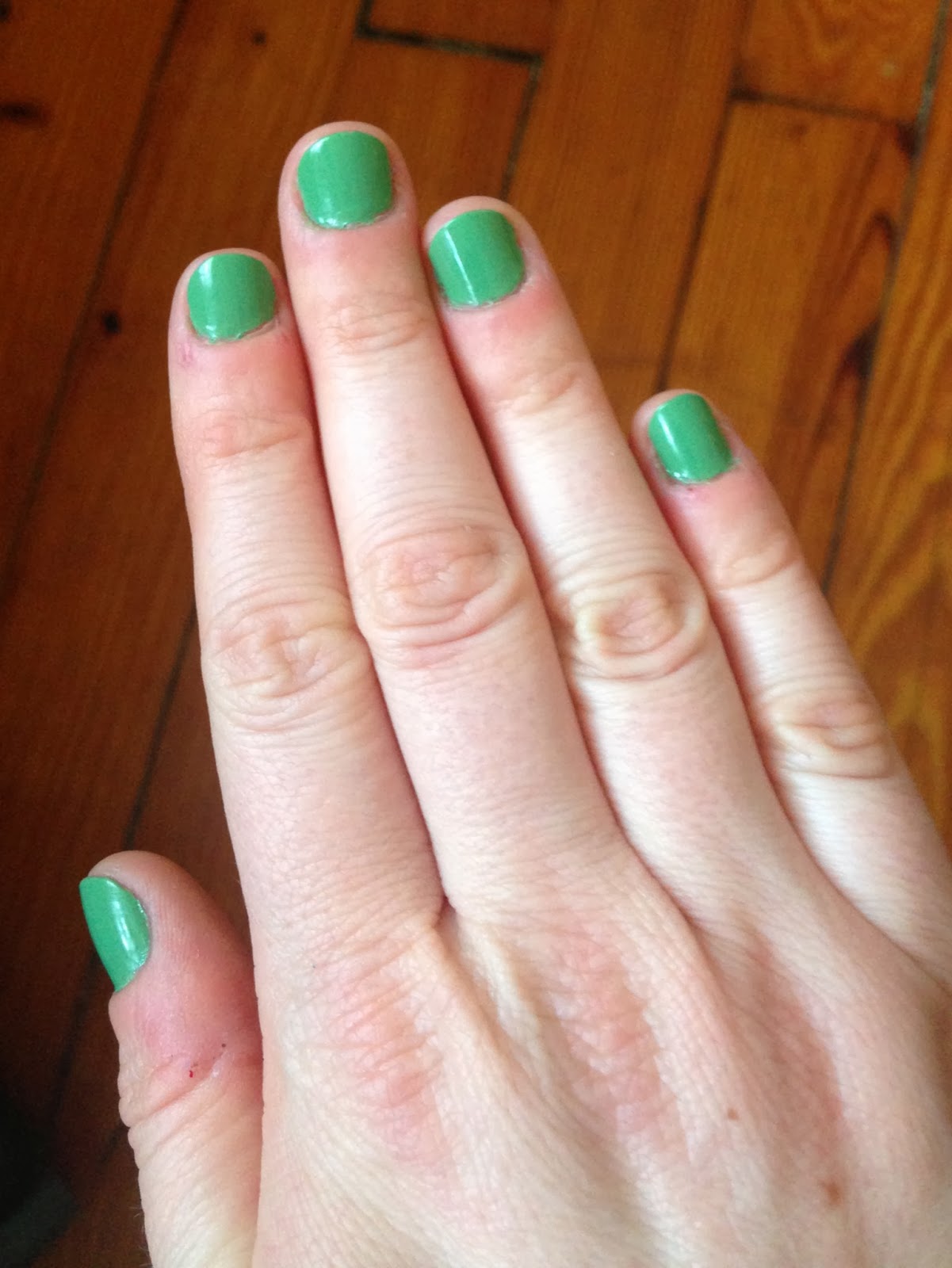 Formula-wise, it's good but not spectacular. SSG is completely opaque in three thin coats; you might get away with two thicker coats, but two thin ones looked a bit streaky. I'm not a huge fan of Milani's brushes, which are stiff and wide and tend to pick up too much polish for my taste, but they still get the job done. I've been wearing the polish for a day and a half (plus a base coat and topcoat), and it looks perfect, despite a couple of vigorous dishwashing sessions. That's more than I can say for quite a few formulas, including some very expensive ones--though I guess I shouldn't be surprised that Chanel nail polishes aren't made to withstand pot-scrubbing.

Along with the lovely weather we've been having these past few days, this shade of green is putting me in a delightfully vernal mood. And look what I found on my way home yesterday: 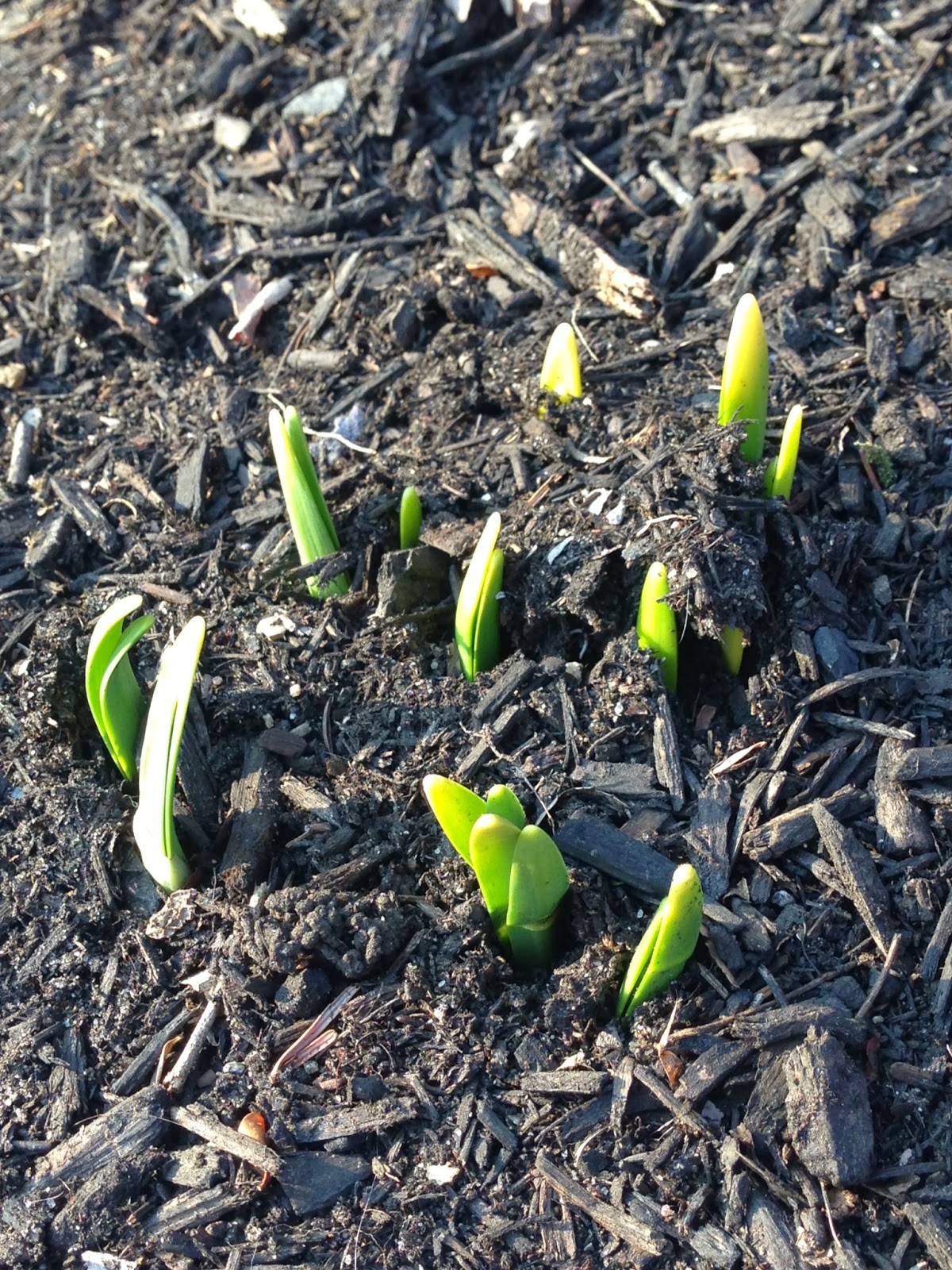 While we're on the subject of delightful yellow-green things, I should mention that Showy Sea-Green almost matches the pistachio cookies from the Italian deli near my apartment. I doubt they're made anywhere in the vicinity of real pistachios, but they are very tasty. 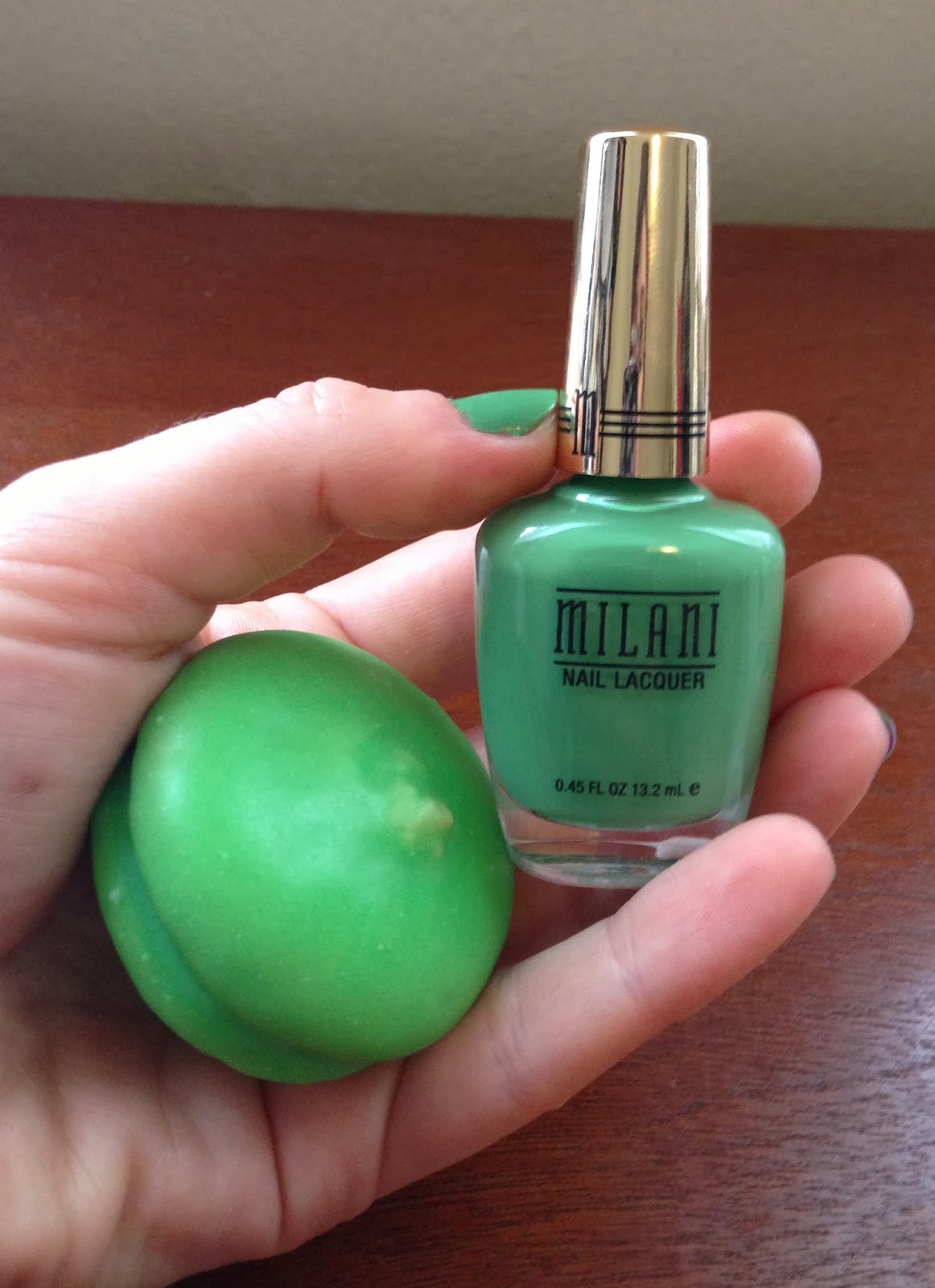 This photo was surprisingly hard to take: it turns out that holding a cookie and a bottle of nail polish in one hand is not a natural action. Guess what I ate to reward myself.
Posted by auxiliary beauty at 2:00 PM