In my review of NARS Lhasa, I mentioned that I have several under-the-radar beauty staples, products I use so often I've stopped thinking about them. I thought I'd follow up on that post with a review of another product I use almost every day: NARS blush in Mata Hari, a cool-toned dusty pink with faint plum undertones. Mata Hari is not a cult favorite like Orgasm; in fact, one of my favorite beauty bloggers has dubbed it an "Unsung Hero." How fitting that a blush named after a spy should evade the notice of devoted NARS fans. 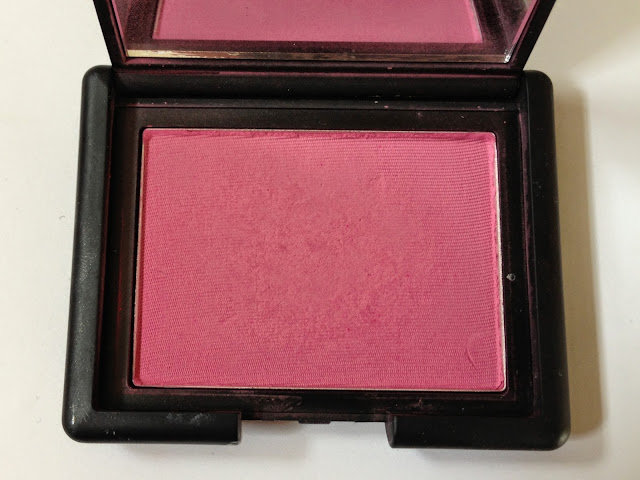 In shade, as spies prefer.

I suspect Mata Hari has kept such a low profile because it's neither a fluorescent statement blush like Exhibit A nor a neutral blush like Douceur. Thinking about these two color categories makes me want to break out my long-dormant Japanese: Mata Hari walks the line between 地味 and 派手, between jimi (understated) and hade (showy). It belongs to a liminal category: bright enough to get noticed, subtle enough to go unremarked upon. And what is the word, English or Japanese, for that? 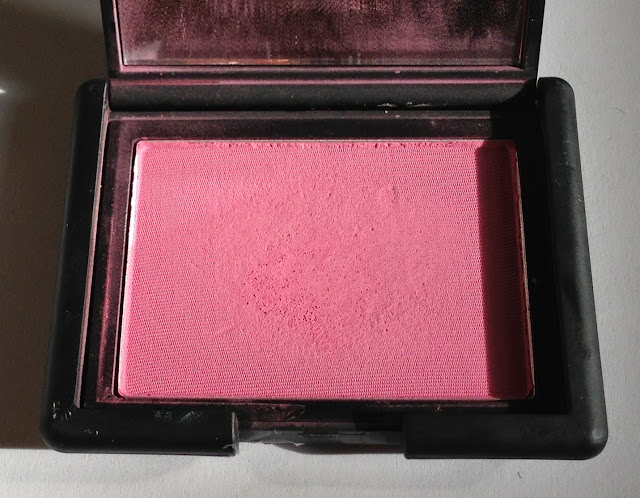 Swatched on my ghostly inner arm, Mata Hari is a beautiful candy pink, slightly more hade than it looks in the pan: 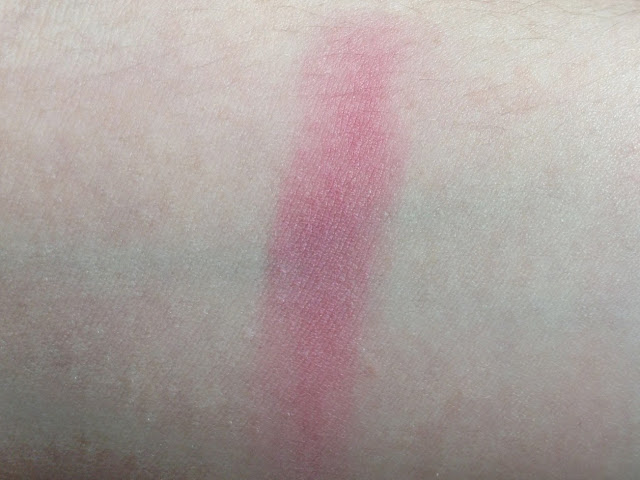 The NARS powder blush formula has been reviewed so often and so positively that I feel silly adding my equally positive opinion to the chorus, but I will anyway. (Isn't that the distinguishing characteristic of a literature scholar--the willingness to cover themes that hundreds of people have already exhausted?) Mata Hari is very pigmented, but it can be applied sheerly for a natural-looking flush; the swatch above is three passes, which is more built-up than I'd ever wear it. It blends beautifully, too. I can't speak to longevity, because I tend to apply very little in the first place, so whether it fades or not is kind of an open question.

I swear I piled on far more blush than usual for my face swatch, but it barely shows up in the photo. Does anyone else have this problem? (Also on my face: NARS Habanera eyeshadow duo, NYX Butter Gloss in Peach Cobbler, spring freckles.) 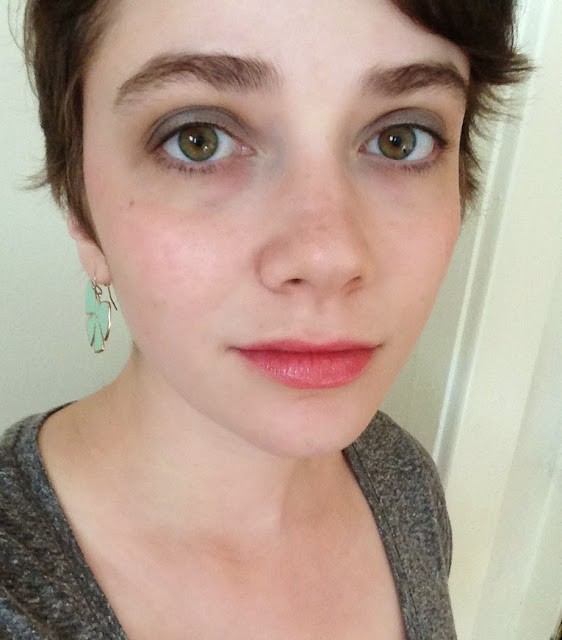 Now for the second question of balance or, rather, imbalance: the wild imbalance of my makeup stash.

I own dozens of lip colors and nail polishes, over 50 of each. But the rest of my collection is small by normal-person standards, never mind beauty-blogger standards: four eyeliners (one black pencil, one black liquid, two colored pencils); a few single eyeshadows and one neutral eyeshadow palette; one mascara; three blushes, including Mata Hari. There are some product categories I haven't even touched, like bronzer and highlighter. The built-in shelves in my bedroom tell a sad tale of favoritism (the green-and-blue boxes are for lipsticks, the jar to their right for glosses): 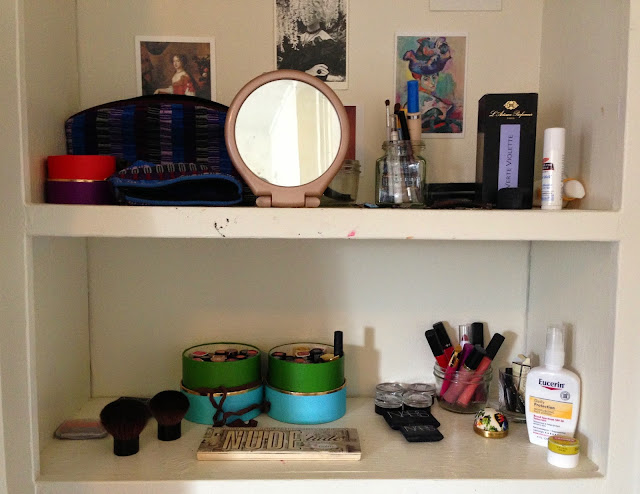 What I should have done long ago, of course, was stop buying lipstick and nail polish and use the money I saved to build up my shadow and blush collections. Instead, I used my relative restraint in those categories to justify buying yet more lipsticks and nail polishes. Logical, I am. 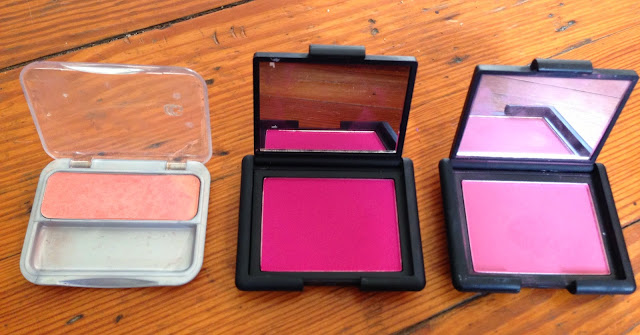 That's my entire blush collection. The peach is my very first blush (sniff!), the powdery-perfumey CoverGirl Rose Silk, which I almost never wear. The fluoro magenta is NARS Coeur Battant, a limited-edition blush from the 2013 holiday collection.

I've always understood other people's obsession with eyeshadow: an infinite array of colors and finishes, and a whole world of geometric tricks for shaping and placing and blending. Until recently, though, I couldn't see what motivated anyone to collect dozens of blushes. It didn't seem to make sense: didn't they all look the same sheered out on the cheeks? My bafflement originated in my greatest beauty fear: the fear of the "full face," of looking too "done." I like my makeup a little blurry and imprecise. I don't want all the made-up bits of my face to be connected; I don't want to look airbrushed. I want to see bare, imperfect skin between eyeshadow and blush, blush and lipstick. I want an archipelago of colors and textures in a sea of un-made-up epidermis. (Actually, that sounds creepy. Just bear with me.)

But my attitude toward blush has been changing, due partly to Kate's Japanese-inspired experiments with blush placement (e.g. here), and partly to my growing awareness of the variety of colors and textures and finishes available. I suspect I'm entering a blush period. Check back here in a few months.

One more view of Mata Hari, mostly to show off my Easterish earrings: 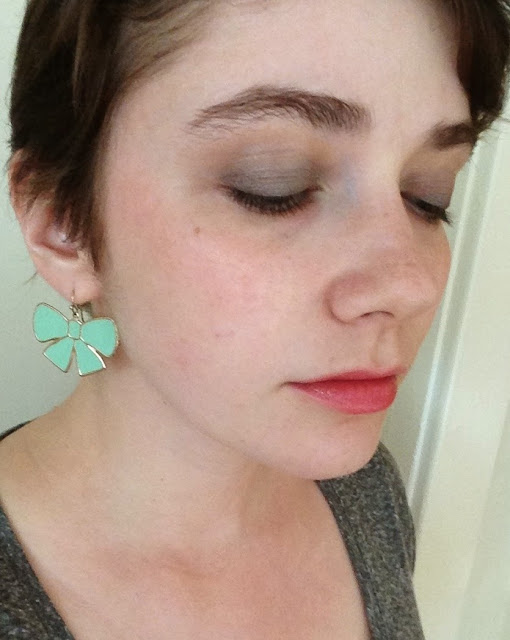 And one more question of balance: how do you make sure you've applied an equal amount of blush to both cheeks? Bilateral symmetry gets me every time.
Posted by auxiliary beauty at 5:48 PM