“His life was a constant war with insensate objects that fell apart, or attacked him, or refused to function, or viciously got themselves lost as soon as they entered the sphere of his existence.”

This is Vladimir Nabokov's description of Professor Timofey Pnin, the hapless protagonist of Pnin (1957), but it is also a perfect description of me. I am very, very absent-minded. If I'm asked to do two things at once, my brain will simply refuse to focus on one of those tasks, which means that any object involved in that task runs the risk of getting lost. Sometimes that object is a lipstick. And the more I use any given lipstick, the greater the chance that I will leave it at a coffee shop or in a library bathroom. Which explains why I found myself at CVS two days ago, repurchasing two of my favorite neutral lipsticks, both by Revlon: a Lip Butter in Pink Truffle and a Colorburst Matte Balm in Sultry. I'd had Pink Truffle for nearly a year and had used up most of it before it went missing, but the defection of Sultry really hurt. I'd bought it on the first day of 2014, after searching what felt like every drugstore in San Francisco, where I'd been visiting my parents during winter vacation. It was my first purchase of the new year, and a long-sought-after one, and yet I managed to lose it within two months (along with three identical pairs of cheap sunglasses, each one bought to replace the last). 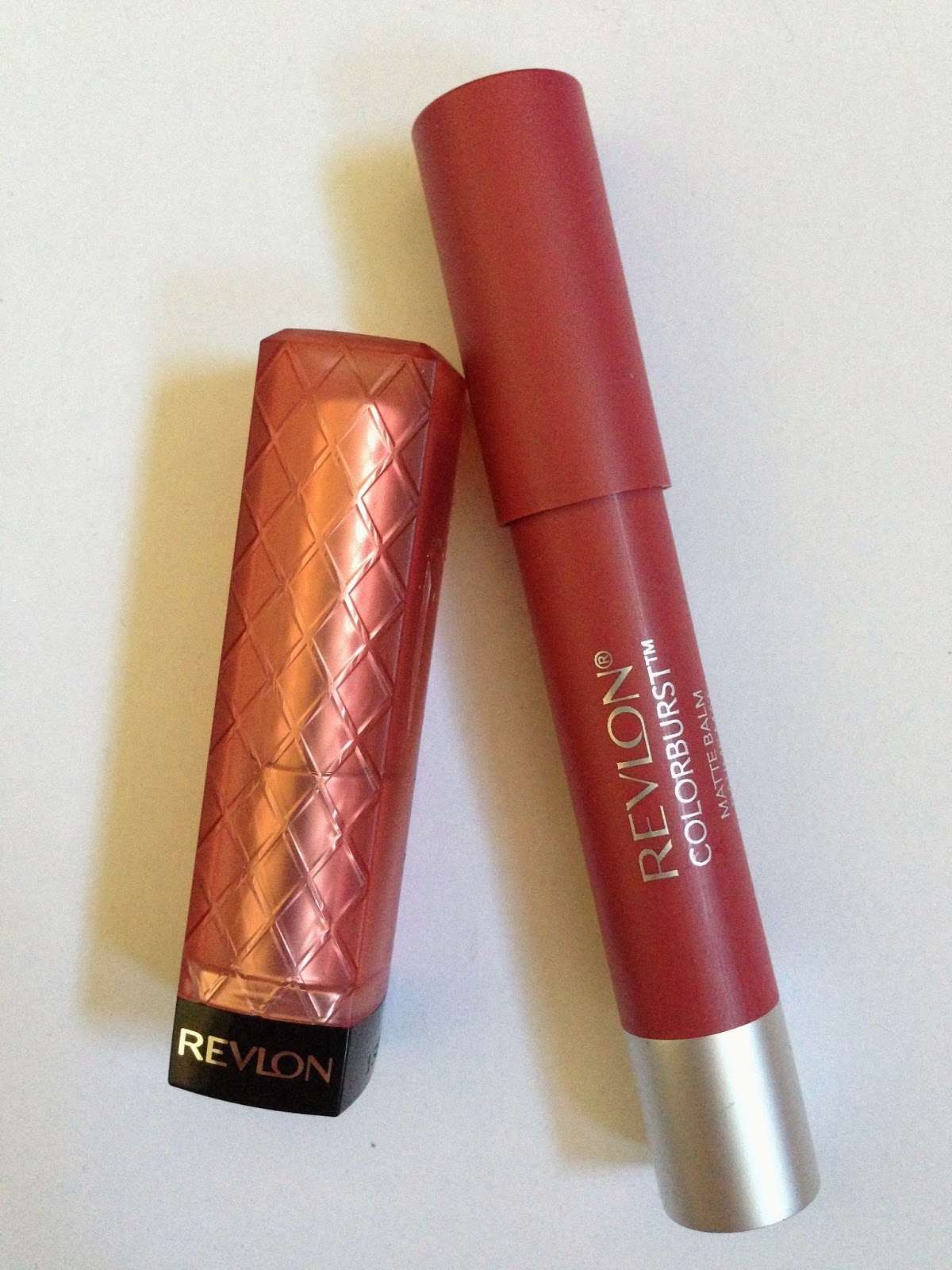 (Pink Truffle on the left, Sultry on the right.)

But there was nothing to be done. Back on the East Coast, I paid a visit to my local CVS, with which I've had a love-hate relationship for three and a half years. Love, because it was my chief source of goodies in the early days of my makeup obsession. Hate, because...well. We've all bought embarrassing items at the drugstore. We've all hesitated in the aisle, cringing at the thought of fumbling for change while those items lie on the counter, laid bare to the gaze of the cashier. And we've all reassured ourselves that drugstore employees are like doctors: they see so many embarrassing purchases that they've long since stopped noticing, say, pregnancy tests or boxes of glow-in-the-dark condoms.

Except that the cashiers at my CVS have not stopped noticing. In fact, they notice what you're buying even when you're using the recently installed (and frequently malfunctioning) self-checkout machines. A few months ago, my boyfriend was buying some toilet paper at one of the machines when a man appeared at his shoulder and remarked that he should really go for the larger pack if he wanted to save. So I guess I shouldn't have been surprised, first, that the self-checkout machine wouldn't accept my coupon for the lipsticks; second, that when I went to pay for them at the counter, the male cashier held them up and observed, "These are the same color." 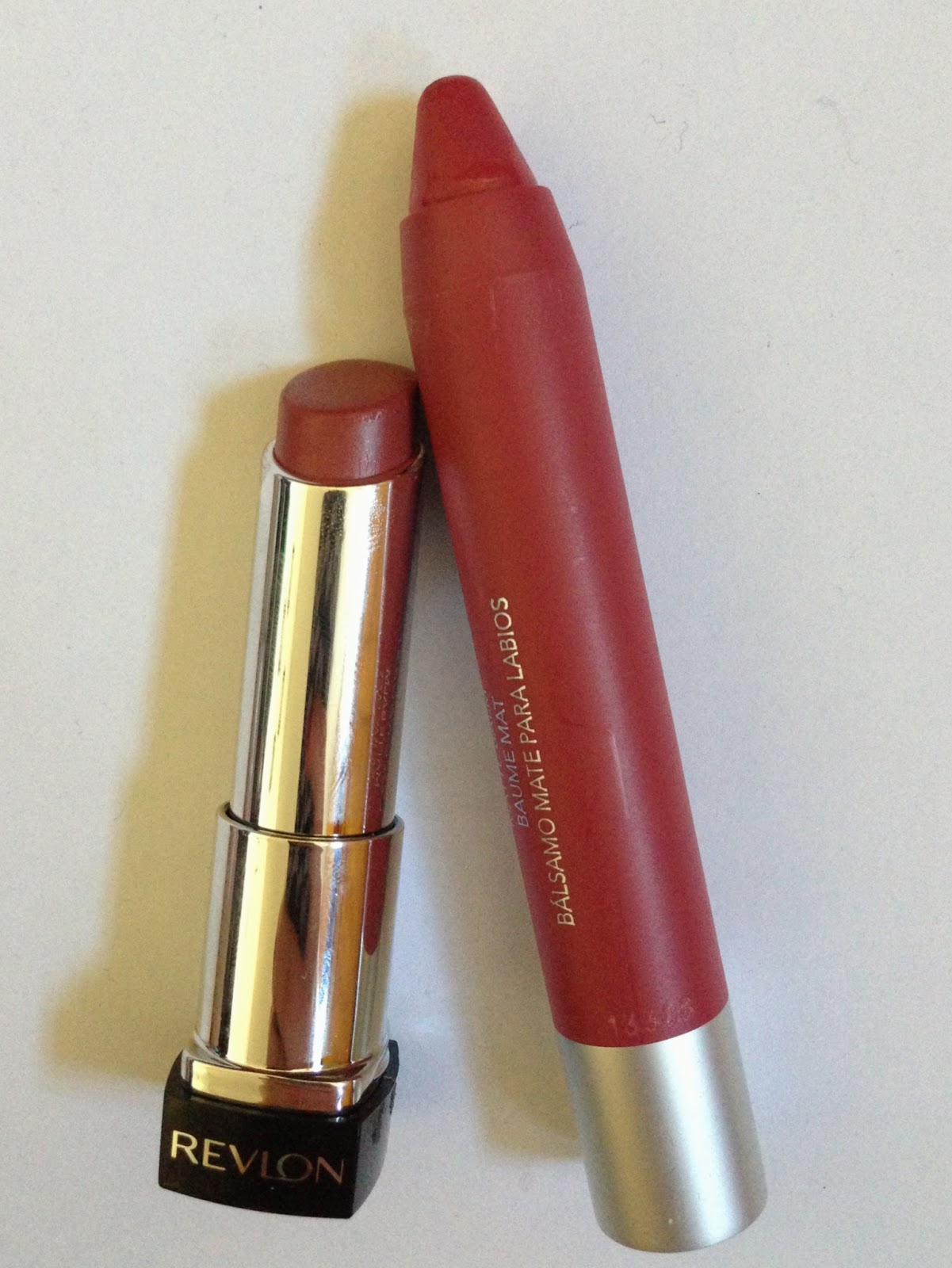 As patronizing as his comment was, I kind of loved him for it. I loved that it wasn't a routine, heartless retail transaction for either of us: he felt that he had to protect me from my own poor fiscal decisions, and I felt confirmed in my attachment to these lipsticks. Because they are not the same color. Not just by beauty-blogger standards, but also by non-makeup-wearing-man standards: 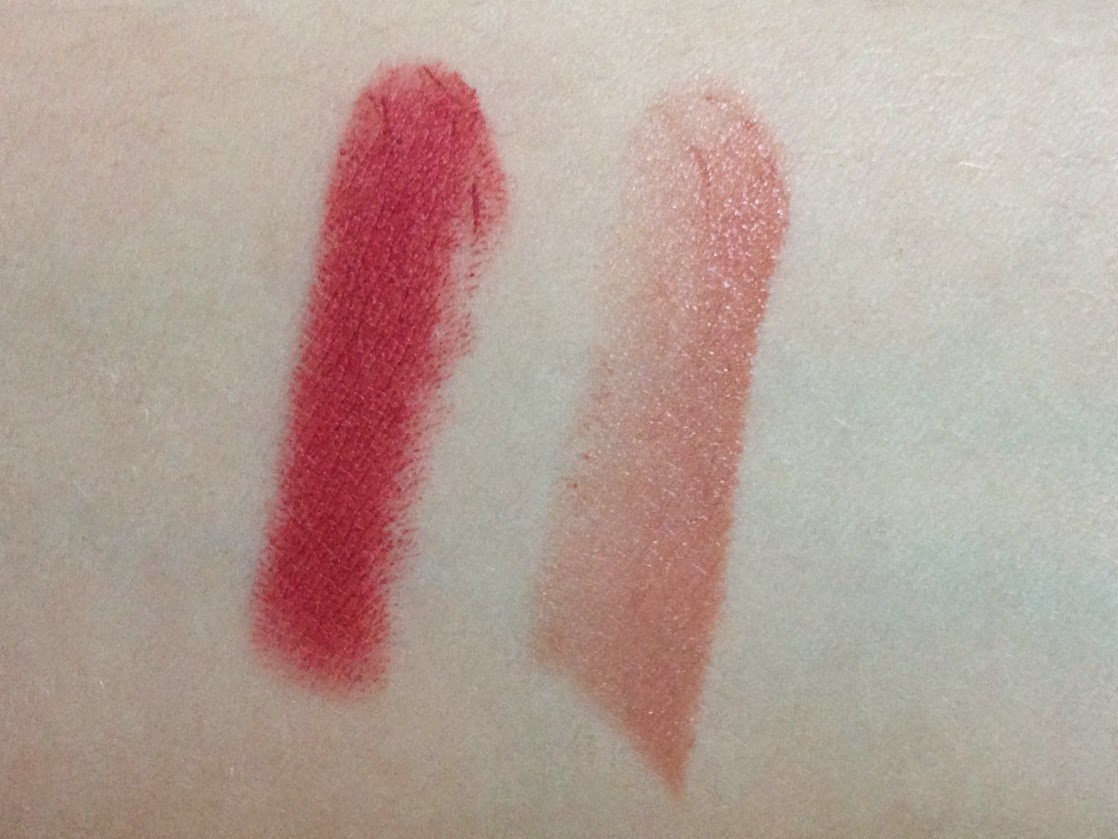 (Sultry on the left, Pink Truffle on the right.)

Pink Truffle is a semi-sheer mauve-nude. It's been hailed as a dupe for my favorite MLBB lipstick, NARS Sheer Lipstick in Dolce Vita, but I see them as very different. "Very different" by beauty-blogger standards, perhaps, but there are worse standards to have. 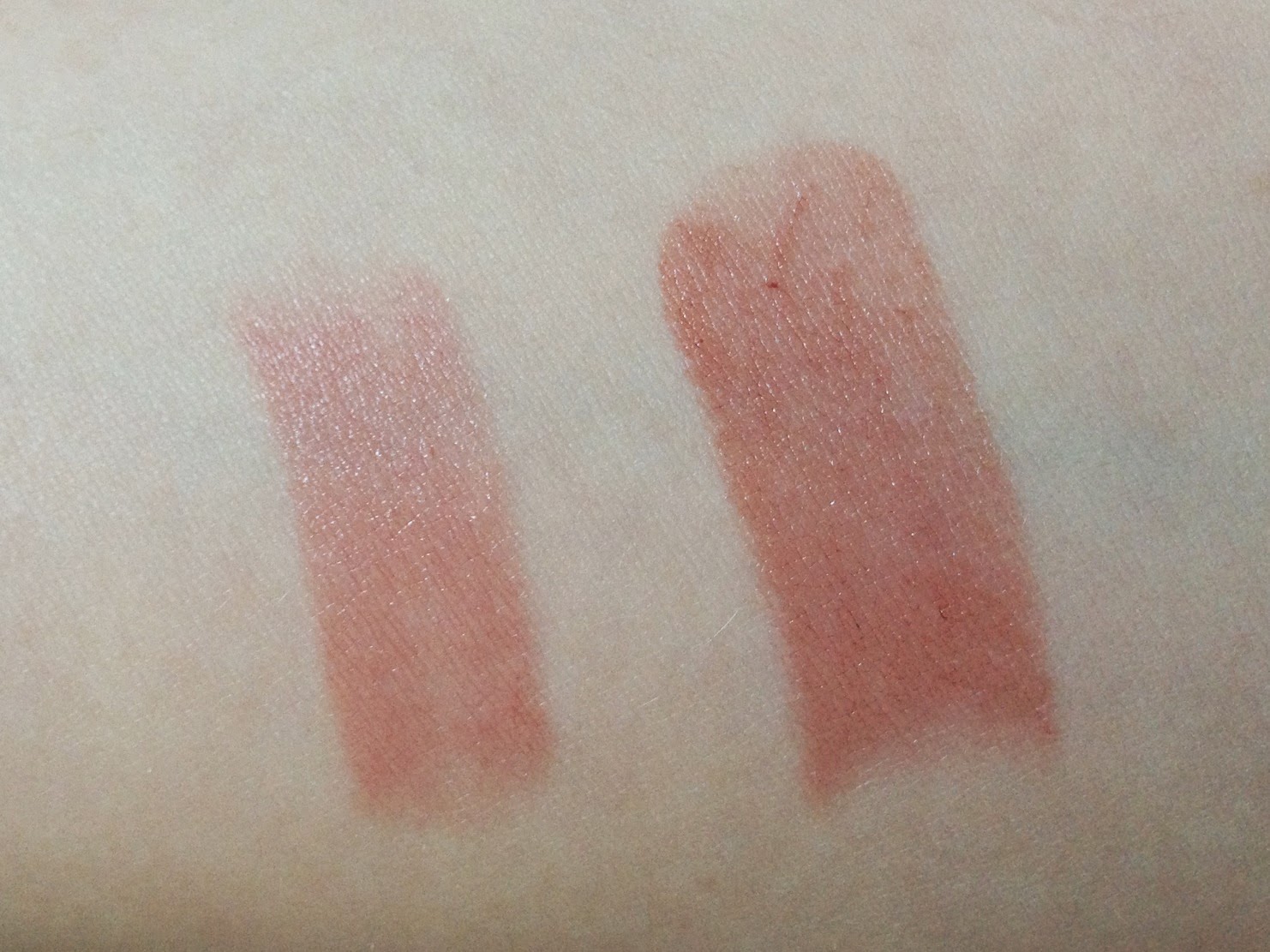 Dolce Vita (left) is sheerer, pinker, and cooler; I also find it more hydrating. Pink Truffle (right) is deeper, browner, and more pigmented, and a little drying. What I want more than anything in the cosmetic universe is a lipstick with the color and hydration of Dolce Vita and the coverage of Pink Truffle. Suggestions welcome, of course. 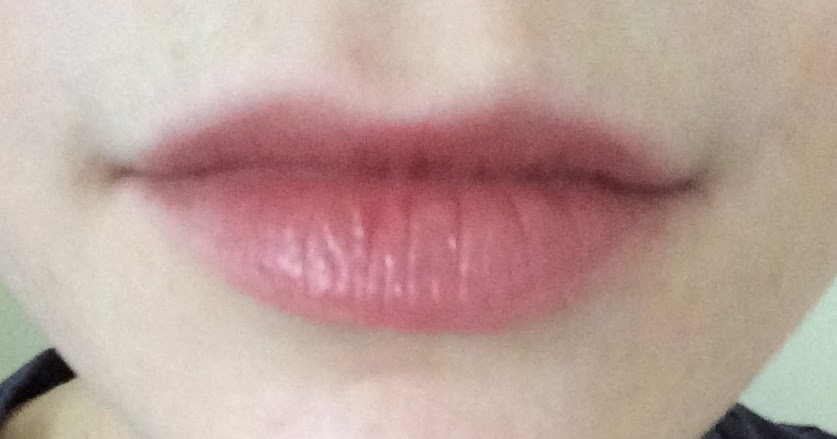 My lips, naturally a cool-toned mauve, tend to eat the brown tones in lipstick. (I'd post a photo of my naked lips, but they're so dry that I can't in good conscience inflict an image of them on the unsuspecting internets.) Pink Truffle looks almost beige when swatched on my arm, but on my lips it transforms into a soft, pretty rose. 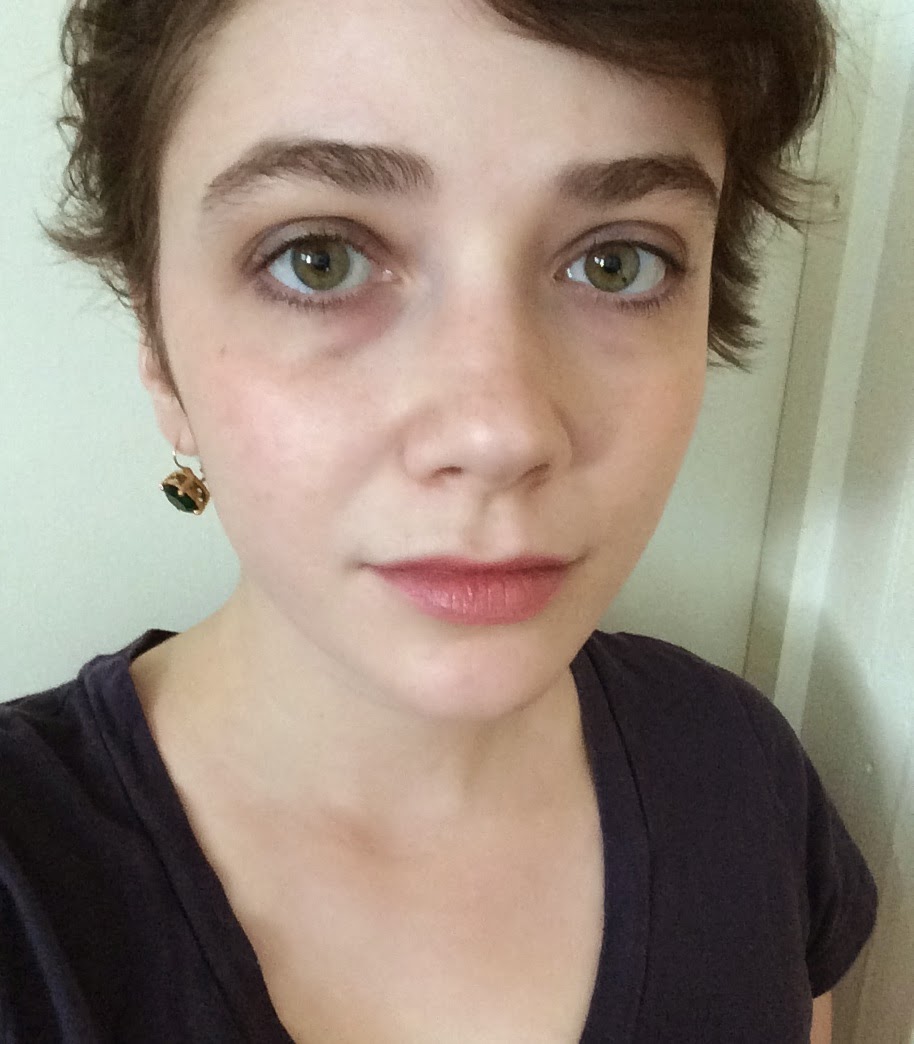 If I look a little grim, it's because I've spent three days fighting what is either a cold or bad early-spring allergies. My head is a ball of itch and ooze.

Sultry is a very hard color to classify. I'd describe it as a dark rose, with berry and brown undertones. In some lights, it looks brick-red; in others, it's a subdued deep pink, or burgundy, or or or. I love colors that keep you guessing. As with Pink Truffle, I find that the brownness disappears on my lips. Sultry strikes a perfect balance between neutral and statement lipstick; it's far from nude, but still eminently tasteful. 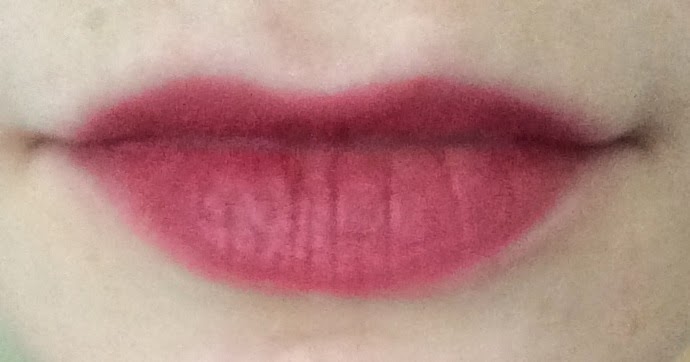 Unfortunately, the phrase "matte balm" implies a level of hydration that Sultry doesn't deliver. It is very soft for a matte formula, gliding easily across the lips, but I do find it drying without a thin layer of lip balm underneath. Oddly, though, it disguises the chronic dryness of my lips; I attribute this to the fact that it's not a completely flat matte, but has a subtle shine. 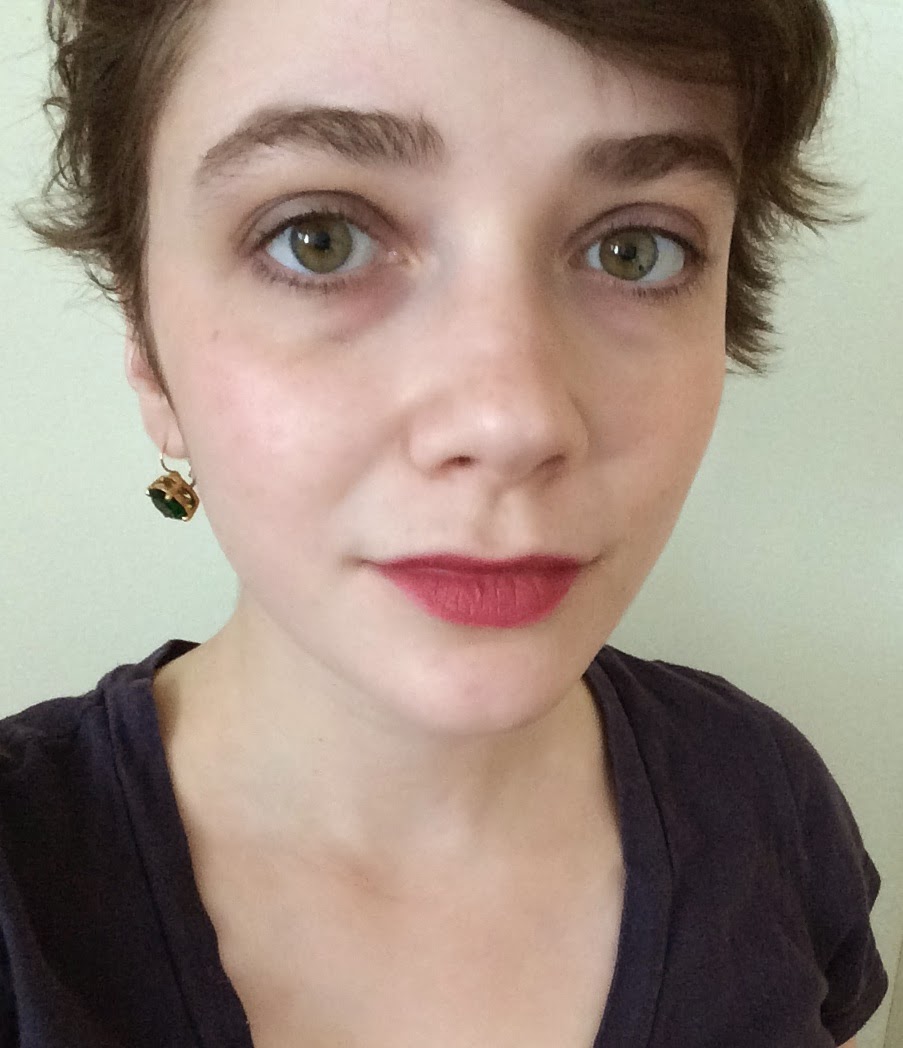 It won't outlast a meal, but it wears for a few hours (and a few drinks), turning into this:

(Photo taken three months ago on a flight from Chicago to Newark, because I'm just that dedicated to documenting the shifts and fades of my favorite lipsticks.)

The only other Colorburst Matte Balm I've tried is Shameless, a dark blue-based purple. Sylirael wears it beautifully here, but it was a fail for me, applying unevenly and clinging to the dry bits of my lips. I wasn't excited enough about the color to try and make it work, so back it went to the drugstore. The rest of the Matte Balm line doesn't really tempt me, dominated as it is by orange. I hope Revlon eventually comes out with more shades in the Matte Balm range, as they did with the Lip Butters. For now, though, I'm happy with Sultry. And with Pink Truffle, which looks nothing like Sultry. Like, at all.
Posted by auxiliary beauty at 11:51 AM