Sorry for the infrequent posting recently! No sooner had I recovered from jet lag and returned from my conference in York than I was felled by a bad cold. It's now been six days; the fever is long gone, but the hacking cough and general malaise remain. We went to Oxford yesterday, my first time back since I finished my study-abroad year in 2008, and though it was a glorious sunny day of cathedral-climbing and ice cream and Pimm's, I exerted myself more than I should have. And now I have to write another conference paper by next Saturday, which is plenty of time but would feel less daunting if I were less sick.

I mentioned that I'd bought two Barry M nail polishes: Sugar Apple, a bright pastel aqua, and Shocking Pink, a fuchsia that always photographs too warm, despite my best efforts. I trust I don't have to tell you which is which: 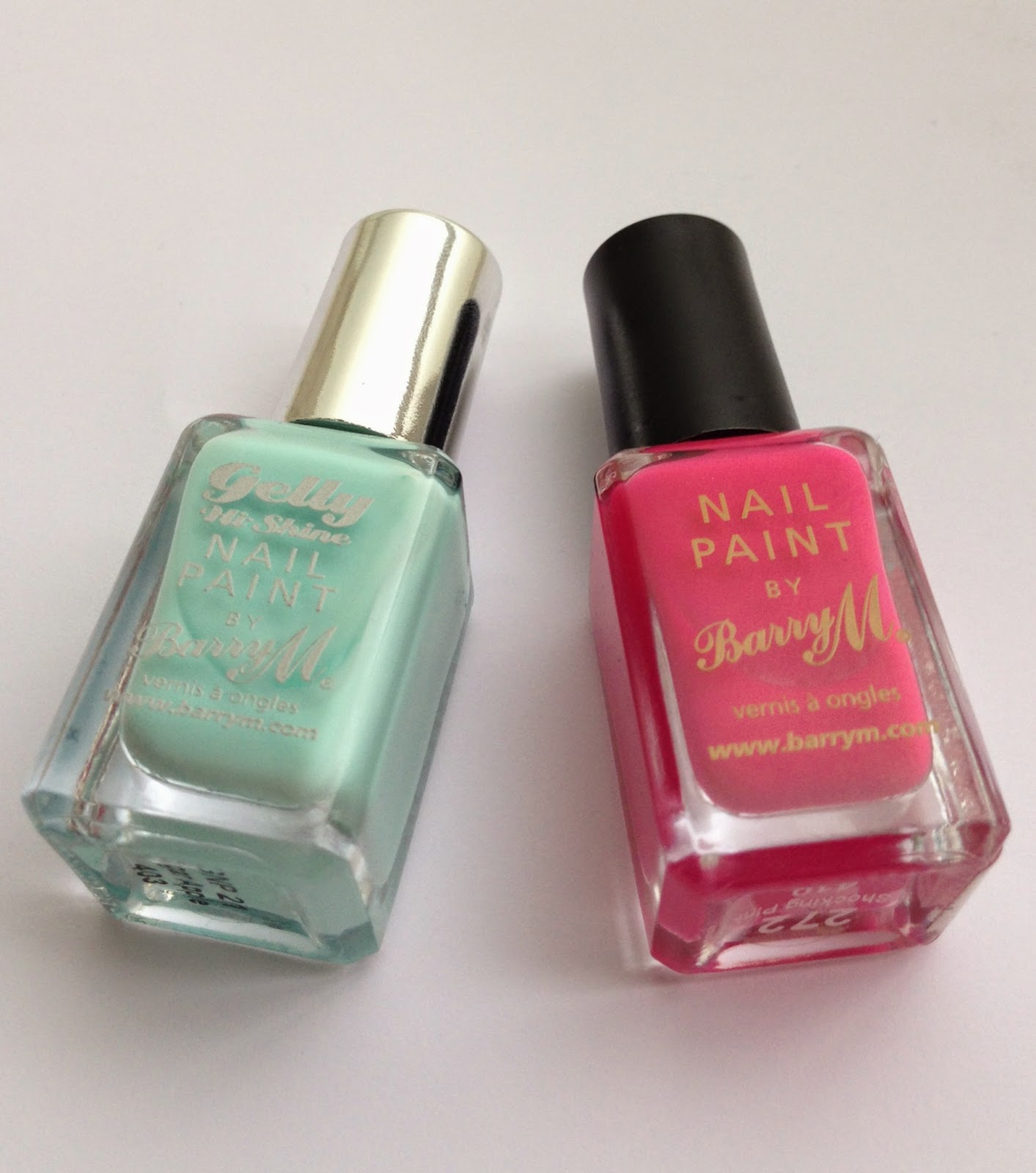 Sugar Apple is part of Barry M's "Gelly Hi-Shine" line, which implies that the polish will have, well, a jelly texture and a high shine even without topcoat. No and no. It's a standard white-based pastel polish: opaque in three coats and slightly matte before topcoat (I use Revlon Quick-Dry, though my bottle is getting old and tending more toward Slow-Dry). Despite these false claims, Sugar Apple is a great polish. It applies easily, dries quickly, and wears well. Most nail polishes chip within two days on me, but Sugar Apple lasted nearly three days with no flaws before I removed it. 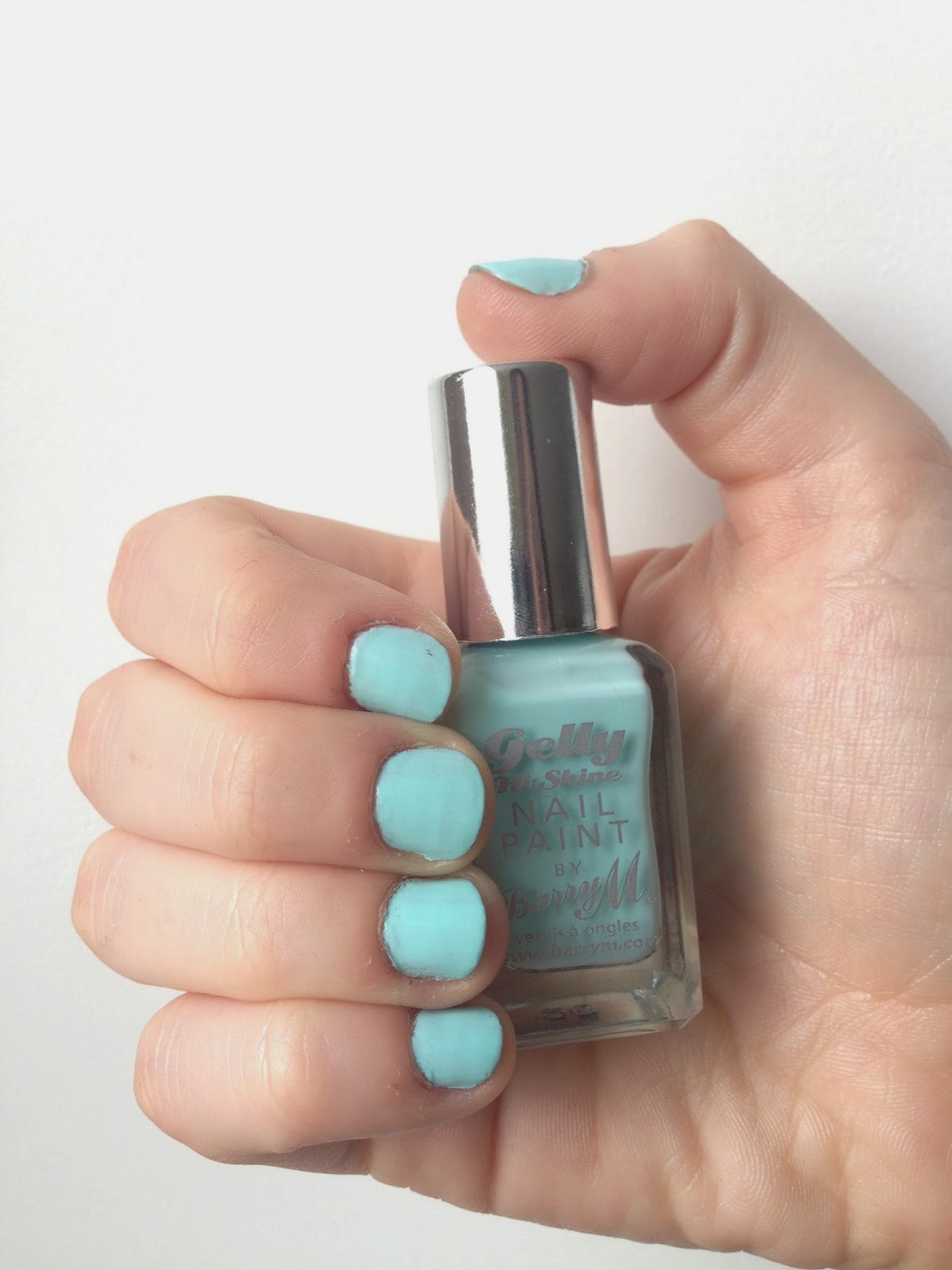 I'm not usually drawn to stark near-neon pastels like Sugar Apple; they stand out from my skintone (and most other skintones, I'd assume) in a way that can be unflattering. But in the unrelenting rainy gloom of last week, I appreciated the incandescent brightness of Sugar Apple; it practically glows in the dark. And in the sun, of course, it glows even more: 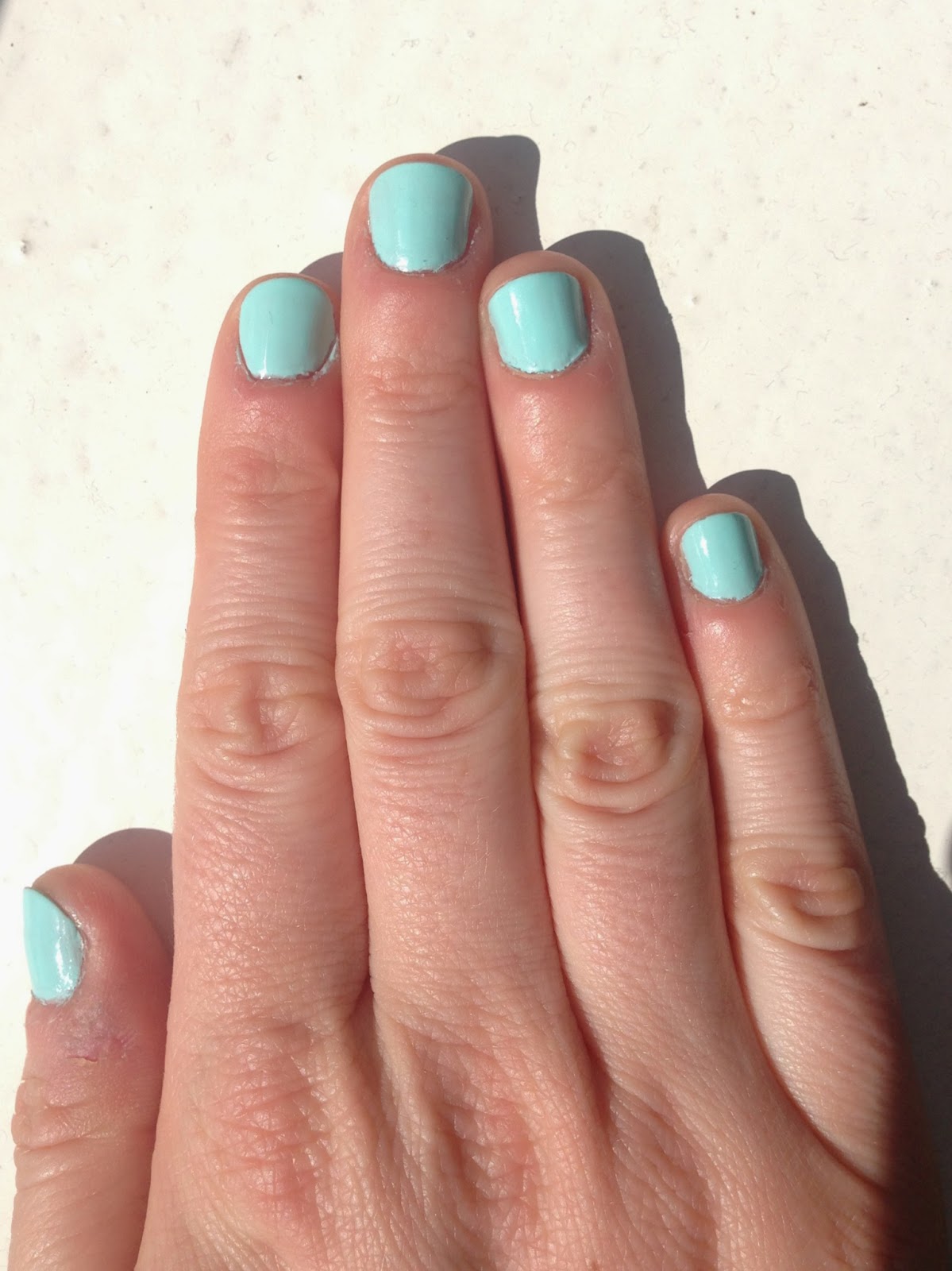 Despite my well-documented love for fuchsia lipsticks, I didn't own a fuchsia creme nail polish before Shocking Pink. I've never been crazy about red and pink polishes; give me a murky green or mannequin nude any day. But fuchsia is one of those staple colors that I felt I should own, so I decided to give Shocking Pink a try.

Ironically, Shocking Pink is more deserving of Barry M's "Gelly Hi-Shine" label, while Sugar Apple merits the epithet "shocking." There's nothing shocking about this raspberry fuchsia, but it's a shiny crelly formula that doesn't really need a topcoat--the photo below was taken without one. I had to adjust the color balance to make the pink true to life, which had the unfortunate auxiliary (ahem) effect of zombifying my skin. 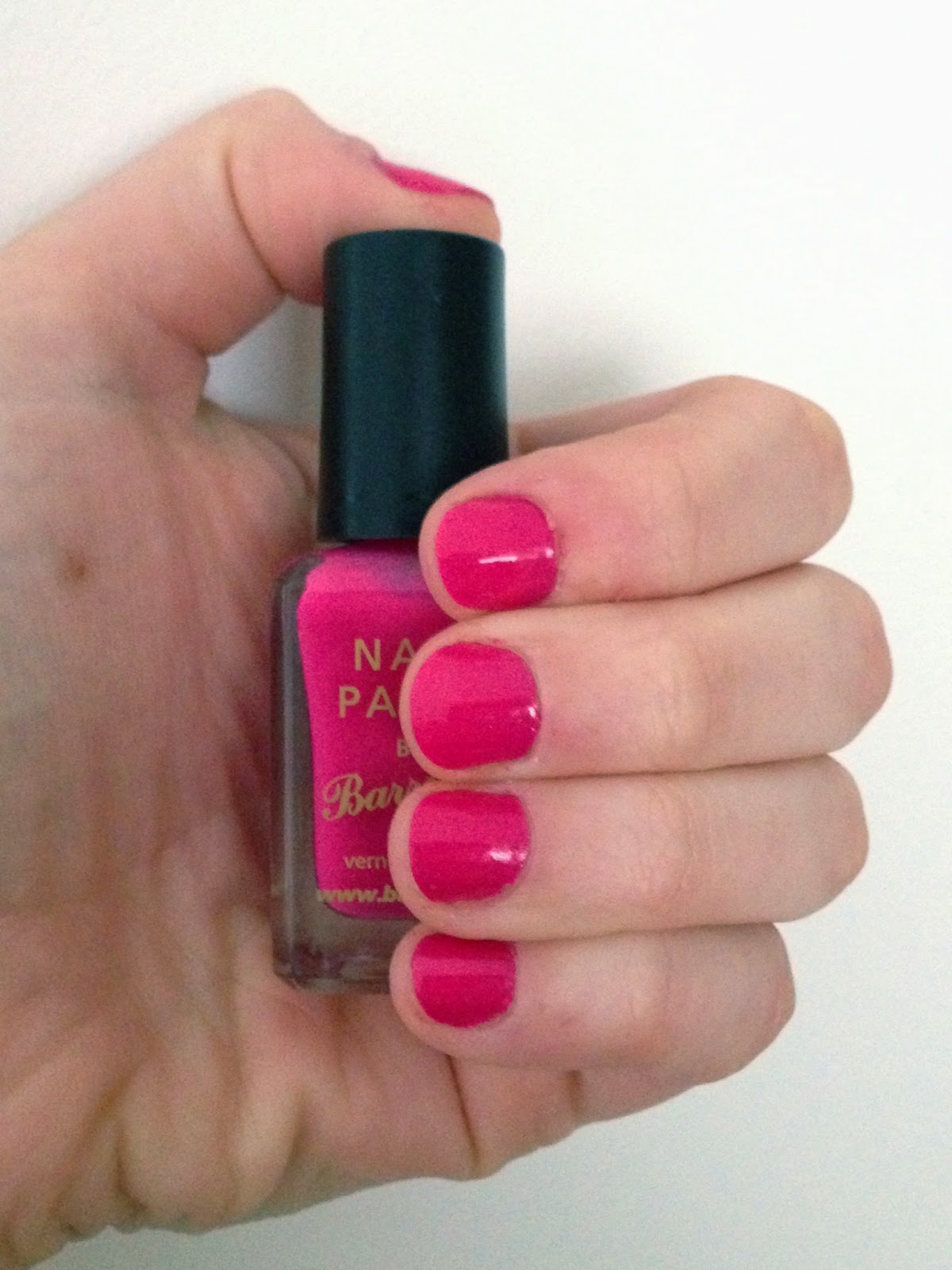 There's nothing shocking about the color, but there is something shocking about the formula: how easily it chips. I always use Sally Hansen Hard as Nails as a basecoat, and when I first painted my nails with Shocking Pink I used a topcoat as well. The polish began wearing away at the tips after a few hours, and the chips were very noticeable after a day. This seems to be a common flaw with smooth, self-leveling nail polishes: the easier they are to apply, the more readily they chip. (Chanel Tapage and Essie Play Date also come to mind.) Conversely, polishes like Sugar Apple may apply more unevenly, but they wear remarkably well. It's the rare polish that manages both smooth application and long wear; some examples I've found are OPI Eurso Euro, Essie Stylenomics, and China Glaze Ruby Pumps. Has anyone else noticed this pattern?

One more photo of Shocking Pink, this time with topcoat: 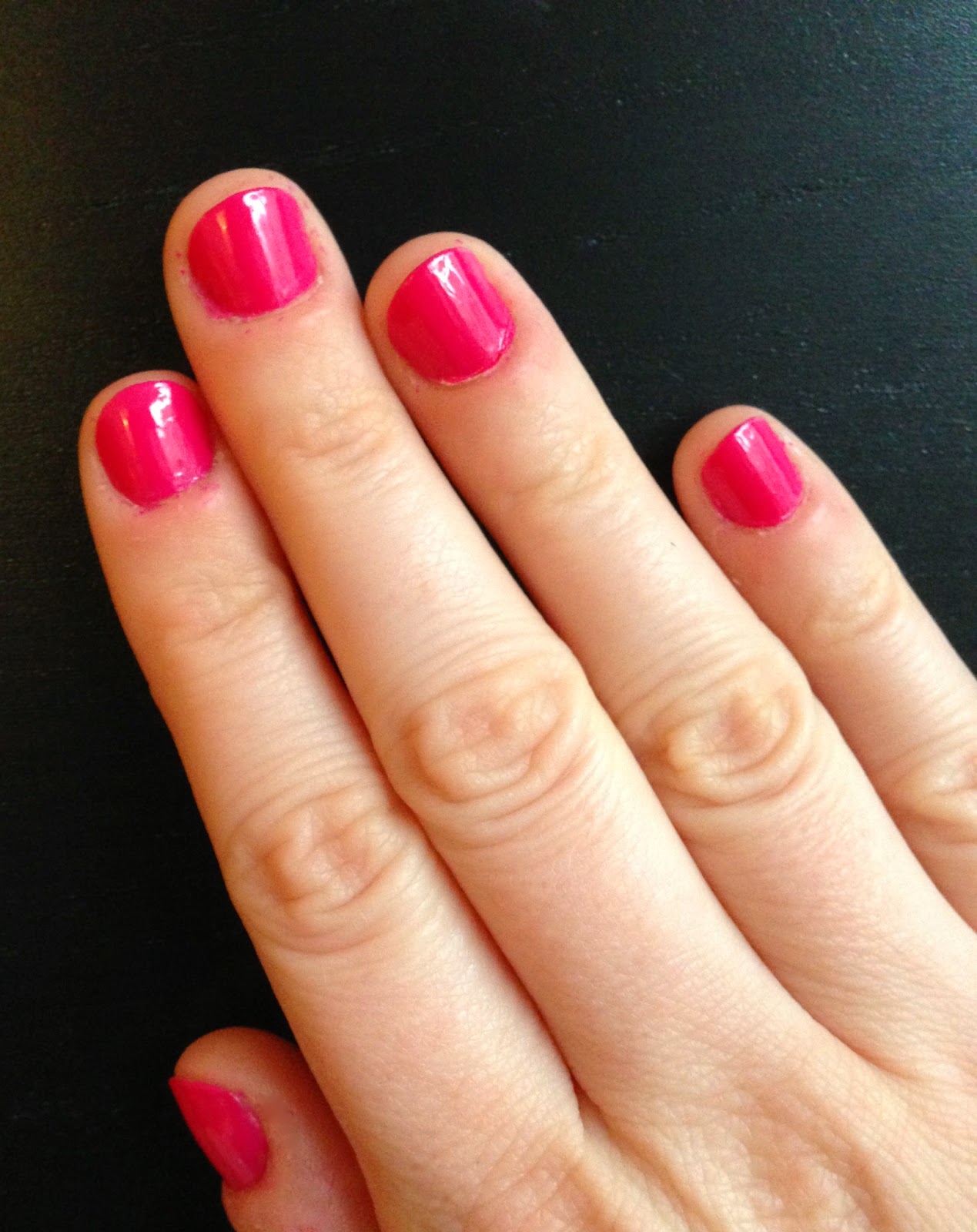 My overall impression of Barry M: decent for the price, with a truly impressive shade range. The formulas of Sugar Apple and Shocking Pink are so different that I suspect Barry M is one of those brands with a lot of quality variation between shades, which is frustrating when you're in a drugstore and can't look up reviews online. Also, the name "Barry M" will never not make me think of Barry Manilow.

Coming soon: a travelogue post, and some musings on British beauty preferences. Plus, the second installment of my Nude 'tude miniseries, which has been suspended due to constant pallid sickface.
Posted by auxiliary beauty at 2:14 PM