Two weeks after I arrived in England, I finally set foot in the huge mall near my boyfriend's apartment. It's a ten-minute walk away, so I'm not sure what was holding me back except my congenital fear of spending money. I needn't have worried, because I wandered for three and a half hours and still came away empty-handed. I know: what kind of blogger am I?

Well, not quite empty-handed: here be swatches.

I was very excited to explore Topshop's makeup selection, especially their blushes. They don't have a huge selection, but I liked the shades I tried out. Top to bottom: powder blushes in Dream Phone and Let Her Go; cream blushes in Flush and Head Over Heels. All the blushes are £7, I believe. 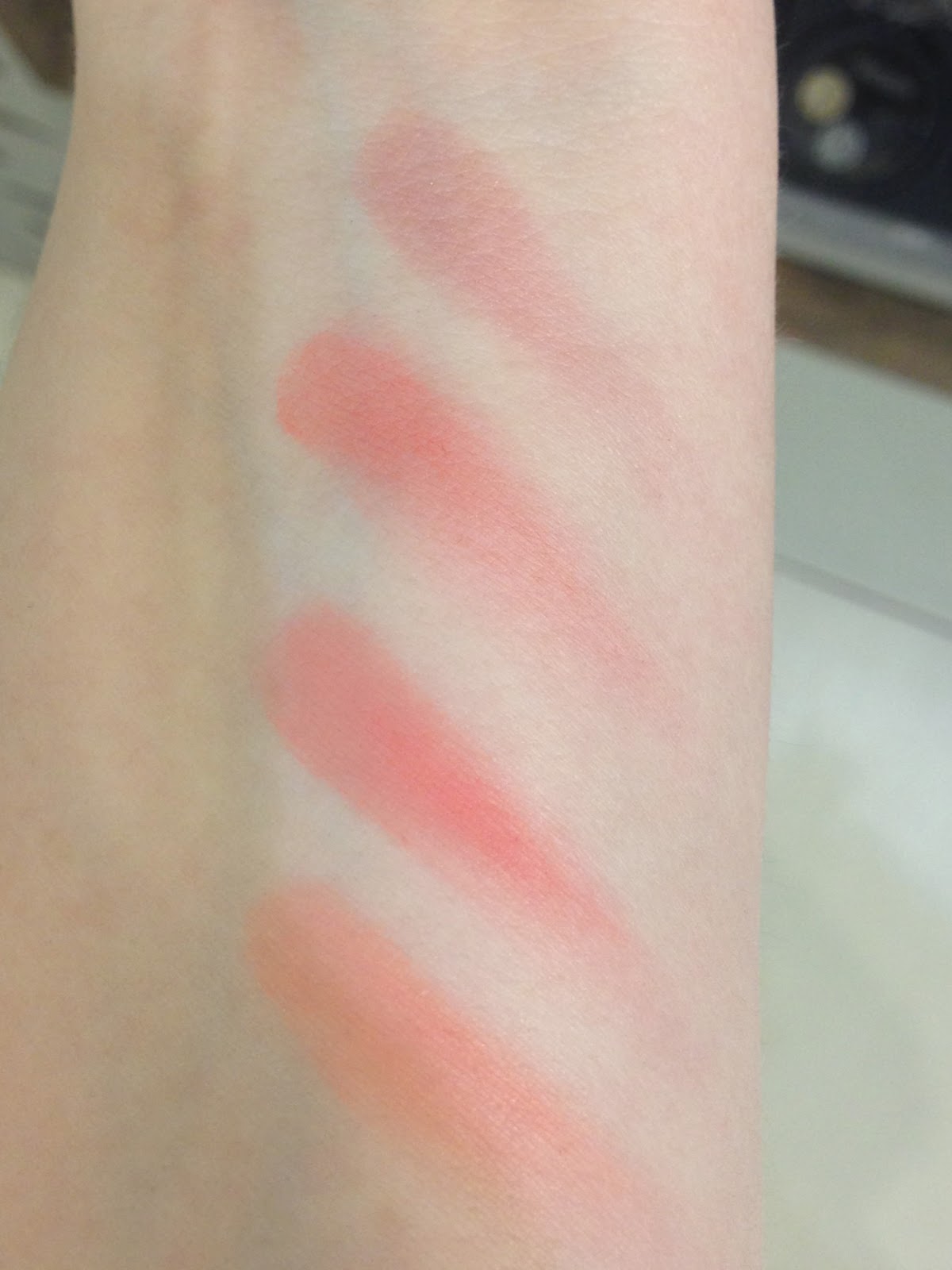 Dream Phone is a neutral plum-tinged pinky brown; Let Her Go and Flush are pink corals, but Flush is slightly cooler; Head Over Heels is a peachy orange very similar to Sleek Life's a Peach. I think I'll end up buying Dream Phone eventually--I don't have a neutral brownish pink blush, and this particular one is cool-toned enough for my complexion and, with its plum tones, perfect for fall and winter. I told myself at the time that Dream Phone was too similar to NARS Mata Hari, but I think I was lying. I'm not a good liar.

Also, check out Topshop's massive WALL OF POLISH, and my obnoxious floral jeans. 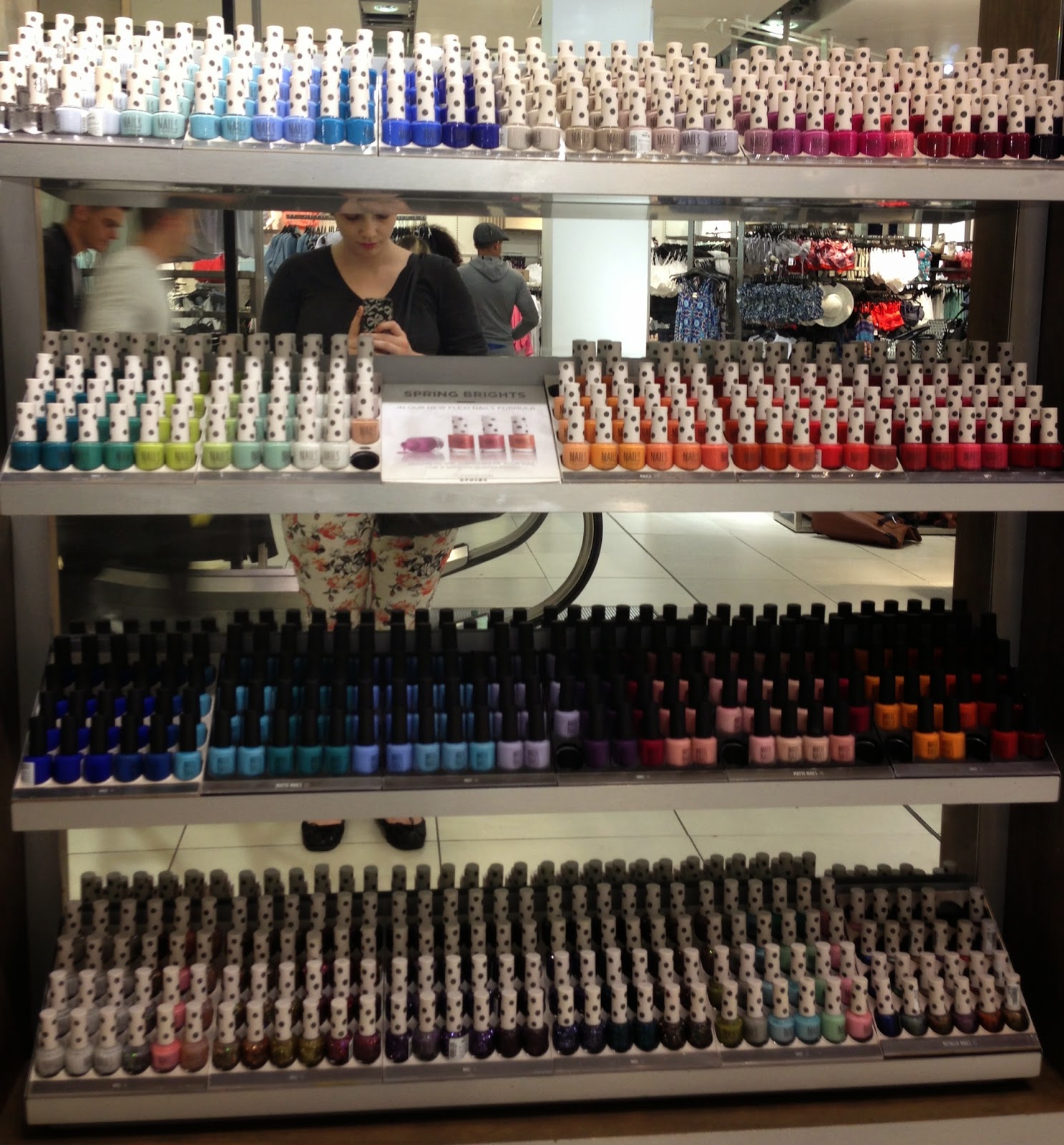 Most of the polishes are £5, though the glitters at the bottom are £6. I'll probably go back for Clique, an avocado green; it's the third color from the left in the second row. I've been hunting for a chartreuse nail polish for a while, and this one looks perfect.

Moving on to Boots, I played with Rimmel's Apocalips Lip Lacquer, a range of liquid lipsticks. These are available in the States, though not very widely. Their American name is "Show Off Lip Lacquer," perhaps to avoid offending the great number of Americans who believe the apocalypse is nigh. I've read mixed reviews of these lipsticks, but I was certainly impressed with their pigmentation. Top to bottom: Luna, a pale orange; Stellar, a super-saturated red-coral; Apocaliptic, a fuchsia almost identical to Milani Pink Rave; and Across the Universe, a lush 1940s-style browned dark red. 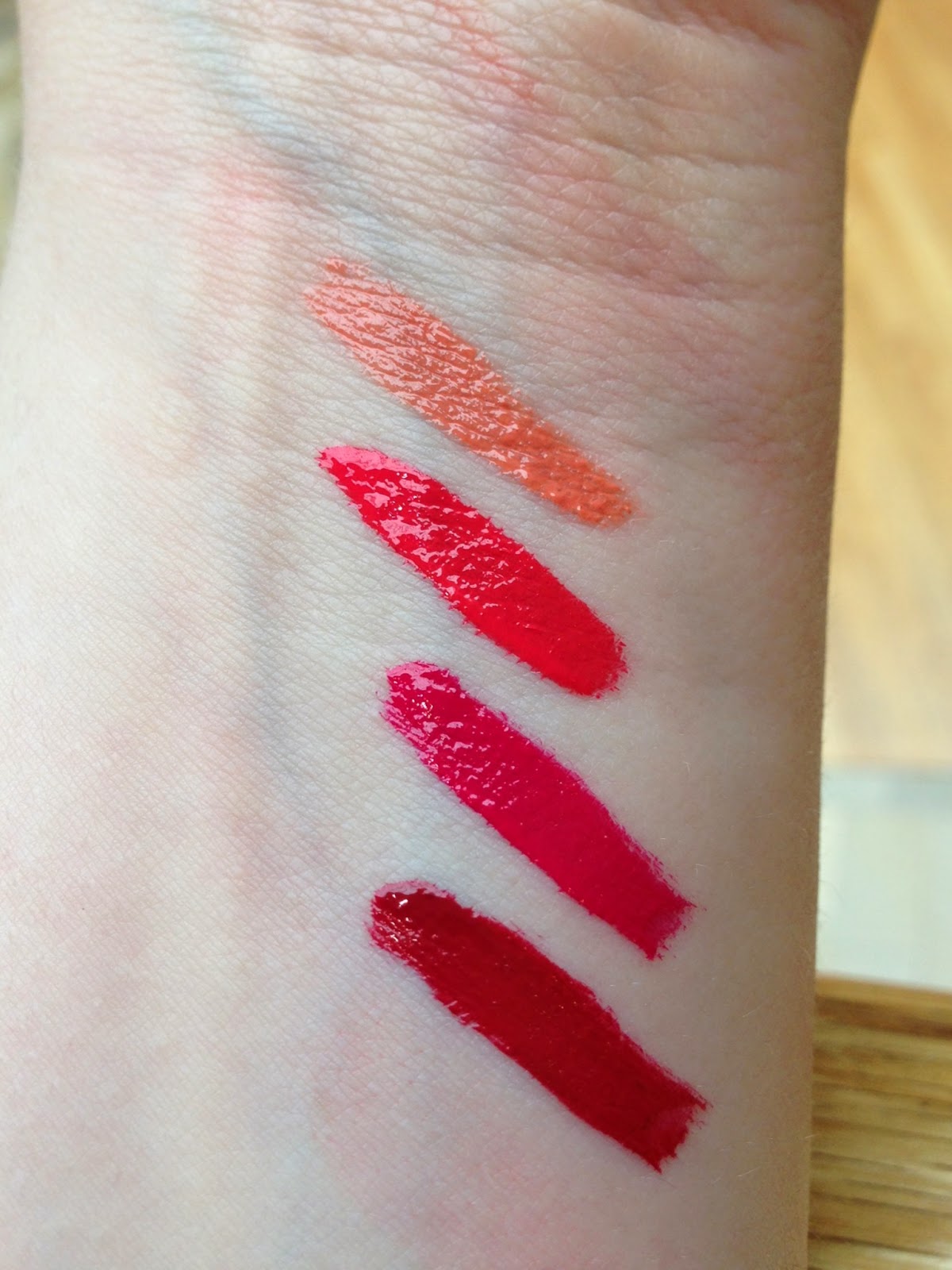 By the way, I've been pleasantly surprised that the drugstores in England have makeup testers. In America, testers are strictly for higher-end stores like Sephora; there's no way to test makeup in a drugstore except by opening and mauling a pristine item (which, believe me, many people do).

Finally, I headed to the beauty department at Selfridges, where I saw something I had never seen before: a giant Illamasqua counter. I made a beeline for the cream blushes (£21.50) and swatched the four that had been on my radar in recent months: Dixie, a peachy pink; Libido, a red-orange; Rude, a lighter, warmer peach than Dixie; and Zygomatic, a pink-beige. 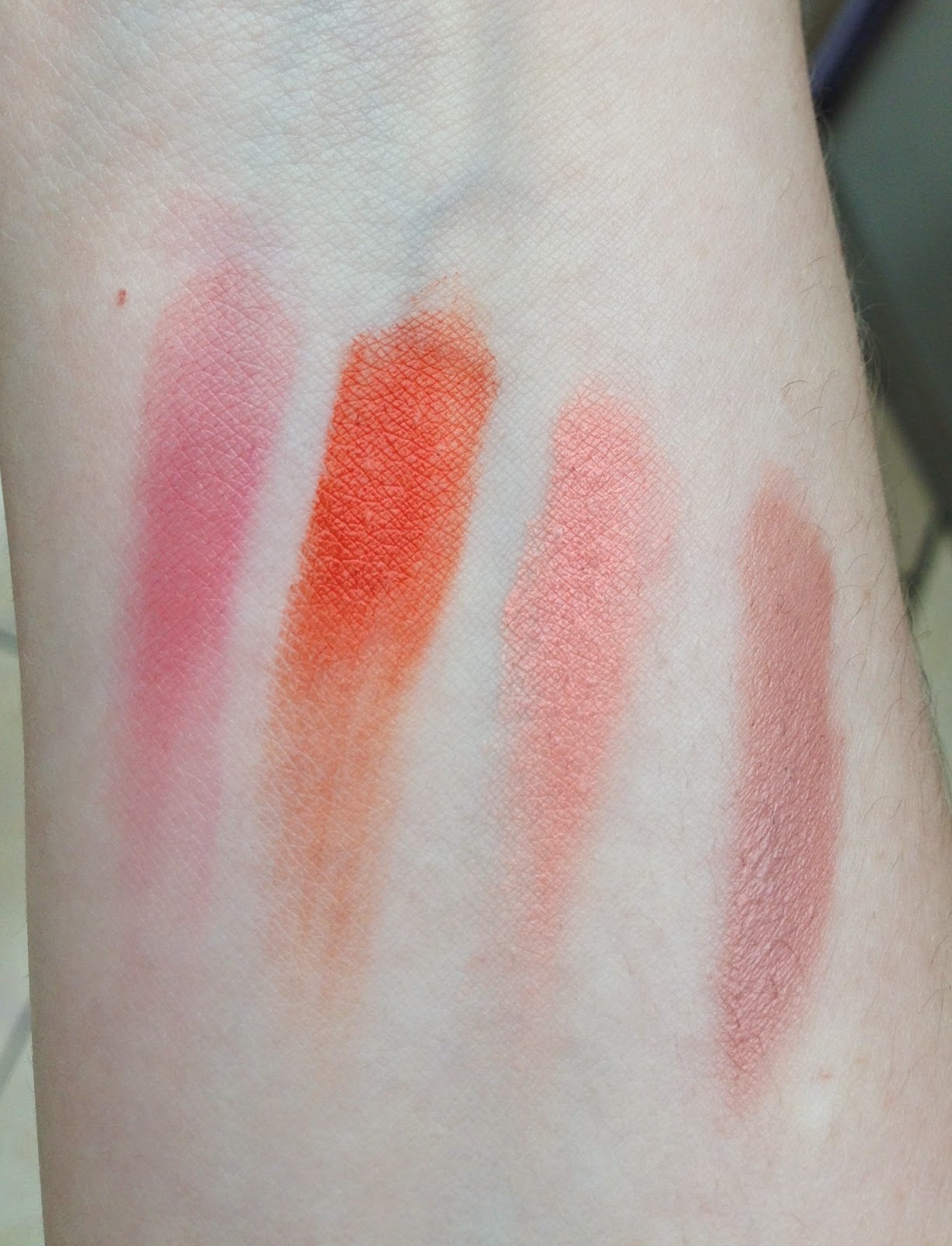 My favorite turned out to be Zygomatic, which reminded me of Dream Phone; I was really feeling the cool-toned pink-brown neutrals today. Liz will kill me for not buying Dixie after mentioning it in so many posts, but I don't know, I just thought it would be more coral and less pink? I'M SORRY.

I did, however, try it on. I was already wearing Life's a Peach, but not much of it, so what you're seeing here is almost entirely Dixie. In weird dressing-room light: 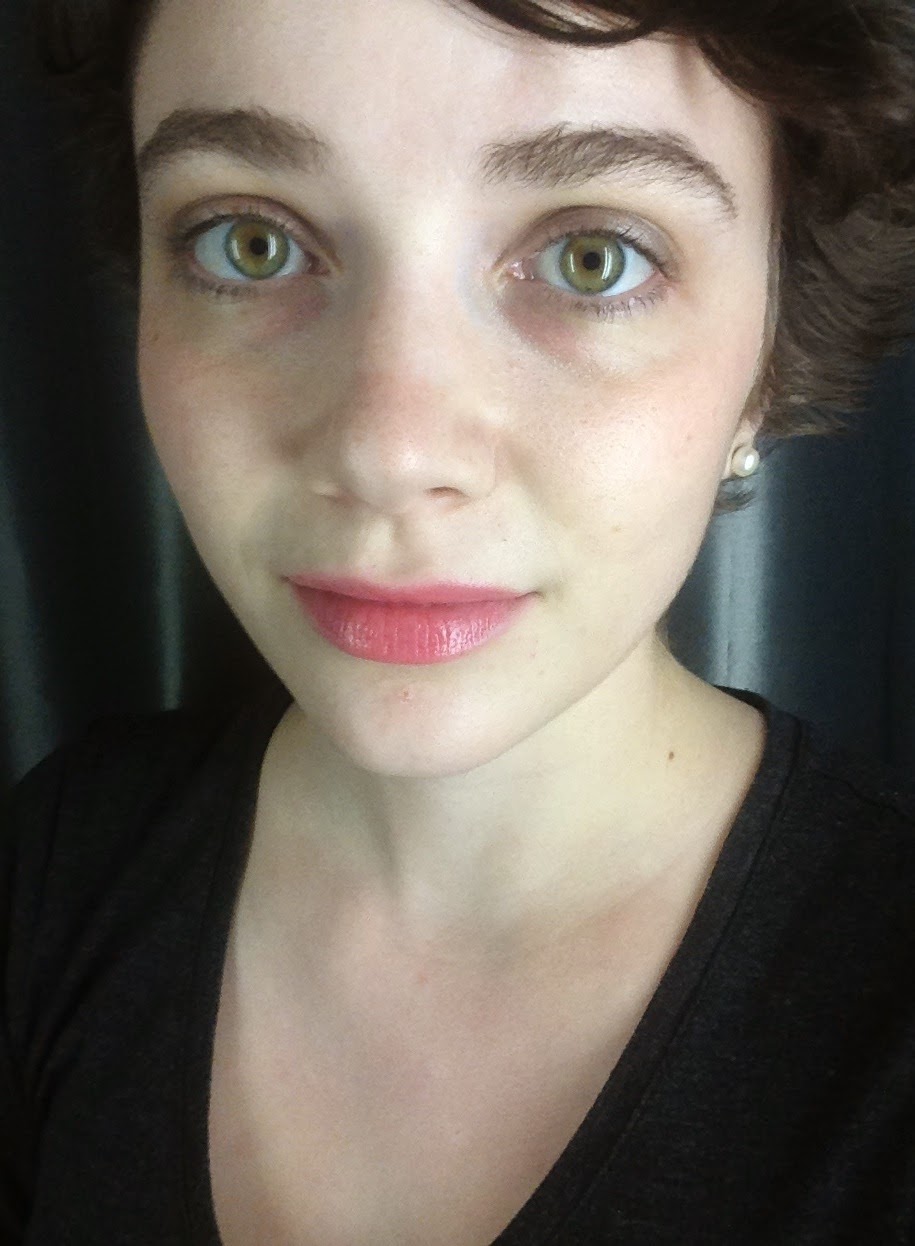 Back home, in normal light: 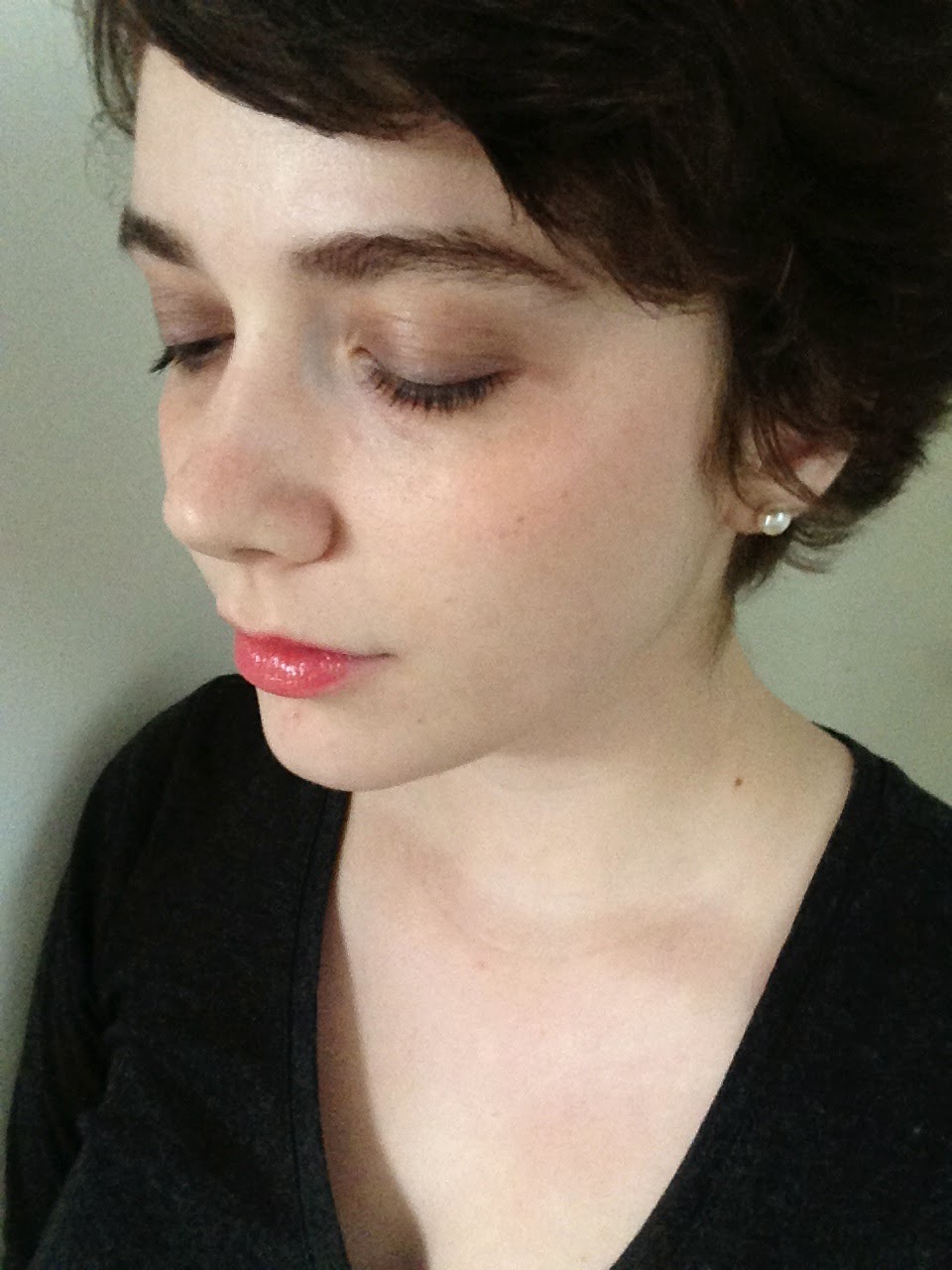 There was also a Suqqu counter! Part of me had always believed that Suqqu was a mythic brand accessible only to demigods and royalty, so I was taken aback. Unfortunately, the lady at the counter was so pushy that I couldn't stay more than a few seconds. I also saw the Dior Fluid Sticks in person for the first time ever, which was more exciting than it should have been. Today my cheapness won out, but I'm sure there will be a next time. Until then, I have my two-dimensional images to console me.
Posted by auxiliary beauty at 2:15 PM