I rely on drugstore beauty brands for colors I feel ambivalent about, which means that I've amassed quite a few orange and warm red lipsticks from Revlon, Milani, and Maybelline. And, surprise, I'm still ambivalent about oranges and warm reds on my complexion. Is this because they really don't suit me, or because I never spring for higher-quality lipsticks in those colors? Would, say, the YSL Glossy Stain in Orange de Chine suit me better than Milani Sweet Nectar, a yellow-based orange that I keep around not to wear, but to remind myself never to buy another true orange lipstick?

All this may have led you to believe that I'm going to be reviewing an expensive lip color. No, I'm still the same cheap bastard I always was. I recently bought Vibrant Mandarin, an orange-red coral from Maybelline's Vivids line, and I've spent a few days deciding whether it suits me. And since we're on the subject of questionably flattering colors, I'll also review a new polish purchase: Milani Vanilla Almond, a pale nude that I bought to achieve the "mannequin hands" effect, which some people strive for and others find creepy. I think I like it because it's creepy. 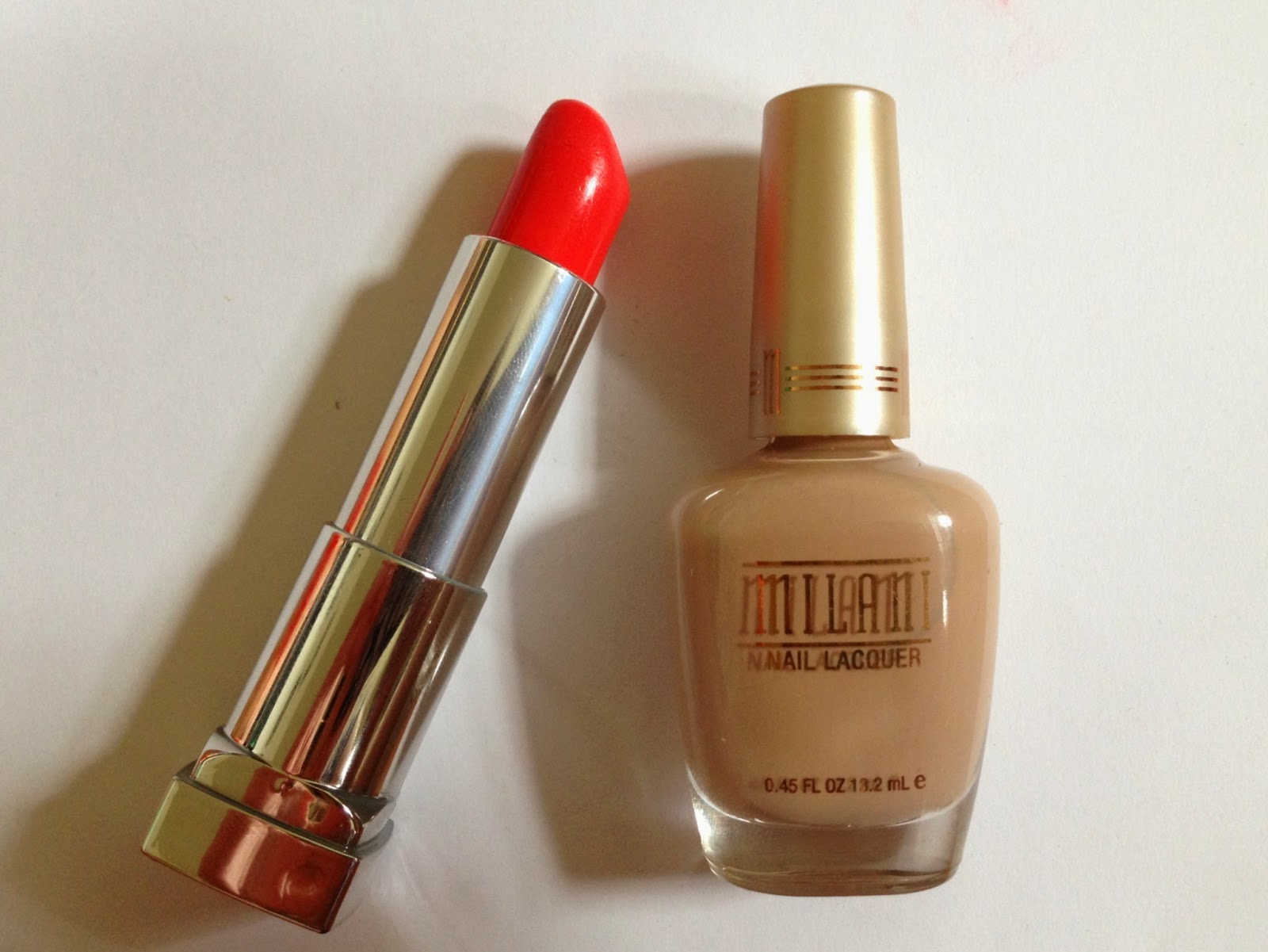 When the Maybelline Vivids first came out last year, I went a little crazy, picking up four over the course of that spring: Fuchsia Flash, Vivid Rose, Brazen Berry, and On Fire Red, all of which are coming up in my Lipstick Chronology. Vivid Rose and Brazen Berry (reddish fuchsia and pinky purple, respectively) get far more use than the other two, but all four have an impressive formula: pigmented, moisturizing, and softly glowing. I hesitated for a while over Vibrant Mandarin, partly because of the color and partly because I've been avoiding beauty purchases that aren't cruelty-free. But in the end, curiosity and a $5 coupon won out. 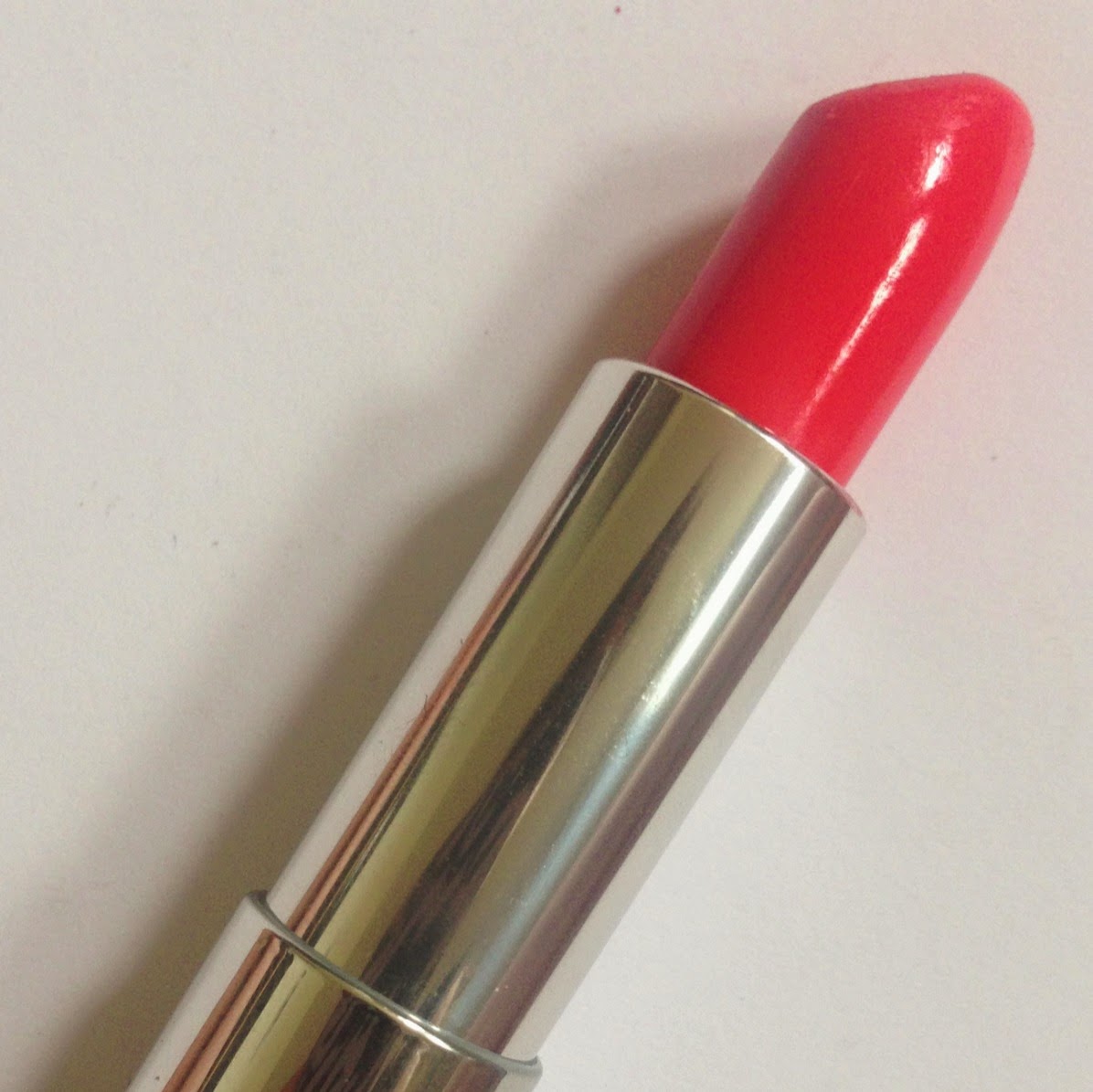 Swatched on the arm, Vibrant Mandarin looks like a classic red-orange; after one pass (left), it looks semi-sheer, and even after two (right), it retains some of that translucency. 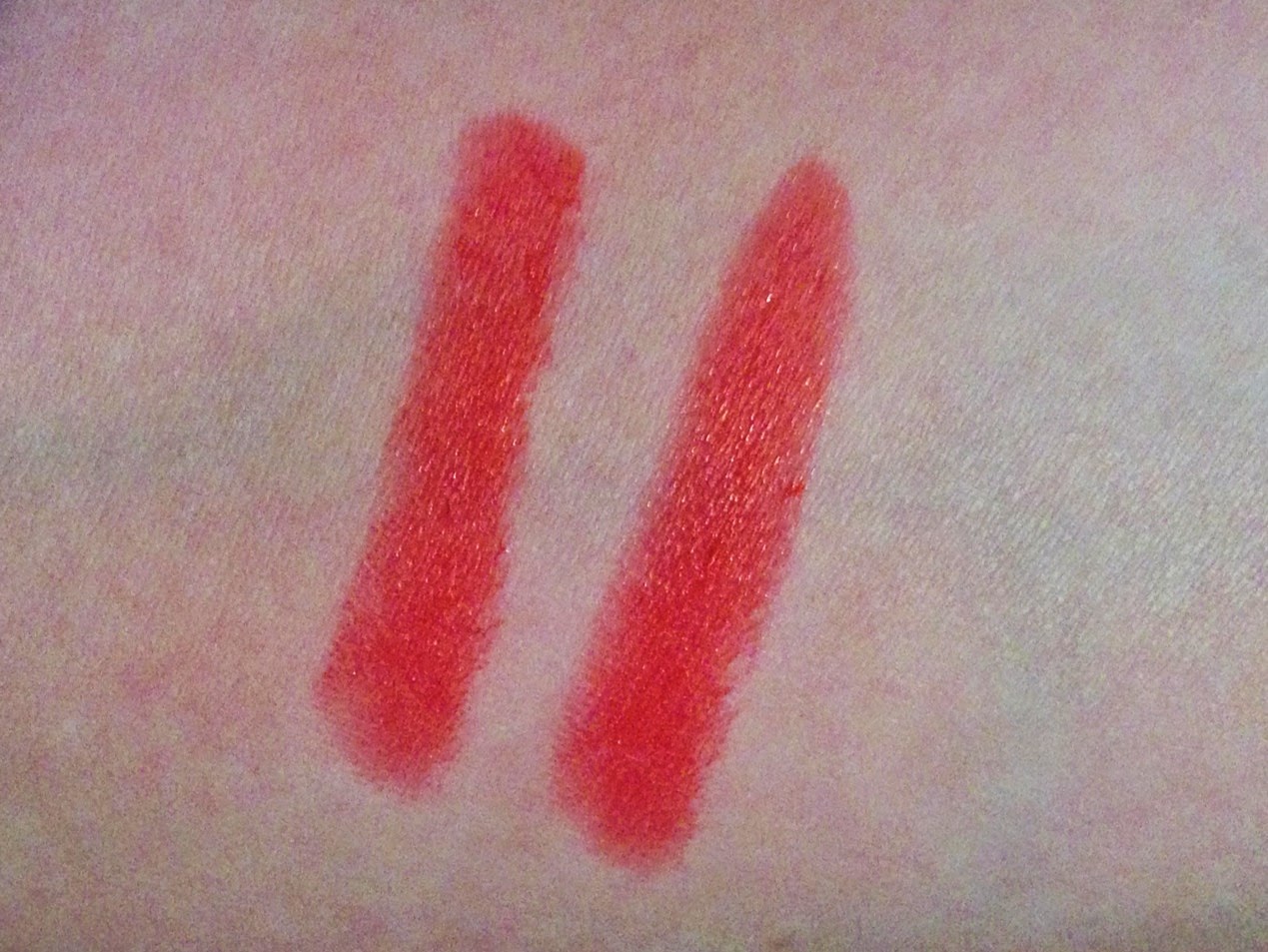 It turned out, improbably, that I didn't have a dupe in my already overstocked lipstick treasury. Left to right: Milani Sweet Nectar (lighter, yellower); Vibrant Mandarin; Revlon Candy Apple (sheerer, cooler); Revlon Fire and Ice (redder, more pigmented; it looks like a neutral red next to the other three, but is decidedly warm on its own). 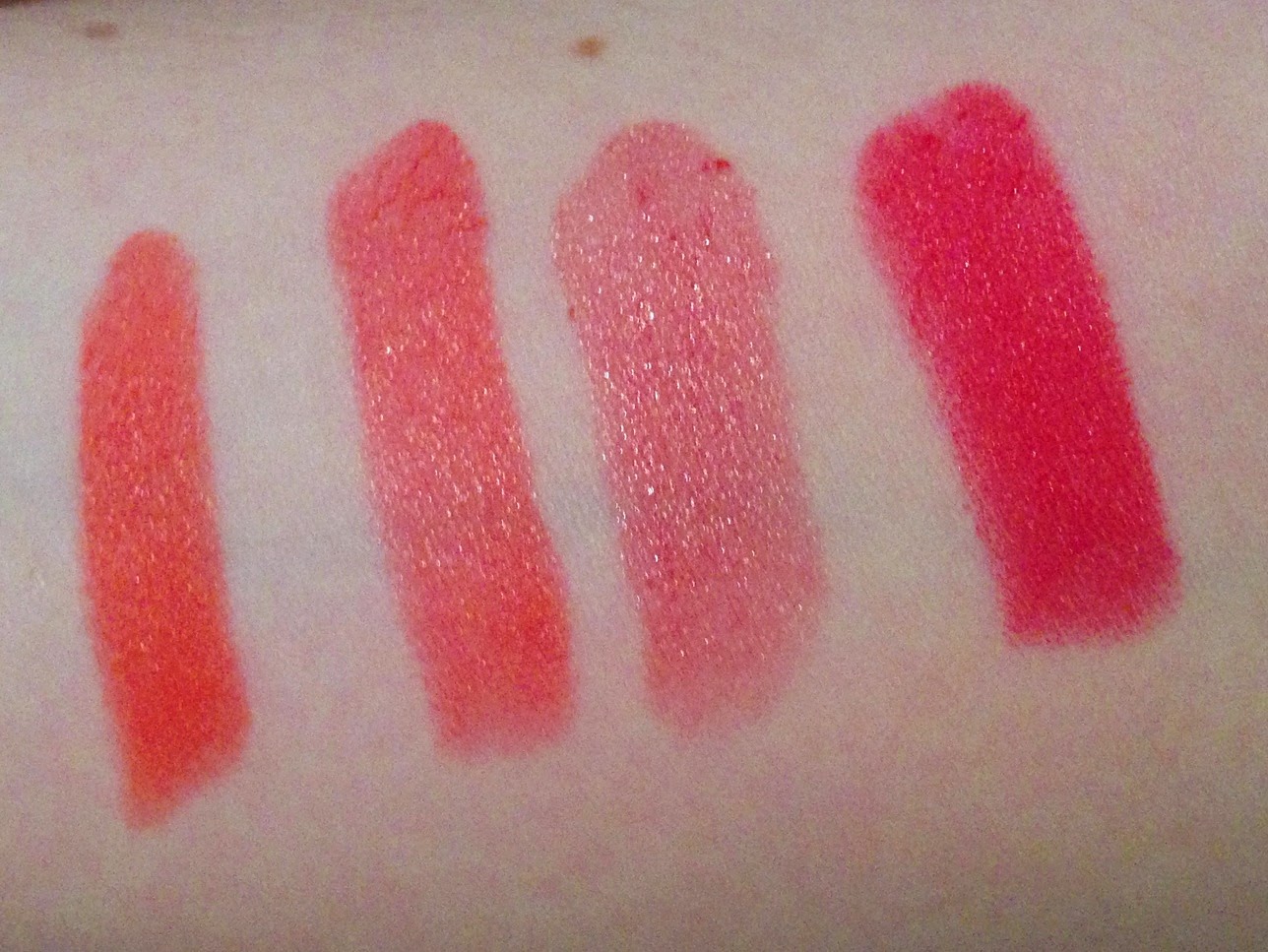 Ordinarily, the semi-sheerness of Vibrant Mandarin would lead me to dismiss it as an inferior product; after all, the Vivids are supposed to be opaque. But since orange-red-coral is not my best color, I wanted a little translucency. I suspected that my cool-toned lips would pull the lipstick cooler and pinker, rendering the orange more flattering to my complexion. With the end of winter, my lips have stopped cracking and bleeding every couple of days, so I can finally post bare/lipsticked comparison swatches. 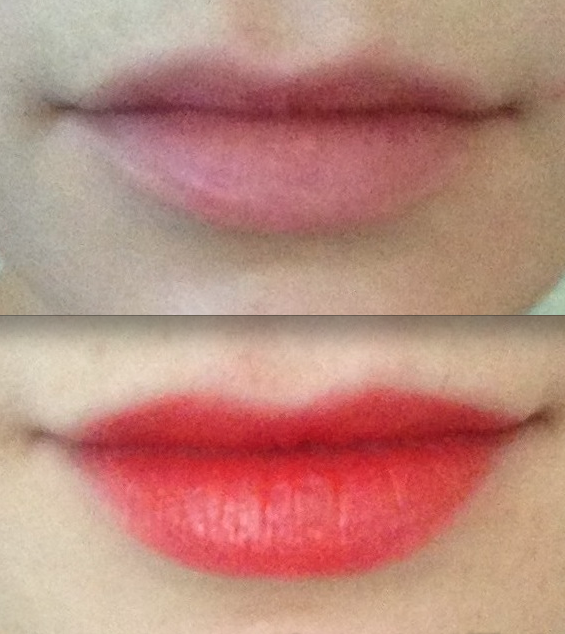 Vibrant Mandarin is a shape-shifting color, passing in the course of a day through every conceivable combination of red, pink, and orange. It all depends on the light, and your eyes, and probably your mental state as well. I was on the fence about keeping it for a few days, but it eventually won me over. It looks beautifully summery with NARS Habanera, too. 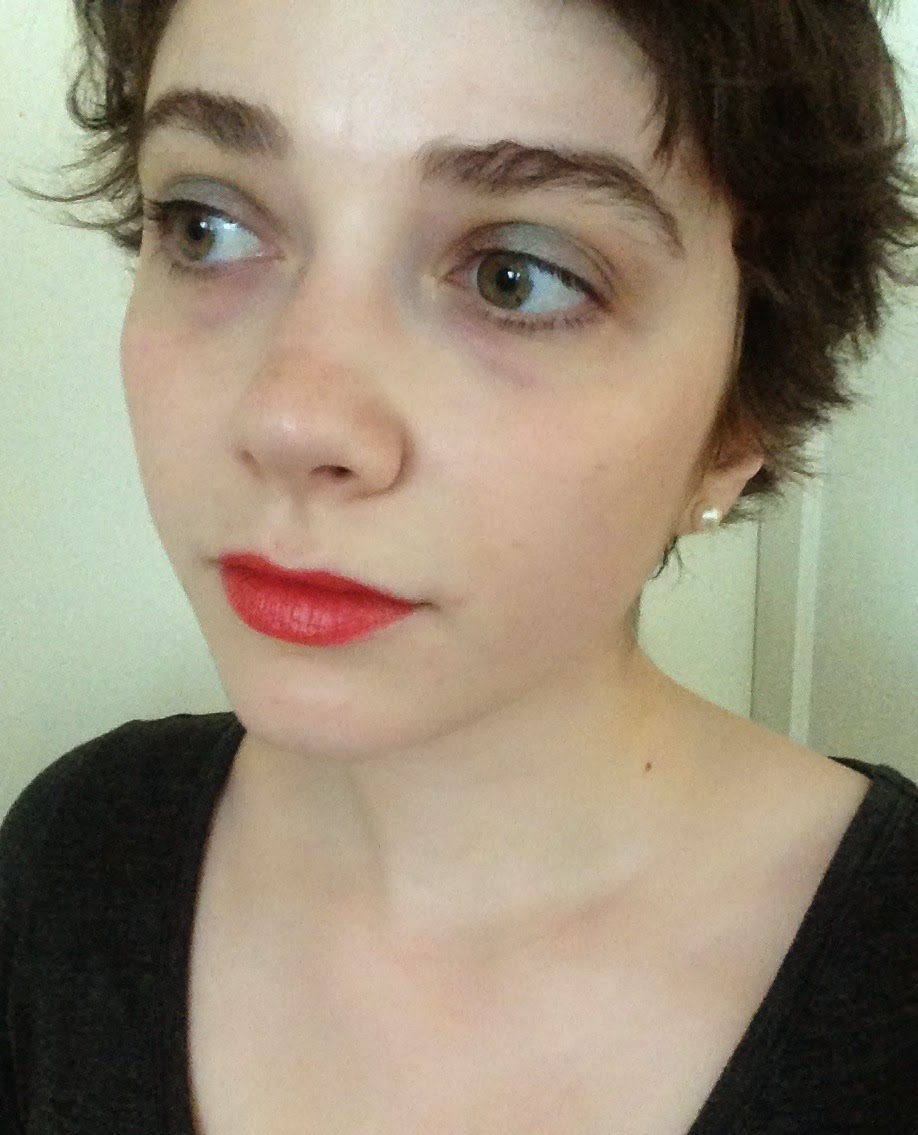 I still find the color a little jarring against my complexion, but sometimes jarring is desirable. Because I'm cool-toned, the brightest cool pink will never pop off my face as dramatically as coral does, and there are days when I want that dramatic pop.

A difficult effect to achieve, which is probably why I find it so appealing. There's really no way to get a perfect match between your polish and your skintone, because skin itself isn't one even tone. But of all the nude polishes I've tried, Vanilla Almond is the closest match. It's a pale beige with a tinge of pink: 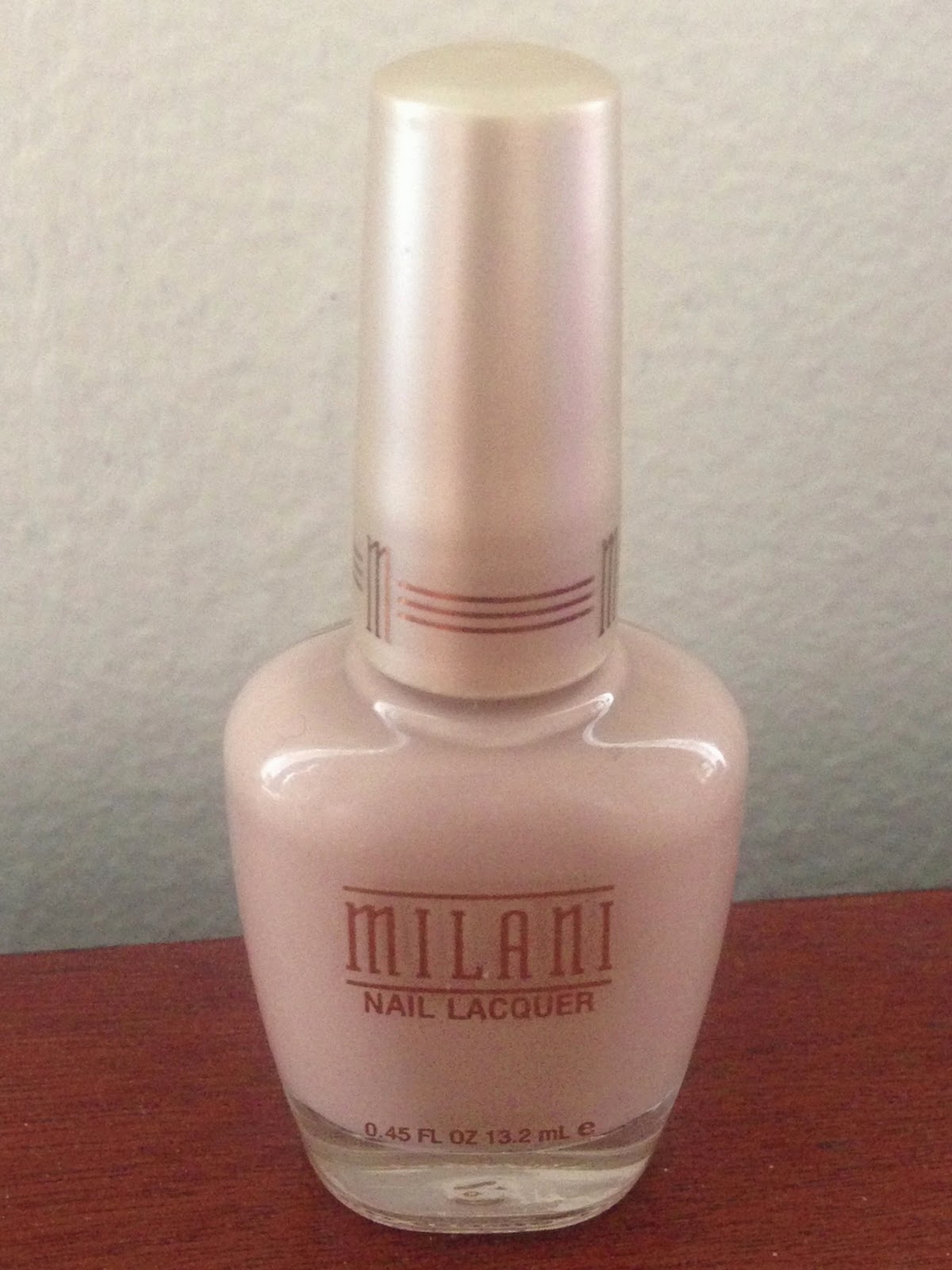 When I wear it, I feel like a porcelain doll or a cyborg: a little more artificial than normal. Which I quite enjoy. 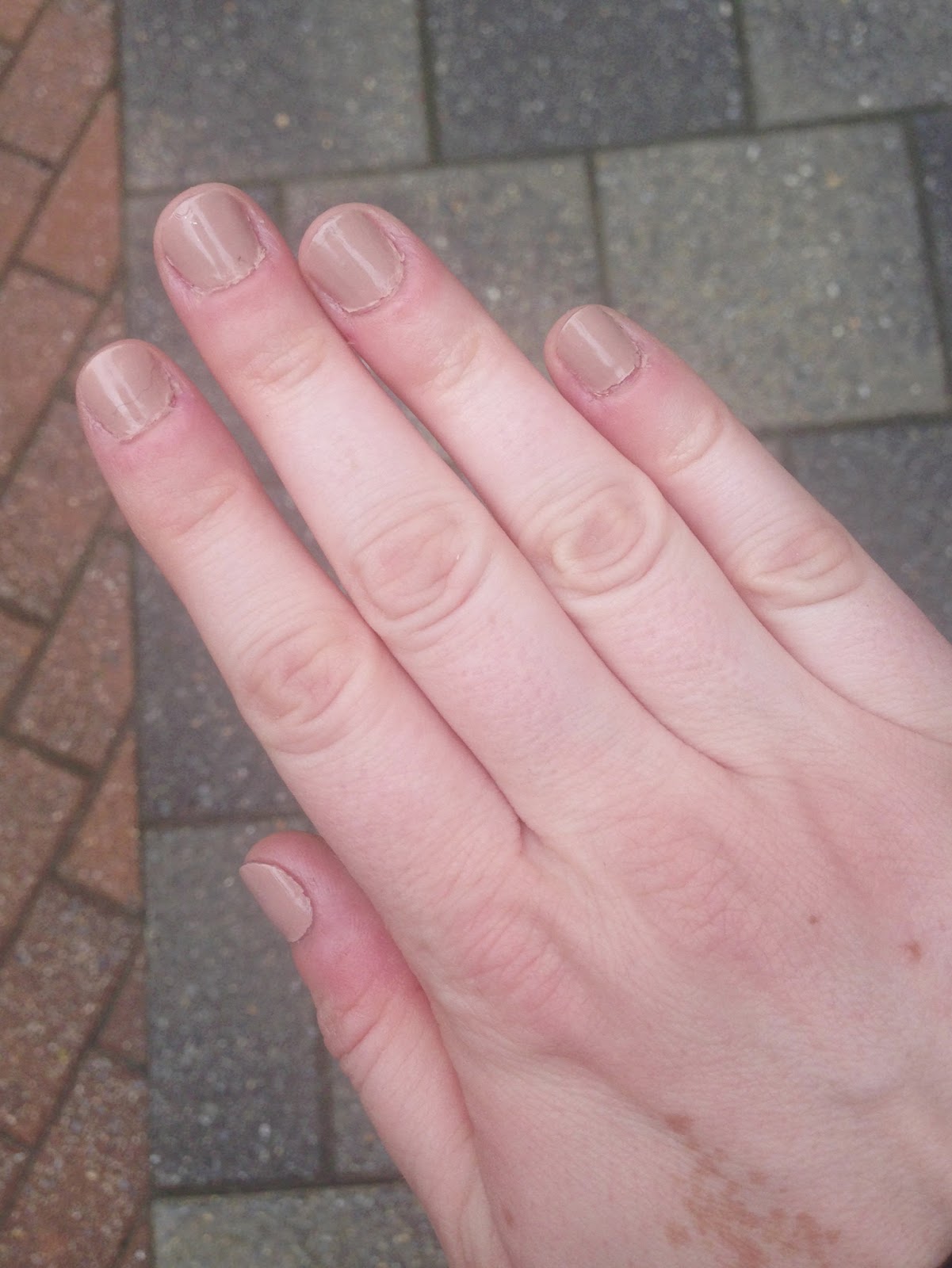 This is my last post before I leave for the UK tomorrow evening; when next I check in, I'll be on Greenwich Mean Time and full of McVitie's digestive biscuits. But for now, here's my face earlier this evening, before my boyfriend and I had cocktails at the one ~nice~ bar in town. Vibrant Mandarin on the lips, looking a little pinker than it did earlier in this post; NARS Lhasa eyeshadow and NYX Jewel eyeliner on the eyes. 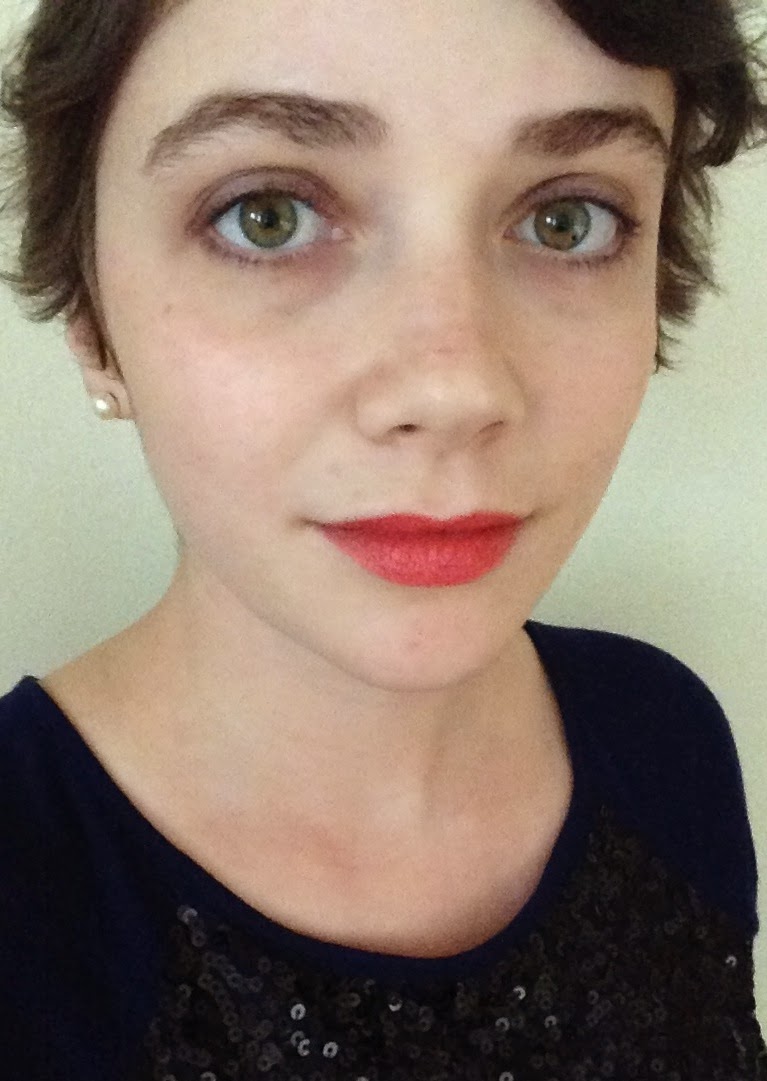 This trip really crept up on me, though it's been in the works for two months now. It was only this week that the reality of oh shit five and a half weeks in Europe hit me. This is mostly because I'm a nervous flier who puts off making serious travel plans for as long as possible. Today I've been distracting myself from the prospect of air travel by deliberating over which lipsticks and nail polishes to bring. I haven't come close to deciding, but never fear: I'll let you know when I do. See you soon.
Posted by auxiliary beauty at 7:41 PM