Beauty Abroad, Part 4: Back to Burgundy with Sleek and Rimmel

As a result of moving to San Francisco at the age of seven and feeling deprived of "real seasons" for the next decade, I'm very faithful to the idea of seasonal colors. So long as there's snow on the ground, I'm going to cling to my burgundy lipsticks and plum nail polishes. And when I packed for England three weeks ago, I tucked into my makeup pouch all the peaches and corals and fuchsias that I hadn't felt like wearing during our long, brutal northeastern winter. For some reason, I assumed that England's weather in May and June would at least remind me of late spring. I had a hazy memory of May and June in Oxford being sunny and idyllic, but I suspect now that I was indulging in a bit of synecdoche and making two perfect days stand for two months.* As you learned very recently, my memories of my travels are not always to be trusted.

My visit to England this year has been characterized by rain, chill winds, and a stubborn cloud cover. It's warmed up enough by now that I no longer have to wear my heavy wool overcoat, but I've spent a lot of time regretting that I didn't include any dark, moody colors in my travel makeup. Yesterday this regret drove me into Superdrug, where I picked up two products I'd never have thought to wear at this time of year back home. 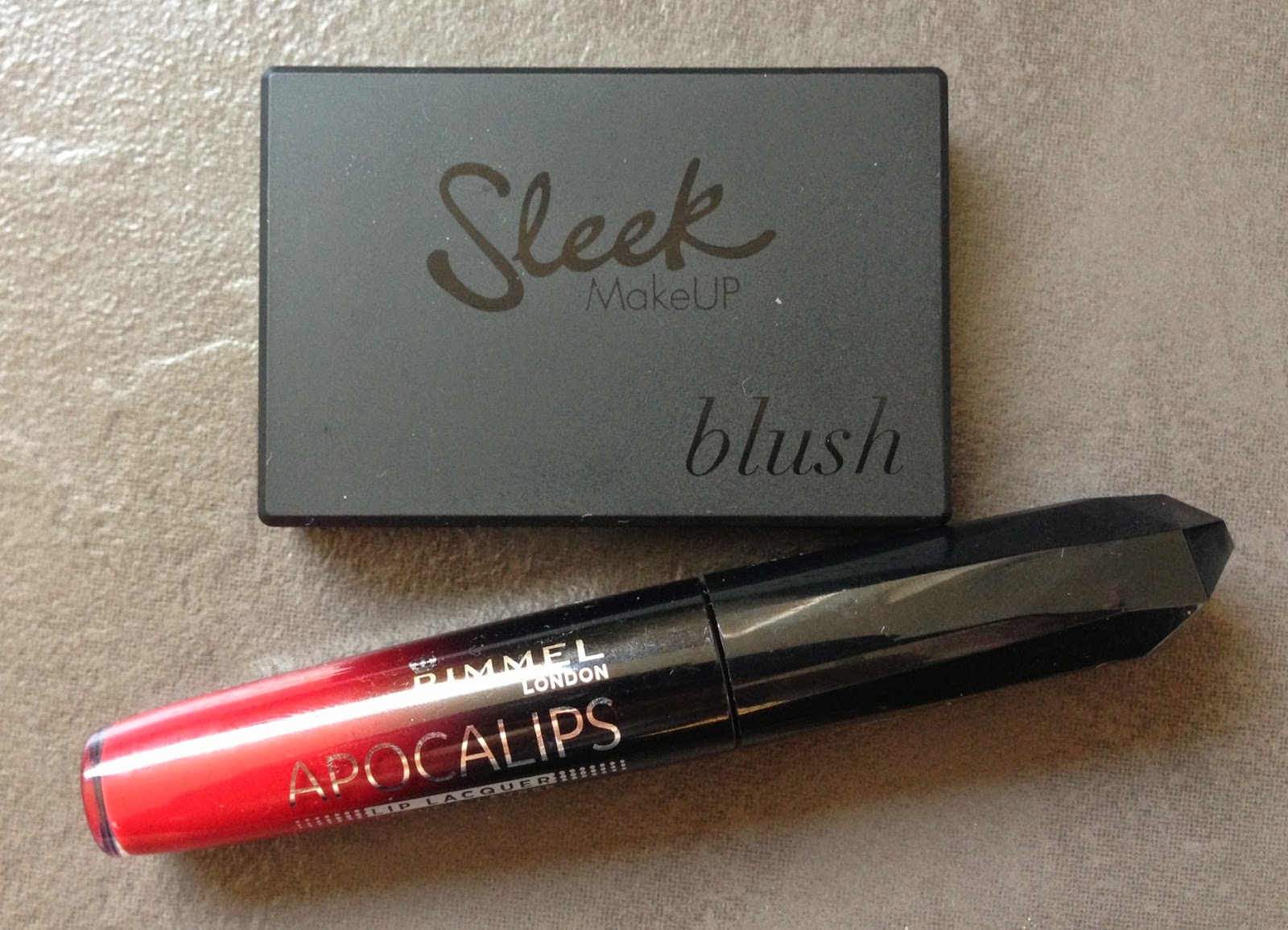 Namely, Sleek powder blush in Flushed, a reddish plum, and Rimmel Apocalips Lip Lacquer in Across the Universe, a cool dark red with a touch of brown. 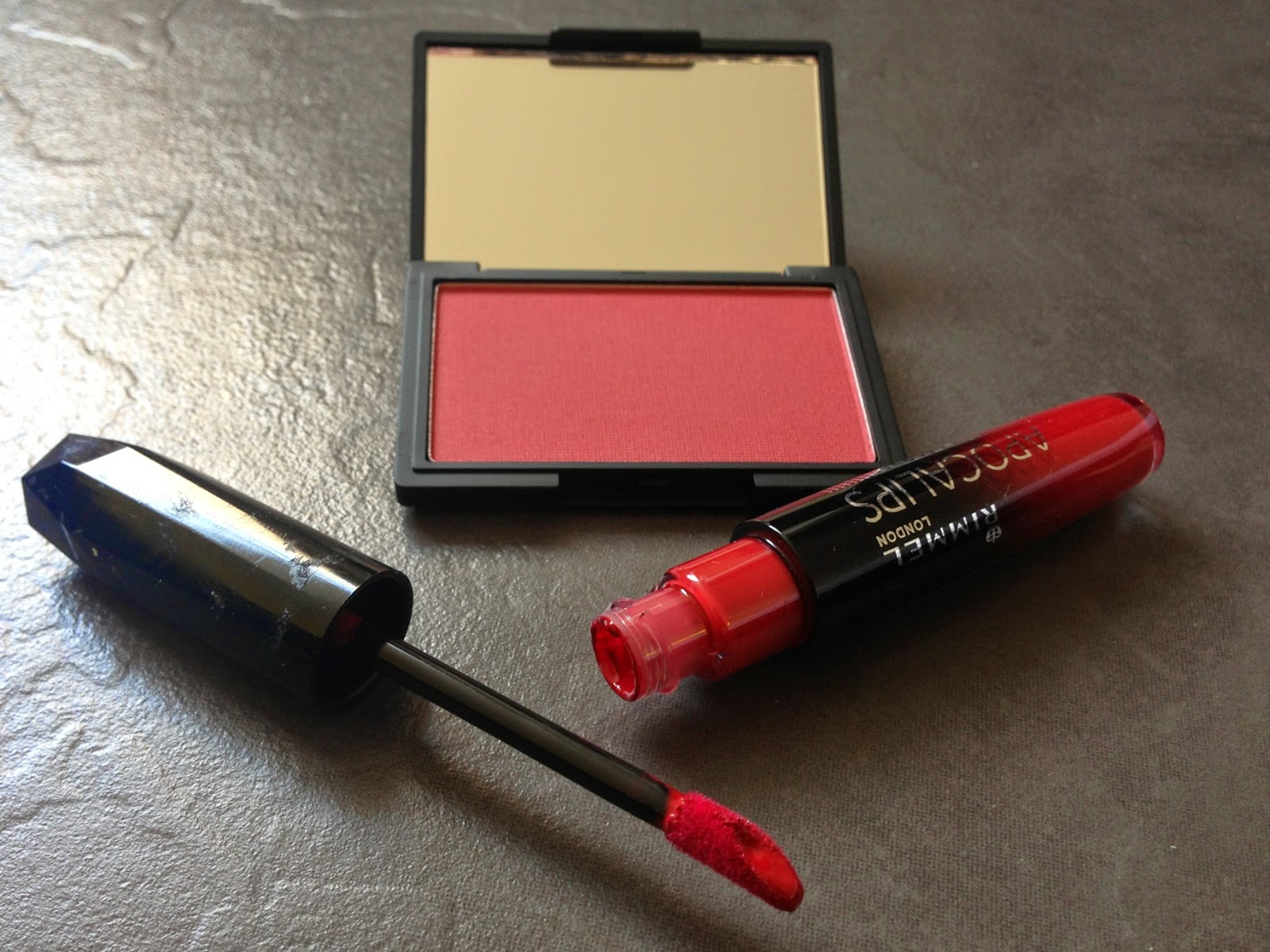 Below, swatched on my arm; one swipe of Across the Universe and two of Flushed. The Rimmel lacquer went matte almost immediately on my arm, but it doesn't do that on my lips. Hmm. 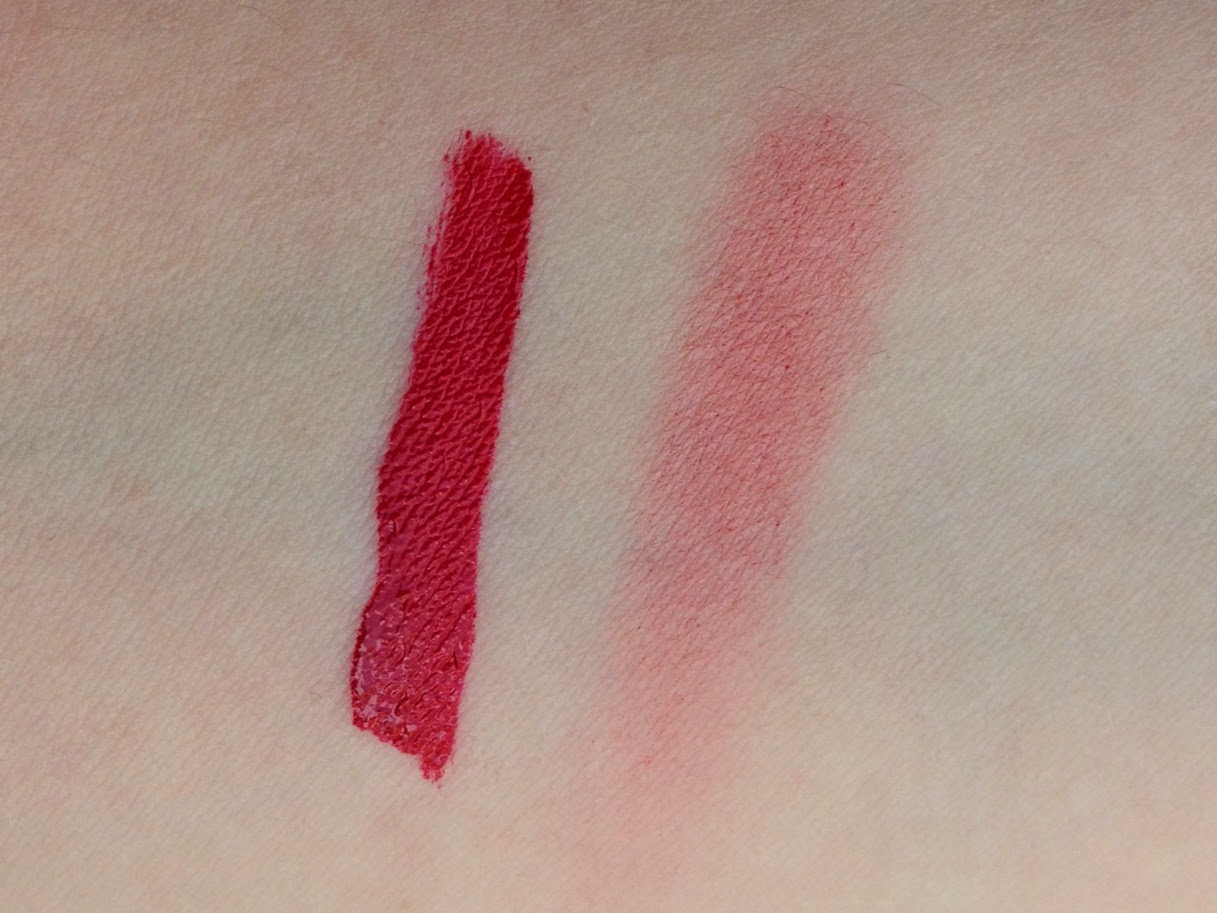 The first one I tried out was Across the Universe; when it comes to lip products, I can rarely wait more than an hour between purchase and face-painting. The odd shape of the Apocalips applicators has been pointed out by many a blogger. The stiff, spongy wand has a well in the center, and the product pools there instead of suffusing the entire applicator. I've said it before and I'll say it again: there's no way to describe liquid-lipstick or lipgloss applicators without unfortunate double entendre. 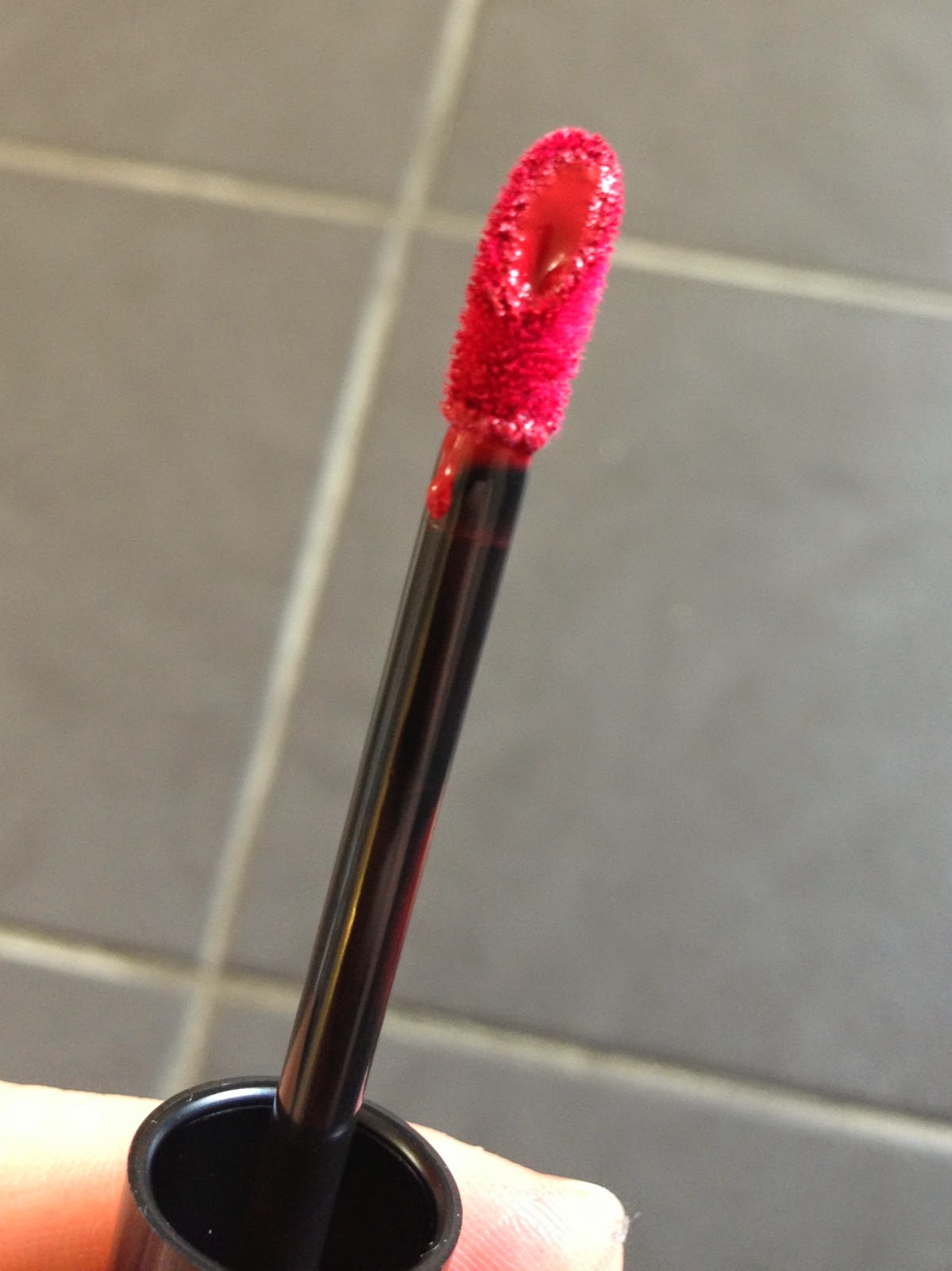 The shape makes it easy to outline the Cupid's bow precisely, which I take care to do with darker lip colors for a silent-film-starlet touch. Alas, it's equally easy to overdraw the lower lip, which I take care never to do ever. I had to do a bit of drawing and tissue-blotting and finger-smearing and redrawing before I was happy with the result.

Freshly applied, Across the Universe has a satin but not glossy look; "lacquer" is a misnomer, as it sets to a semi-matte finish after a short time. (Check out my new necklace, too. I like to think it doesn't scream "purchased for €10 at a Venetian tourist kiosk" now that I'm back in England.) 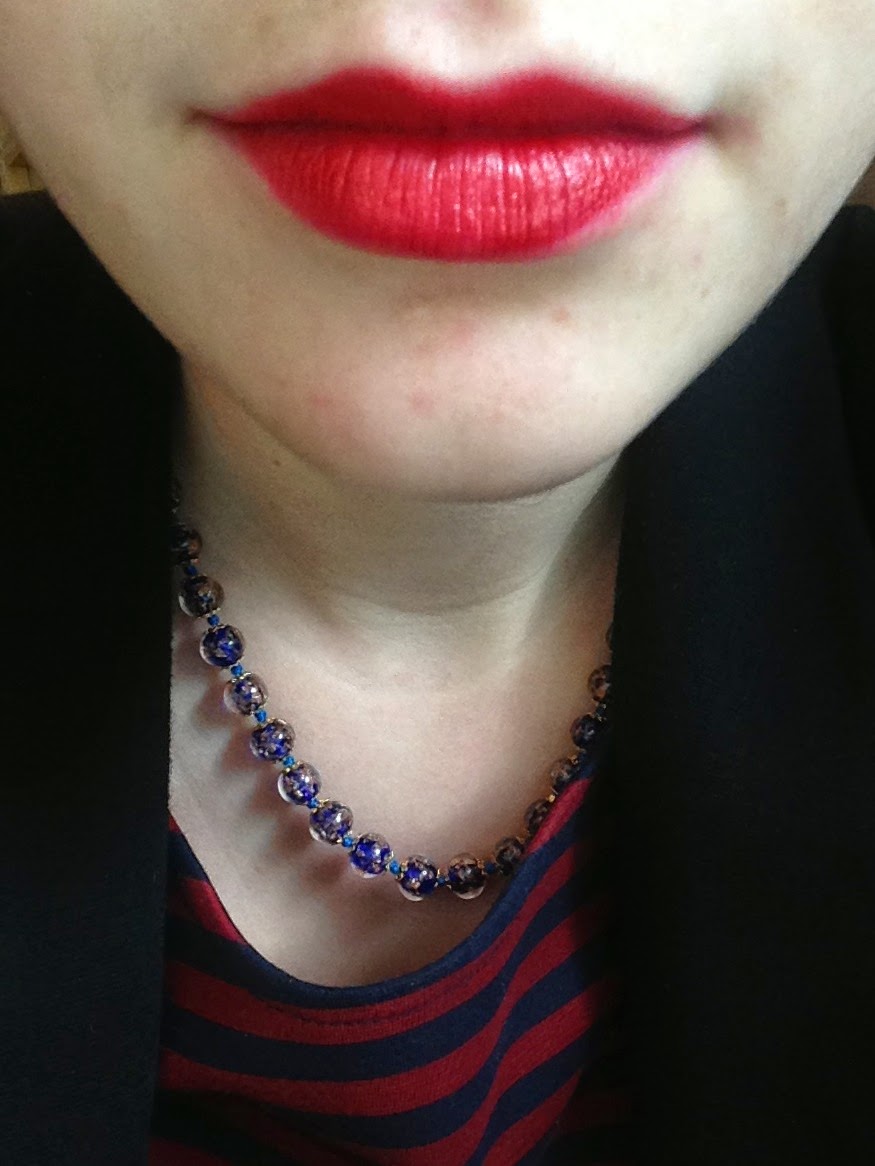 I kept the rest of my face simple (as if I ever do anything else...) with Maybelline Bad to the Bronze eyeshadow and One by One mascara on my eyes and a light dusting of NARS Coeur Battant blush on my cheeks. 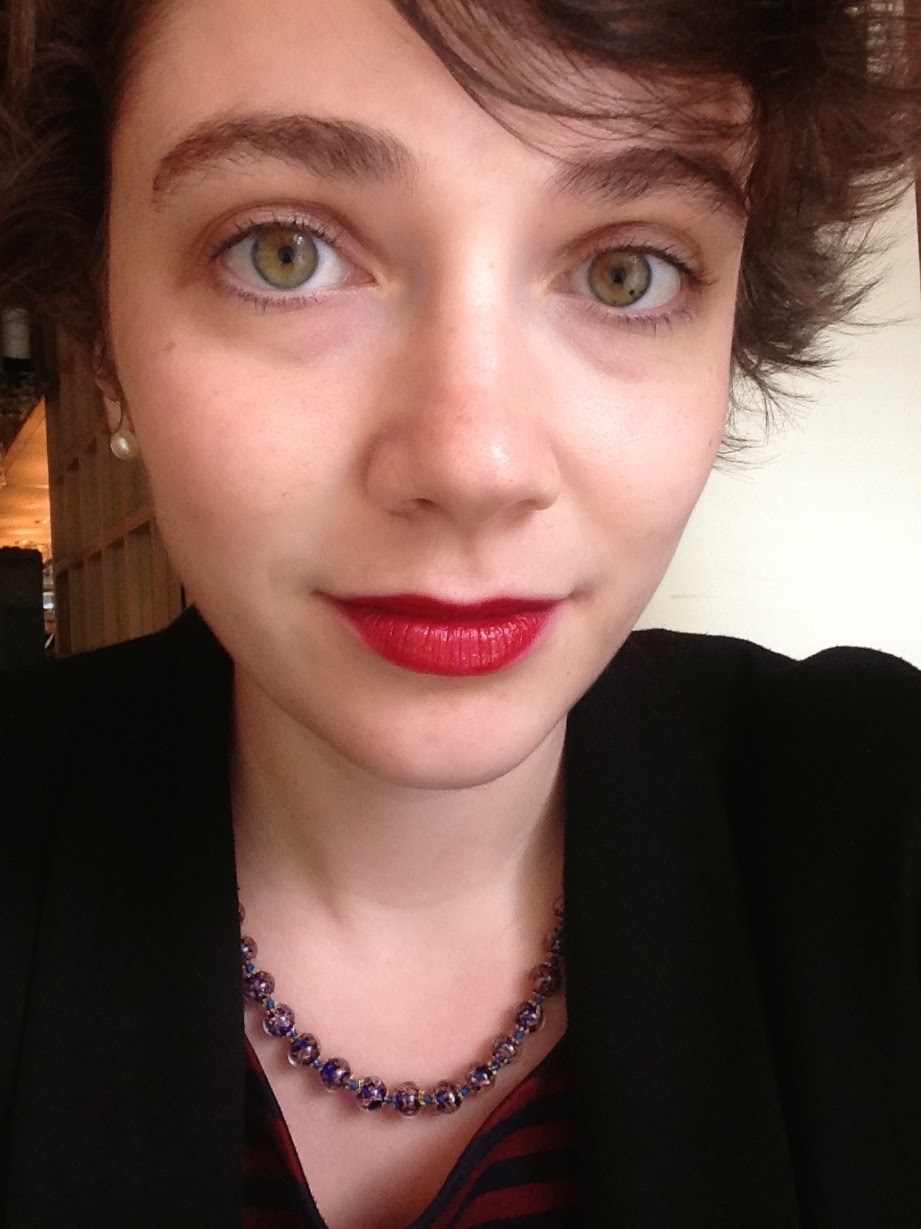 I used to keep my distance from any red with a hint of brown, but there's something so sexy-sullen about a dark brick red. When I first saw Across the Universe on the shelf, I remembered Teresa's review of the Dior Fluid Stick in Vie d'Enfer, and remembered too that I didn't own a comparable color--and so lemmings are born. I love how un-playful and take-no-prisoners this color is; I wouldn't hesitate to wear it to a professional event. 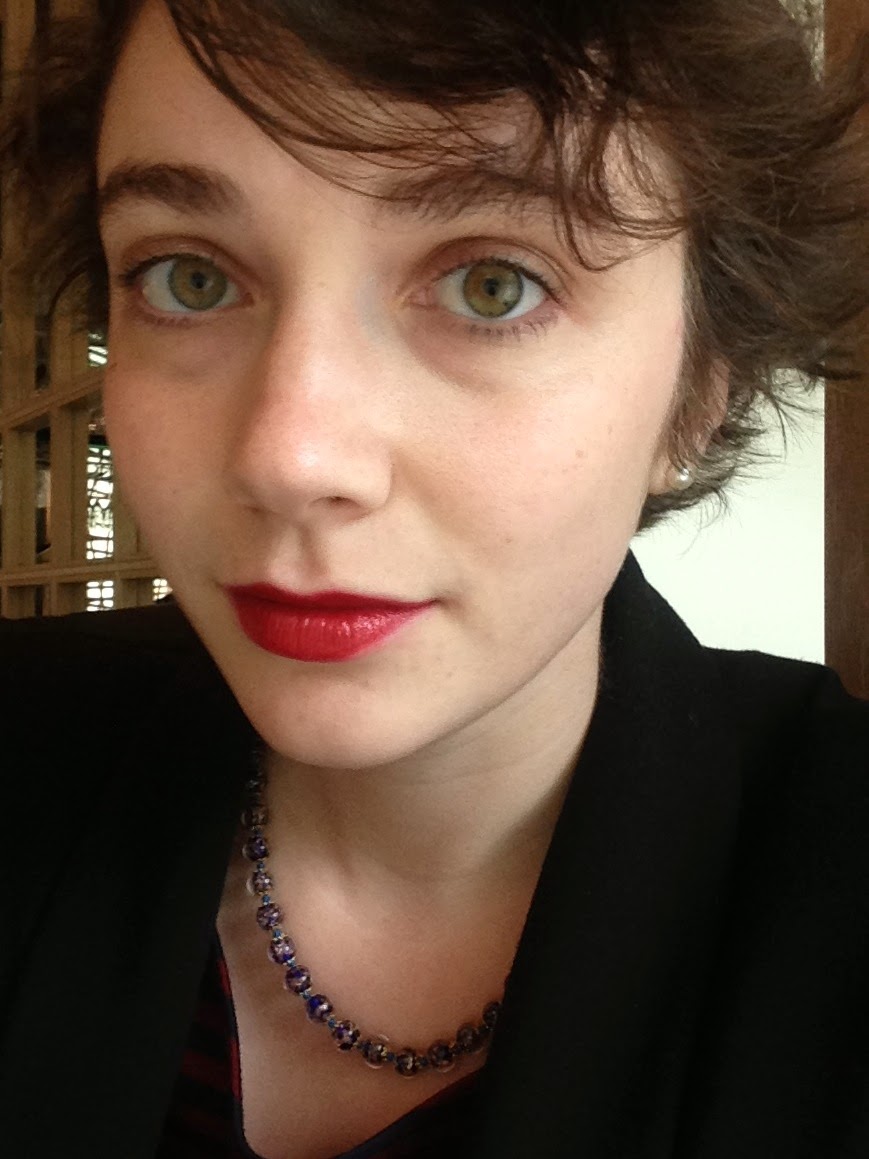 Though I should note that at the fancy bar we went to last night, a man accompanied by another woman checked me out very obviously. Our British guide to Venice included an offensive warning against the "Latin roving eye," but I'd argue that there's more to fear from the British roving eye. Witness the Spectator, April 23, 1711: "I intend, by the Advice of my Friends, to set up for an Ogling-Master. I teach the Church Ogle in the Morning, and the Play-house Ogle by Candle-light."

What really impressed me about Across the Universe was its wear time. On the left is the freshly applied lacquer; on the right, what remains after three hours, three cocktails (drunk through straws, admittedly), and Indian food. I never expect a lipstick to stay pristine through a meal, and consider it a nice bonus when any color at all sticks around, so this was a very nice bonus. I was also surprised that such a long-lasting formula wasn't drying; the dryness you see on my lips was there before I put on the lacquer. No, I'm not topless in the second photo.

I was all set to do an FOTD with Flushed today, but I woke up to clear skies and warm weather. Thanks for invalidating my makeup purchases, England! Luckily, I won't have to wait more than 24 hours before the weather turns again and I can wear plum blush in good conscience.

*Yes, I had to look up the difference between "metonymy" and "synecdoche" for the millionth time.
Posted by auxiliary beauty at 8:17 AM