AB Goes to Birmingham (and Ulta)

Greetings from Birmingham, Alabama! I've been here for a few days to see my boyfriend, who is visiting his parents. This means, of course, that I've also been to Ulta. The company has no outposts near where I live, and I have yet to see one in San Francisco, where my parents live, so what was I to do when I finally found myself in physical proximity to an Ulta? Not go? Come on.

The great and unusual thing about Ulta is that it sells both drugstore and high(ish)-end products, as well as a few brands that I normally have to buy online, such as NYX and Zoya. The more expensive brands at Ulta (e.g. Urban Decay, Too Faced) tend to have a young target demographic: no Guerlain or YSL or even NARS, more's the pity. I tend to be less interested in those shelves than in the drugstore stuff and the overwhelming selection of nail polish. Today I picked up three nail polishes and a lipstick: 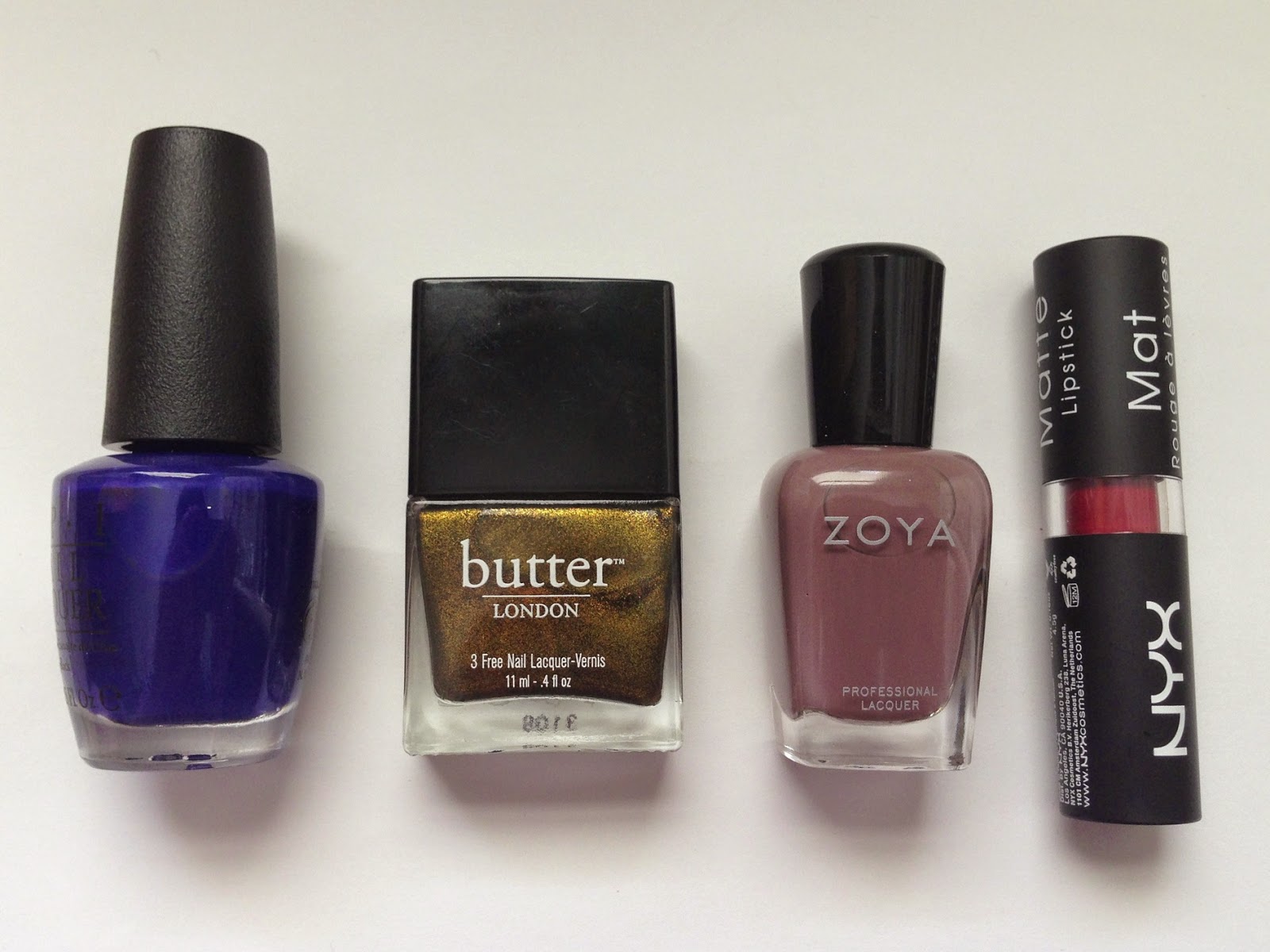 Left to right: OPI Eurso Euro (a birthday present for my stepmother--I already have a bottle), Butter London Wallis, Zoya Normani, and NYX Matte Lipstick in Alabama (!). I'll eventually review the things I bought for myself, but for now, a few quick notes:

Eurso Euro, whose praises I've already sung here, is my favorite nail polish on earth. A vibrant cobalt blue creme in a smooth, self-leveling, long-lasting formula: could there be anything better? World peace, perhaps. 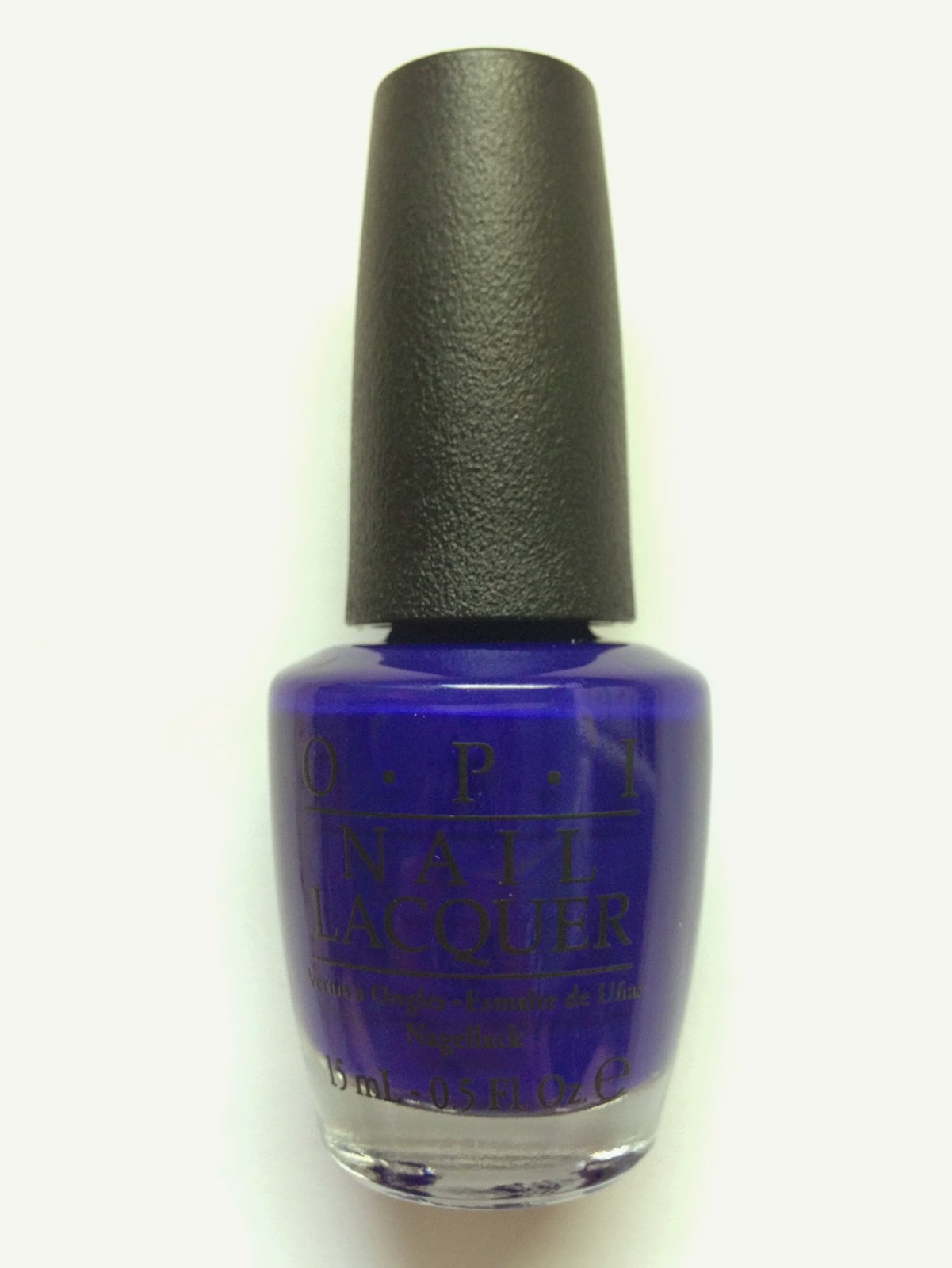 I notice, looking at the bottle now, that the official name of this polish is "OPI...Eurso Euro," which means I should have referred to it in the first instance as "OPI OPI...Eurso Euro."

Butter London Wallis is a greeny-gold shimmer polish that I've wanted for at least two years now. I often develop long-term lemmings, but today I decided that for this one, at least, enough was enough. I think Wallis is a perfect color for fall: it looks like moss in an enchanted forest. 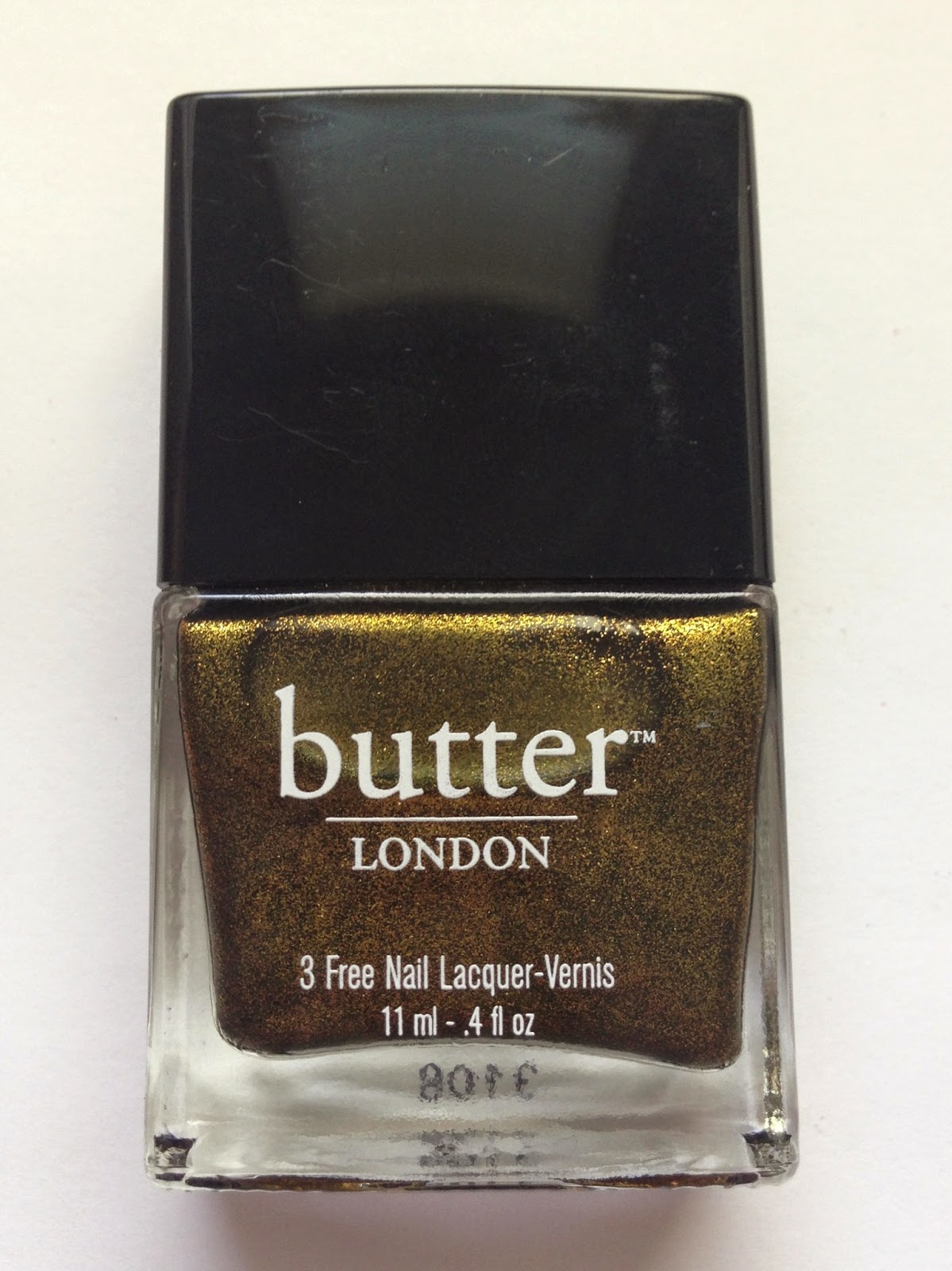 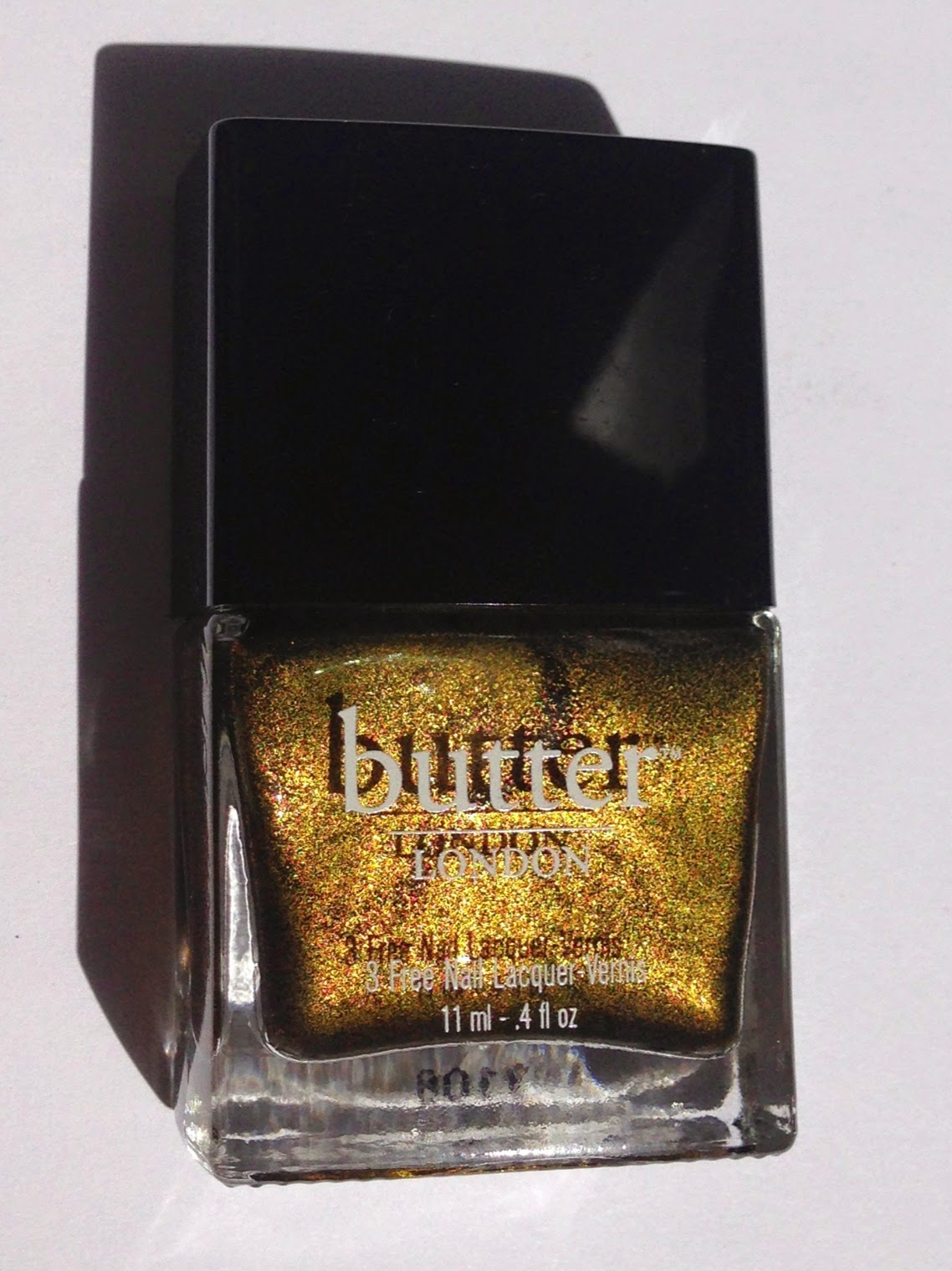 Normani is a purple-gray-mauve creme, the darkest shade in Zoya's six-piece Naturel collection, which came out early this year. The idea of the collection was to provide six variations on the theme of "nude." Normani had never caught my eye until I saw it in person today; it looked like a nice take on the gray-taupe nail polish that shows up every fall. 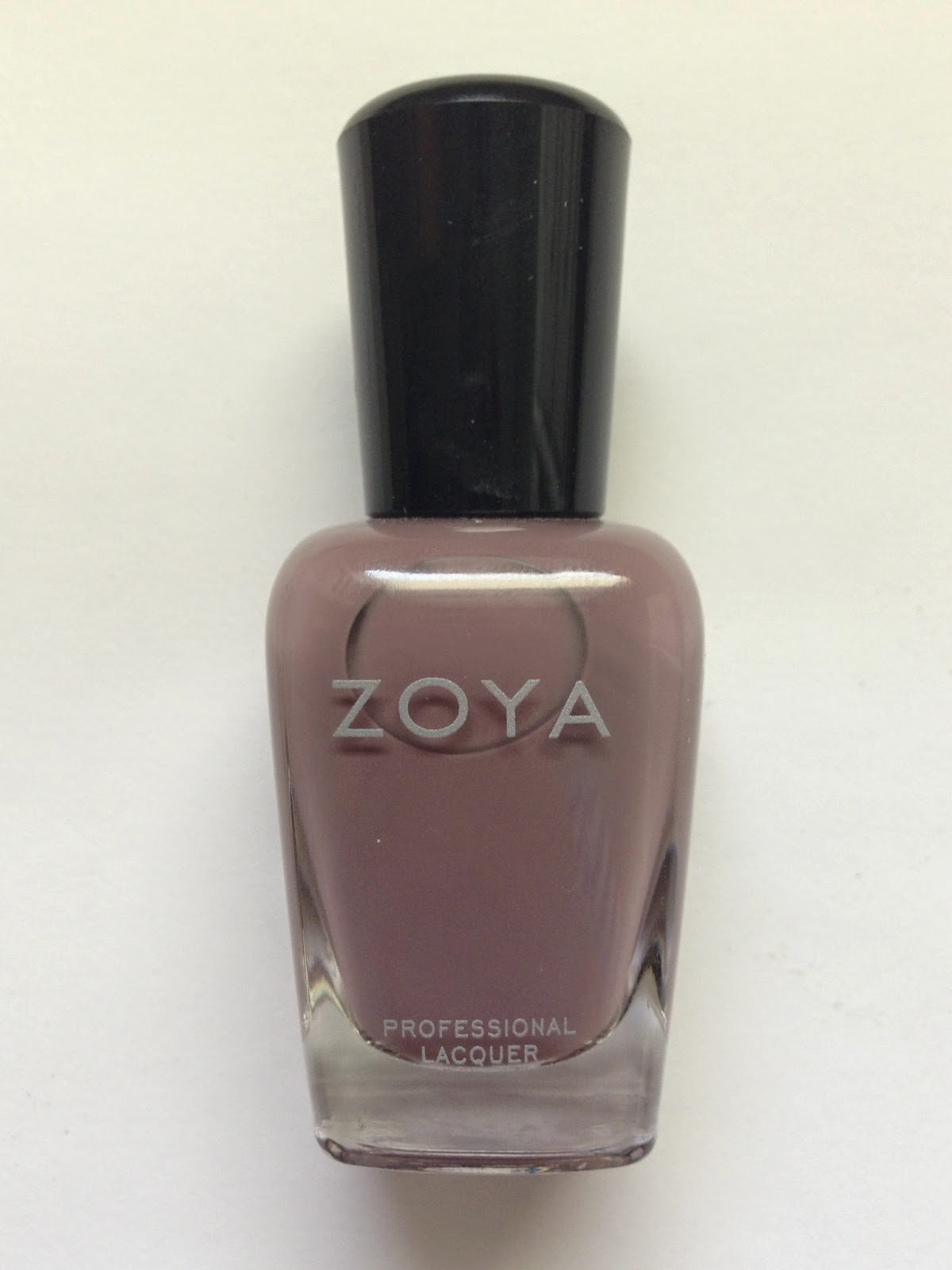 Speaking of Zoya, the order that I placed during the July 4 promotion took three weeks to ship, meaning that it arrived a few days after I left town. And since I'll be gone for the next month, I just have to hope that the package will still be waiting on my doorstep in late August. A week after I ordered, I called Zoya to ask why I hadn't received so much as a confirmation email, and was told that it could take as long as five weeks for the orders to be processed and shipped. I'm not exceedingly happy with Zoya right now. (So, of course, I gave them more business.)

Finally, NYX Matte Lipstick in Alabama is a dark brownish red that looks very similar to Rimmel Across the Universe. I could have lived without the NYX, but I mean, I'm in Alabama right now; I just had to get it. Plus, experience has taught me that I prefer lipstick bullets to liquid lipsticks, and NYX makes my very favorite matte lipstick formula. Too bad the product comes in such cheap-looking packaging: 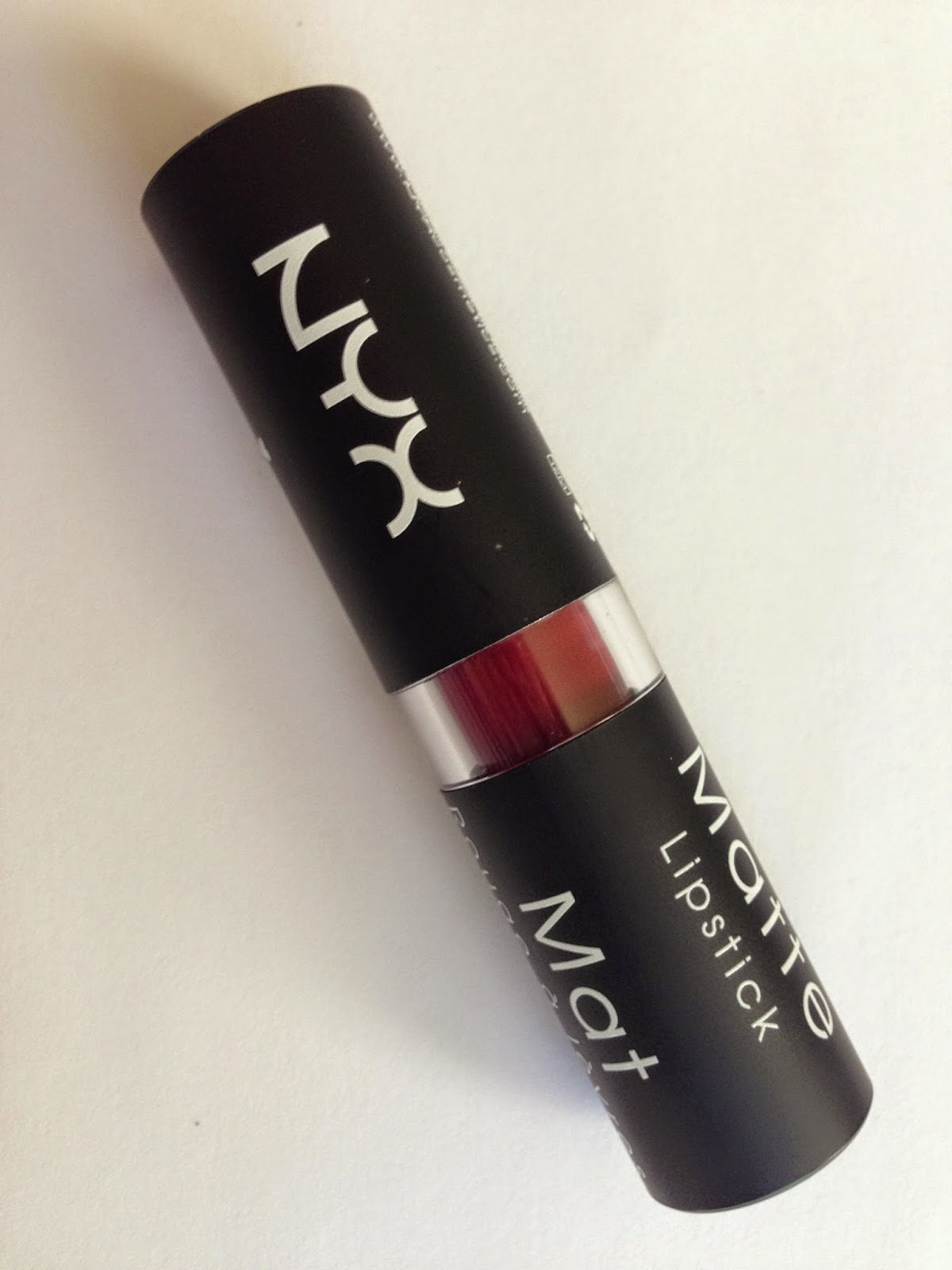 I admit that the shiny bullet with its perfectly crisp edges makes up for a lot. 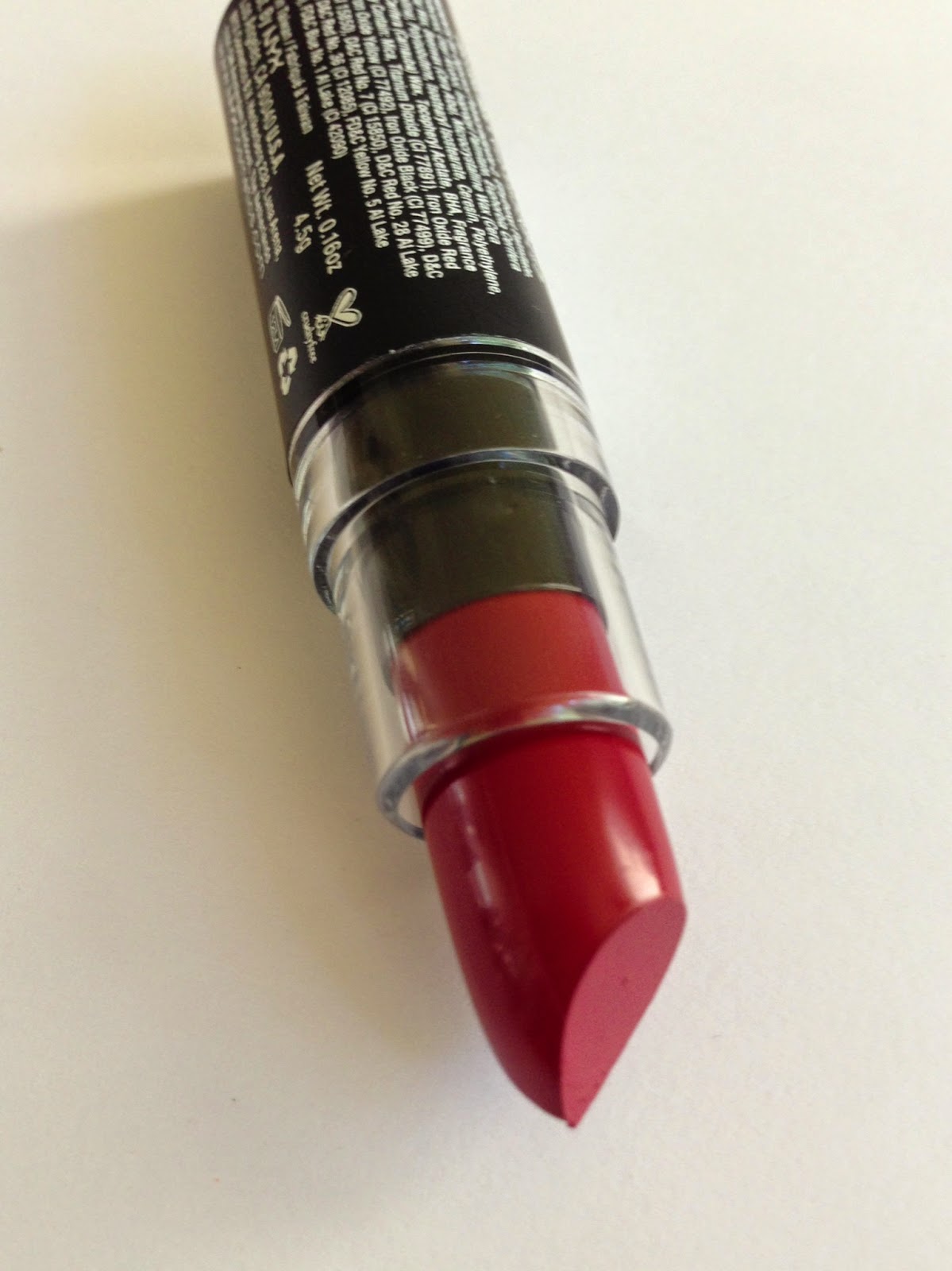 That said...well. I know I've mentioned that I don't care much about packaging as long as the product works, but NYX really tests the limits of that principle for me. 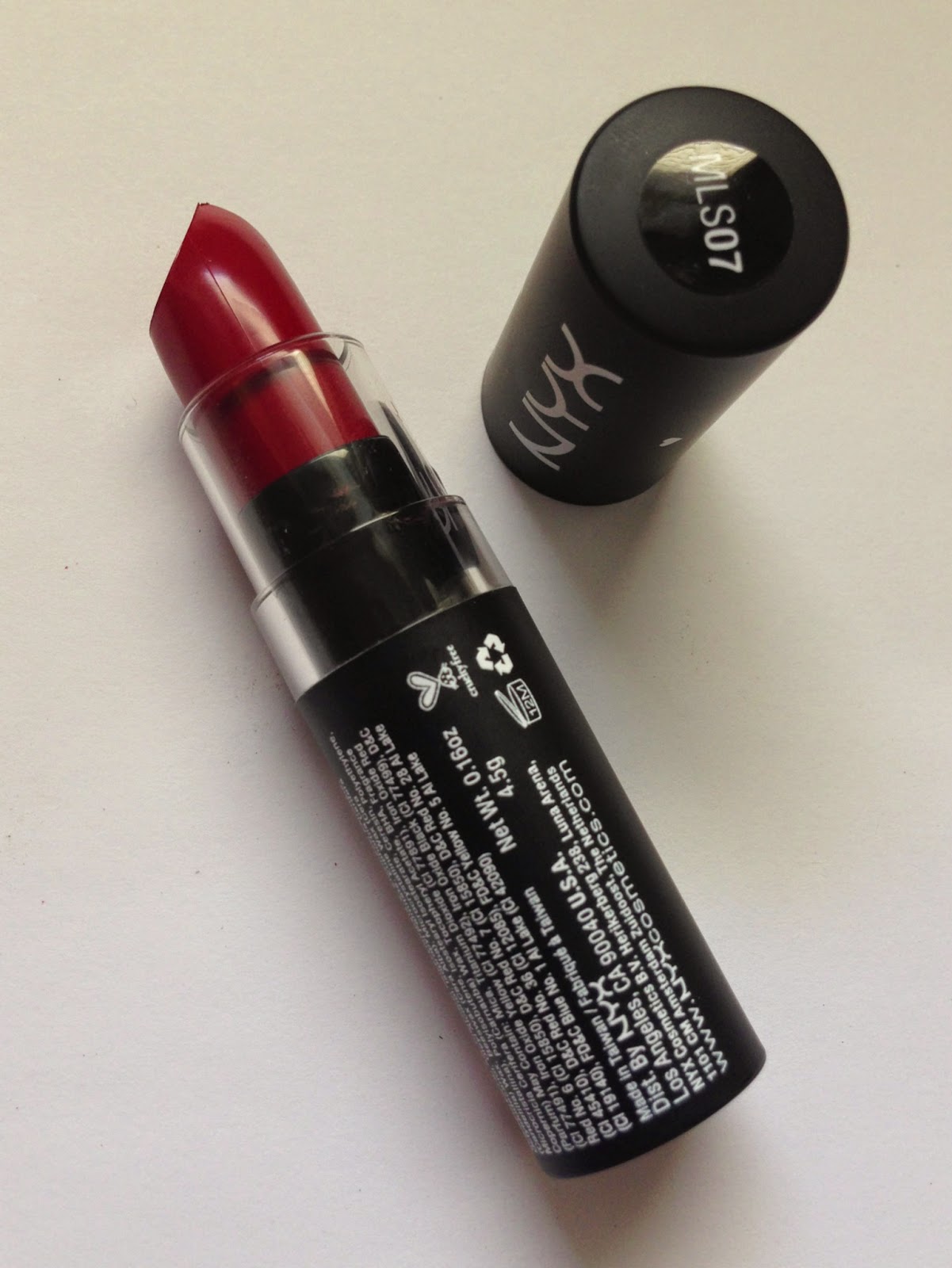 Ulta also had a small handful of NYX's new Macaron Lippies in stock. I'd been curious about Lavender for a while and was excited to see it on the shelf, but the only one available had obviously been used. In fact, it had a smear of another lipstick on it. This is why drugstore makeup needs testers, people! Why can't American stores provide them? I've been consoling myself by reflecting that the Macaron Lippies have received unenthusiastic reviews, but I suspect I'll end up with Lavender sooner or later.

I also wanted to show you my makeup from last night, when my boyfriend and I went to dinner with his undergraduate adviser. I had a hard time finding decent lighting for a photo, so I had to content myself with a car selfie. I'm wearing Maybelline Bad to the Bronze cream shadow, theBalm Silly powder shadow, and Maybelline One by One mascara on my eyes; Illamasqua Zygomatic cream blush on my cheeks; and on my lips, Maybelline Vibrant Mandarin lipstick, which transforms from a red-orange coral to a pink-red coral within five minutes of application. Wizardry. It was the first time I'd worked with powder eyeshadow in almost a month, and picking up a brush again felt daunting, like those nightmares in which you're about to perform in a play without having memorized your lines. 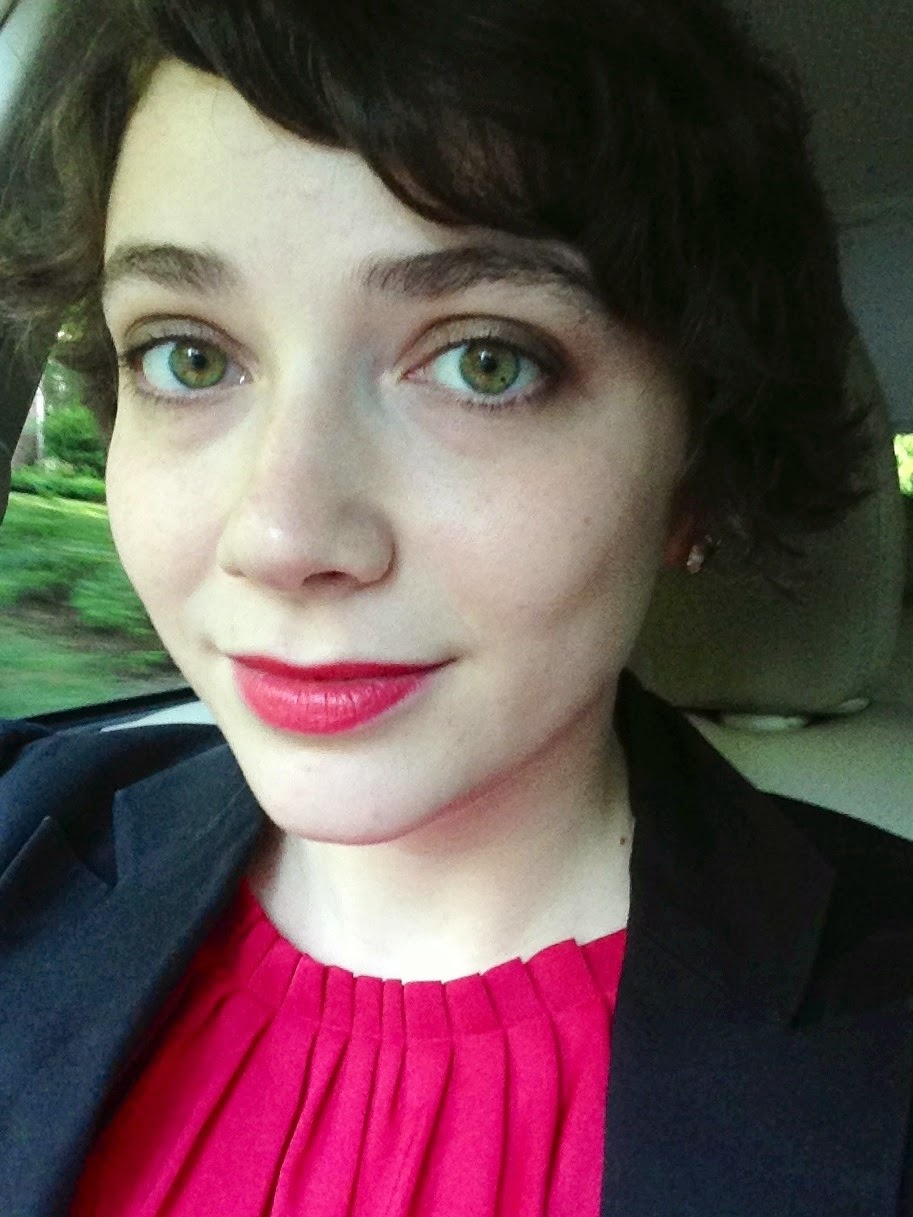 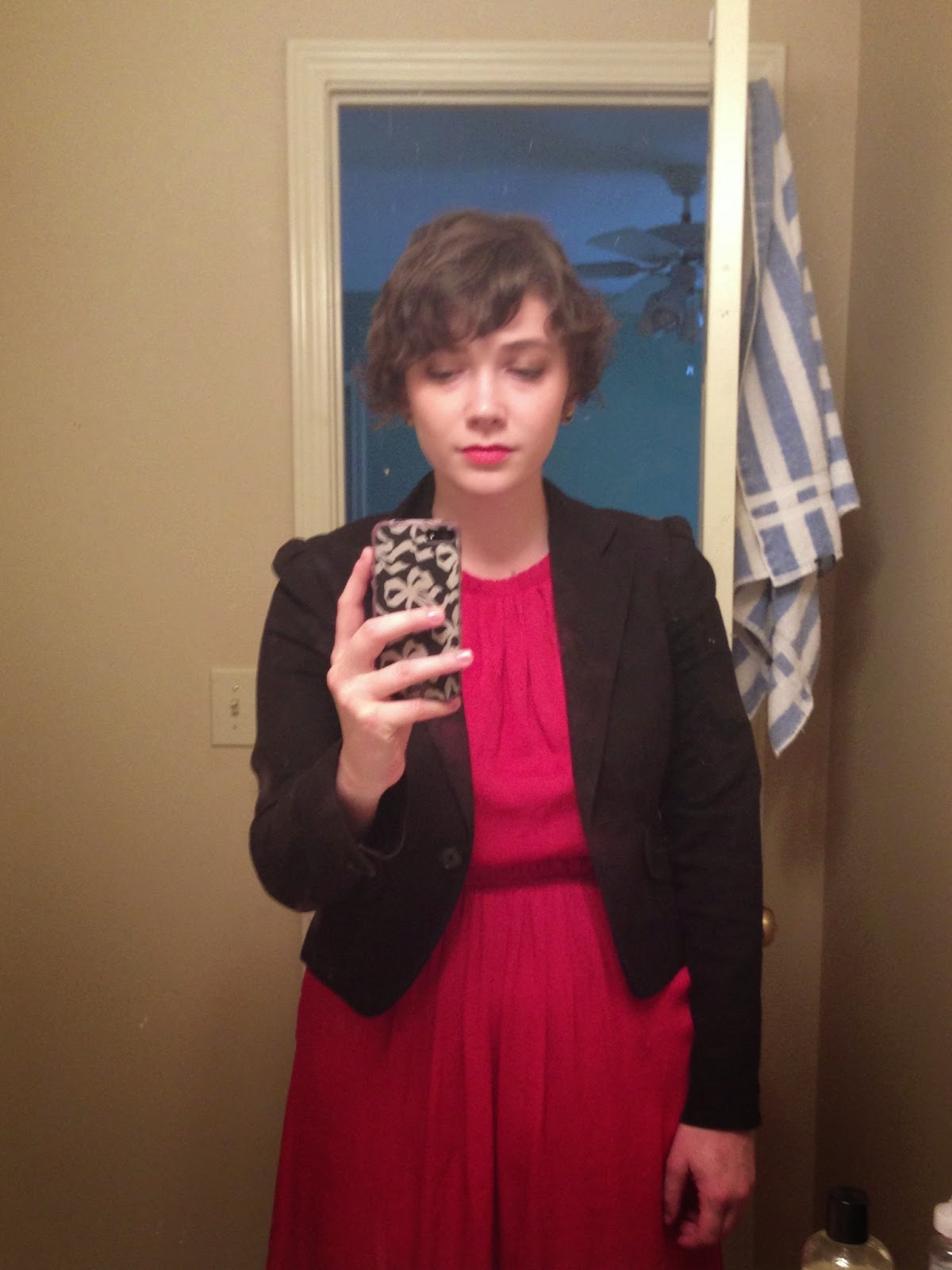 Today is my last day here. This morning we went to a farmers' market held in an old Dr. Pepper bottling plant, and I had a peach that practically glowed. Apparently, Chilton County grows some of the best peaches in the country. 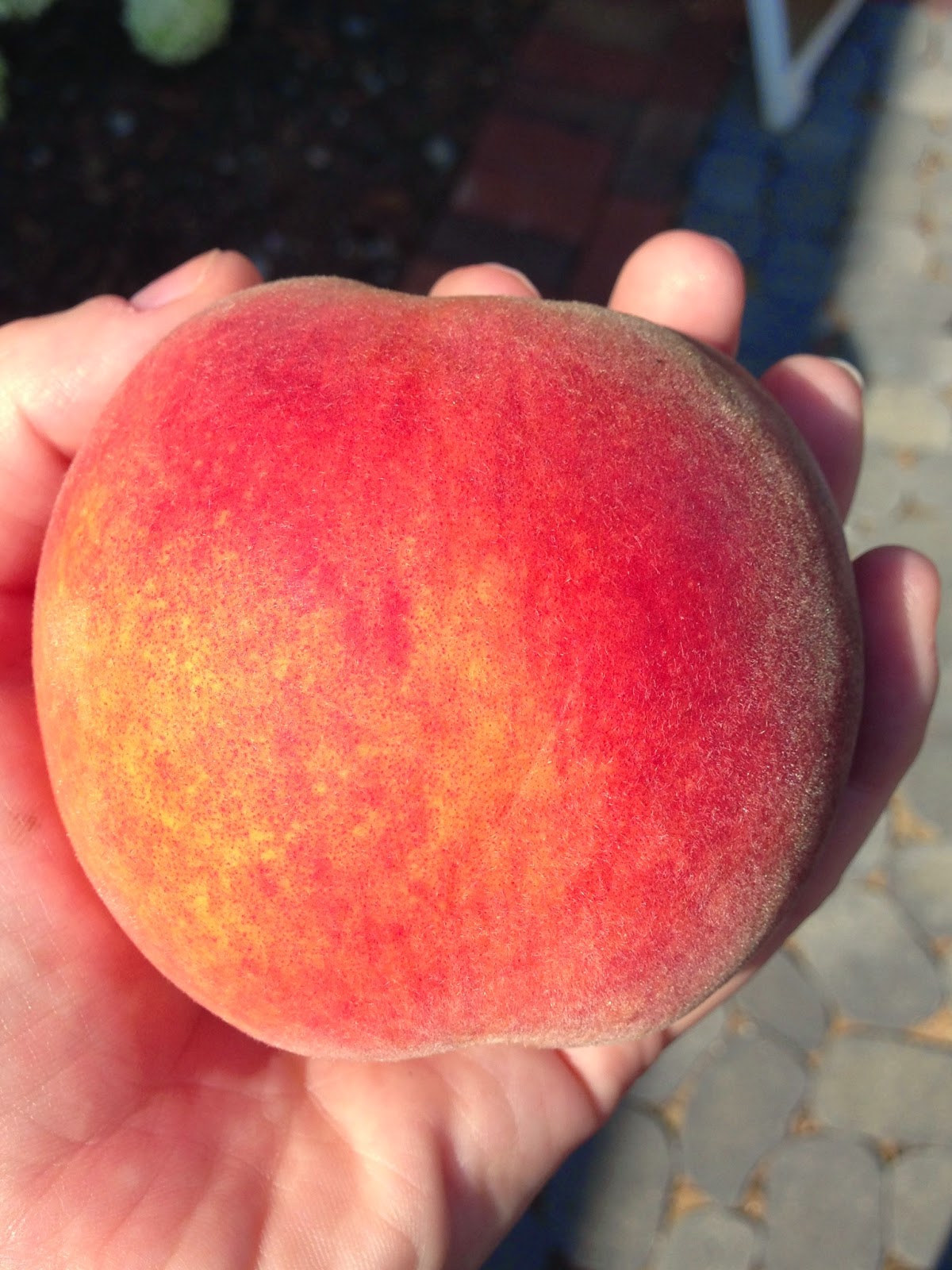 I always enjoy the dominant architecture of Birmingham: lots of 19th- and 20th-century brick buildings, many of them repurposed factories or warehouses. 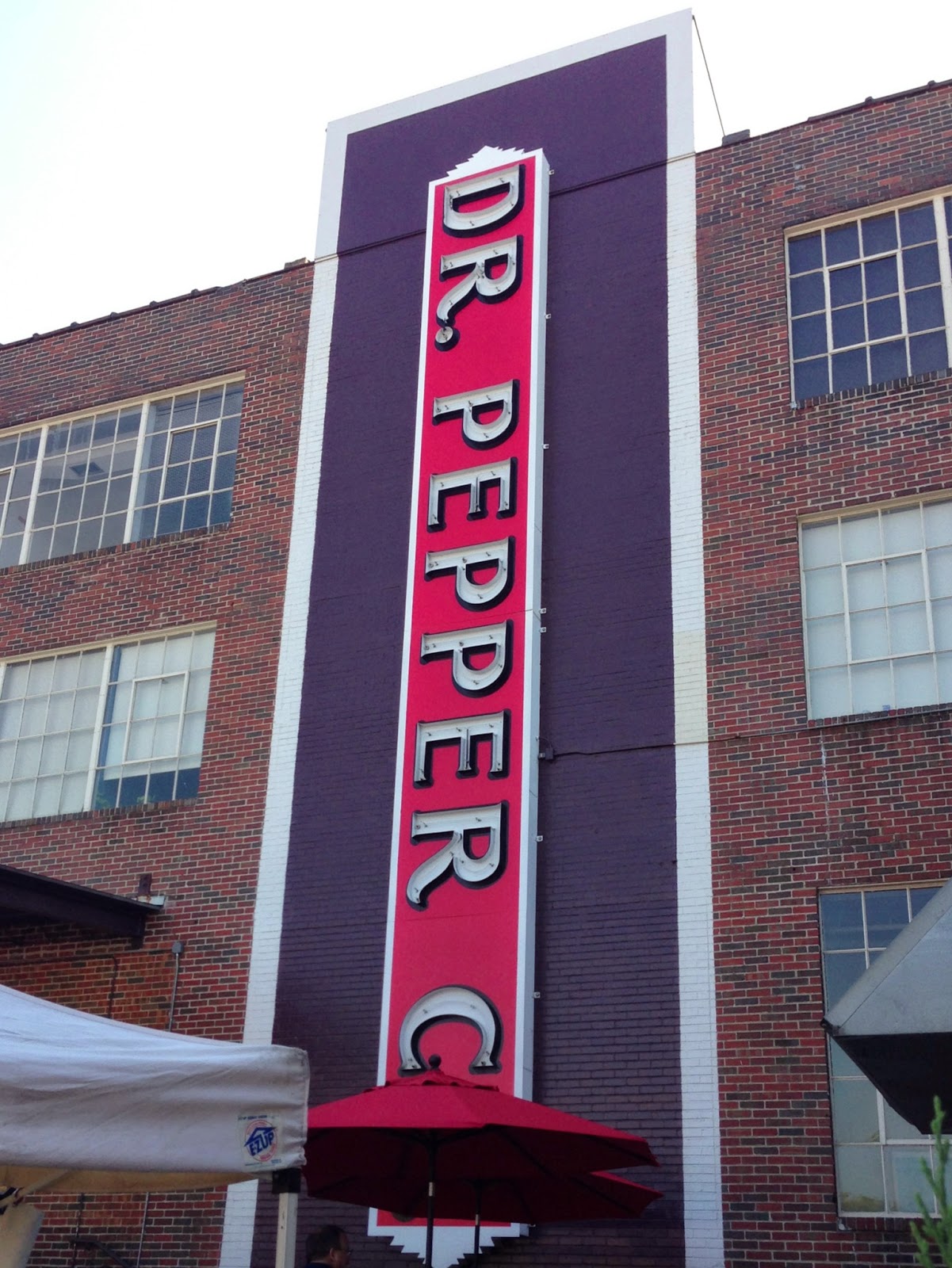 I liked this hardware store, too: 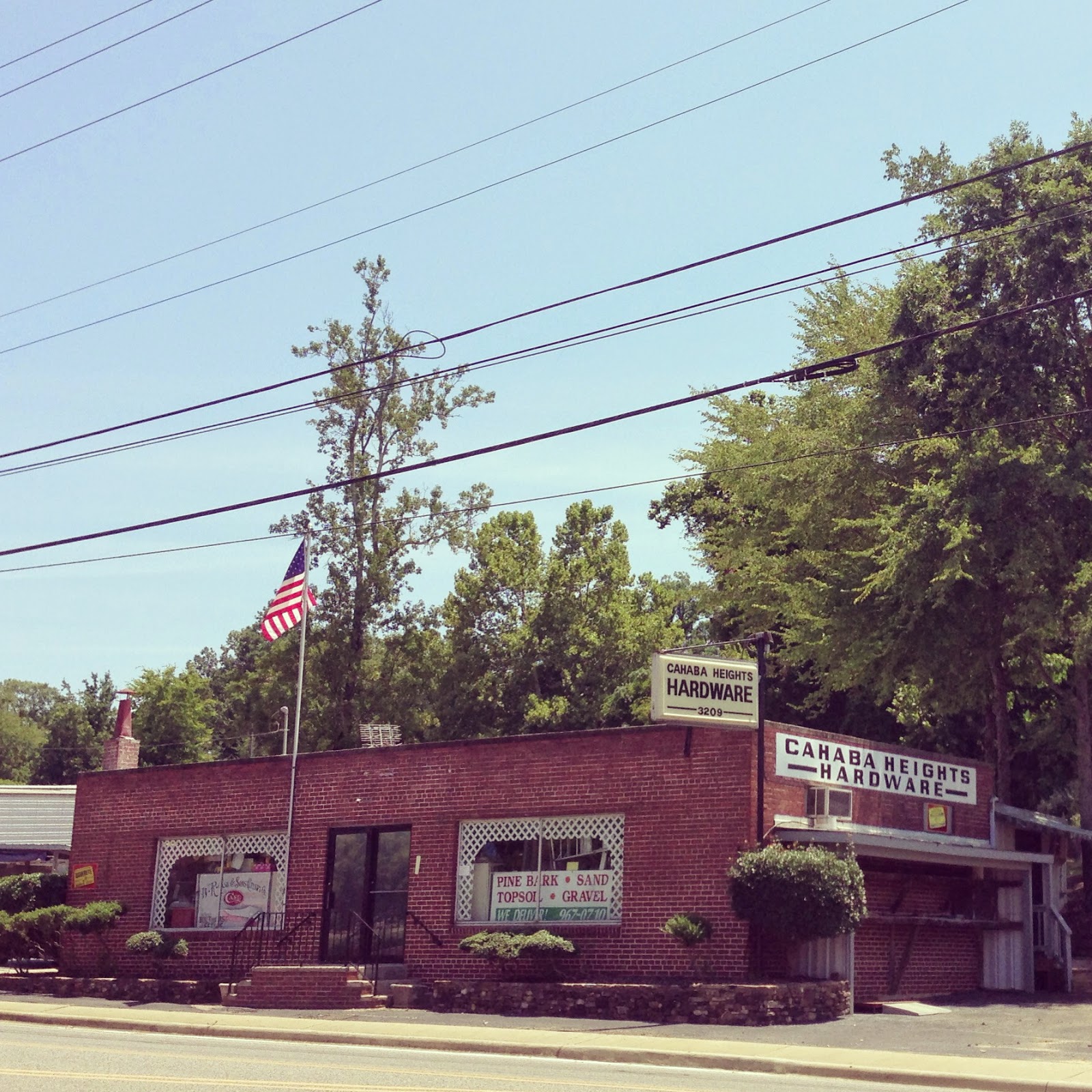 Tomorrow I move on to Florida, where my mother has been visiting my grandmother for the past week. I still haven't finished that article, and Internet access at my grandmother's house tends to be spotty, so my blog might be semi-quiet for a while. I seem to have lost some of the blogging energy I had at the beginning of the summer, as well as the inclination to wear more than four products at a time in this heat and humidity. And it's always the same four products, and you've seen most of them on this blog already. But I'll be in San Francisco before long to see my parents, and the colder weather might snap me out of my beauty malaise. We'll see.
Posted by auxiliary beauty at 6:19 PM