The Only Tattoos I'll Ever Have: Maybelline Color Tattoo Eyeshadows

All right, that title is a bit of an exaggeration. I'm not completely sure I'll never get a tattoo. But given my indecisiveness, fear of commitment, and habitual buyer's remorse, I can say the odds are very slim. I do, however, own five Maybelline Color Tattoo eyeshadows. I'm not the first person to consider the Color Tattoos (with a couple of exceptions) some of the best beauty products at the drugstore. They're cream eyeshadows in adorable, satisfyingly heavy glass pots, and they can be used either on their own or as long-lasting bases for powder shadows. Most of us have heard that cream eyeshadows should be stored upside down (I trust this isn't a myth...?), but I'd probably never remember to do that if not for the ingenious design of the Color Tattoos. The glass "lid" is actually the pot that holds the product, while the black plastic "bottom" is the screw-off lid. I've never encountered another drugstore product packaged in real glass; it feels almost luxurious. The colors all have "edgy" names (tattoos = edgy, dontchaknow), because Maybelline hasn't realized that few things are more ridiculous than a major cosmetics brand pretending to be streetwise. See also their "Street Art" nail polishes. 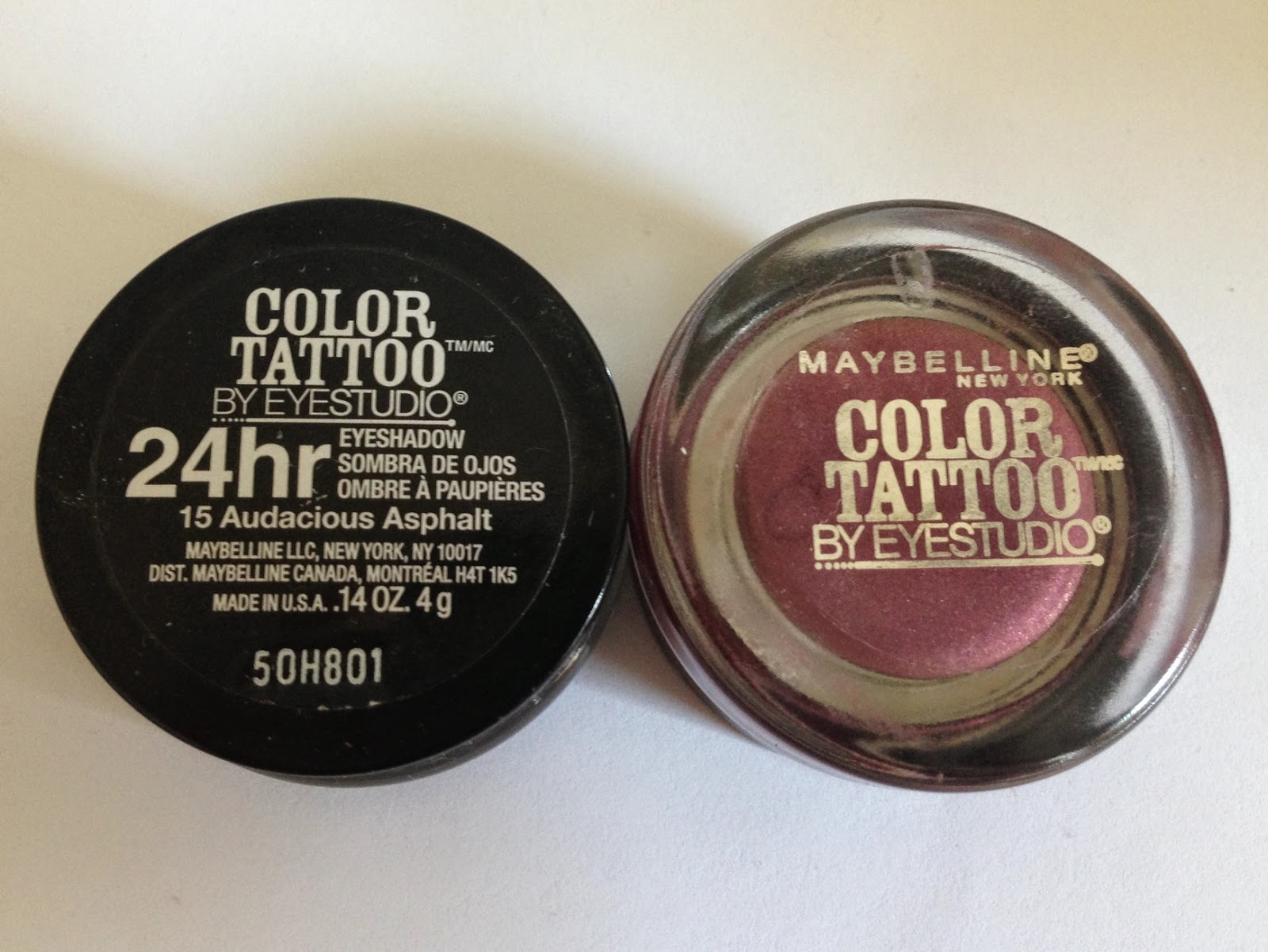 The official name of this product is "Eye Studio Color Tattoo 24HR Cream Gel Eyeshadow," which...whatever. The 24-hour claim mystifies me, as most people wash their faces more than once every 24 hours. I have, however, fallen asleep in my makeup (I know, I know), and the color does stick around until the next morning. Do with that information what you will. I don't know what the phrase "cream gel" is supposed to signify, but the formula doesn't feel or look particularly gel-like to me. It's a cream eyeshadow, Maybelline. Get over yourselves.

Besides, there's nothing wrong with plain old cream eyeshadows. They're perfect for the hot, humid weather we've been having. My go-to summer eye makeup is Bad to the Bronze and mascara; boom, done. And because they're so user-friendly and versatile, the Color Tattoos are great starter eyeshadows for yours truly people who are still getting the hang of applying and blending eye makeup. I rarely use a brush with these; smearing them on with my fingers seems most effective, and can be accomplished in a few seconds. But alas, I can't recommend all the shades wholeheartedly. The five I own vary in quality from sublime (Bad to the Bronze, Tough as Taupe) to workable (Electric Blue, Pomegranate Punk) to utter shit (Audacious Asphalt). Here are some swatches to give you an idea of the significant textural differences. Left to right: Audacious Asphalt (audacious only in its resistance to blending), Tough as Taupe, Bad to the Bronze, Electric Blue, and Pomegranate Punk. Keep in mind that I bought Bad to the Bronze over a year ago, so it's not quite as smooth and buttery as it once was. Still going strong, though. 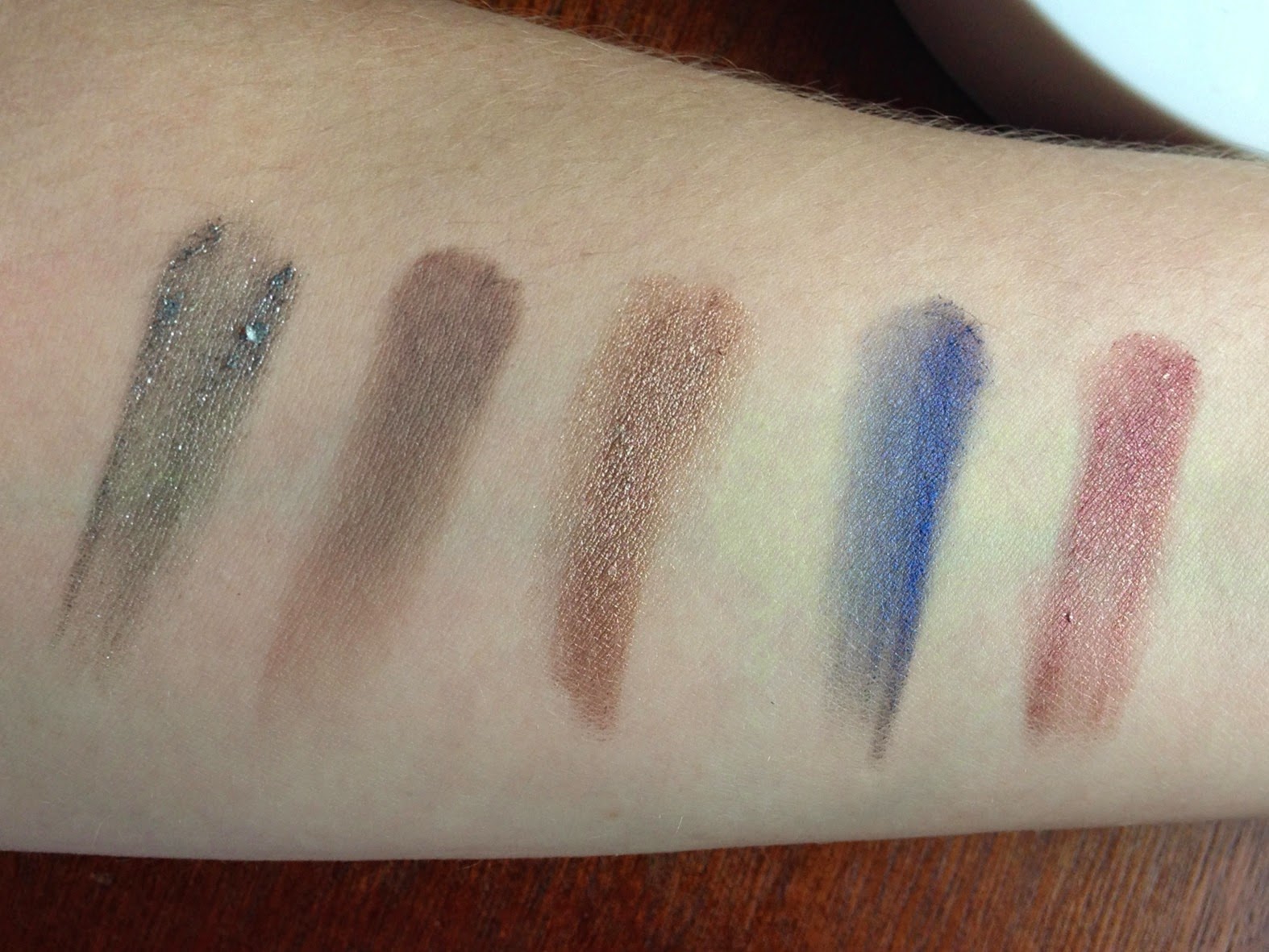 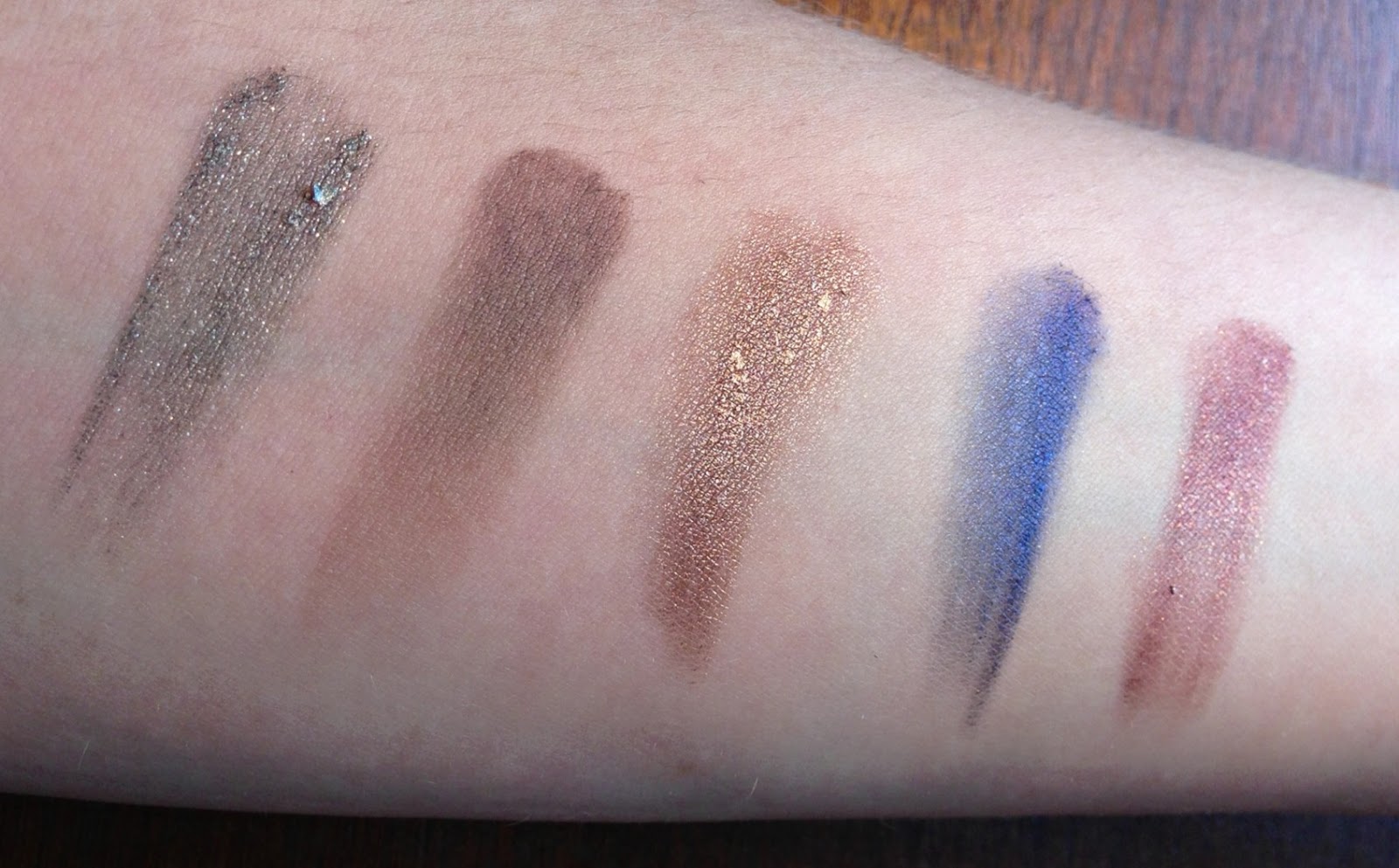 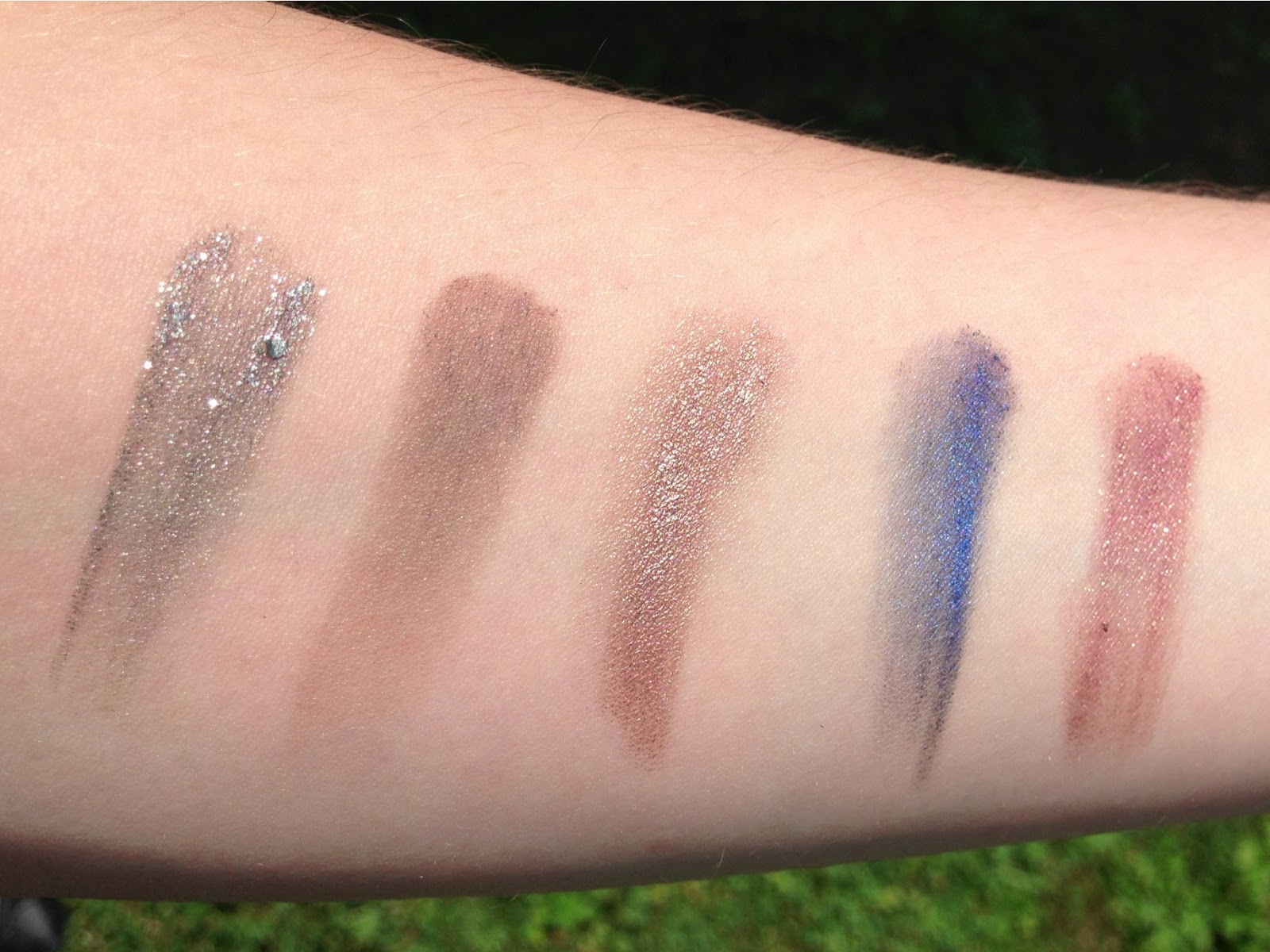 Bad to the Bronze, which I bought last May to wear to a wedding, is my favorite of the five. Most bronze eyeshadows are too warm-toned for my complexion, but Bad to the Bronze is the coolest bronze I've ever seen; in fact, I'd say it verges on taupe. Look how much of it I've used! 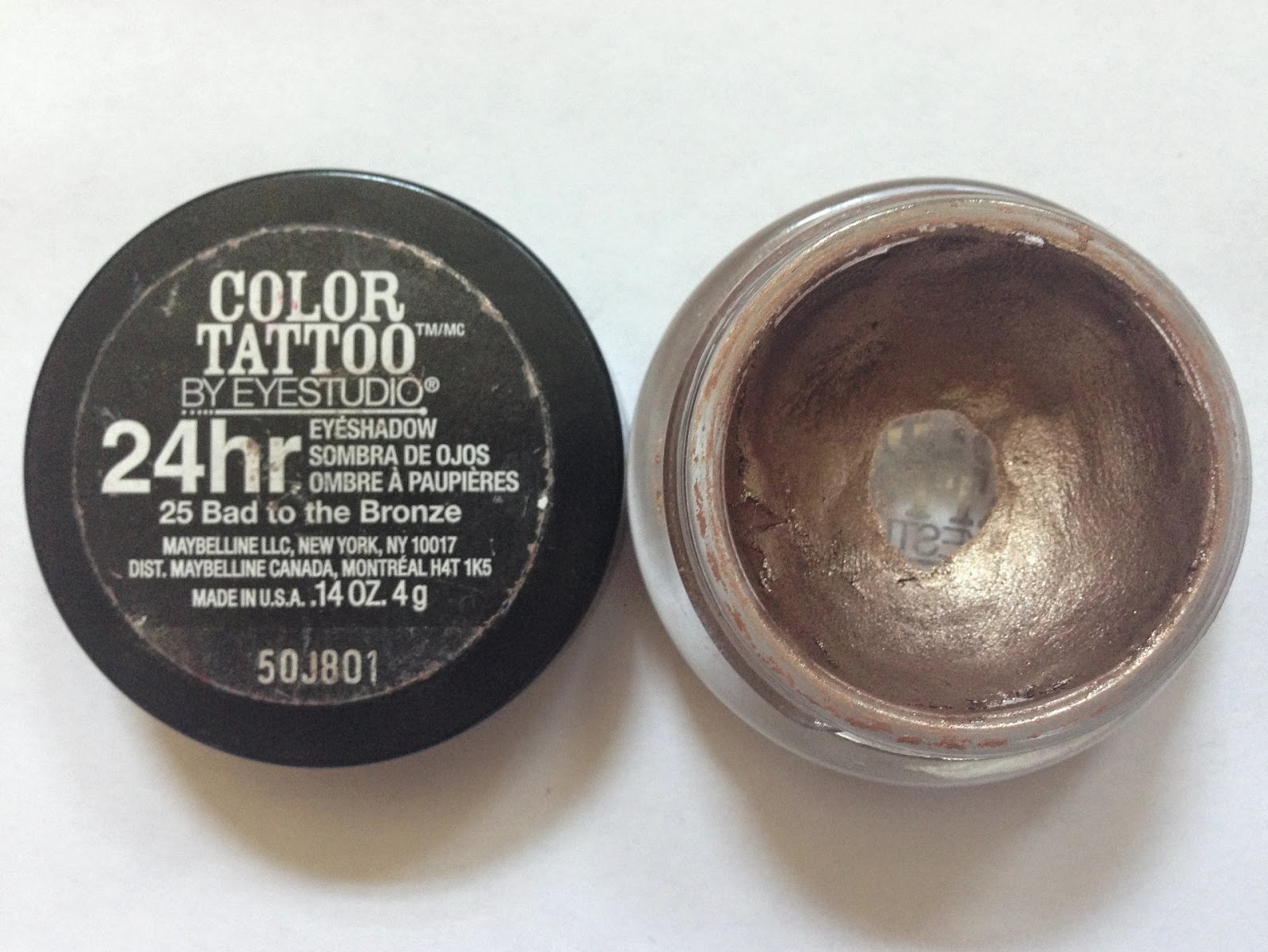 Swatched with theBalm Seductive to illustrate how cool-toned it is for a bronze. Bad to the Bronze is the one on the right; it looks almost copper next to the yellow-bronze Seductive, which I rarely use. 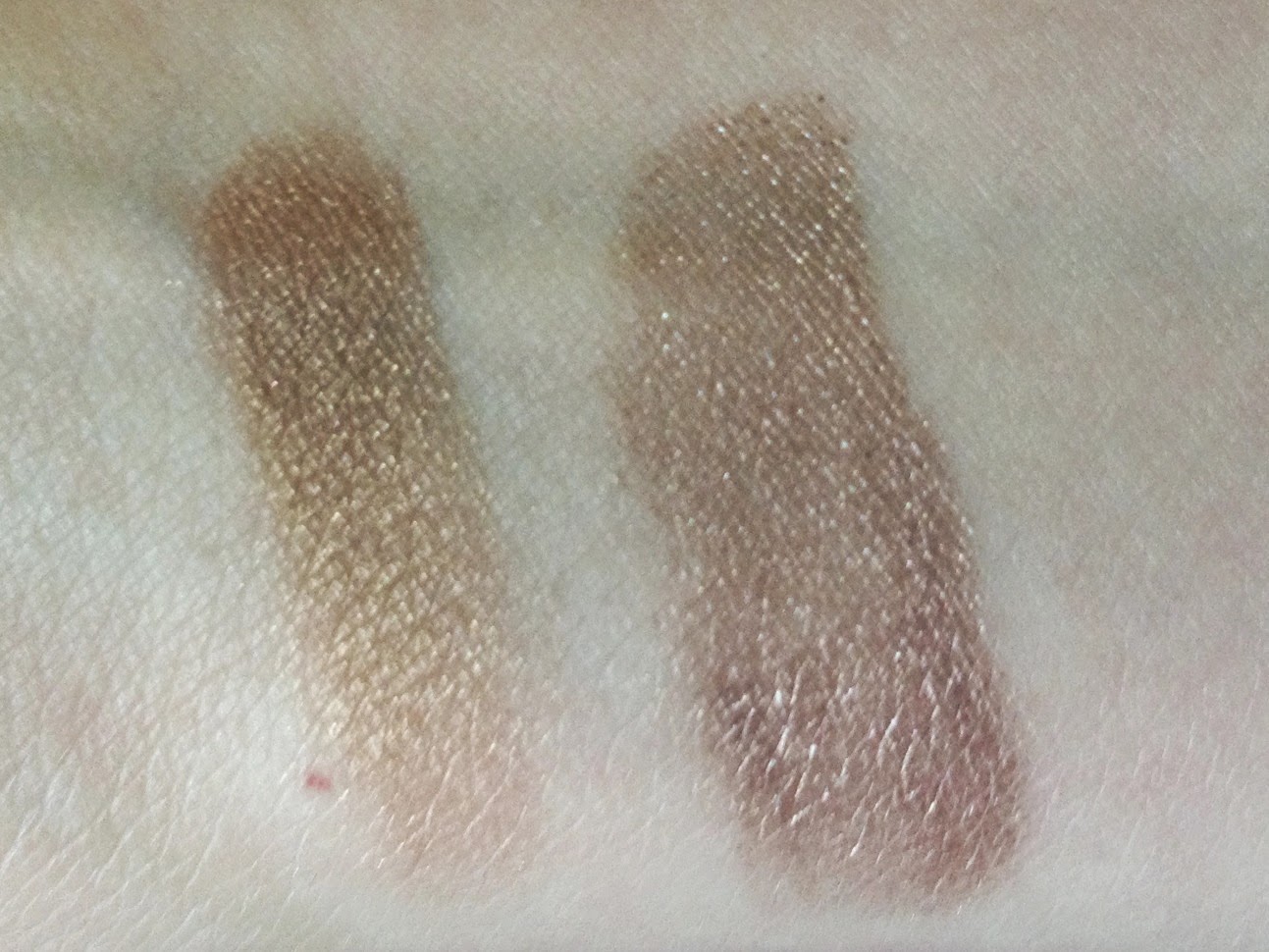 Though it's a neutral, Bad to the Bronze is bold and metallic enough that I don't usually wear it with eyeliner or other eyeshadows. It does look great with purples, though, so I'll occasionally pair it with NYX Slide On eyeliner in Jewel on my lashlines. And of course, bronze is the perfect complement for a purple or berry lipstick. Here's a recent FOTD with Bad to the Bronze, Jewel, and MAC Up the Amp lipstick. 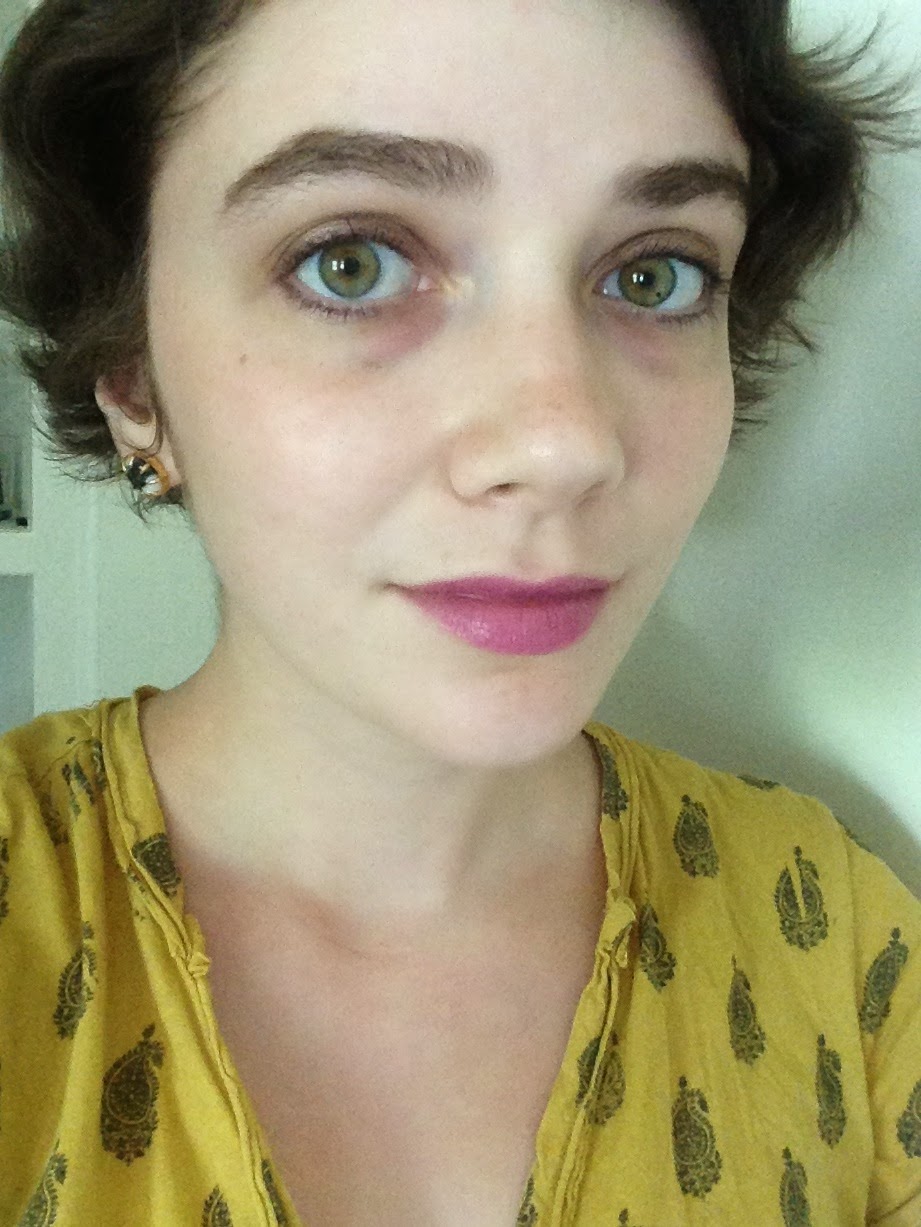 Electric Blue is a metallic navy blue that I bought last fall in order to quell my lemming for the NARS Mandchourie eyeshadow duo. 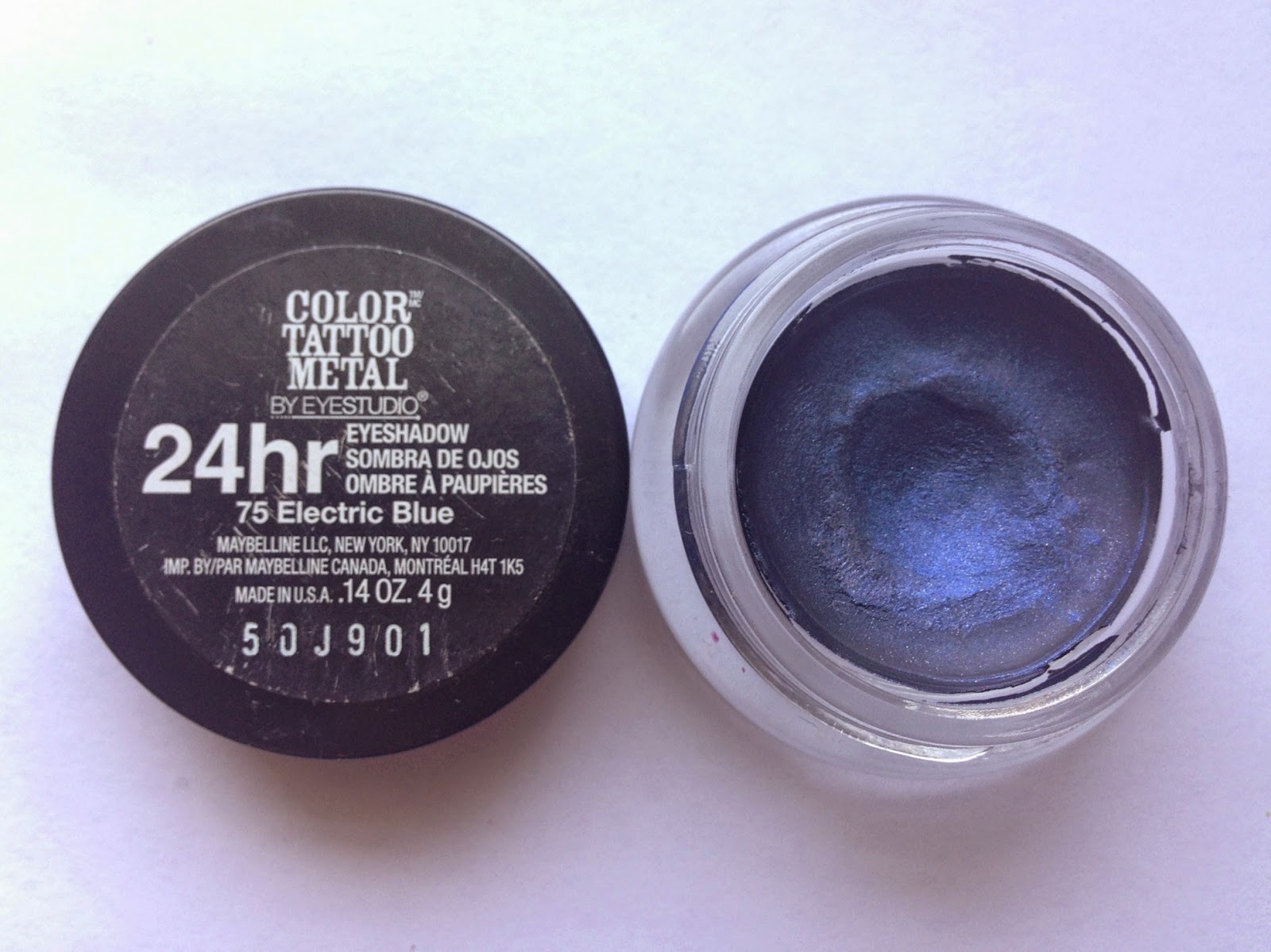 It's drier and less blendable than I'd like, but it works fine as an outer-corner accent. No comparison swatches for this one, because it's my only navy eyeshadow, but here's a FOTD from October, when I had a lot more hair! I'm wearing Electric Blue with theBalm Selfish (the taupe eyeshadow from the Nude 'tude palette), NARS Coeur Battant blush, and NARS Cinematic lipstick in Last Tango. 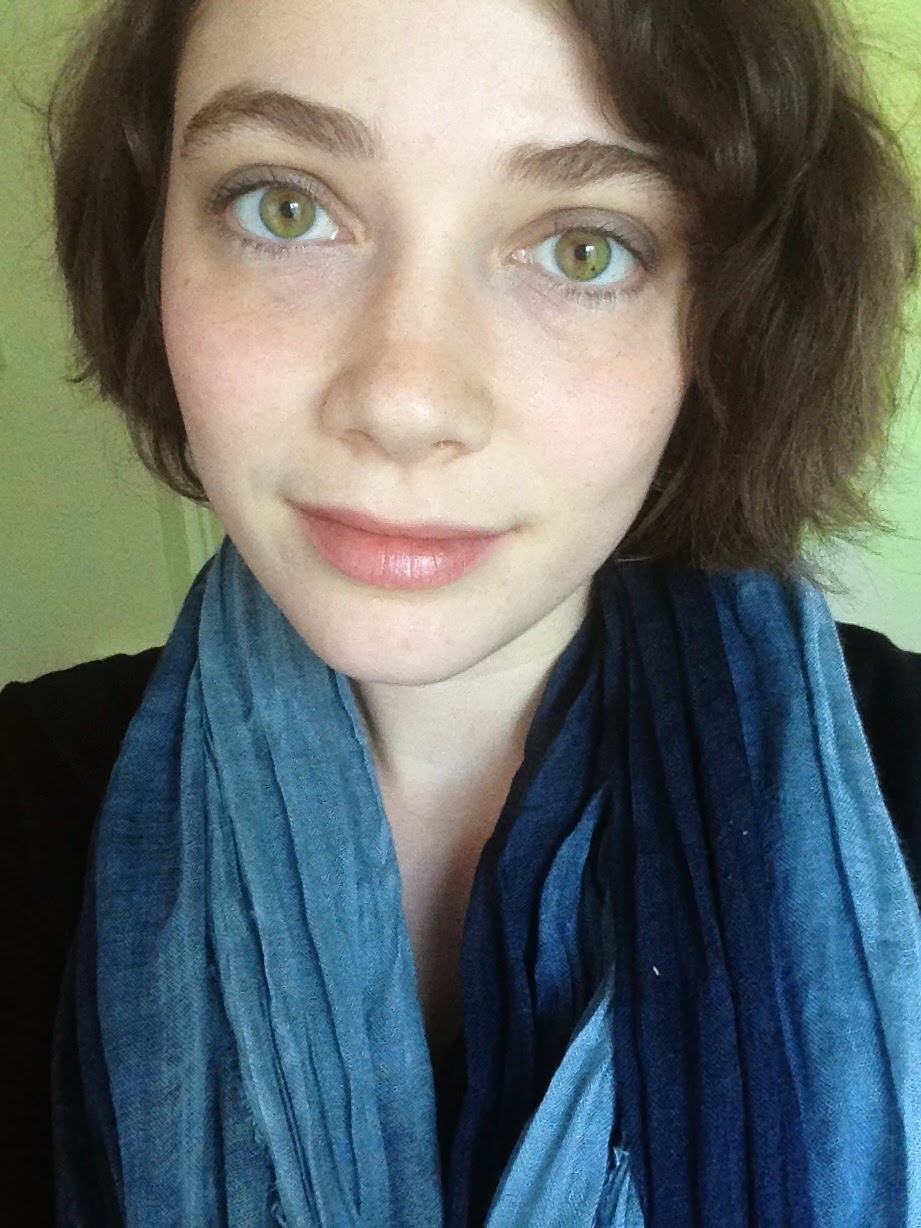 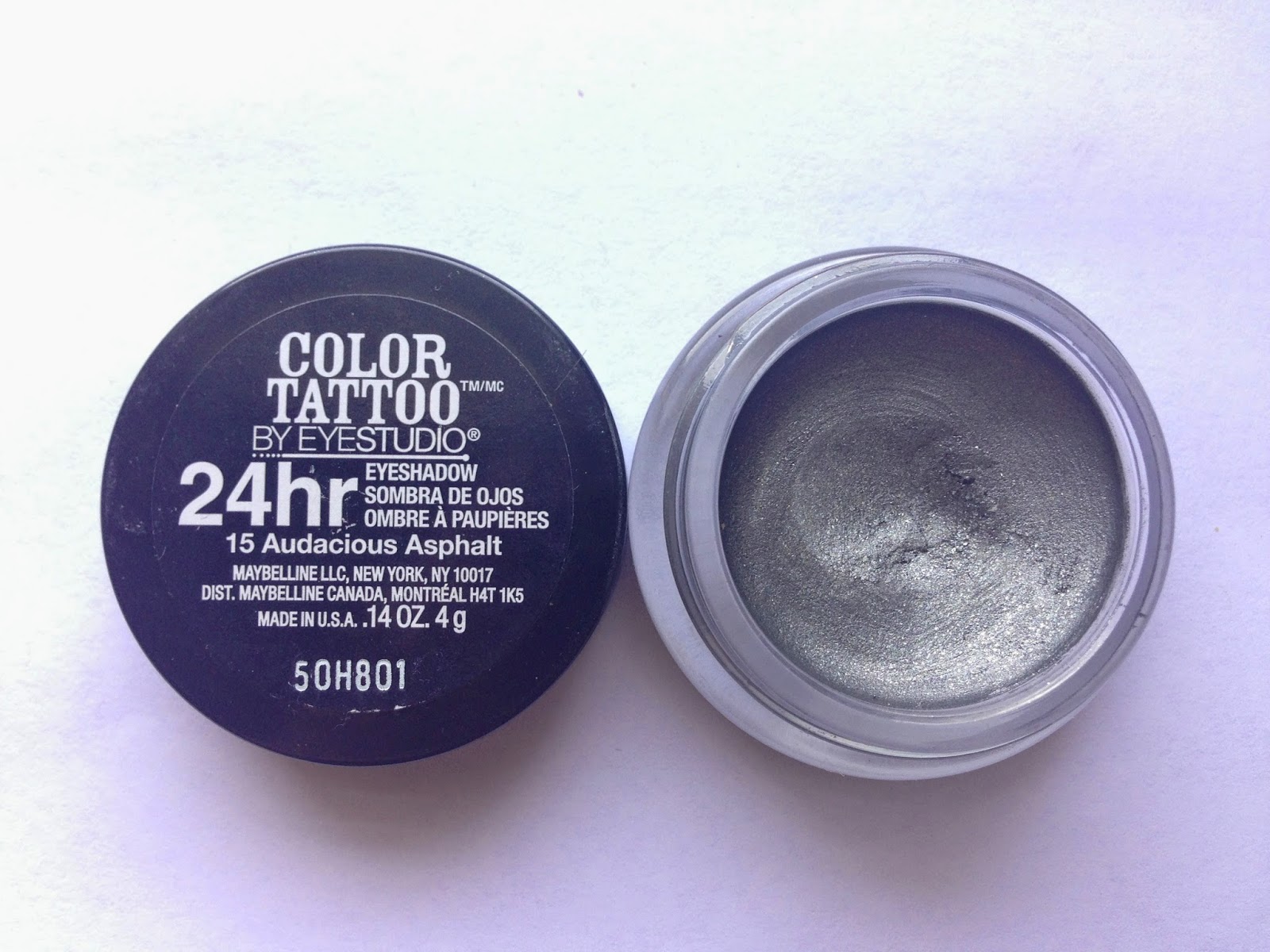 I bought this one in October while putting together my Halloween costume. I was dressing up as Rachel from Blade Runner, and this tutorial had recommended Audacious Asphalt for her '80s-meets-'40s smoky eye. I don't know why I went out and bought it when I had a beautifully formulated Wet n Wild silver eyeshadow that I'd never found an excuse to use, but there you are. Unfortunately, Audacious Asphalt turned out to be dry, stiff, clumpy, and nearly impossible to apply without cursing. But I kept it, for some reason, and it's occasionally come in handy as a sparkly accent. I'm not a cyborg full-time, after all, so I'm rarely in the mood for an eyelid completely coated in silver sparkles.

Here's Audacious Asphalt (left) next to the silver shade from the Wet n Wild Spoiled palette, which also contains a matte fuchsia and a sparkly black. Why did I choose that as my first-ever eyeshadow palette? Why not a nice neutral trio? Once an Edwardian cyborg, etc. 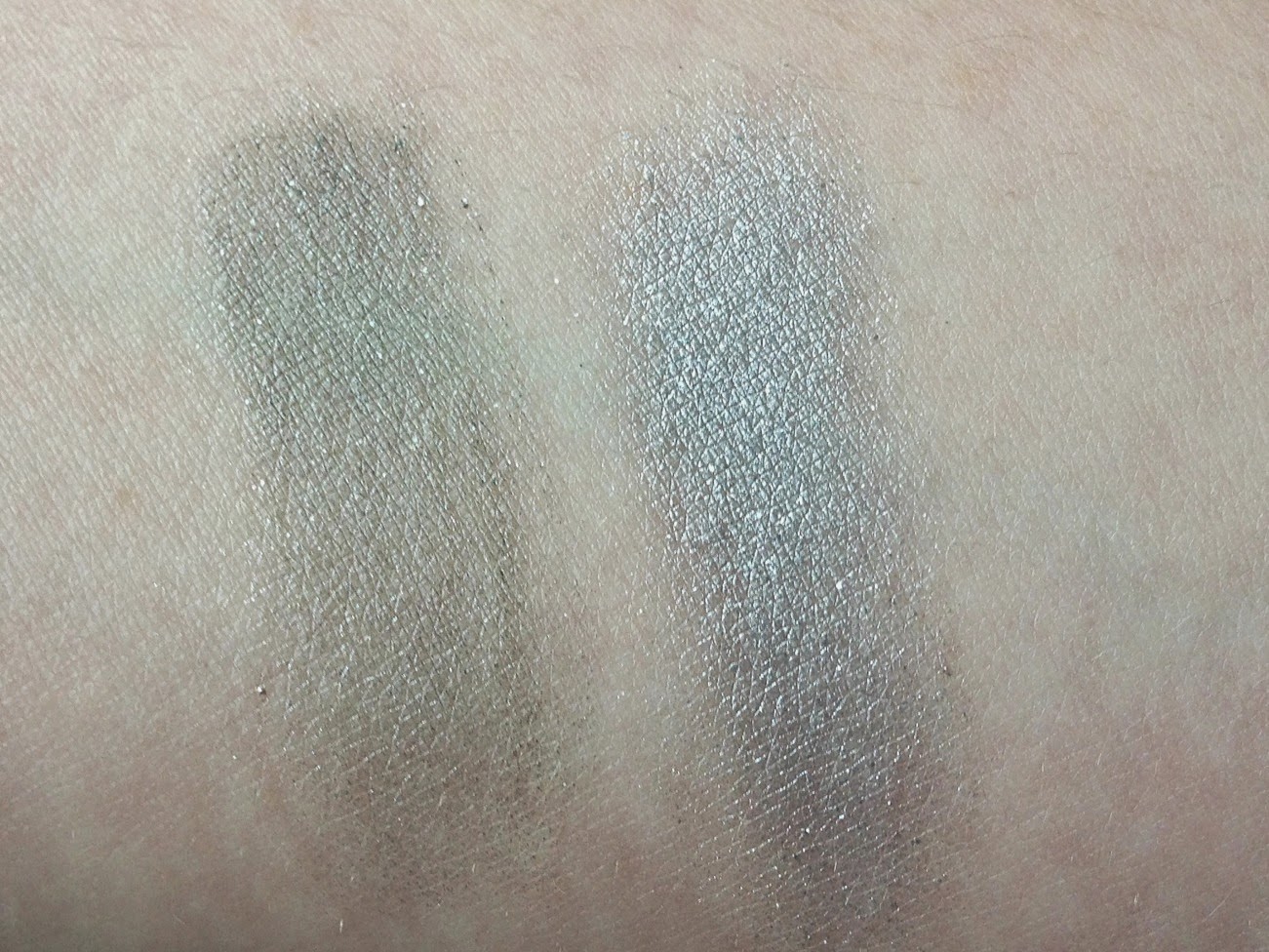 The palette recommends that I use the silver as a browbone shade. Gambit declined, Wet n Wild.

As I mentioned in a recent post, I wore Audacious Asphalt this Independence Day over a base of Tough as Taupe. Closeup for glitter:

Pomegranate Punk is a reddish plum with gold shimmer. 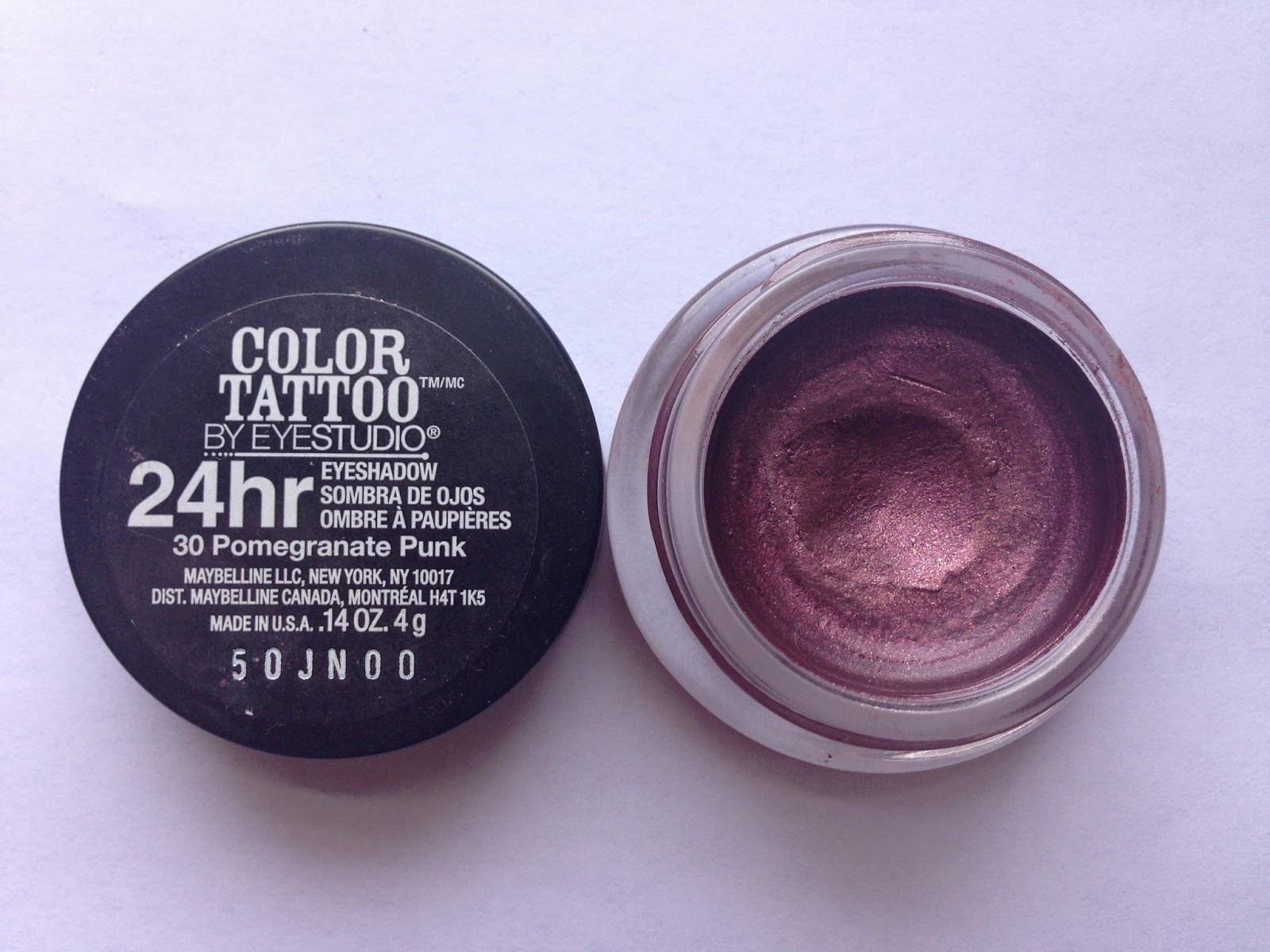 I seem to be drawn repeatedly to red-based purples; I find that they bring out the green in my eyes. Left to right: NYX Jewel, right-hand shade of NARS Habanera duo, and Pomegranate Punk. 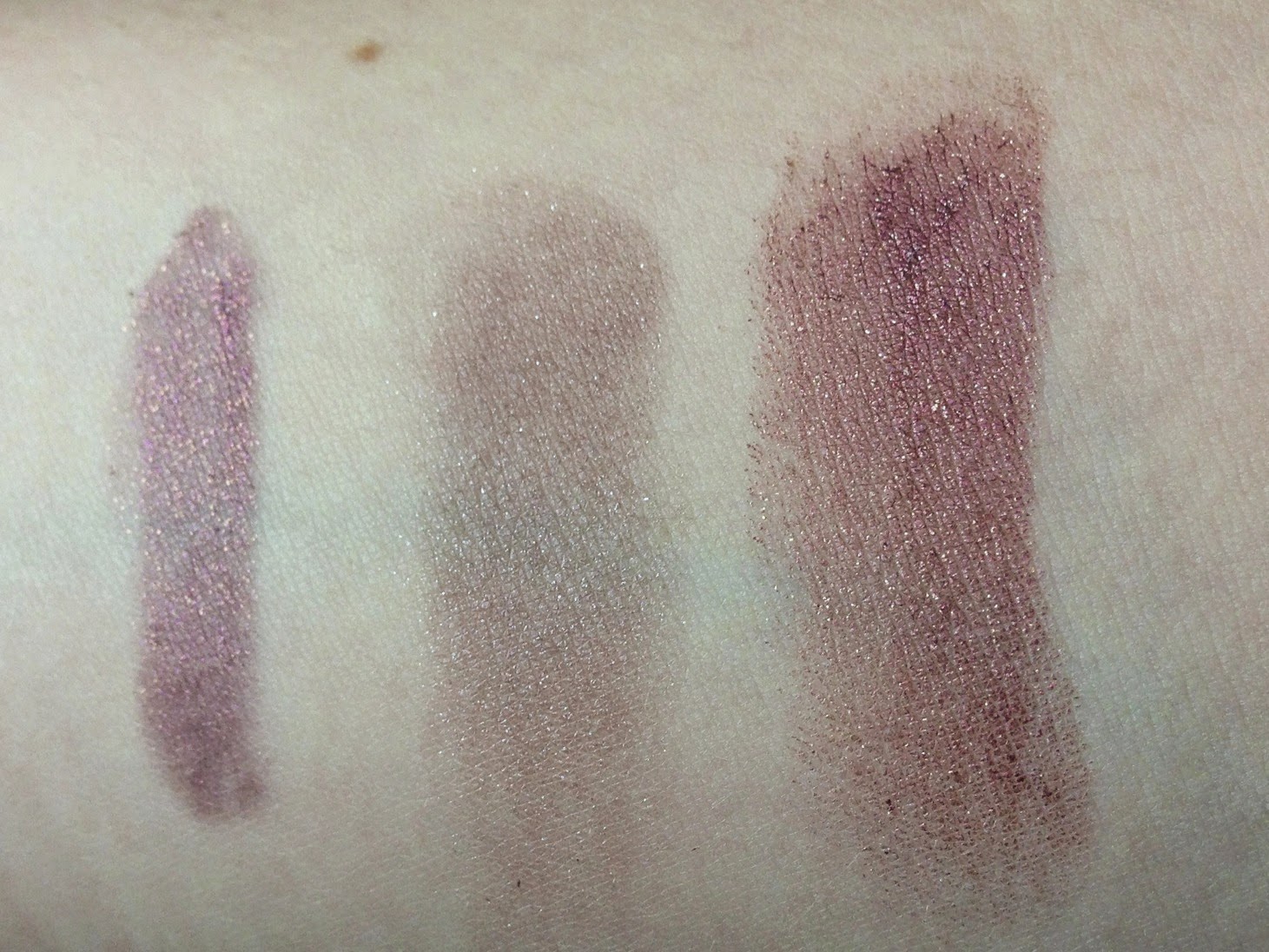 I don't know how to make this color read anything but "fall/winter," so I haven't worn it in several months. Here's a look from January, though. I'm wearing NARS Mata Hari blush and Maybelline Nude Lust lipstick (?), and I think I've used Bad to the Bronze on the inner two-thirds of the lid and Pomegranate Punk on the outer third. 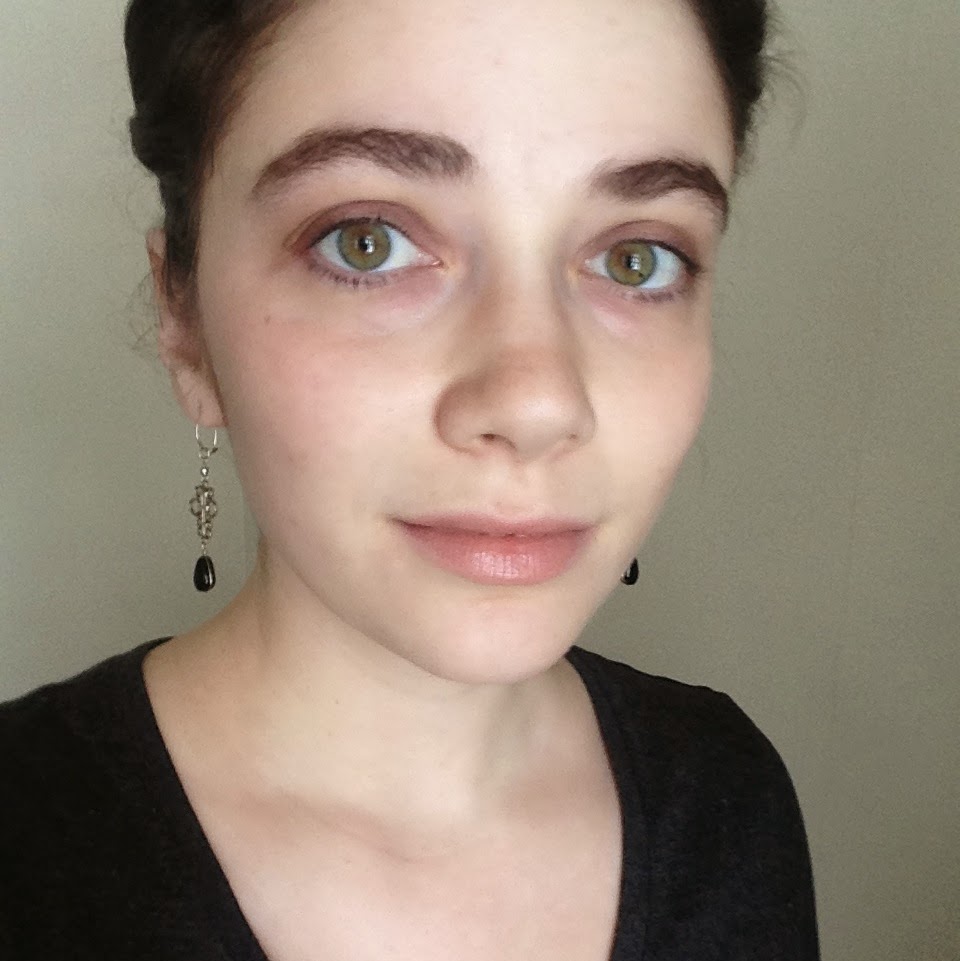 Tough as Taupe is a matte gray-leaning taupe with a delightfully smooth, rich texture. 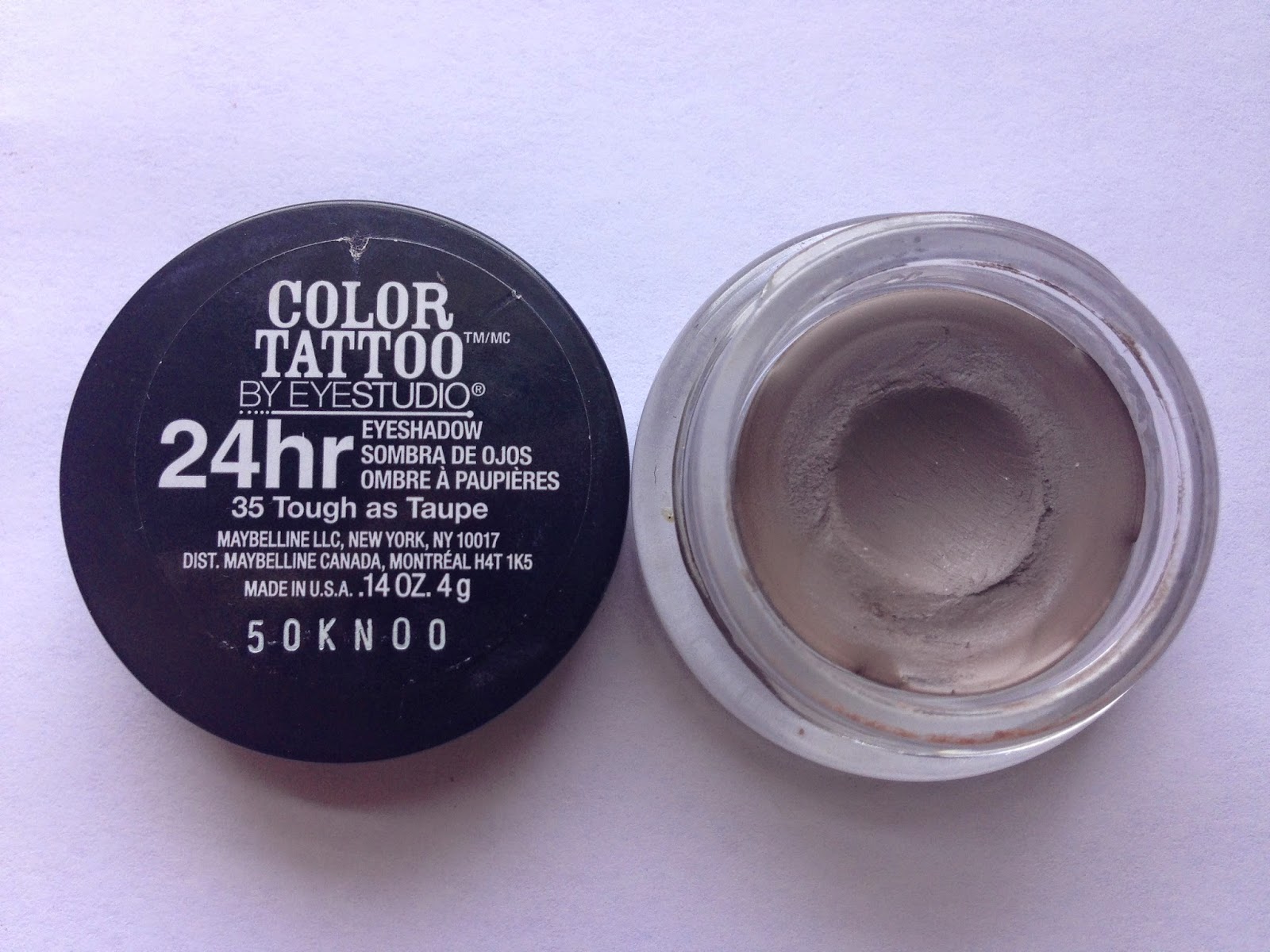 I almost never wear matte neutral eyeshadows on their own, since they tend to emphasize my dark undereye circles, but I love Tough as Taupe as a layering base for sheerer, lighter colors. It also tones down bright colors, making them more wearable. I bought it to use as a base for NARS Lhasa, but it works just as nicely with non-taupes. From left, here's Tough as Taupe on its own, then layered under Lhasa, Kiko Infinity Eyeshadow #251, and Topshop Chameleon Glow in Wax + Wane. 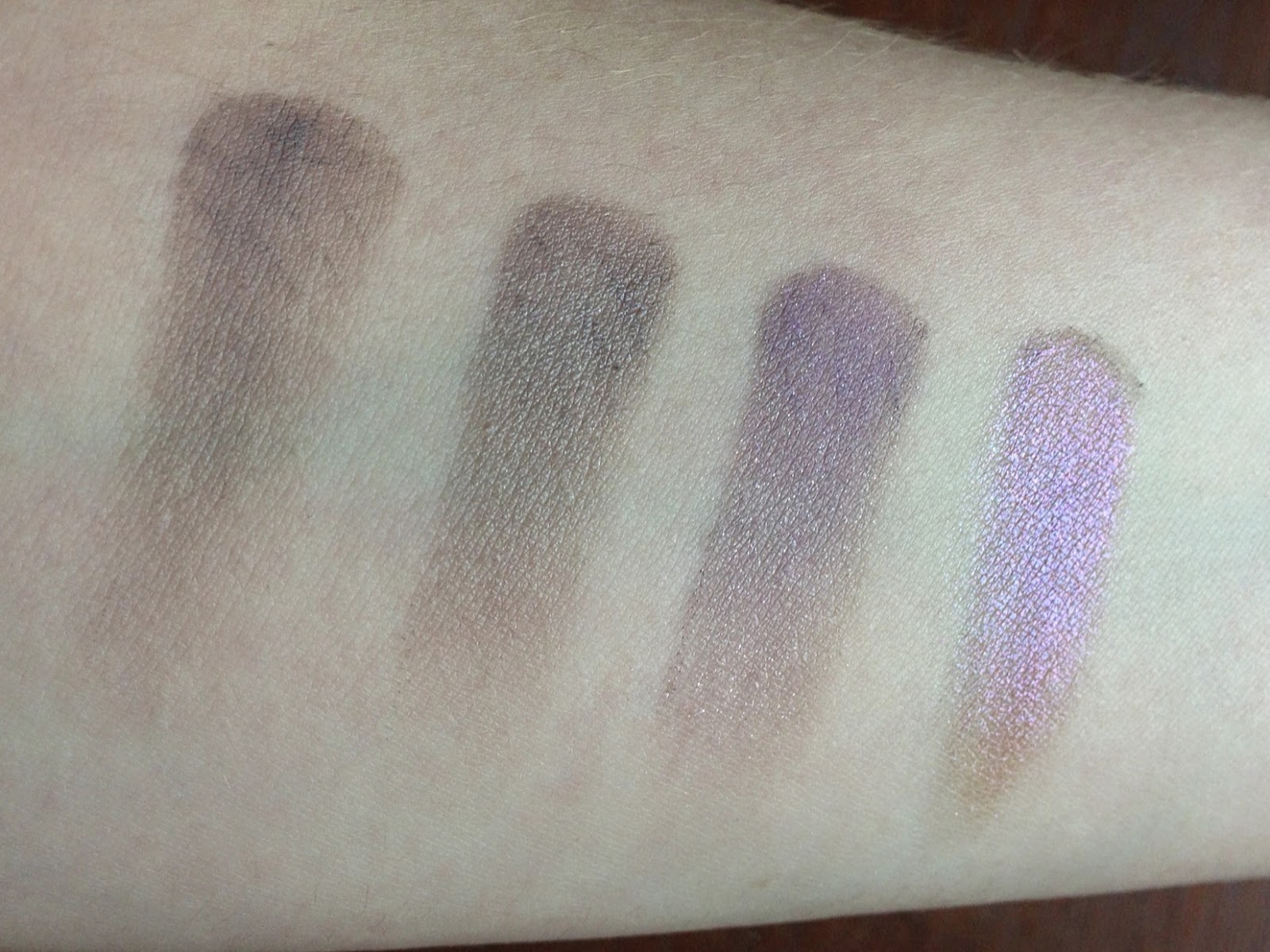 And some comparisons: from left, Tough as Taupe, Lhasa, and theBalm Selfish. I need a brownish taupe to replace the nearly extinct Selfish, and I've been hearing good things about the new Milani Bella eyeshadows, so I might hunt down Bella Taupe before long... 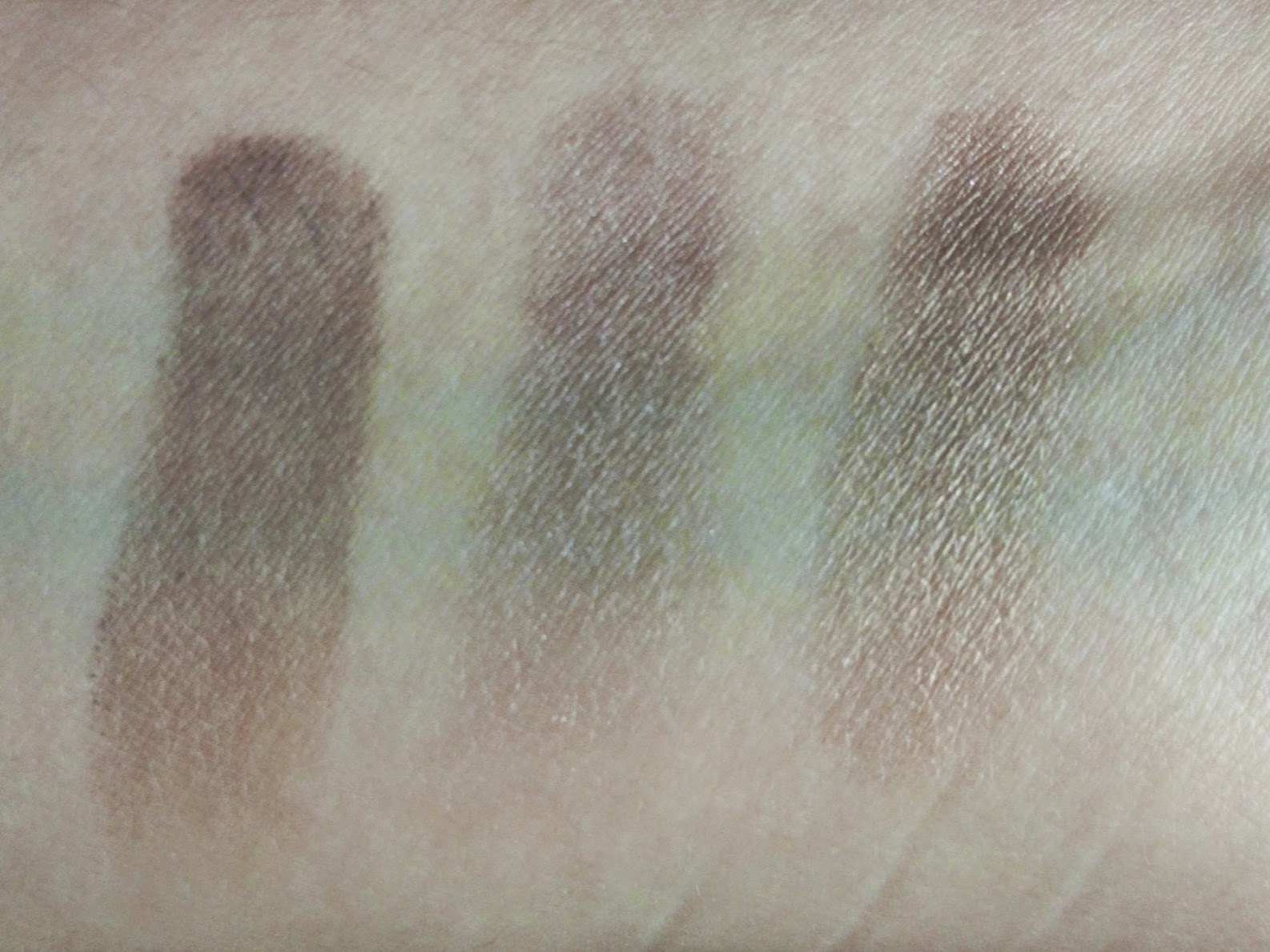 Here I am wearing Tough as Taupe with the mint green from NARS Habanera as a center-lid accent. Lip color is NARS Sheer Lipstick in Dolce Vita, for which I also need a replacement--I'm down to the barest nub, and have been avoiding finishing it for months because, well, $24. For some reason I resent having to repurchase things, even things I really love. 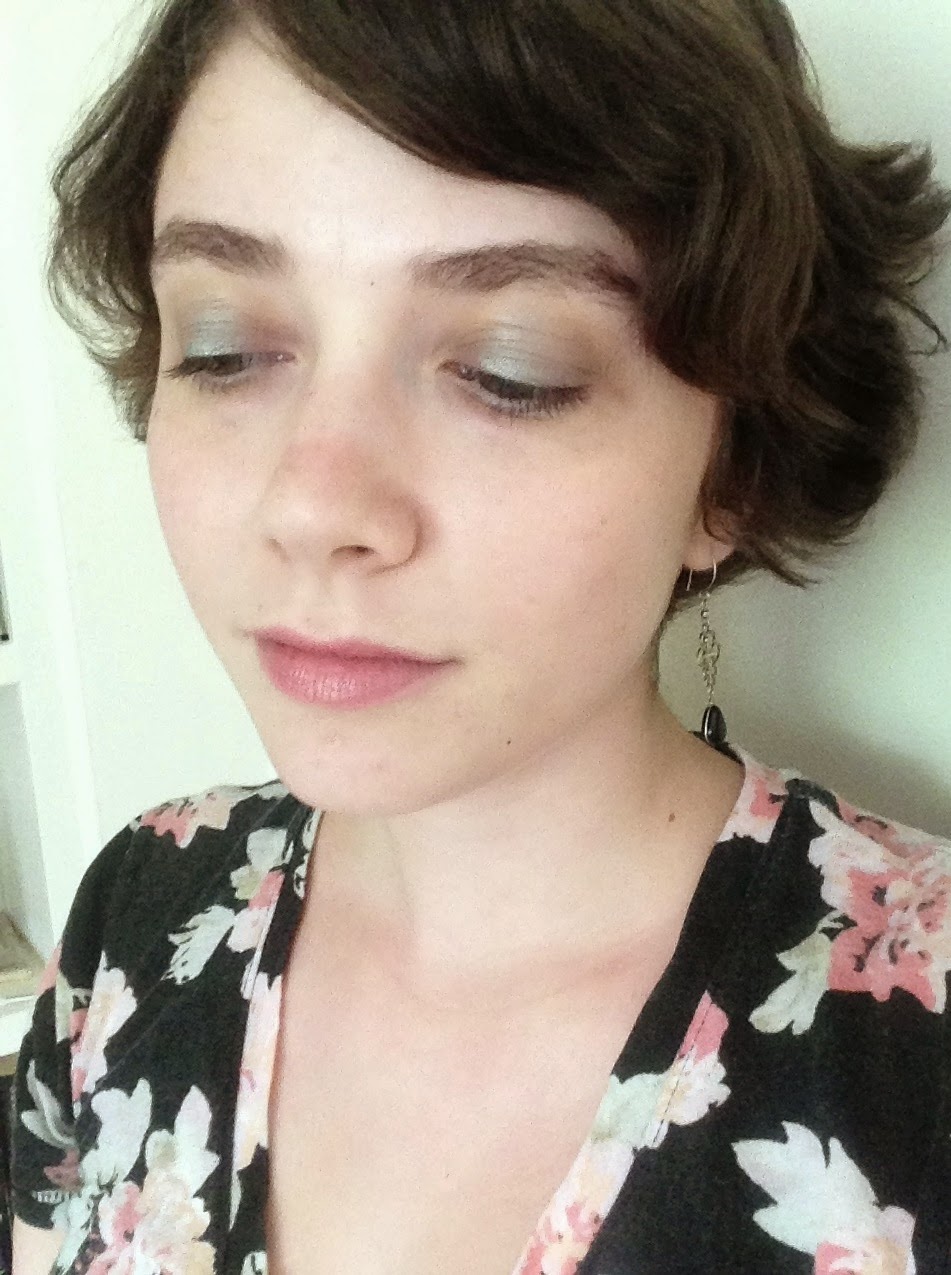 Finally, an update from the desk of gravity-defying bedhead. This image is saved on my computer as "why.jpg": 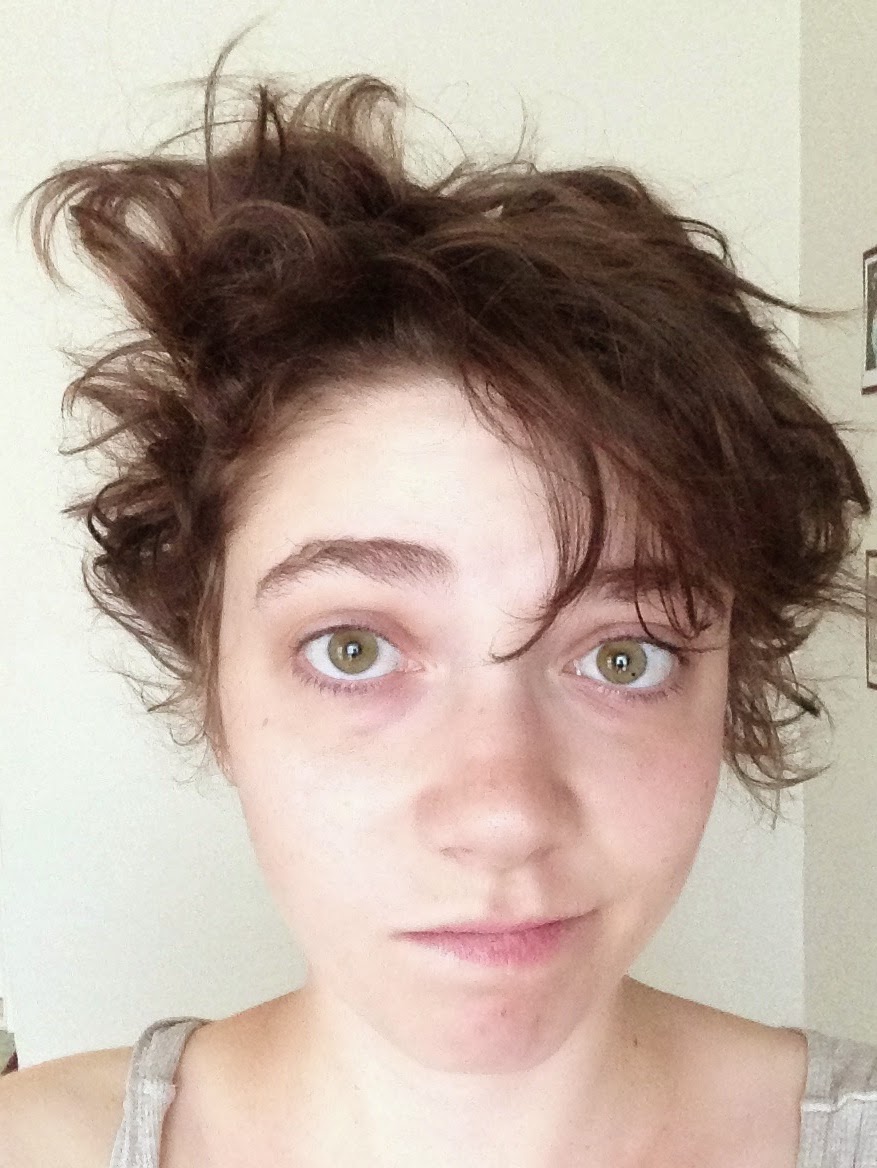 What are your feelings on Color Tattoos, or tattoos in general? Do you have any of either?
Posted by auxiliary beauty at 6:15 PM