Since all but one of the nail polishes I wore in August were new to me, I thought I'd write up a month's worth of mini-reviews!

My first polish of August was Zoya Normani, which I bought at the Birmingham Ulta in July. The darkest shade in Zoya's nude-based Naturel collection, Normani is a brown-gray-purple taupe. It belongs to the same family as OPI You Don't Know Jacques and Chanel Particulière, though it's rosier and less gray than either of those. Normani didn't catch my eye when I was looking at swatches of the Naturel collection online, but the color leaped out at me when I saw it on the shelf. Further proof that I need to limit myself to makeup I can see in person first (of course, I'm lucky enough to live in a country overflowing with Sephoras and Ultas and such). 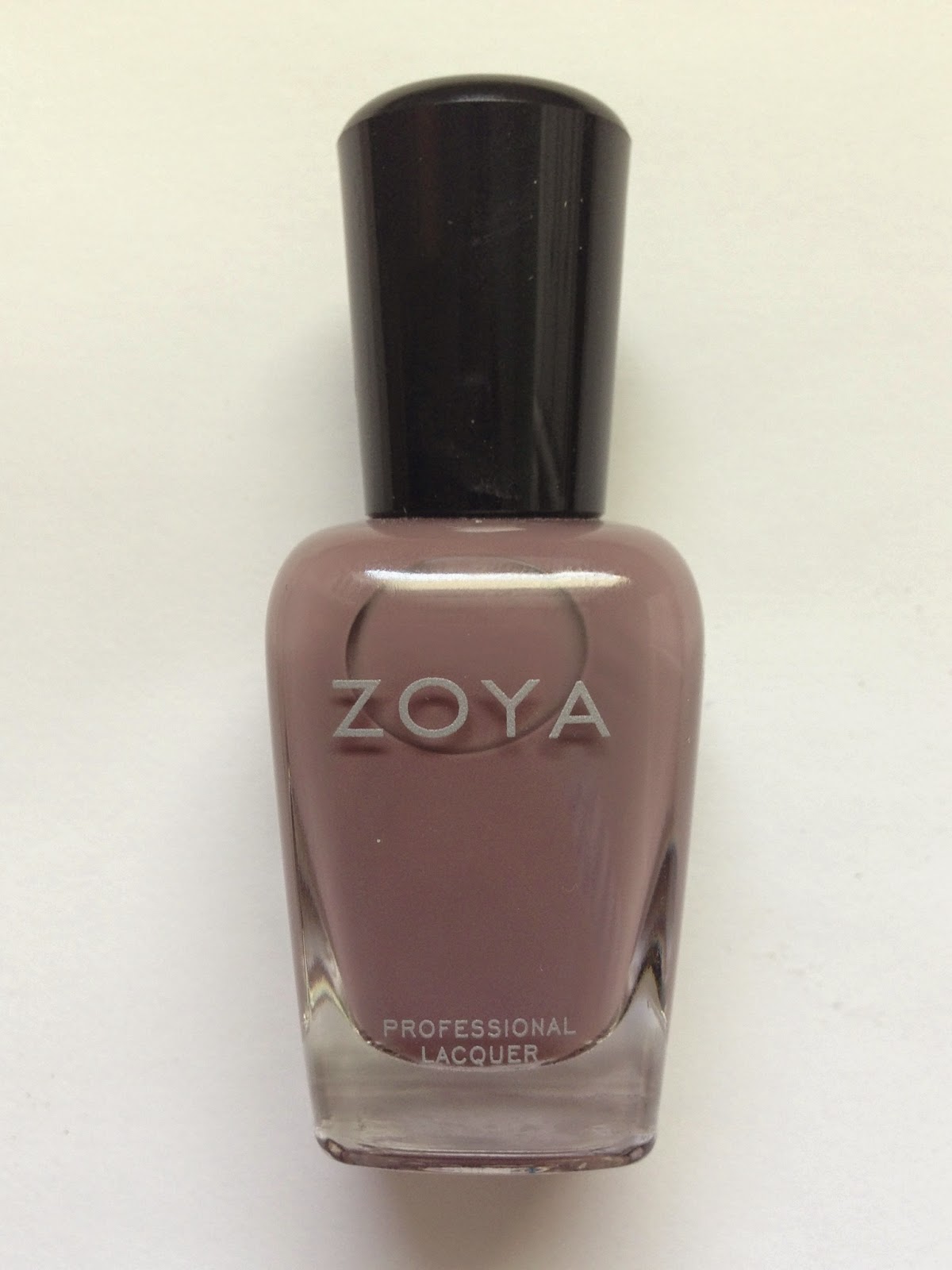 Normani turned out to be a three-coat nail polish. On my nails, it was darker than I'd expected, but I loved it no less for that. It looked clean and modern and elegant, and I have a feeling I'll be reaching for it a lot this fall. Even my dad, the least likely person in the world to notice the cosmetics I'm wearing, complimented me on my "brown nail polish." This stuff is good. 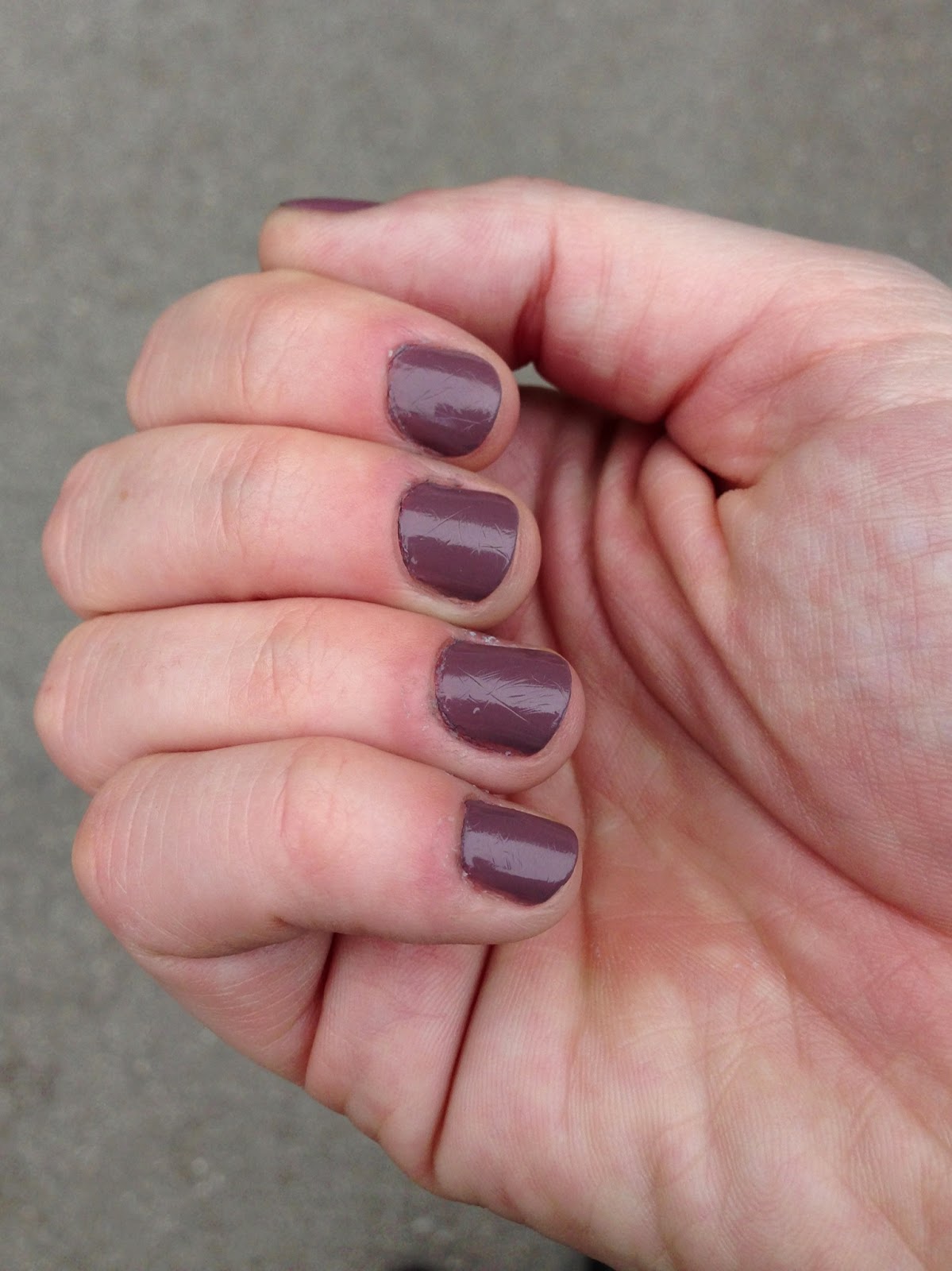 Normani showed tipwear after two or three days, which is average for me; I don't understand how some people get their polish to last for a week. I try to do everything right: applying basecoat and topcoat, waiting for each layer to dry completely before adding the next, blah blah blah. I just have weak nails, and my habit of peeling off my polish once it's chipped certainly doesn't help. It's a terrible vicious cycle: because my nails are so weak, my polish chips; because I can't stand the look of chipped polish, I peel it all off before I can get to a bottle of nail-polish remover; because I peel it all off, my nails get weaker. I was so proud of myself last year for overcoming (more or less) my lifelong nail-biting habit, but because I didn't overcome the anxiety that produced the biting, I just replaced one nervous hand-based habit with another. Sigh.

Next in my retrospective is Butter London Wallis, the official nail polish of Slytherin House. 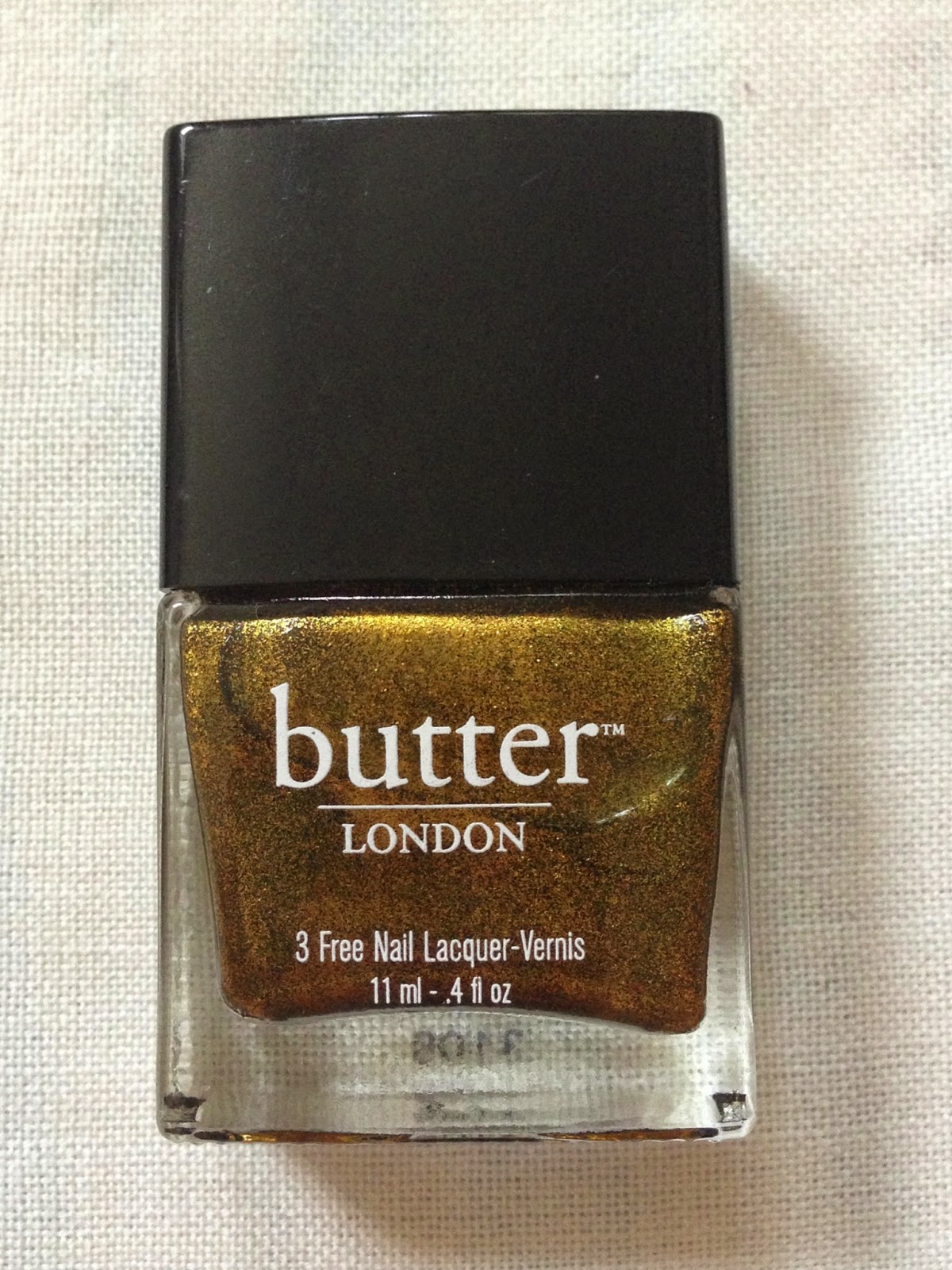 Wallis looms large in my personal makeup mythology. I'd been admiring it for two years before I finally bought it. When you hem and haw over a product for that long, you half-convince yourself that it's as mythical as the Golden Fleece and you, small pathetic you, couldn't possibly obtain it. Plus, I wasn't certain that I'd wear it, since I don't usually favor nail polishes with such pronounced shimmer. But when I saw it on the shelf, in all its olive-gold glory, I decided that enough was enough.

Wallis is a dark olive green with abundant bronze-gold shimmer--so abundant, in fact, that it gives an almost foiled effect on the nails. It leans more green in shade and more gold in direct light. Like most of the shimmer polishes I've tried, Wallis requires three coats for full opacity; but once it's on, it stays and stays. I think it was about four days before it developed noticeable tipwear, which is almost unheard-of for me.

I have nothing bad to say about this polish, except that it's named after a controversial public figure who probably held Nazi sympathies and definitely associated with the notorious British fascists Oswald and Diana Mosley. Butter London's apparent ignorance of British history aside, Wallis is dazzling--the perfect summer-to-fall transition color.

The absurdly named Essie Bikini So Teeny was a hand-me-down from my mom, who bought it for herself but turned out not to like it. It's a pale cornflower blue with silver microshimmer. 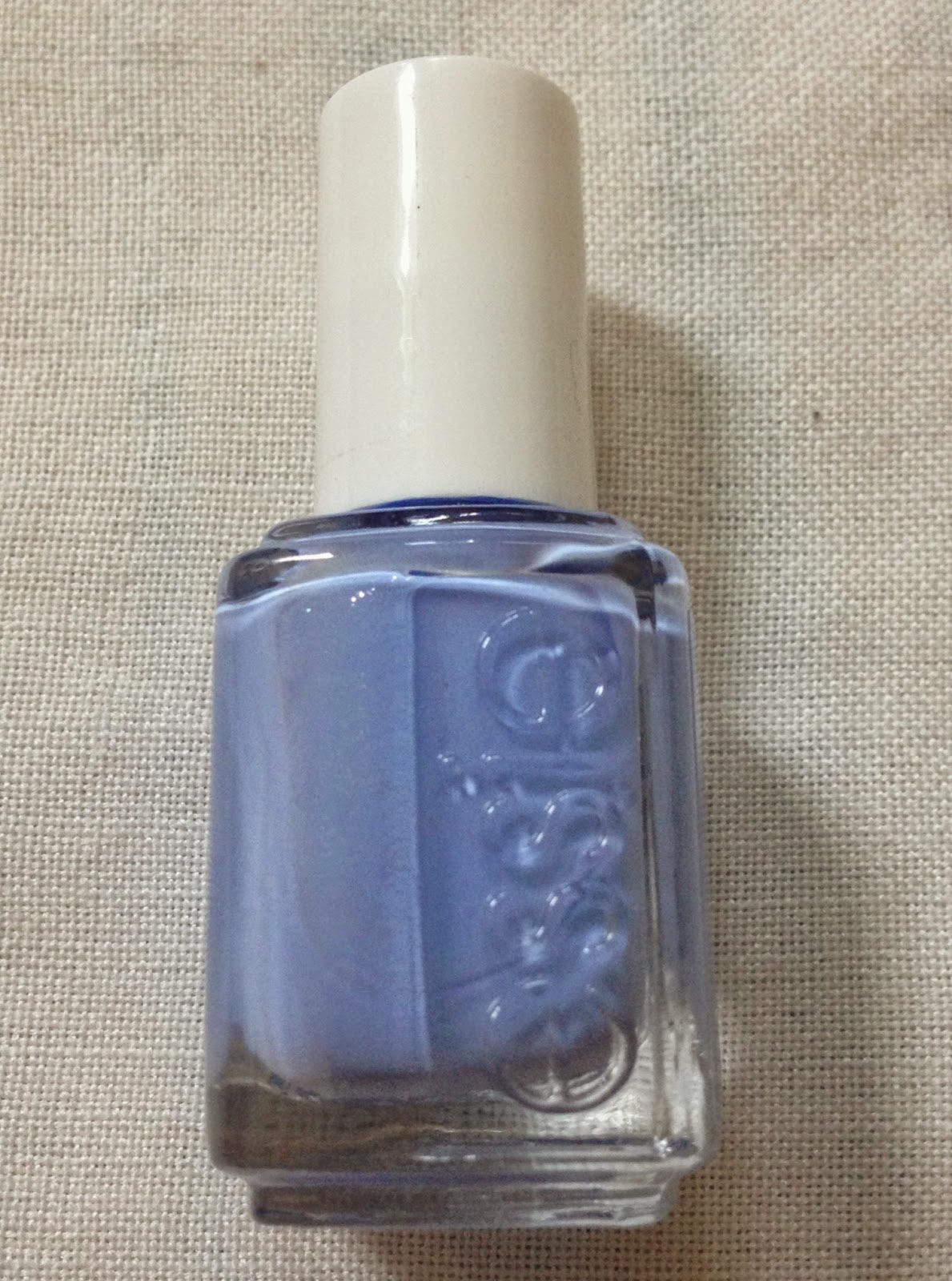 Alas, everything that's traditionally wrong with Essie polish is wrong with Bikini So Teeny. Formula that's still slightly streaky after three coats? Check. Shimmer that looks beautiful in the bottle but disappears on the nails? Check. Short wear time? Check. I don't know why anyone buys pastels from Essie anymore. 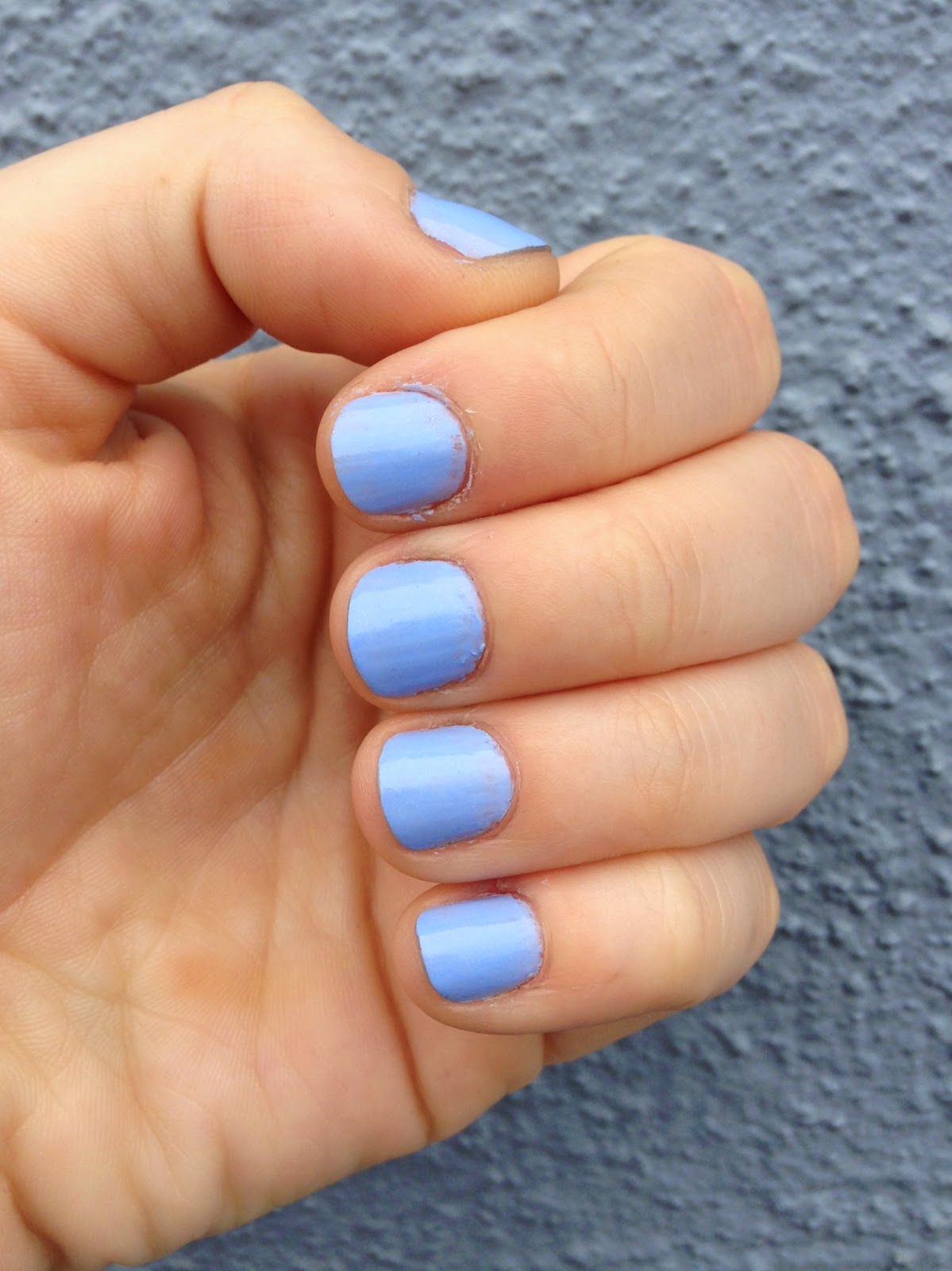 This is three coats, and you can see that it's still translucent in parts. It's a pretty color, but I didn't love it on myself--I'm not a fan of most stark pastels. It lasted for about two days before it began chipping.

My boyfriend was coming to San Francisco for a few days in mid-August, and since we were going to be exploring the city all day, I wanted a polish that wouldn't need constant touch-ups. I should have gone with Wallis again, but I was attracted by Essie No More Film, another gift from my mom. No More Film is a deep blue-leaning indigo creme from the Resort 2012 collection. I've seen it described as a "blurple," but can we all agree that "blurple" needs to vanish from the beauty-blogging lexicon? It sounds like a portmanteau of "burp" and "blurt" and "gurgle," and don't we already have the word "indigo" to signify "blue/purple"? 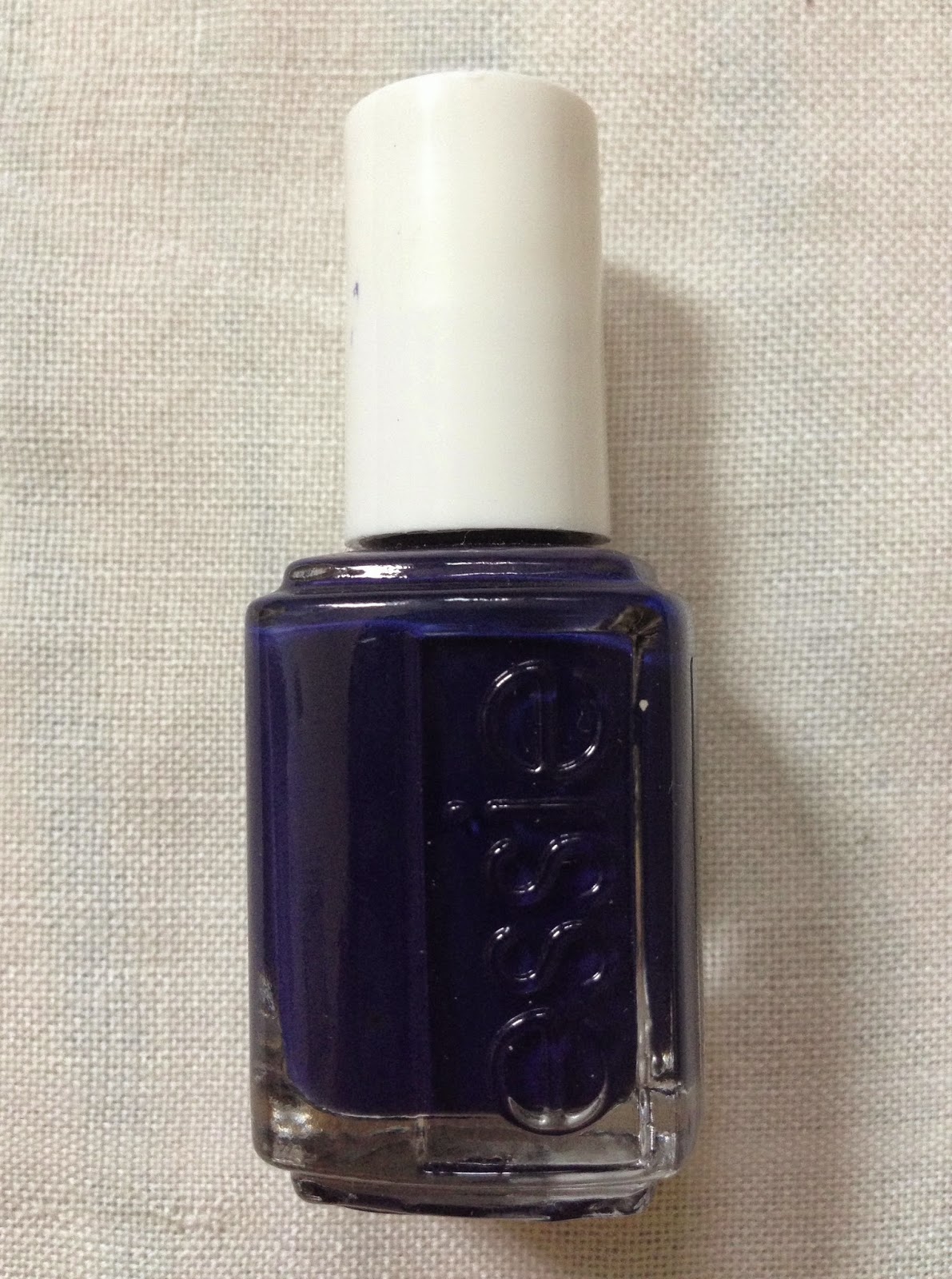 Seriously, to hell with this nail polish. It's a beautiful color with a smooth application and two-coat opacity, but it chipped WITHIN 24 HOURS. I was counting on you, No More Film! I was counting on you, and you betrayed me! It had chipped so badly after two days that I had to remove it entirely. I kept the bottle, because I needed a replacement for my dried-up Butter London Royal Navy, but it was only grudgingly that I gave No More Film a space on my nail-polish shelf. If it didn't promise to look so good under every glitter topcoat I own, I wouldn't be so lenient. Hmph.

Before I went to LA, I decided that I needed one more fling with a bright summer shade, so I pulled out Chanel Tapage. I've reviewed it here; it's a warm pink-red that applies like a dream (two coats, self-leveling, quick-drying) but chips like a nightmare. Not as badly as No More Film, but I do expect tipwear in one to two days. The bottle looks the worse for wear after its international and transcontinental travels these last few months... 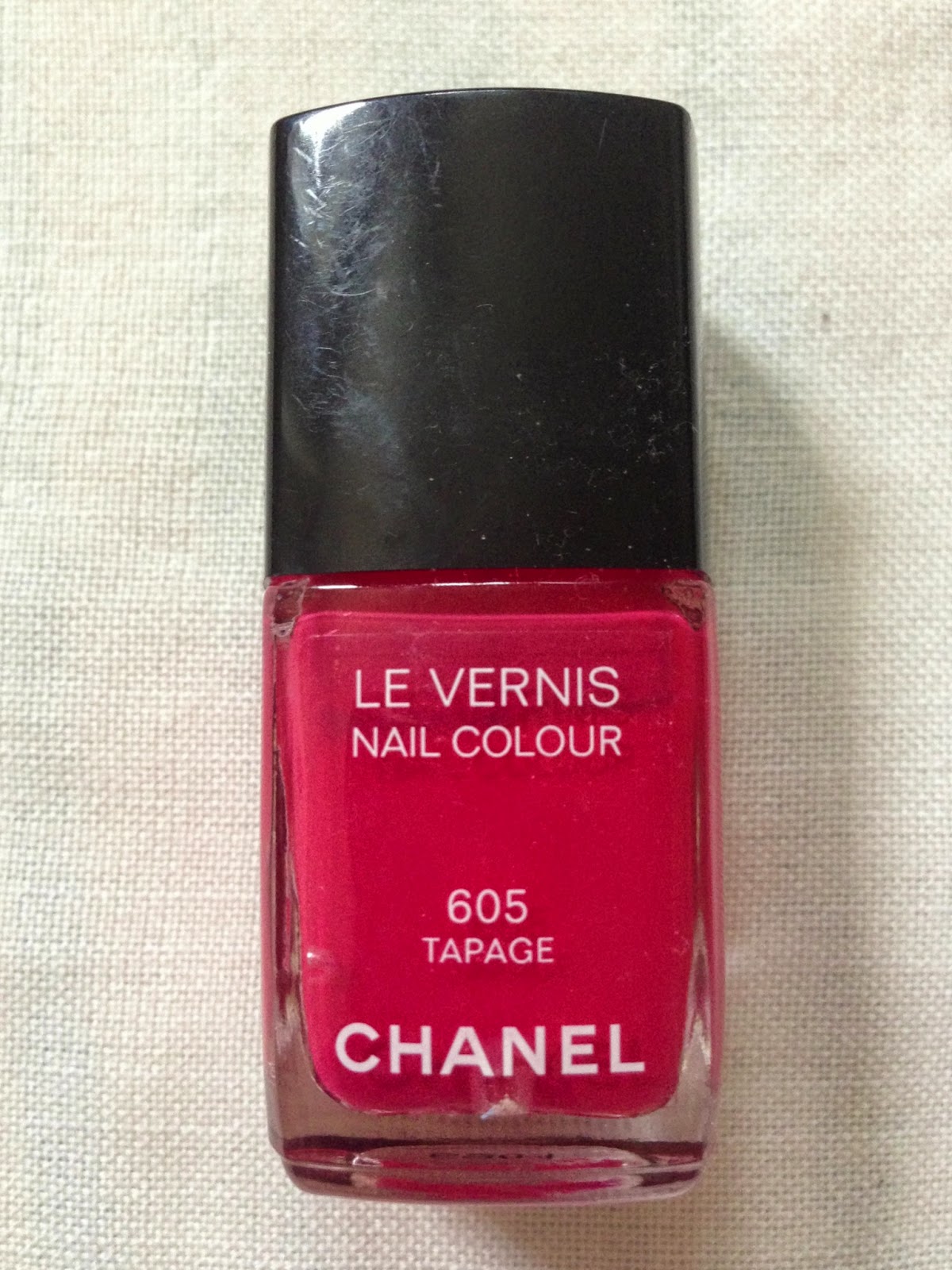 Tapage looks slightly warmer and more corally on the nails, but it's still as cool as coral gets before crossing the line into fuchsia. 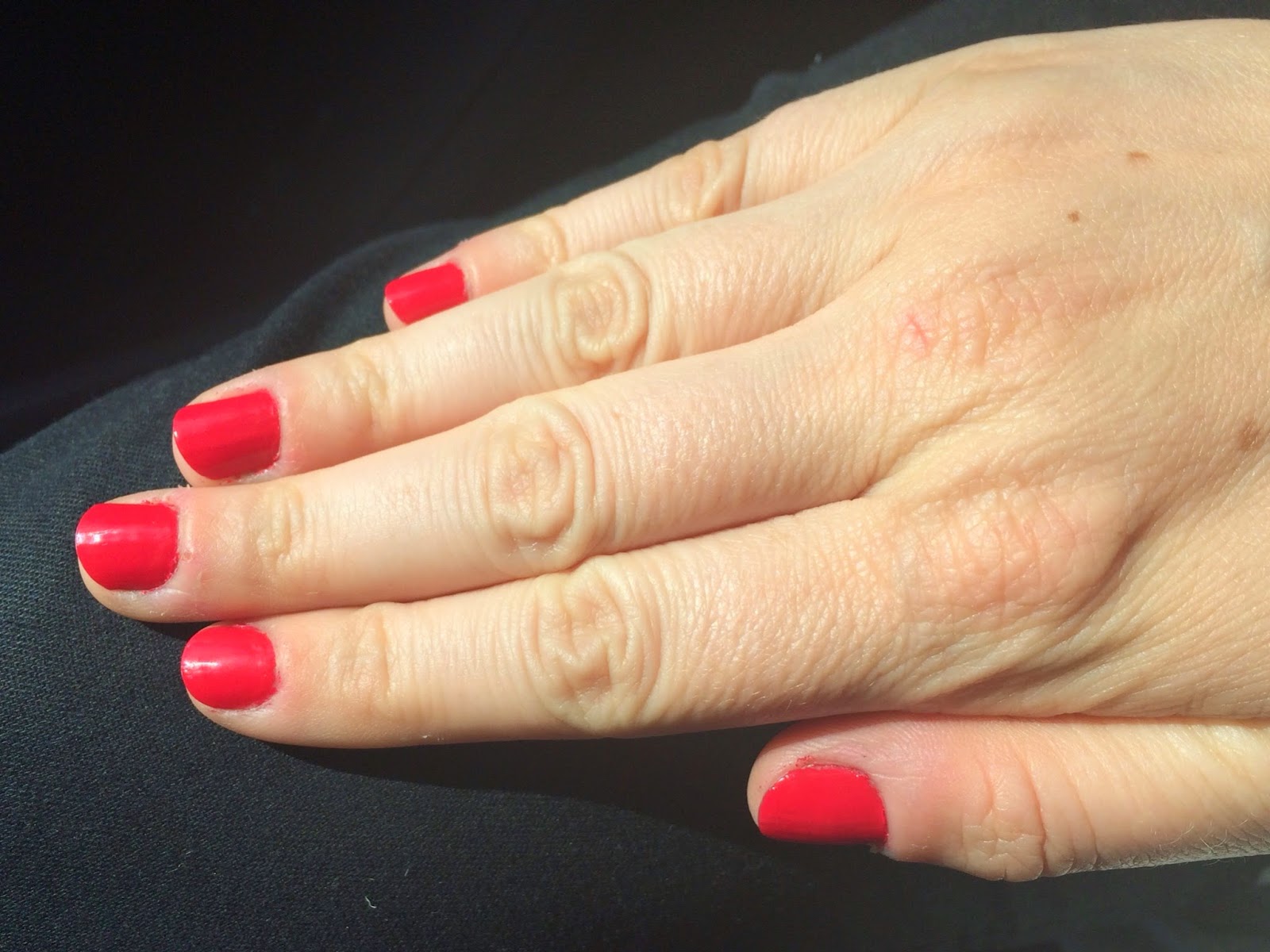 Finally, the polish I'm wearing as I type this: Zoya Zara. Remember the order I made from Zoya two months ago, when they were having their Independence Day 3-for-$12 sale? It took them forever to send out the polishes (three weeks, and I was told on the phone that it might even be five weeks), which meant that the package arrived the day after I left town in late July. Not knowing where it had been left, I accepted that it might not be there when I returned, but it turned out to be tucked safely into my mailbox, along with four issues of the New Yorker and a belated tax-return check from the government. I can't think of better mailbox contents to greet me on my return home.

Of the three Zoyas I had ordered, I was most excited about Zara, a midtone lavender with gold pearl. 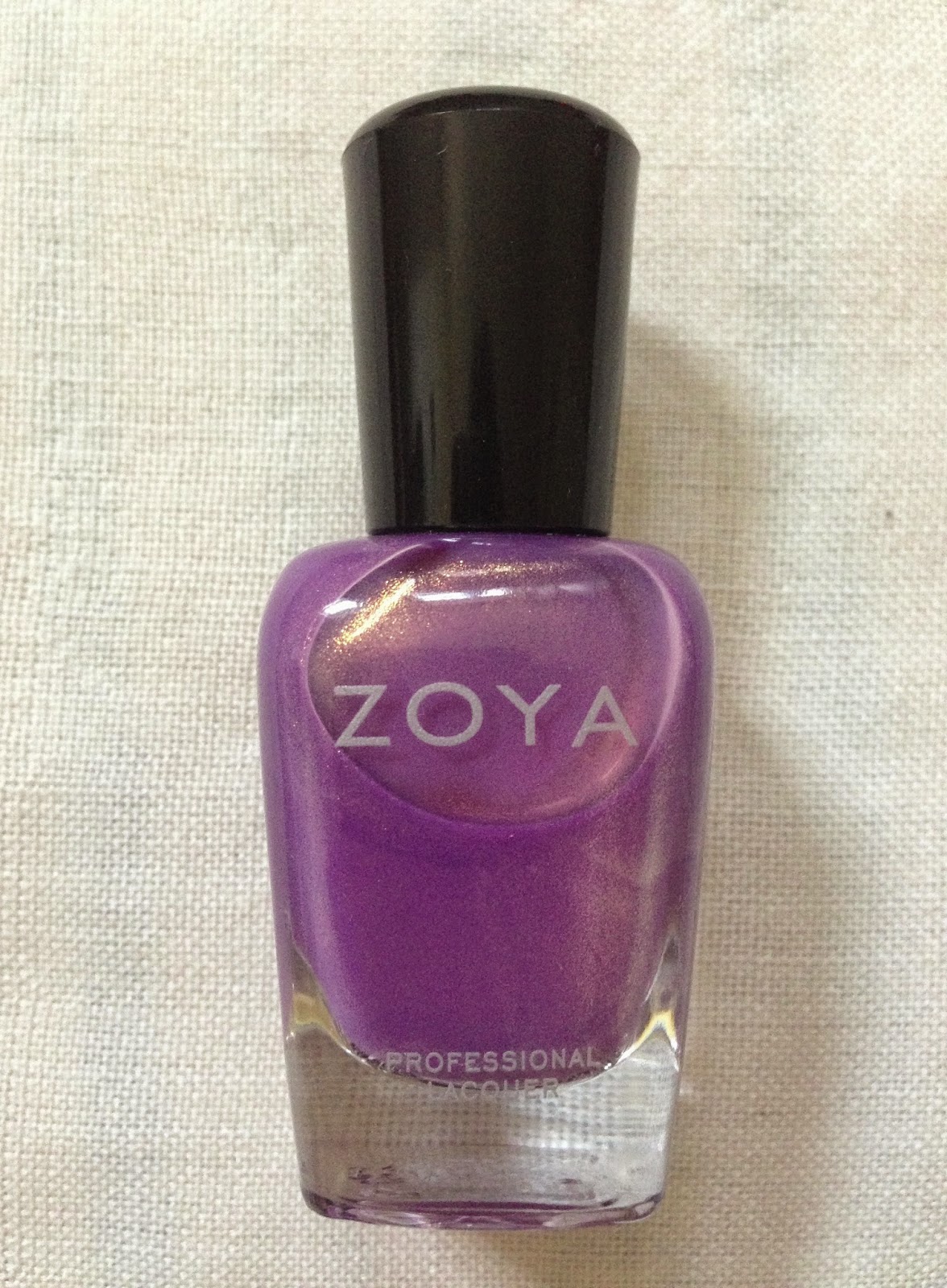 Zara is so beautiful, you guys. It's like fairy polish. It also looks surprisingly autumnal, despite its pinky-purple base. 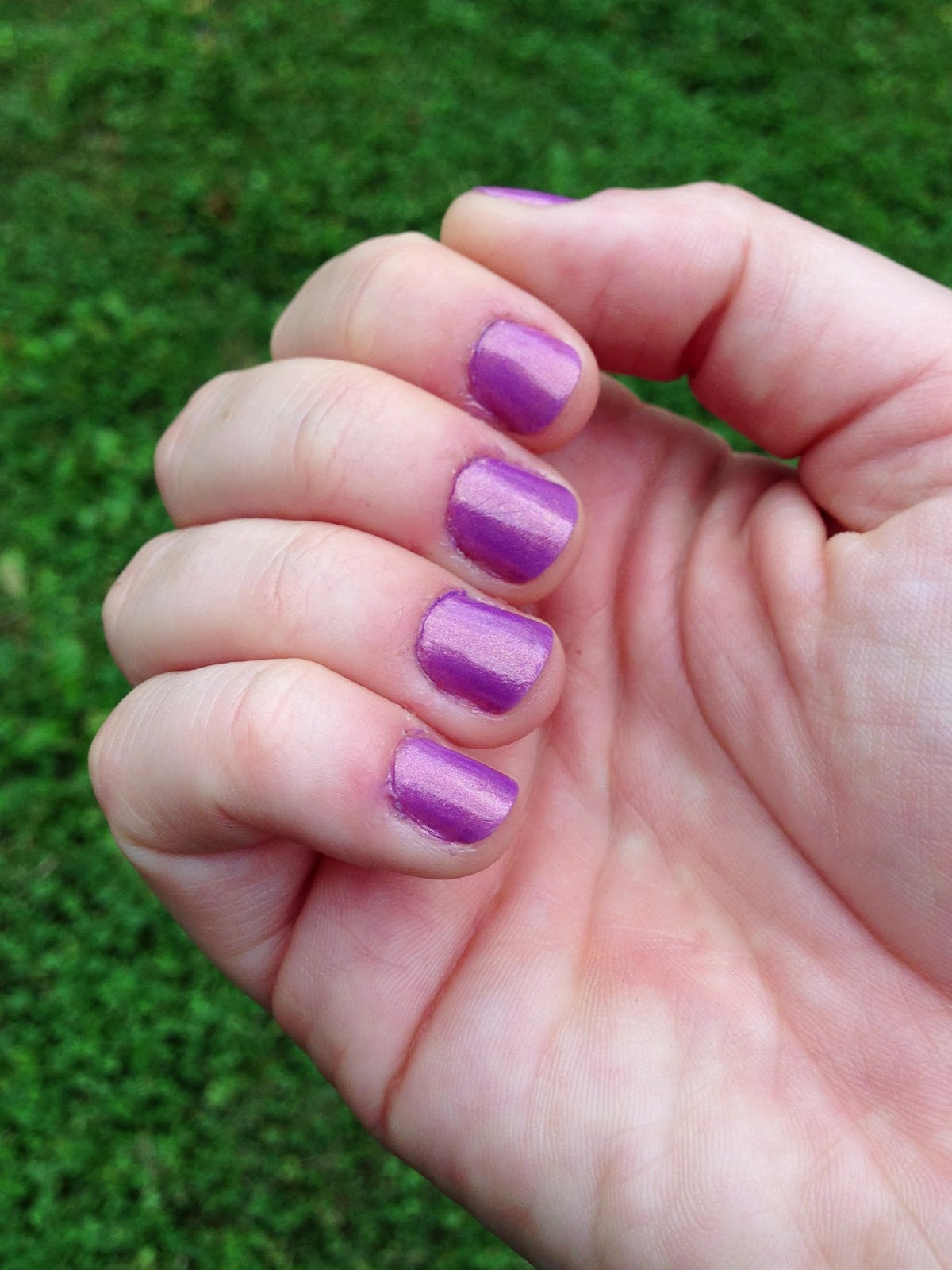 Like fairies themselves, Zara is hard to photograph, its gold overlay slipping in and out of focus.The camera likes to meld the purple and gold layers together, but they're more discrete (thus more magical) in person. This was the most color-accurate photo I could manage: 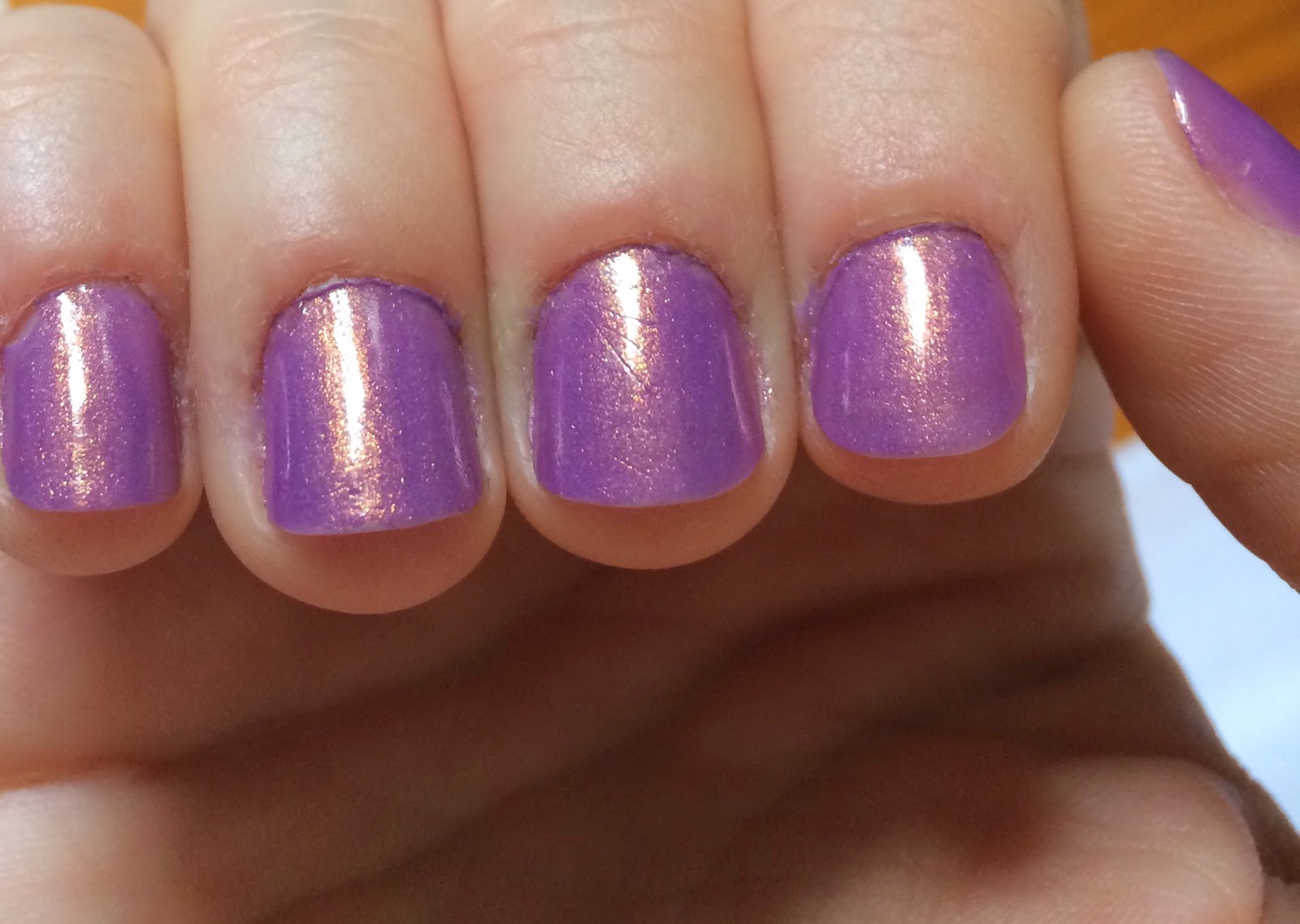 As I expected it would be, Zara is a three-coater; I've been wearing it for just over a day, so I can't speak to wear time yet, but it's doing fine so far. I can't wait to try my other Zoya picks: Neve, a metallic navy, and Yara, a gold-flecked olive (very different from Wallis, I promise).

And that was my August in nail polish. What were your favorites this month?
Posted by auxiliary beauty at 12:22 PM