Goldilocks and the Three Lip Brushes

If you've watched as many geisha documentaries as I have (she said, too casually), you'll be familiar with the clichéd close-up shot of a geisha or maiko painting her white-powdered lips with a brush dipped in rouge. The inevitability of this shot, in both Japanese and foreign documentaries, makes me roll my eyes every time it comes up; there's something fetishistic and exoticizing about it, especially when the wielder of the brush is a sixteen-year-old maiko. But the allure of the ritual itself is undeniable. Applying lipstick with a bullet can be sexy, but it's more often matter-of-fact: swipe it on and go. Applying lipstick with a brush is never anything but artistic. It forces you to slow down, to think critically about shape and precision.

Until recently, though, I'd never felt the need to own a lip brush. The good old bullet, it seemed to me, was a perfectly effective technology for transferring color to my lips. And if a bullet failed to deliver a crisp line and even pigmentation, then I certainly wasn't going to buy extra tools to make an inferior lipstick work. Frankly, I pride myself a little too much on my resistance to outlandish advertising claims. Like many academic types, I like to think of myself as a natural skeptic, but my smug pride is born of insecurity. My makeup obsession has made me realize how vulnerable to marketing I really am, and I'm terrified of becoming the sort of person who believes that Marc Jacobs' Twinkle Pop Eye Stick contains "an infusion of Alpine Snow Water [that] adds a special cooling effect to refresh tired eyes." So I sometimes go to the other extreme and take my skepticism too far, refusing to entertain the possibility that any extra thingum or widget will make my beauty life easier.

Then NYX Matte Lipstick in Alabama entered my life. Alabama was exactly the deep matte interbellum brown-red I'd been pursuing forever (or for two months, which is the same thing in beauty-geek world). It was also trickier to apply than any other lipstick I'd encountered. Alabama is a true flat matte, and because the color is so bold, so rich, and so difficult to remove once applied, there's little room for error. I could have given up on Alabama; after all, I had a Rimmel liquid lipstick in a similar shade. But I couldn't let that moody brick-red go. So I did the previously unthinkable: I decided to buy a lip brush. And I soon discovered that lip brushes are bizarrely hard to find.

First I searched Walgreens and CVS, but came away empty-handed. Then I went to Target, assuming that e.l.f. or Sonia Kashuk must make a cheap lip brush. Nothing. I'd once read that a small angled eyeliner brush could work for the lips, so I picked up a $3 e.l.f. eyeliner brush and took my business to Sephora. There I found a retractable lip brush for $10. Armed with both of these, I began to experiment.

The Sephora Collection Retractable Lip Brush #60 was good, but not good enough. Since I returned it so soon after buying it, I never managed to take a picture, but here's a low-quality image from Sephora's website. (I tried drawing it from memory instead, but gave up after three tries. I don't want to lose all my dignity on the Internet.) 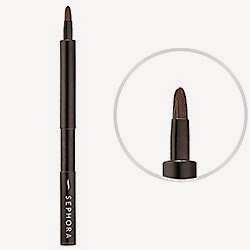 This image depicts the brush when expanded; to retract the brush head, you push the two end parts together, and the bristles slide back inside the handle. This sounds like a marvelous innovation, but it actually created more problems than it solved. The bristles had a pesky habit of retracting while I was using the brush. Even when expanded fully, the handle was shorter than I'd have liked, so I didn't get enough leverage while painting my lips. The bristles were also too short, which meant that the rim of the handle kept bumping into my mouth. The Sephora image depicts a thinner black part between the bristles and the main body of the handle, but I don't remember that part at all; the bristles just stuck out from the larger tube. Maybe I got a defective item? In any case, my brush went back to Sephora, but not before proving to me that a lip brush was a worthwhile acquisition. I loved painting layer after layer of Alabama on my mouth, watching it deepen from a berry stain to an opaque dark red.

Next I tried the e.l.f. Studio Small Angled Brush from Target. I appreciate that e.l.f. is cruelty-free and uses synthetic hair for all its brushes. 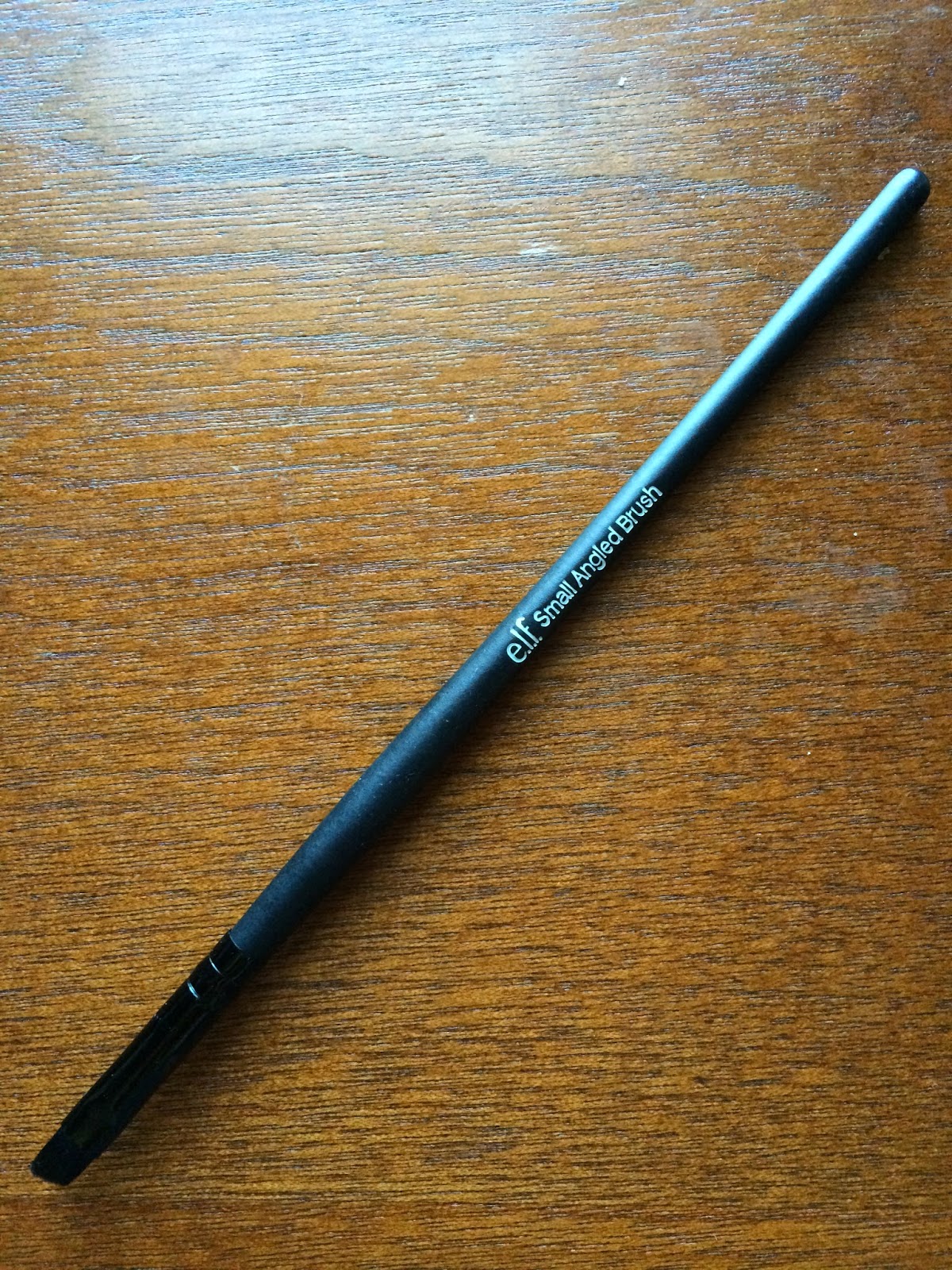 (Brushes are hard to photograph, it turns out.)

The handle of this brush, at just over 6", was longer than the handle of the Sephora #60, so I had greater control over its movement. Unfortunately, the squared-off, sharply angled brush head was hopeless at applying color to my lips; I have no idea why anyone would recommend an eyeliner brush as a substitute lip brush. I kept it, though, and have been loving it for applying eyeshadow to my upper and lower lashlines. The head is thin and stiff enough to cover that elusive space between lashes and mobile lid. God, is there any way to write about makeup brushes without producing what sounds like awkward Literotica fodder?

Finally, I went to another Sephora 3,000 miles away from the first one (I promise that wasn't the reason I made the trip). The second Sephora, in Union Square in San Francisco, had a much larger selection of brushes. I came away with the Sephora Collection Pro Lip Brush #81, which turned out to work beautifully. 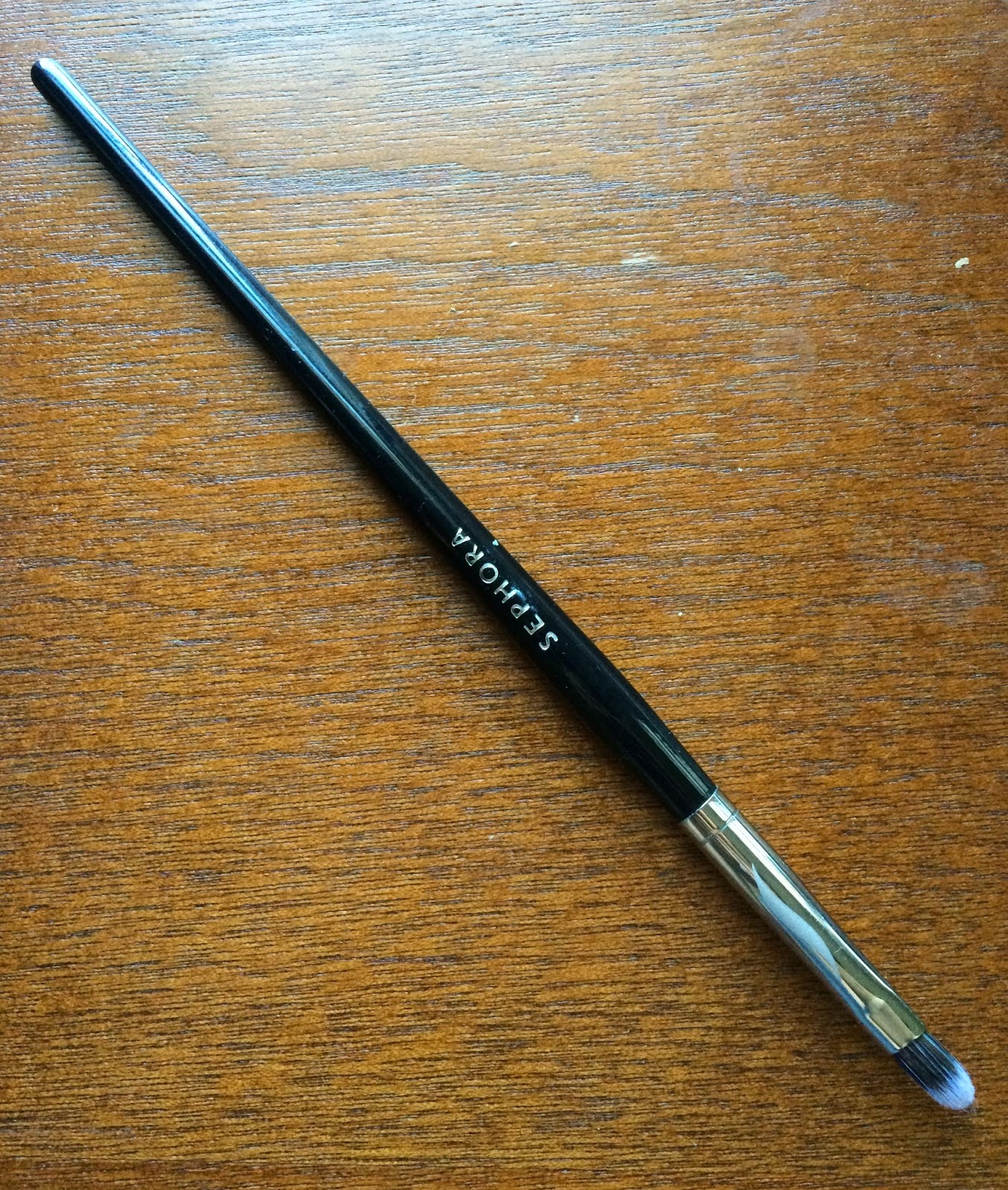 At 6.5", the handle is the longest of the three, and since there's no annoying rim between bristles and handle, painting my lips is remarkably easy. I do wish the brush head were larger: it doesn't pick up much pigment, meaning I can't get perfect opacity all over my mouth in just a few swipes. With Alabama, the only lipstick I've used with the brush so far, I have to put on three layers. Time-consuming, yes, but very gratifying. I haven't painted anything but my face in at least ten years, but using a lip brush reminds me of the visceral thrill I used to get from painting with watercolors. Plus, I find that Alabama lasts far longer when applied with a brush.

Let's see what this brush can actually do! One layer of Alabama, plus apologies for painfully dry lips: 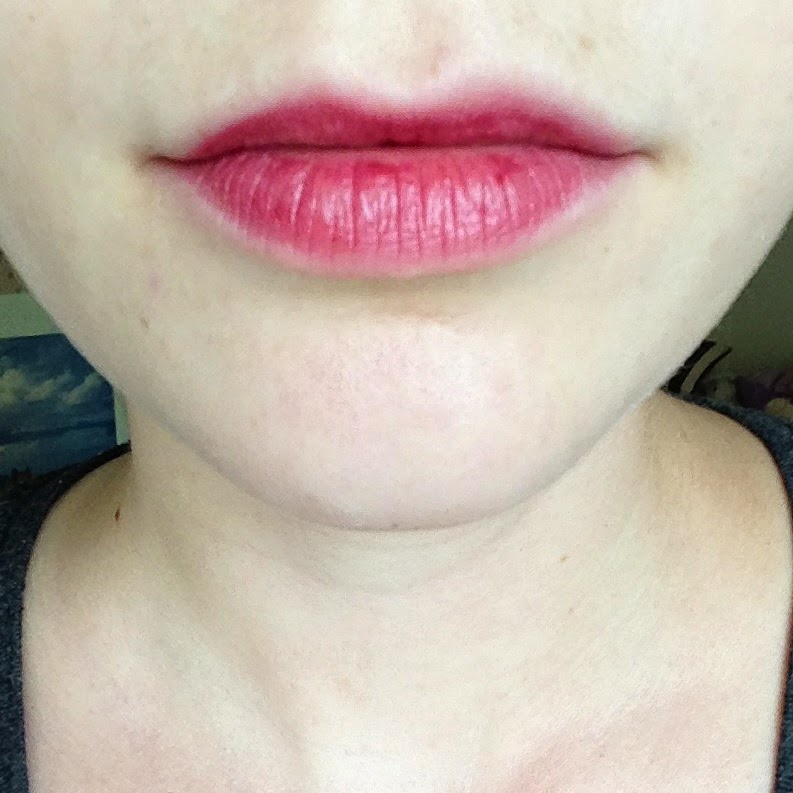 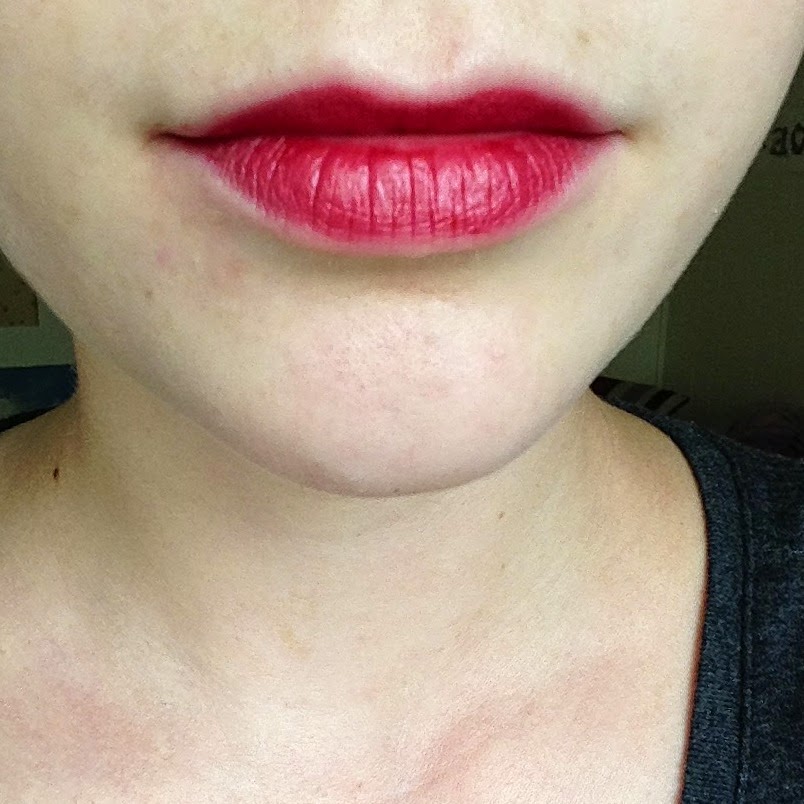 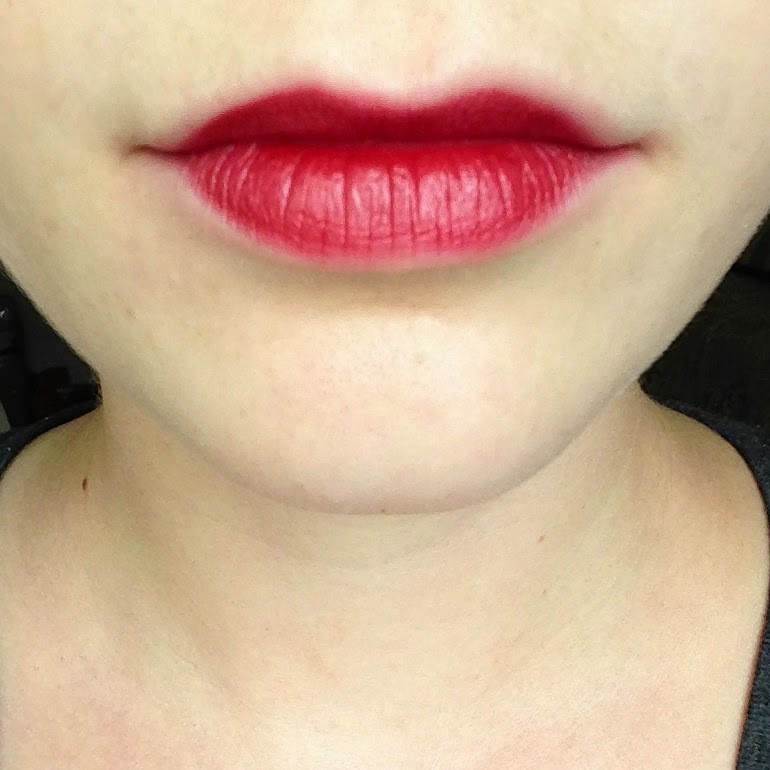 The final result--after applying three layers, I patted the bullet all over my lips to even out the color: 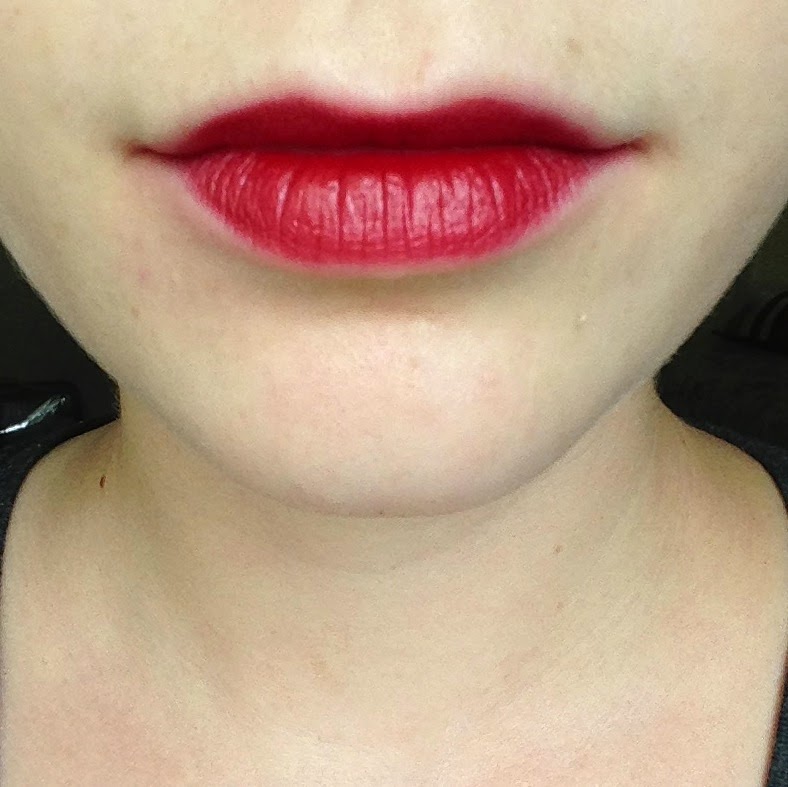 And here are some arm swatches of Alabama, made with the Sephora #81 brush. Left to right: one, two, and three layers. Look at the smoothness and evenness of the swatches! My finicky heart rejoices. 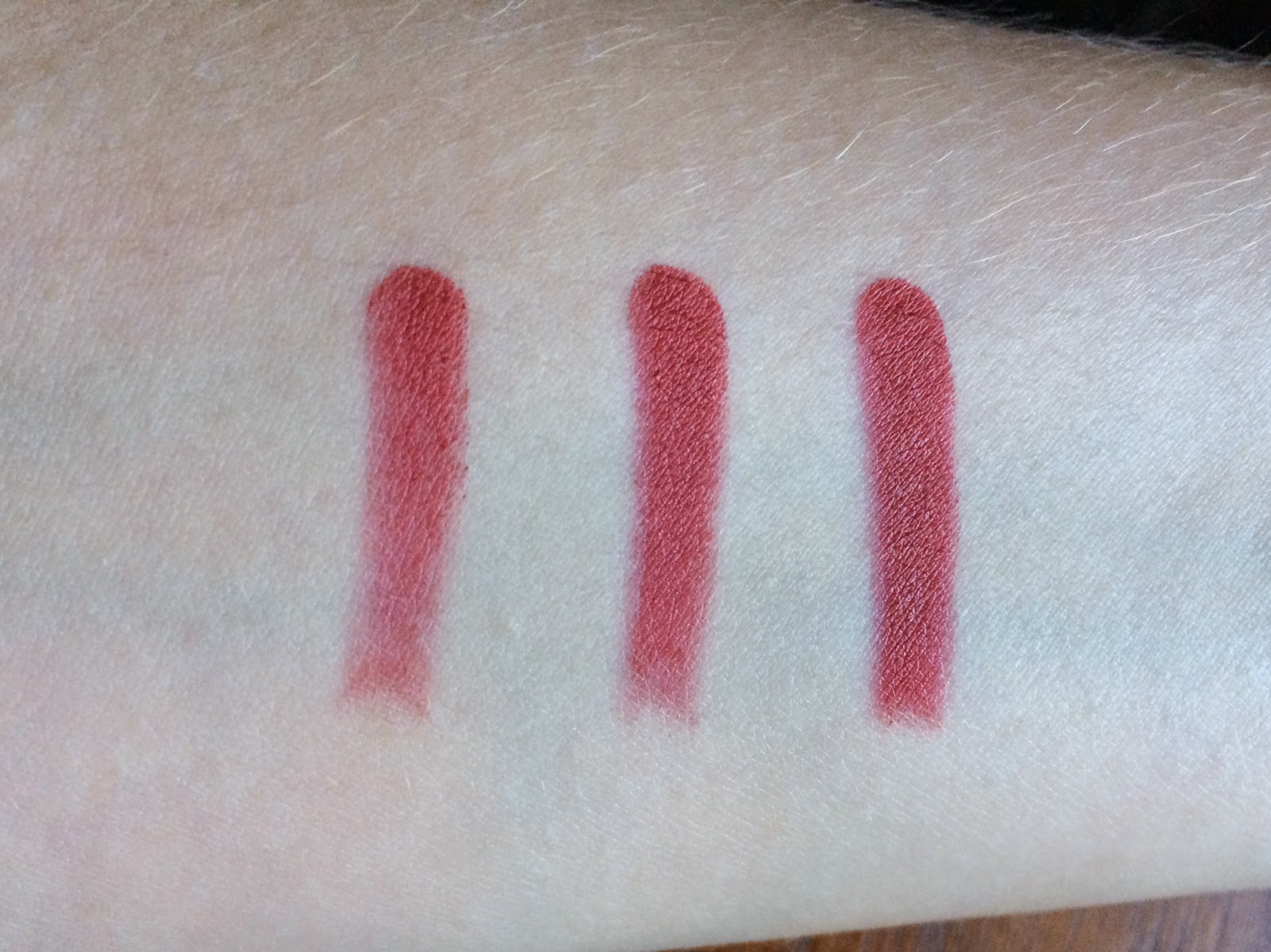 To clean the brush, I fold a paper towel into quarters, wet it, and rub bar soap on it; I've been using Yardley's oatmeal and almond soap, though I've heard that Dr. Bronner's is another good bet. I swirl the bristles around the soapy surface until they're no longer leaving color on the towel, then give them a final rinse. I like that the bristles are tipped with white, which makes it easy to tell when the brush is completely clean again. 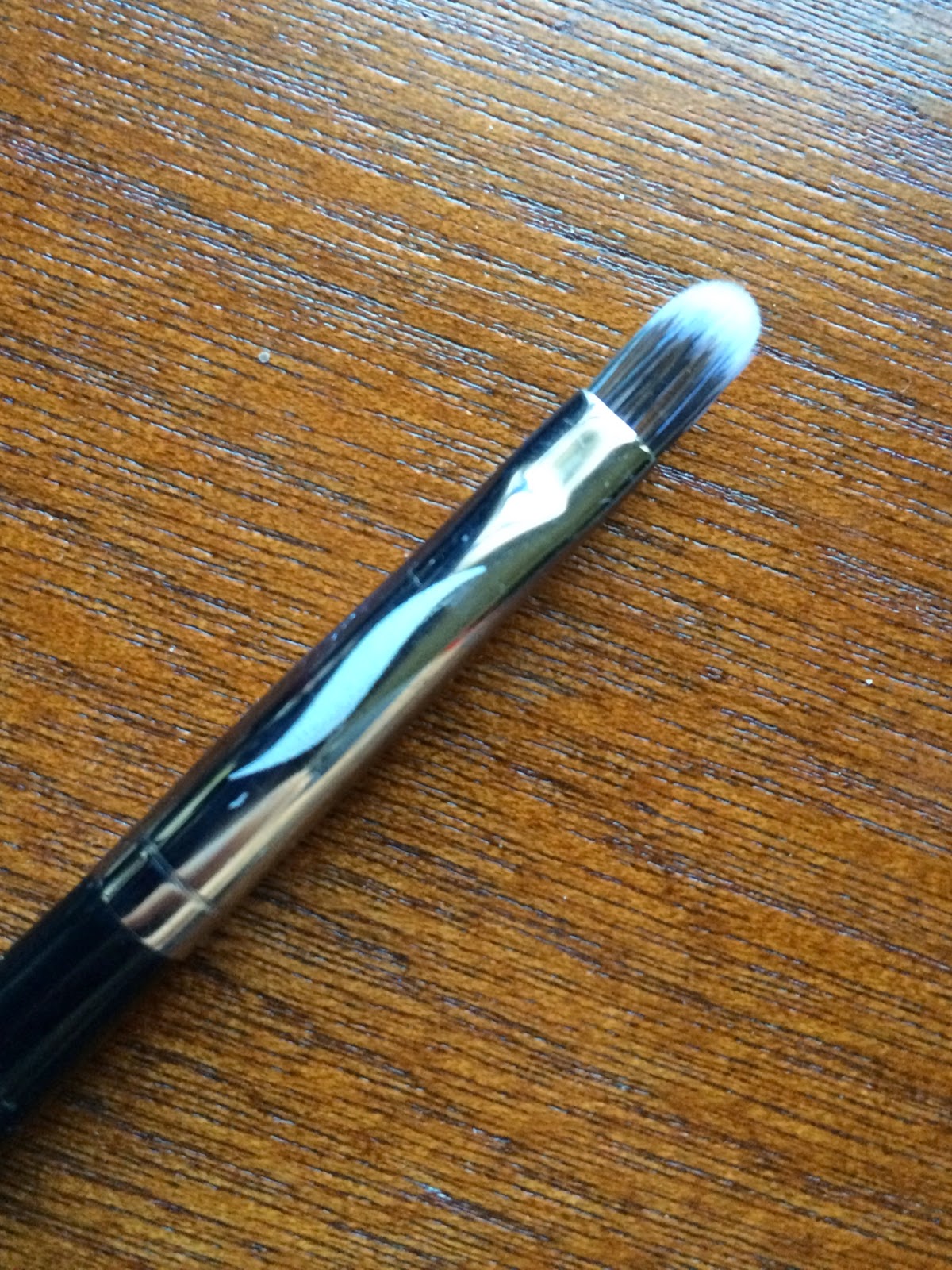 If my eyeshadow brushes had lighter bristles, I'd definitely wash them more than, oh, once a month or so. As it is, let's hope that confessing my secret shame on my blog forces me to correct it.
Posted by auxiliary beauty at 12:30 PM