Good Taste, Bad Taste, and the Fear of "Too Much"

For a long time now, I've thought of myself as someone who takes risks with beauty. I know relatively few people who wear color makeup regularly, and even fewer who wear unconventional colors regularly. When you're the only one in your group of friends who owns multiple purple lip colors, you start to feel smug about your offbeat taste.

Recently, though, I've been reconsidering that smugness. It started on Monday, when I was making myself up before what proved to be an abortive trip to the Asian Art Museum to see this summer's special exhibit, an exploration of the idea of "gorgeous." (The museum is closed on Mondays, which, true to form, I realized only after taking the train all the way across the city.) I'd been feeling guilty about neglecting the Kiko eyeshadows I bought in London two months ago, and had resolved to use one of them in that day's look. I patted NARS Lhasa eyeshadow all over my lids and blended my glittery purple eyeshadow stick from Kiko into the outer half and along my lower lashlines. Some mascara, some neutral cream blush, a coat of semi-sheer red NARS Flamenco lipstick, and--wait. Something was wrong. 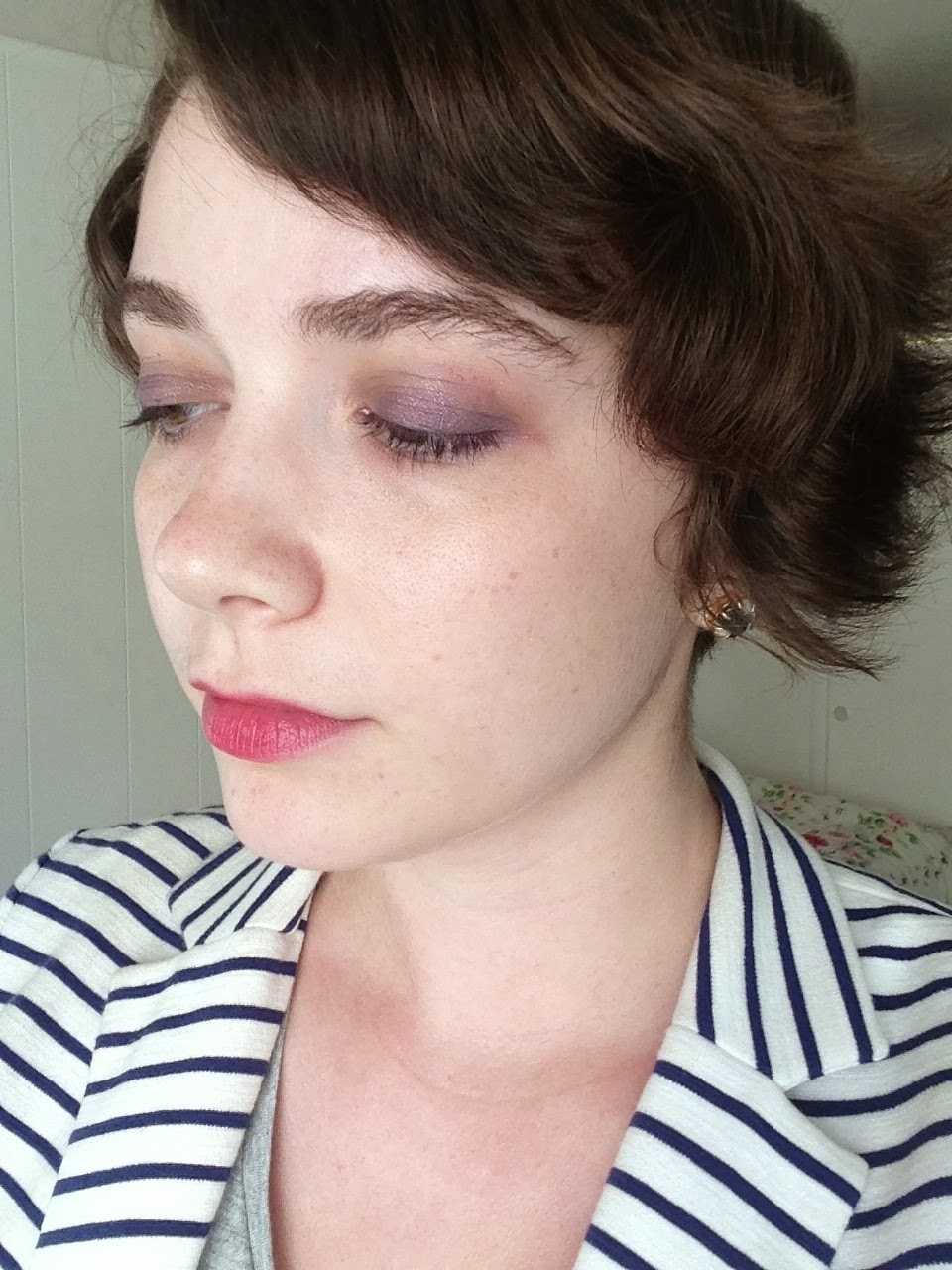 It was Too Much.

I felt uncomfortable wearing that much color on my face, even though Flamenco was my most muted red lipstick and I'd mixed the sparkly purple eyeshadow with a staid neutral. I didn't change my makeup before I went out, but as I waited for one of San Francisco's reliably unpunctual streetcars, I wondered where my idea of Too Much had come from. There was something WASPy and puritanical about it, and though I'm descended from real-life 17th-century Puritans, I was surprised to find this hidden vein of primness deep in my psyche.

Over the years, we all develop personal makeup rules far stricter than the ones we find in magazines. I suspect that all of us, no matter how eccentric or open-minded we think we are, have a deeply felt sense of aesthetic decorum. Our own aesthetic decorum, mind: a set of standards we apply to ourselves but not necessarily to others. In an interview with Into the Gloss, Dita Von Teese expresses this idea more vividly than I can:

"I discovered early on that people have their 'drag'...and very few people really, truly want to stray from it. Generally, and I include myself in this, I have my drag and I don’t want anyone messing with it. I remember when I was little, I was watching the Phil Donahue show or something—that shows how old I am—and they were doing makeovers and they took all these ladies that had been wearing the same makeup for 20 years—you know, the green eye shadow, red lips, bouffant red hairdo, that type of lady. These were ladies who had never had their hair and makeup done any other way. I remember seeing the final makeovers and I was so devastated by how boring they made these women look…and how they looked kind of deflated, kind of disappointed, like they didn’t want to be made-over. Don’t take a lady’s green eye shadow away."

I first read this interview almost two years ago, before I started writing a beauty blog or wearing much makeup at all. But it resonated with me then, and it still does. Though I often wear makeup that others might consider risky or experimental, I don't usually wear makeup that I consider risky or experimental. The amount of makeup I wear has changed over the past few years, as have the colors and placements I favor and the people from whom I draw beauty inspiration. But the fundamentals of my aesthetic haven't changed at all. And I've been guilty of using the phrase "good taste" as shorthand for those fundamentals, and "bad taste" to describe what makes me uncomfortable to wear.

Over the past few days, I've been making a list of all the makeup techniques, finishes, and combinations that I've been avoiding, consciously or not, for the entirety of my makeup-wearing life. It's a pretty long list. I should emphasize that I don't usually judge other people for favoring these items; they're just things that I've filed away in the folder marked "too much for me."
When I wear any of these, I feel less like myself than usual. You'd think a purple eyeliner would produce the same level of comfort as a purple lipstick, but the latter feels like an extension of myself, and the former feels like part of a costume. Or, put another way: purple lipstick feels like part of a costume I designed (my drag, if you will), and purple eyeliner feels like part of a costume designed for someone not quite my size or shape. My aversion to the items listed above is different from my aversion to, say, orange lipsticks or warm brown eyeshadows, both of which I'd wear if I didn't think they were unflattering to my complexion. I'm sure contouring and matte cobalt eyeshadow and the right shade of bronzer would be flattering; they would just feel...wrong. Too Much.

For the sake of contrast, here's my face from from yesterday, when I stayed well within my comfort zone (as proof of which, you've seen all these products on the blog already): 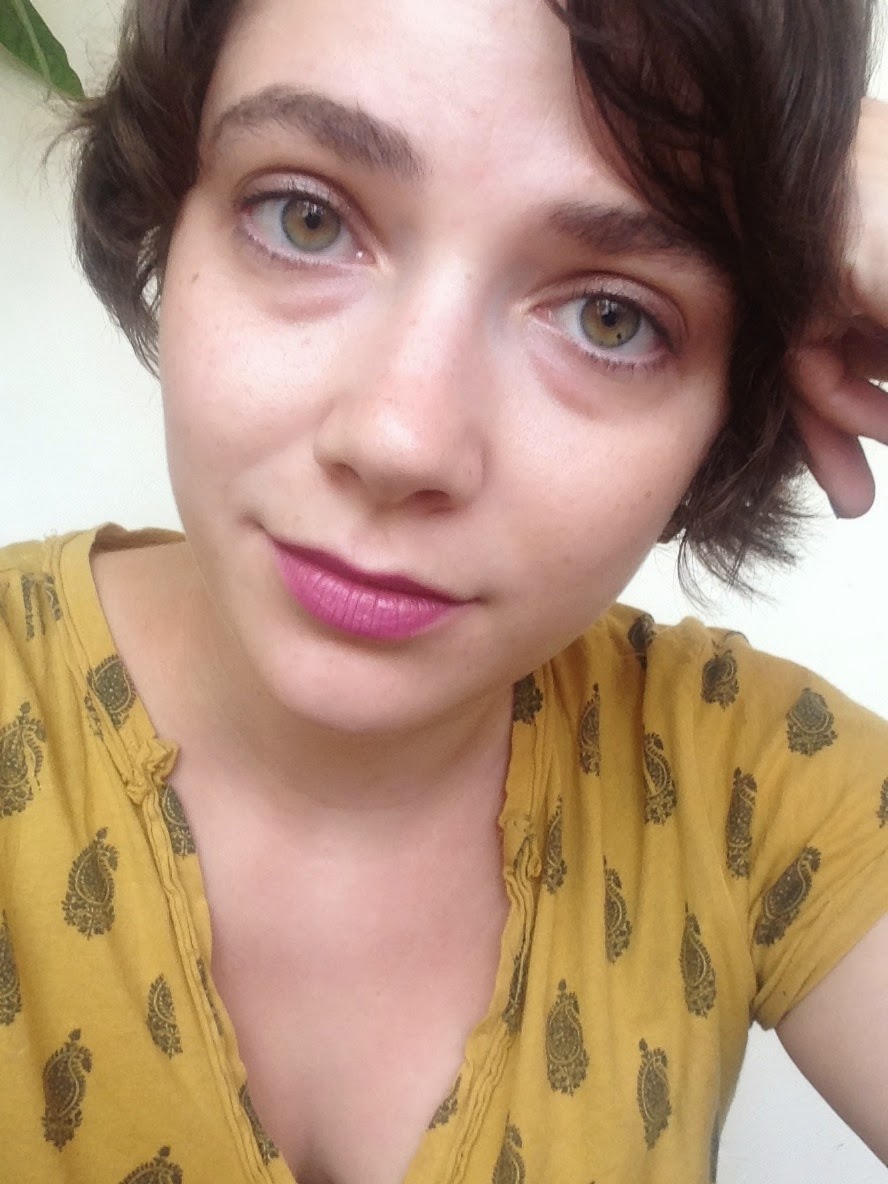 Here we have theBalm Sleek eyeshadow smudged gently into my eyebrows; Maybelline Bad to the Bronze all over my lids, with the shimmery plum shade from NARS Habanera in the outer corners; a light coat of Maybelline One by One mascara; Illamasqua Zygomatic on cheeks; MAC Up the Amp on lips. I'm also wearing NARS Radiant Creamy Concealer in Vanilla under my eyes, but I've been sick since Sunday and my dark circles are winning, guys.

That's my makeup uniform: bold (or bold-ish) lips, neutral eyeshadow, very understated blush and mascara. In fact, I almost always wear Up the Amp with this shirt, and I almost always wear Bad to the Bronze with Up the Amp. I put those colors together and feel confident that I'm in good taste--good taste for me, for my character and lifestyle, for the persona that I choose to project into the world.

At the same time, I suspect that a lot of what I perceive as "good taste" or "bad taste" has to do with skill. Drivel about Frivol was the first beauty blog I read regularly, and I remember marveling at Kate's ability to make the most counterintuitive color combinations look natural. "Natural" is probably the wrong word. Organic, maybe? Nothing she wore ever read as Too Much, because it was so much a part of her. Likewise, some people can wear multicolored cat eyes and black lipstick and pass it off as a part of them. Maybe it's really about confidence, not skill. Maybe I'm rambling.

I thought about all this today while wandering through the four rooms that comprised the Asian Art Museum's "Gorgeous" exhibit. Yes, I finally made it to the museum, after stopping at the hospital for a strep-throat screening; at Sephora for a rollerball of Fresh Citron de Vigne perfume; at CVS for two of the new Milani Bella eyeshadows (Taupe and Rouge!); and at the Ferry Building for a grilled cheese sandwich with Cowgirl Creamery cheddar, caramelized onions, and maple mustard. Five days of the sore throat from hell, plus every conceivable period symptom, will put you in a self-indulgent mood. (Speaking of good taste...)

"Gorgeous," which features artworks from both the Asian Art Museum and SFMOMA, is organized around the idea that gorgeousness is beauty with something off. Gorgeousness can be tacky, grotesque, excessive, or surprising; it's almost always Too Much, except when it's Not Quite Enough. Shiro Kuramata's Streetcar-inspired "Miss Blanche" chair from 1988 was one of my favorite pieces: 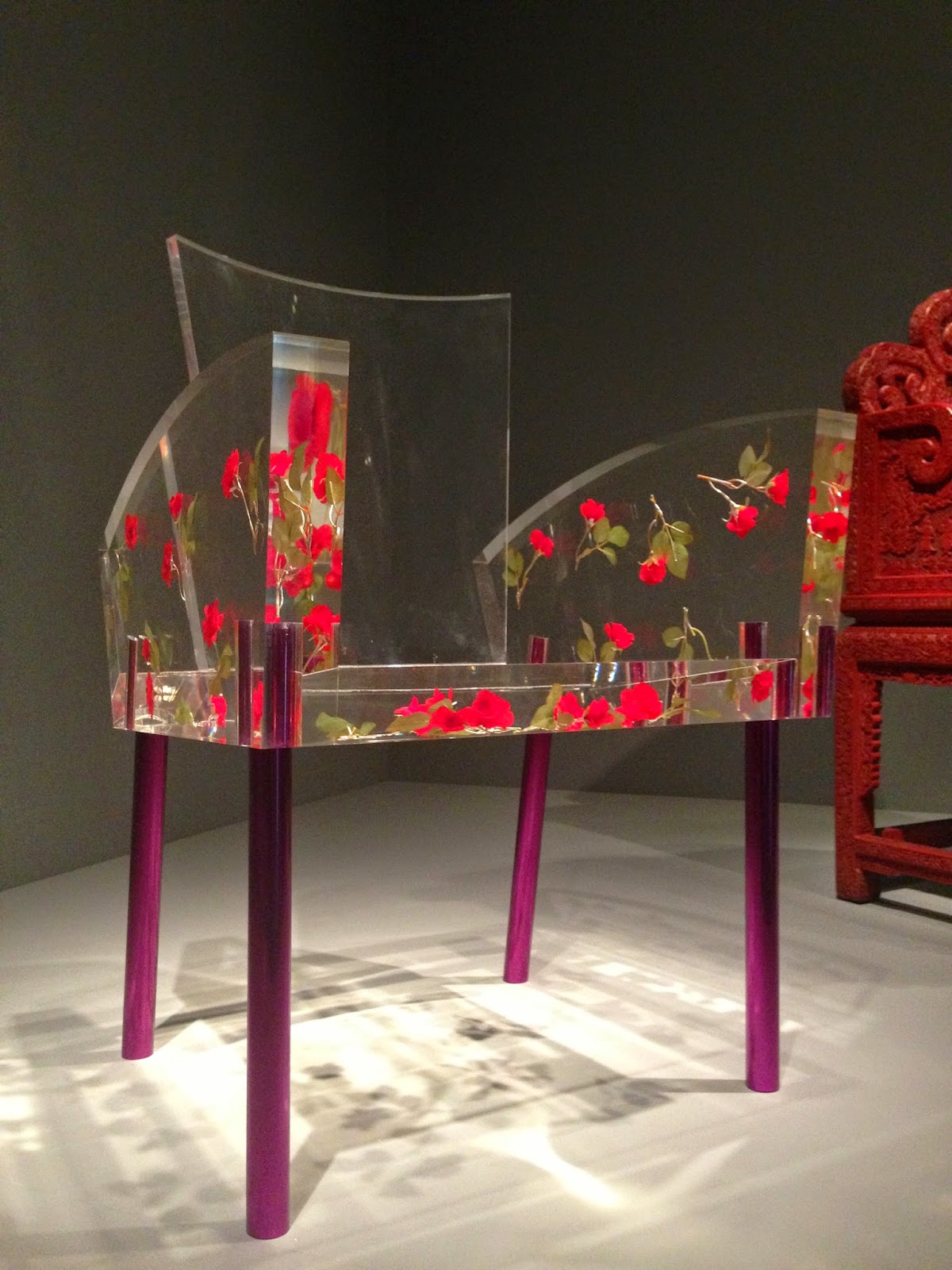 I also lingered in front of this 16th-century (?) Japanese pot, deliberately misshapen and mis-glazed: 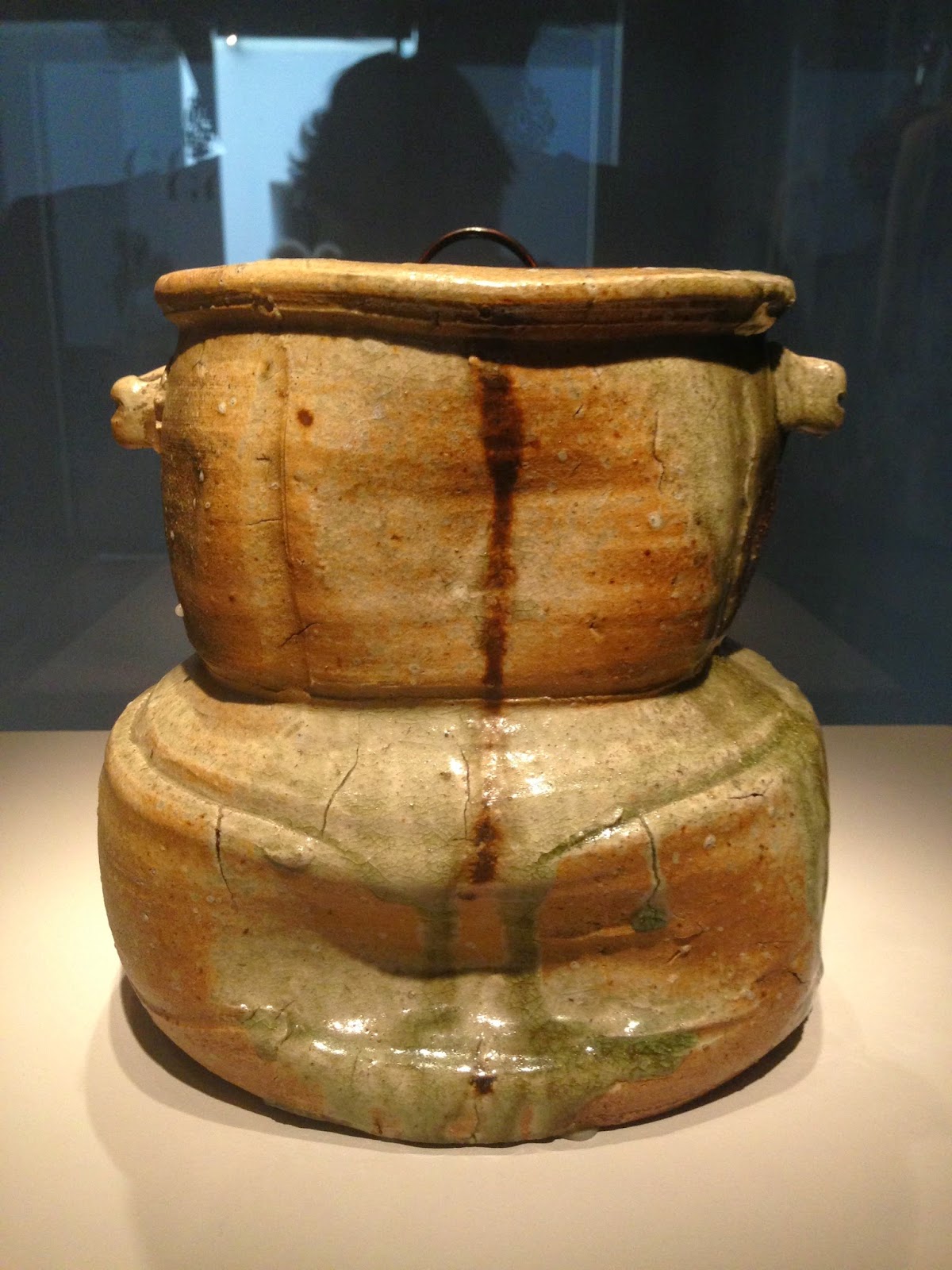 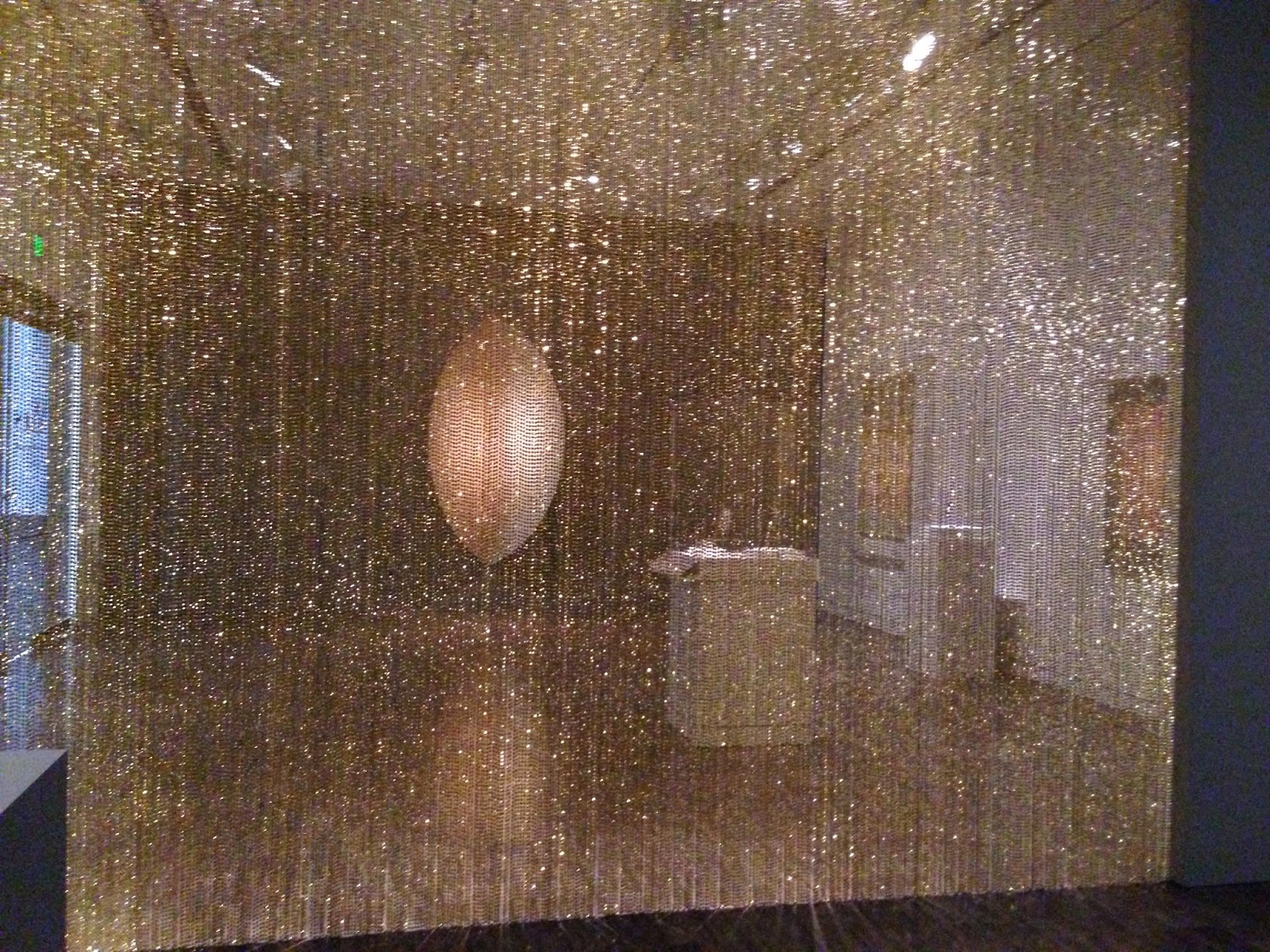 Definitely worth a visit if you're in San Francisco between now and Sep. 14.

What is "too much" for you, makeup-wise? And where did your notions of good and bad taste come from? I've come to realize that I have next to no idea where mine originated, and that's a little unnerving.
Posted by auxiliary beauty at 11:54 PM

Email ThisBlogThis!Share to TwitterShare to FacebookShare to Pinterest
Labels: fotd, introspection, state of the stash