Dates Purchased: May and June 2013

Notes: Since I don't have all my lipsticks with me in San Francisco, I'm writing my Vivids reviews slightly out of chronological order. I bought one of my five Vivids, Fuchsia Flash, before either of the two I'm reviewing today, but Vivid Rose and Brazen Berry were the two I brought from home, so here we are. 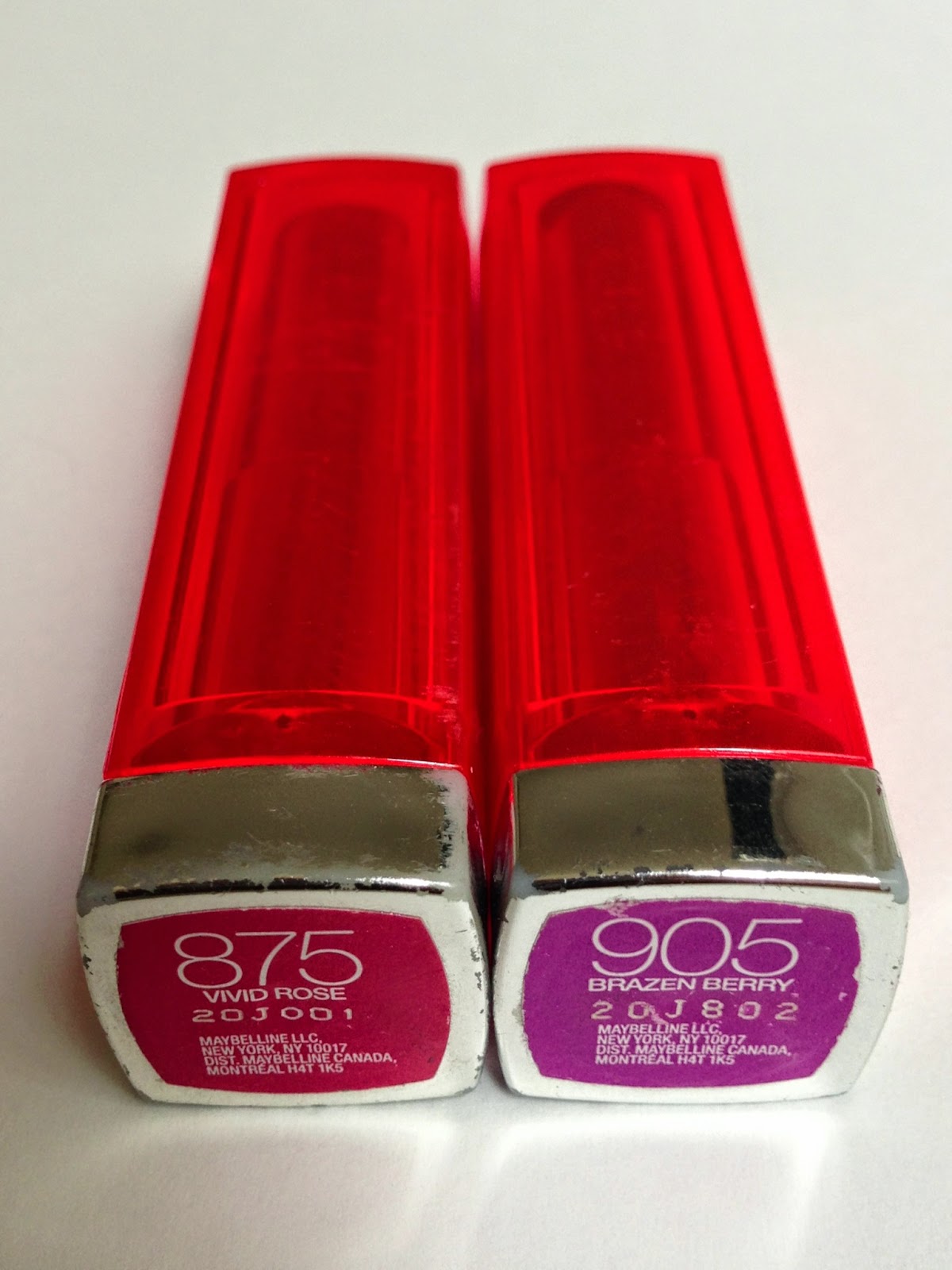 When the Vivids came out in the spring of 2013, they were welcomed with the same rapture that had greeted the Revlon Lip Butters in late 2011. I read somewhere that beauty brands like to release at least one bright lipstick in every new collection because the bright colors draw customers in, even though the bestsellers are almost always the neutral lipsticks! So I suppose Maybelline was taking a risk with a collection composed entirely of brights, but people certainly fell for the hype, and by "people" I mean "yours truly."

If you came here hoping for a post debunking that hype, you'll be disappointed. The Vivids are my favorite drugstore lipstick formula, and one of my favorite lipstick formulas ever. The other Maybelline Color Sensational lipsticks I've tried (e.g. Ruby Star, Nude Lust) haven't blown me away formula-wise, but the Vivids are smooth, shiny, pigmented, long-lasting, and beautifully moisturizing, even on my sad, desiccated lips. I'm not crazy about the packaging (all the Vivids have those bright, tacky orange caps, and as you can see in the photo above, the silver paint has begun to wear away from the bases), but for me, at least, cheap-looking packaging is a minor problem.

That said, I have to add that I wish Maybelline were cruelty-free. If they were, I'd probably get a picture of Vivid Rose tattooed on my butt. As it is, I feel hesitant to recommend these lipsticks wholeheartedly. I know, I know: my stance has been very inconsistent over the past few months. I think it was February of this year when I decided to buy cruelty-free beauty products whenever possible, and though I've done a decent job of holding myself to that promise, I've had a few lapses. Part of the problem is that cruelty-free drugstore makeup is almost non-existent here. So far as I know, Milani is 100% cruelty-free, but the other big drugstore brands have all compromised themselves in some way. NYX was just acquired by L'Oreal. Revlon sold in China until this year, but even though they've pulled out of the Chinese market and their products aren't currently being tested on animals, they reserve the right to sell in other markets that require animal testing. Maybelline has never claimed to be cruelty-free.

My position on all this is constantly changing. I realize that ethical consumption is impossible in late capitalism blah blah etc. I try to patronize cruelty-free beauty brands, but many of those brands (with the exception of smaller indie companies) are owned by giants like L'Oreal or Shiseido. The meaning of the phrase "cruelty-free beauty" varies from source to source. It's all very difficult to puzzle out, but it's a constant source of worry for me. In any case, I bought these two lipsticks over a year ago and plan to use them until they run out, so let's carry on with the review.

Brazen Berry is a bright pinky purple (very Radiant Orchid), and Vivid Rose is a deep raspberry fuchsia. All my lipsticks eventually acquire this pointe-shoe shape. 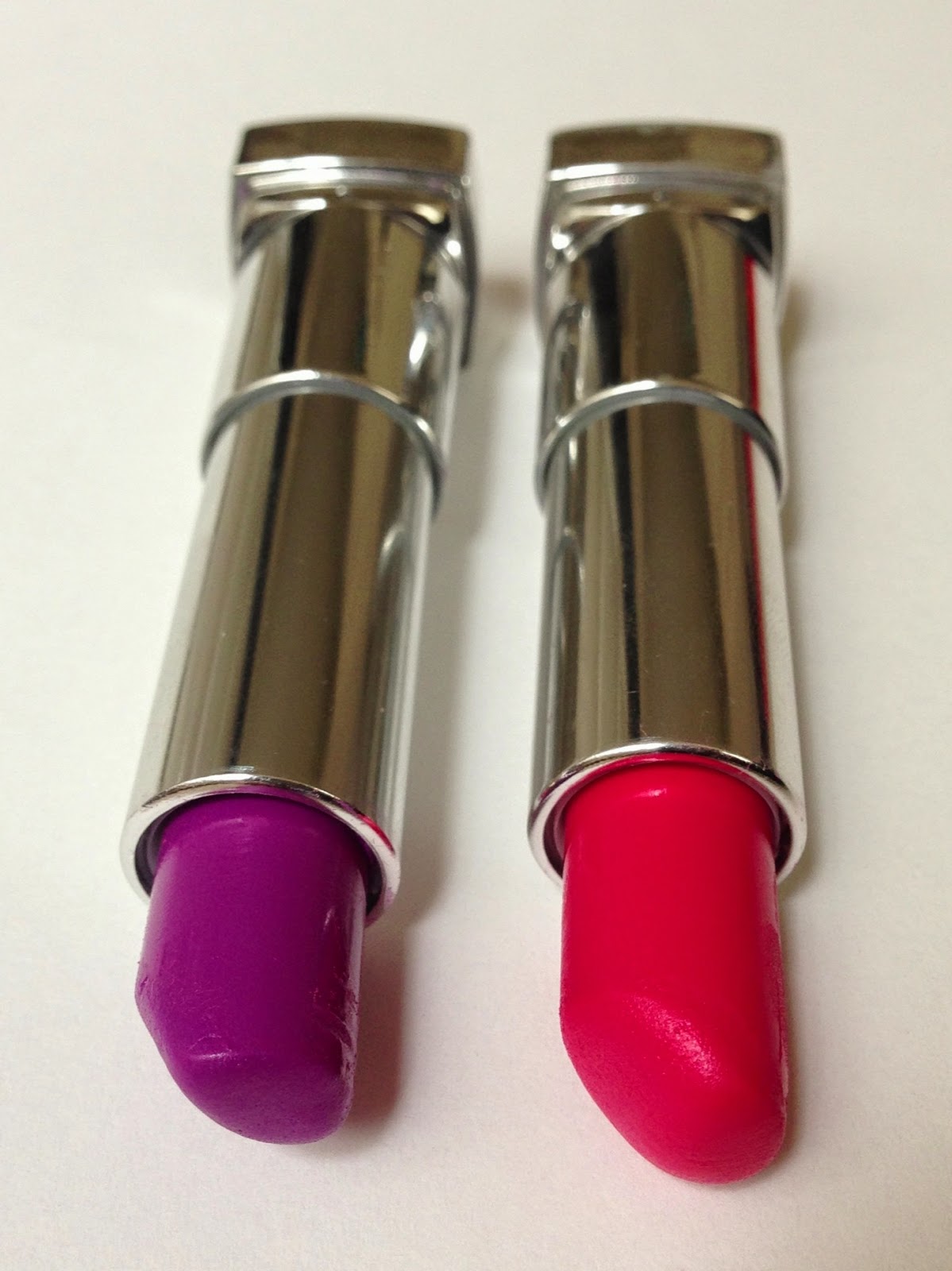 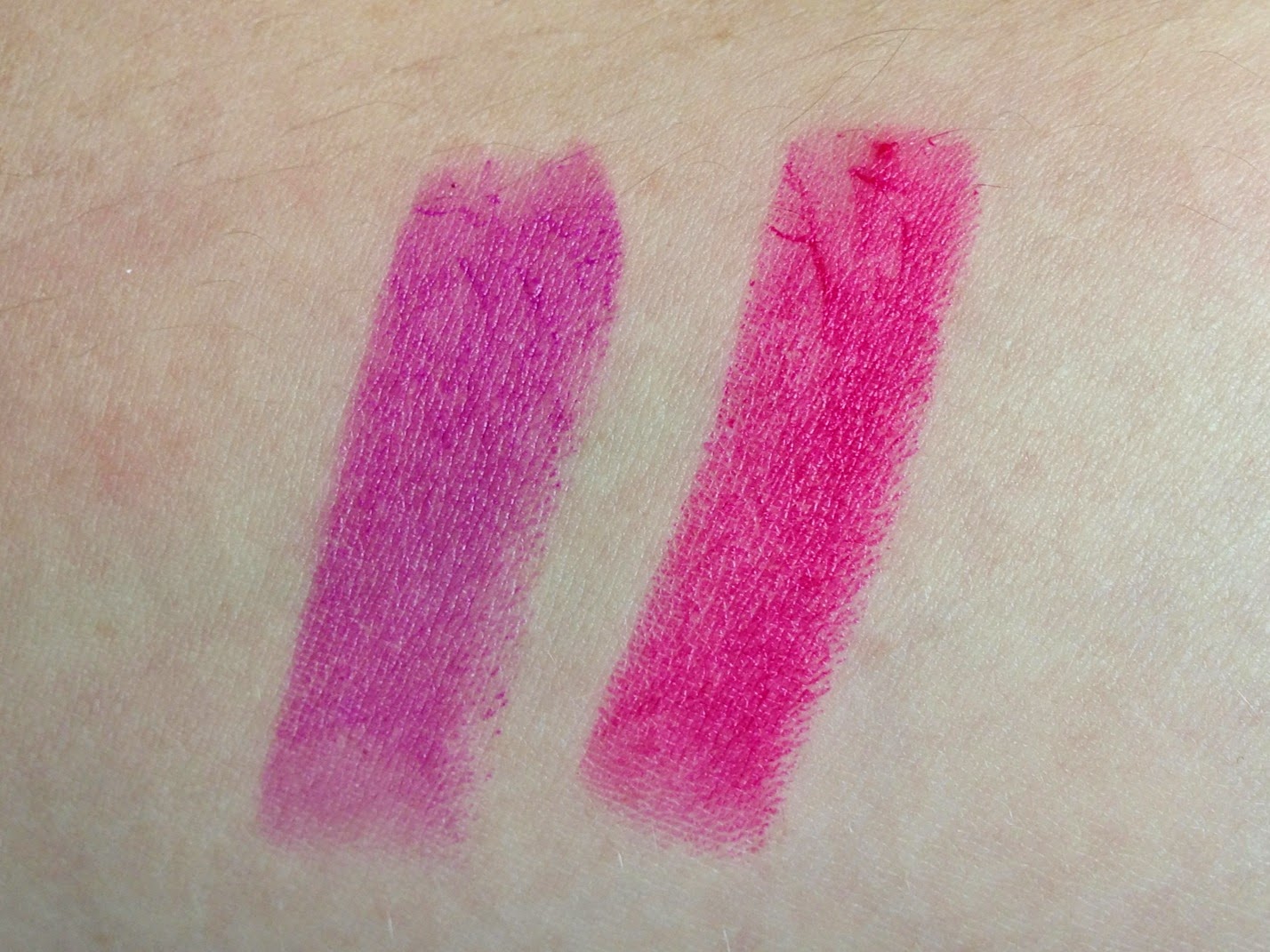 The only other fuchsia lipstick I have with me is MAC Candy Yum-Yum, which is brighter, bluer, matte-er, and more neon than Vivid Rose. Candy Yum-Yum on the left, Vivid Rose on the right: 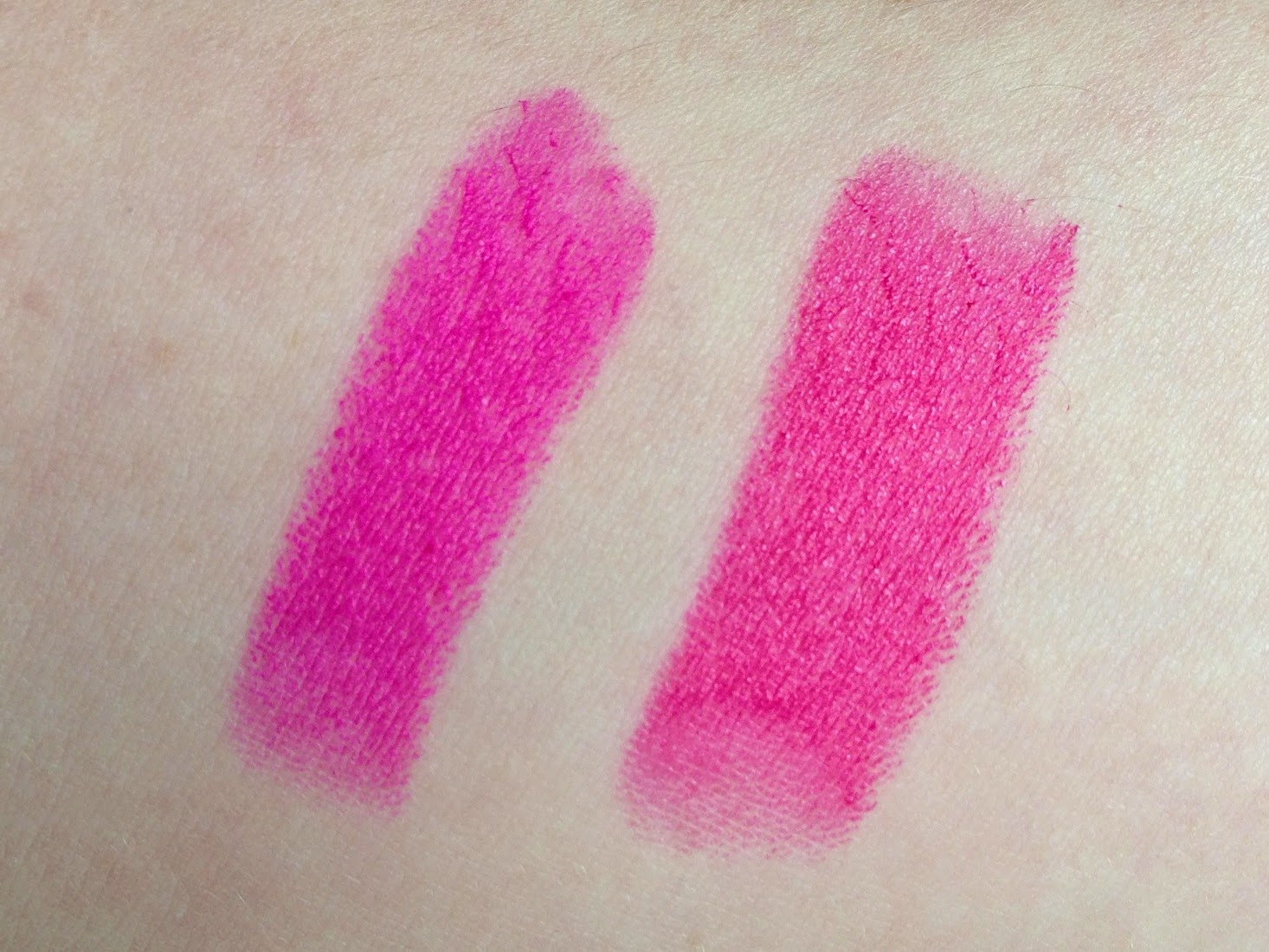 Vivid Rose on lips, directly in front of the window (with this neighborhood's unrelenting cloud cover making the color read bluer than usual; I swear I had year-round SAD when I was growing up here): 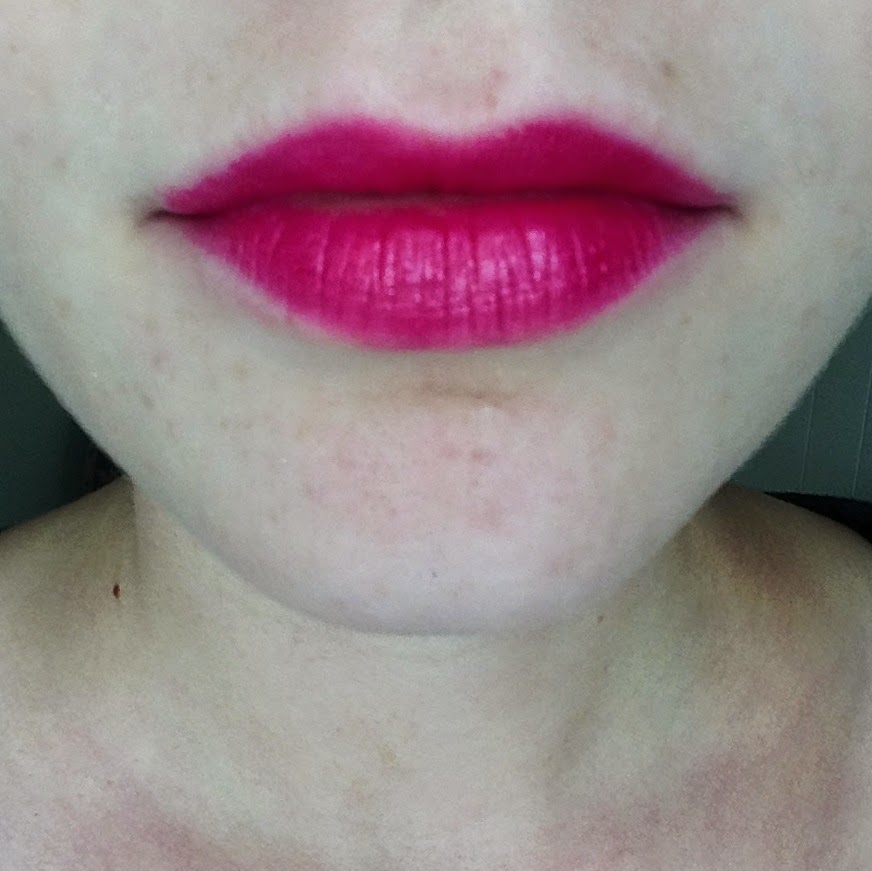 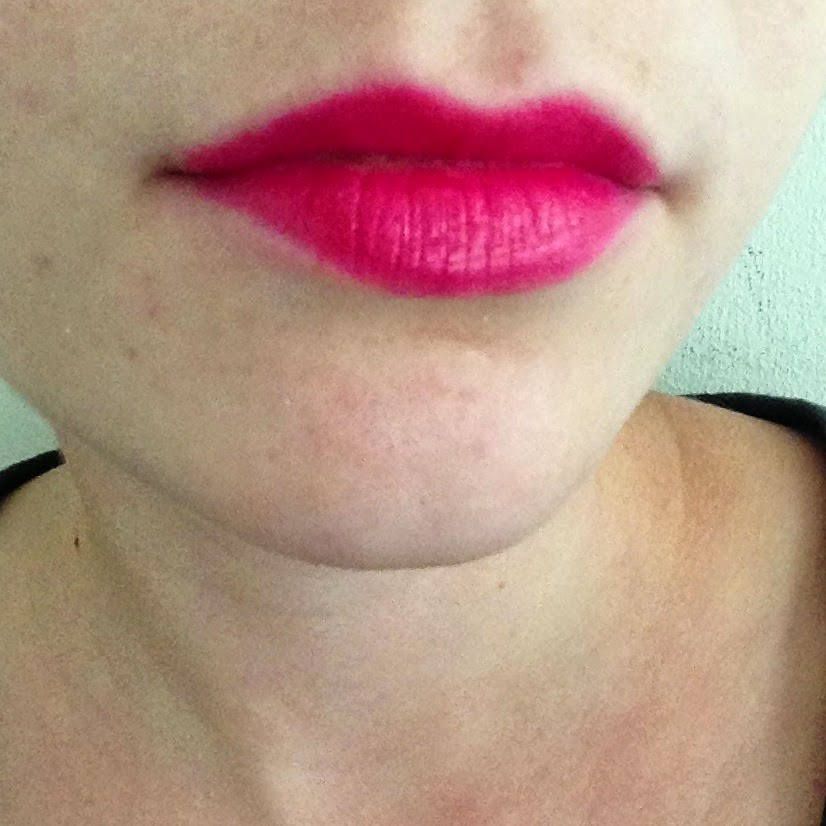 Full face from a few weeks ago, plus NARS Lhasa eyeshadow: 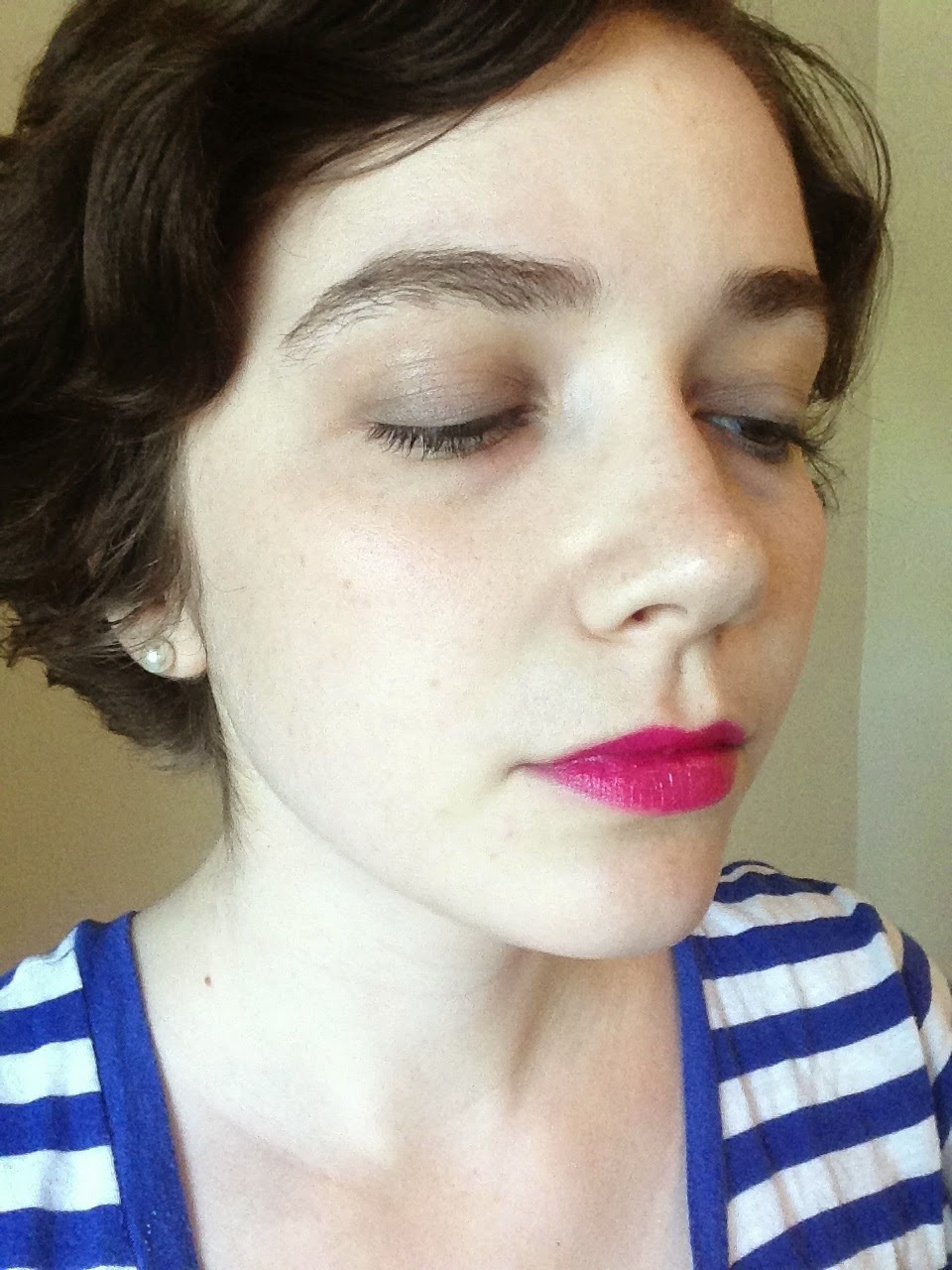 I love wearing fuchsia lip colors, and Vivid Rose is one of my favorite fuchsias (its only rivals being Candy Yum-Yum and Revlon Fuchsia). I don't wear it terribly often, because the color is so intense, but I wish I had more occasions to pull it out. Here I am wearing Vivid Rose at a wedding reception last year: 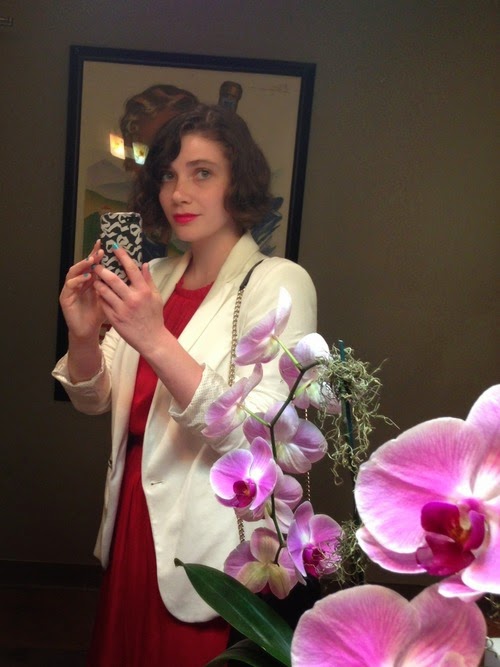 Brazen Berry is my lightest, brightest purple lipstick. From left: Brazen Berry, NYX Butter Gloss in Raspberry Tart, MAC Up the Amp, and a custom-made lipstick from the Bite Beauty Lab. Pardon the wonky swatches; I ran out of left-forearm space and had to use my left hand to swatch on my right arm. The horror. 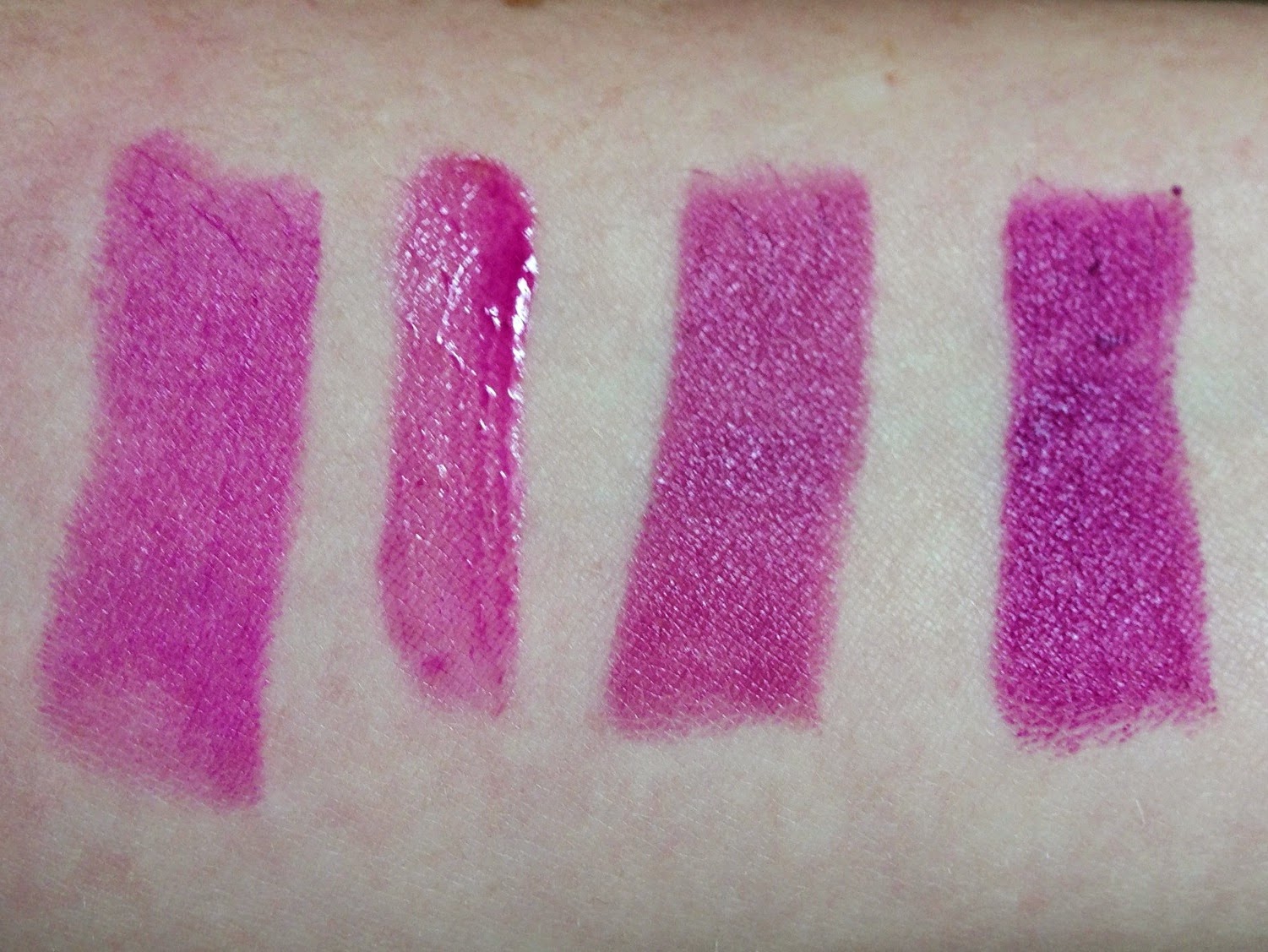 On lips, in front of the window: 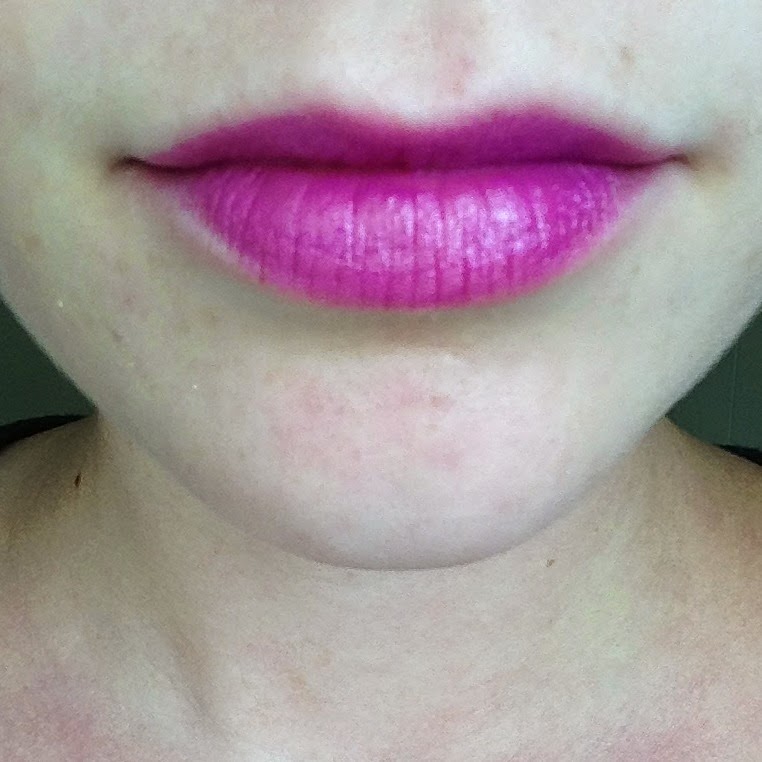 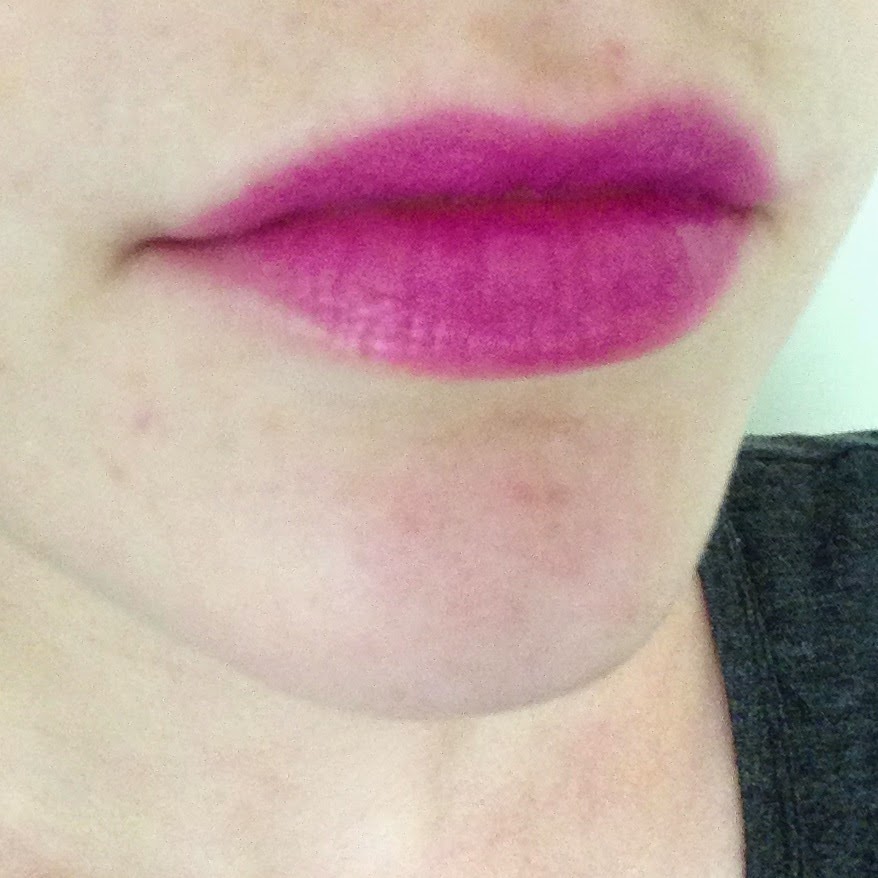 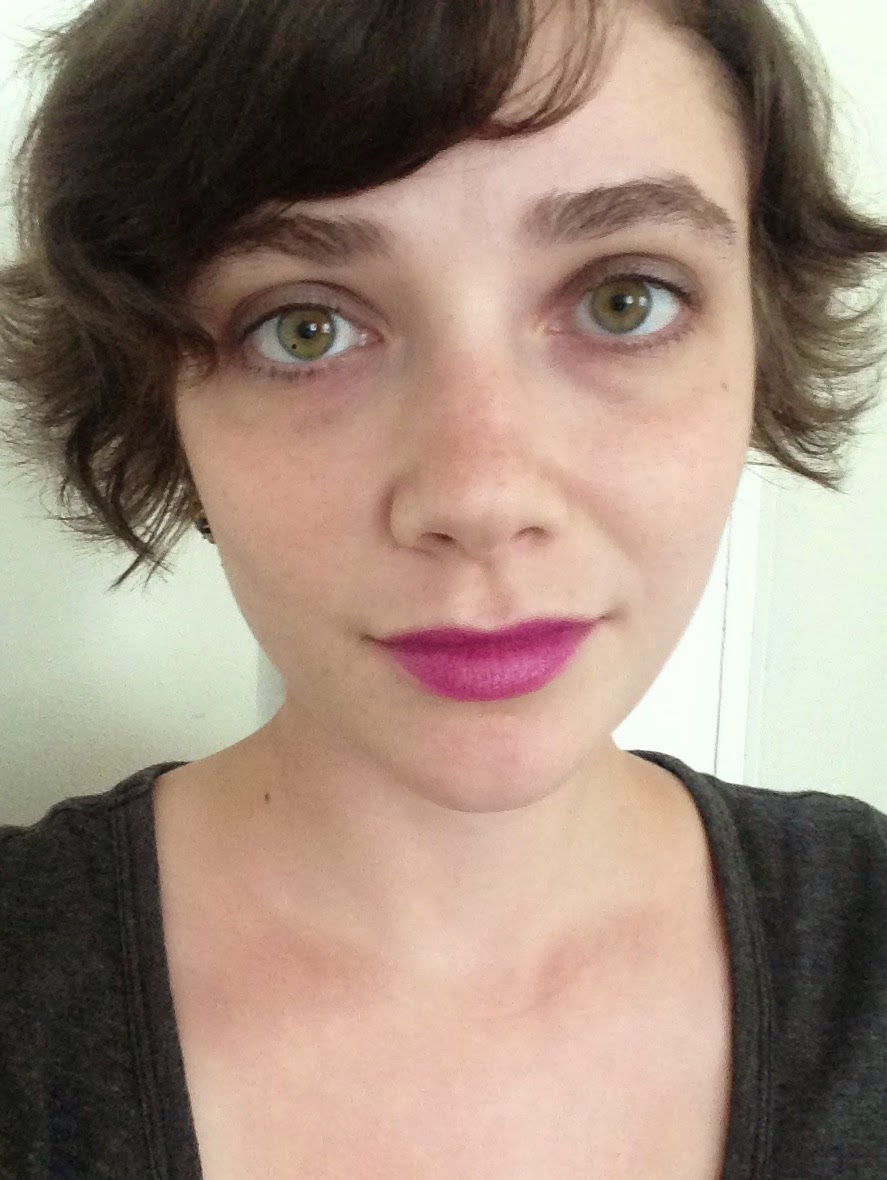 Brazen Berry goes on translucent and needs two coats for full opacity (which is why it got an A- instead of an A), but the slight sheerness actually works in its favor. It's one of my most-worn lipsticks, and certainly my most-worn bright lipstick, and I think the sheerness is the reason. Brazen Berry is unmistakably purple, not one of those cowardly purple-tinged pinks, but it does let your natural lip color peep through. My mom loves it, too! I recommended it to her after Up the Amp gave her an allergic reaction, and I noticed yesterday that she's bought two backups of it. :D She likes layering it with Revlon Berry Haute, a mauvier purple, to tone down the brightness.

I'm now settled in San Francisco for the next two and a half weeks, and the jet lag was less bad than I feared (though I did fall asleep before 7 pm that first night). Today, on my way back from a neighborhood coffee shop, I passed a chalkboard sign advertising cupping, massage, and past-life regression. It's good to be back.
Posted by auxiliary beauty at 6:21 PM