Being a True and Compleat Account of a Recent Affair of Honour. Pistols at dawn, or swords, or concealer wands... 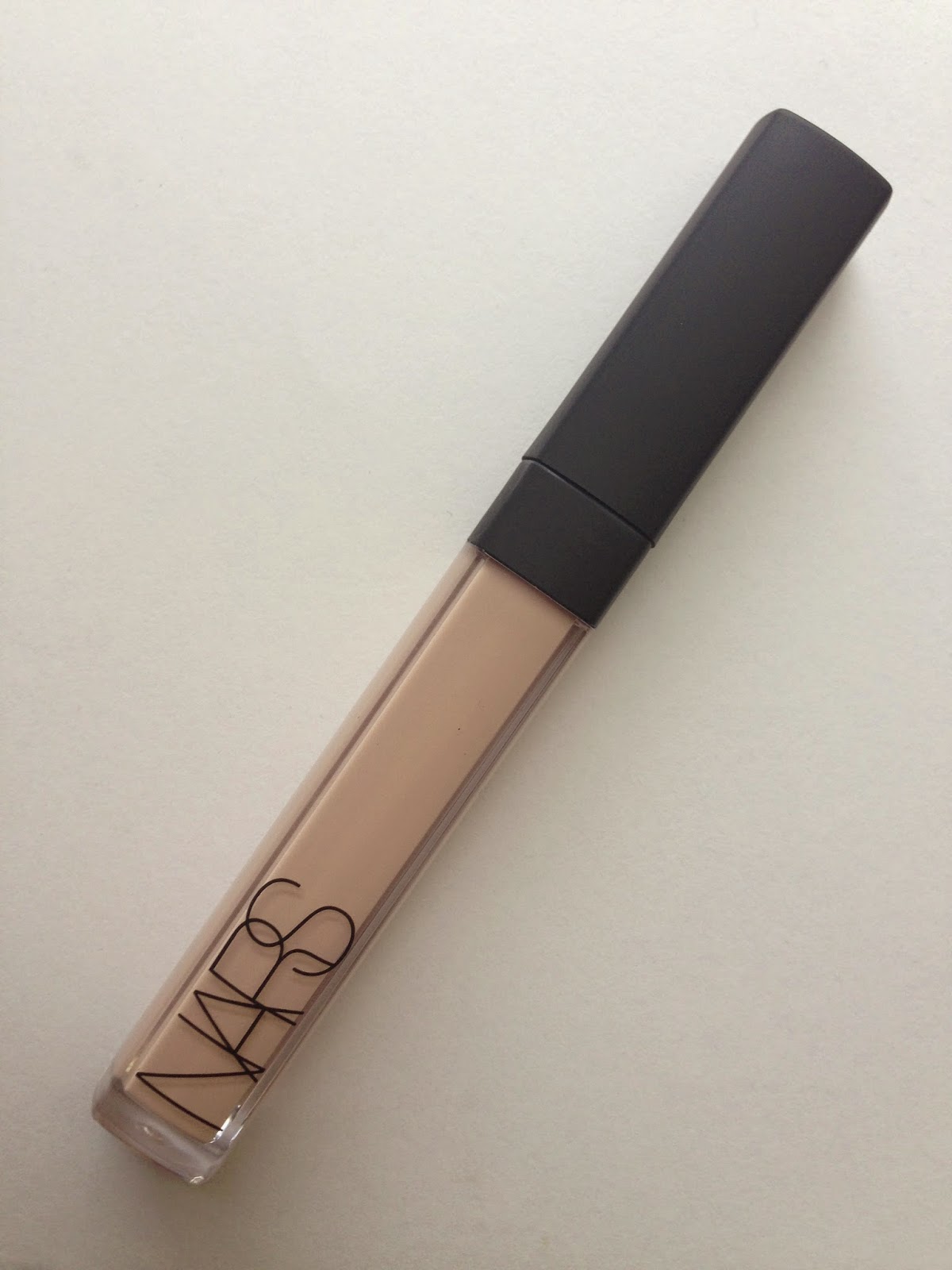 I've had reddish-purple undereye circles since early childhood. Most of the time, I don't even think about them. They're not caused by diet choices or sleep habits, which means they're not going anywhere; they're as much a part of my body as the freckled birthmark on my right hand. But just as my freckles get darker when exposed to sun, my dark circles do grow bigger, puffier, and more prominent when I'm sleep-deprived or under stress. Here I am a month ago, for instance, during a particularly arduous period of writing. I think I was wearing concealer that day, believe it or not: 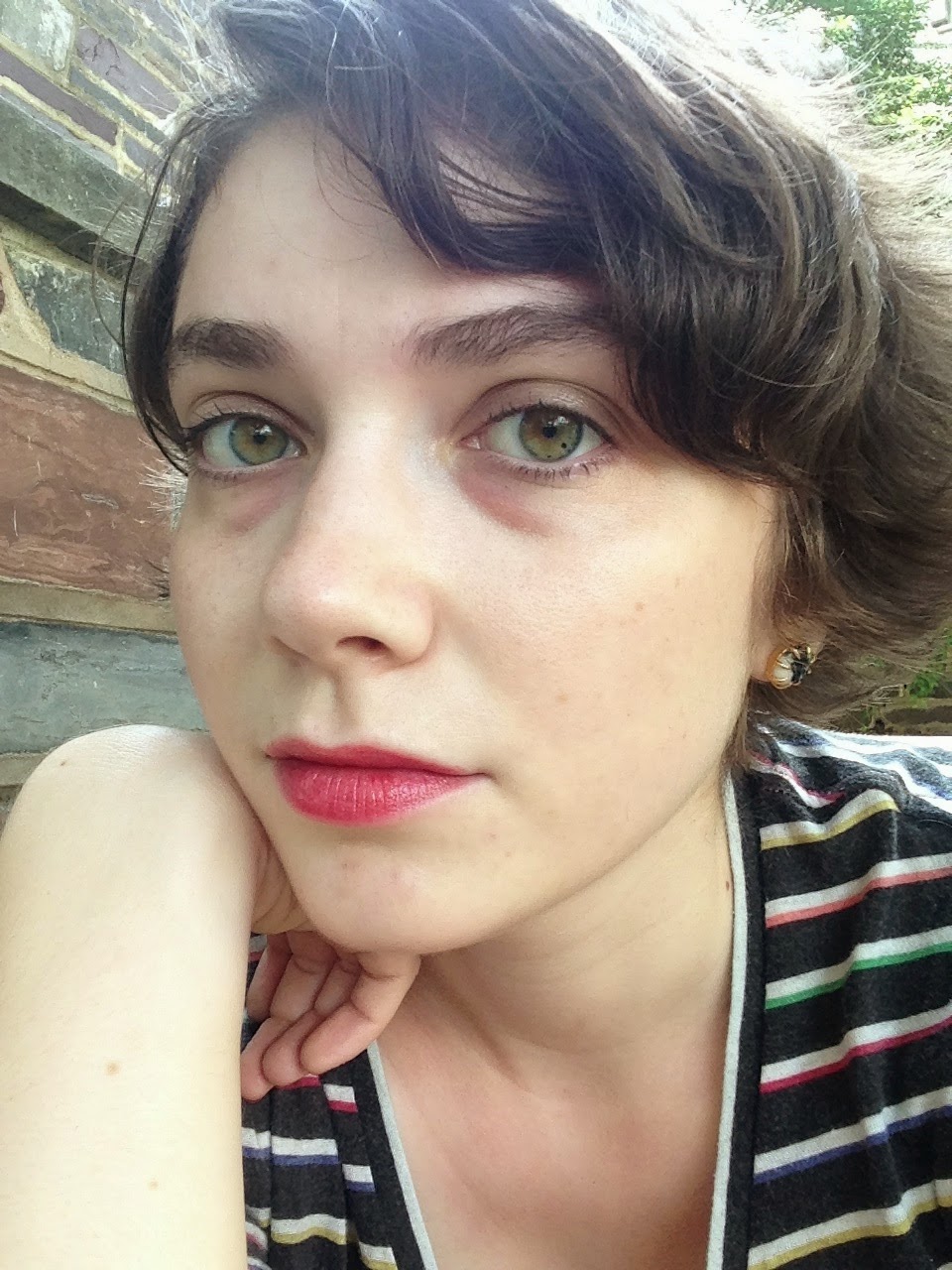 Sure, there's a certain midnight-oil glamour to this, but I've always wanted the option to not look like I haven't slept in a week, you know? Until very recently, the only concealer I'd ever used was CoverGirl Fresh Complexion concealer in either the fairest shade (Ivory) or the second-fairest (Classic Ivory), depending on what was available at the drugstore. That concealer was fine for hiding the occasional hormonal breakout, but it did almost nothing for my dark circles, and so I came to believe that they just couldn't be disguised. I felt uniquely cursed. I've always had a genius for feeling uniquely cursed.

Earlier this week, my mom and I were doing some shopping downtown. Under the harsh fluorescent lights at DSW, I caught a glimpse of myself and winced. I looked positively haggard. I'd slapped on some CoverGirl that morning, but it had done nothing for me. This, I decided, was the day that I would try NARS Radiant Creamy Concealer. I'd been hearing about its virtues for at least a year, and we were headed to the nearby Sephora anyway. I was curious to see whether a high-end concealer could really do what my trusty drugstore concealer couldn't.

At the NARS display, I asked a saleswoman which shade of concealer she thought would suit me. (Protip: always approach the Sephora salesperson with the best eye makeup.) She recommended Vanilla, the second-lightest color in the Radiant Creamy Concealer range. I let her apply the concealer under my eyes; it was the first time anyone else had ever put makeup on me, and it was an odd sensation to feel the brush doing its work. When she stepped back and let me look in the mirror, I was stunned. I had never seen my face without its dark circles, and the effect took some getting used to. My first impression was that my eyes looked smaller; I'd never realized that the purplish shadows had an enlarging effect. After a few seconds, though, I liked what I saw. The shadows weren't gone completely, but they were greatly reduced. My mom bought me the concealer, which was a momentous event for her, too: it was the first time she'd purchased a beauty product outside a drugstore. If a lifelong CoverGirl and L'Oreal devotee can be persuaded to drop $29 on a concealer, you know it's good.

I've been playing around with the Radiant Creamy Concealer for four days now, and here are my impressions so far: 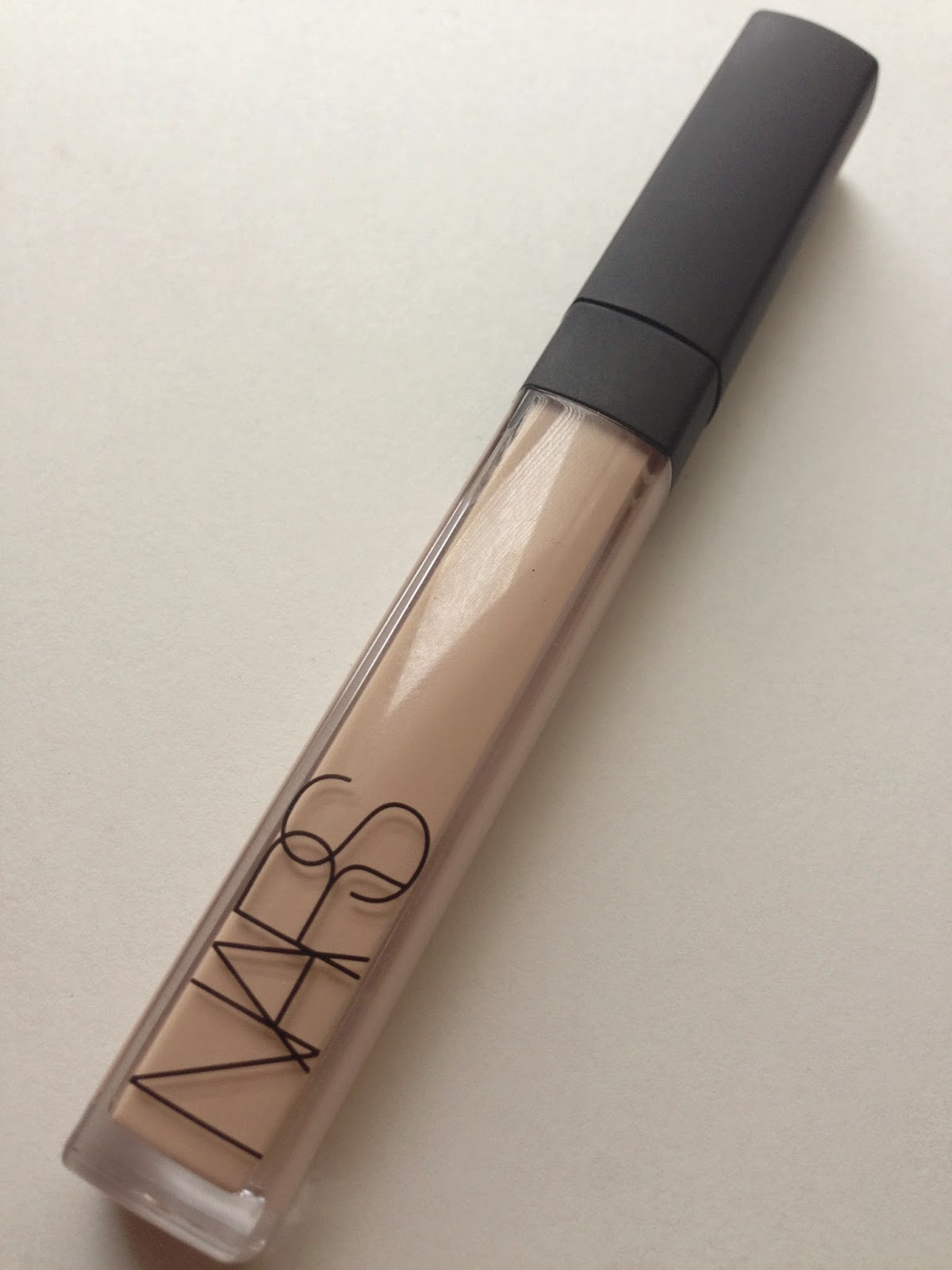 It has a standard doe-foot applicator: 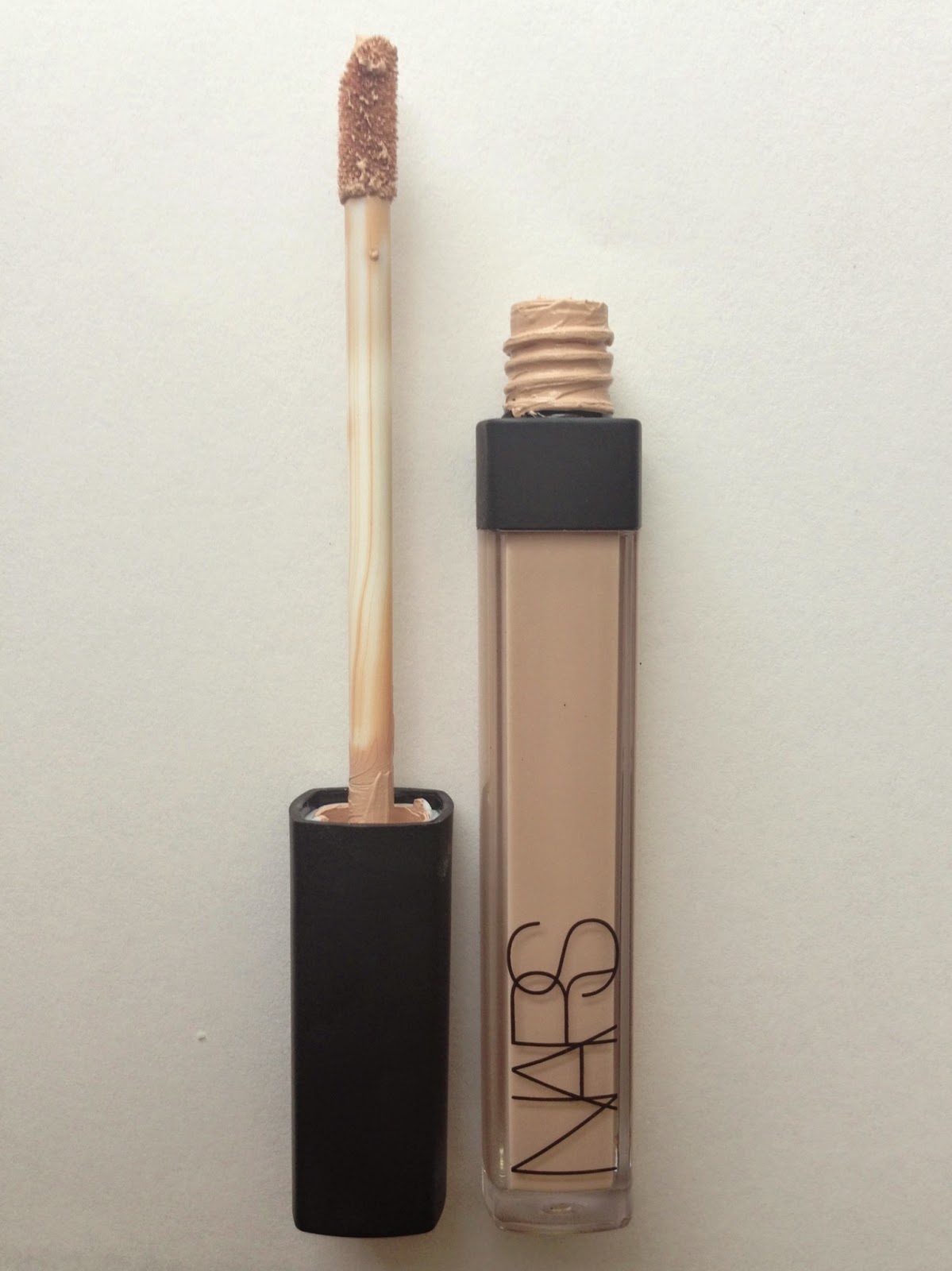 Color: NARS classifies Vanilla as "Light2," the second-lightest color in the ten-shade range. Here it is swatched on my arm: 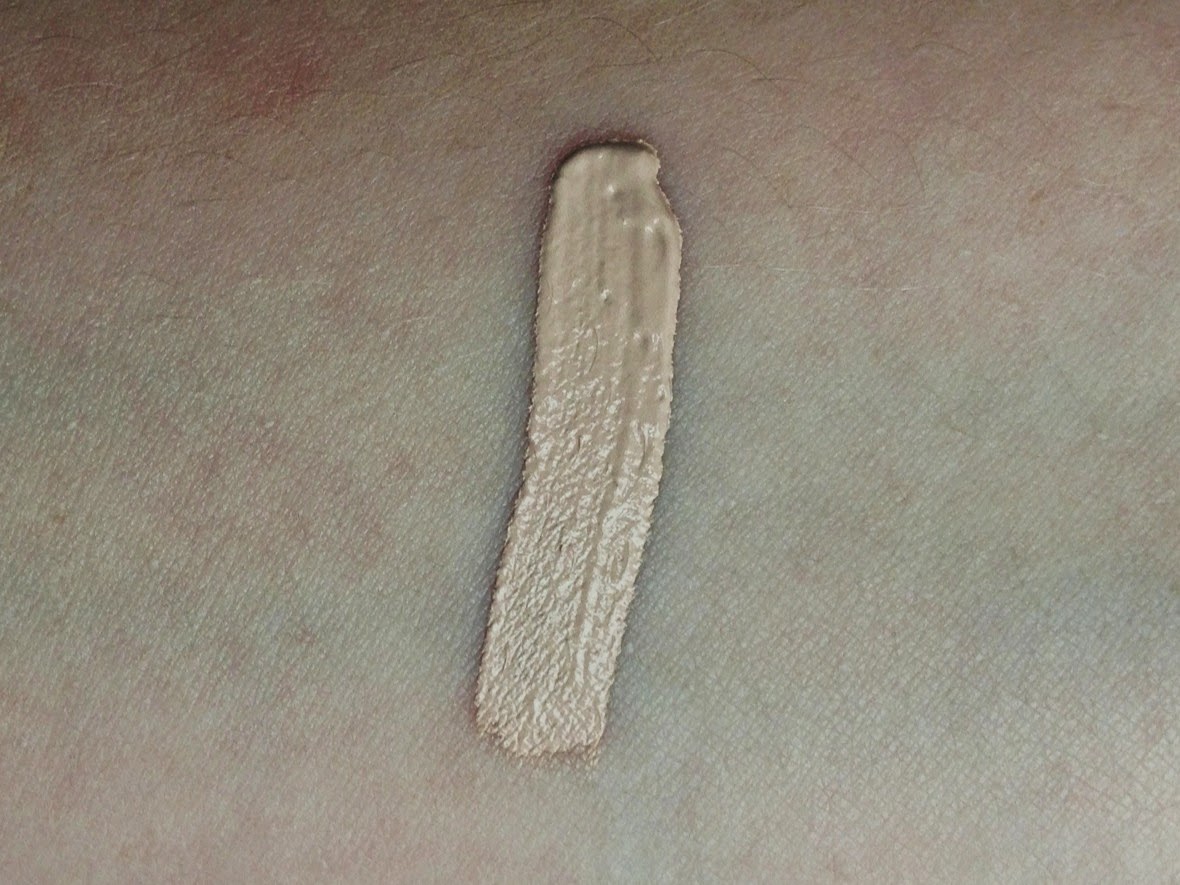 The very lightest color in the range is Chantilly, which is also warmer than pink-tinged Vanilla. I've heard from various sources that pinkish concealers are more effective than yellowish ones on red-purple undereye circles, so it's no wonder that Vanilla works so well for that purpose. I've also tried Vanilla for spot concealing, but have been less impressed. It's a little too dark to match the rest of my face, and I suspect that Chantilly would work better. Luckily my CoverGirl concealer is very similar to Chantilly, so I won't be getting rid of it quite yet!

The Radiant Creamy Concealer (which I always want to abbreviate as "RCC," before I remember that that's the accepted acronym for "Roman Catholic Church") is pigmented and almost entirely opaque. My CoverGirl Perfect Complexion looks like watered-down milk next to it. You can also see the difference in undertones--NARS on the left, CoverGirl on the right: 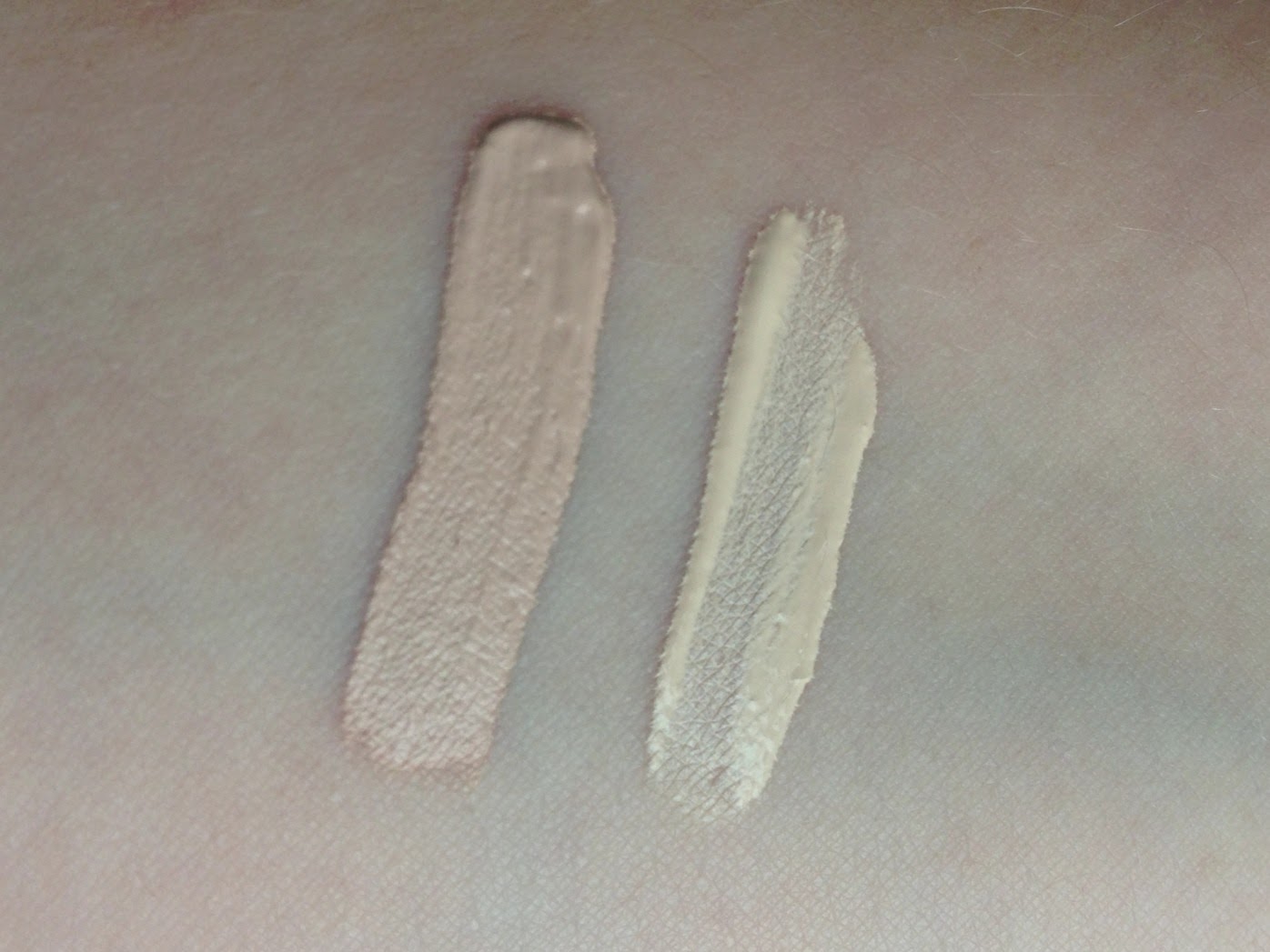 Because the NARS is so much more pigmented than the CoverGirl, I tend to use too much of it, which can make my undereye area look cakey and powdery. I have to keep reminding myself to use less product than I'm accustomed to and apply it in thin layers. Dotted on and blended in, Vanilla melds seamlessly with my skin. Despite the epithet "radiant," I'd say that the formula dries semi-matte; "radiant" implies "glowing" to me. Not necessarily a problem, but something to keep in mind.

I mentioned that Vanilla's color makes it less than ideal for spot concealing, but I think the opacity of the formula works against it, too. I find it difficult to blend the product into such a tiny area of skin: no matter how little I use, it always feels like too much. As for my undereye area, my ring finger seems to work perfectly well for blending. The saleslady at Sephora used both a brush and her fingers to blend the concealer, and I almost dropped $20 on the Sephora-brand brush she'd used, but I decided against it. So far, I don't regret that decision. Mo' brushes, mo' problems.

There's no better way to explain a concealer's effectiveness than with photos. Even I can admit that. Note that I don't wear foundation or tinted moisturizer, so I'm applying the concealer over bare skin; you might get a different effect if you wear base makeup under your concealer.

No concealer under the left eye (my right, your left); Radiant Creamy Concealer on the right. 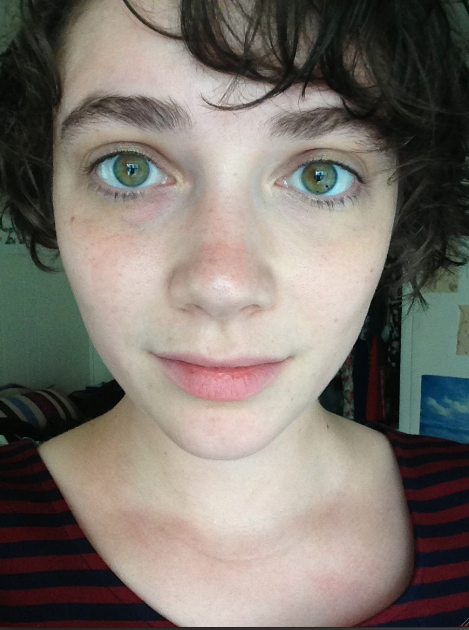 Full-face side-by-side comparison (click to enlarge). No concealer on the left, RCC under both eyes on the right. 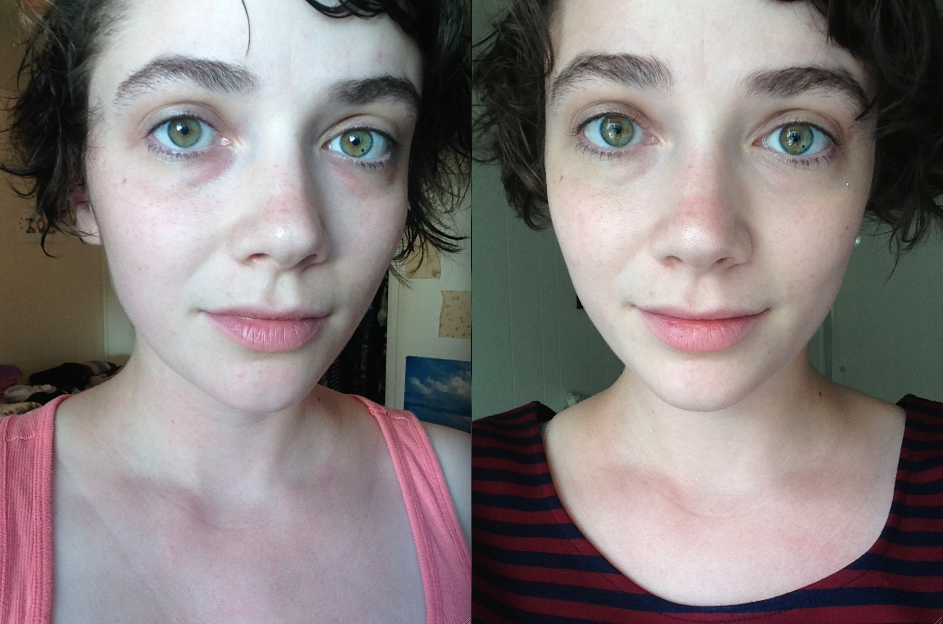 This morning I thought I'd do a little experiment and apply the NARS under one eye and the CoverGirl under the other. First, a terrifying closeup of my eyes with no concealer at all:

CoverGirl on the left, NARS on the right: 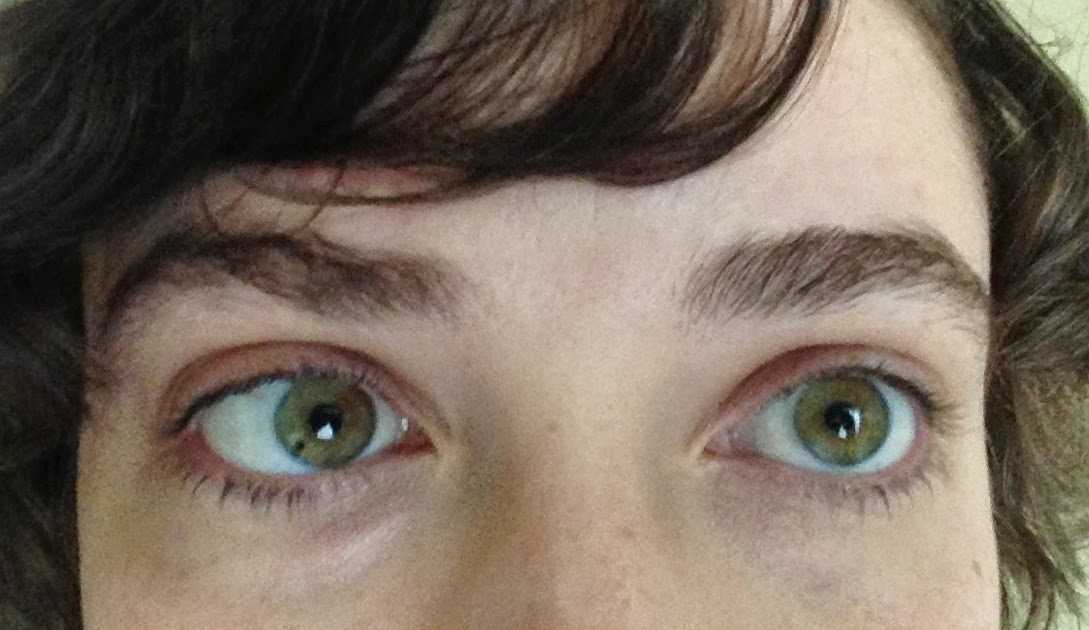 Yeah, that's quite a difference. And the eye on the right is actually the one with the darker circle! This is not to say that the CoverGirl is useless for the undereye area; in fact, I think it has a silkier, more glowing finish. Plus, there are days when I don't want full coverage. But if I want to look more awake with almost no effort, I'm going to reach for NARS.

(I should mention that even when I apply the Radiant Creamy Concealer at full force, my dark circles aren't 100% disguised. This is because I'm not two-dimensional and when the light hits my face, it produces shadows. What the concealer does disguise are the blood vessels under my ultra-thin undereye skin.)

Finally, here's my face with both concealer and color makeup. The lipstick is NYX Alabama, which I can't stop wearing during these cloudy San Francisco days. 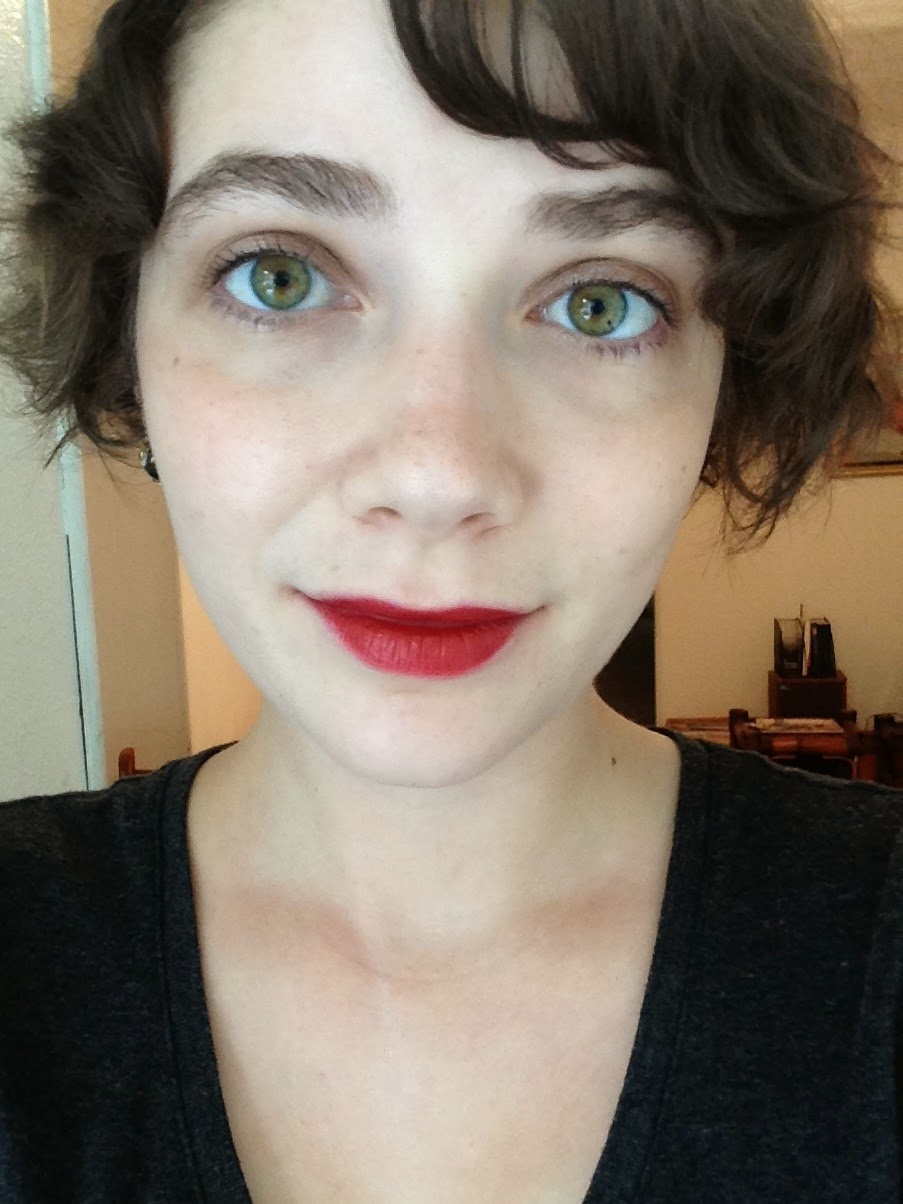 So is NARS Radiant Creamy Concealer as good as everyone claims? For me, for a specific purpose, yes. Granted, I've tried only one other concealer in my life, but that doesn't mean I can't recognize when a product is doing its job. I like Vanilla's opacity and blendability, and when finances permit, I might pick up Chantilly for the rest of my face.

Do you have any experience with the Radiant Creamy Concealer? What's your favorite weapon against undereye circles?
Posted by auxiliary beauty at 1:38 AM