As I've confessed elsewhere, I'm generally reluctant to buy extra tools to make a beauty product work. I delayed buying an eyeshadow primer and lip brush for ages, because "I shouldn't have to." A good eyeshadow or lipstick, I thought, wouldn't need extra help. My stubbornness in this matter has softened since I started this blog, but there was one thing I still refused to buy until last week: a lip liner. This is the inevitable result of reaching pop-cultural awareness in the late '90s, when the de rigueur lip combo was brown liner and lighter brown lipstick. The reign of MAC Spice has long since ended, but my wariness lingered--that is, until I bought & Other Stories Lip Colour in Droguet Purple, reviewed in my last post.

Droguet Purple, a dark blue-based purple lipstick with a shiny finish, presented me with two problems. First, its slippery formula prevented me from getting even coverage on my lips; second, oh god so dark so purple I look crazy how do I wear this without looking crazy. The first problem seemed easier to solve than the second; so, true to form, I tackled it first. (During a dissertation meeting last year, one of my advisers quoted another professor in our department: "All work is the avoidance of other work." That goes for makeup, too.)

What I needed, I decided, was a lip liner in roughly the same color as Droguet Purple. I scoured one Superdrug and two Boots for a dark purple liner, which proved harder to find than I'd anticipated. Finally, at Superdrug, I settled on Barry M Lip Liner #11 (Plum). I usually think of Barry M as a purveyor of cheap nail polish, but the brand makes quite a few lip products as well, including something hailed widely as a dupe for OCC's Lip Tars. The lip liner was £3, and I think it's remarkably attractive for a budget product. Look at that gold flourish! 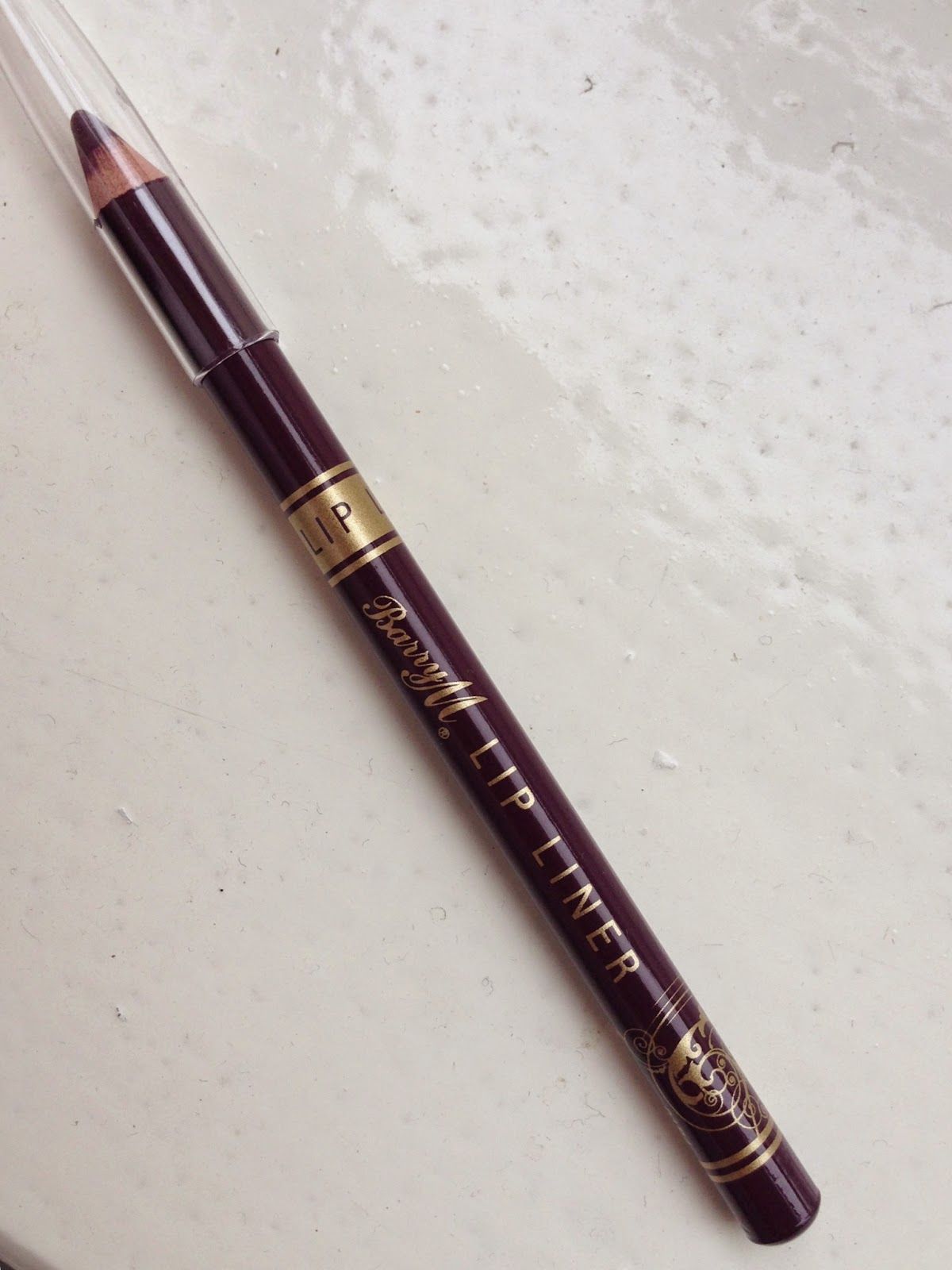 True to its name, Plum is slightly redder than Droguet Purple. Still, it would be hard to find a better match at this price point, considering how many drugstore lip liners fall into the nude-mauve-rose category. Here's an arm swatch of Plum (left) next to Droguet Purple. 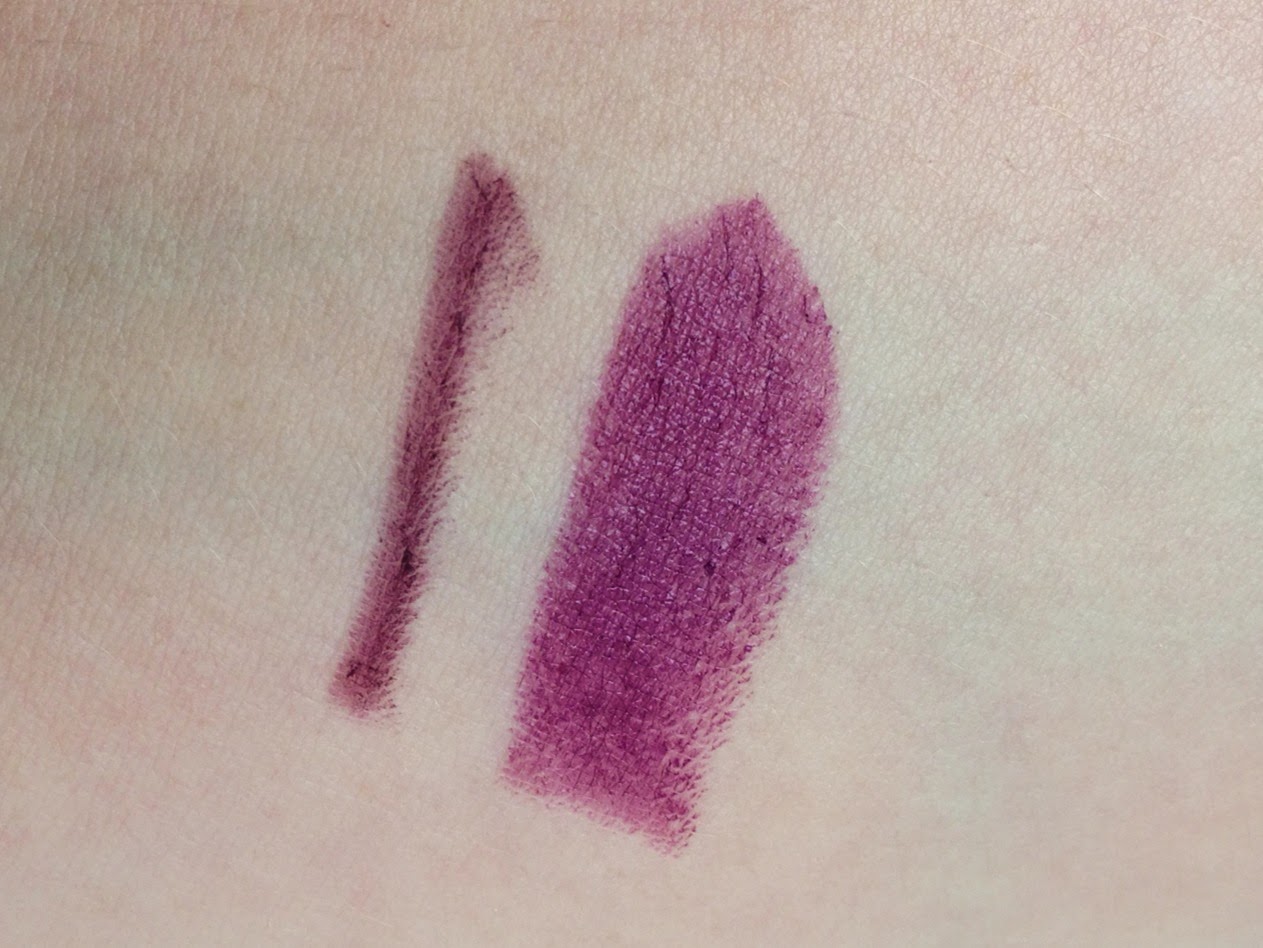 To give Droguet Purple a surface to cling to, I used Plum to outline and color in the entire surface of my lips. Plum is an old-fashioned lip liner, bone-dry and thoroughly matte, and it took a surprisingly long time to cover my lips with pigment. Plus, the liner tasted like a pencil. It tasted like first grade, in fact: I was a big pencil-chewer back in the day. Not exactly a luxury product, but it got the job done. Hey, I look insane! 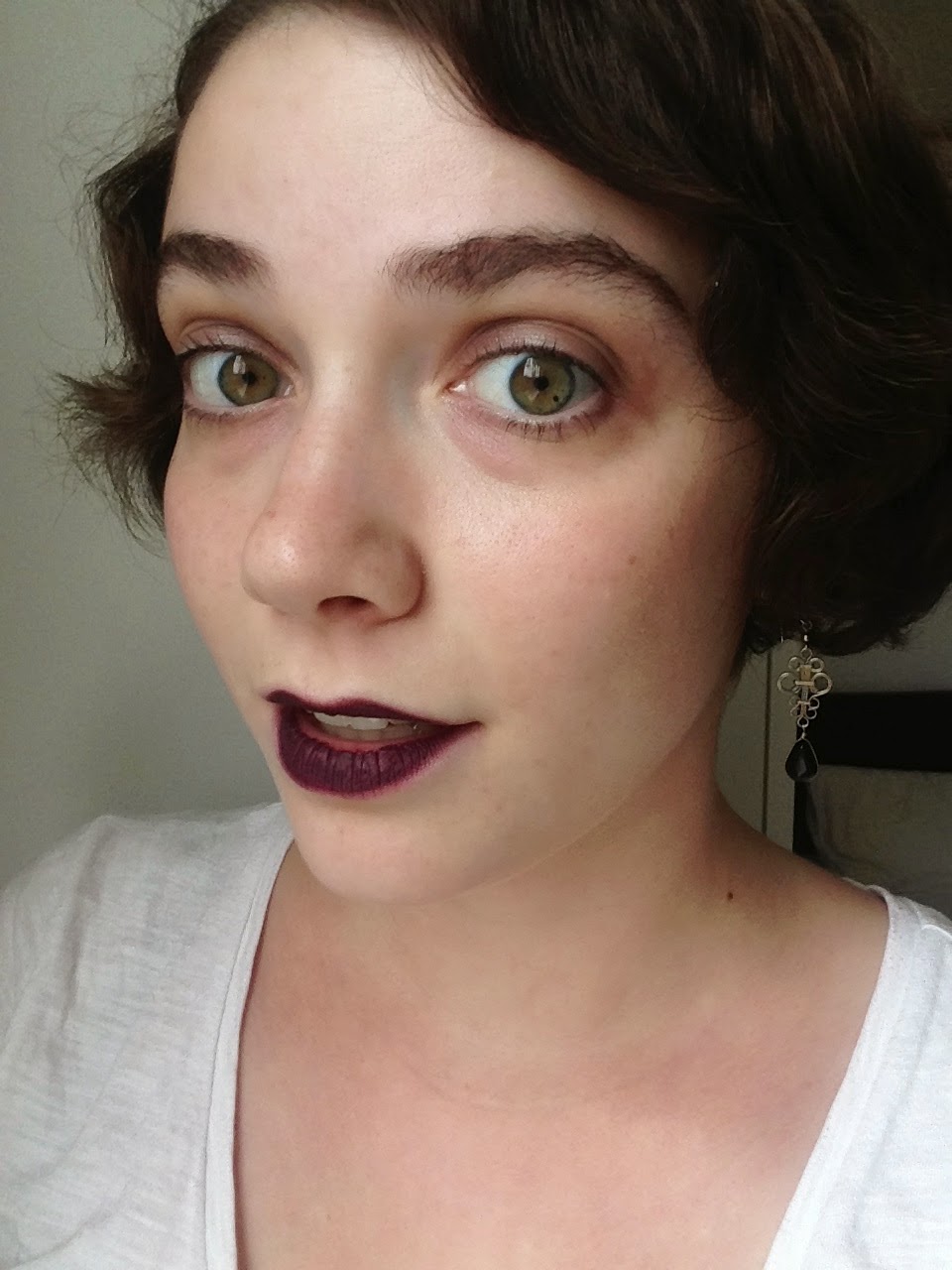 See, this is why I didn't want a matte dark purple; my lips look so much smaller than usual. I've had a slight complex about this ever since someone I dated in college told me I had "thin lips." You don't say that sort of thing to a person, especially one as vain as I am; you just don't.

With a base of Plum, I needed only one coat of Droguet Purple. The liner changed the color of the lipstick, making it more of a blackened eggplant than a vivid blue-purple. Left, Droguet Purple without lip liner; right, layered over Plum. See how much more even the color looks? 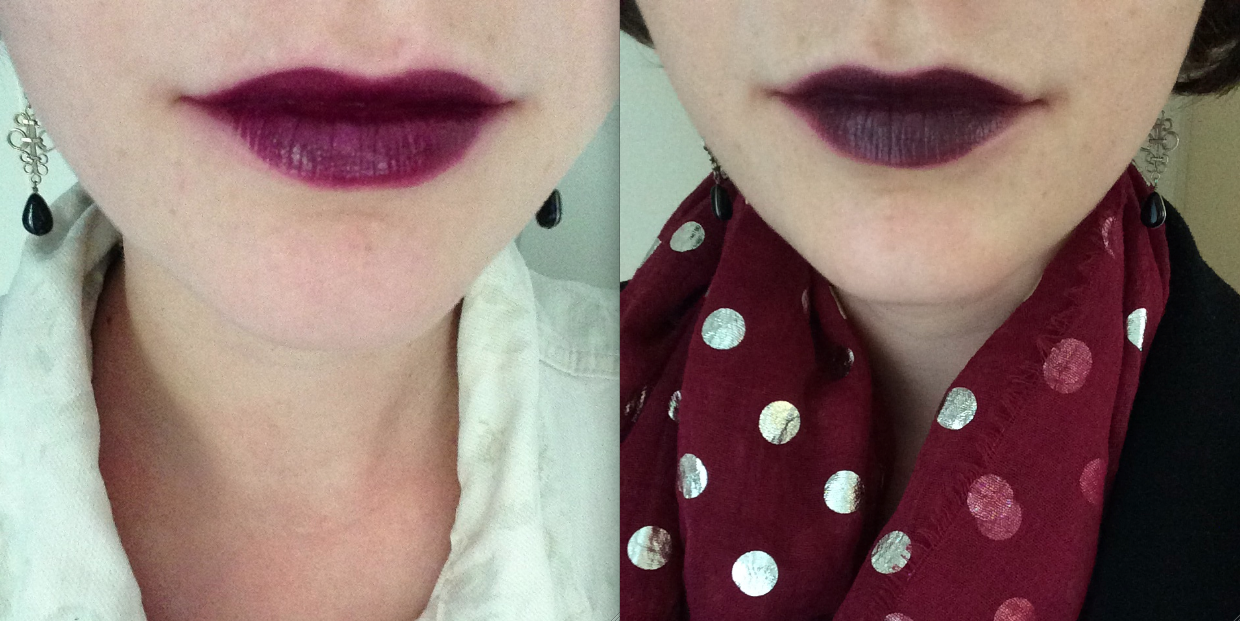 Since buying Plum, I've worn Droguet Purple twice in public, with two different eye/cheek situations: one for night and one for day. I confess that there's not a tremendous difference between the two. No matter what you use to complement a lipstick this dark, your mouth will always be the star of the show.

For my first attempt, I took Belly's advice to add "something blackened and intense on your eyes." Real smoky eyes are still difficult for me (I have a lot of eyelid real estate to cover, and the extra fold in each lid makes it hard to get even color distribution), so I kept it simple with a base of NARS Lhasa and a smudgy overlay of Serious, the matte black shadow from theBalm's Nude 'tude palette. Serious layers beautifully; you can wear it semi-opaque or build it up to full opacity (none more black!). My models for this look were Edward Gorey's Interbellum-inspired illustrations of murderous vamps and recently deflowered girls. 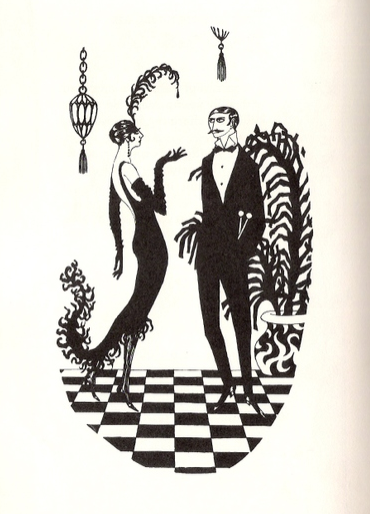 I added Serious to the outer halves of my upper lids, blended an extra layer into the outer corners, and used my e.l.f. eyeliner brush to smudge Serious onto my lower lashlines. For blush, I swapped out Zygomatic for Sleek Flushed, a red-plum powder blush. I also added my new magenta scarf, purchased on Portobello Road on Thursday, so that the combination of black blazer and eggplant lips wouldn't wash me out. Other, less apparent, products: NARS Radiant Creamy Concealer in Vanilla, Maybelline One by One Mascara, theBalm Sleek eyeshadow to define brows. 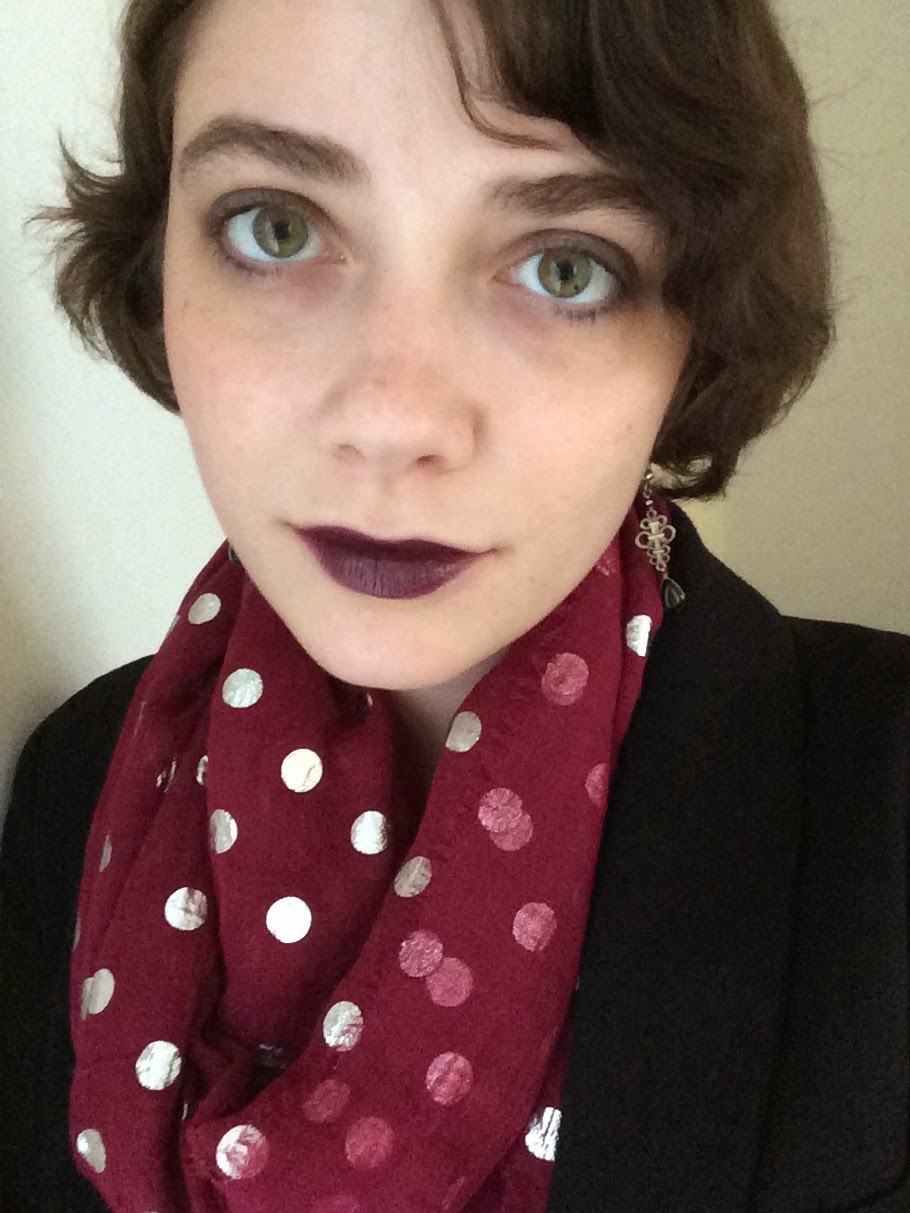 A better view of the eyes: 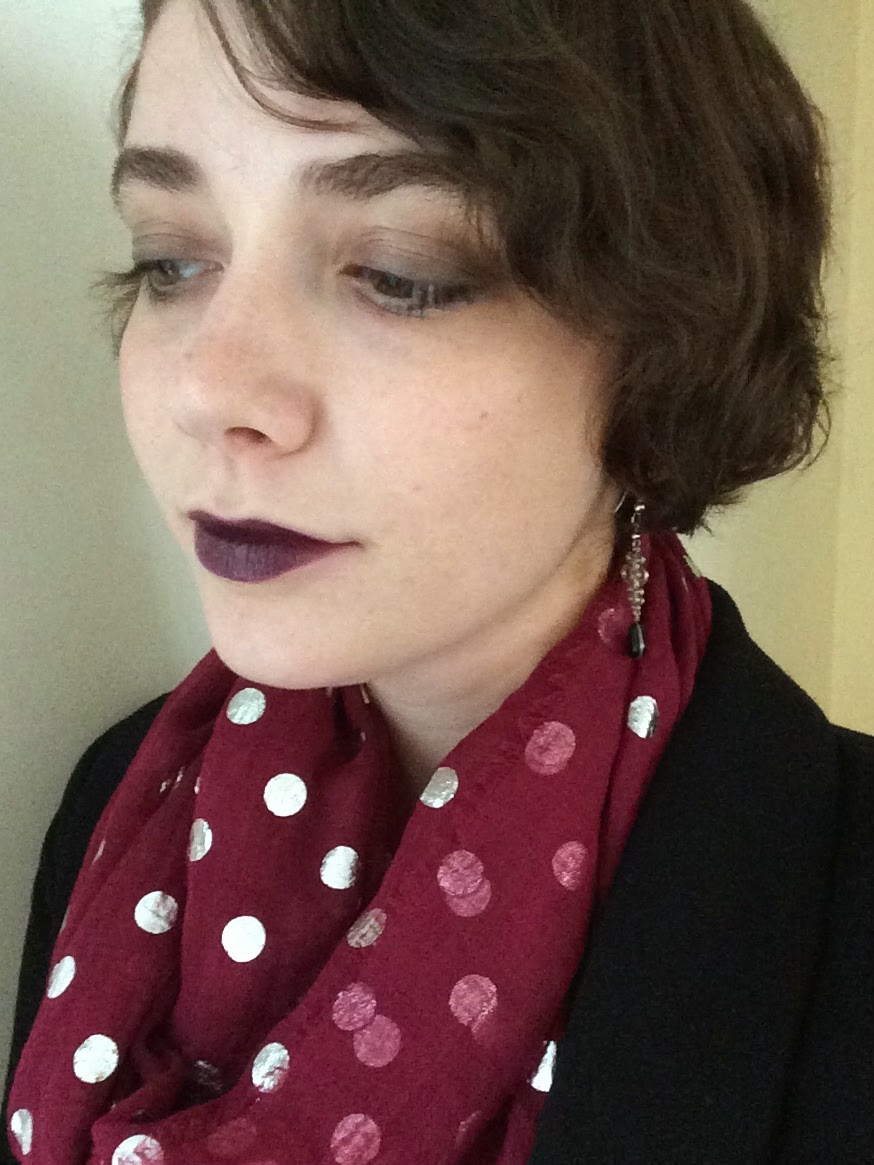 My second attempt, from today, involved warmer tones. Larie had suggested that I try bronzer with this lipstick; since I don't own any bronzer, I did the next best thing and used bronze eyeshadow! I applied Maybelline Color Tattoo in Bad to the Bronze to my mobile lids and part of my browbones, lined my upper and lower lashlines with theBalm eyeshadow in Silly (warm brown with copper glitter), and used Illamasqua Zygomatic on my cheeks. The idea was to create a more casual look, though I'm not sure this lipstick is capable of conveying "casual."  I'm fine with that. Apologies for the washed-out photo--the watery English light just wouldn't cooperate with my vanity. The eye makeup was more pronounced IRL. 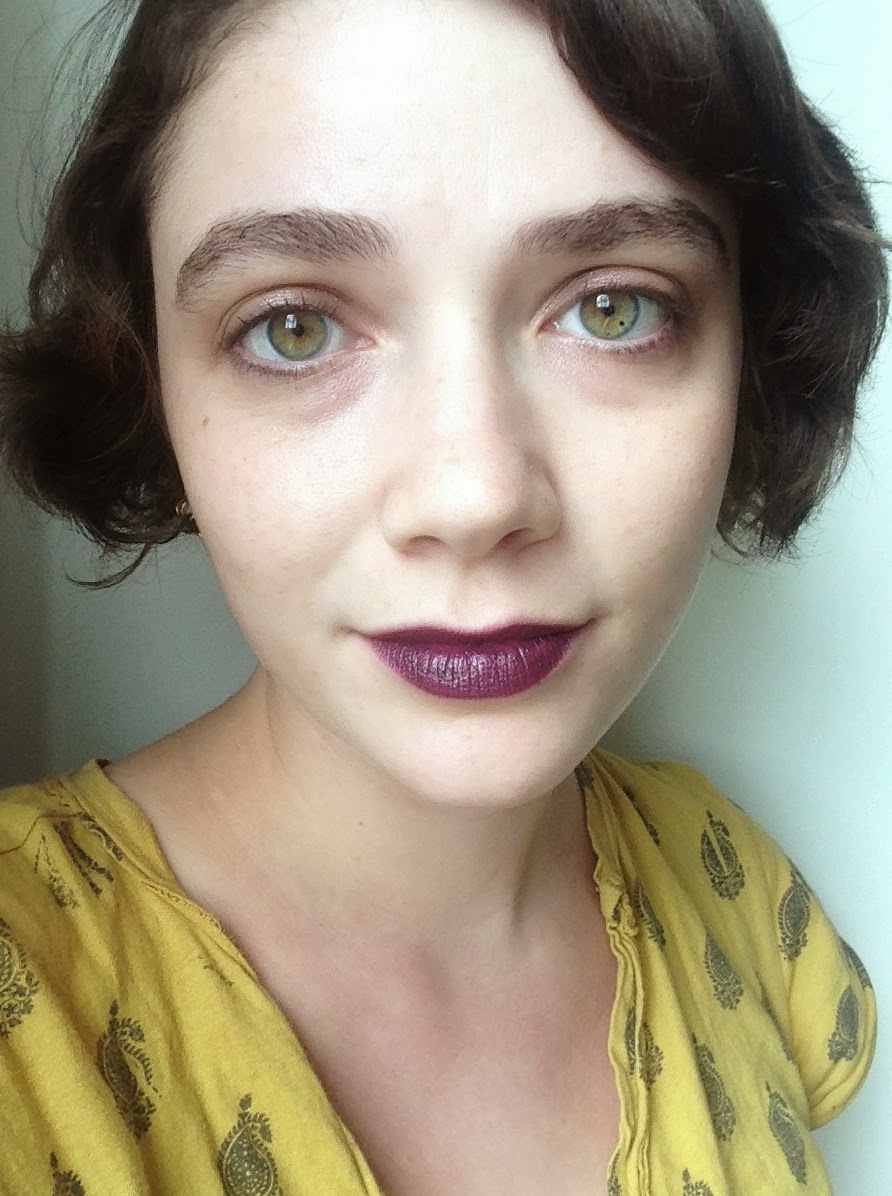 I wore this look on a tour of Aston Hall, a stunning 17th-century mansion outside Birmingham. Built between 1618 and 1635 for a man who had bought a baronetcy from the cash-strapped James I, the house is a beautifully preserved example of Jacobean architecture. It's also a nice background for awkward tourist photos... 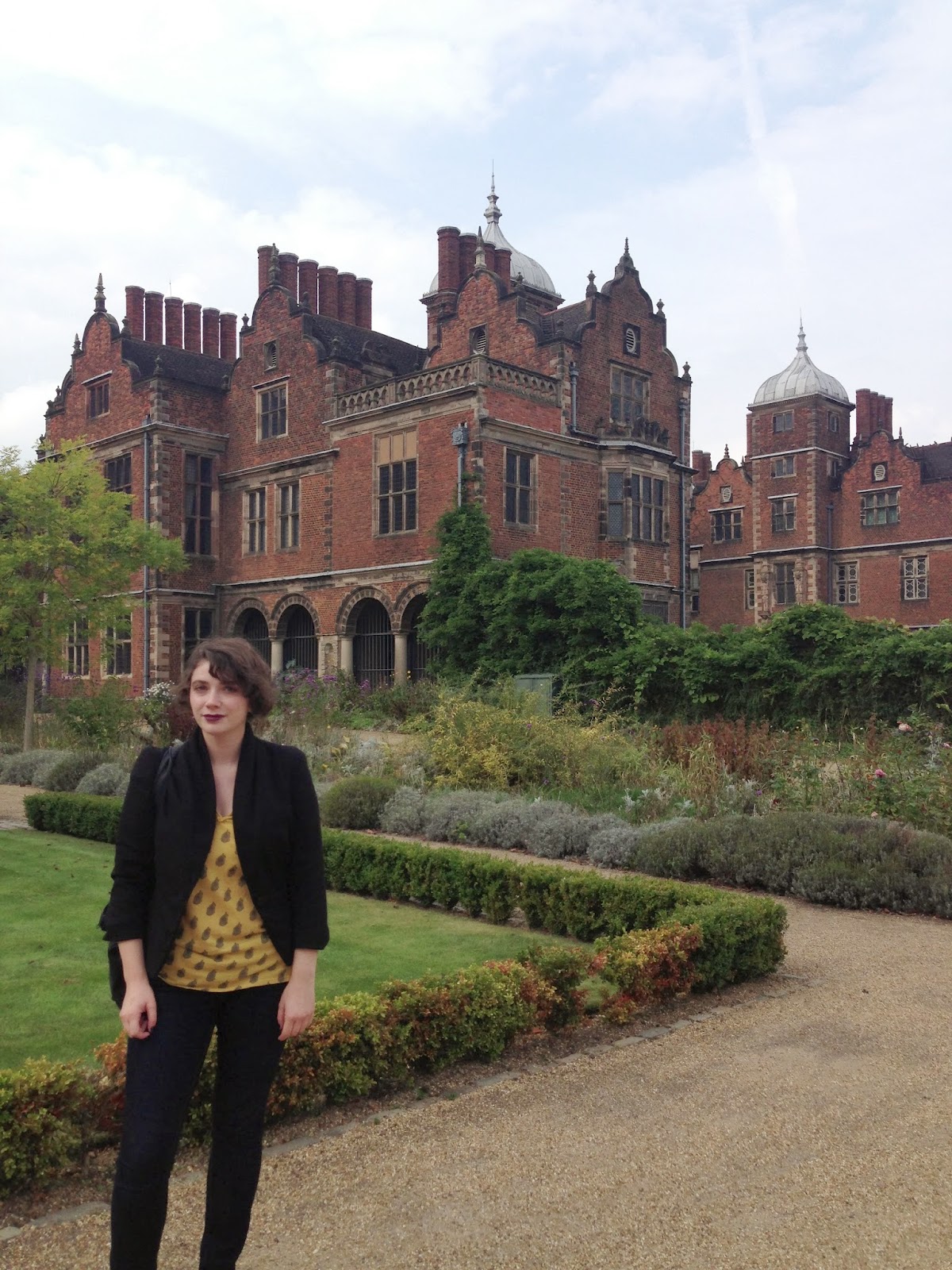 The lipstick/liner combo lasted for a couple of hours before it began to fade. Droguet Purple is just not a low-maintenance color, and it's going to come off on coffee cups and surrender entirely to apples or sandwiches. Frankly, I don't mind. There's a lot of emphasis placed on effortless, low-maintenance makeup these days, and I think it's no coincidence that women themselves often feel pressured to be socially and emotionally low-maintenance. Sometimes I want to wear a lipstick that attests to the amount of effort I put into it. Sprezzatura is overrated.
Posted by auxiliary beauty at 1:15 PM