BABY, ALL I WANT
IS TO LET IT GO
AIN'T NO WORRIES, NO
WE CAN DANCE ALL NIGHT...

Ahem. On my previous trip to the UK, I limited my Topshop damage to two nail polishes and an eyeshadow. This time I was eager to try one of Topshop's many lip products, and I settled on the Matte Lip Bullet in Get Me Bodied (£8), a dark magenta-plum. 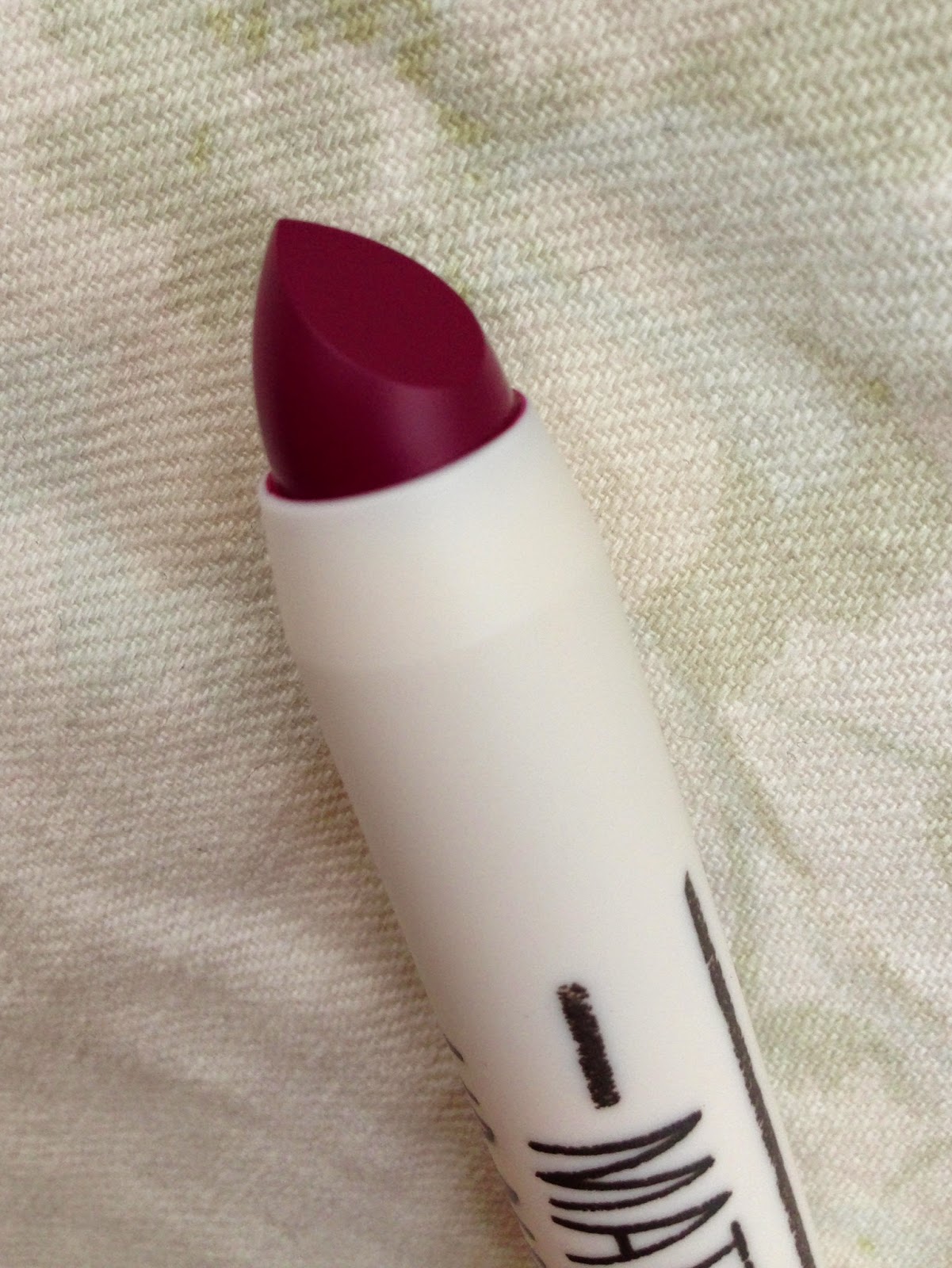 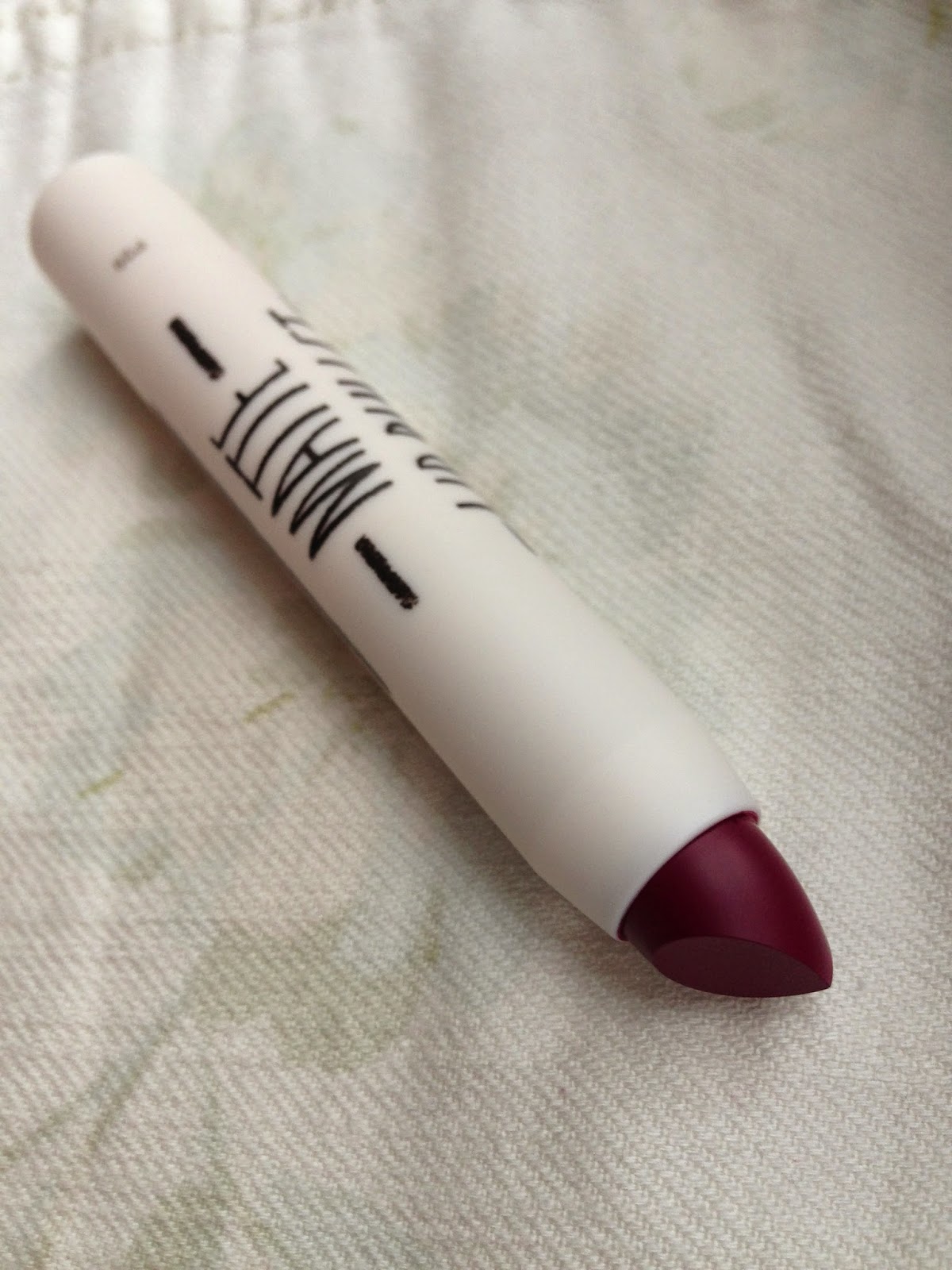 Topshop's Lip Bullets are thin twist-up lipsticks in matte black-and-white tubes with clear plastic caps. The white plastic looks sleek when new, but it can easily get messy if you remove or replace the cap too hastily. The testers in the Topshop store looked downright gory. 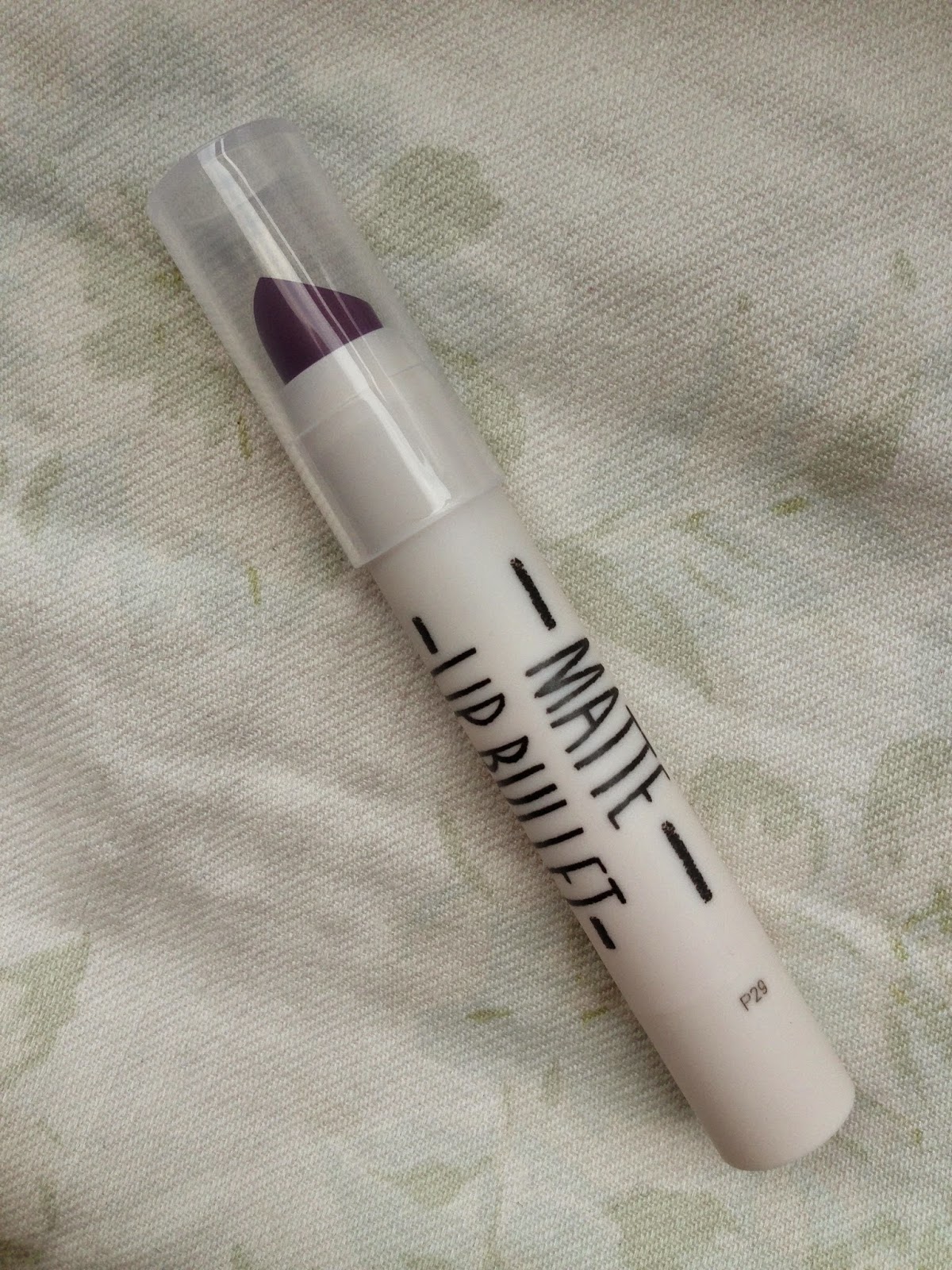 The Lip Bullets come in two finishes, satin and matte; slapdash Google research indicates that the satin bullets came out last year and the matte ones this summer. They’re not crayons, exactly, because the bullet has the slanted head of a traditional lipstick—and because Topshop has wasted no time in capitalizing on the lip-crayon trend with its own line of crayons, which I'm sure are totally different from the bullets. I swatched a few satin-finish Lip Bullets alongside Get Me Bodied, and they felt slippery and moisturizing; the darkest one, burgundy Wine Gum, applied a bit unevenly.  But Get Me Bodied was perfectly even and opaque with one swipe, so it came home with me. (I should note that although lip products were two for £12 at Topshop, I resisted buying a second. I'm prouder of this than I should be.) 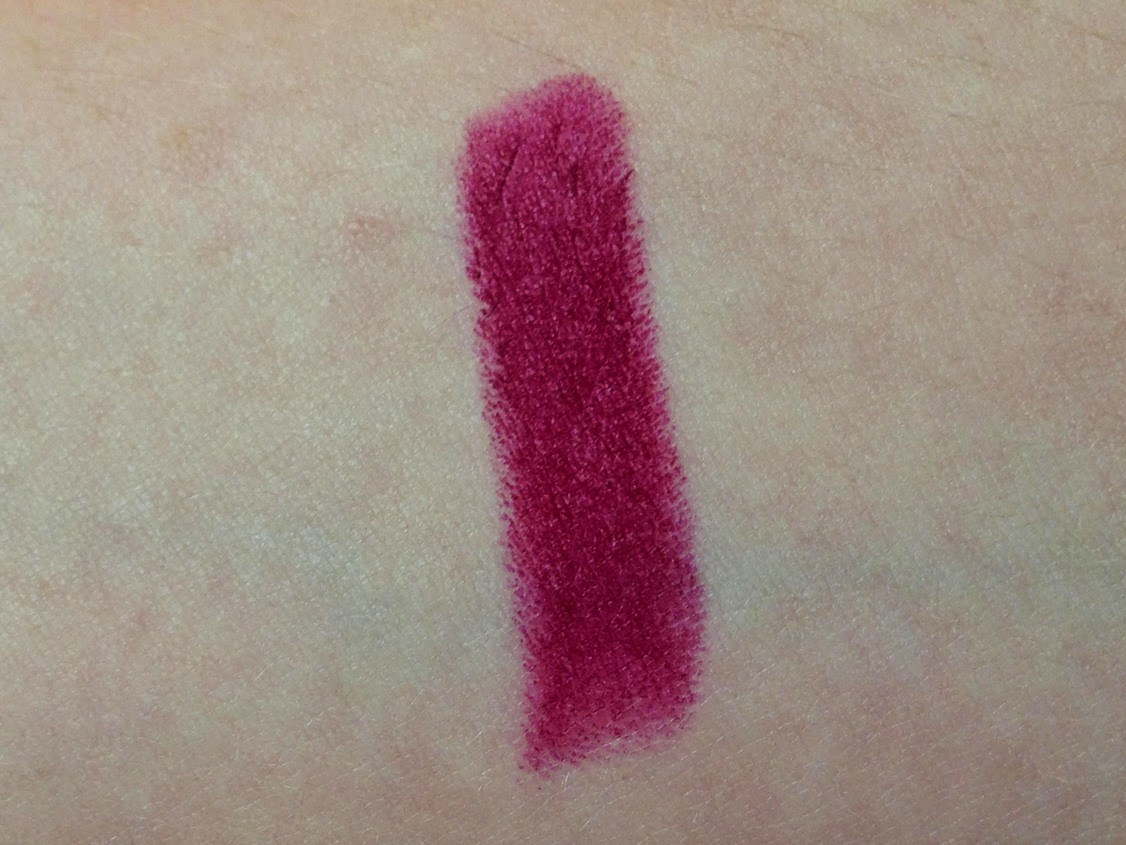 Get Me Bodied has a modern matte finish, softer and more luminous than, say, the NYX matte lipsticks. It glides on smoothly and wears off evenly; it also stands up remarkably well to food and drink. I don't find it unusually drying, but I do like to wear it over a thin layer of balm for added comfort. I've included two lip swatches because the color likes to shift from bright pinky-purple plum to muted reddish plum, depending on the light. The first photo was taken outside, the second in evening light indoors.

Now I'm going to level with you: I have several lipsticks that are very similar to Get Me Bodied. It's embarrassing. If I ever mention wanting another lipstick that can be described as "plum" or "dark fuchsia," please slap some sense into me. Left to right: Revlon Black Cherry, YSL Belle de Rose, Topshop Get Me Bodied, Milani Sangria, Revlon Plum Velour, & Other Stories Droguet Purple. 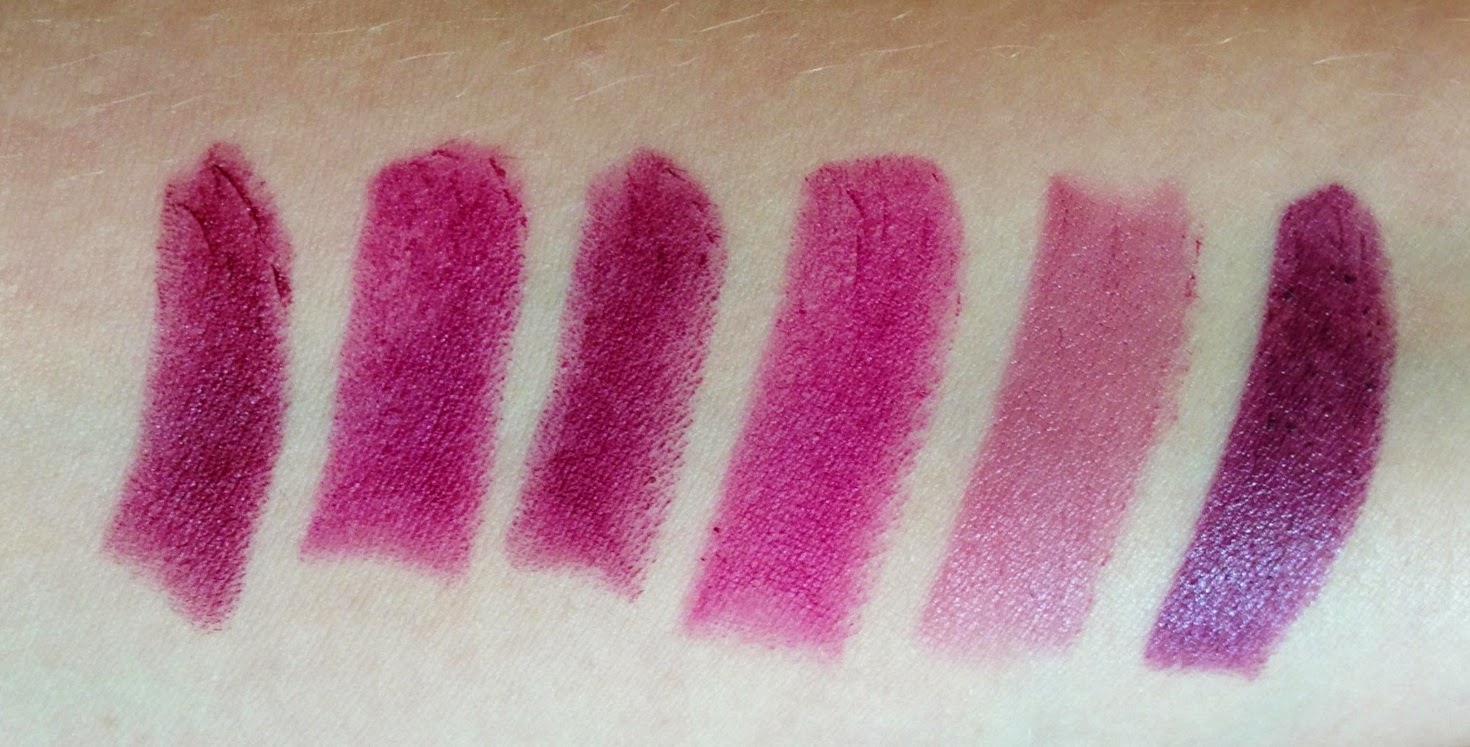 The closest matches are Black Cherry (slightly darker) and Belle de Rose (slightly lighter), though neither one is matte and Black Cherry, despite its cult status, has a criminally patchy formula. I was planning to get rid of it, but now I'm curious to see how it works over Barry M Plum liner...

I've been wearing Get Me Bodied constantly since I bought it, including on my transatlantic flight on Thursday. (AB's Law: if you try to apply a bold lipstick in an airplane lavatory, the plane is guaranteed to hit a patch of turbulence the second you touch bullet to lip.) I usually pair this color with a boring taupe eye, but today I decided to add a bit more color. I'm wearing Milani Bella Taupe all over my lids and smudged on the lower lashlines, and the mint shade from the NARS Habanera duo blended into the inner third of each lid. Blush is Illamasqua Zygomatic; mascara is CoverGirl LashBlast Length. 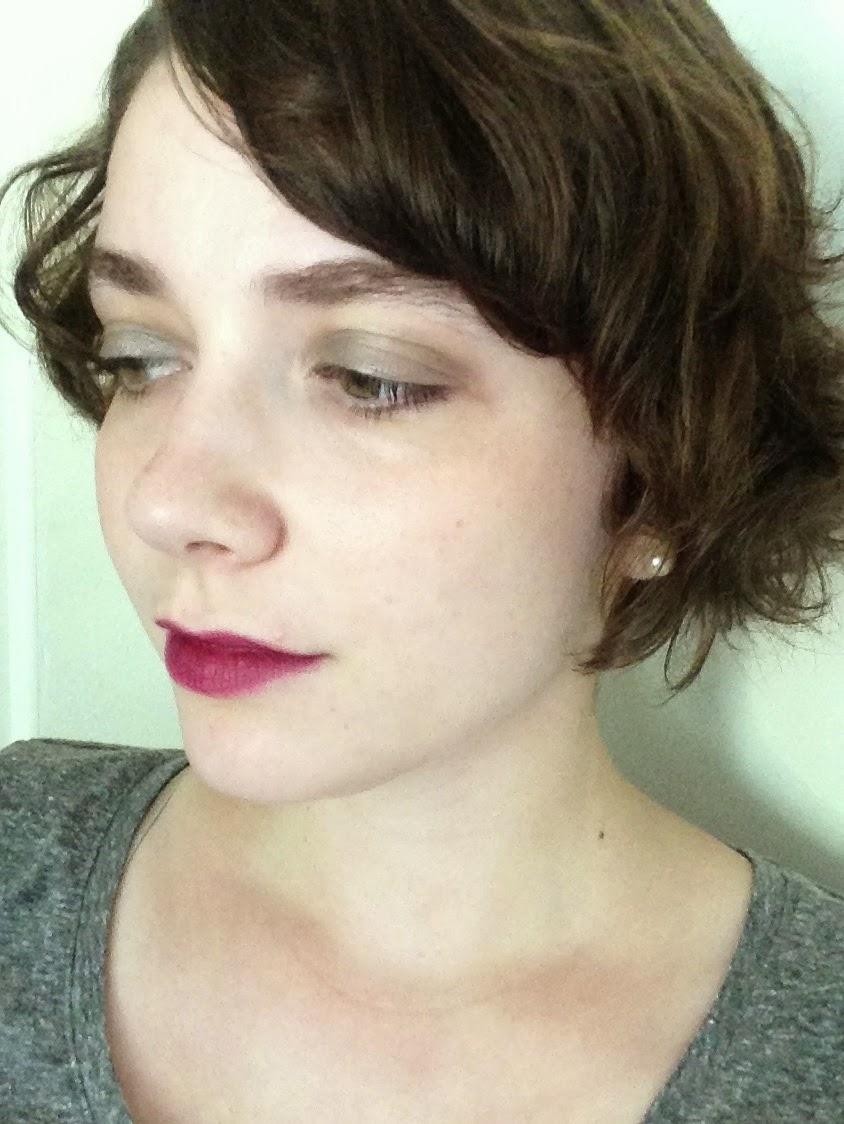 I discovered the pairing of plumberry lip and mint eye by accident, when I tried on NARS Audrey in a store while wearing Habanera. I should have thought of it before that, since Habanera is a duo composed of plum and mint, but hey. The mint half of Habanera has surprised me over and over with its versatility. It can hold its own against almost any color of lipstick, but it also blends easily into neutral shadows for an understated icy sheen. 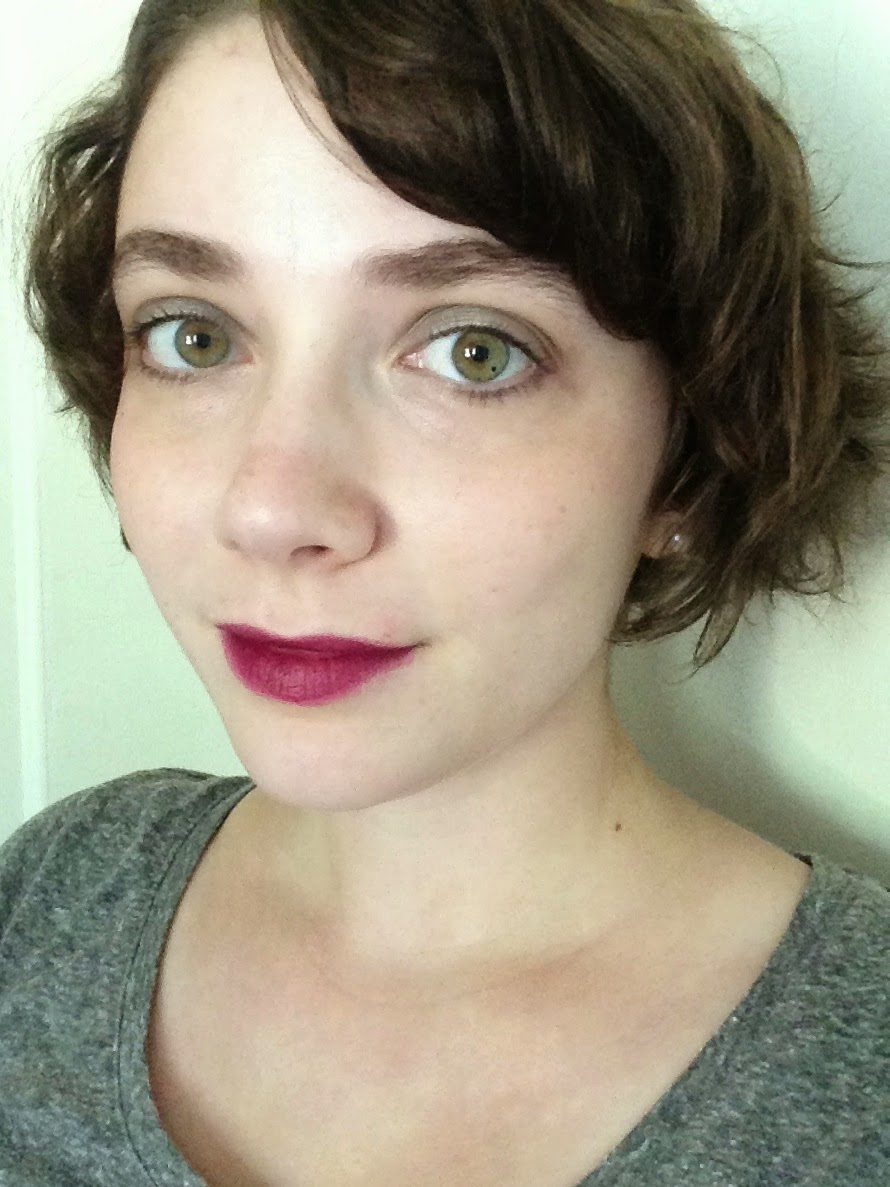 All the Matte Lip Bullets seem to be named after pop songs ("Call Me Queen Bee" is lavender, which strikes me as a bit delicate for Lorde). The phrase "get me bodied" didn't ring a bell for me when I saw it in the store, but a quick Google that evening revealed it to be the title of a Beyoncé track from 2006. Back then, the most cutting-edge music I listened to was Simon and Garfunkel, so it's no wonder I first heard this song eight years later. I found it intensely annoying on first listen, but decided to give it another chance before this post went up. Approximately fifty plays later, I'm ready to recant. Thank you, Topshop, for introducing me to my next earworm/pre-conference motivational song. I'm not convinced that a matte plum lipstick is the best color to wear to "get bodied," i.e. pick up dudes at the club--but that's on Topshop, not Beyoncé. Beyoncé knows what's up.

Posted by auxiliary beauty at 8:06 PM