Convicted, rather, of truly painful punning. Sometimes I just can't help it.

Welcome to my very first purge post! It will probably also be my last in a while, since it saddens me so much to throw anything out. I'm both a sentimental hoarder and an incorrigible cheapskate--a deadly combination where makeup collecting is concerned. But after I came home from England last week, I embarked on a massive apartment-cleaning project, in the course of which I managed to fill a bag with makeup I should have thrown out long ago... 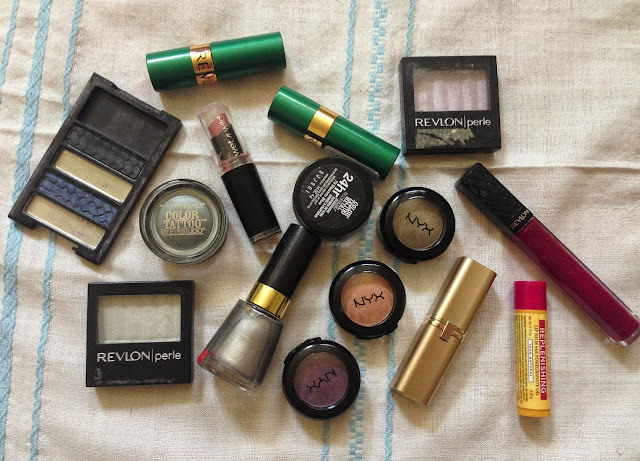 The condemned, in more or less chronological order: 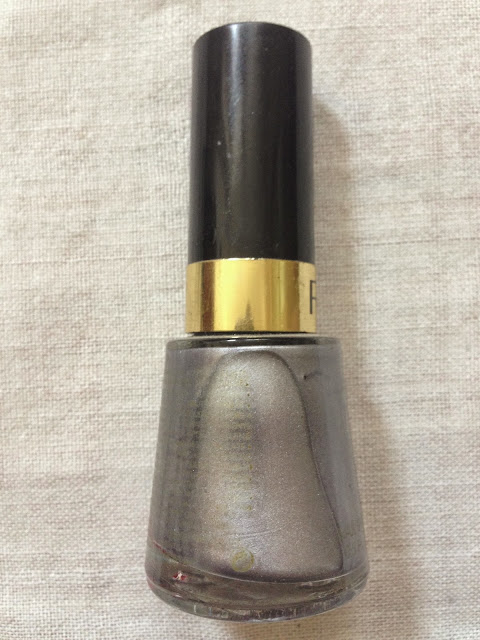 Crime: I haven't used Silver Screen in about four years, though it was the first nail polish I really coveted, which gives it a special place in my heart. Throughout college, the idea of wearing nail polish made me uncomfortable. I didn't want to seem frivolous or childish (I was a Serious Intellectual, dontchaknow), and I also had a bizarre fear of drawing people's attention to my hands. I've spent the past two minutes trying to articulate the origin and nature of that fear, but it turns out that I can't. Anyway, in my first semester of graduate school, a girl in one of my classes had amazing silver robot nails. It occurred to me one day that I could have silver robot nails, too. I believe I initially bought another brand of silver polish, but I soon upgraded to Revlon. Eventually I realized that silver robot nails weren't really my style, but I kept the bottle of polish for sentiment's sake...and now I don't want to purge it after all. Damn it!

Replacement: None, though I'm reminded that I should wear Essie Good as Gold more often. Gold robot nails are slightly more my speed. 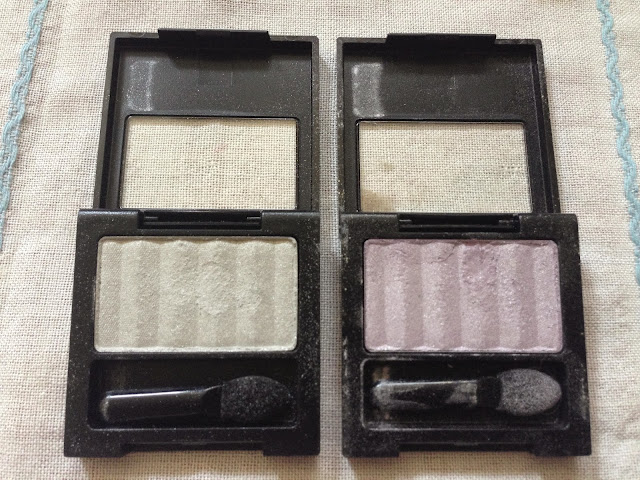 Date of purchase: I don't even remember, which is a bad sign. Sometime in 2011?

Crimes: Coarse texture, meh colors, general mediocrity. I'm not sure I've ever actually worn either of these, but here they are swatched on my arm. Glistening Snow is on the left and Lilac Shimmer on the right, not that it makes much difference--as you can see, they're almost identical. 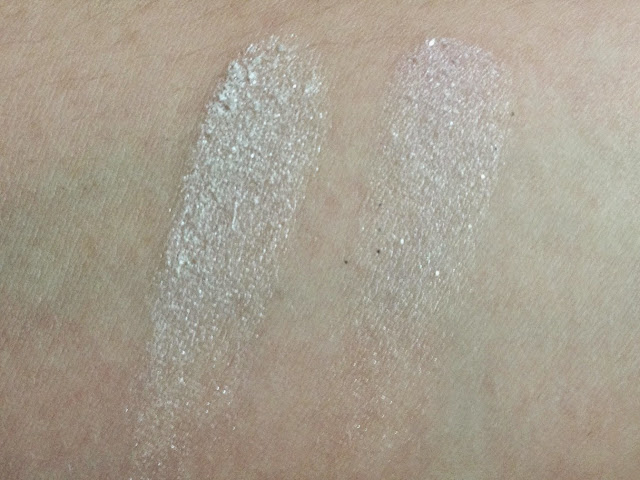 Replacements: Kiko 251 for Lilac Shimmer. No replacement for Glistening Snow, because I don't really need a '90s-esque white frost with huge glitter particles. 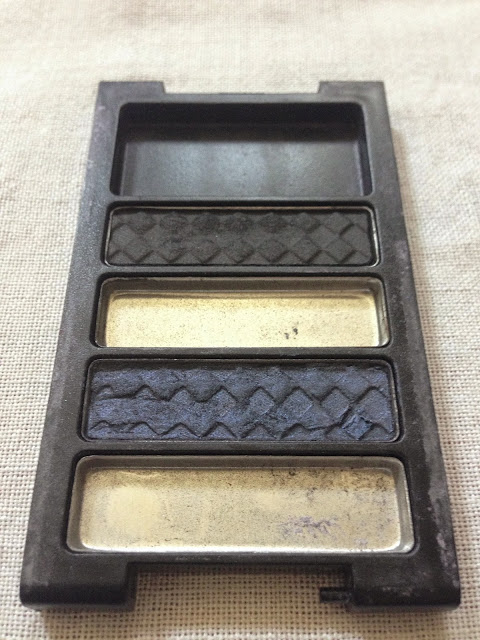 Crimes: It's pretty obvious, isn't it? My favorite shade in the palette, a shimmery gunmetal gray, crumbled and died long ago, leaving me with three colors I didn't really care for. (The second missing color was yet another lavender frost.) Then the lid fell off. Then I kept the palette for two more years, because I'm insane.

Replacements: Milani Bella Charcoal for the gray shimmer, despite its traitorous crumbling. 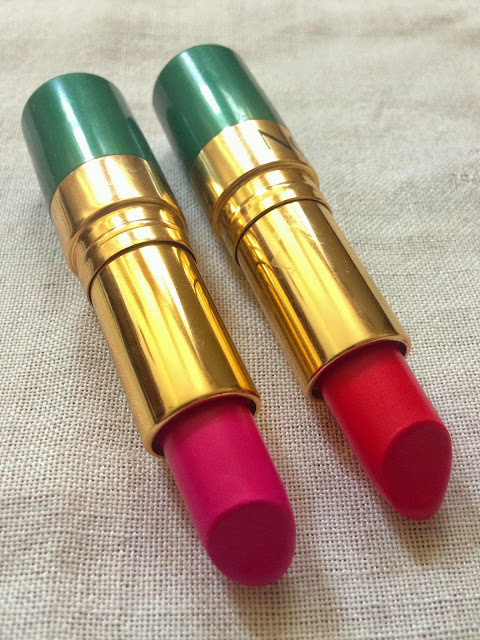 Crimes: Advanced age, colors I'm not crazy about, headache-inducing floral smell that has only worsened with time. It saddens me to get rid of these, because I remember the thrill of buying them one bright spring afternoon early in my makeup-collecting life, but I don't think I've worn either of them in over two years.

Replacements: Wet n Wild Purty Persimmon is a similar color to Orange Flip, though more matte. No replacement for Persian Melon, since I've figured out that this particular shade of hot pink is not my color. 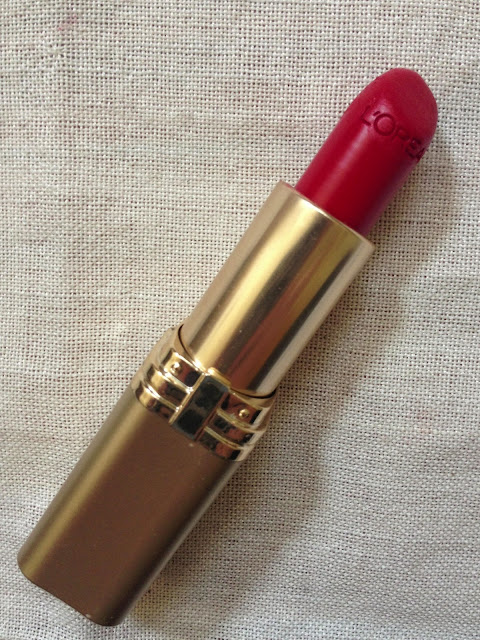 Crime: Putrid L'Oreal smell. I can put up with most lipstick smells, but L'Oreal is beyond the pale for me. I also find the formula somewhat drying. I feel guilty getting rid of this one--it was a gift from my mother, a longtime L'Oreal devotee--but I just can't wear it.

Replacements: I don't often reach for satin-finish blue-reds (they seem more ~sexy than matte blue-reds, and it's rare that I aim to look ~sexy), but I do like wearing Maybelline On Fire Red now and then. 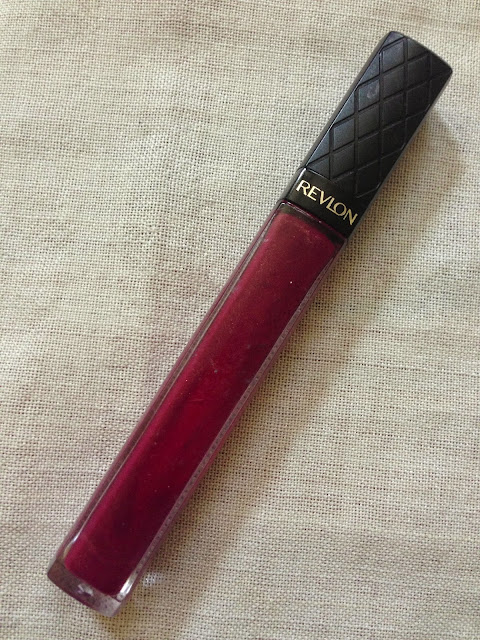 Crime: Tragic expiration. I opened the tube a few days ago, and found that the gloss smelled off and the pigment had separated from the rest of the formula. Bordeaux est mort. Vive...

Replacement: Revlon Super Lustrous Lip Gloss in Embellished, which I bought during Ulta's sale on NYX and Revlon yesterday. Bordeaux wasn't available at Ulta, but Embellished looked similar, though a bit more purple. I bought six items in total; expect reviews when the package arrives! 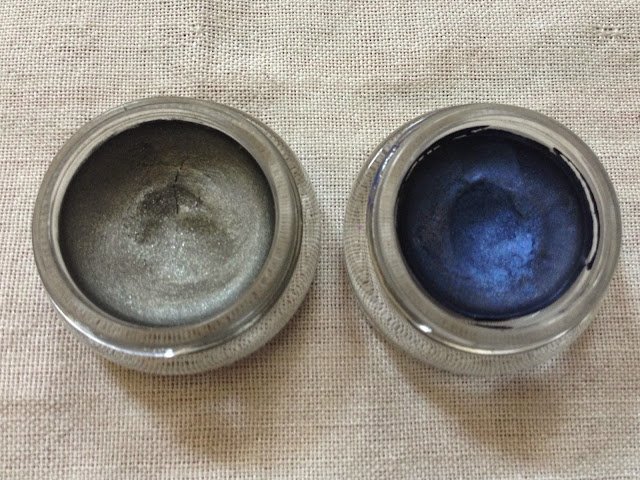 Crime: Excessive dryness. Audacious Asphalt was almost unusable when I first got it (I have no idea why I didn't return it), and now it's so dry that it's even developed a crack. Electric Blue has always been difficult to apply and blend, which is especially unforgivable in an eyeshadow this bold.

8. Wet n Wild Megalast Lipstick in Bare It All 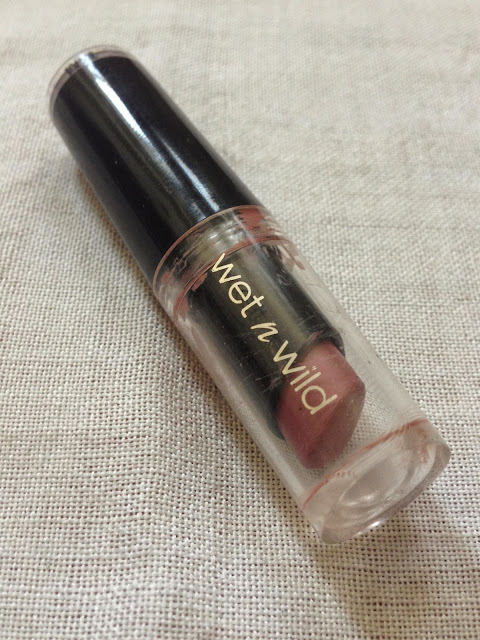 Crime: Ugliness, at least on me. I thought this would be a nice pinky-brown MLBB color, but it has a strong orangey undertone that doesn't play well with my complexion. Then there's the smell, simultaneously musty and metallic, and the thick, dry texture. My other two Wet n Wild lipsticks have perfect formulas, so I don't know why Bare It All is so unpleasant. 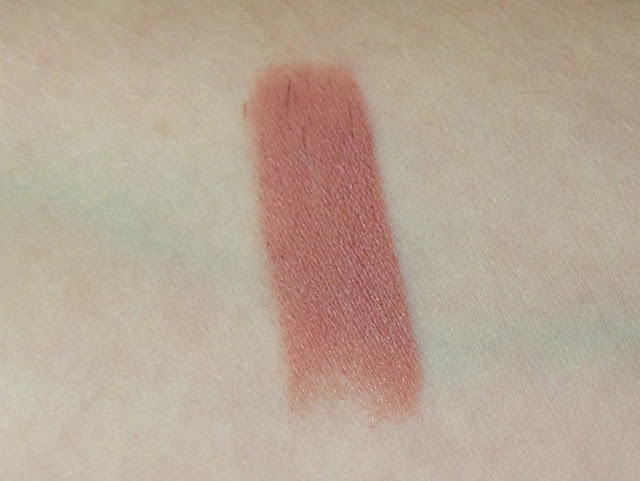 In my defense, I bought this while drunk. Bless American drugstores for staying open late enough to enable tequila-fueled lipstick purchases. It was the day of the first meeting of my dissertation seminar in Washington, DC, and because nerds who have just met each other can't converse normally without the help of alcohol, we'd all had a few. On our way back from a Salvadorean restaurant where we had capped the evening with an ill-advised margarita pitcher, we stopped into the CVS near Eastern Market so someone could pick up tampons. I took this as a sign from Party God that I should buy not one but two lipsticks. (The other one, Wet n Wild Stoplight Red, was a much better choice. I wore it to a Janelle Monáe concert last October!) 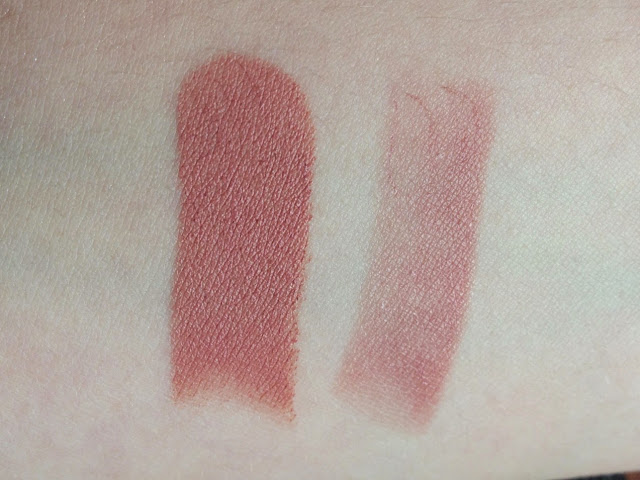 9. NYX Hot Singles Eyeshadows in Burlesque, Dayclub, and After Party 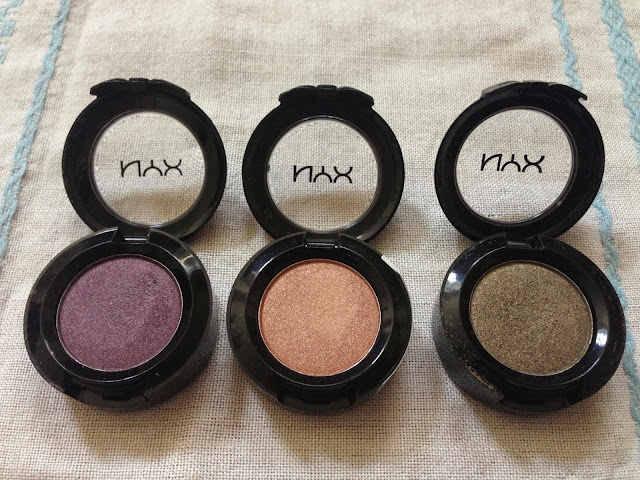 Crime: Utter shittiness. I've said it before: these are some of the worst eyeshadows I've ever tried. Coarsely milled, poorly pigmented even over primer, just terrible in every way. I was an idiot not to keep the receipt, but here we are. 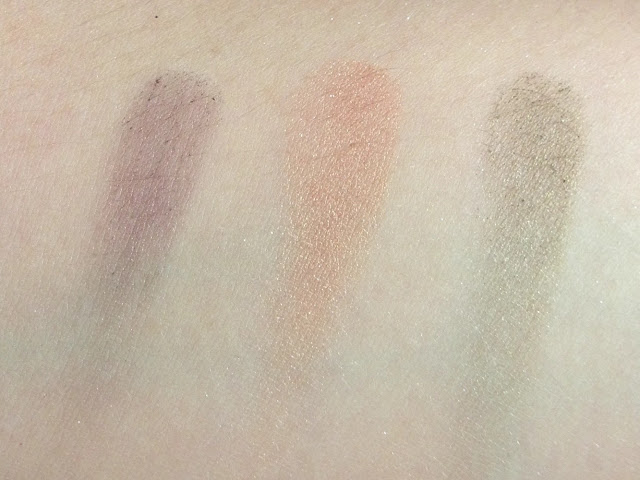 Replacements: Kiko Infinity Eyeshadow in 250 (olive shimmer); Kiko Eyeshadow Stick in 16 (dark purple). No replacement for Dayclub, as I ordered it expecting the "dark gold pearl" promised on NYX's website and not a terracotta nightmare.

Writing these mini-reviews has made me nostalgic. I'm turning 27 in just over a month, and exploring makeup and beauty has been one of the defining activities of my mid-twenties. I bought most of these products before I really knew what I wanted makeup to do for me. I can't even recall the reasoning behind some of my purchases, which is frightening. They're the material remains of lost thought processes, faded magazine images, transient moods and whims. But I learned something from each one of my disappointments. I learned to avoid ordering makeup sight unseen. I learned that cool fuchsia lipsticks flatter me and warm hot pinks don't. I learned not to buy lip glosses I can't use up in two years. I learned that it's better to spend $30 on one really nice thing than on four indifferent things. Though these lessons seem trivial when I write them out, they helped me take control of how I presented myself to the world. The stakes of makeup may be low, but the rewards are incredibly high. So I can't hold a grudge against any of the products I'm throwing away--not even those appalling NYX eyeshadows. Ave atque vale.
Posted by auxiliary beauty at 9:03 PM