Greetings from Londinium! I've been trying for the last few days to write a post about the makeup I brought to England this time, but I'm never at home during prime picture-taking hours, and I'm very picky about color accuracy. Today, though, I remembered that I wrote most of a review of Milani Bella Charcoal and Bella Navy a week ago, but put it aside because I hadn't yet worn Bella Navy. Now, though, I have! So here you go:

I made an interesting discovery recently.

Here are the four Milani Bella Eyes eyeshadows I've purchased in the past month: 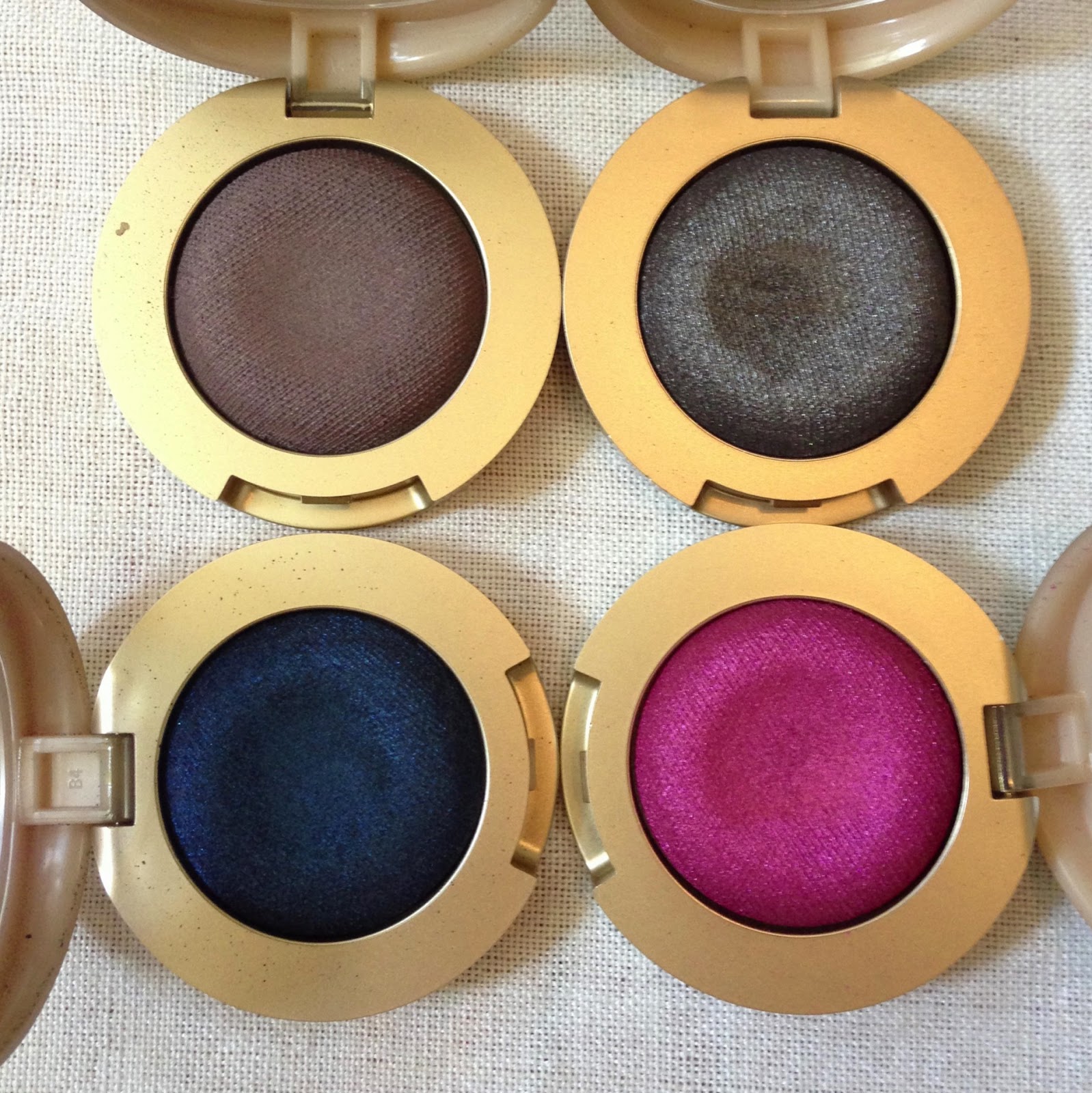 And here are four of the five Maybelline Color Tattoo eyeshadows I've purchased in the past year: 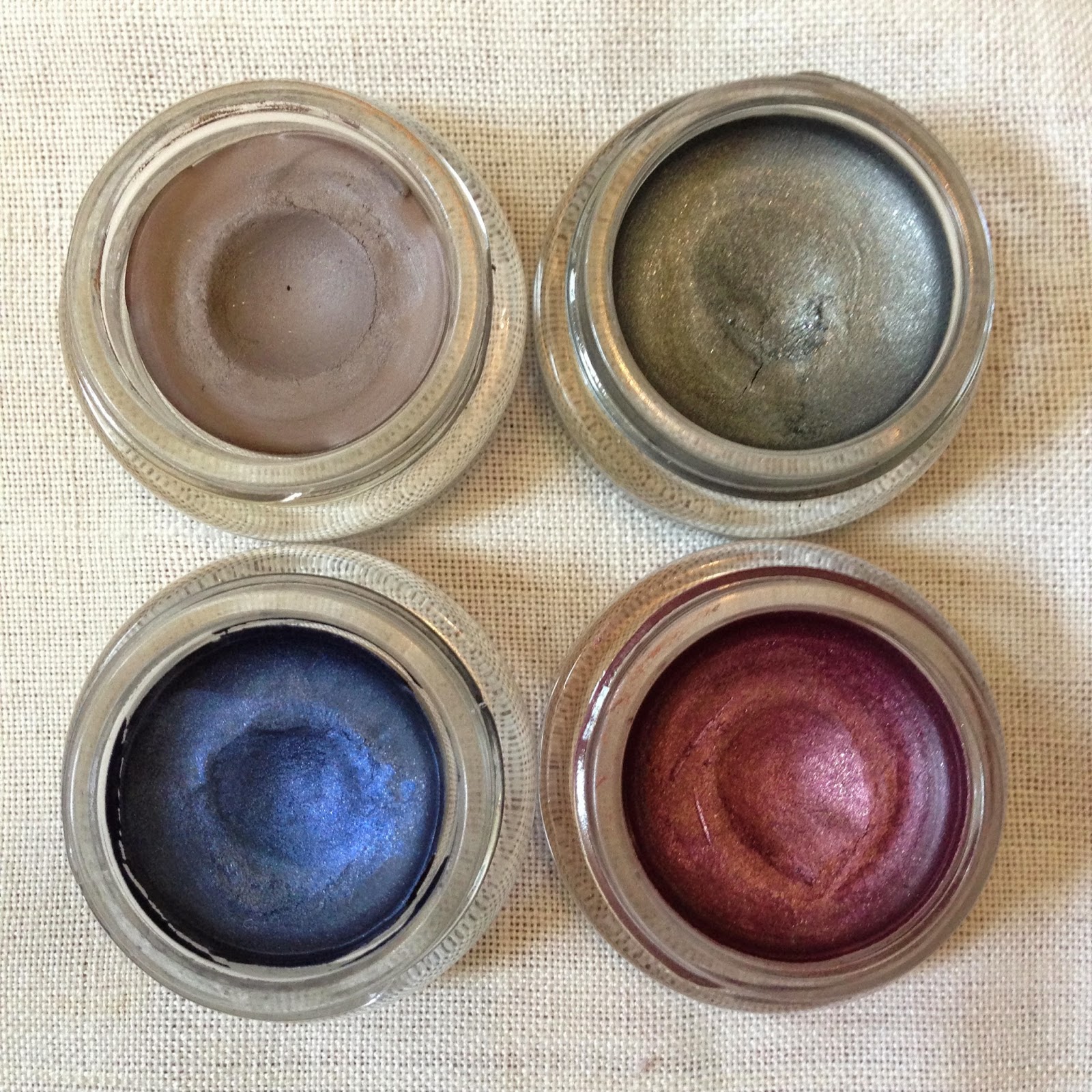 WHAT IS MY PROBLEM.

And the sad thing is, I don't have many more eyeshadows than the eight pictured above. Am I really that devoted to silver-grays, taupes, navy blues, and reddish plums? I swear I thought I was branching out!

Yet here we are, with a quick review of two more eyeshadow singles from the Milani Bella Eyes range: Bella Navy, a navy with electric-blue shimmer, and Bella Charcoal, a dark gray with multicolored sparkle. Milani classifies Bella Navy as a "satin matte" (false) and Bella Charcoal as a "shimmer" (true). 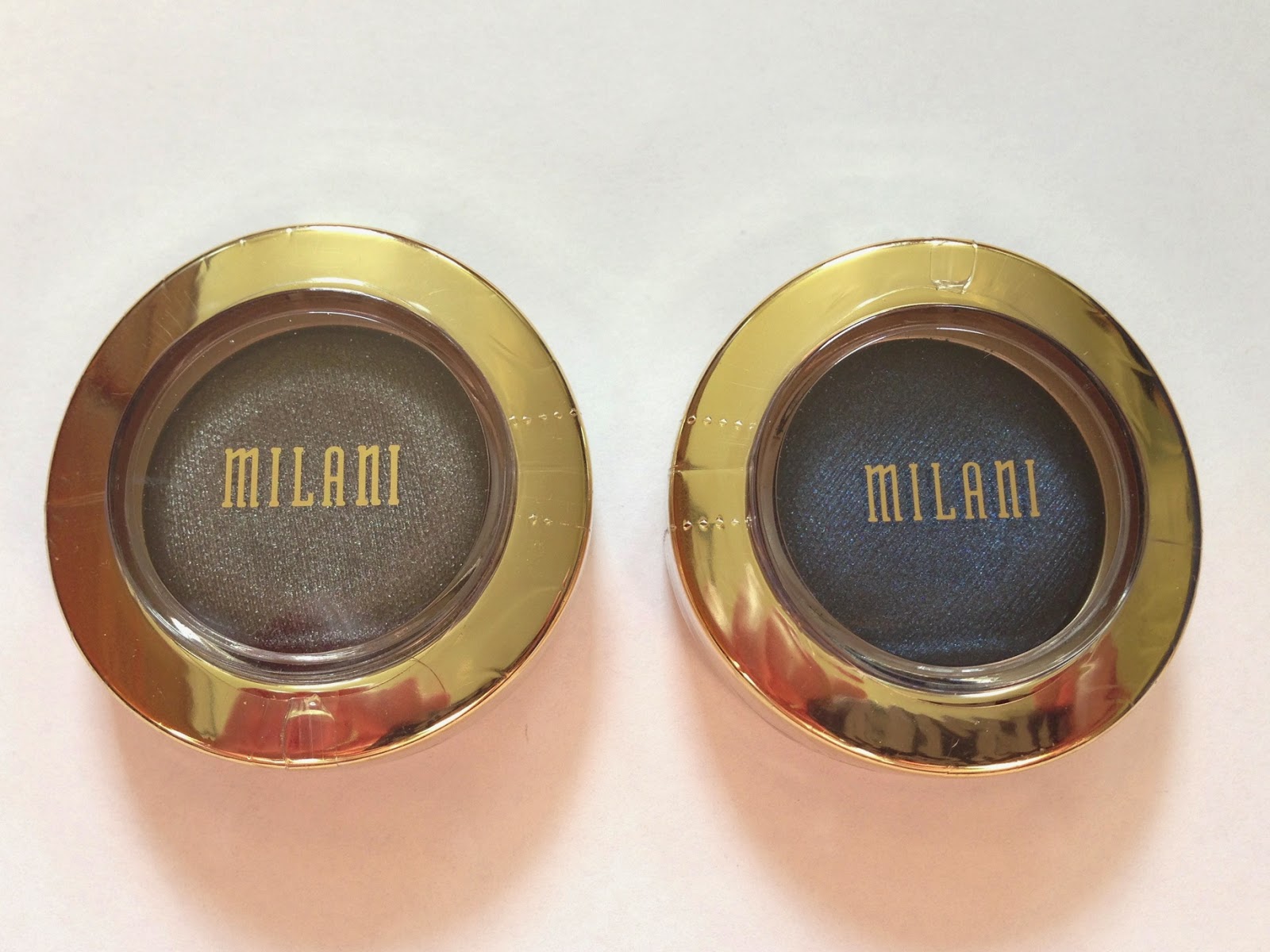 You may be wondering why, after giving Bella Taupe and Bella Rouge a largely unenthusiastic review, I picked up two more from the line. Let's just say that the flesh is weak and the wallet is weaker, especially under the influence of payday, a BOGO sale, and $5 in CVS coupons. Plus I wanted to replace my Maybelline Color Tattoos in Audacious Asphalt and Electric Blue, which were stiff, dry, and unblendable even when new. And these are fine replacements; in fact, I'm more impressed with them than I was with the first two. 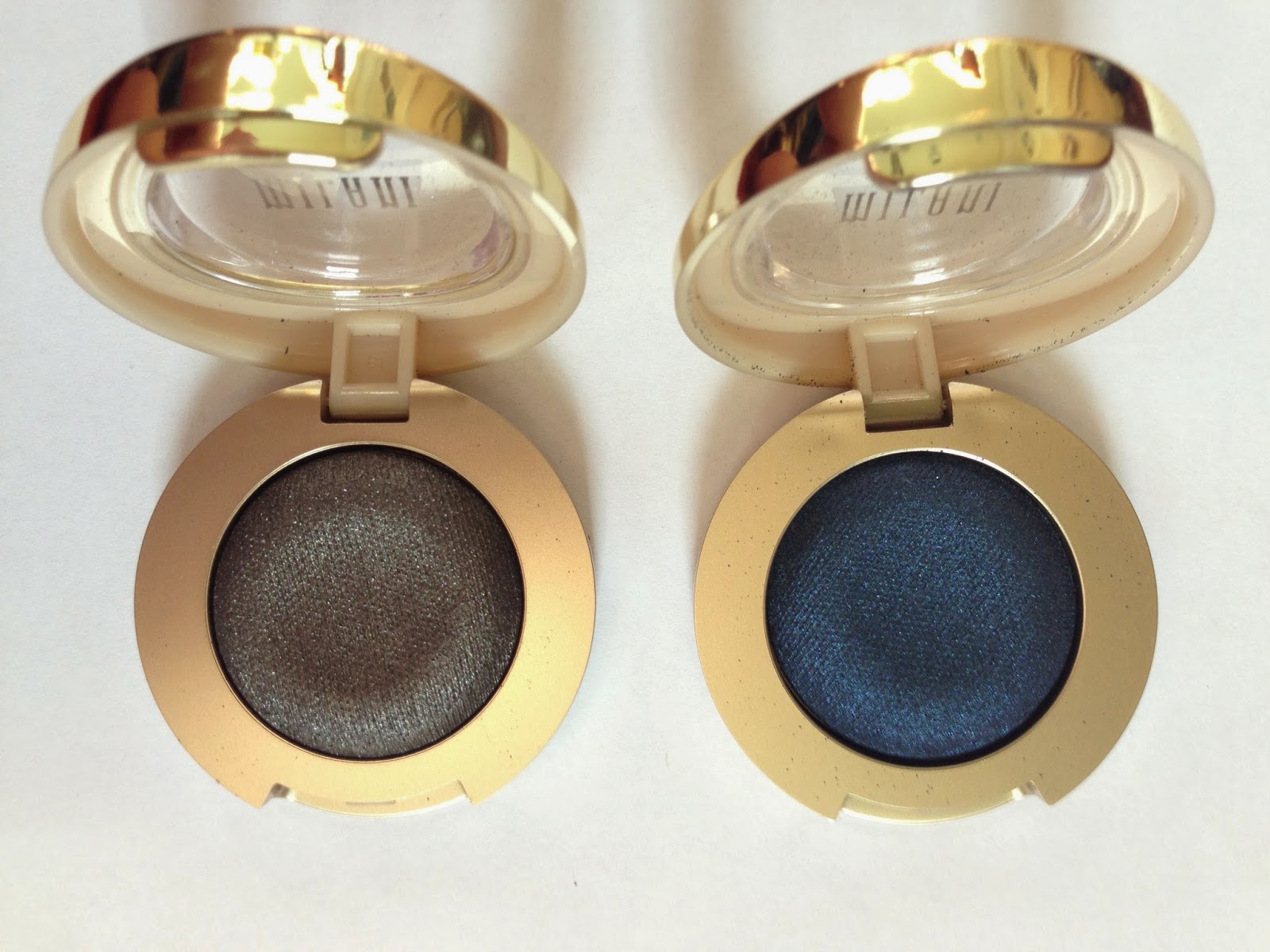 I'm especially enamored of Bella Charcoal. In my last Milani post, I despaired of finding complex eyeshadow shades at the drugstore, but Bella Charcoal has just about proven me wrong. 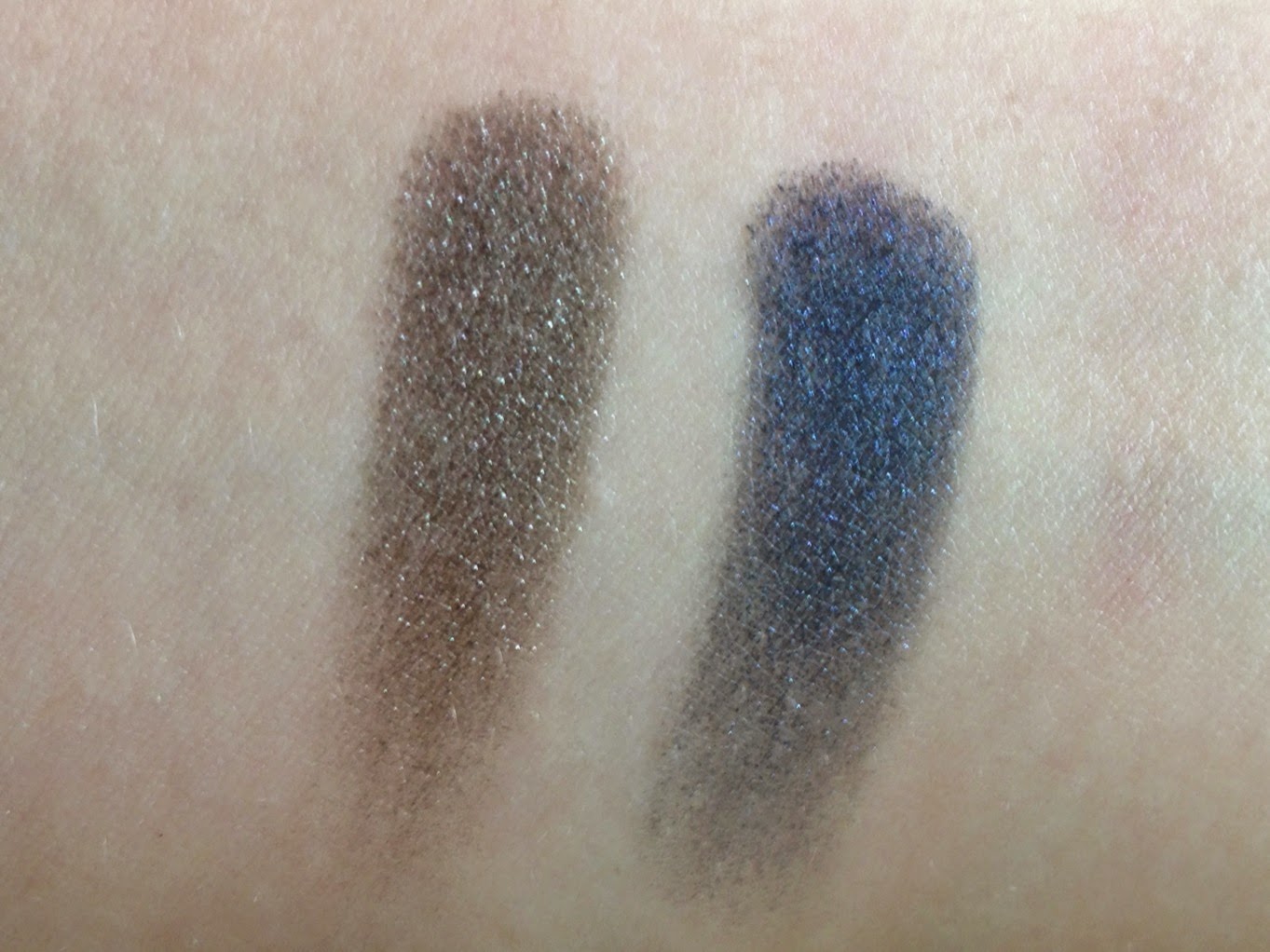 In direct sunlight for SPARKLE: 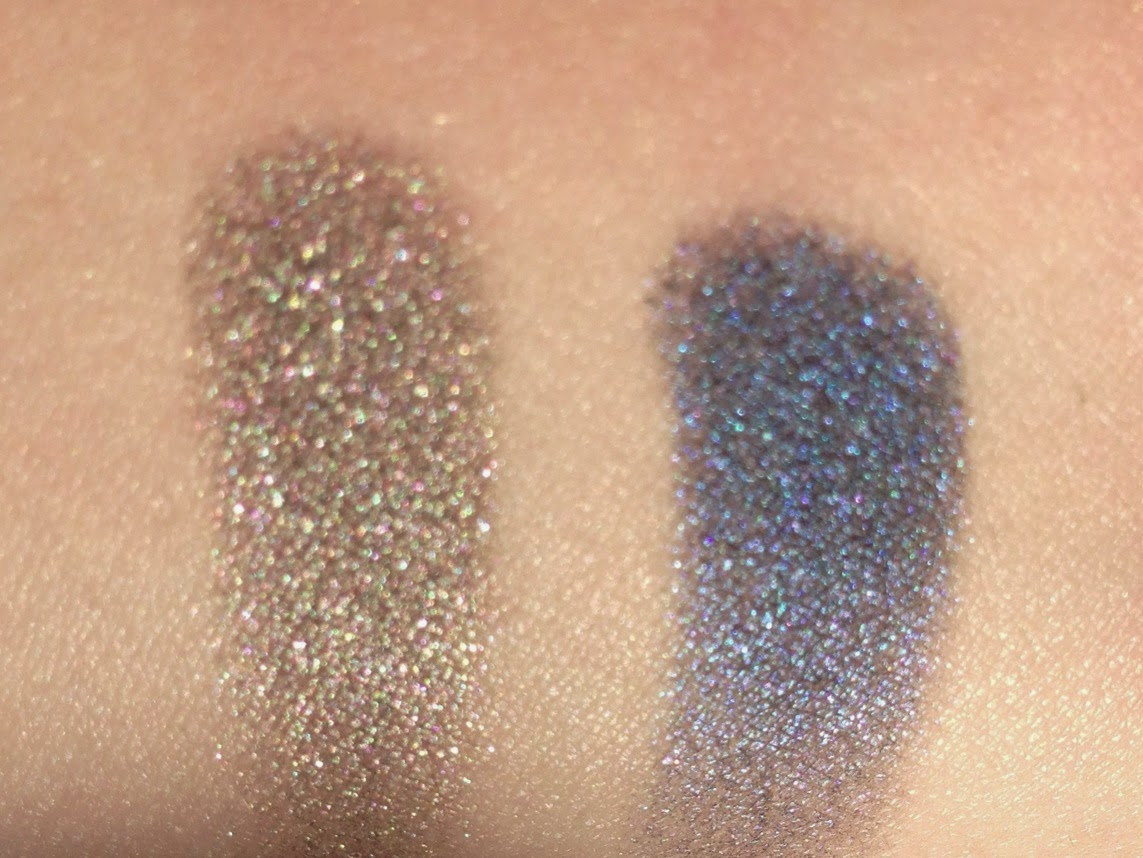 Despite its name, Bella Charcoal isn't a conventional charcoal gray. It has a taupey warmth to it, as well as that intriguing multicolored pastel shimmer--pink, green, and yellow seem to be the dominant colors. If you look closely, you can see that Bella Navy has a similar shimmery overlay, with flecks of pink and green in addition to blue. This complexity is much less evident on the lids, but, sparkle geek that I am, I like ogling eyeshadows in the pan almost as much as I like wearing them.

Here's a FOTD with Bella Charcoal, from two weeks ago. I applied Milani Bella Taupe all over my upper lid, added Charcoal to the outer corners and the lower lashlines, and finished with Maybelline One by One mascara. NARS Radiant Creamy Concealer in Vanilla under eyes; Illamasqua Zygomatic on cheeks; Wet n Wild Purty Persimmon, a blood-orange matte lipstick I don't wear as often as I should, on lips. 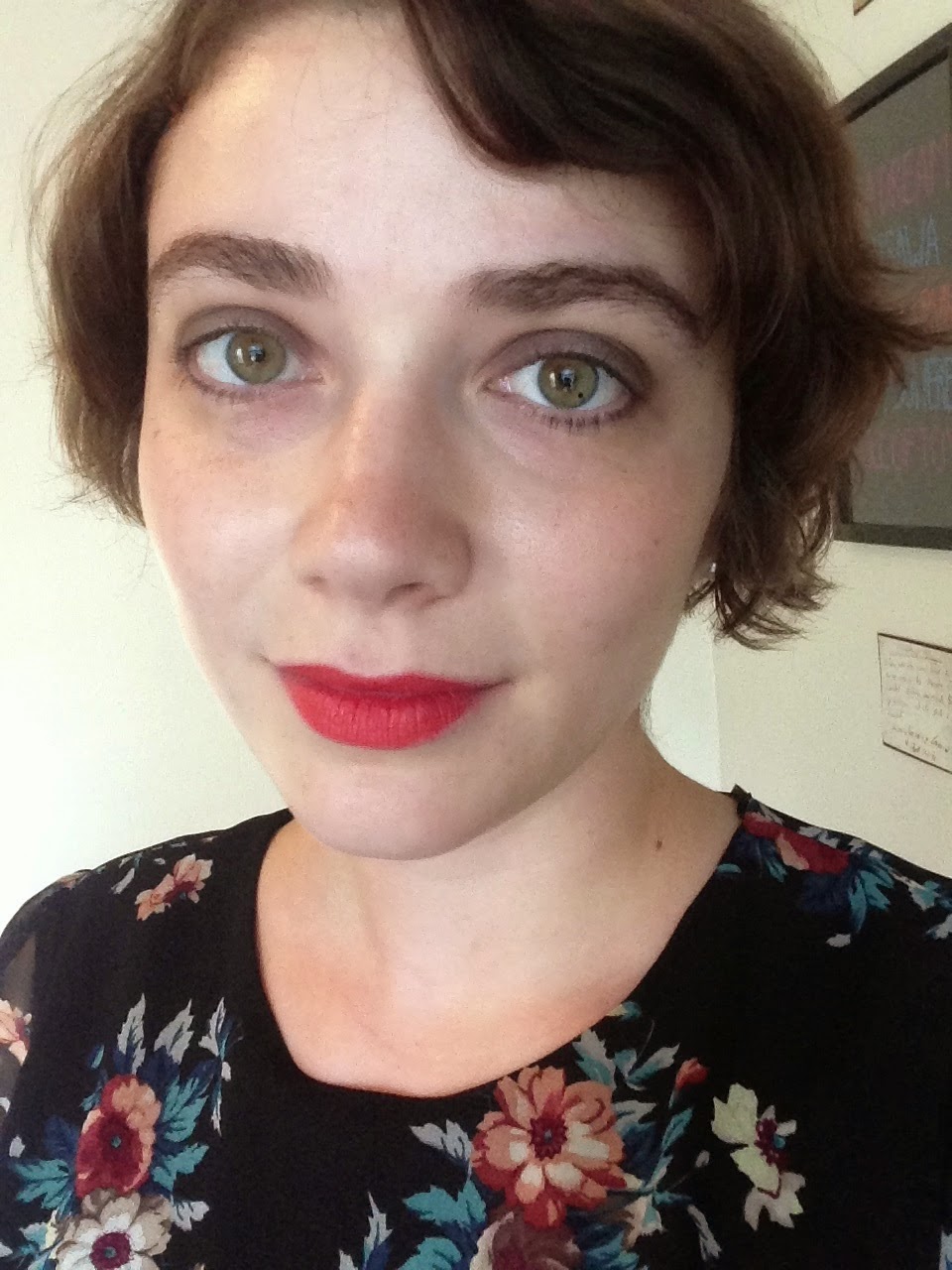 And the prettier of my two cocktails from that night (a blackberry bramble: gin, blackberry liqueur, muddled blackberries, and lemon). 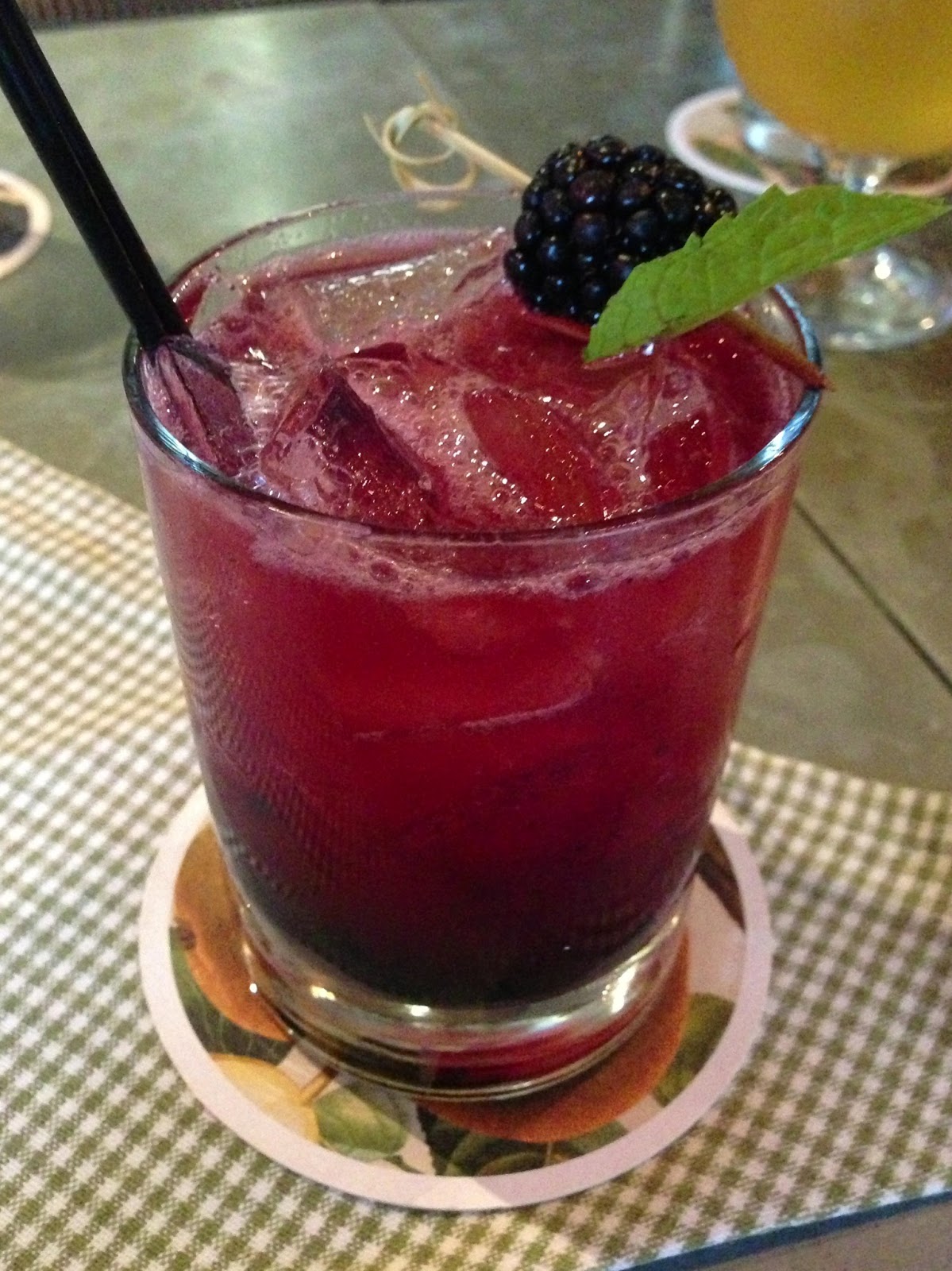 Yesterday I wore Bella Navy for the first time, in a standard placement: NARS Lhasa on the inner two-thirds of the mobile lid; Bella Navy blended into the outer third of the upper lid and the outer third of the lower lashline. It's less pigmented on the lid than it is in an arm swatch, but I don't actually mind. I don't set much store in zomgperfectlyopaque eyeshadows, especially in dark bold colors; I'd rather have a slightly sheer formula that I can layer to opacity. So long as it builds up smoothly without turning coarse and powdery, I'm happy.

Full face, with NARS Mata Hari blush and NYX Round Lipstick in Perfect, a rosy mauve that I neglected unfairly for a year: 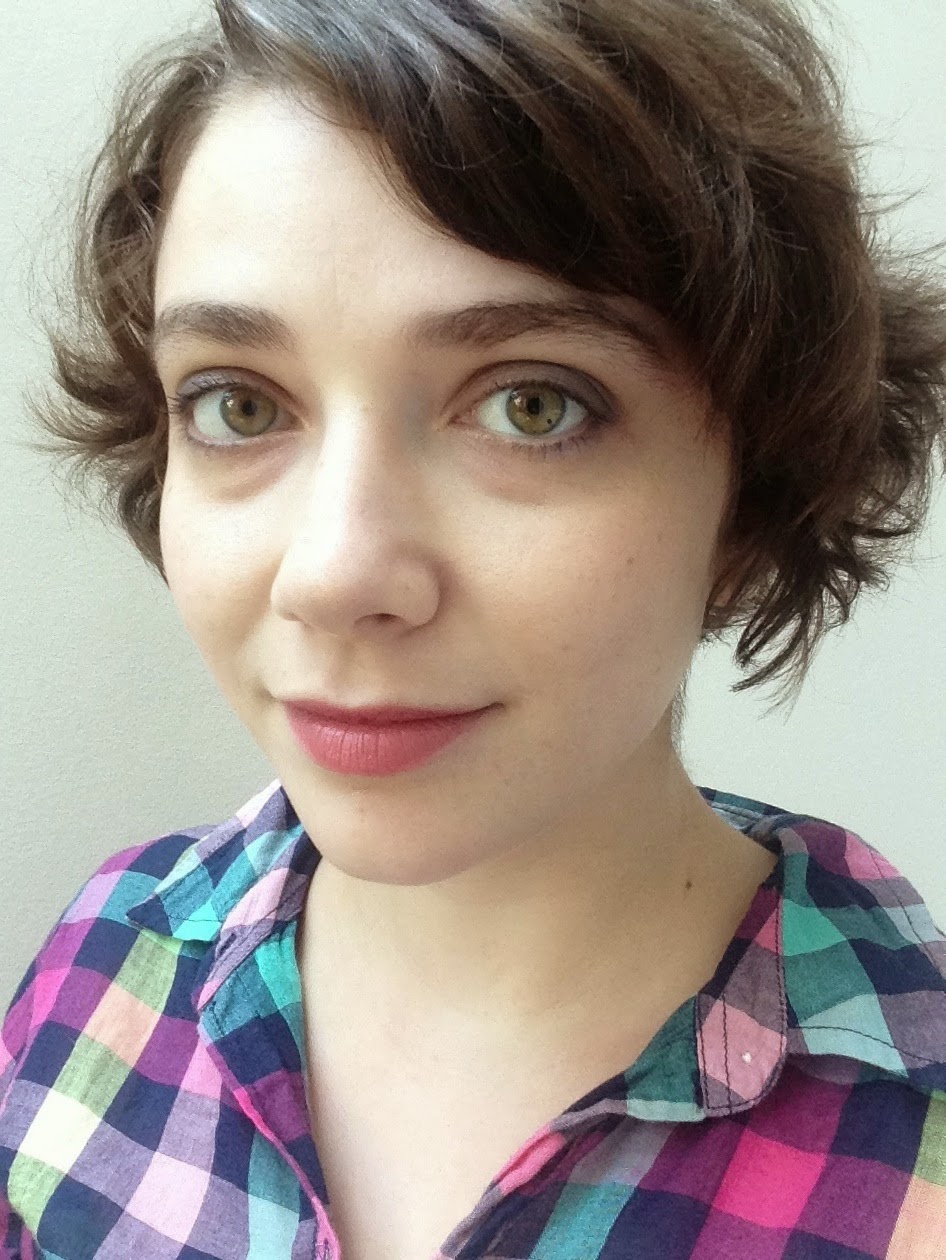 My hair has reached yet another infuriating stage of growth, in which the ends of the longest layers flip up and out, creating a Farrah Fawcett feathered effect up and down my head. It's now been five and a half months since my last pixie cut, and four months of bad hair days. Remind me never to cut my hair that short again. D:

In better news, some photos from London! The cat we're looking after has taken a fancy to sleeping on my suitcase: 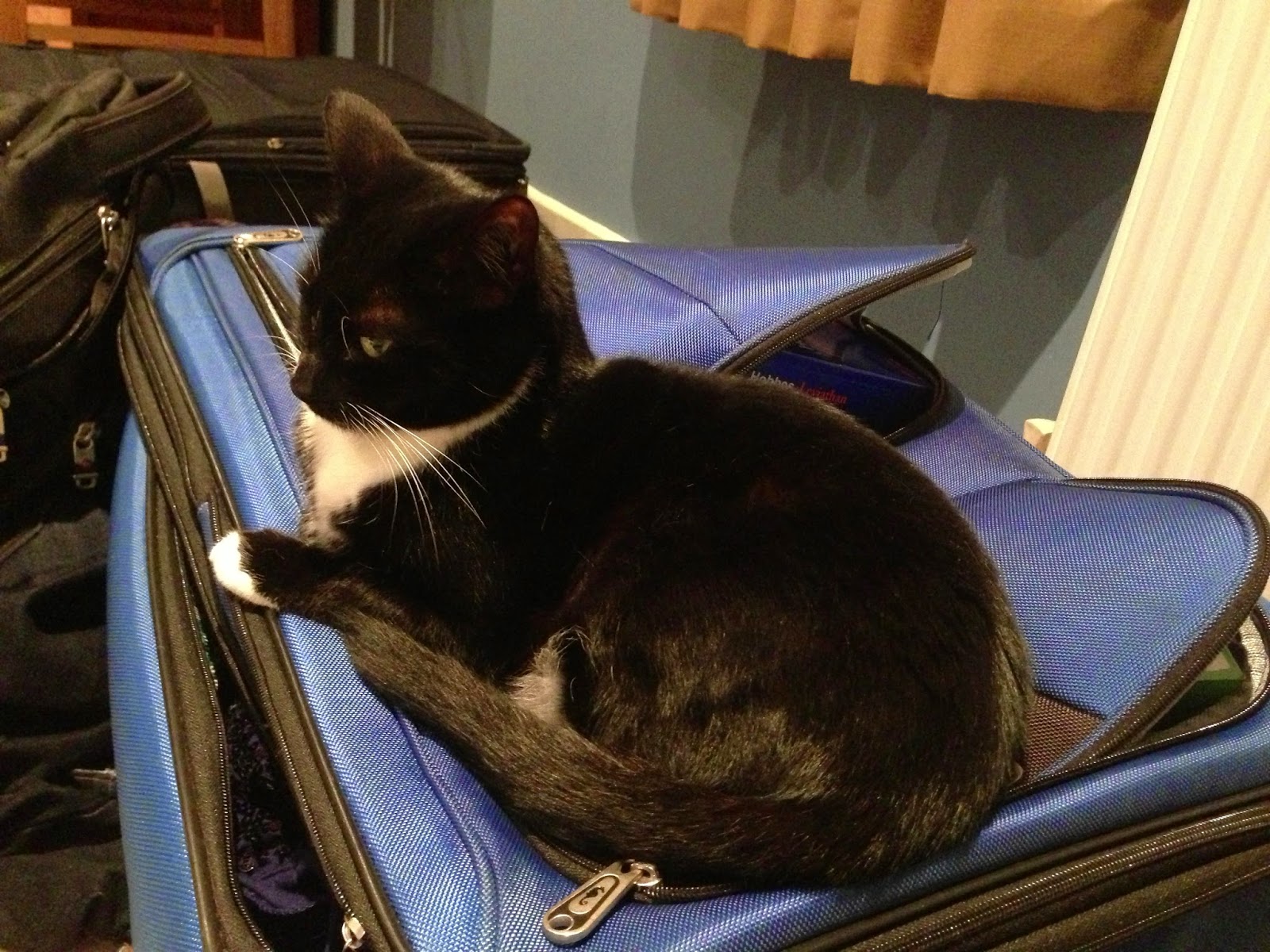 My favorite architectural bit so far: a monument from 1835, commemorating the abolition of slavery. What a disembodied neo-Gothic spire inlaid with pastel tiles has to do with slavery, I'm not entirely sure, but I love the gingerbread bizarreness of it. 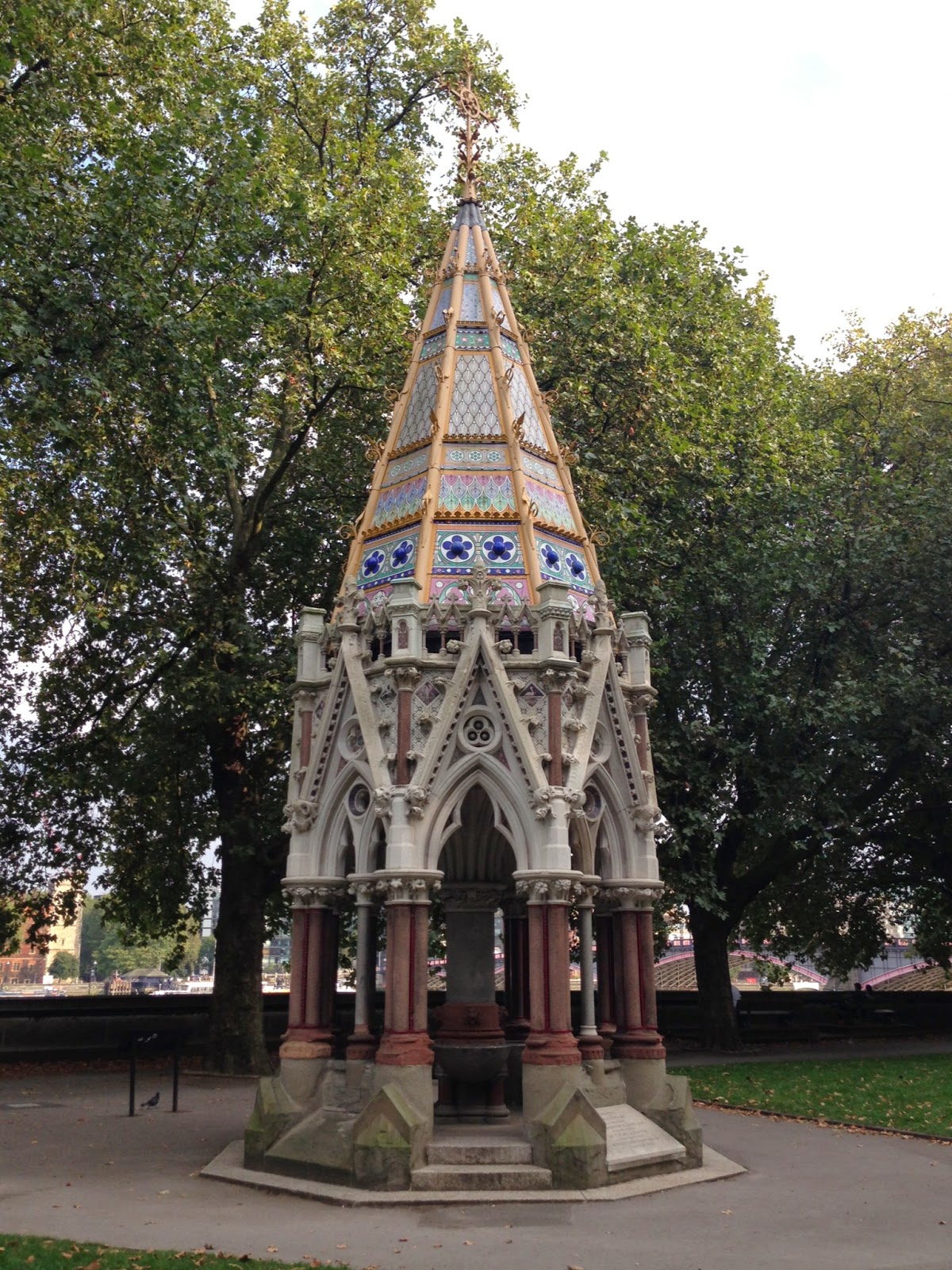 We're staying near the Beefeater Gin distillery, so we took a tour yesterday. Here's an ad from "Asia, 1972," though something tells me it appeared in Japan, specifically... 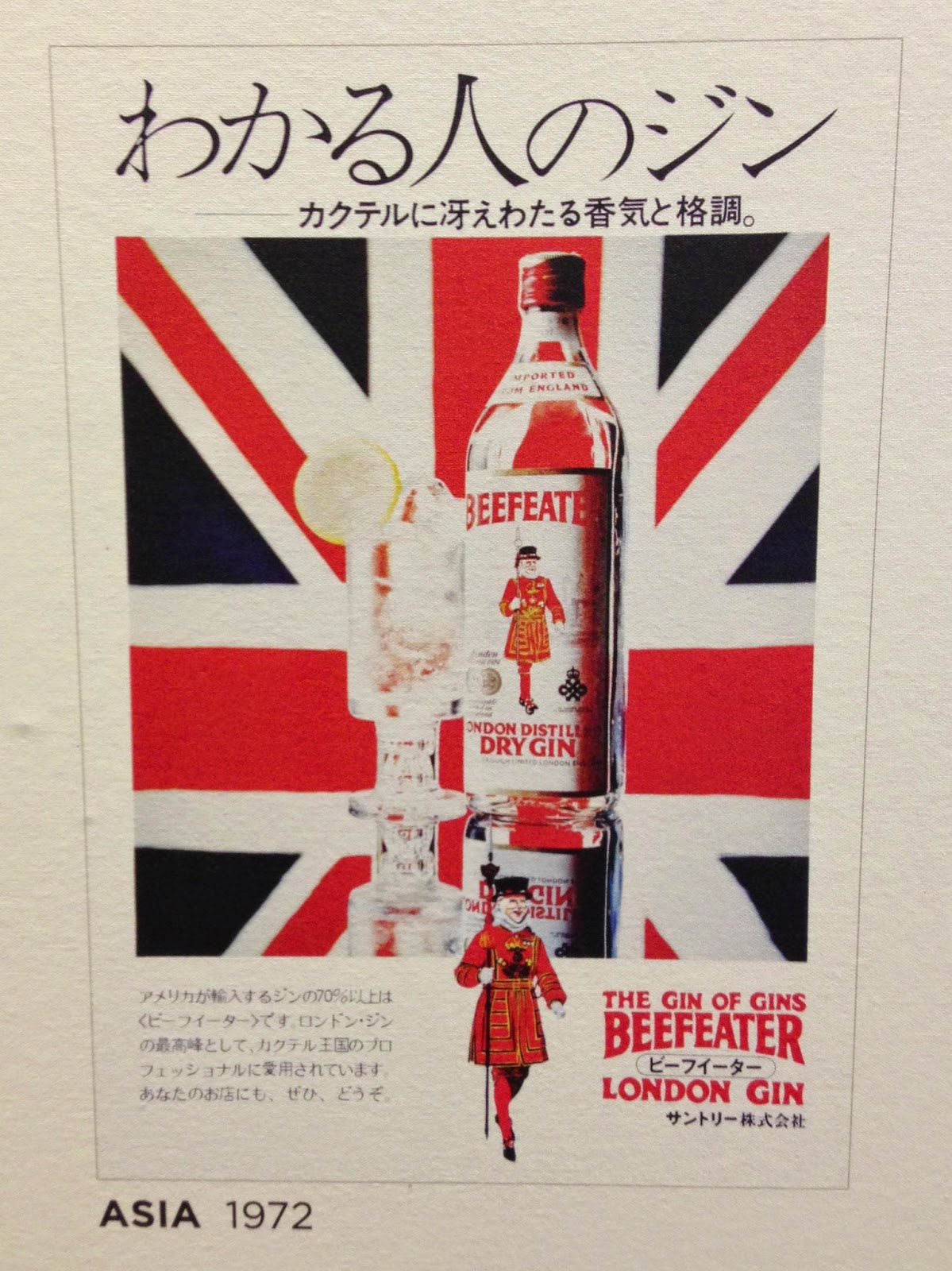 Later today: the Victoria & Albert Museum, devoted to decorative art and design. I can't wait. And if you have any London recommendations, please leave them below...

Updated, 9/14: This morning I opened my Milani Bella Charcoal eyeshadow and discovered that the domed portion had detached from the rest of the pan. Scandal! 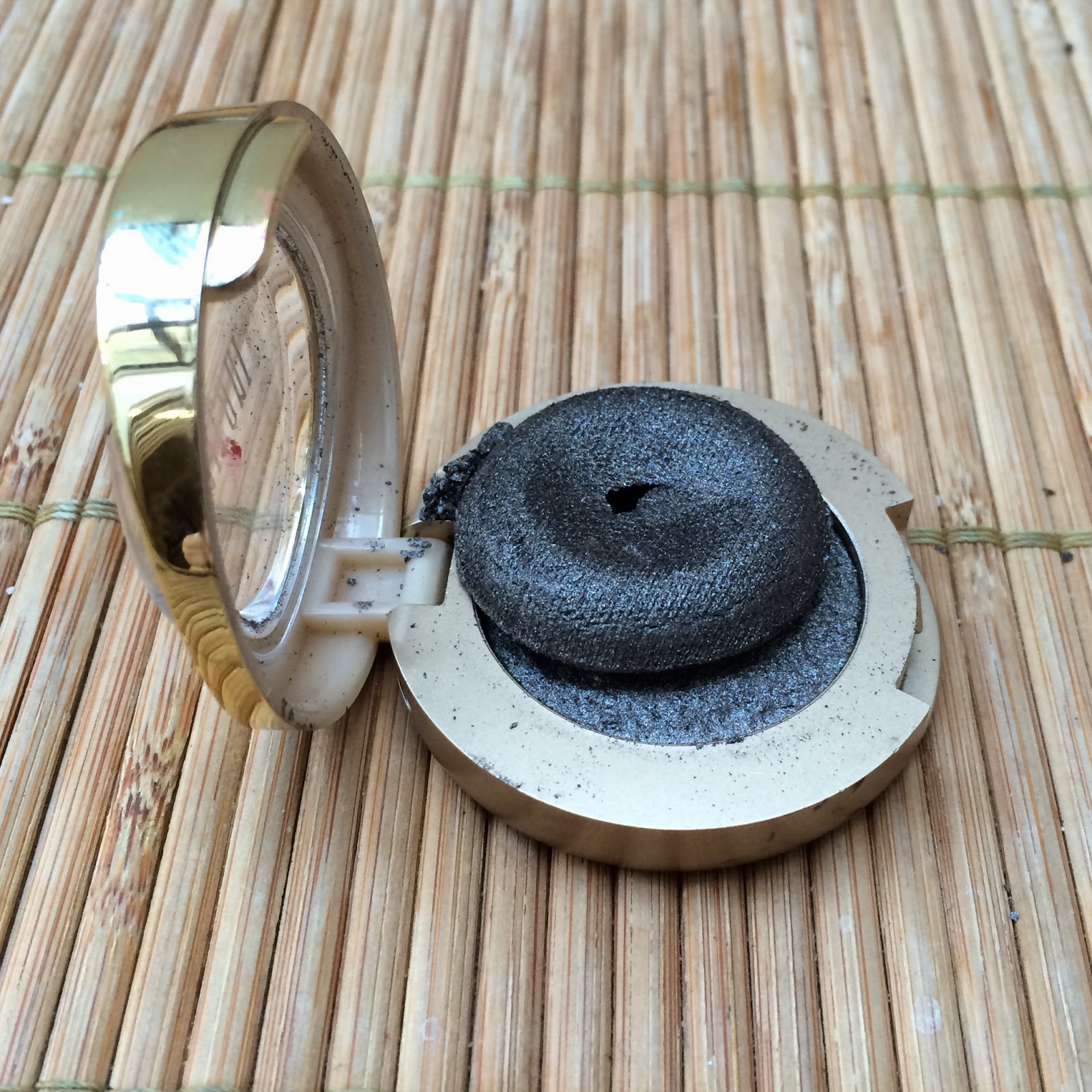 I bought Bella Charcoal just two weeks ago and never dropped it or mistreated it, so I'm pretty annoyed. Maybe I can look up depotting methods and press the detached part into another pot? I like the shade enough to try and salvage it, but my experience with Milani Bella Eyes hasn't done much to cure my general distrust of drugstore eyeshadows. Feh.
Posted by auxiliary beauty at 7:28 AM