NARS Audacious Lipstick Swatches and the Allure of Audrey

Today, as a reward for finishing an article draft and setting up a meeting with my adviser, I headed to the local Bluemercury to check out the new NARS Audacious lipsticks. I limited myself to seven swatches (as many as would fit on my hand), since I'm not audacious enough to swatch a collection of 30 lipsticks all over my upper body. These were the seven that caught my eye when I first looked at the display. The testers had been very lightly used, and many of them were still pristine. Is there anything more satisfying than being the first to use a lipstick tester? Probably, but let me keep my low bar for satisfaction, at least for now. I'm a grad student. Our pleasures are few.

Outside, in shade. Left to right: Liv, Audrey, Grace, Vera, Annabella, and (barely visible) Fanny and Bette. Liv is a deep reddish purple; Audrey is a rich plummy red; Grace is a hot pink coral, similar to MAC Impassioned; Vera is a reddish raspberry, similar to Revlon Cherries in the Snow; Annabella is an almost glowing coral-red; Fanny is a berry-fuchsia; Bette is a dark brick-red. 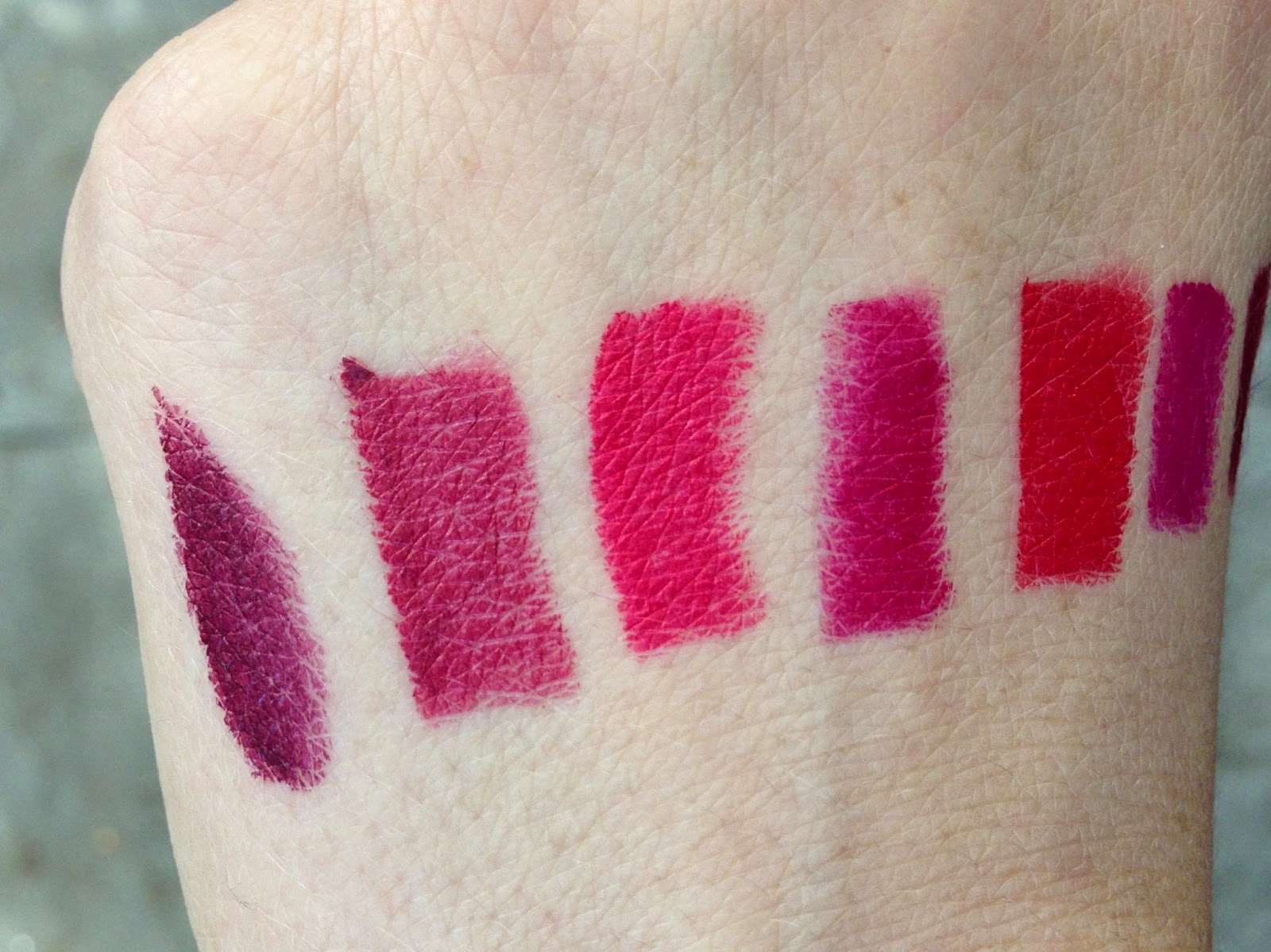 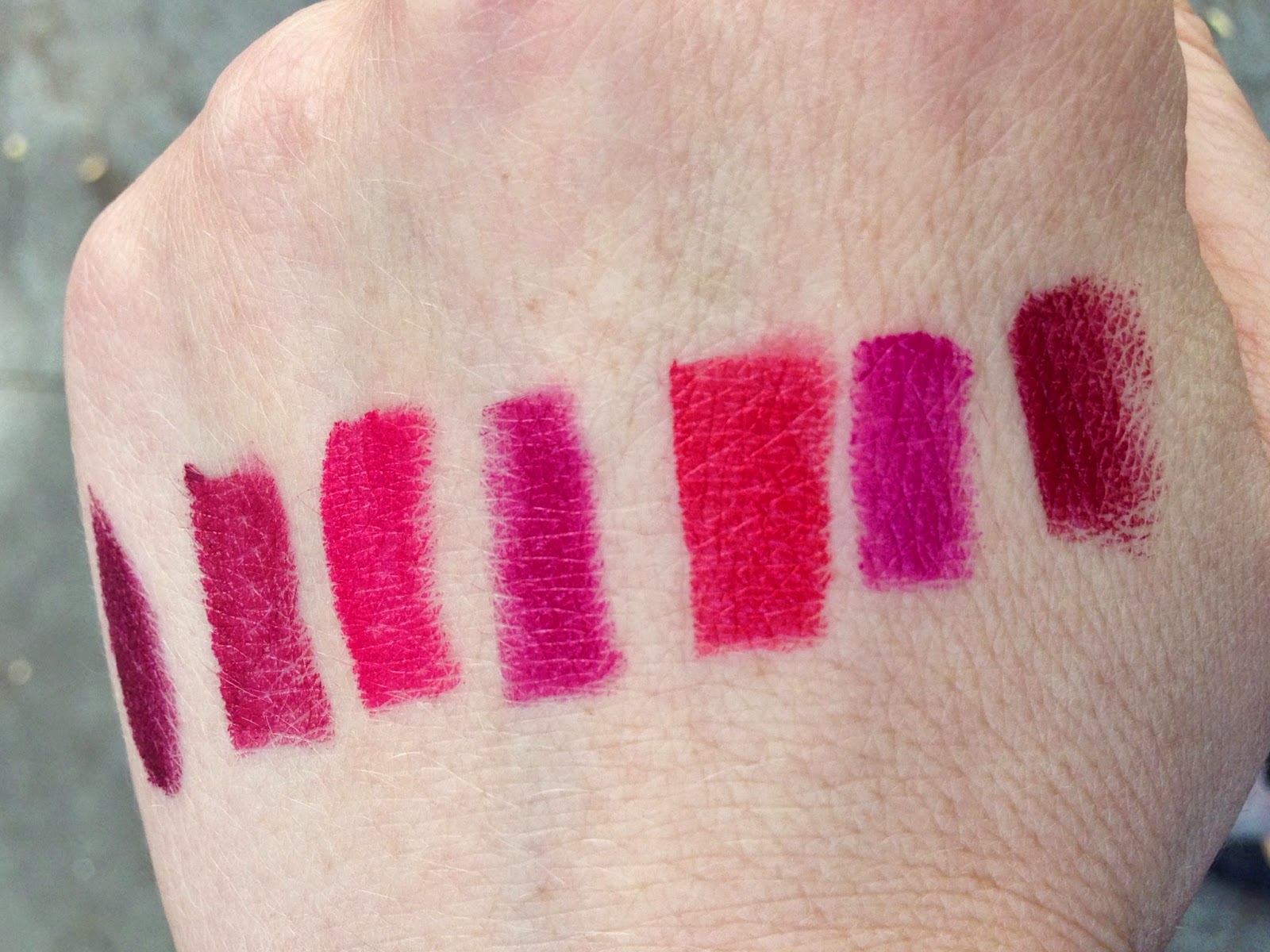 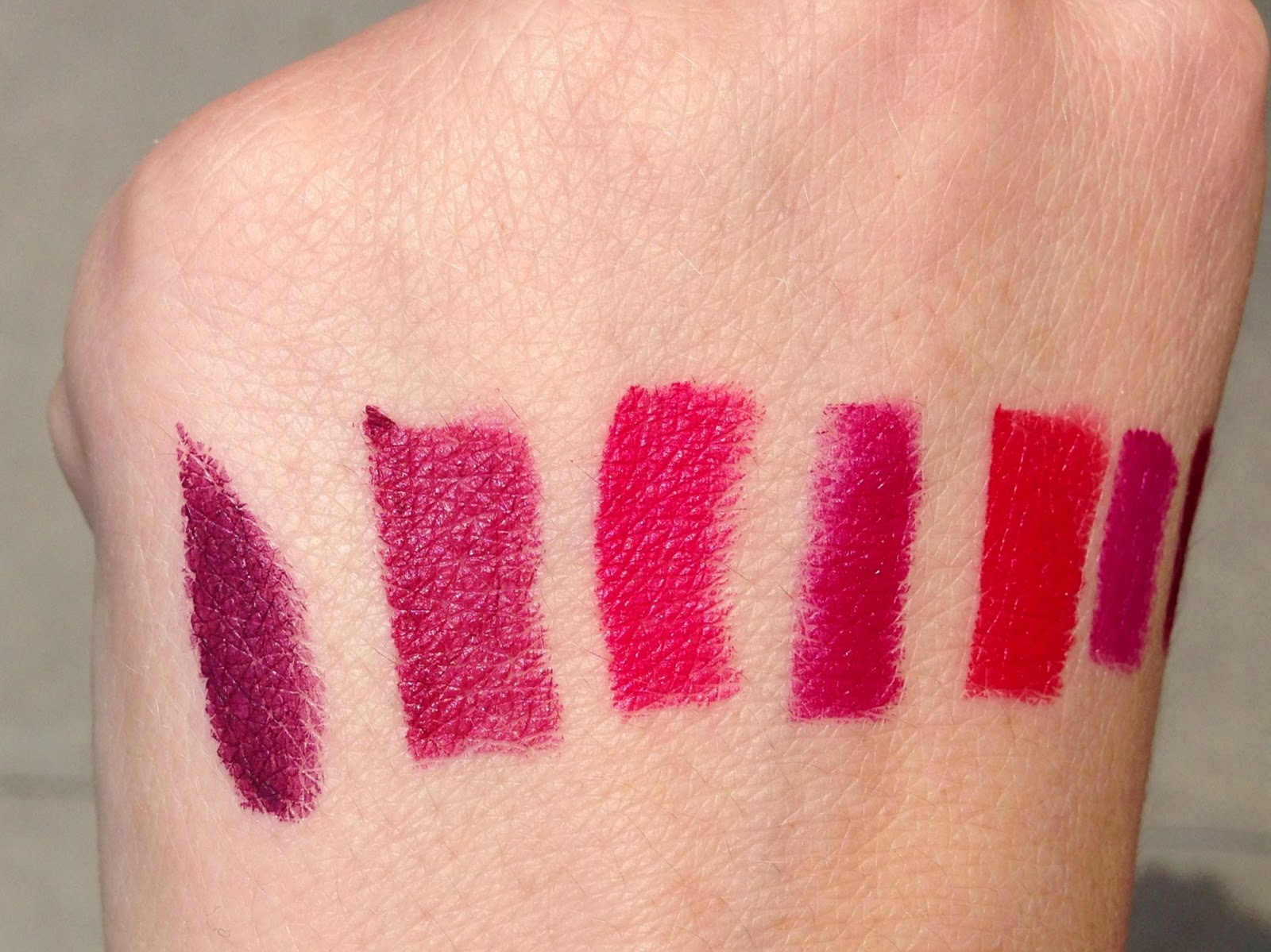 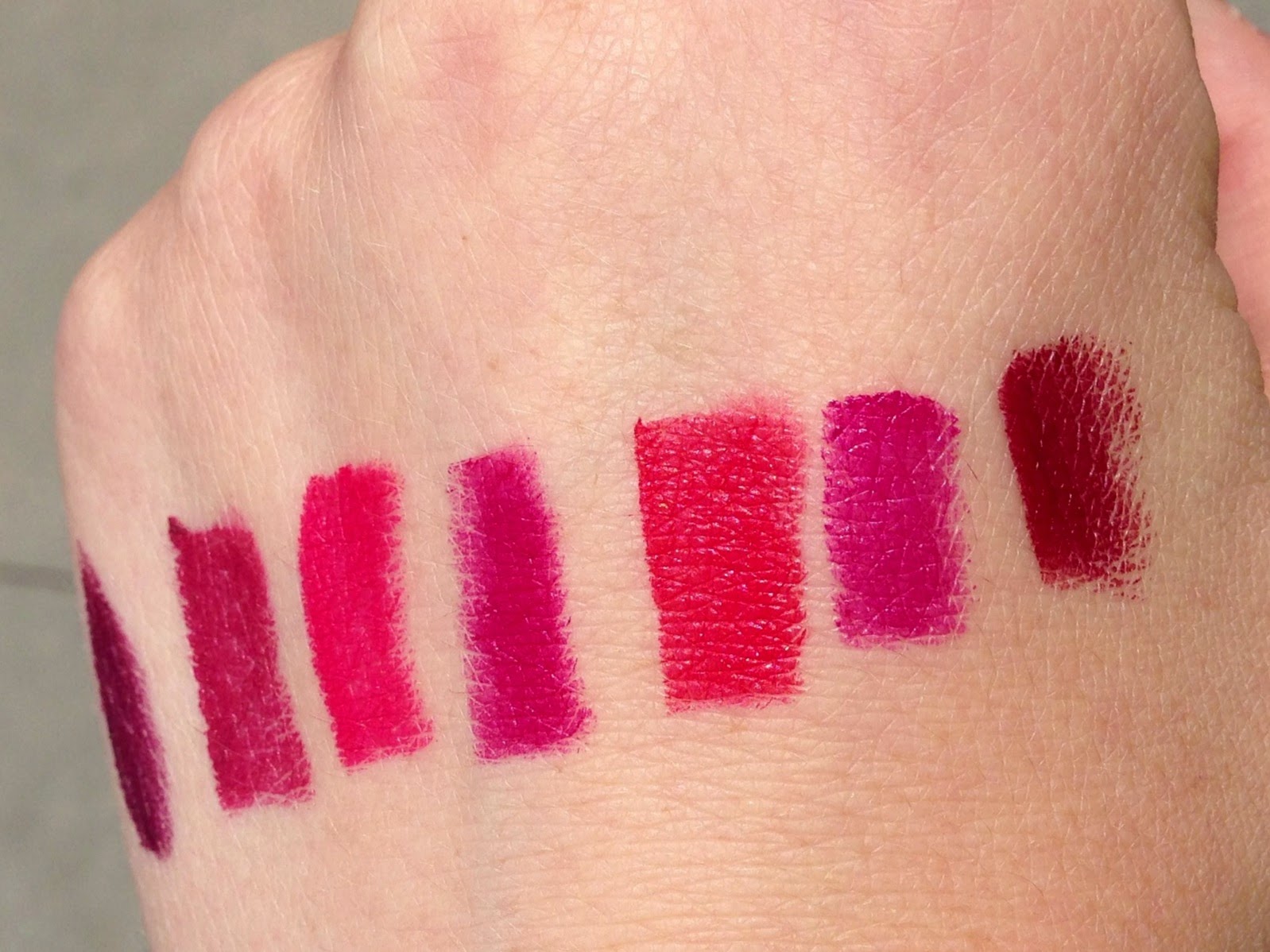 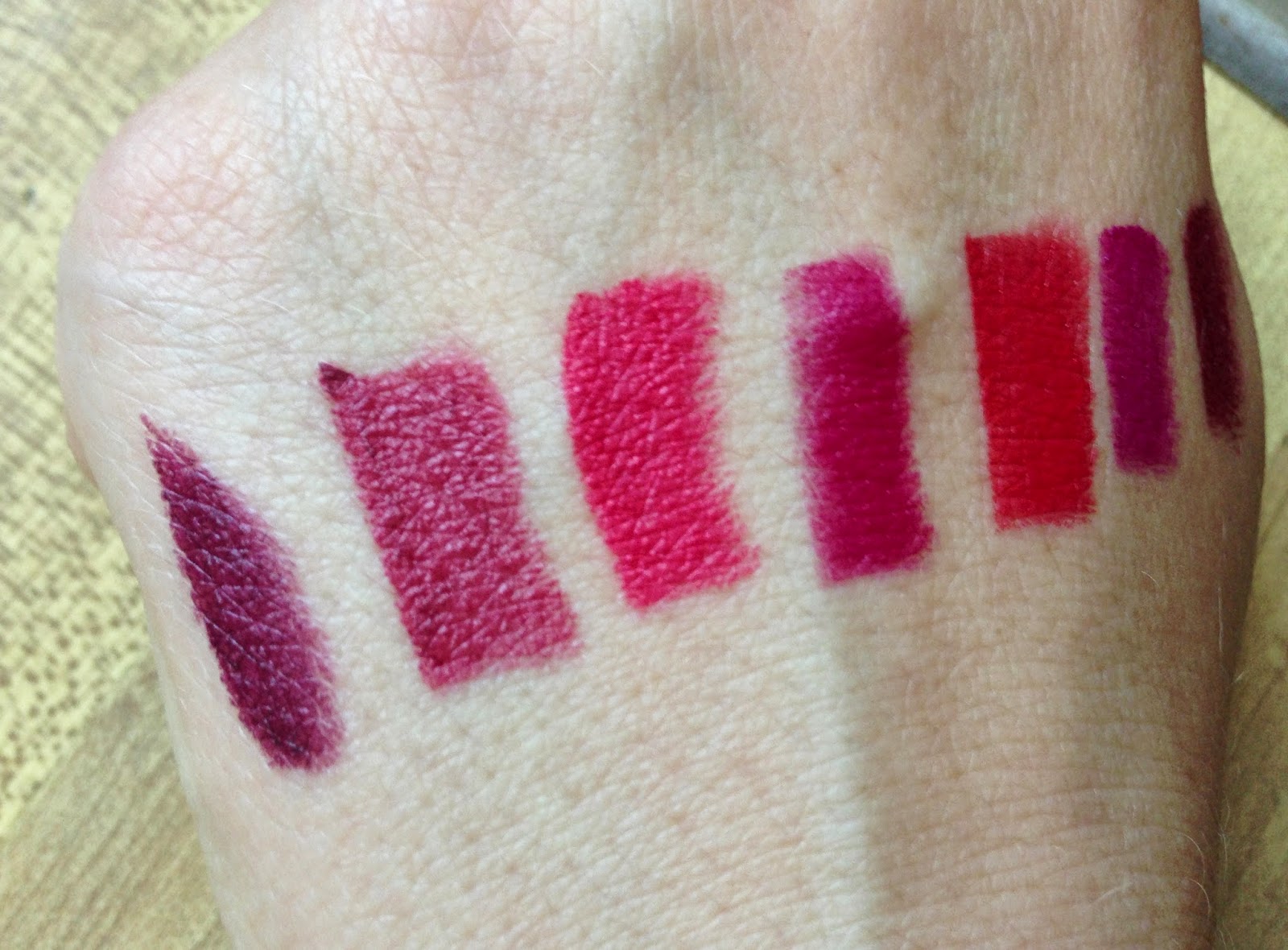 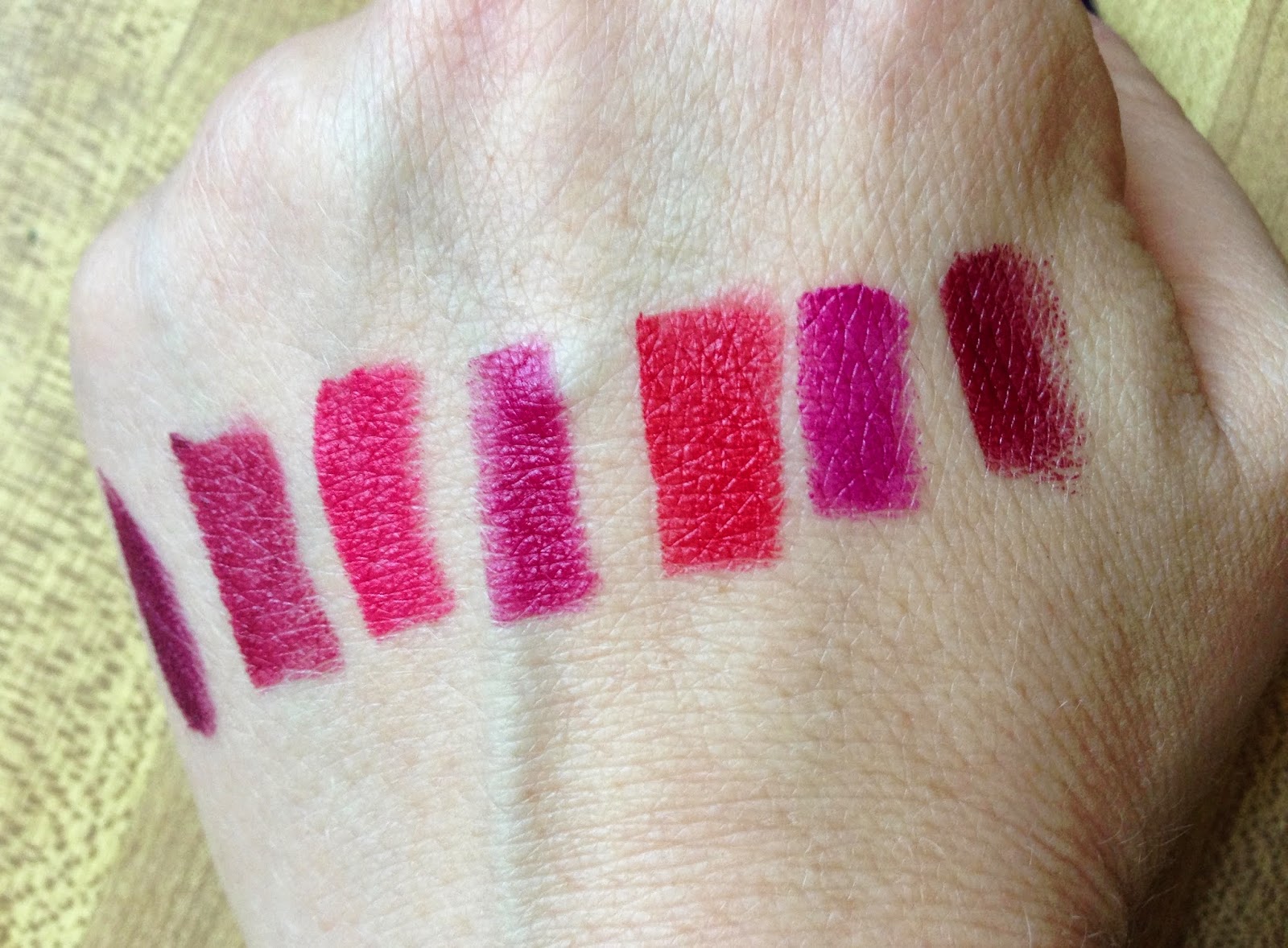 I was really impressed with the formula of these. The only shades that weren't intimidatingly opaque at first swipe were the darkest ones, Liv and Bette, and even those built up nicely. I tried on Audrey, and it felt extremely soft and comfortable on my lips (though I removed it 15 minutes later, before eating lunch). I came away uncertain whether to buy it, though. I'd anticipated a soft, faded berry red, but Audrey looked darker, more purple, and more intense on me than online swatches had led me to expect. That might be the fault of my pigmented lips, which tend to pull every lipstick cooler and darker. There really is no substitute for seeing makeup in person! 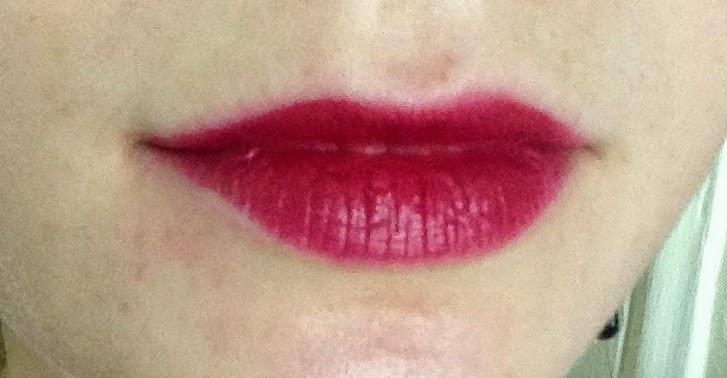 And a full-face photo, same light. I didn't plan today's eye makeup to coordinate with a dark red lipstick, but I actually like the interaction between Audrey and the mint eyeshadow from the NARS Habanera duo. 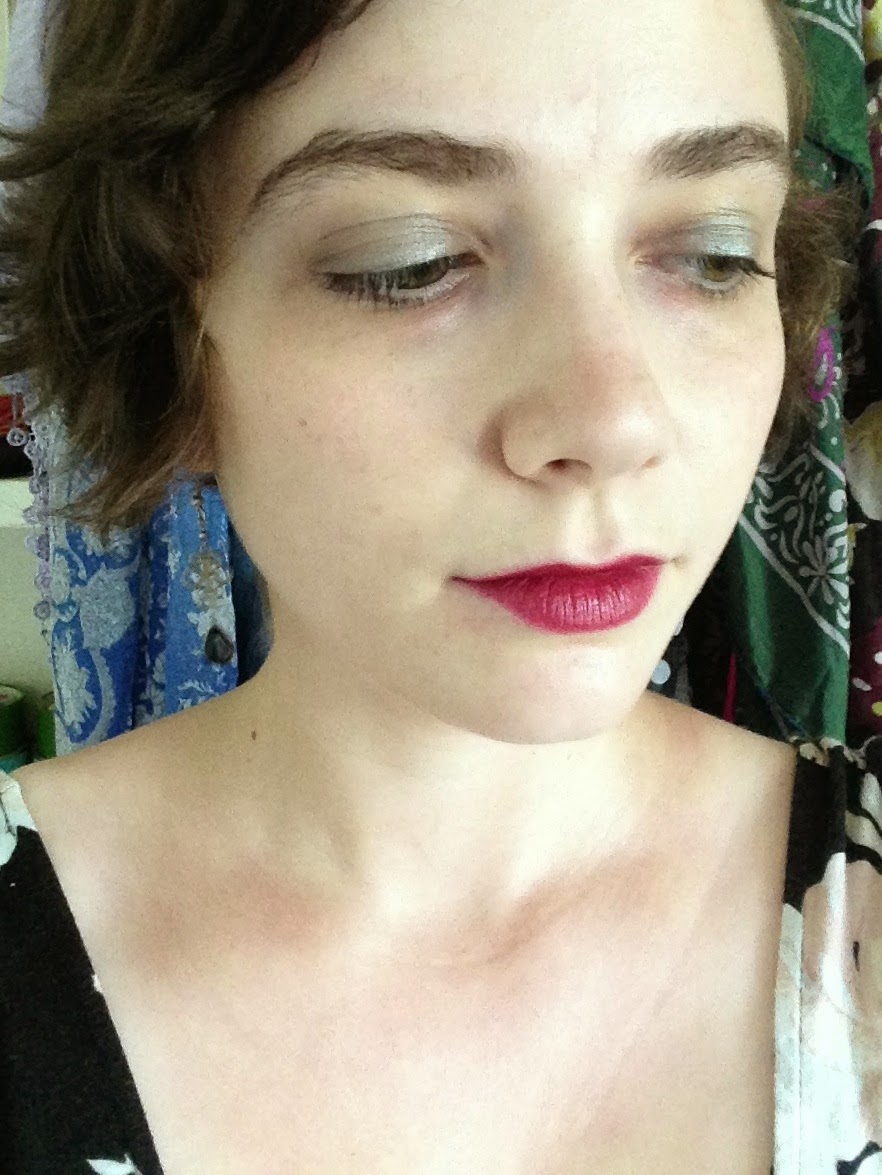 What do you think? Does Audrey look too similar to Rimmel Across the Universe or YSL Belle de Rose? Should I go for a different color? Fanny is undeniably beautiful, though I can't help but associate the name with a certain 18th-century novel...
Posted by auxiliary beauty at 1:55 PM