I keep a running beauty wishlist over at Pinterest, and I thought I'd wax poetic about a handful of those items on the blog. 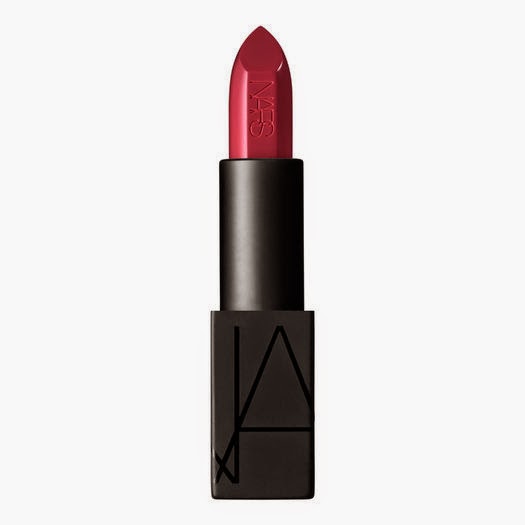 For the past few weeks, I've been zealously hunting down reviews of the NARS Audacious Lipsticks, which became available online in mid-August but didn't show up in stores until today. That is, today was their official launch date, though I saw a few of them in the window of a San Francisco NARS boutique two weeks ago. Apologies for my reflected Strand tote bag and yellow paisley torso. I would have gone into the store, but I was in a hurry, so this will have to do... 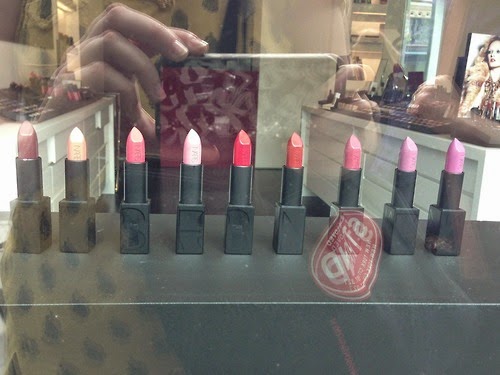 The lipsticks have received almost nothing but praise: Temptalia gave As to 32 of the 40 shades, and as we all know, there's no grade inflation on her blog. I confess I'm a little disappointed in the overall shade range, though. I'm not the only one who has noticed many dupes and near-dupes within the Audacious line. By my count, eight of the 40 lipsticks are warm reds or oranges, while there isn't a single blue-red shade à la Dragon Girl. There are also two near-identical fuchsias (Fanny and Janet) and six different peach-pink-beige nudes.

Luckily, NARS also included some interesting and sui generis colors. One of those is Audrey, a faded red berry. Believe it or not, I don't have a comparable lipstick in my stash: my berry lipsticks tend toward the purple side, while my red lipsticks lean either blue, orange, or brown. Other Audacious lipsticks that have caught my eye include Vivien, a dusty plum; Vera, a raspberry red; and Grace, a hot coral-pink. Here's Vivien, which is exclusive to Barneys and the NARS site: 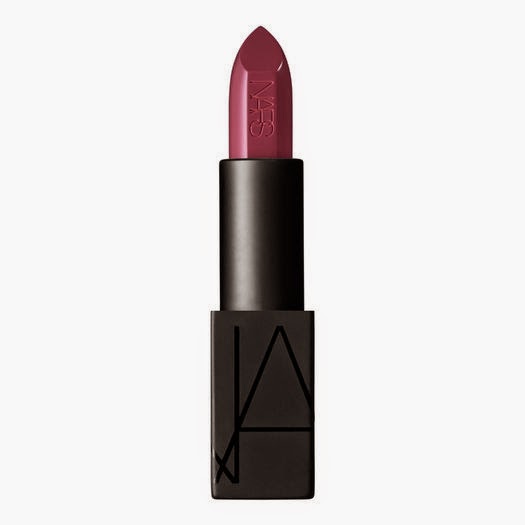 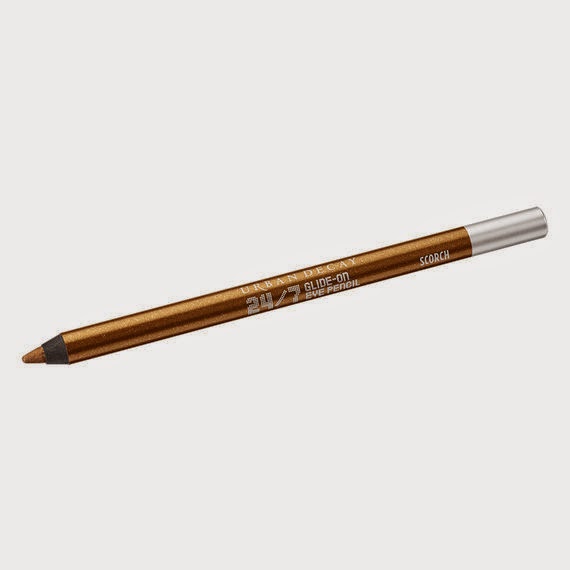 I've swatched this lovely bronze eyeliner at Sephora, and it does indeed glide on. However, it's also $20, which to my mind is a shocking price for a pencil eyeliner. I'd have no shame about buying a dupe from NYX's equally shameless Slide-On line, but the closest NYX match, Golden Bronze, is almost orange. Will AB shell out for the overpriced UD or leave well enough alone? Only time will tell. 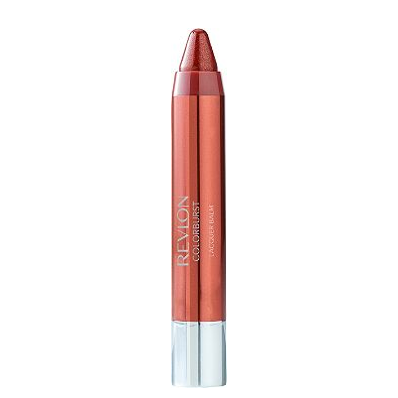 I'm not going to pretend that my attraction to this lipstick has nothing to do with my favorite 17th-century poem, Andrew Marvell's "To His Coy Mistress." But I also find the color perversely intriguing: it's a deep, shimmery brown. Something in my brain is challenging me to pull this color off, just as something in Marvell's brain challenged him to write really fucking weird poetry.

4. A true vampy lipstick in a glossy or satin finish

The darkest red I have right now is NYX Alabama, and I want something that leans more purple, but it's so hard to find a dark red-purple that isn't patchy. And I worry that such a color might make me look sickly and haggard, though I hope that avoiding matte finishes will prevent that fate. Hmm.

Indigo lips seem to be everywhere this season! Candidates include OCC Lip Tar in Technopagan, Kat Von D Studded Lipstick in Poe, and Portland Black Lipstick Company's Indigo Bridge. I might go with a sample of the PBLC, since I don't anticipate wearing this color often enough to justify a full tube of it.

ETA: I forgot that I made a swatch of Poe at Sephora last month! That unevenness isn't the lipstick's fault; the tester had been used so aggressively that I had to scoop the product out of the very bottom of the tube with one of Sephora's disposable lip brushes. The formula itself felt fine, if a little dry.  Didn't want to test it on my lips after half the population of San Francisco had had a go at it... 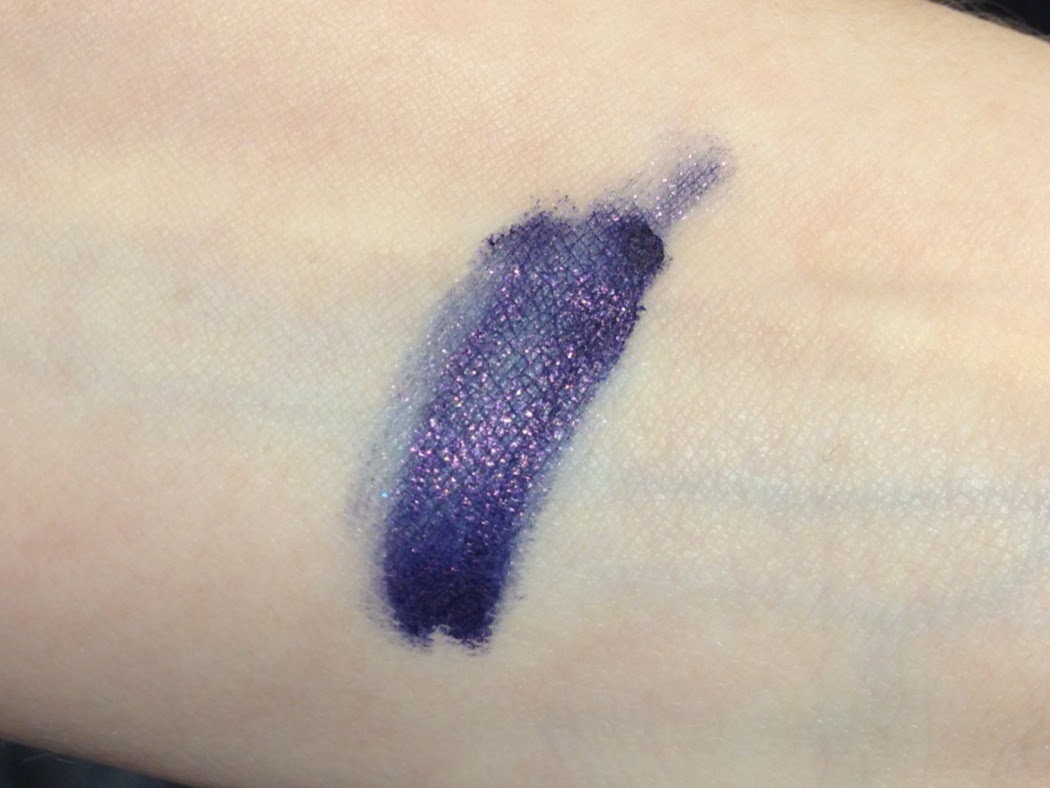 I want to try my hand at fragrance reviews on the blog, but my budget doesn't permit me to buy a full-size bottle of L'Artisan Safran Troublant, Delrae Coup de Foudre, or Comme des Garçons Avignon. And I've been swooning over these perfumes for, what, three years now? Certainly three for Coup de Foudre. Plus, Liz's Pinterest has alerted me to the existence of a $20 L'Artisan sample set from Luckyscent: 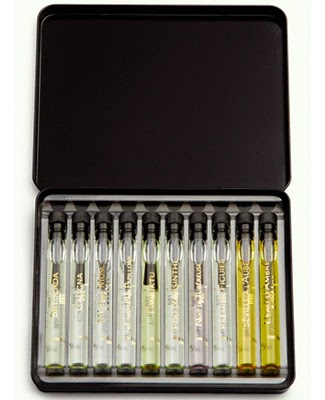 Before I order anything, though, I have to review Fresh Citron de Vigne and the trio of Lush samples I bought in February. That's only fair.

Oh, hey, did I mention that I'm going back to England this month? This time we'll be cat-sitting in London. It's a shorter trip than last time, and I don't want to go crazy with makeup hauling, but Facet caught my eye the last time I was over there. It's a gold-flecked gray, the sort of polish a cyborg would file under "neutral" and wear to an important interview. Very Illamasqua, in other words. 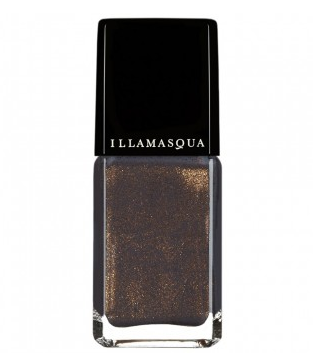 I'm also intrigued by Illamasqua's Fall 2014 collection, Once. The collection, according to Illamasqua's website, is "inspired by the gentle and exquisite point when a flower starts to fade and becomes impossibly beautiful in its complex decline. Combined with the subtle opulence of faded gilt layers that reveal themselves the more you blend and search." A few too many adjectives there, but the ancien-regime-in-decline aesthetic evoked by the product photos is very much My Thing. Check out this lady's collapsed rococo coiffure: 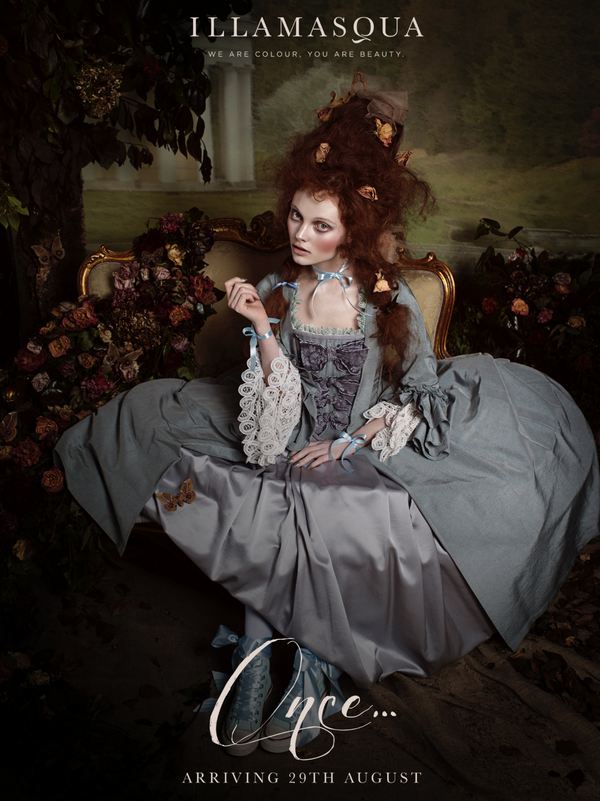 The products themselves feature a neutral brownish-rose palette, with the exception of Melange, Facet's teal cousin: 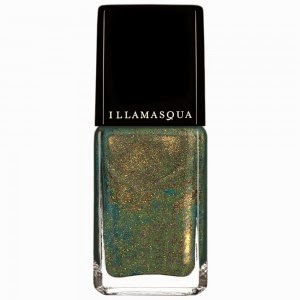 From the handful of swatch photos I've seen (here and here, for instance), Melange's base color is lighter and brighter than it appears in this image. It still has that tarnished-splendor effect, though.

The only one of these items I'm fairly certain I'll buy is Audrey (and if I do, expect a review!). The others, well...we'll see.
Posted by auxiliary beauty at 10:42 AM