I'm back! Thank you to everyone who commented on my last post: your kind words were much appreciated. I did what I needed to get done, and now I'm excited to return to blogging. I've missed it a lot! Missed it so much, in fact, that I kept a photographic record of all the makeup I wore during my hiatus. I had nowhere to be on a daily basis except the coffee shop closest to the library, where I chipped away at an application for a fellowship that I have a laughably small chance of winning. Somehow this made me treasure the ritual of putting on my makeup even more than I already had. I like these little reminders that I have an identity beyond my dissertation.

In the last few weeks, I've entered a nesting phase with my makeup. My urge to haul waxes and wanes, and right now it's at a very low point. At the risk of sounding deranged, I want to get to know the products I have. I want to use them to their full potential. My wishlist is as long as ever, but far less urgent. One day I'll choose a NARS Audacious lipstick. One day I'll go to the new Tony Moly store in New York and look for that lavender blush. One day I'll see for myself if the fuss over Tatcha is justified. For now, though, I'm content to rummage through my stash and find new uses for old favorites. I may not have an impressive collection by beauty-blogger standards, but I have more than enough makeup for one face--and I'm told that one is all I get.

With that, a compendium of FOTDs from the last week or so. In all of these looks, I'm wearing CoverGirl LashBlast Length mascara, NARS Radiant Creamy Concealer in Vanilla to cover my undereye circles, and a bit of theBalm Sleek eyeshadow to fill in my brows. I'm so boringly monogamous where anything that isn't lips-cheeks-eyelids is concerned.

After I read this article, I realized that I hadn't worn a hot-pink lipstick in quite a while. I used to be quite the fuchsia enthusiast, but this year I've favored purple and oranges and corals. And now that fall has arrived, fuchsia feels inappropriately coquettish. But why should it? Can't it be as deep and jewel-like as a burgundy? I place white-based fuchsias like MAC Candy Yum-Yum firmly in the spring/summer category, but Revlon Colorburst lipstick in Fuchsia (now discontinued, alas) is vivid without approaching neon brightness. I also used NARS Mata Hari blush and Lhasa eyeshadow. 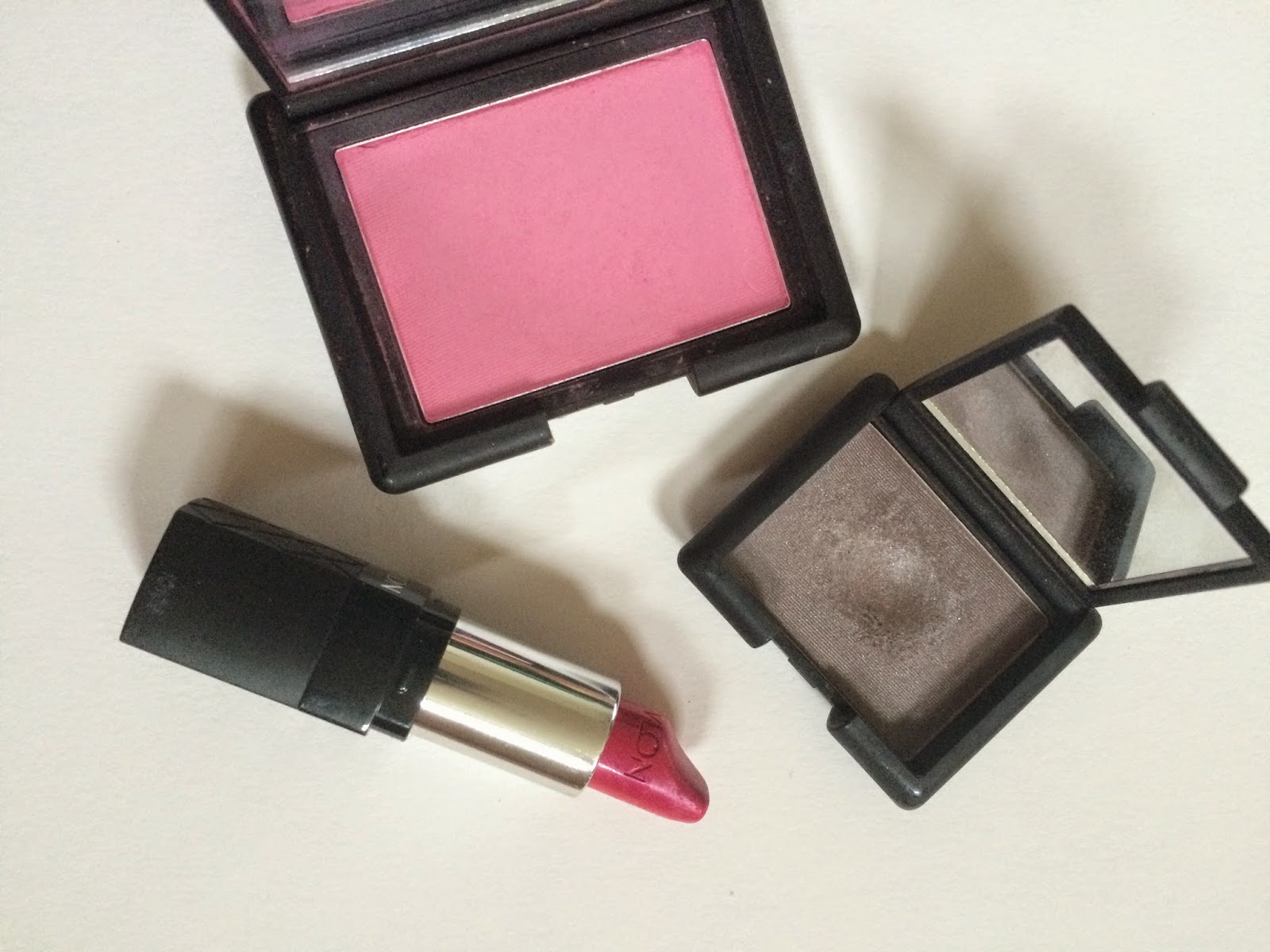 I think the lavender undertone of Lhasa harmonizes nicely with the blue-based Fuchsia. 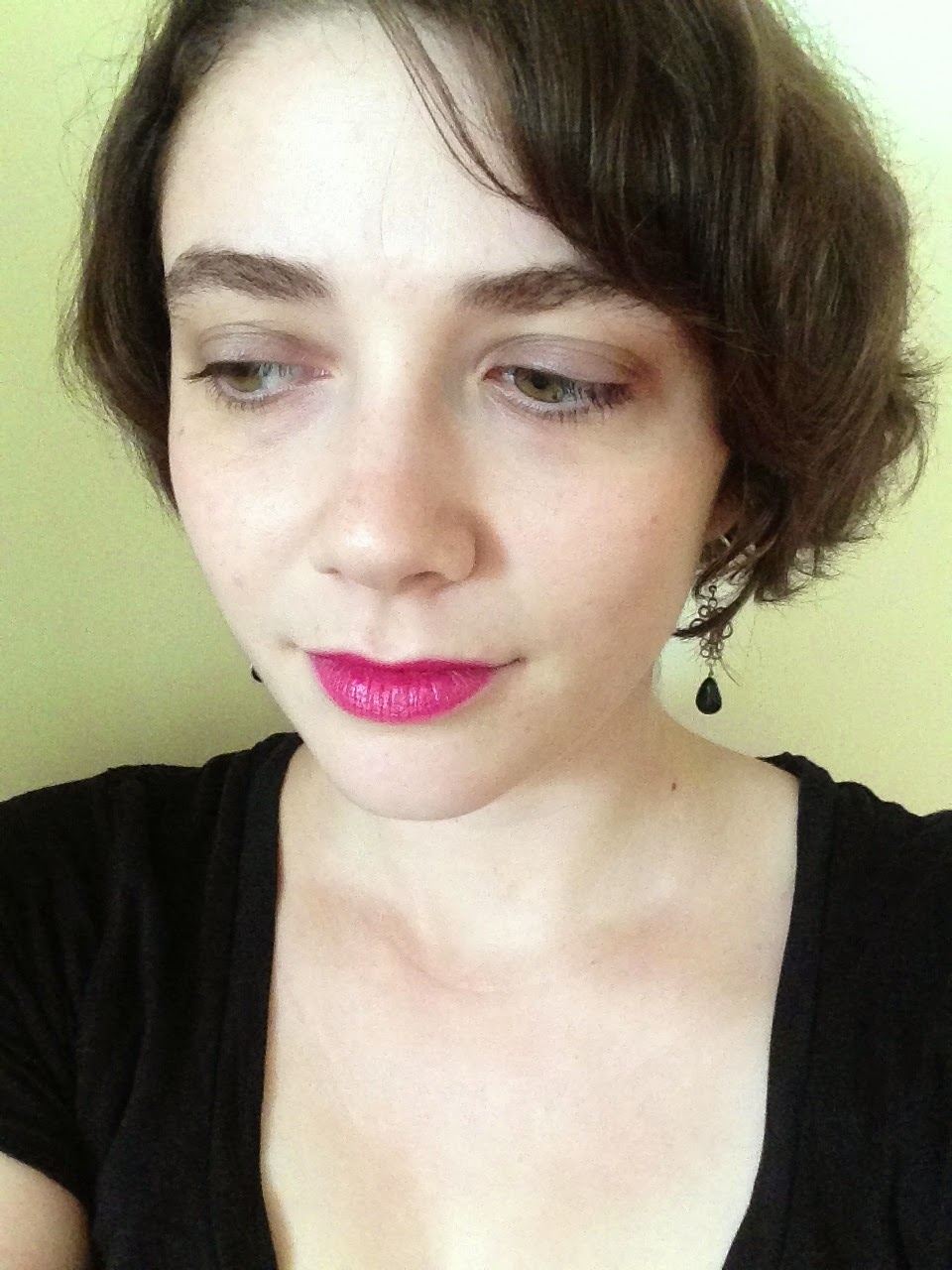 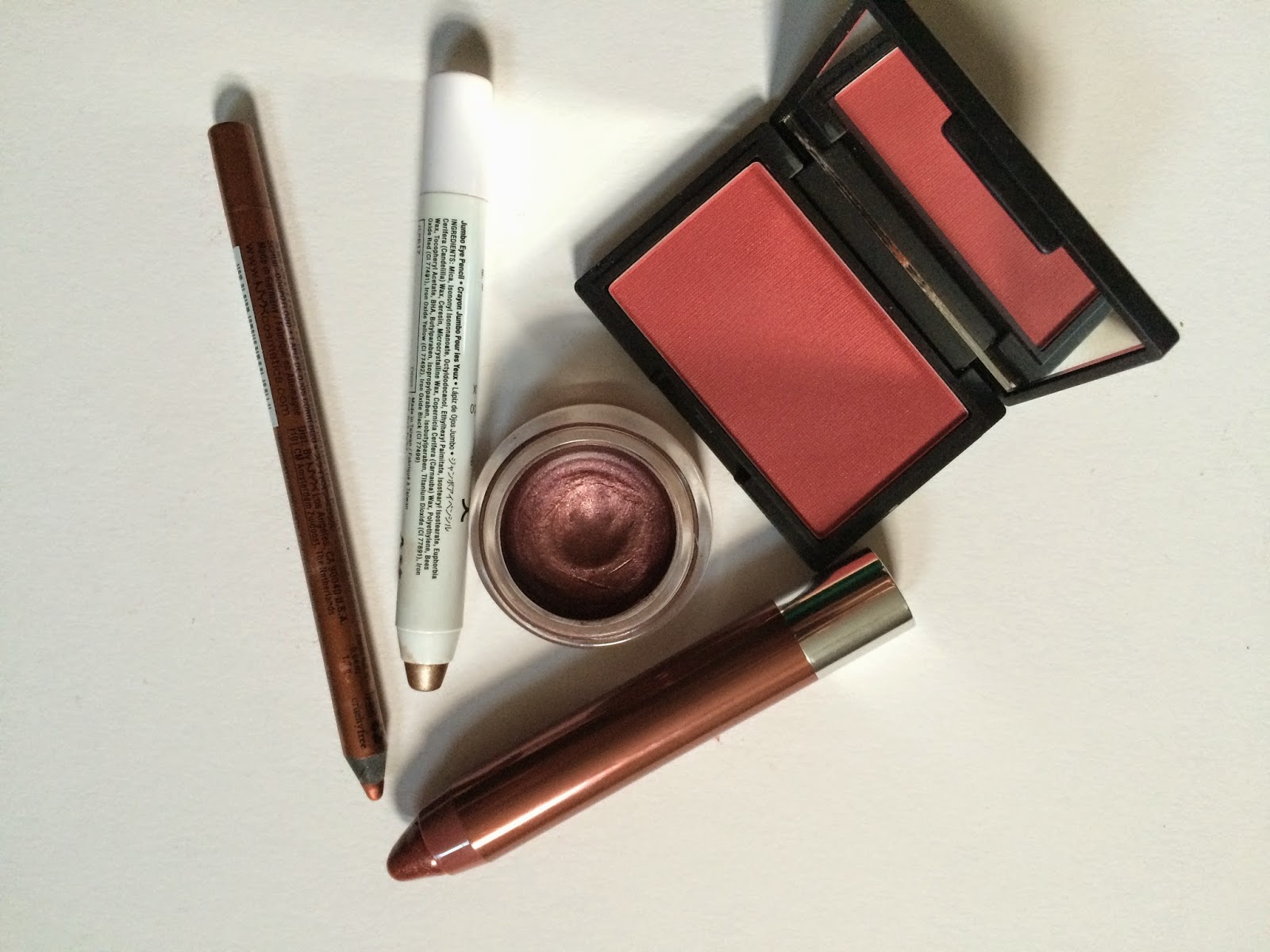 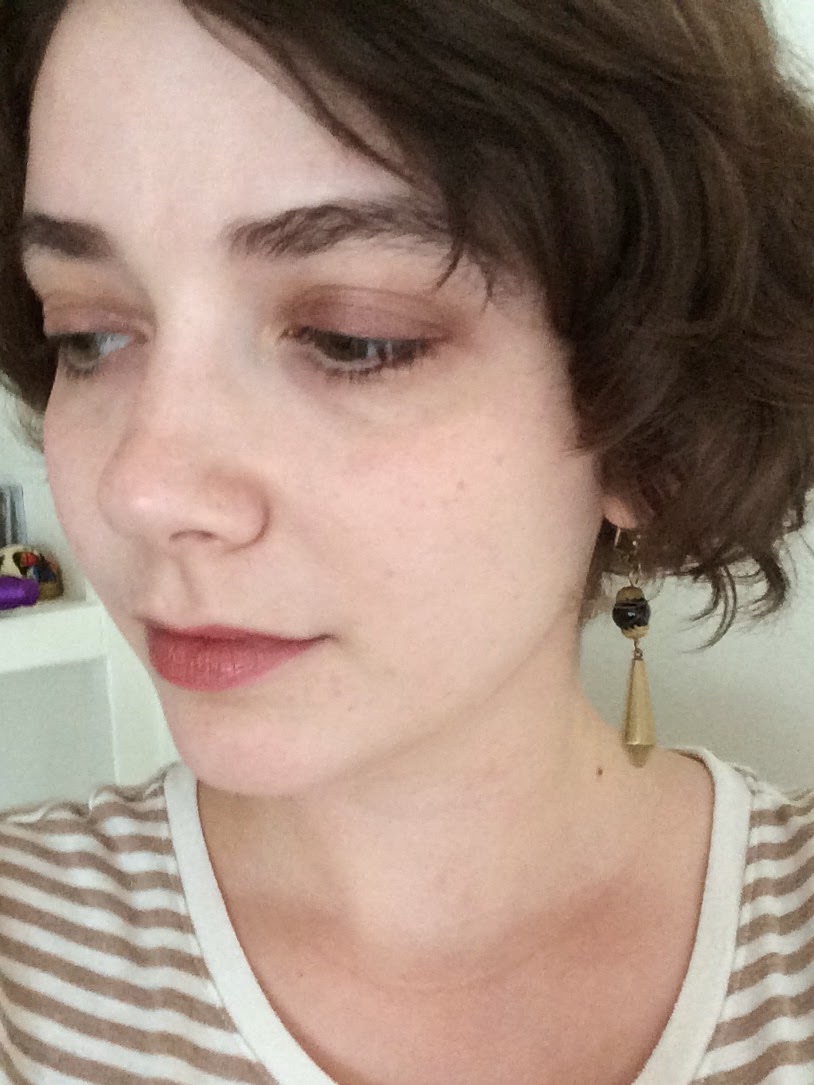 Looking at this photo now, I wish I'd built up the colors for more definition, or at least lined my upper lashlines. As it is, the products blur together into a plummy brown haze. Though I can't get over how pink Coy looks on my lips!

After a week or two of neutral eyes, I felt like experimenting. I used Maybelline Color Tattoo in Tough as Taupe as a base, then blended Milani Bella Rouge, a metallic fuchsia, into the center of each mobile lid, and finished with theBalm Serious, a matte black, on my upper and lower lashlines. I added MAC Up the Amp lipstick and NARS Mata Hari blush. Now that fall has arrived and the humidity isn't above 85% every day, I've settled back into my Mata Hari rut. It's such a perfect cool pink. Closeup of the eyes:

Because it's balanced between purple and pink, Up the Amp can look either vernal or autumnal; it all depends on what colors you use to set it off. The addition of Mata Hari and Bella Rouge gave the look a springier vibe than I'd intended. Oh, well. 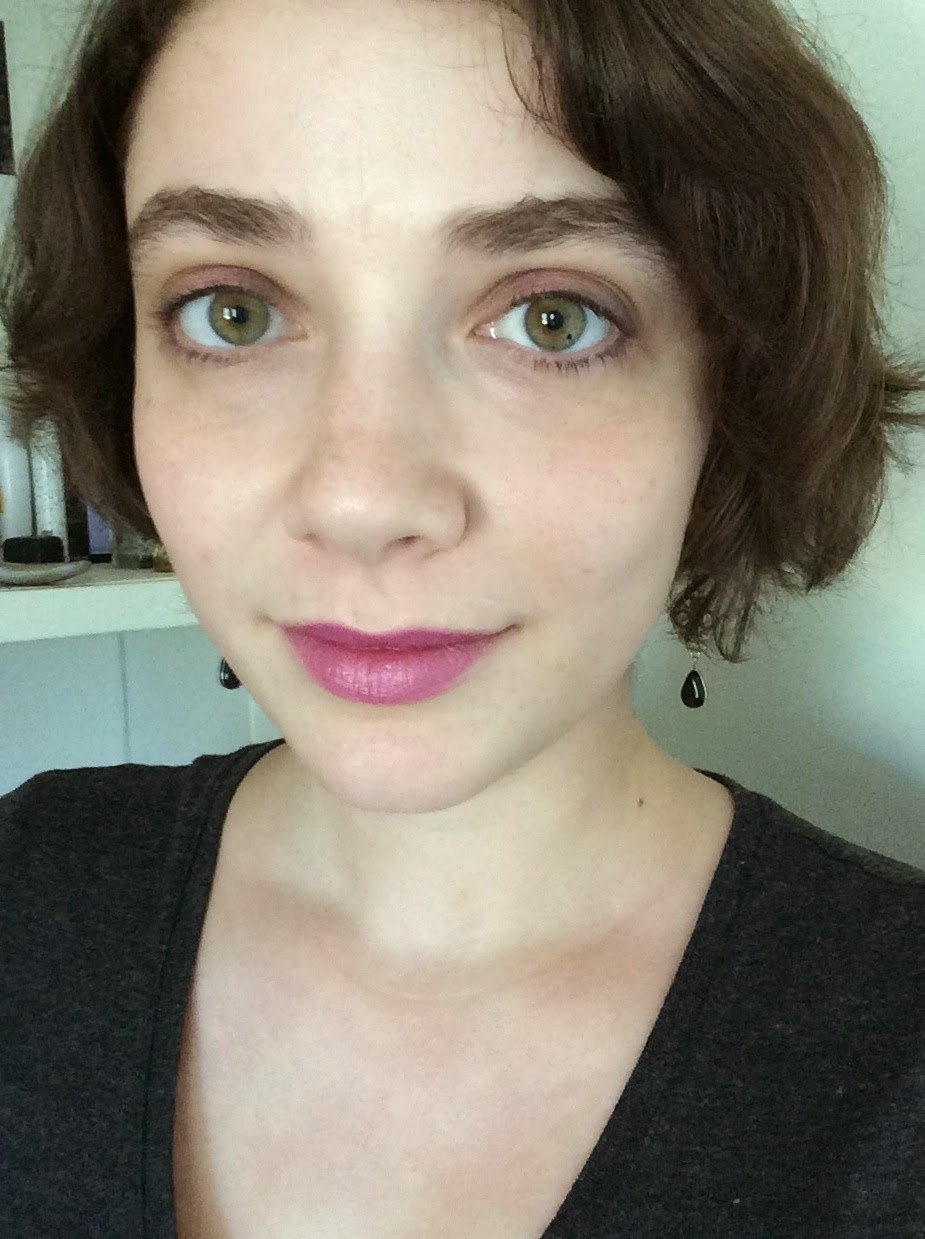 Unfortunately, Bella Rouge began to fade within an hour, and looked horribly patchy after two--and it was layered over a cream eyeshadow that usually has no trouble securing powders to my lids. I've said it before, but I might as well reiterate: I am so done with drugstore eyeshadows. That is, until I finally make it to Japan and get my hands on some Visée.

I was going to attend an academic talk followed by dinner with the speaker, other graduate students, and a professor. I also wanted to wear red lipstick. In a perfect world, the desire for knowledge and the desire for red lips wouldn't come into conflict, but my department is rather, howyousay, buttoned up. And my specific subfield is even more buttoned up, and the men in my subfield vastly outnumber the women, and the few women who attend talks wear little to no makeup, because we're all Serious Scholars. With these restraints in mind, I chose the most subdued of my opaque red lipsticks: NYX Matte Lipstick in Alabama. A brick-red matte lipstick isn't flirty or vampy or playful; it means business. I also used NYX Iced Mocha and theBalm Sleek on my eyes and Mata Hari on my cheeks. 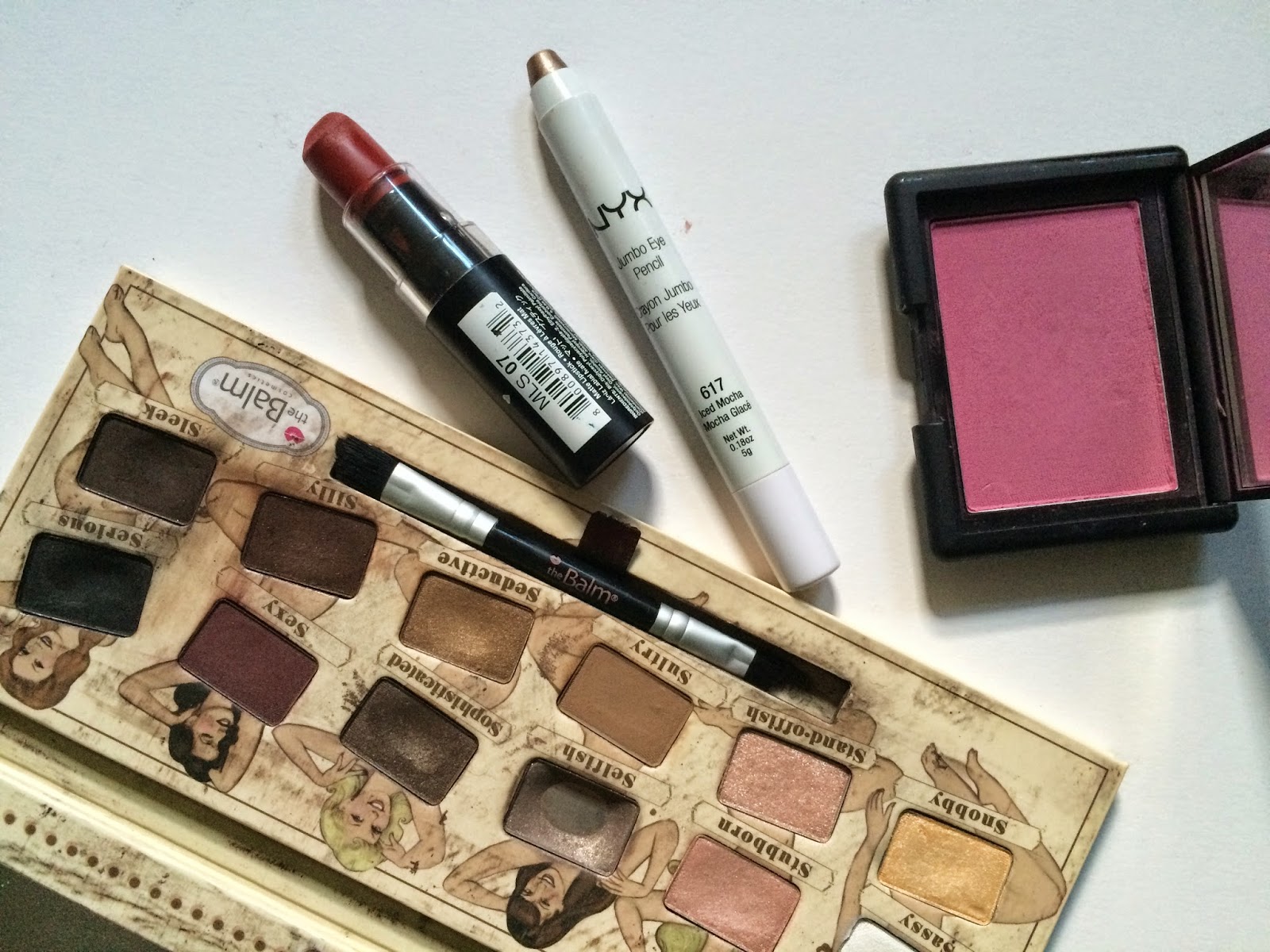 All this was in the service of coordinating with my houndstooth skirt from J. Crew, the only new piece of clothing I've allowed myself this fall. Overexposed library-carrel selfies are so grad school. Gradcore, if you will. 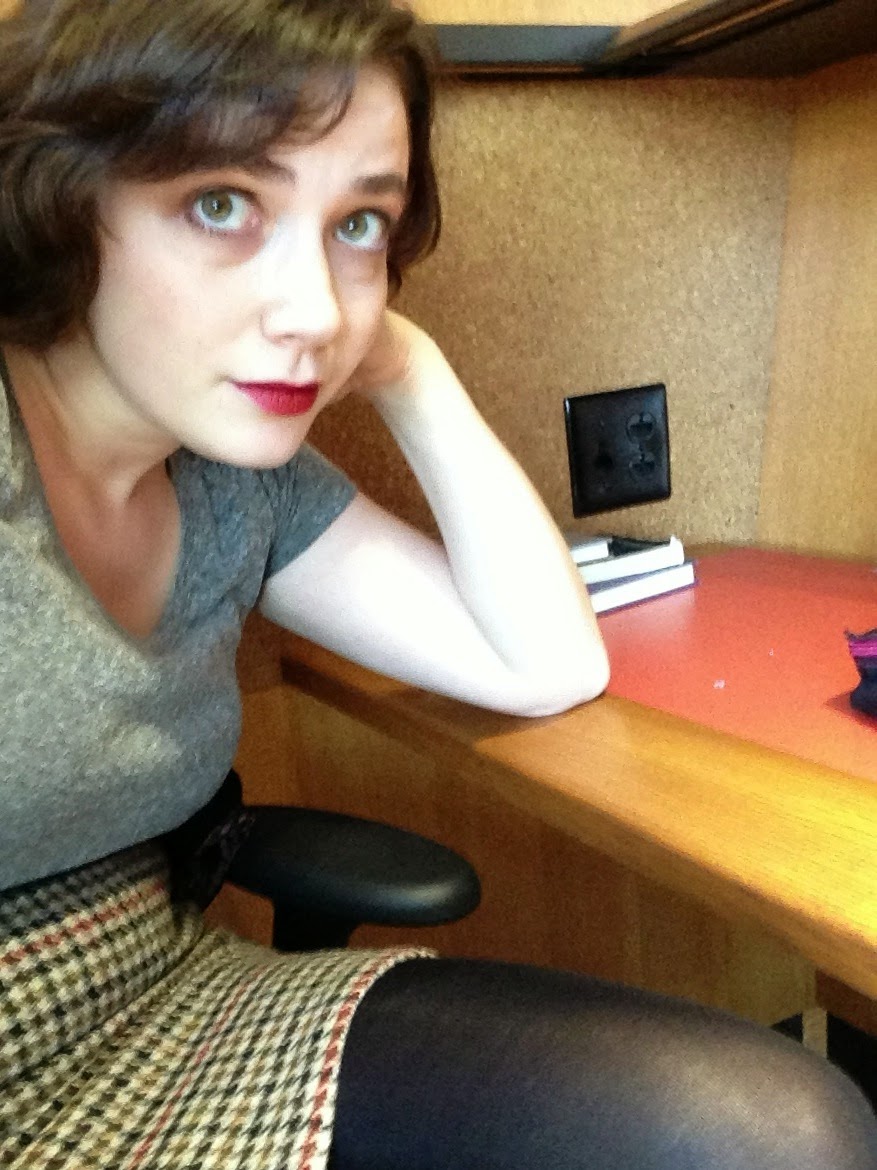 I was wearing bright green jeans, which were a lot of look in themselves, and I didn't want my makeup to compete. I also feared that any lipstick close to red would make me look like Christmas. I used three colors that look very different in the tube/pan but harmonize surprisingly well on the face (purple is the key): NARS Coeur Battant, Revlon Coy, and NYX Slide-On liner in Jewel, a plum with pink sparkles. Since my eyes and lips were relatively subdued, I used more blush than I normally would. 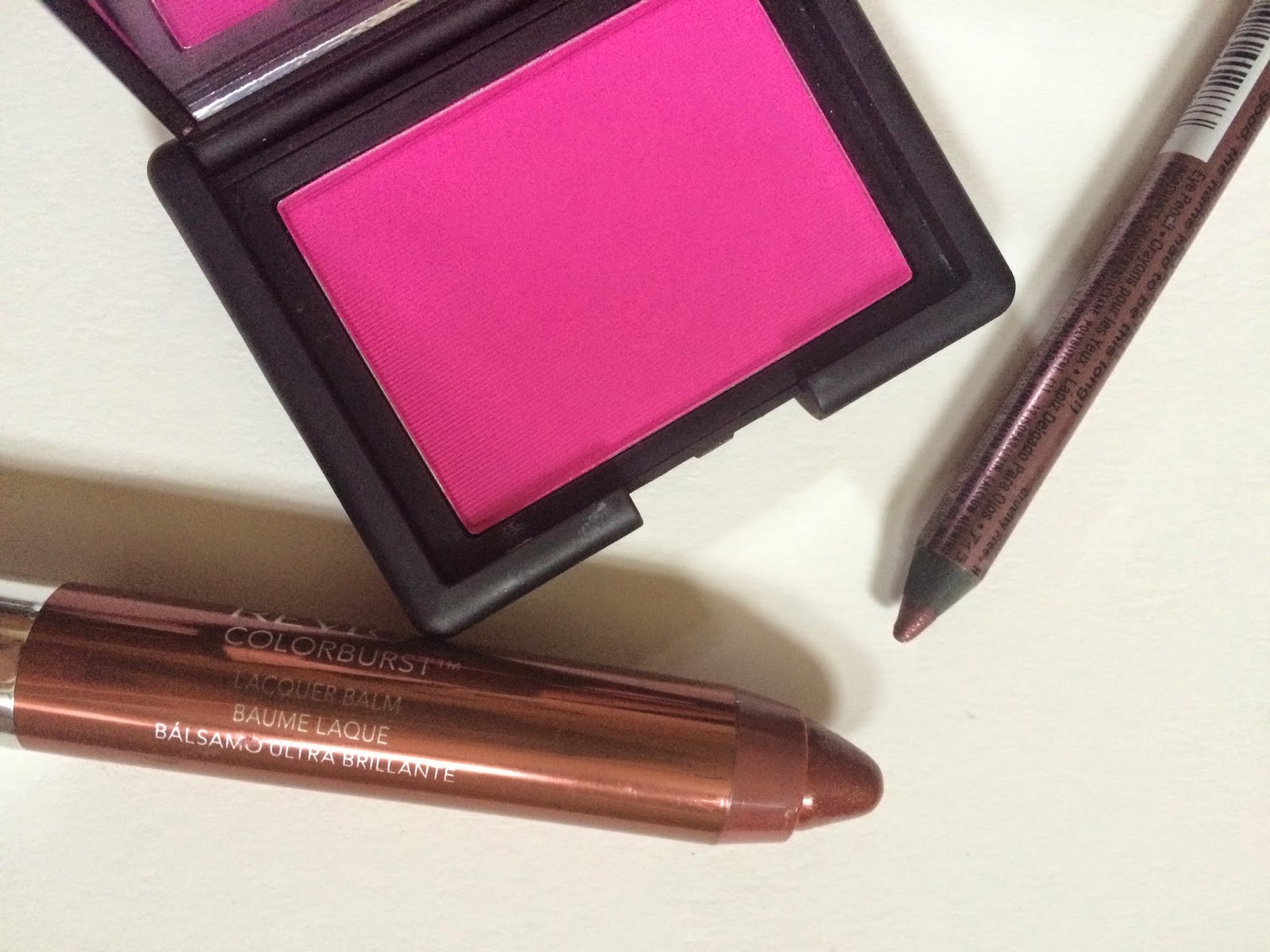 These colors seem very different from one another in the pan/tube/stick, but swatches tell another story. Coeur Battant is very cool, Coy is warm, and Jewel bridges the two temperatures nicely. 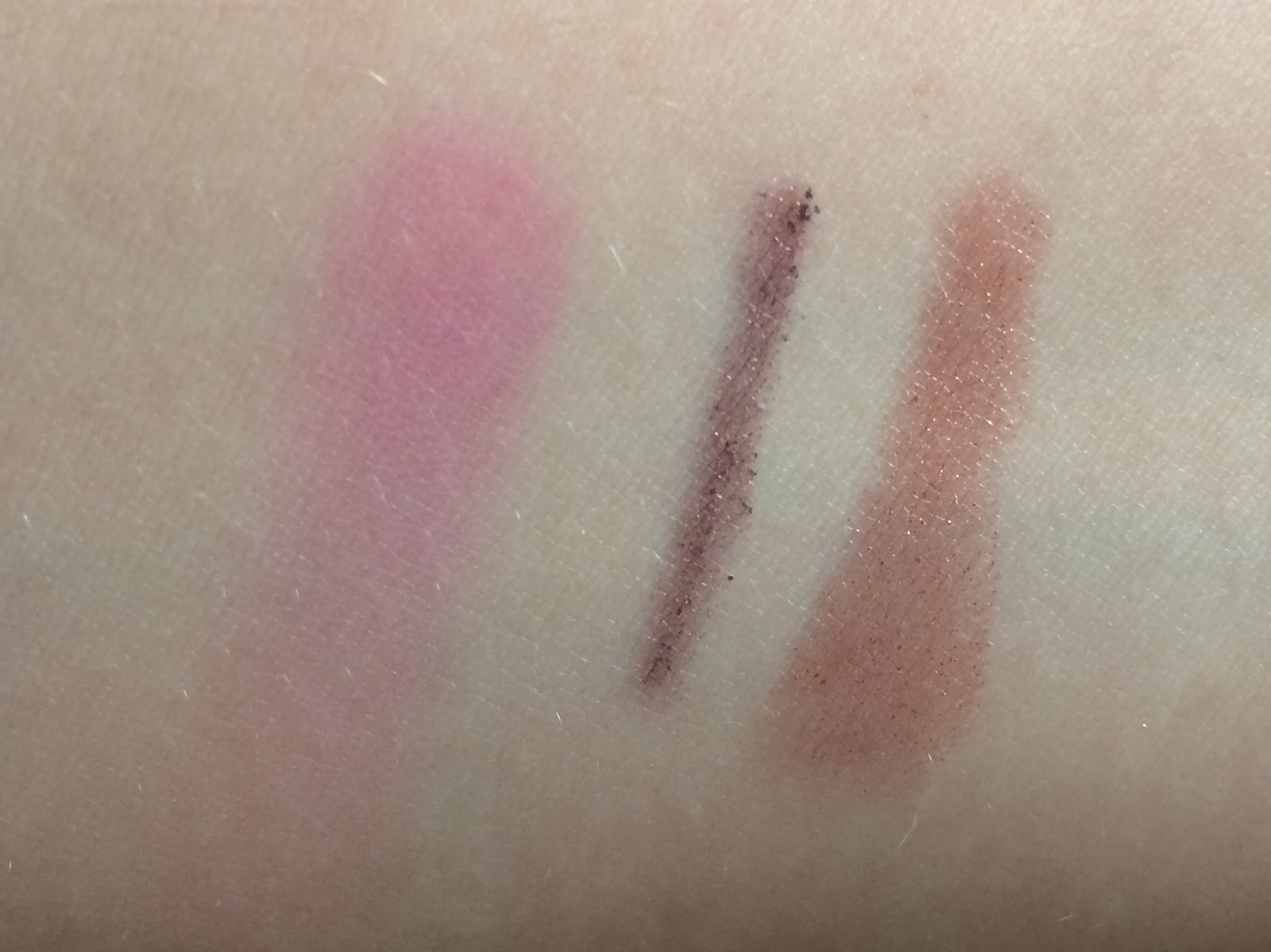 Supercloseup to catch the blush on camera: 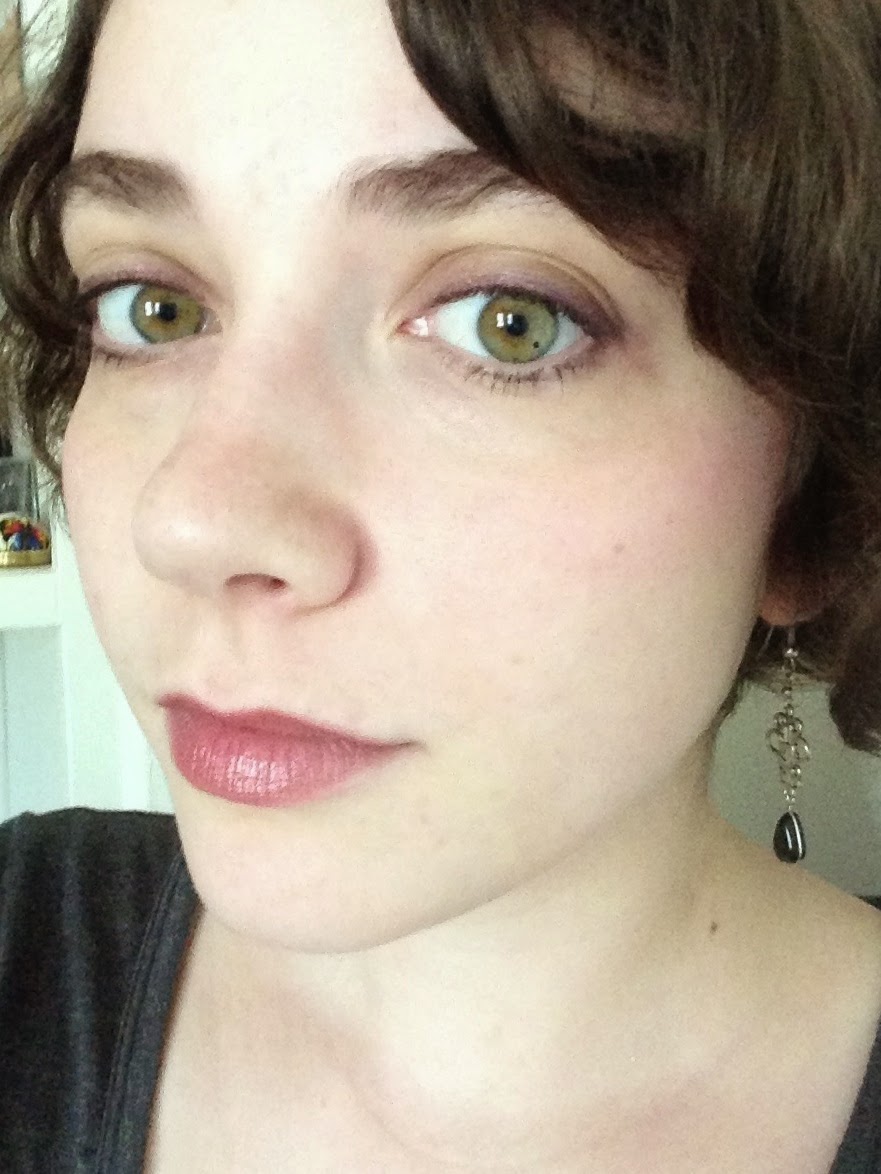 Jewel is a pretty color, but it fades quickly and produces a lot of glitter fallout. Let me rephrase my resolution of the 19th: I am so done with drugstore eye makeup in general. I need some higher-quality basics.

Whenever I wear my navy turtleneck, I try to make myself look as much like a '90s grad student as possible, which usually means dark brownish-red lipstick. This time I used Revlon Lip Butter in Red Velvet, along with Maybelline Color Tattoo in Bad to the Bronze, NYX Golden Bronze liner, and Illamasqua cream blush in Zygomatic. 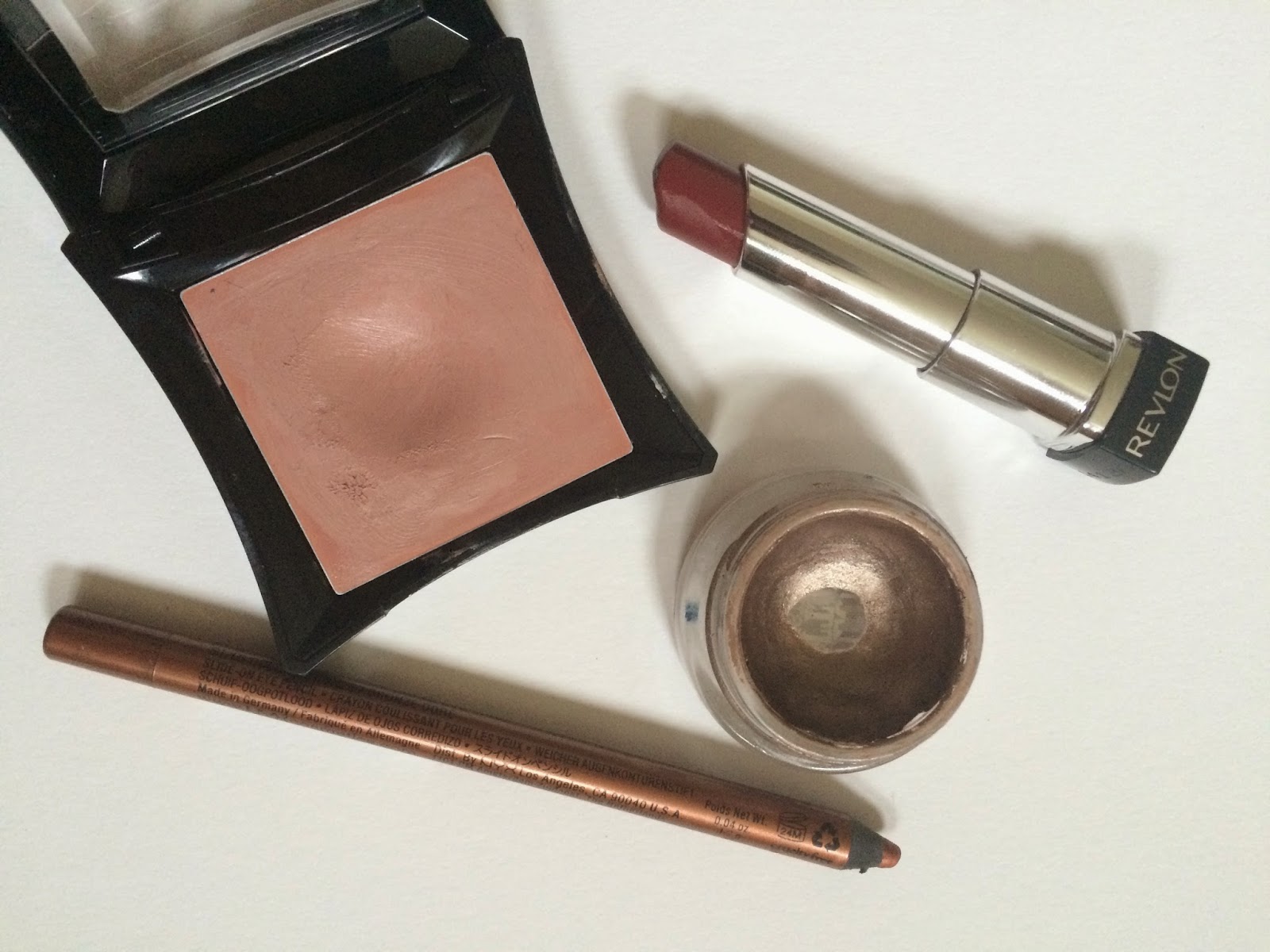 Bad lighting is bad: it was raining all day. This was the day I finally submitted my application. I made a celebratory drink, but fell asleep before I'd finished half of it. 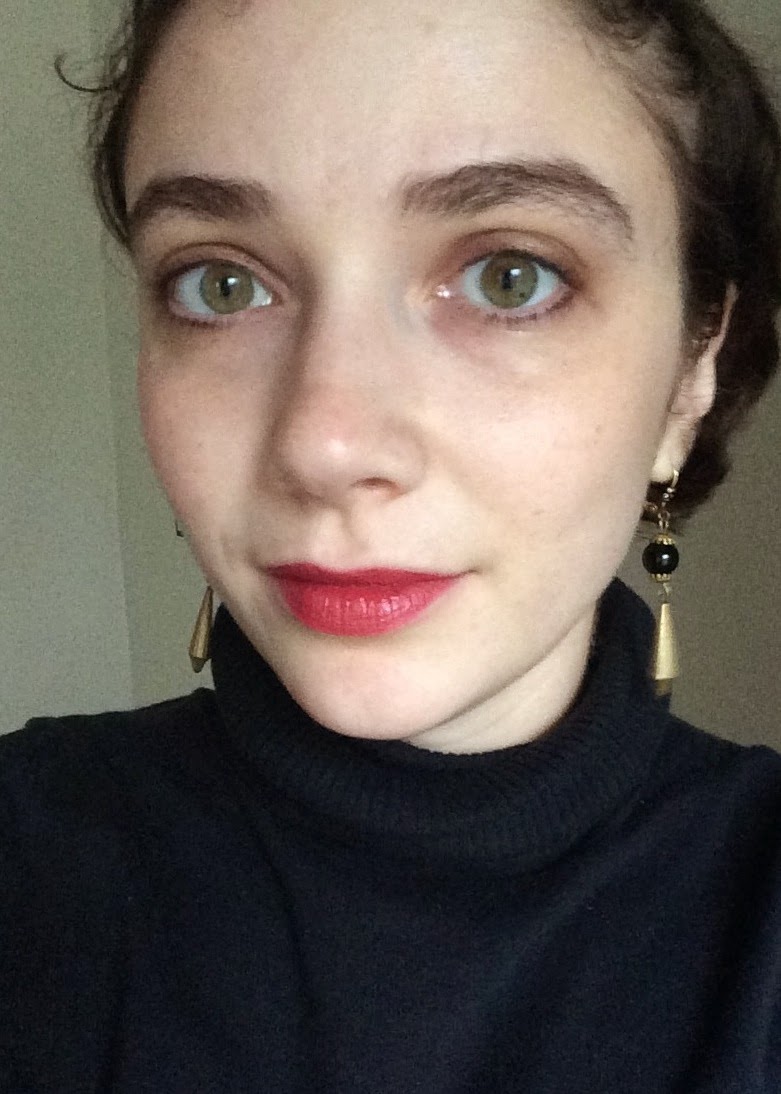 It's still raining today, but I'm in a much better mood. It's good to be back.
Posted by auxiliary beauty at 3:20 PM