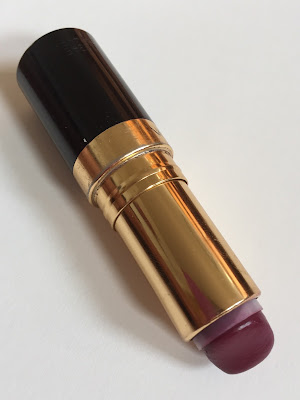 I feel a missionary zeal building in my breast as I write this post. Plum Velour is one of my most beloved lip colors, but it's sadly underappreciated. In fact, I think Revlon's Shine lipsticks are sadly underappreciated in general. They came out in the spring of last year, but caused very little stir--nothing like the frenzy that greeted the Lip Butters or the Matte and Lacquer Balms. Part of the problem, I think, was that the Shine lipsticks didn't have a cute new design, which made them seem like an afterthought. They come in the same (dated-looking, in my opinion) black-and-gold tubes as Revlon's other Super Lustrous lipsticks, but the sticker on the bottom of each tube is shiny instead of matte. (As you can see, my tube of Plum Velour is well-loved indeed: during fall and winter, it rarely leaves my bag.) 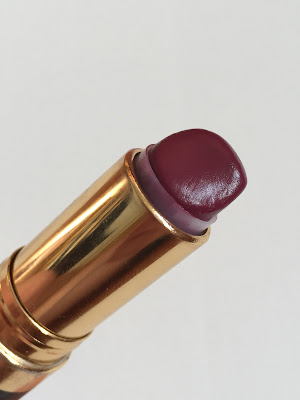 Revlon also did a bad job of communicating that the Shine lipsticks were meant to be sheer, so quite a few people complained about their lack of pigment and poor staying power. To avoid any further confusion, let's all acknowledge that these are in fact sheer lipsticks. They fade after a couple of hours. Don't expect a dramatic burst of color or a finish that stands up to food and drink. Plum Velour stops looking like a vamptastic dark purple once you swatch it. Left, one layer; right, two layers. 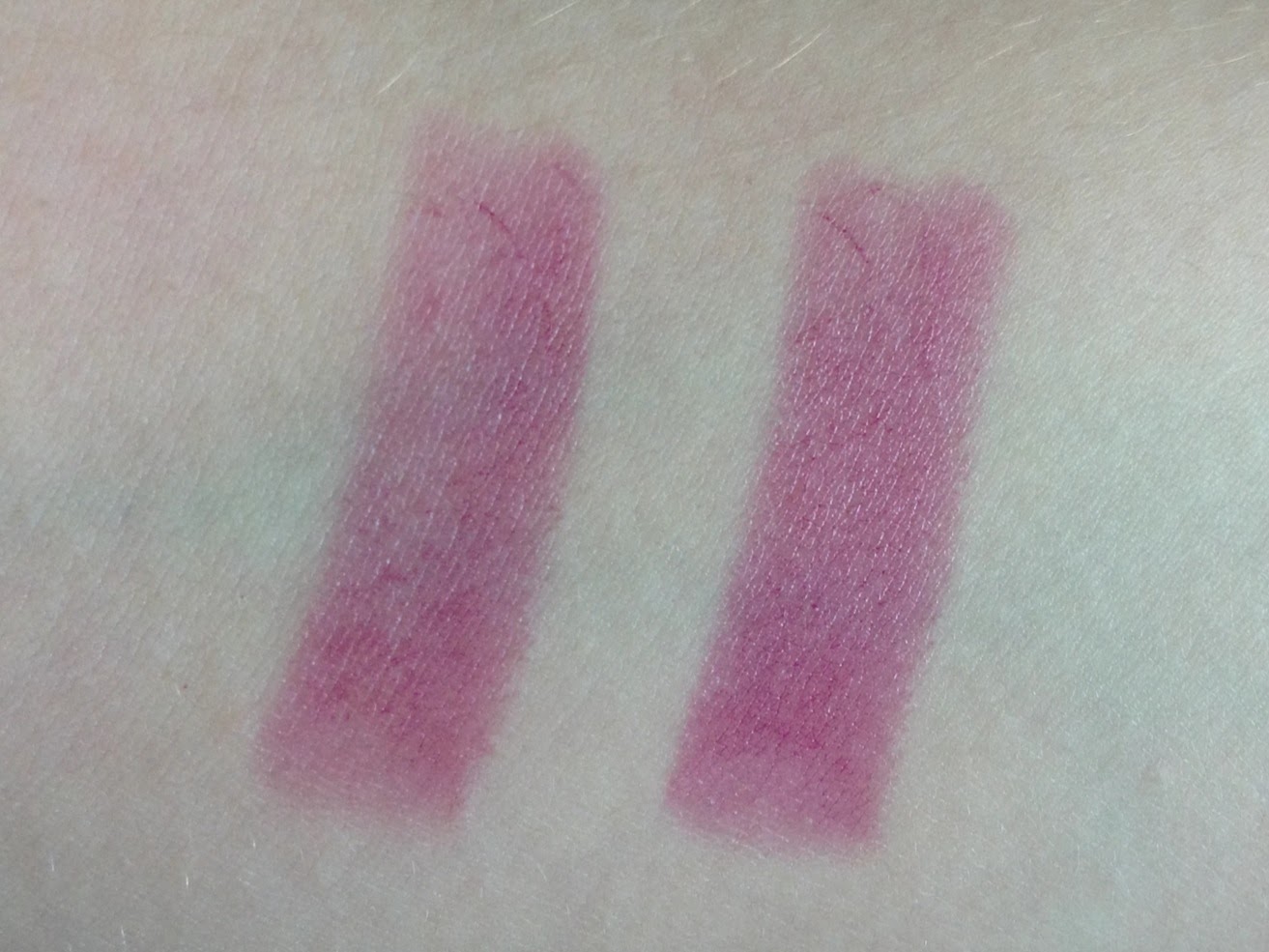 Revlon has long distinguished itself in the field of muted plummy lip colors, and it turns out that I own two Super Lustrous lipsticks that are quite similar to Plum Velour. Mauvy Night (left) is a dustier plum with brown and pink undertones; Berry Haute (right) is a brighter, truer purple. Mauvy Night is more or less opaque, but Berry Haute is almost as sheer as Plum Velour. 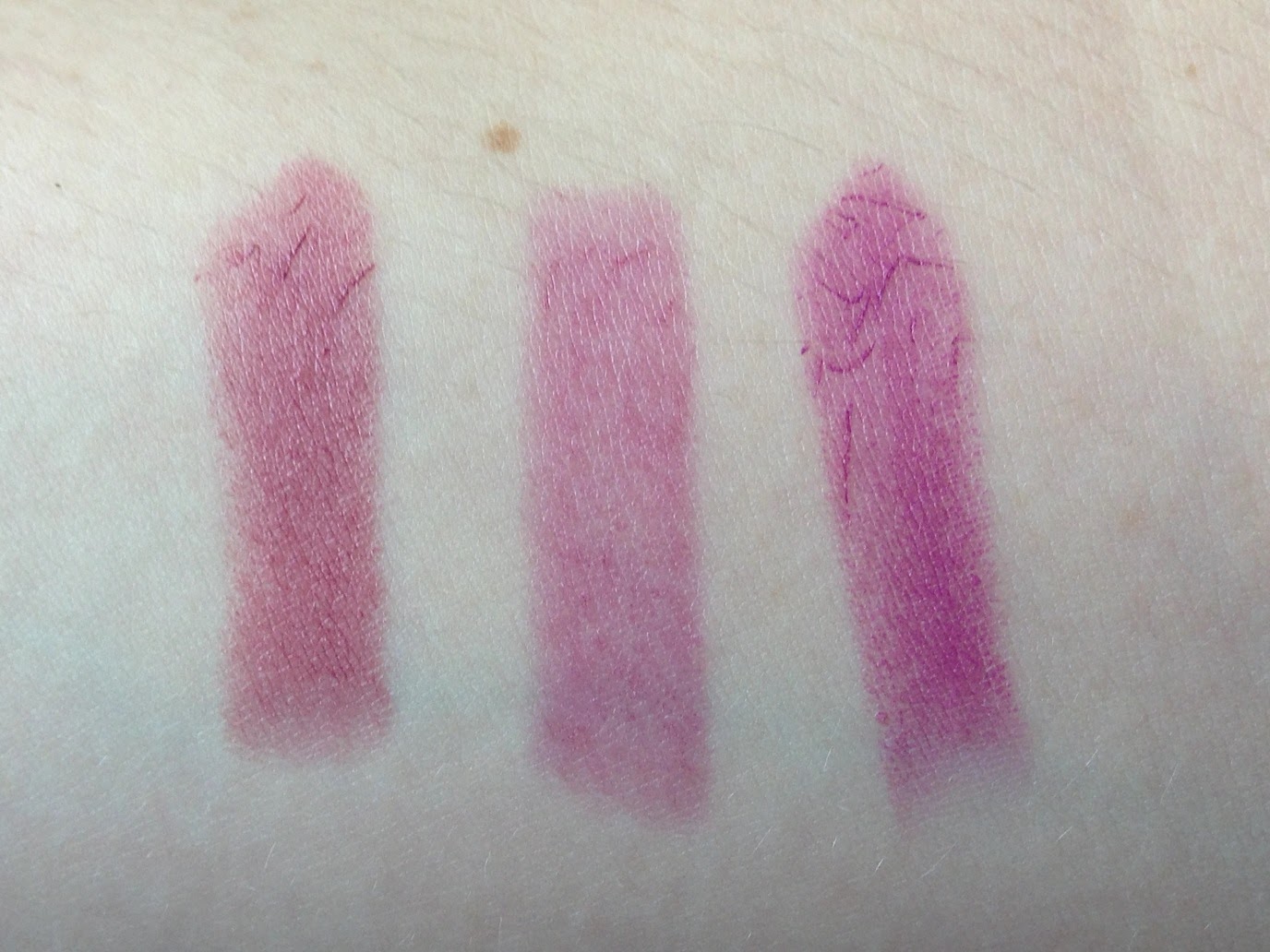 Plum Velour's formula is thin, slippery, and emollient; it feels like a water-based gel. That doesn't sound terribly appealing, but the lipstick is comfortable, even hydrating, on my lips. Top to bottom: bare lips (so dry, so sorry), one coat of Plum Velour, two coats of Plum Velour. 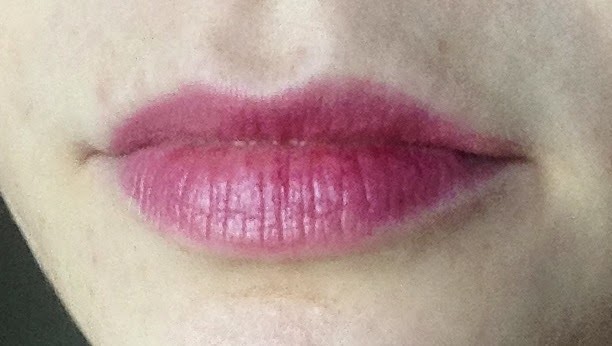 The shine wears off within a couple of hours, leaving a berry-pink stain. Reapplying the lipstick over the stain will make the plum color even deeper and richer. It really is a product that gets better as the day goes on.

But what if you want something more opaque? Well, if you're me, you can reach for one of your 586,734 opaque plum lipsticks. Or, if you're not me, you can layer Plum Velour over a neutral lip liner like Milani Color Statement Lipliner in Nude, a dark pinkish mauve. The Milani liner glides on more easily than Barry M Plum, but its finish is still very matte, and its color and finish together are exceedingly '90s. Top, Nude alone; bottom, Plum Velour layered over Nude.

Despite my newfound interest in lip liner and color layering, I think I'll always prefer the messier look of lipstick, sheer or opaque, on its own. But it's nice to have another option. 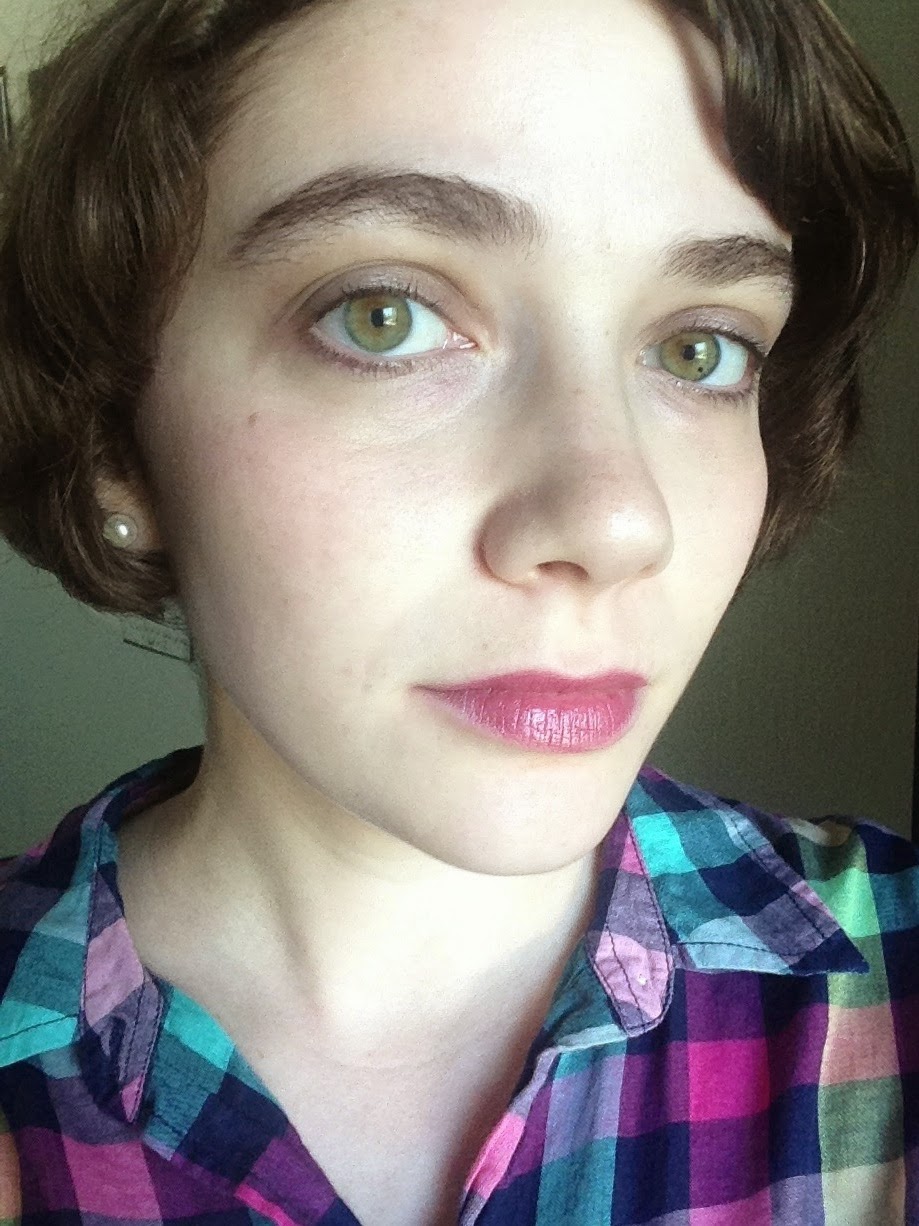 Same makeup, but outside, and with Milani Bella Charcoal in place of Lhasa. I am indeed carrying one bookbag on each shoulder. 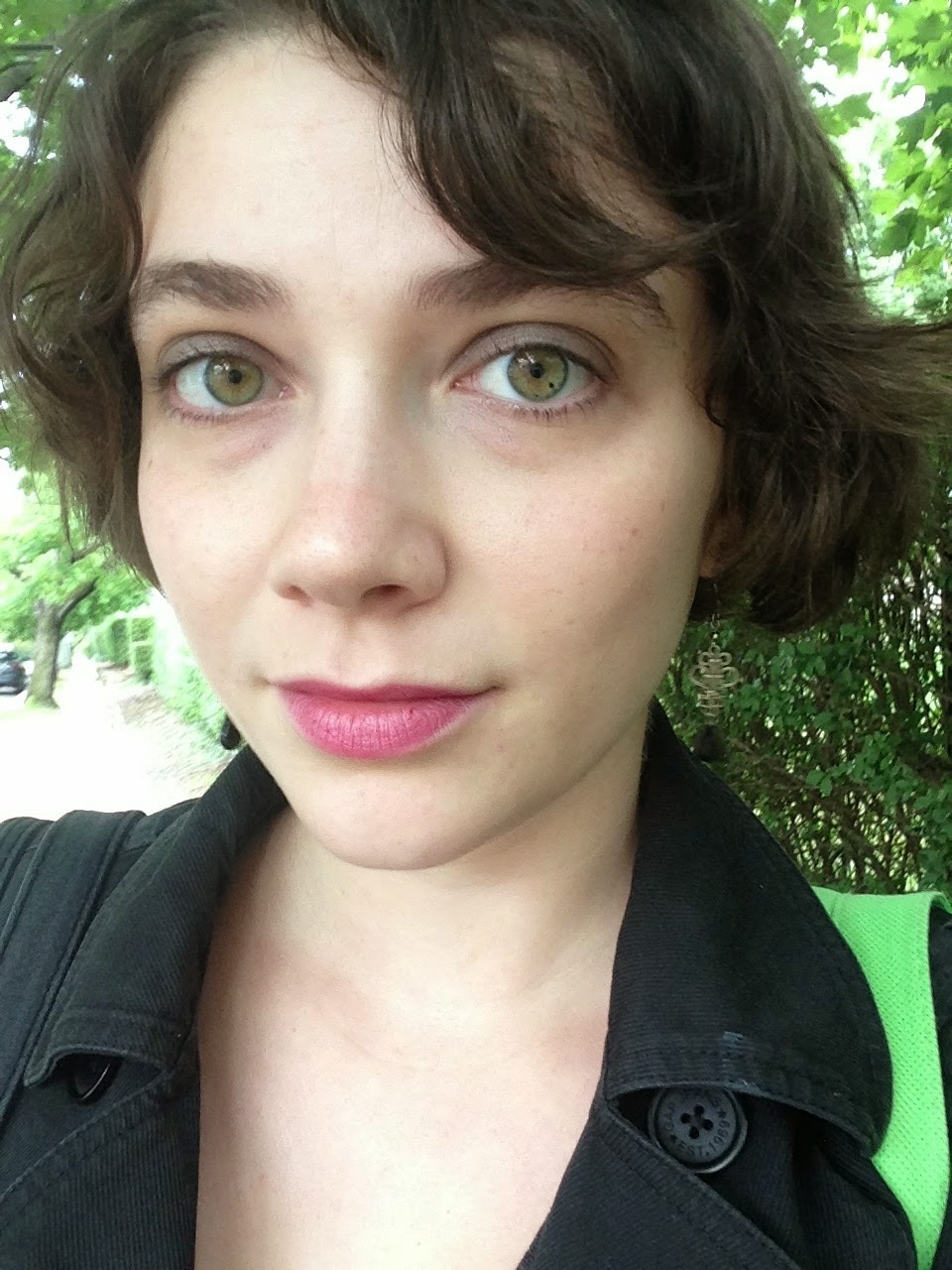 In short, Plum Velour is my cold-weather version of NARS Dolce Vita: comfortable, easy to apply, and suitable for all social situations. It's bold enough to perk up an otherwise neutral outfit, but subtle enough not to clash with brighter colors. Best of all, it never makes me look like I've tried too hard. And in academia, where women who put obvious effort into their appearance still attract the lofty side-eye of the patriarchy, a casual, unassuming lipstick is a nice thing to have.

Plum Velour is not a perfect lipstick, but I still prefer it to many of my bolder and longer-wearing lip colors. You know those books and movies that have made such a huge emotional impact on you that you'll always defend them fiercely, despite knowing deep down that they have significant flaws? That's how I feel about Plum Velour. I'll admit that it could last longer, in the same way that I'll admit that Nabokov's Ada, or Ardor could be less disgustingly self-referential or that Velvet Goldmine could have a more discernible plot. But also, I really don't care. For what I want Plum Velour (or Ada, or Velvet Goldmine) to do, it's perfect.

I haven't tried any of the other Shine lipsticks, but I'll almost certainly buy another tube of Plum Velour once I run out. Do you have any experience with the Revlon Shine formula? And what imperfect book or movie or beauty product will you always stand up for?
Posted by auxiliary beauty at 11:13 AM