FOTD: A Discourse of Auxiliary Beauty, or Artificial Handsomeness

Toiling in the knowledge mines, one occasionally comes upon some fascinating gems. Or, more prosaically: I typed the phrase "auxiliary beauty" into Early English Books Online to see what would pop up. For those of you who aren't pursuing graduate degrees in early modern literature, EEBO is a database containing almost every work printed in English between 1423 and 1700. Let me impress the coolness of this upon you: you can download facsimiles of entire Renaissance books (provided you or your institution has a subscription). You can also search for words or phrases throughout a given period: I'd originally found the phrase "auxiliary beauty" in a slang dictionary from 1699, but I wanted to see if any other writer had used it. As it turned out, the earliest printed text in which it appeared was John Gauden's A Discourse of Auxiliary Beauty. Or Artificiall Hansomeness, from 1656. 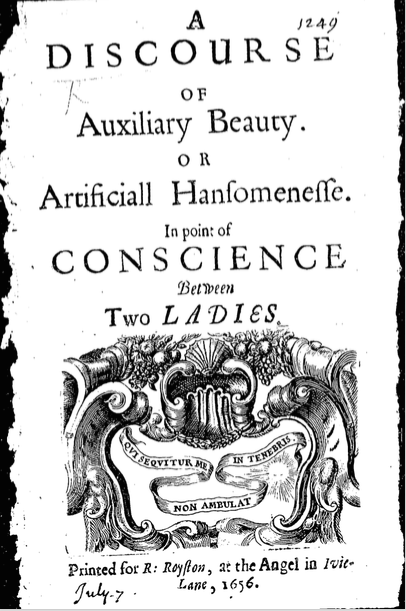 What was happening in 1656? Quick history lesson: England had been intermittently at war for fourteen years. Parliament had deposed King Charles I in 1642 and executed him in 1649; after four years of parliamentary government (the first departure from monarchy in English history), Oliver Cromwell took power as Lord Protector of England in 1653. He died in 1658, leaving a power vacuum imperfectly filled by his son Richard. The English had had enough of political experiments, and two years later, Charles I's son returned from exile in France to claim the throne. The reign of Charles II, known as the Restoration period, lasted from 1660 to 1685.

All this turmoil had a profound effect on popular culture. Parliament was controlled by radical Puritans who disliked the ostentation of the established Church of England and the splendor of Charles I's court. (They closed London's playhouses in 1642, believing that the contemporary theater, featuring plays with titles like 'Tis Pity She's a Whore, posed a danger to public morality.) The period between 1642 and 1660 has a reputation for drab austerity, especially compared with the decadence and libertinism of the Restoration, but A Discourse of Auxiliary Beauty reveals that self-adornment was alive and well.

The book is written as an exchange of letters between two fictional ladies, one of whom is scandalized that the other uses "some colour or tincture to advance your Complexion; which indeed I take to be no better, than that odious and infamous way of Painting; every where in all ages so much, and so justly spoken against by God, and good men." Given the tone of other early modern discussions of makeup (such as The Character of a Painted Woman, which I mentioned in an earlier post), you might assume, as I did, that the dialogue ends with the rouge-loving lady vowing never to tincture her face again. Far from it! Instead, her high-minded friend is forced to admit that cosmetics "may (no doubt) be as easily kept in all sober, civill, and harmlesse bounds, as any other things, by which art assists nature." John Gauden was a clergyman who later became Bishop of Worcester, so it's even more remarkable that he took such a levelheaded view of auxiliary beauty. Good on you, sir. 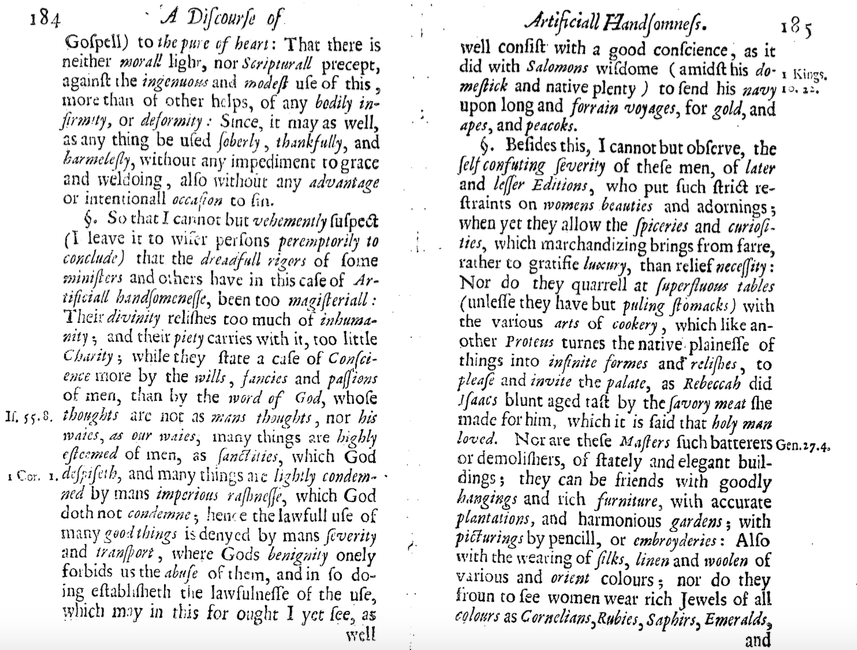 "I cannot but observe, the self confuting severity of these men…who put such strict restraints on womens beauties and adornings; when yet they allow the spiceries and curiosities, which marchandizing brings from farre, rather to gratifie luxury, than relief necessity…nor do they froun to see women wear rich Jewels of all colours as Cornelians, Rubies, Saphirs, Emeralds, and Dimonds, on their brests, necks, eares, wrists and fingers…As these fixed gemms have their aptitudes for our use on other parts of our bodies; so truely have other diffusive tinctures, and colourings, their fitness and almost propriety for the face; if they bee discreetly applied."

What did "artificial handsomeness" look like circa 1656? For our case studies, let's examine portraits of three notable women from the mid-17th century. First we have Henrietta Maria (1609-1669), queen consort of Charles I. Reviled by Parliamentary sympathizers and almost deified by royalists, Henrietta Maria was a French Catholic; she fled to Paris in 1644 and established a court in exile, where her son Charles II came of age. Henrietta Maria was a renowned beauty, and her portraits depict her dressed and adorned in the height of fashion, her lips and lower cheeks reddened slightly. John Gauden would approve: this, surely, is makeup "discreetly applied." 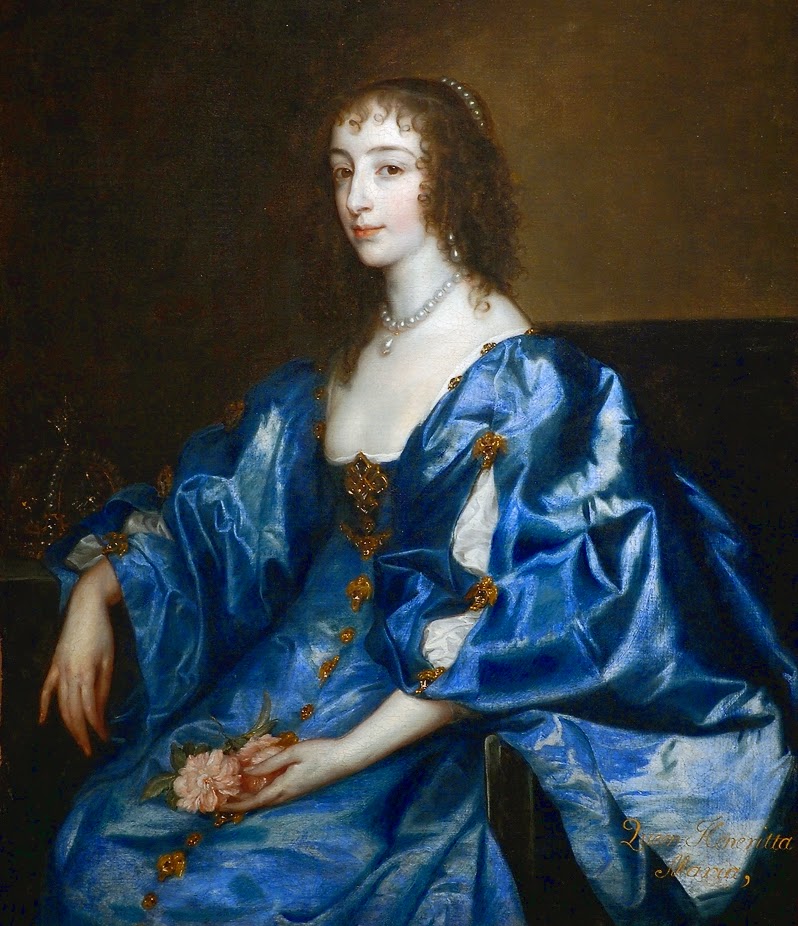 In the next portrait of Henrietta Maria, the colors are brighter, but the effect is the same: lots of warm pigment concentrated on the lower half of her face, as if a flame is burning just below her chin and the warmth hasn't yet reached her cheekbones. 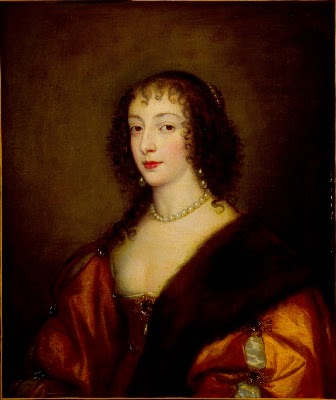 Our next lady is also connected to the English royal family, but in a less savory way: she's the mistress of Charles II. Louise de Kéroualle (1649-1734), daughter of a Breton noble family, attracted Charles's attention in 1670 when she came to England as a lady-in-waiting to his sister Henrietta. After Henrietta's death that year, Charles, acting entirely from the disinterested goodness of his heart, made Louise a lady-in-waiting to his wife Catherine. 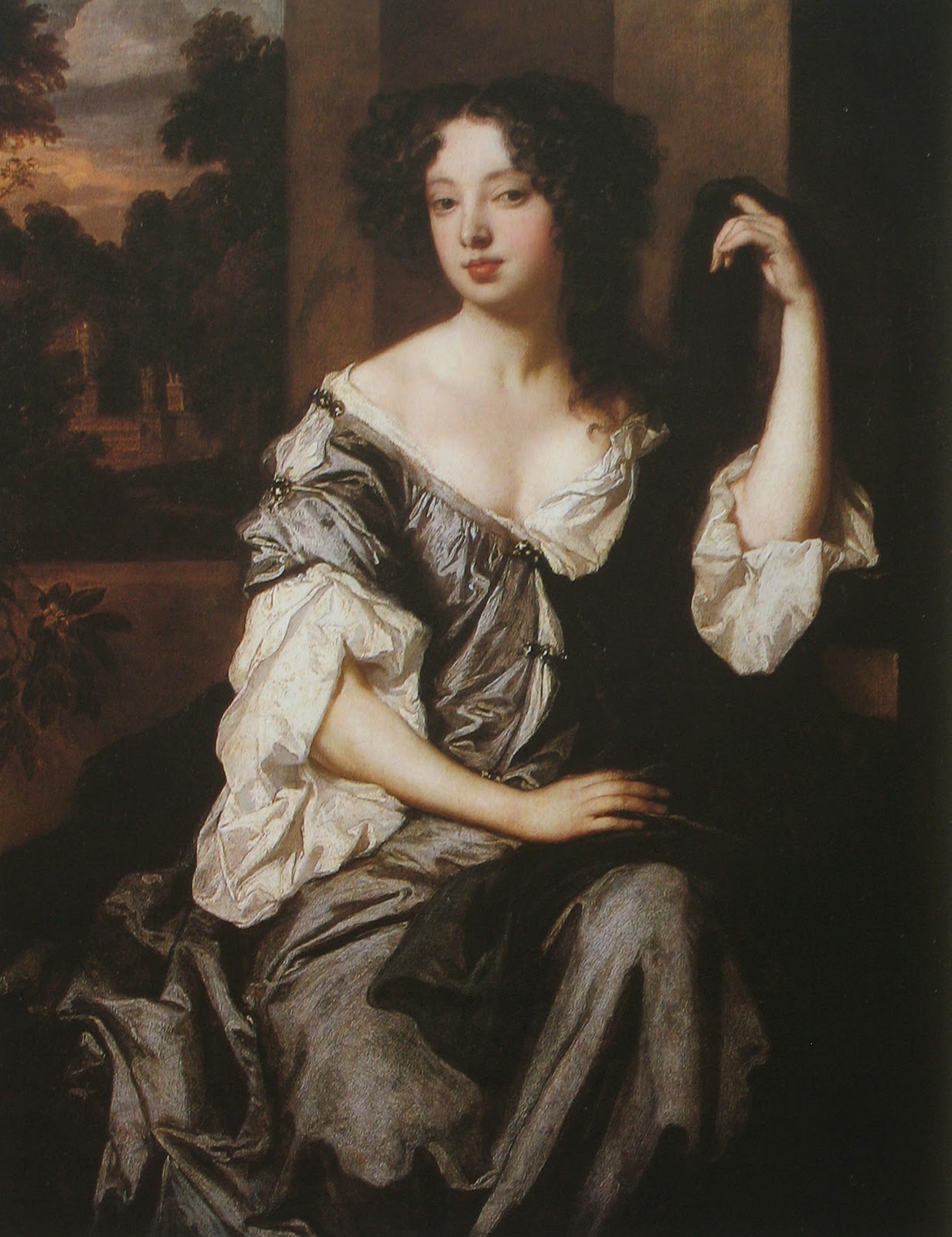 This portrait was painted a few decades after that of Henrietta Maria, but Louise's makeup is similar: orangey-red lip pomade, warm pink pigment on the lower cheeks. The only difference is that the cheek color suffuses a larger part of her face, creeping downward toward her chin.

Finally, we have Louise's rival: Nell Gwyn or Gwynne (1650-1687), another royal mistress. Born to a humble family in London, she sold oranges in the flourishing playhouses of the 1660s before becoming an actress. A series of liaisons with Restoration rakes and wits ended in her installment as Charles's mistress in 1668. With her colorful past and her bawdy sense of humor, she enjoyed great popularity both at court and in the popular imagination. (Rumor has it that when a crowd of people jeered her, believing her to be the Catholic Louise de Kéroualle, she replied: "Nay, good people, I am the Protestant whore.")

Here she is dressed as a shepherdess in a vaguely classical setting: 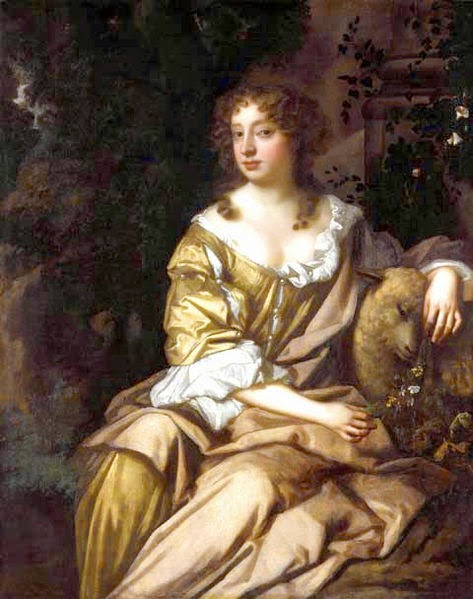 A less skillful portrait, an early example of the "tits or GTFO" motif: 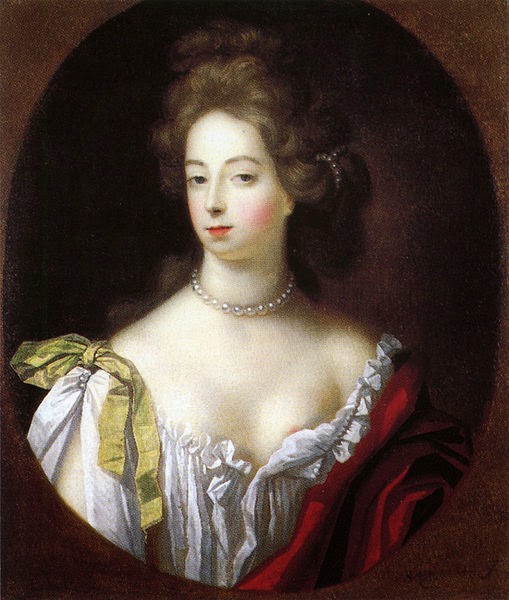 I think it's fair to say that Nell knew which was her good side.

All of these portraits display similar placements and colors: brows softly defined, lips stained coral-red, bright pink rouge applied low on the cheeks (though the size of the area covered seems to vary), and no eye makeup to speak of. I'm sure there's also some white face makeup in play, but surely my own winter pallor will suffice.

It's hard to find contemporary analogues for this makeup look. Low-placed blush is generally considered a faux pas, the rage for contouring has pushed the smooth baby-faced look out of fashion, and most women cling fiercely to their mascara. Still, I was able to find a couple of images for inspiration. I've been driving myself mad trying to locate their original sources (I found them on Pinterest, of course), but not even reverse-searching Google Images has helped. Ugh, I hate the Internet's tendency to make us all lazy about citing sources. I hate it!

Anyway, here's a peachy W cheek paired with a glossy gradient lip in a similar shade. Eyes relatively bare, except for black liner, mascara, and some particularly dead-looking circle lenses. 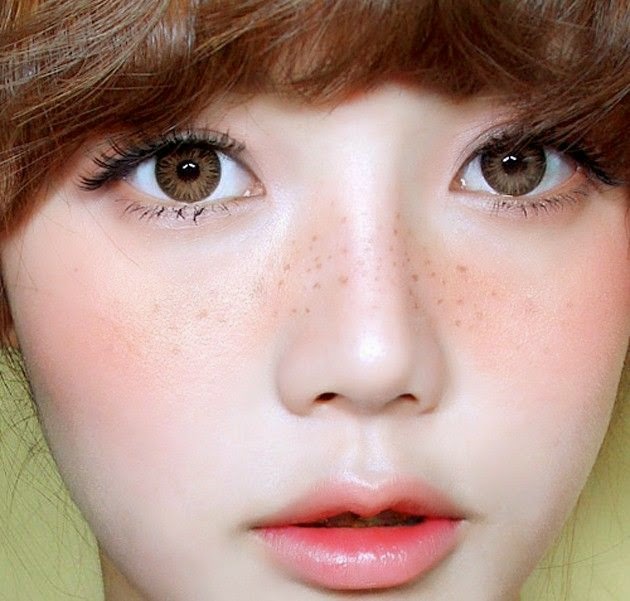 Subtler colors than queens and royal mistresses were accustomed to using, but similar placement, with a similarly bare eye: 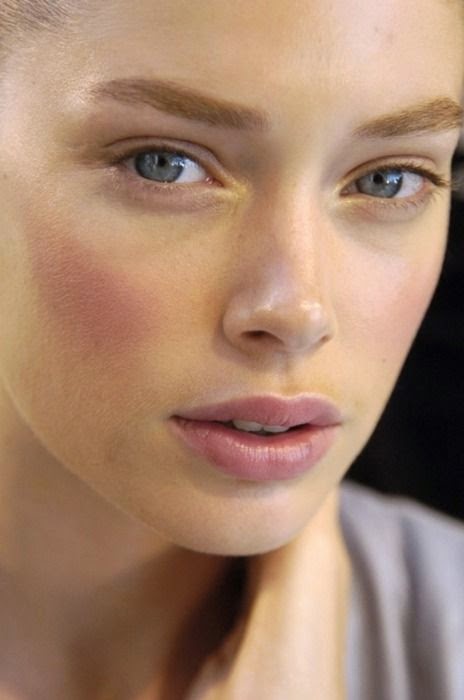 For my own attempt at Baroque beautification, I used concealer to achieve skin as smooth and shadowless as possible, then smudged theBalm Sleek eyeshadow into my brows and set them with Milani Clear Brow Gel. I don't have a warm pink blush in the shade that Nell and Louise seem to have favored, so I layered NARS Mata Hari, a cool plum-pink, over Sleek Life's a Peach, a soft orange. I used a lip brush to stain my lips with Revlon Fire and Ice, then patted the tube all over my mouth for a slightly shiny finish. 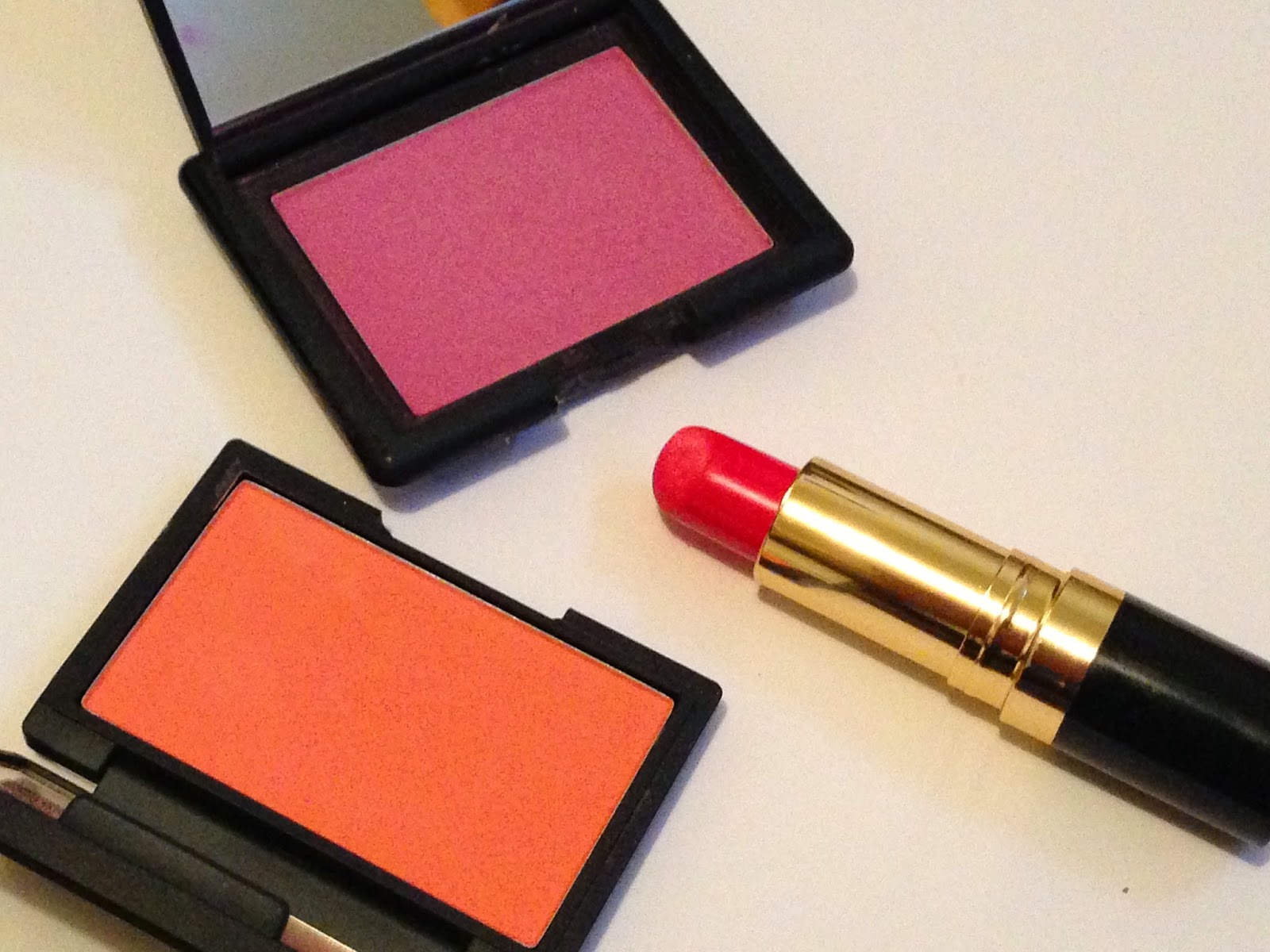 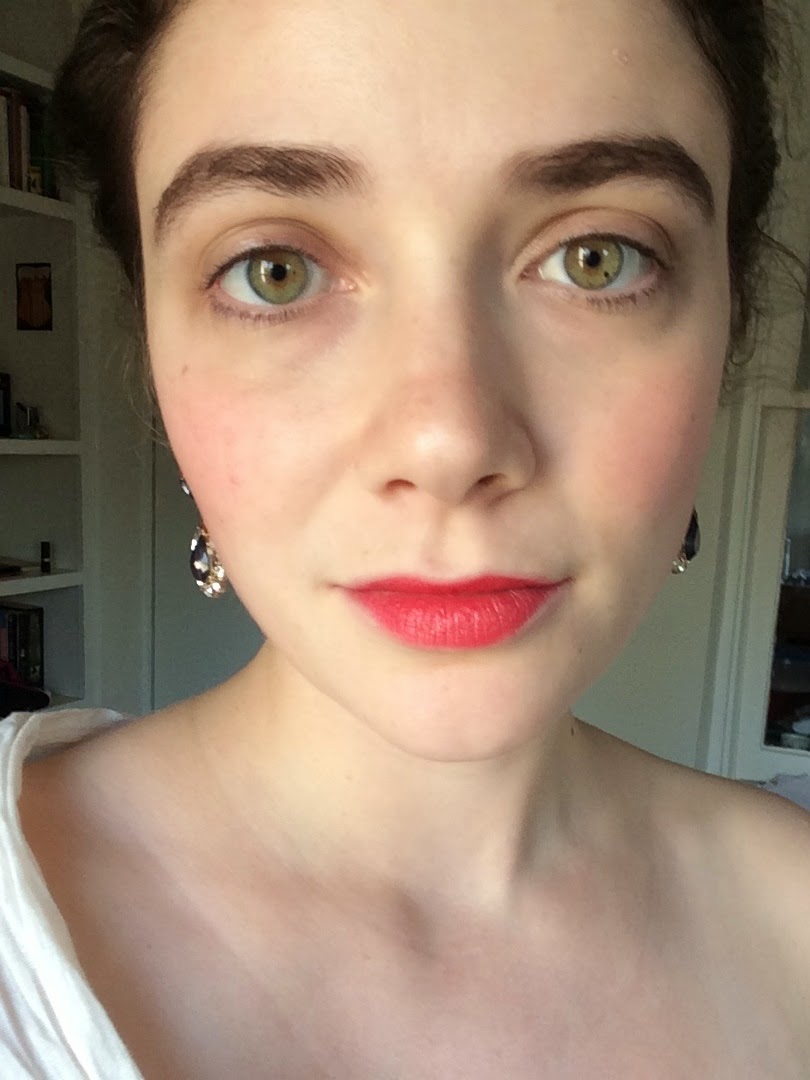 I like it! My brows provide some balance to the busy lower half of my face. Who knew that blush applied so heavily over such a wide territory could be somewhat flattering? Clearly I need to get more adventurous and liberal with my everyday blush application. 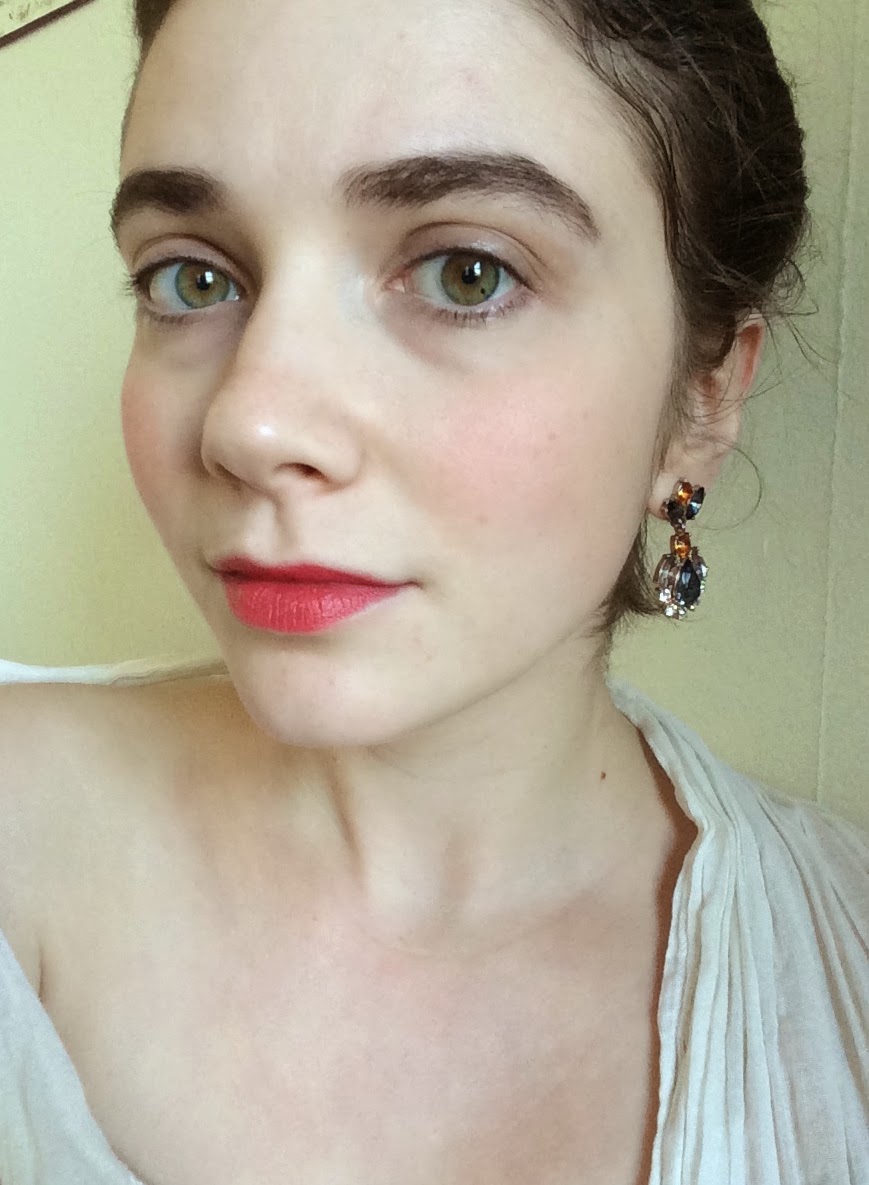 Best of all, no time wasted dabbing and blending eyeshadow. When you're the power behind the throne, you don't have an eternity to spend on your auxiliary beauty. 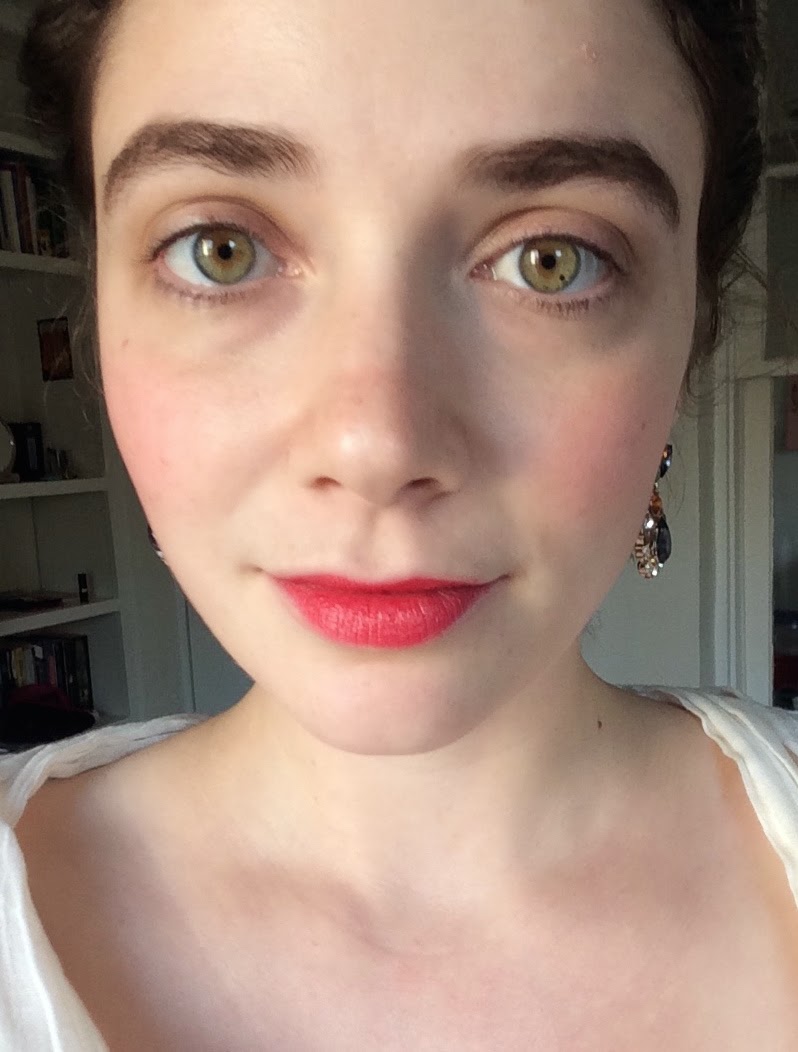 By the way, this is my 100th post on Auxiliary Beauty. Thank you all for reading and leaving such thoughtful comments over the past nine months! Writing this blog has been a great source of pleasure for me, as I hope reading it has been for you. <3
Posted by auxiliary beauty at 5:50 PM