FOTD: Toward an Ethnography of the Edwardian Cyborg

In the last year, I've become obsessed with an aesthetic that I like to call "Edwardian cyborg": futuristic sleekness coupled with windswept Gibson-girl glamour. This is the image that started it all: 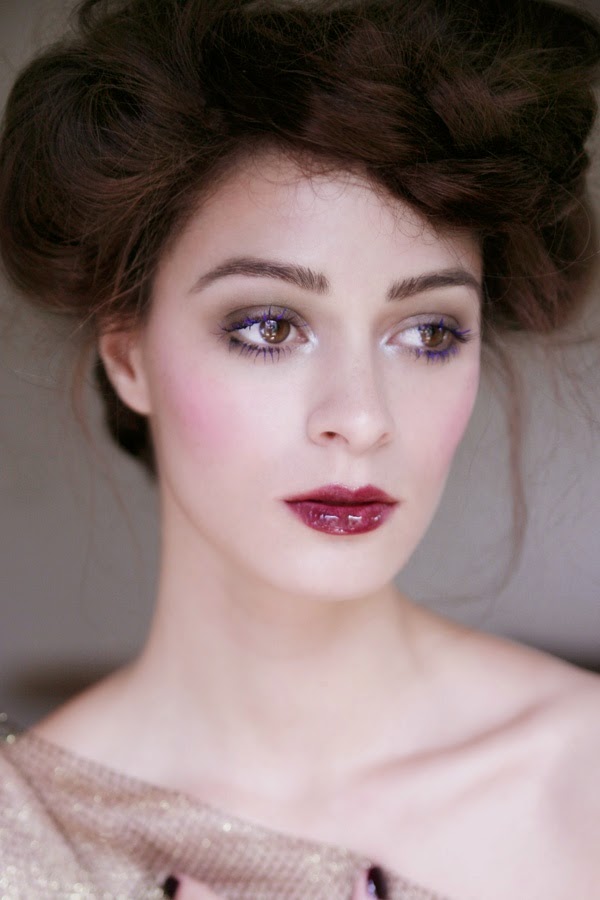 You've already seen this photo in an earlier post, wherein I experimented with theBalm's Nude 'tude palette. "Edwardian cyborg" was the name I gave to my (much inferior) interpretation of this look: glassy lips, touches of frost and metal on the eyes, unnaturally rosy cheeks, hair elaborately piled and carefully mussed. Makeup artist Troy Jensen based this look on the '80s-meets-'40s glamour of the cyborg Rachael from Blade Runner (1982), but I see a few differences between the original and Jensen's rendition. (For my previous post, I traced the image to Jensen's website, but I can't find it there now. Apologies.) 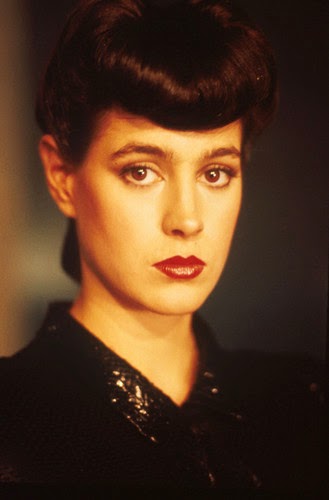 Compared to Jensen's cotton-candy cyborg, Rachael, played by notorious Hollywood nutcase Sean Young, has a smoother, sleeker coiffure and a darker color palette for both clothes and makeup. Her wardrobe--let's call it "post-apocalyptic '80s businesswoman"--is entirely black, with sharp angles and formidable shoulder pads. Her red lipstick is the only hint of unnatural color on her face. It's a compelling look, but a rather severe and heavy one. By contrast, when I look at Jensen's model, I think of the young women drawn by Charles Dana Gibson between the 1890s and 1910s. Gibson set out to represent the quintessential American girl, and his "Gibson girls" were athletic social butterflies with airy frocks, towers of curls, and a passion for the outdoors. 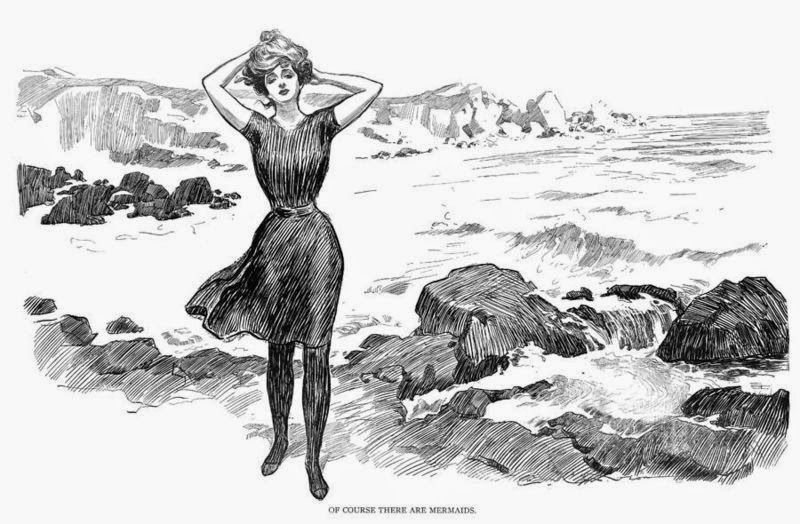 "Of course there are mermaids."

"The Weaker Sex: The young man imagines himself the latest victim of some fair entomologist."

But for all their high-spirited, independent-minded brio, there's something cyborg-like about these women, especially when Gibson depicts them in groups. They're just rumpled enough to give the lie to their artificiality, at least at first glance. But at second glance, it's easy to imagine them fresh from an assembly line, like the cyborgs up for auction in Janelle Monáe's "Many Moons" video. 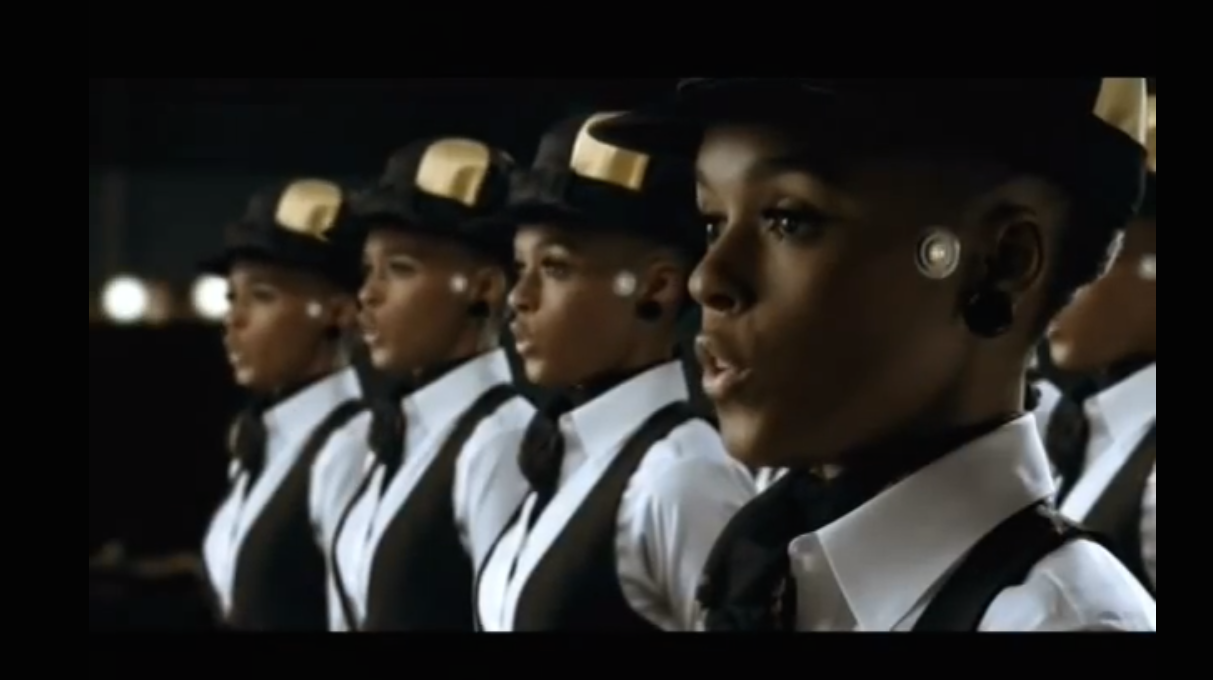 Monáe is one of my central inspirations for this aesthetic, and some of the other cyborgs she impersonates in "Many Moons" wear markedly old-fashioned looks: a corset, a ruffled cravat. I suspect that these details allude to American antebellum culture, given that "Many Moons" depicts a cyborg slave auction. Monáe's alter ego, Cindi Mayweather, is the protagonist of all of her albums to date: an "ArchAndroid" determined to lead her people to freedom. 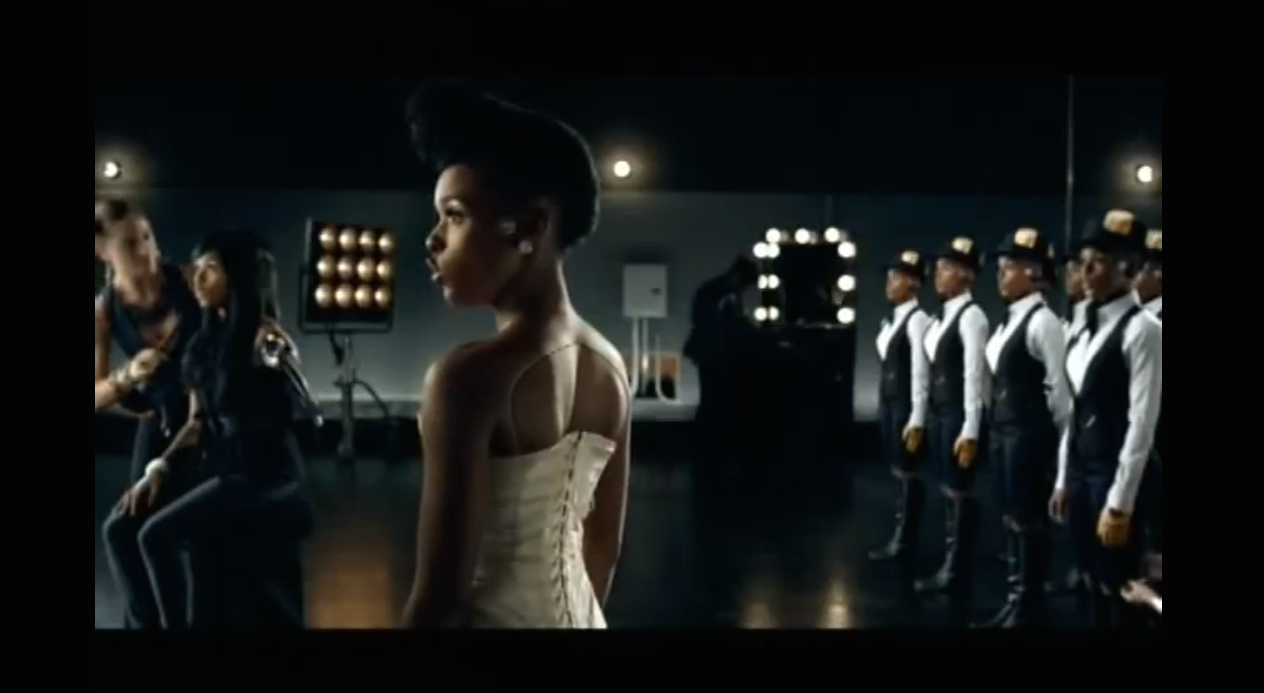 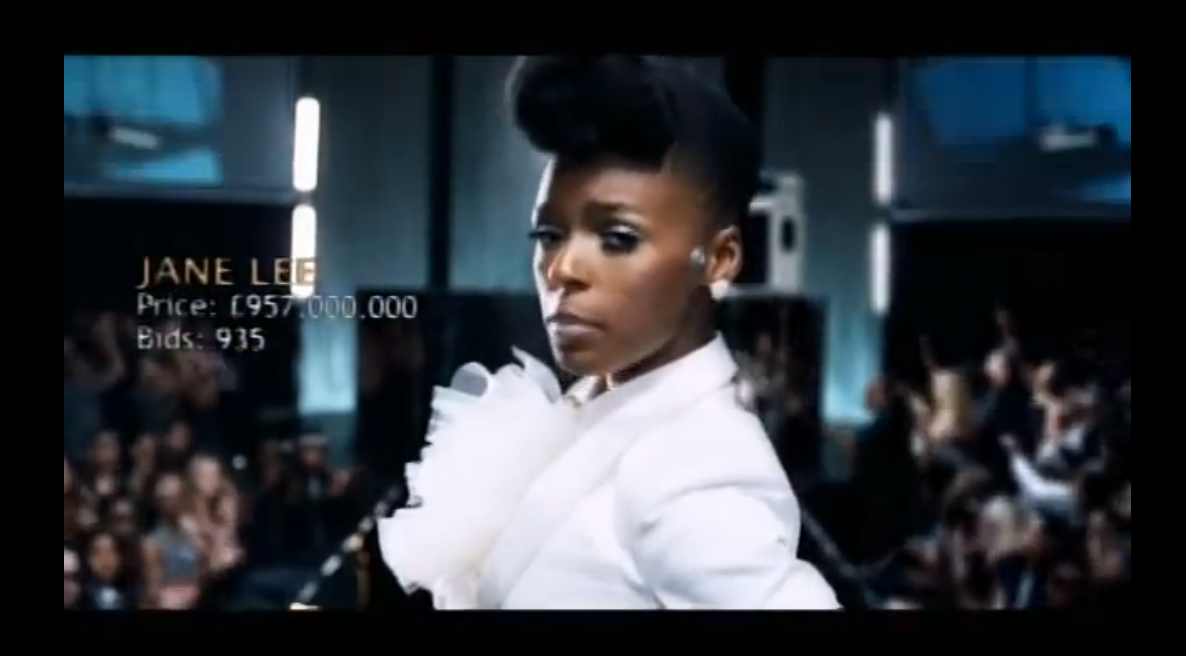 Below, some editorial looks that have shaped my Edwardian-cyborg concept (which has a dedicated Pinterest board, of course). 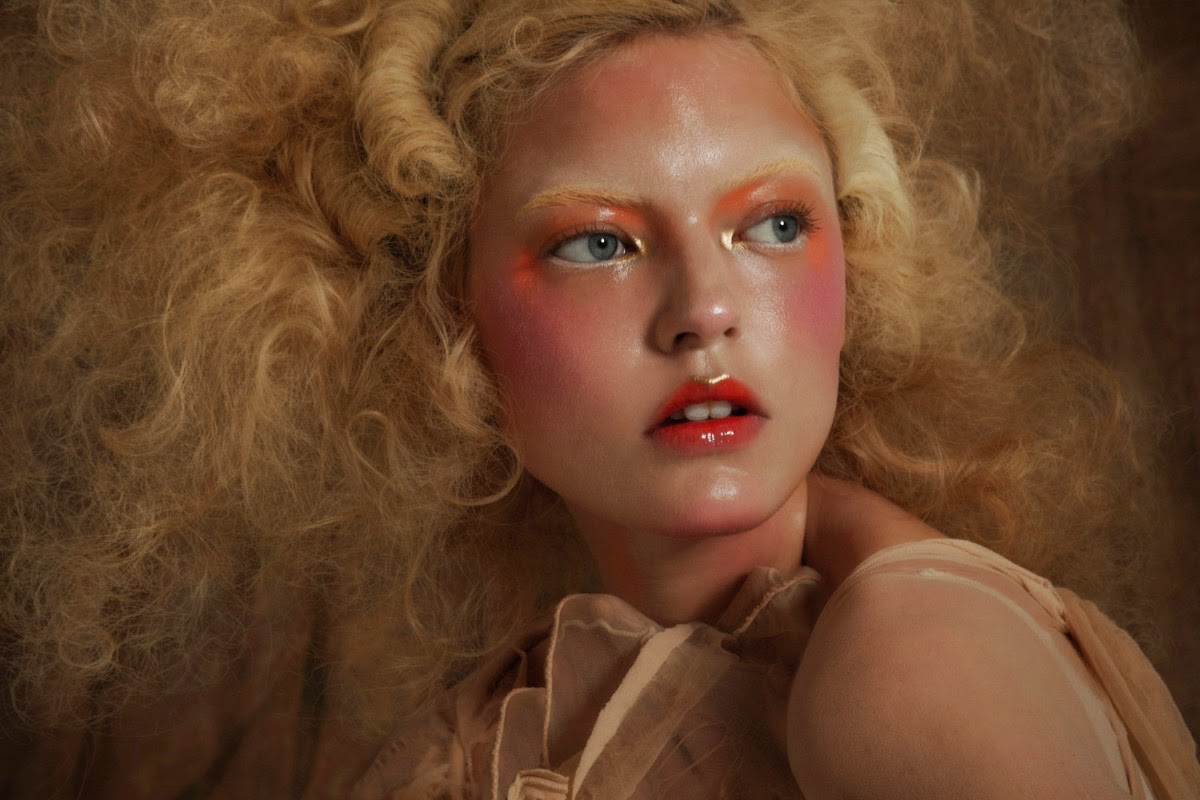 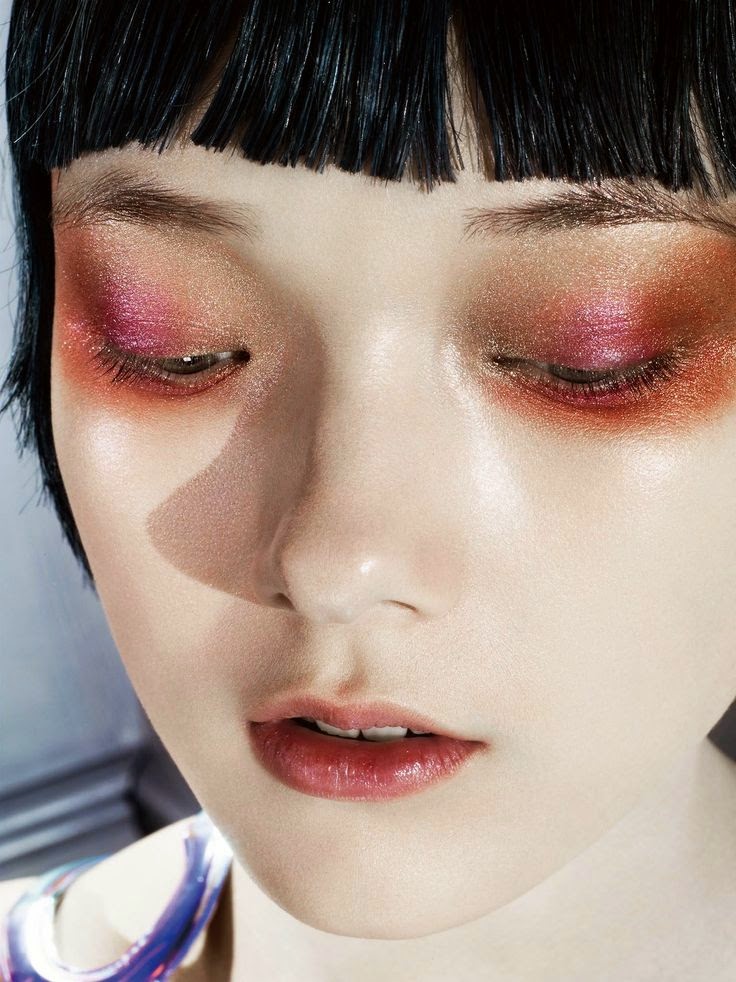 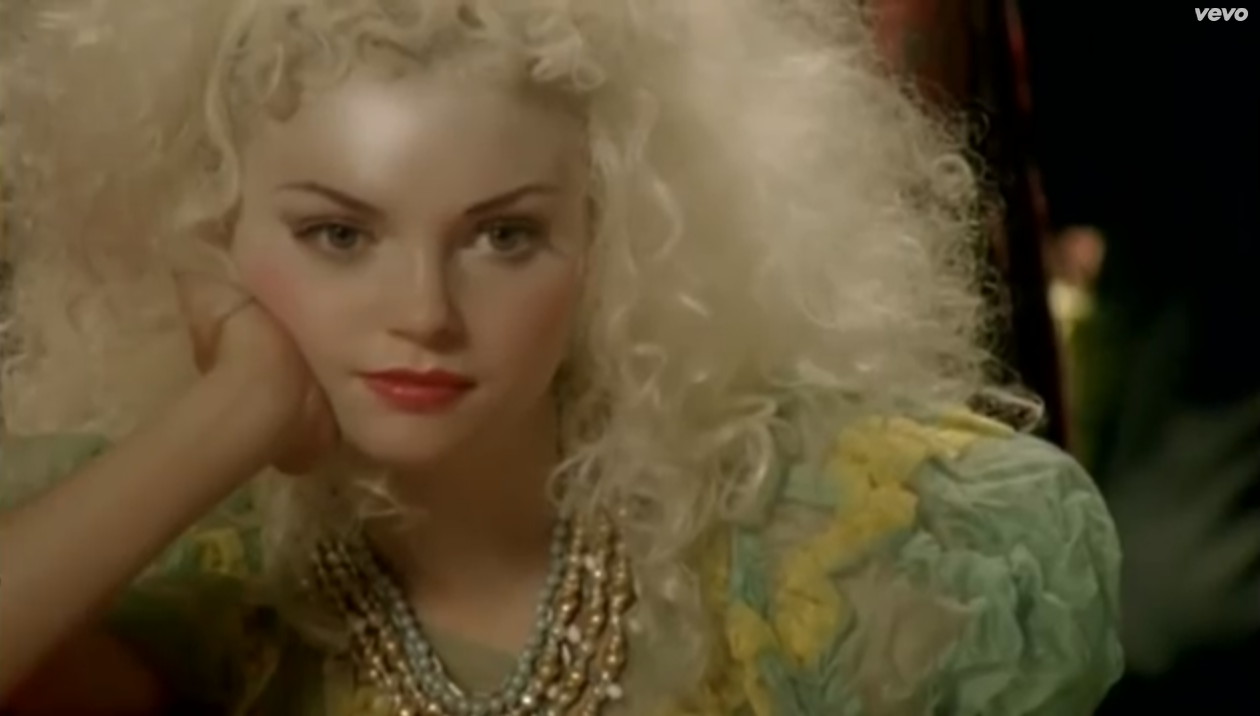 The faithless femme fatale from The Killers' "Mr. Brightside" video (2004).

There are a few threads connecting all of these images. The looks are doll-like and conventionally futuristic (metallic eyes, glowing skin, bright cheeks), but with a hint of dishevelment. In the first and last looks, it's the hair that's unruly; in the middle two, it's the makeup (lips in the second, eyes in the third). Compare this aesthetic with the image below, from Elle Vietnam: 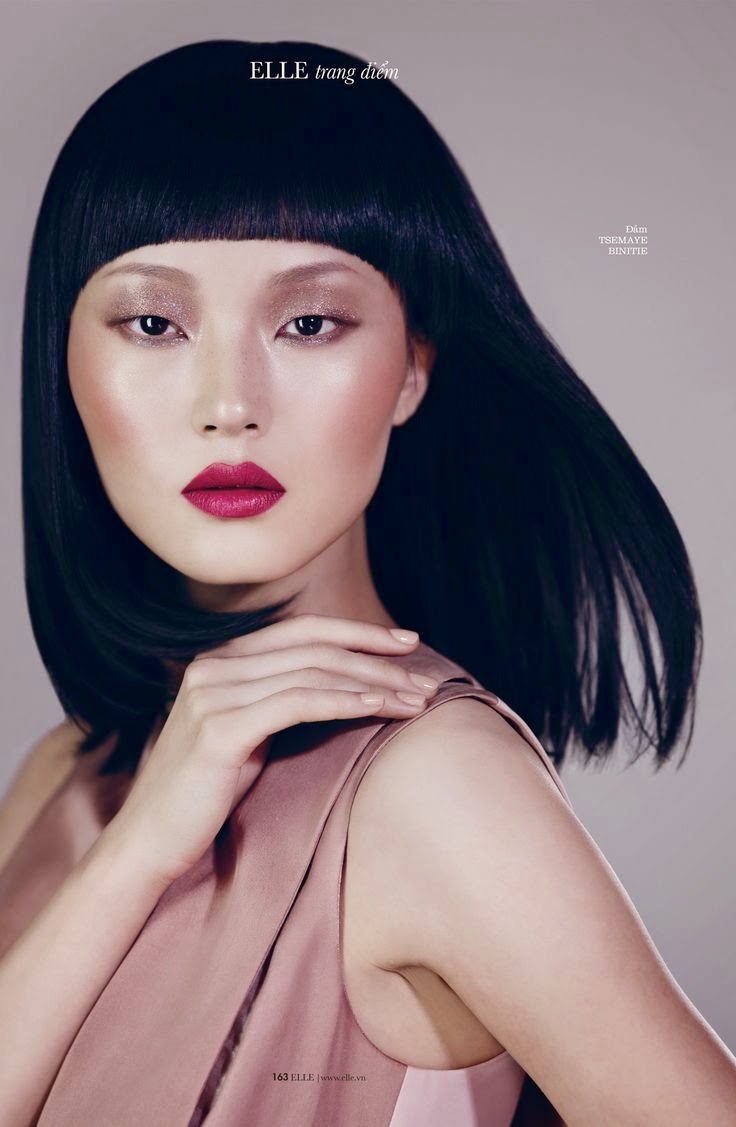 
The individual makeup elements are similar to those in the images above (metallic eyeshadow, clear bright lips), but they're applied to the model more neatly and symmetrically, with a more delicate hand. Her glow is subtle, not glossy or plasticine. Her hair is perfectly smooth, almost helmetlike. The overall effect is beautiful, but I see it as straight-up cyborg, not Edwardian cyborg.

A big caveat here. "Edwardian" is not the right adjective for all of the looks I file into this category; it's just my personal shorthand for "old-timey fanciful with blurred edges and sharp colors." Some of the images that have inspired the concept skew more Elizabethan or Baroque or Rococo than Edwardian (technically, Charles Dana Gibson himself was not an Edwardian either, but "illustrator active during the Taft presidency" doesn't have the same ring). Take this photo by Alfa Castaldi from Vogue Italia, 1970: 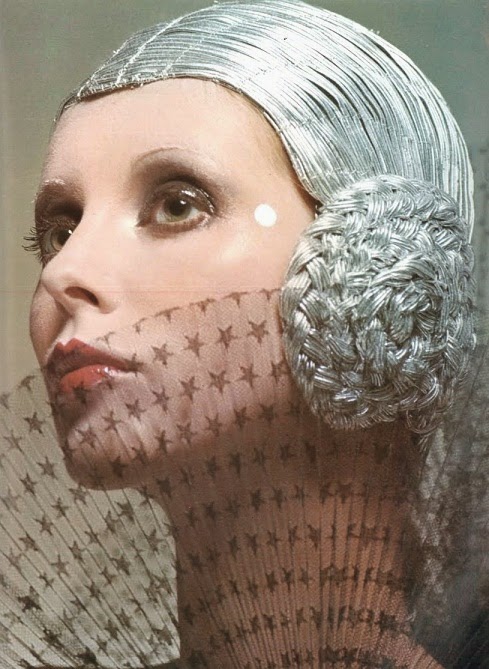 This look has a little of everything: hair-thin '30s brows, a pseudo-Jacobean ruff, an 18th-century mouche (beauty patch), roughly applied silver eyeshadow, and proto-Leia braided buns. In fact, none of these details could really be called "Edwardian." I should really think of a better adjective to pair with "cyborg," shouldn't I? But I can't, so it stays for now. And no, I haven't forgotten about steampunk, another aesthetic that injects gleaming futurism into the catchall "vintage" category. But I see steampunk as darker, grittier, and busier, with more brown and gold tones, more ruffles and ornaments. The Edwardian cyborg is cold, bright, and usually minimalist, with one or two arresting points of interest. Sartorially, steampunk borrows from the stiffness of Victorian costume; Edwardian women's clothing has looser, more flowing lines, often with metallic sequined accents. My Edwardian cyborg translates some of this flow and sparkle into her makeup. 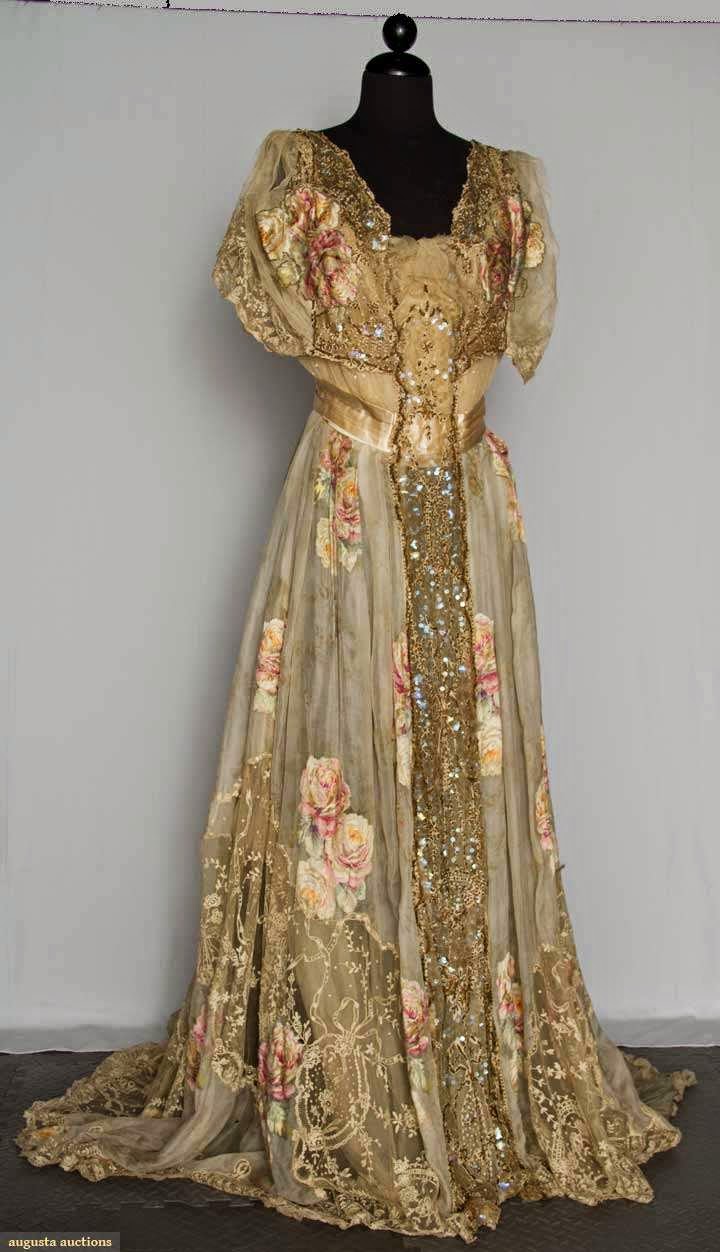 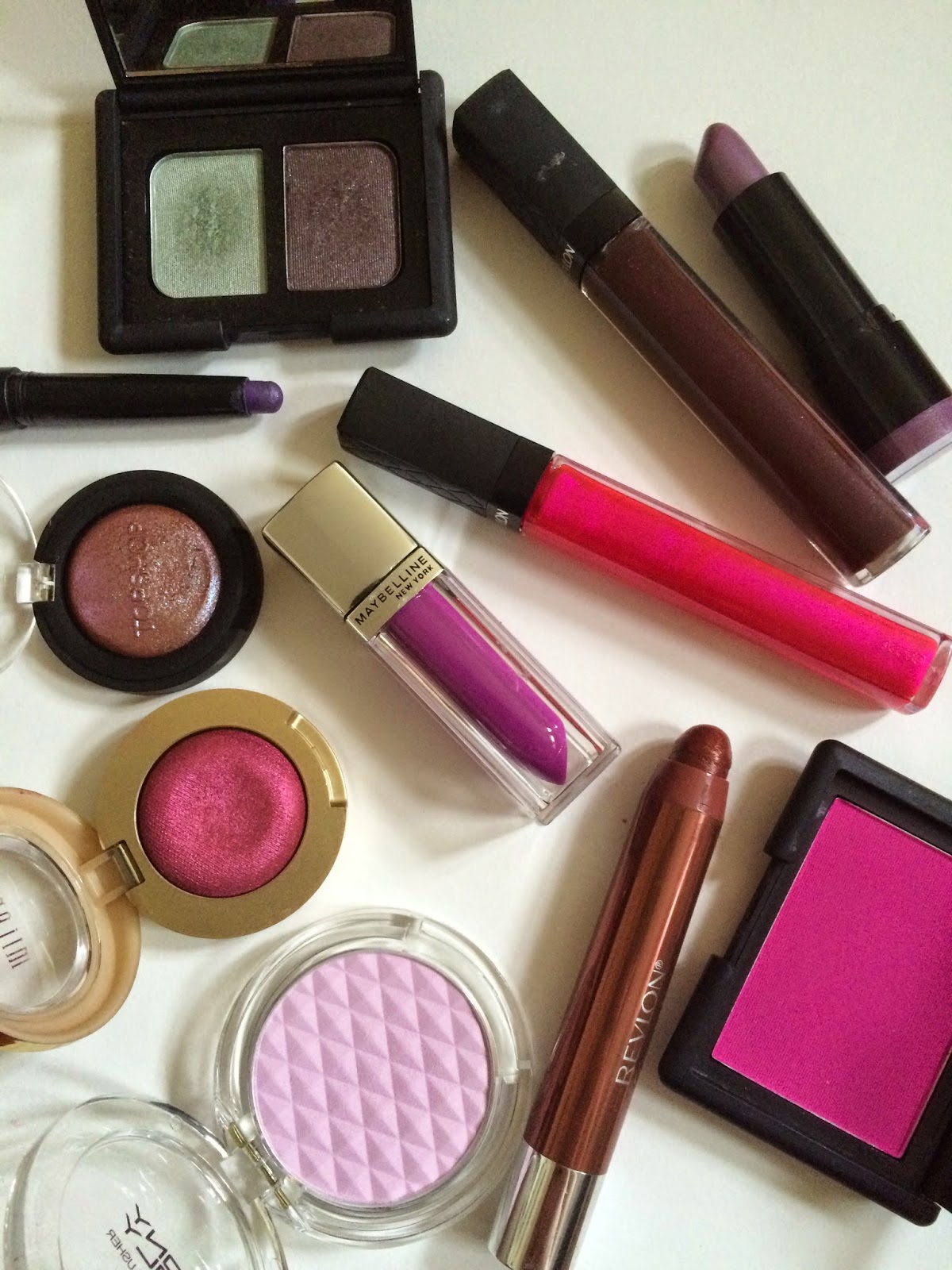 Yesterday I put together a look inspired by the images above, but far less editorial (and far less skilled, but let that pass). Unfortunately, there was so little natural light that I had to use the overhead light, and the colors look warmer and more muted than they would otherwise. Still, I hope you can get some sense of the shades and textures I used. On eyes, Milani Bella Rouge, NARS Lhasa, and Kiko #16; on cheeks, NARS Coeur Battant; on lips, Revlon Embellished. 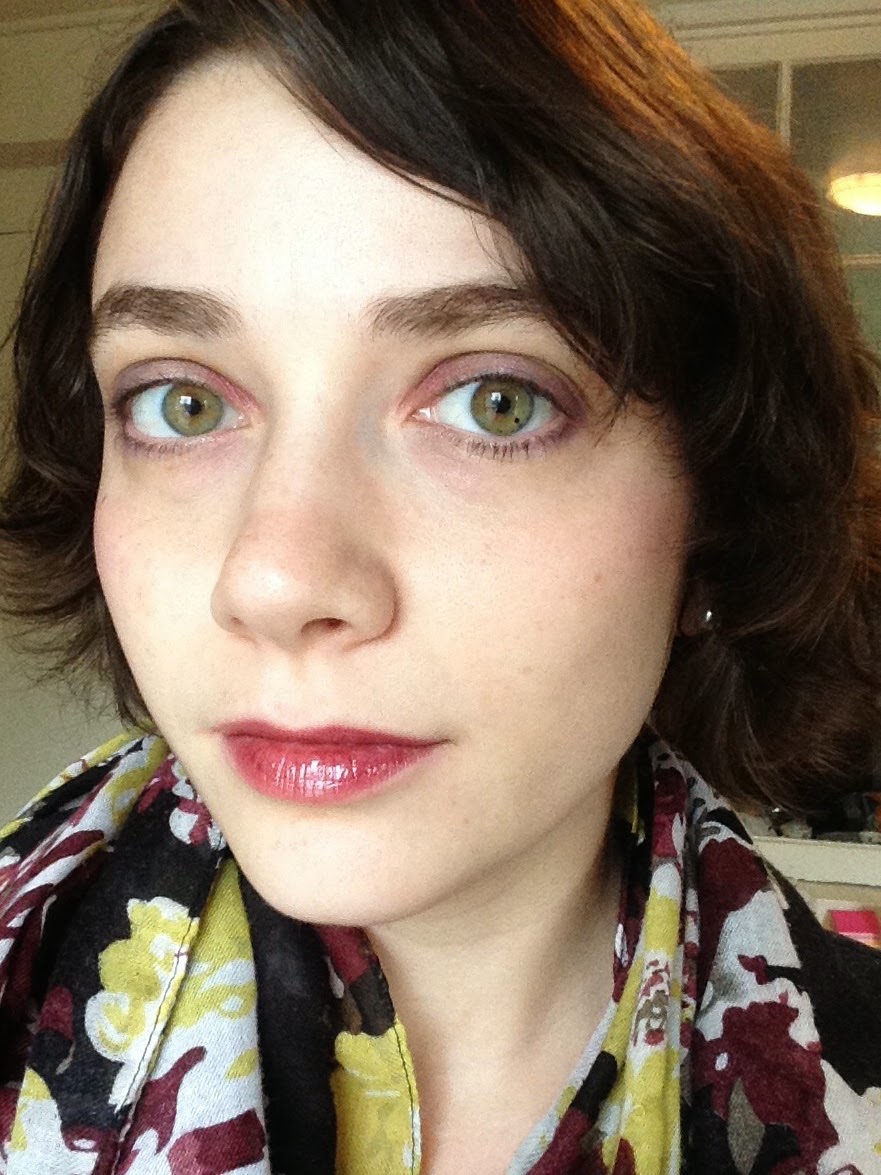 Better view of the eyes: I applied Lhasa all over the lid, then blended Bella Rouge into the inner corner and applied Kiko #16 to the outer third and the lower lashline. 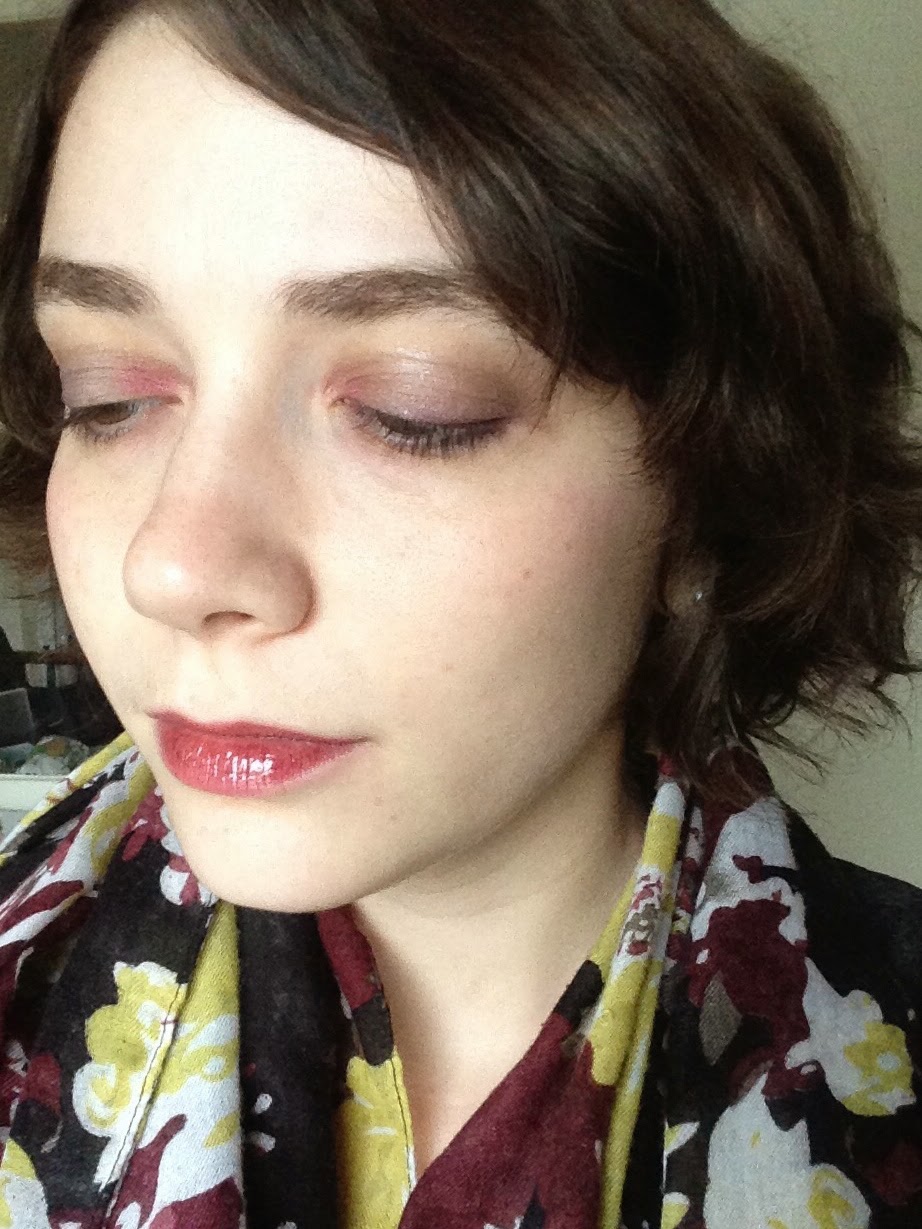 And because I never posted about my Effie Trinket Halloween costume, this seems as good a time as any to show you a photo of the makeup, which also fits squarely into the aesthetic I'm trying to describe. 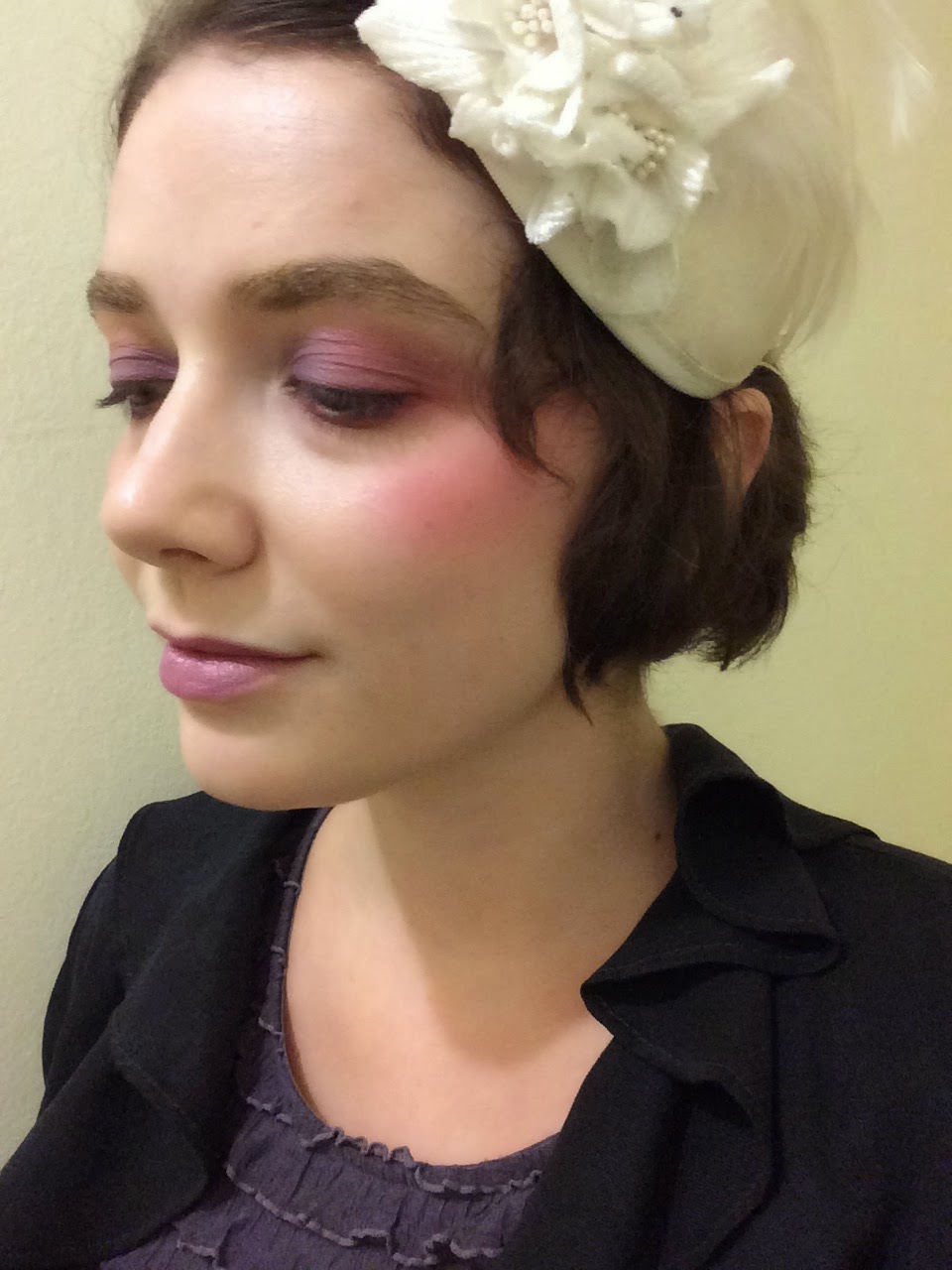 To achieve Effie's pallid glow, I brushed theBalm Sassy eyeshadow, a frosty white, all over my face. I tried to make my eyebrows gleam with theBalm Snobby, a metallic yellow-gold, but didn't quite pull that off. Over eyeshadow primer, I used Kiko Infinity Eyeshadow #251, a sparkly lavender, and Milani Bella Rouge, blending Bella Rouge outward to meet up with NARS Coeur Battant, which I applied high on my cheekbones and up to my temples. Lipstick was NYX Castle, of course. I failed to acquire a curly wig before Halloween, so let's call this look "broke Effie." As the Capitol escort assigned to District 12, she probably didn't get much in the way of income or prep teams, anyway. I imagine her as a bit of an enterprising DIYer.

I've been asking myself why I'm so attracted to this aesthetic. Part of it, I think, is that I've long since despaired of ever looking flawlessly polished. The cyborg fantasy is the fantasy of superhuman perfection, but I like thinking about those moments when the perfection slips to reveal the screws beneath the skin. We learn about makeup and beauty largely through still images, but our own attempts are always subject to entropy. Eyeshadow creases, lipstick fades, nail polish chips, mascara flakes off and peppers the cheekbones. Makeup is one of the most ephemeral things we interact with, yet it exists in part to make us look ageless and flawless--the opposite of ephemeral. I appreciate being reminded of that paradox. If the Edwardian-cyborg look had an epigraph, it would be Robert Herrick's poem "Delight in Disorder" (1648), published almost exactly 250 years before Edward VII's accession in 1901 but no less relevant for that:

A Sweet disorder in the dresse
Kindles in cloathes a wantonnesse:
A Lawne about the shoulders thrown
Into a fine distraction:
An erring Lace, which here and there
Enthralls the Crimson Stomacher:
A Cuffe neglectfull, and thereby
Ribbands to flow confusedly:
A winning wave (deserving Note)
In the tempestuous petticote:
A carelesse shooe-string, in whose tye
I see a wilde civility:
Doe more bewitch me, then when Art
Is too precise in every part.