We makeup fiends are a fickle bunch, hailing a product as a holy grail one week and forgetting about it the next. I slip in and out of lipstick infatuations as regularly as I once slipped in and out of professor crushes, but at least professor crushes are free. Lipstick is not, and right now, my friends, I'm pretty broke. I haven't bought a lipstick in a month, and I want to maintain that discipline until the end of the year. What better time to shine a spotlight on some of the lip colors I've neglected recently? I own at least sixty, but I end up playing favorites each season. To break my recent patterns, I've decided to take part in Project Make-a-Dent, the brainchild of Helen at Lola's Secret Beauty Blog. The rules are simple: commit to using a handful of products more often, then do so. The goal is to either use up or make a dent in beauty products that have slipped out of your field of view. For my version of Make-a-Dent, I focused on lipsticks, since I have so many more of them than I do of any other beauty product. 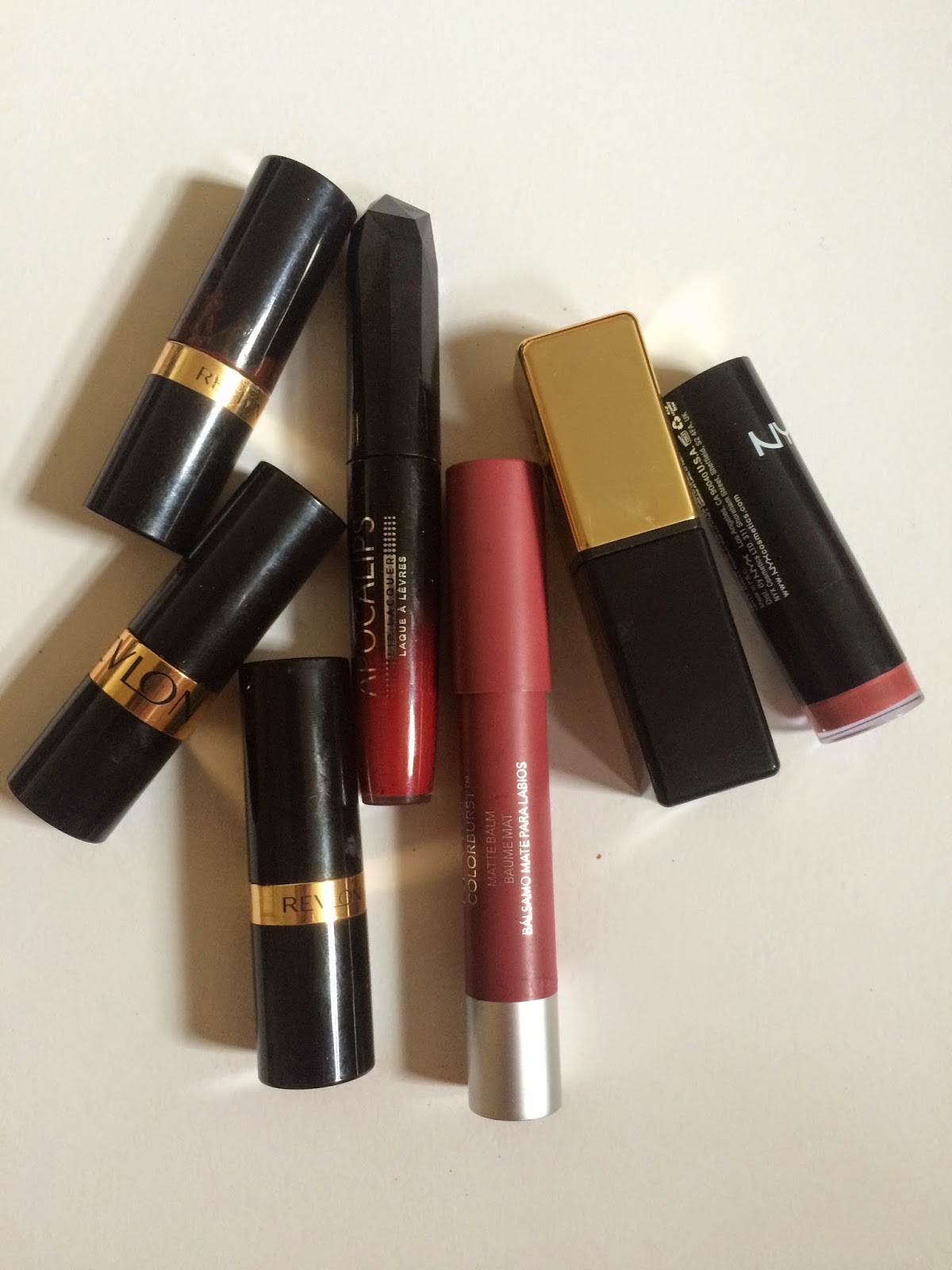 I chose seven that seemed appropriate for the season, figuring that I'd be more likely to wear mauve than neon fuchsia in late autumn. In this post, I'll touch on the reasons why I've been neglecting each lipstick. Because there are reasons for everything you do beauty-wise, and if you stare at your navel long enough, you'll find them. 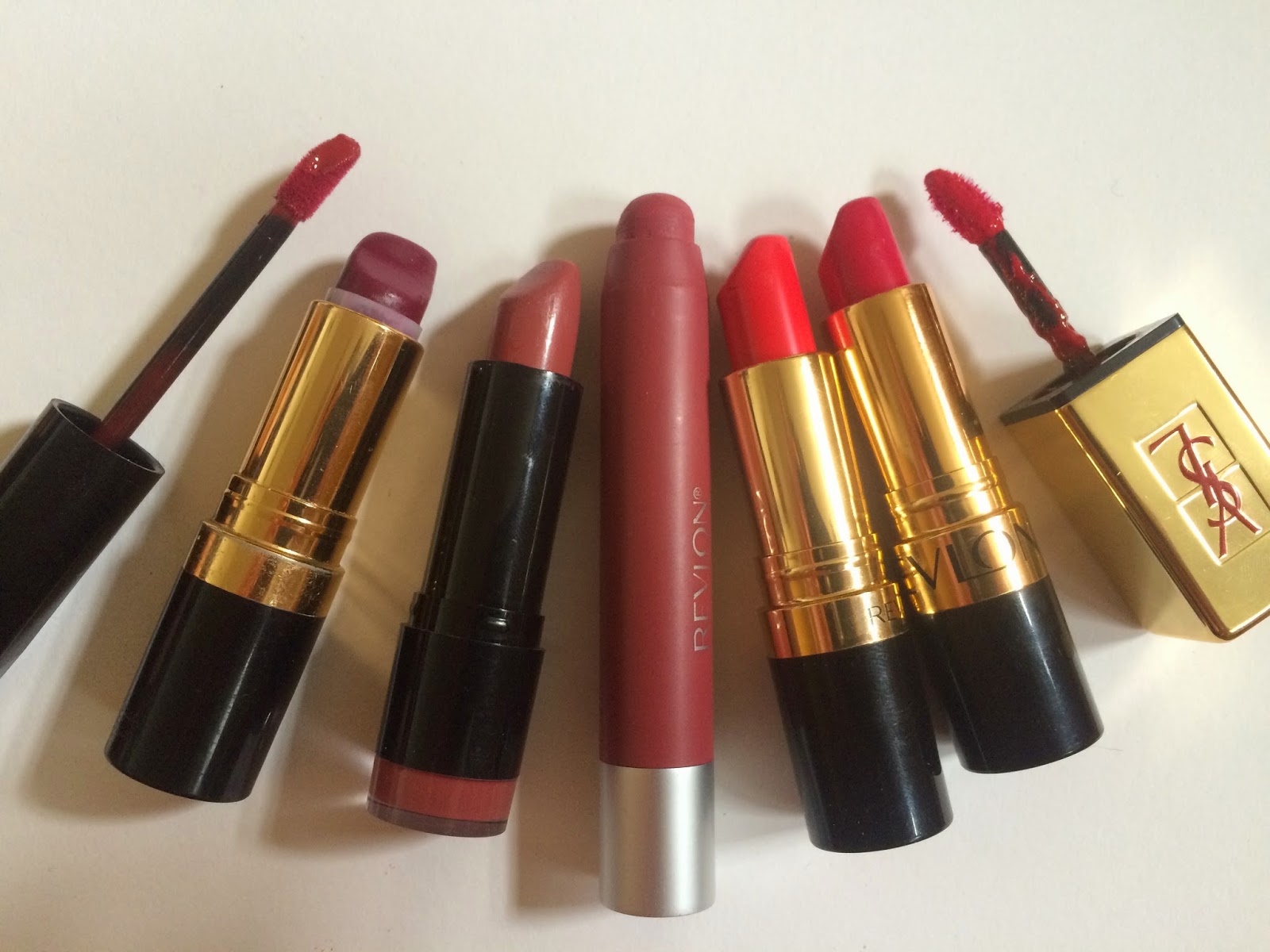 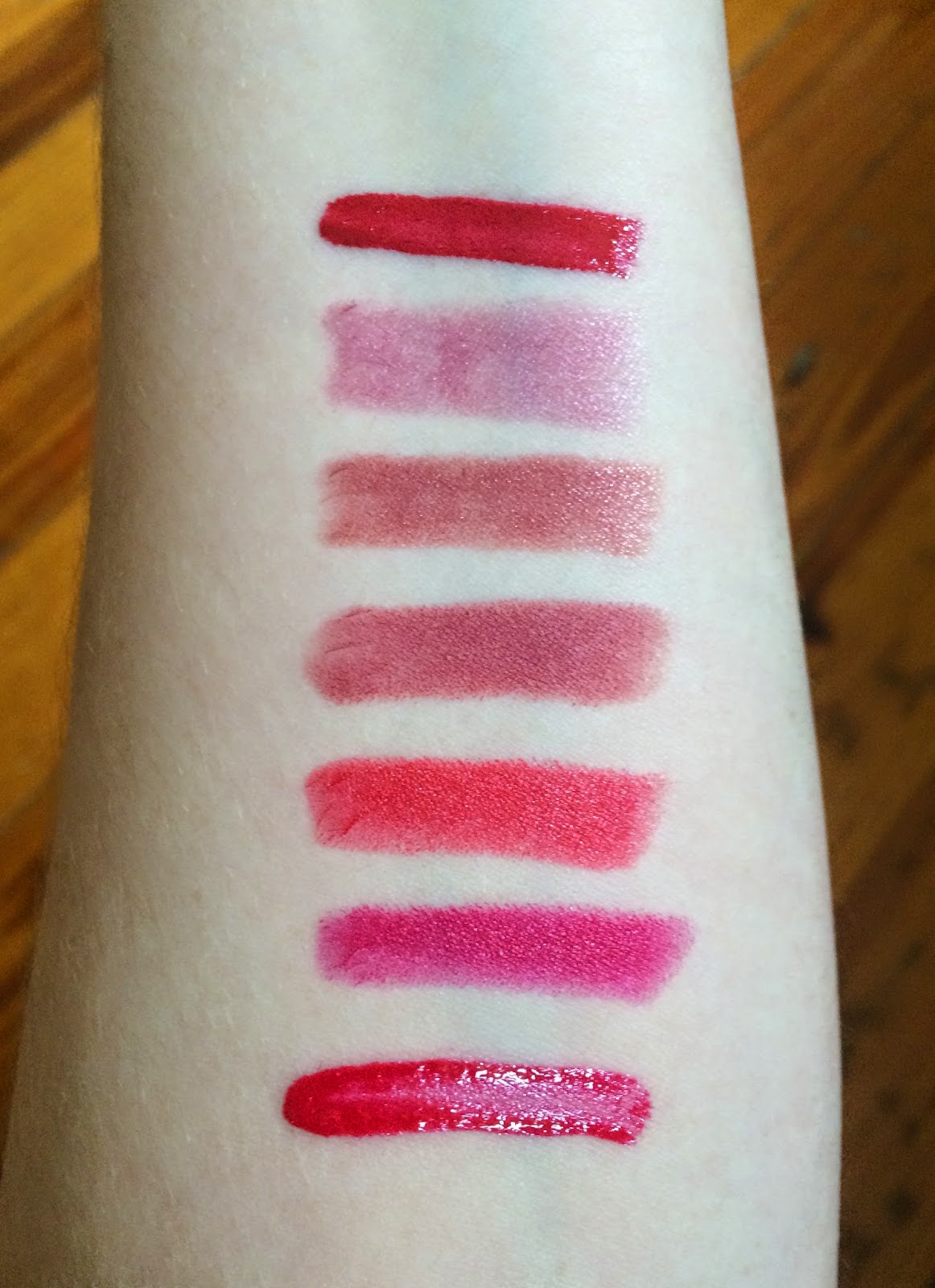 And some musings, in the same order as above. If I've reviewed a lipstick previously, I've linked to the review in the bolded portion.

1. Rimmel Apocalips Lip Lacquer in Across the Universe 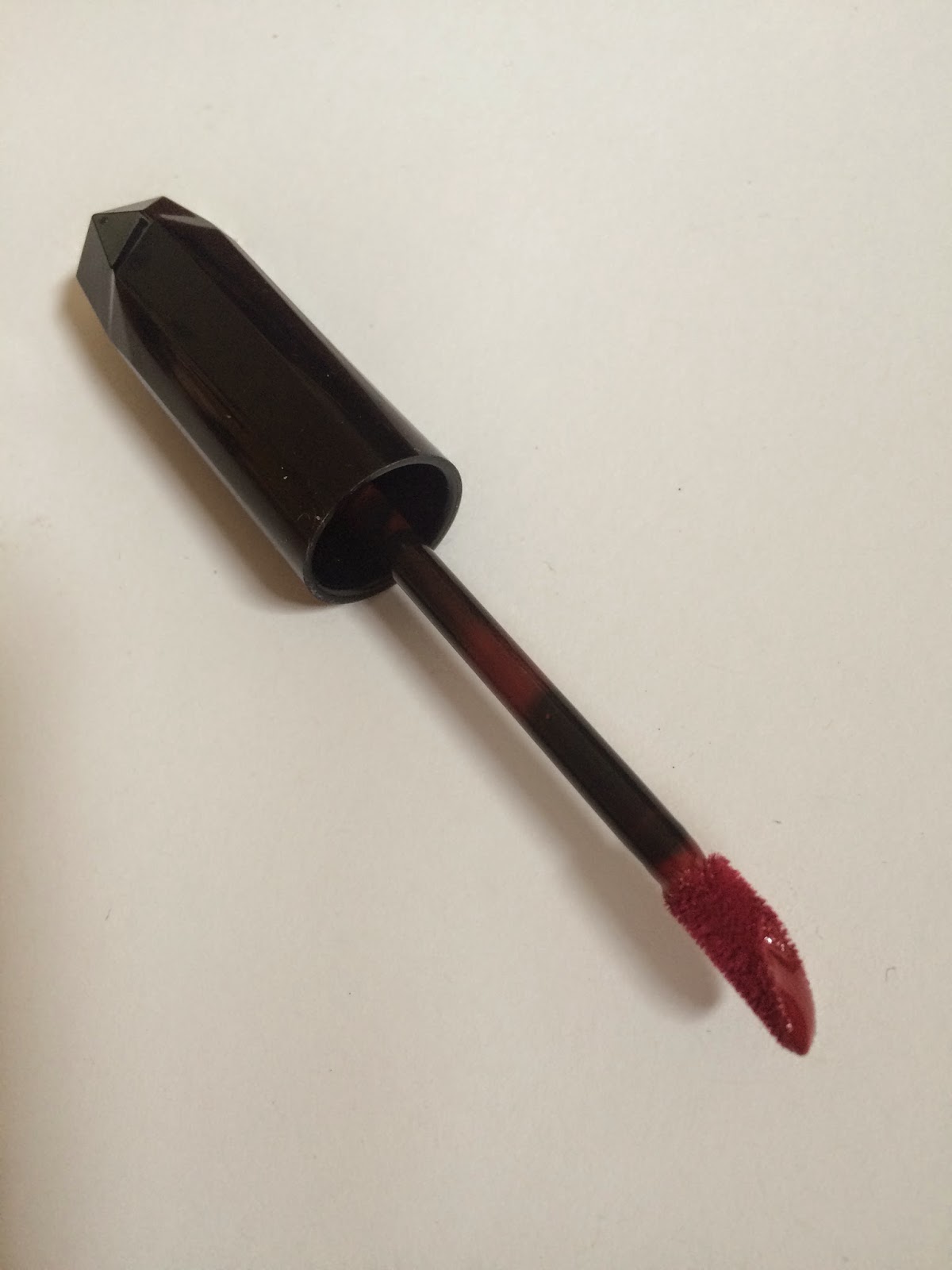 Reason for neglect: The past year has taught me that I'm not a liquid-lipstick person. There's nothing wrong with Across the Universe; in fact, it's one of the best-performing lipsticks I own, being lightweight, opaque, long-lasting, and non-drying. I just prefer using traditional lipstick bullets, due perhaps to the satisfaction I get from seeing the product dwindle over time. Also, I was hoping for a proper brick red when I bought Across the Universe, and I thought the color would look warmer and browner on me than it does. After finding NYX Alabama, which was exactly the color I wanted, I let Across the Universe fall by the wayside. It's a shame, really, because this is a beautiful red with a very slight brick tint, perfect for those days when you mean business. I wore it today with Maybelline Bad to the Bronze on my eyes and a touch of Illamasqua Zygomatic on my cheeks: 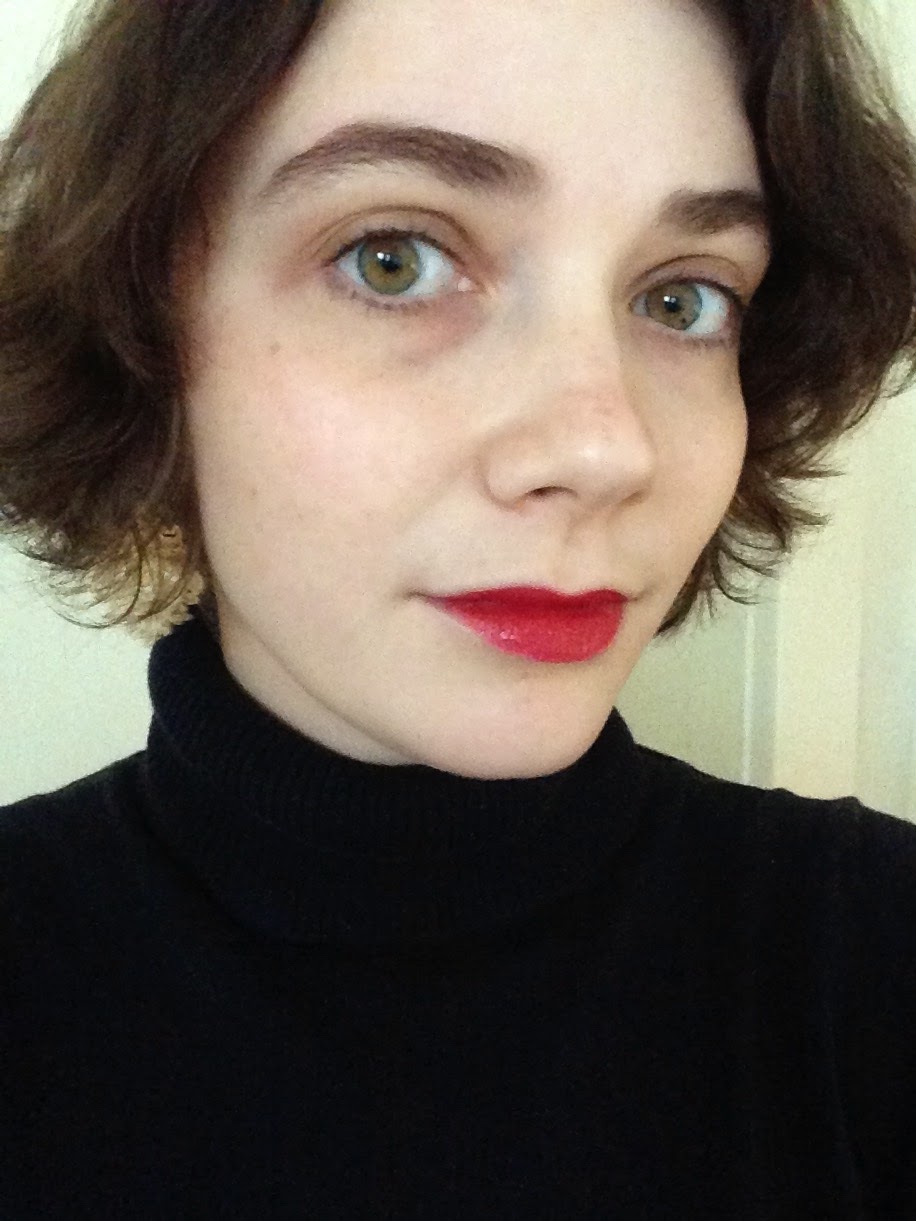 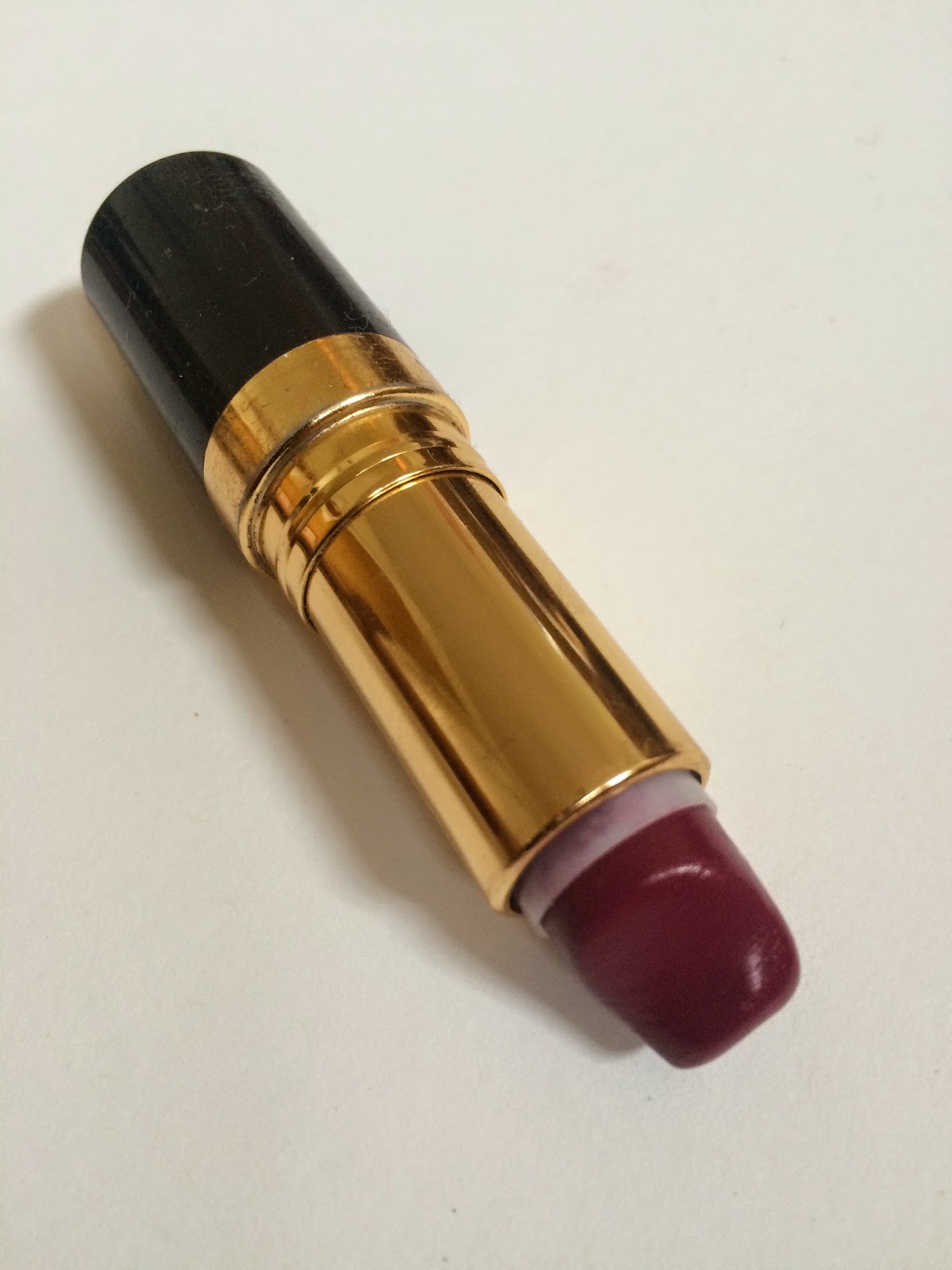 Reason for neglect: One of the governing laws of cosmetics is that the closer you come to finishing a product, the longer it manages to stretch itself out. Put another way, an empty lipstick tube is the most tragic of asymptotes, as illustrated in this extremely technical graph: 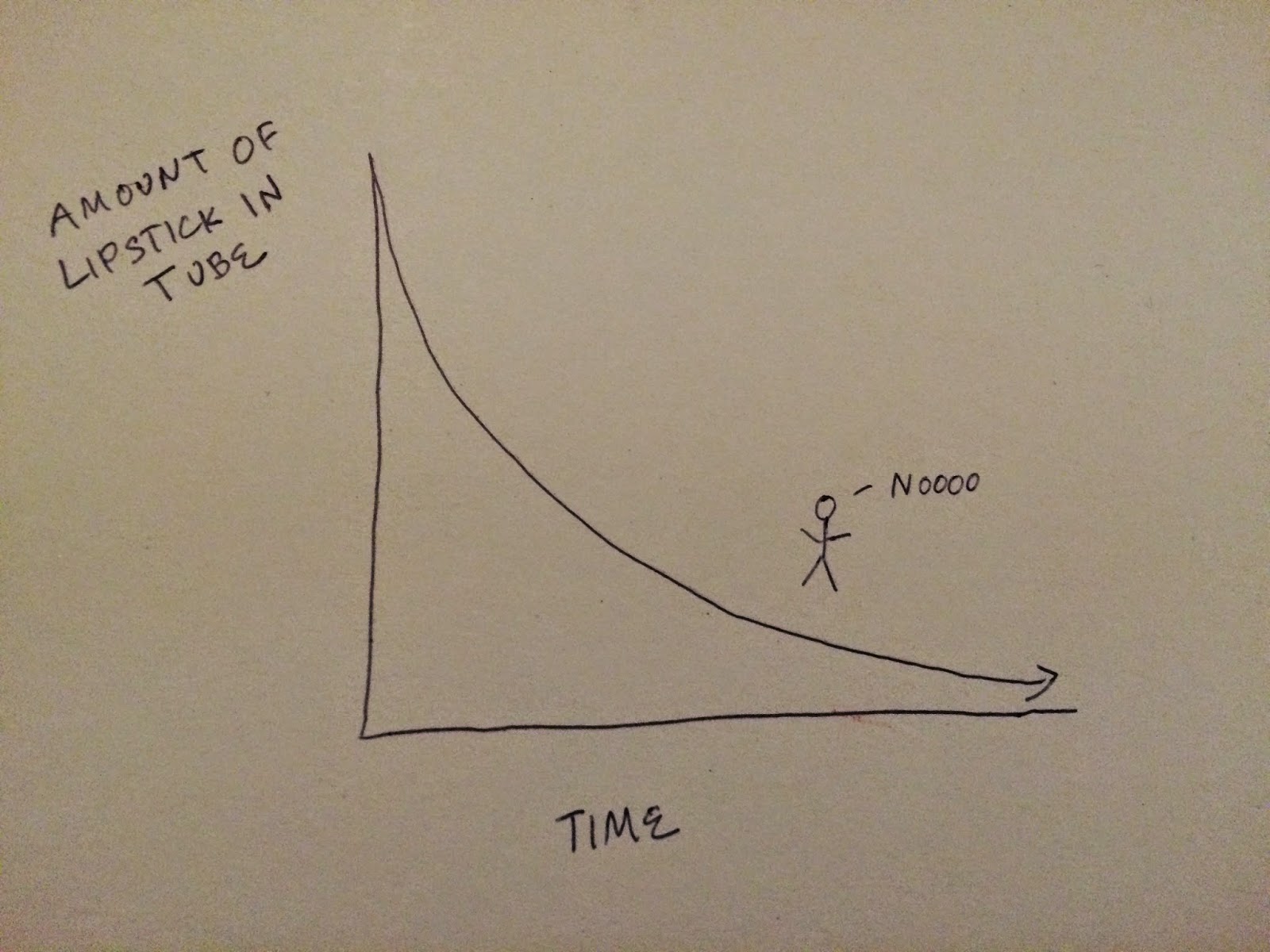 Anyway, that's what's happened with Plum Velour. I got smug about having almost finished it and turned my attention to other lipsticks, and now every time I use it, I'm reminded that I still have quite a bit left. To steal a phrase from Belly, I'm starting to have "DIE, BASTARD! DIE!" feelings about this lipstick. My goal is to use it up completely before my next Make-a-Dent update. In my recent review, I said I'd repurchase it, but let's pretend I never wrote that.

3.  NYX Round Lipstick in Perfect 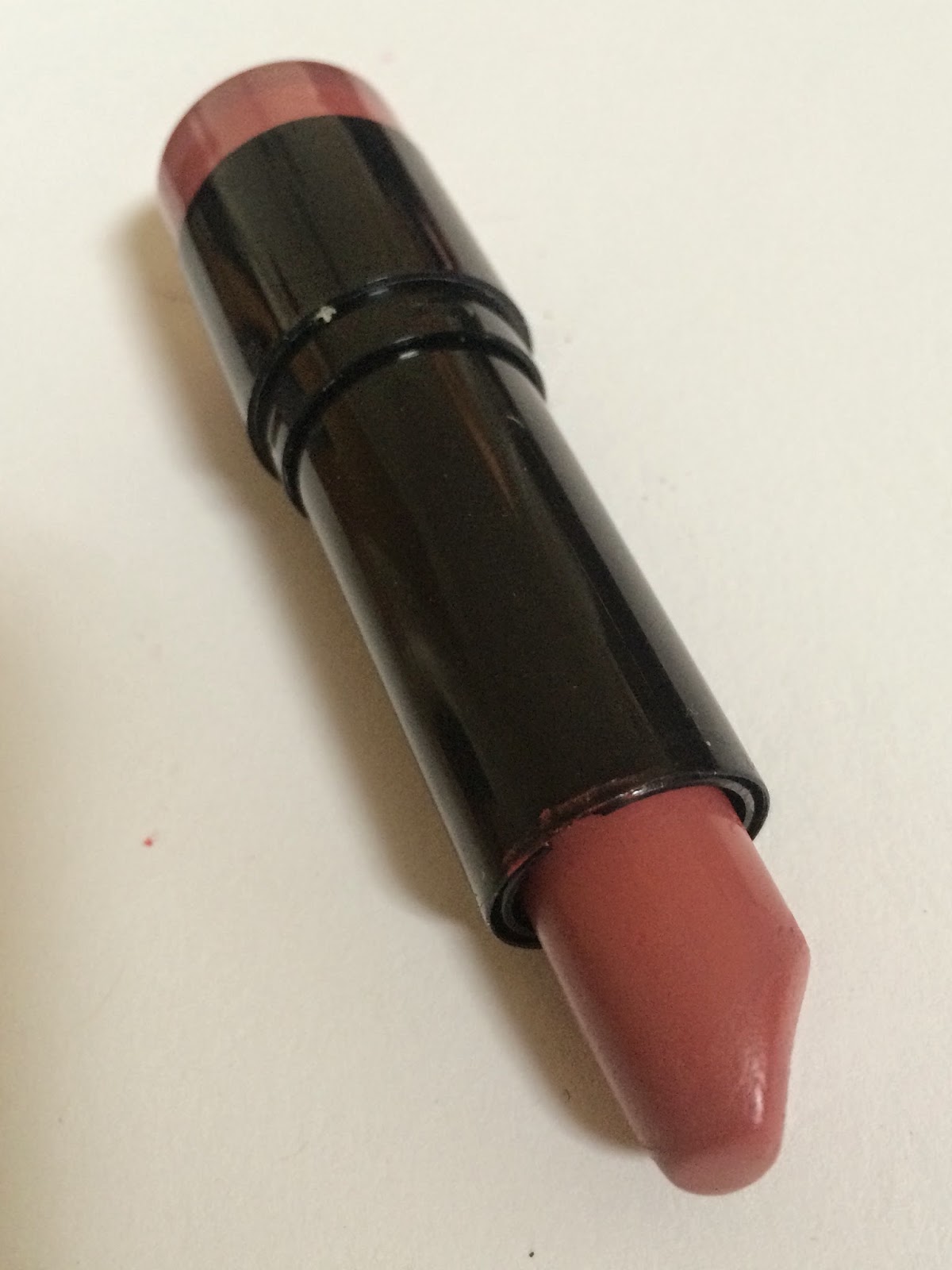 Reason for neglect: This demure mauvey-nudey-pink is a forgettable color, so I have to remind myself periodically that it exists and looks good on me. (It pulls darker and pinker on my lips than it looks in the tube.) I bought Perfect in the summer of 2013, forgot about it until my trip to London two months ago, wore it repeatedly those two weeks, forgot about it again when I came back to the States, and just now remembered that I'd been meaning to include it in my Make-a-Dent post. Perfect is unassuming; it doesn't insist on itself. It's a nice color to pair with a colorful or smoky eye, but because I rarely wear heavy eye makeup, I rarely reach for Perfect either. 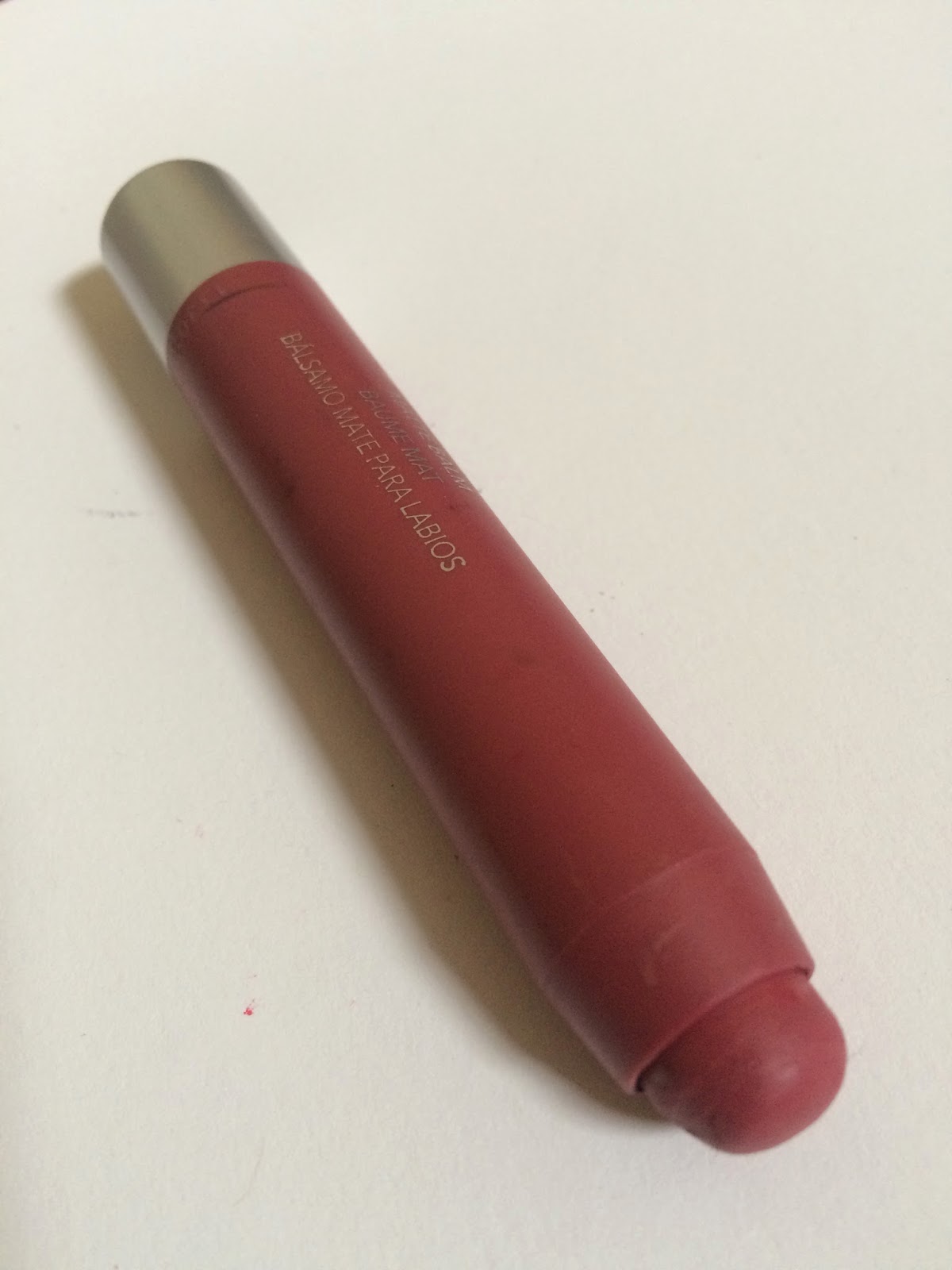 Reason for neglect: I wore Sultry constantly in the first half of this year, but put it aside for the summer and somehow never picked it back up when the weather cooled. It's a deeper, bolder color than Perfect, but they belong to the same mauve-neutral family. Sultry is a great fall lipstick, and no amount of navel-gazing has revealed to me why I haven't been wearing it recently. Part of the reason might be that it's not quite neutral but not truly bold, either, so I have a hard time deciding whether to pair it with a simple, subtle eye or something more attention-grabbing. 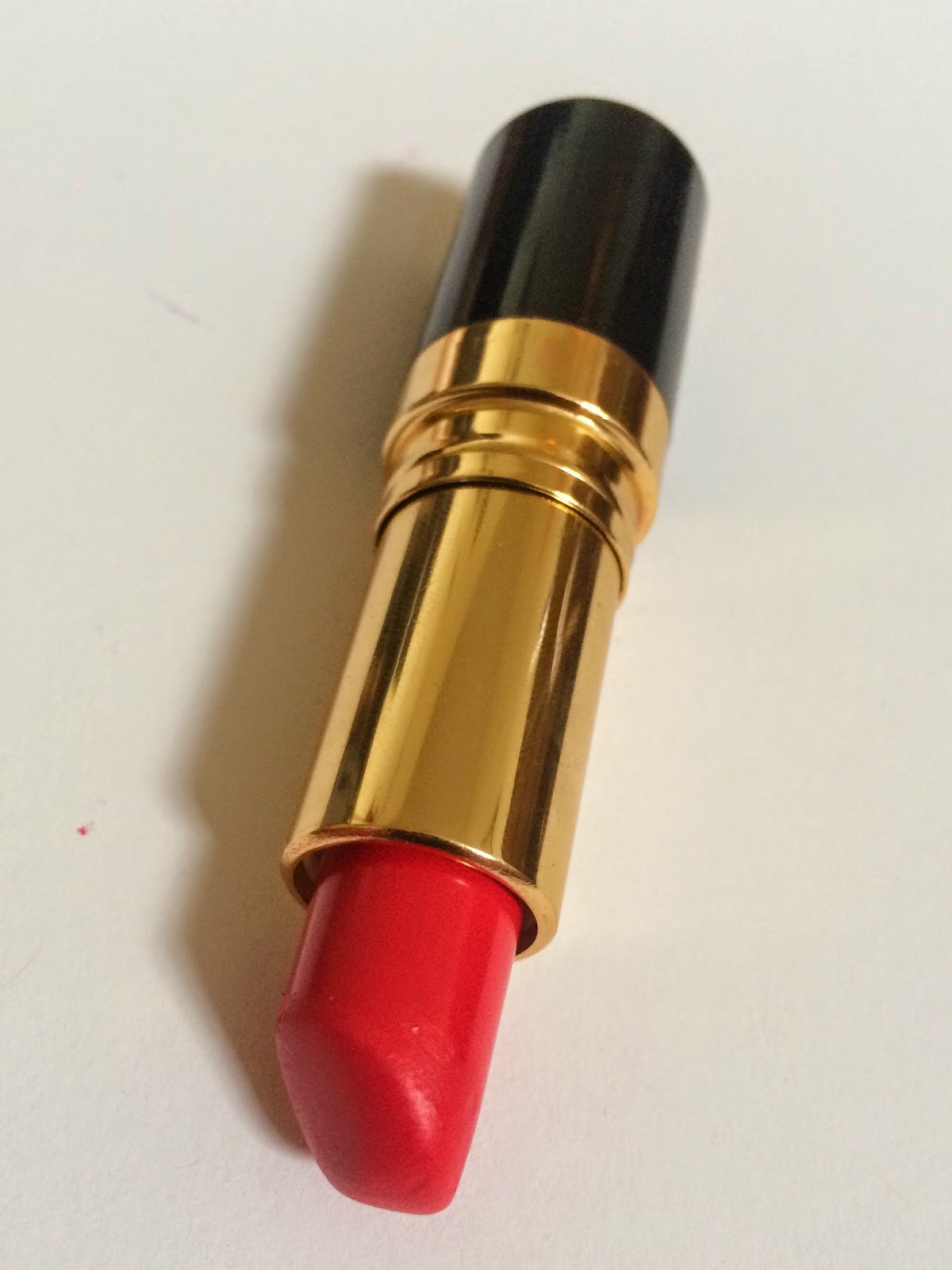 Reason for neglect: SO BRIGHT, YO. Flaming coral red, nothing icy about it.

Some people always have to be the center of attention. Every party is their party. Every conversation is an exercise in one-upmanship. Every personal setback is an apocalyptic disaster. These people can be exhausting, but they can also be charismatic and entertaining; the secret to enjoying their company is limiting your exposure to it. I feel the same way about Fire and Ice. It will outshine all your other makeup. It will try to wear you. It has to be managed carefully, and sometimes I don't have the energy to do that. But when I tried it on with Tony Moly Milky Violet earlier this week, I realized what I'd been missing. Few of my other lipsticks have that pow! factor. I think bright warm reds are such nice fall colors, too. We tend to associate coral with summer, but why not coordinate our lipstick with the changing leaves? 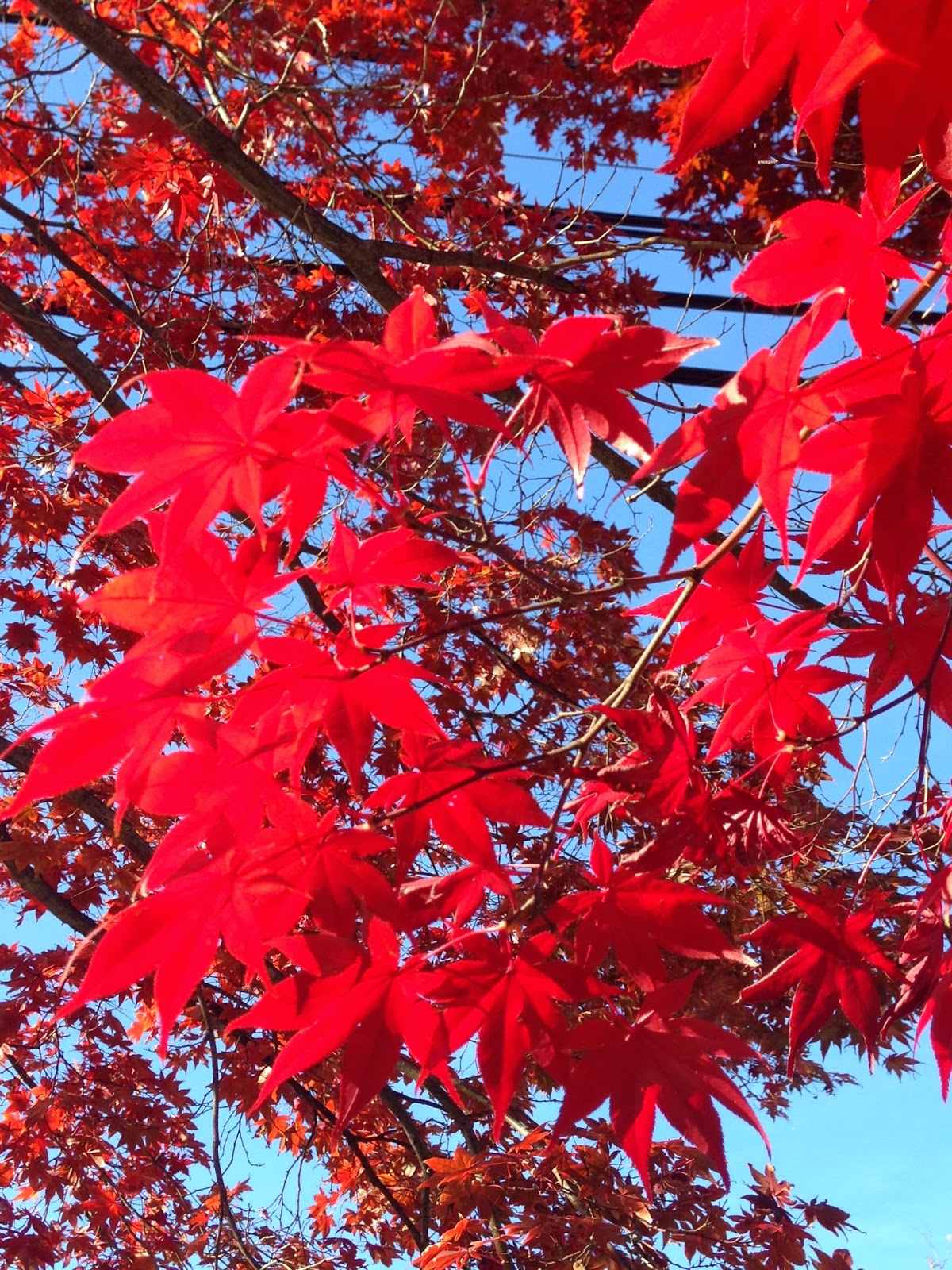 There's something very Heian Japan about these seasonal subtleties. Sei Shōnagon would approve.

6. Revlon Cherries in the Snow 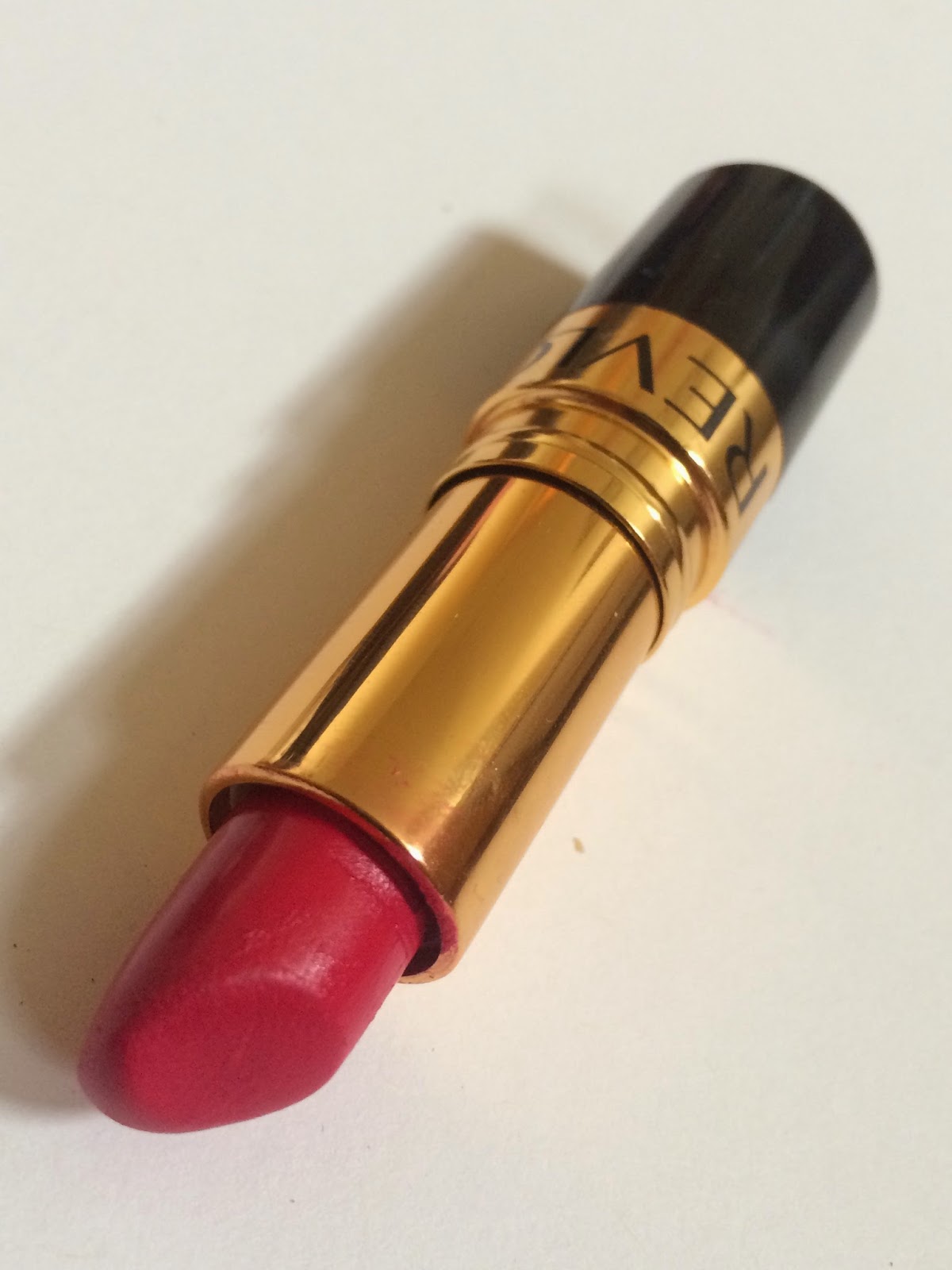 Reason for neglect: I wish I knew. Why do I find Cherries in the Snow almost as hard to wear as Fire and Ice? It's a reddish fuchsia, a color that theoretically suits me, but it looks slightly off against my complexion. Though I gushed over it back in February, I've worn it maybe once since then. I've had it for three years now, so I should really figure out a way to use it before it goes bad. 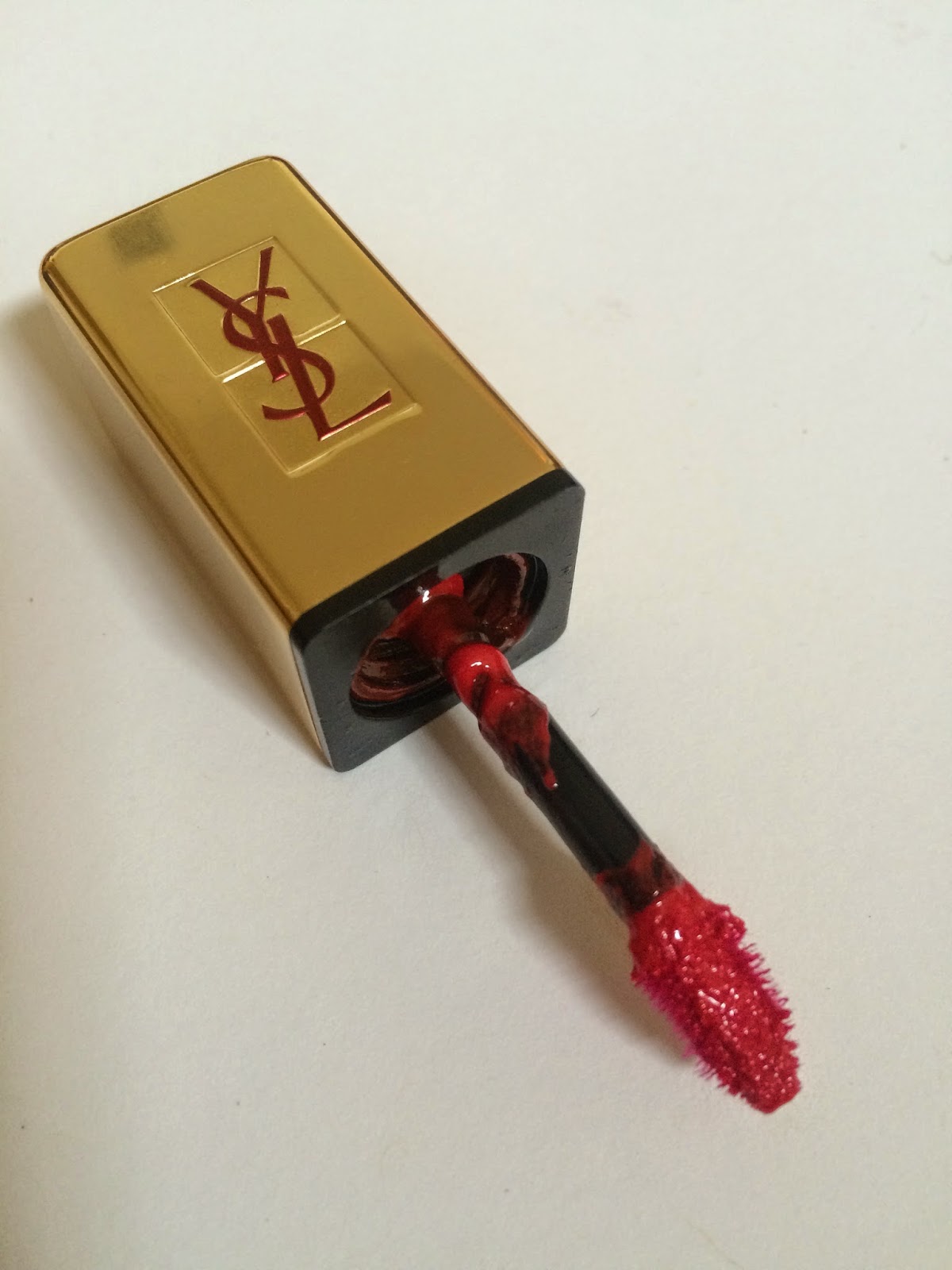 Reason for neglect: Oscar Wilde despaired of living up to his blue china; I despair of living up to my blue-red Glossy Stain. It's a supremely flattering color with an eye-catching lacquered finish. It kind of outclasses me. It certainly outclasses most of the places where I spend my time. But it's too pretty to save for special occasions, and it's not too good for me, damn it. It's colored fluid in a plastic bottle. I can do this.

So begins my Project Make-a-Dent. I'll report on my progress in a month or two!
Posted by auxiliary beauty at 8:31 PM