2014 in Review, Part 1: My 14 Most Disappointing Beauty Purchases

Well, I guess that was an eight-day hiatus! It crept up on me, as such things do. First the weather was gloomy for days on end, so I couldn't take decent photos. Then I took an overnight trip to visit a friend in another city. Then I spent a couple of days in DC for research, which was very pleasant until Wednesday afternoon, when I tripped over a curb in Capitol Hill, face-planted on the sidewalk, slammed my knee against the concrete, shattered my phone screen, and started sobbing, mostly from embarrassment. Now I'm back home, nursing my various bruises and preparing to leave for winter break tomorrow.

In addition to the physical clouds that have interfered with my photography, I've had a cloud of writer's block hanging over me for at least a month now. The writer's block is mostly academic, but it's also cast a shadow over my beauty blogging. In both cases, it's not so much that I don't know what to write; in fact, I have all too many ideas. The problem is that I don't trust myself to put those ideas into words. I write a sentence, think, "There must be a better way to say that," delete the sentence, and never write a new one. I start a post, save it as a draft, start yet another post, save that one as a draft, and never finish either draft. With regard to my academic work, my impostor syndrome is nothing new; but it's strange how I slip into that mentality even while blogging, given how low-stakes the process is. I don't know whether the solution is to take a break and hope for inspiration, or to plug away sentence by sentence and force myself not to hit the delete key, no matter how my writing sounds to my inner critic. At the moment, I'm opting for the latter. Let's see how this goes.

I've had a series of year-in-review posts planned for a while now. To ensure that I end the series on a high note, I'm starting my retrospective with a bit of a downer: 14 beauty purchases that disappointed me in some way or, indeed, in all ways. 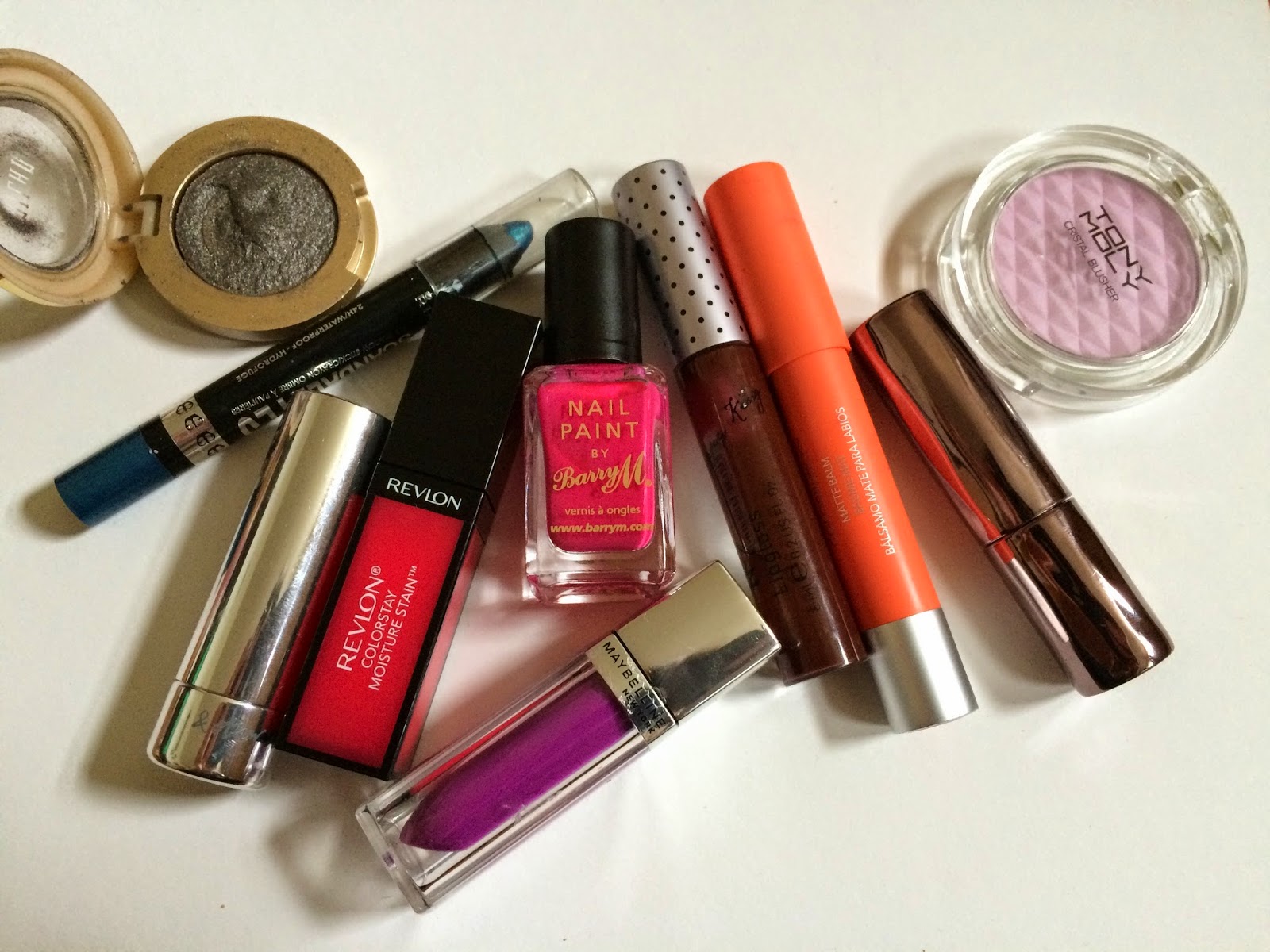 Not all of the items on my list are pictured above, because I've returned or given away a few. Most of the things I've kept have at least some redeeming qualities (and I'm not sure why I still have the ones that don't...). I can't find a clear pattern to my disappointing purchases, unless it's that I didn't have a chance to test most of them in person. But there are plenty of great products that I bought this year without swatching, so I don't know what to tell you. No more drugstore eyeshadows, is the only rule I can take away from this.

Below, I've listed the items in the order in which I bought them throughout the year, and linked to my own reviews where possible. Let's begin with my second beauty purchase of 2014... 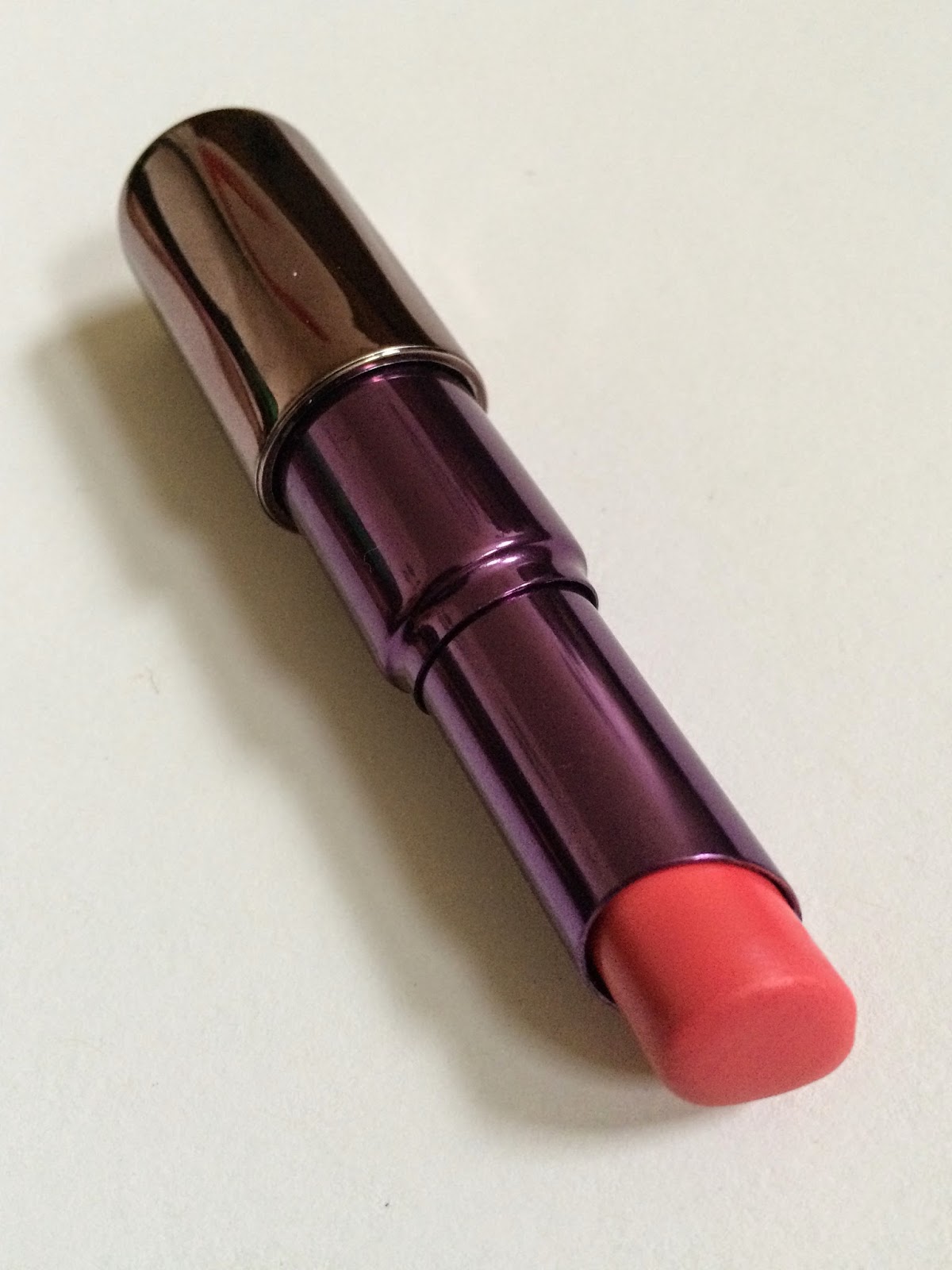 Am I the only lipstick fiend in the world to have been disappointed by Urban Decay's wildly popular Revolution Lipstick? I think I might be. Streak is a beautiful peachy pink, but it's more sheer than I was expecting, it clings to dry patches on my lips, it wears off within an hour or two, and despite its creaminess, it's drying over time. The lipstick rattles around within the metal tube when I apply it, and I detect a half-musty, half-metallic scent and taste every time I put it on.

What really frustrates me is that I actually tested Streak in Sephora before buying it. I wore it around the city! I gave myself a whole week to contemplate the purchase! And yet, somehow, I struck out. My experience with Streak has dissuaded me from buying any of the other Revolution Lipsticks, even though I've been tempted by Jilted for over a year now. 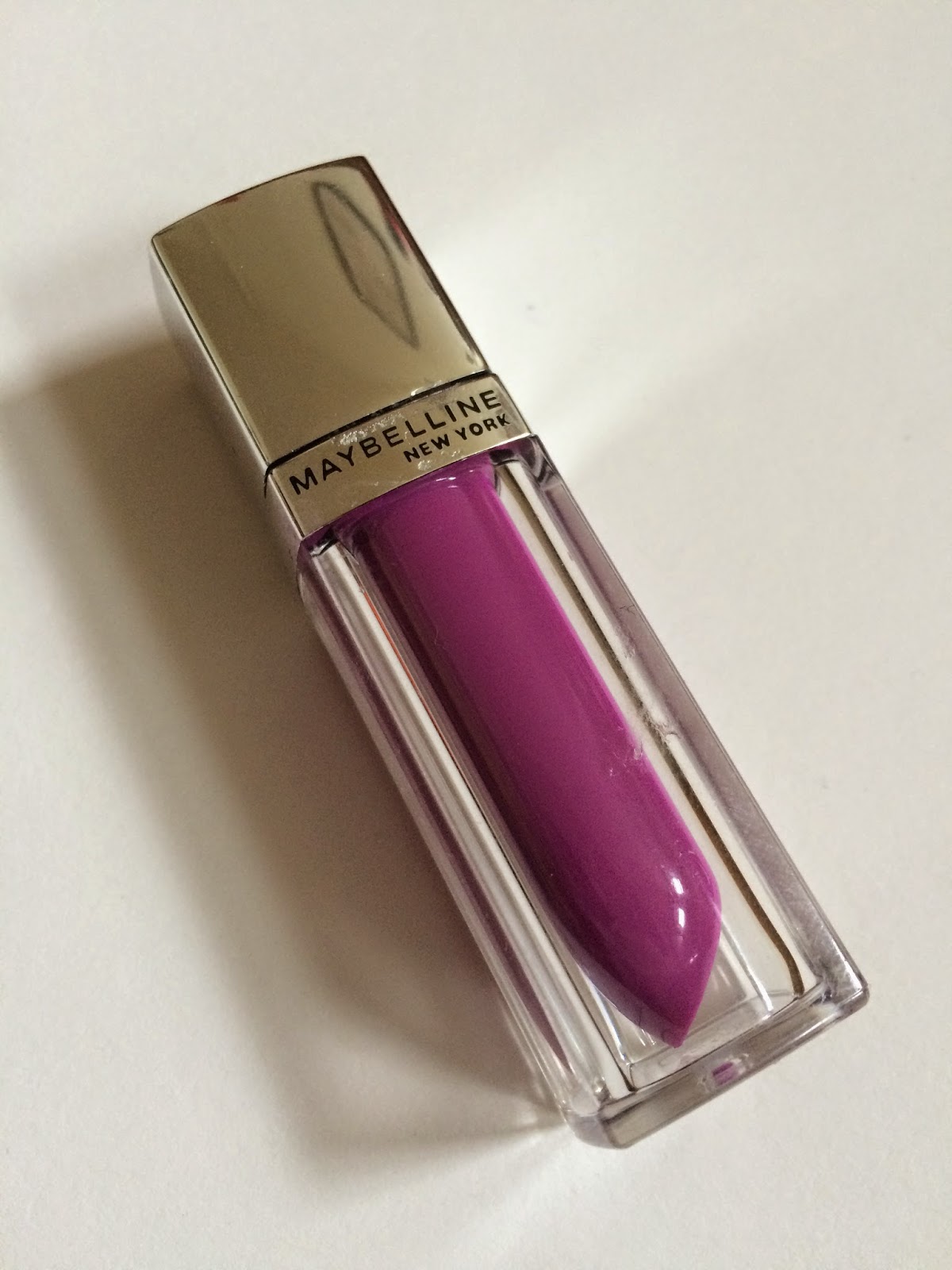 Maybelline's Color Elixirs are trendy lipstick/gloss hybrids along the lines of Dior's Fluid Sticks and Revlon's HD Lip Lacquers. I actually like the Color Elixir formula, which is opaque, non-sticky, and hydrating, though I could do without the strong floral scent. The problem with Vision in Violet is the color. It's my own damn fault: I wanted an opaque blue-toned purple gloss, and I got it. I just don't look very good in it. 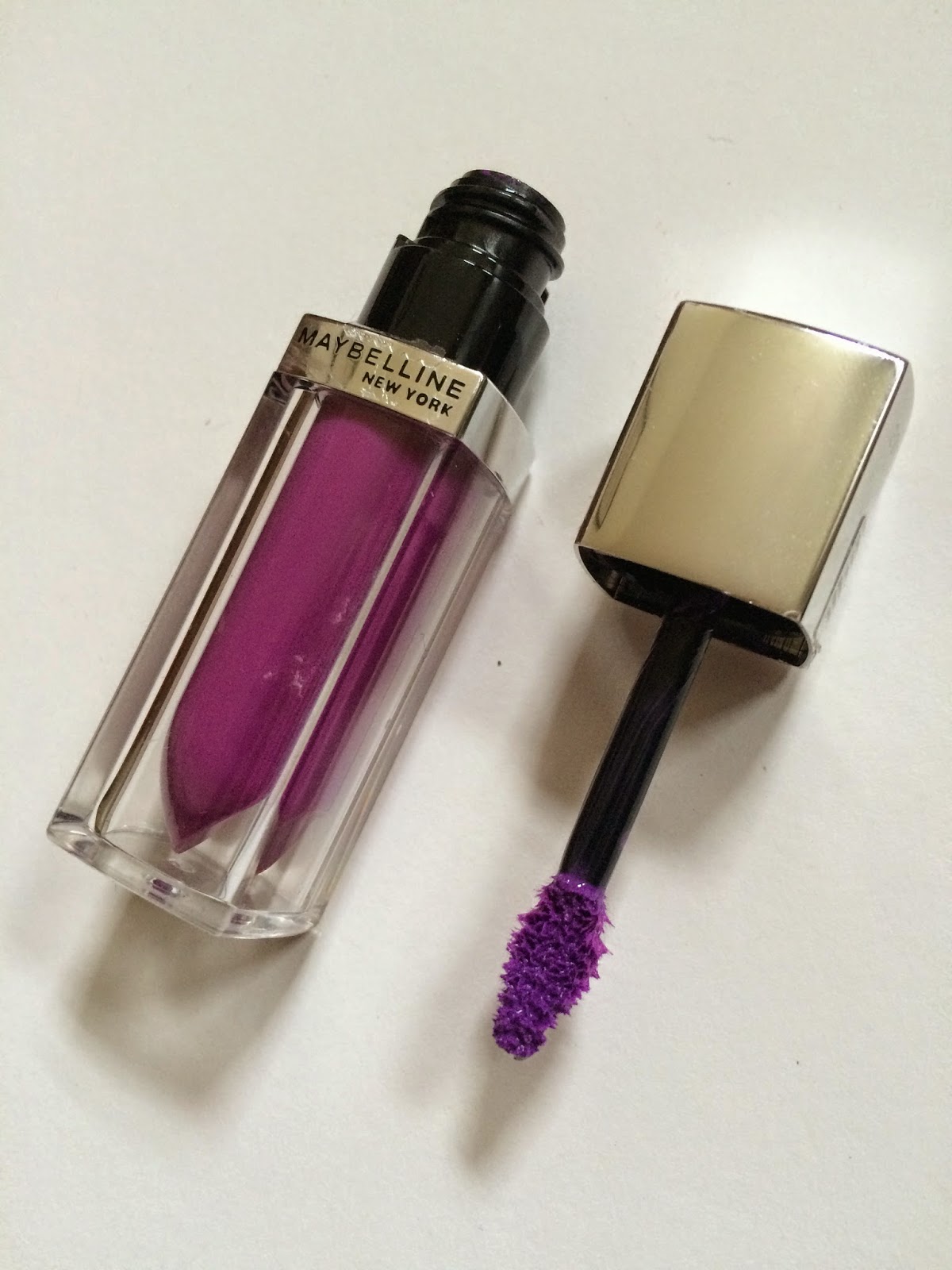 Vision in Violet gave me my first inkling that I might not be unambiguously cool-toned. I kept it in case I ever needed a vaguely science-fiction-y makeup look for a costume party, but so far I've used it solely to scare my boyfriend.

3. NYX Hot Singles eyeshadows in Dayclub, Burlesque, and After Party 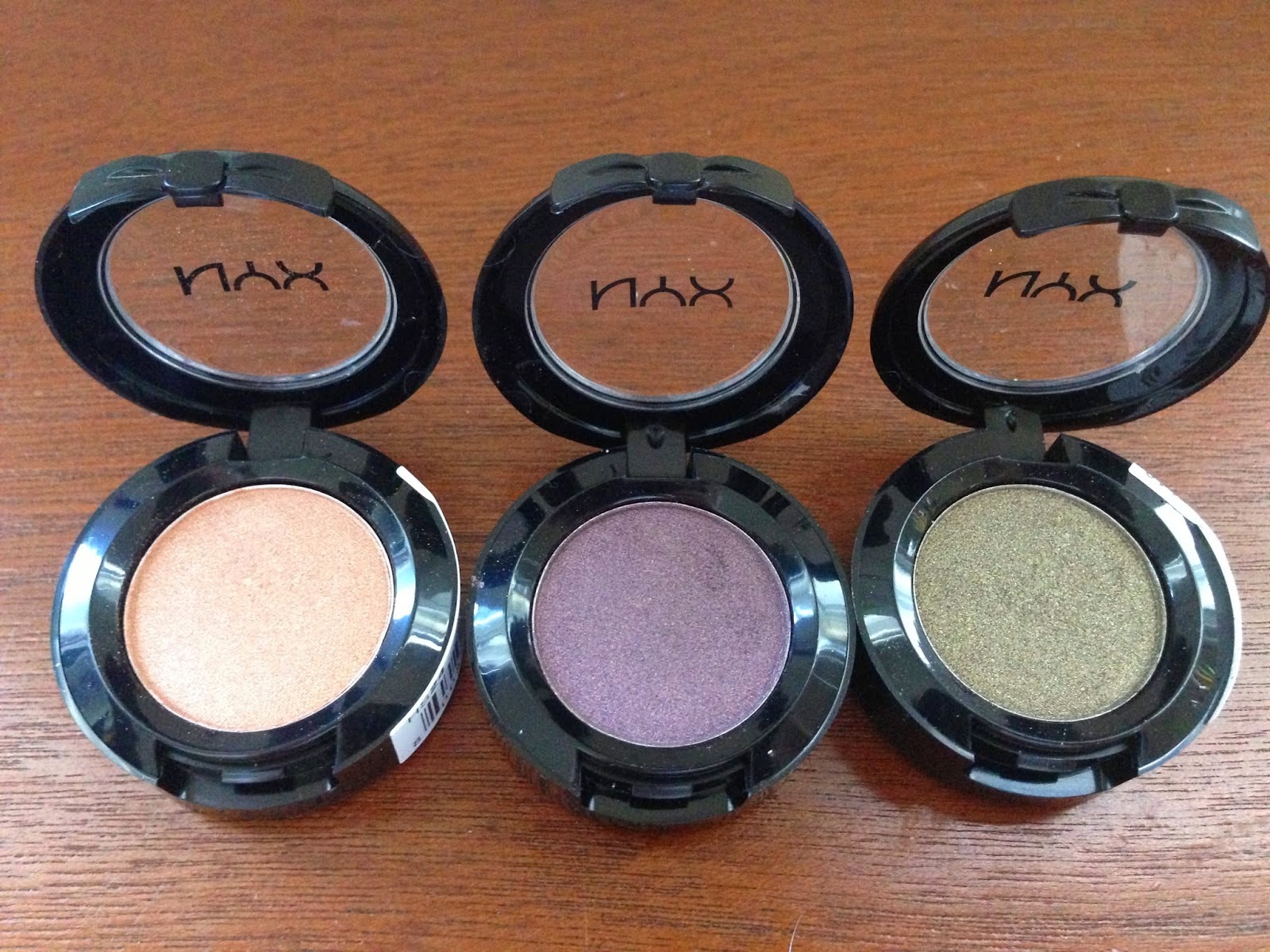 I've maligned these eyeshadows ad nauseam over the past nine months, so I'll keep this short. The Hot Singles are a recent reformulation of NYX's eyeshadow line, which meant that I couldn't find any detailed reviews of them back in March. I decided to take a chance and order three. Not only did the colors not match their descriptions on the NYX website (go on, tell me the middle one looks like an "iridescent dark purple"), but all three shadows were coarsely milled and practically invisible on my skin. I missed the return deadline and had to toss them. So it goes. 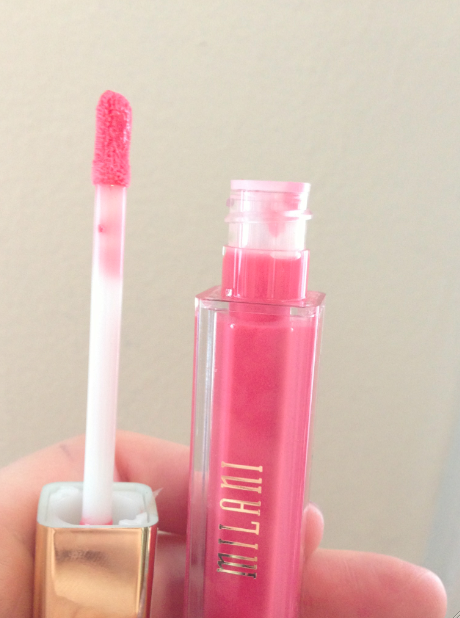 Returned this without a second thought. I don't like thick, sticky glosses, and this one was the thickest and stickiest I'd ever tried. When I wore it, I could actually feel my lips gumming together (ew ew ew I'm cringing as I write this). Sweet Grapefruit was one of my first Milani disappointments, but it would not be my last. FORESHADOWING. 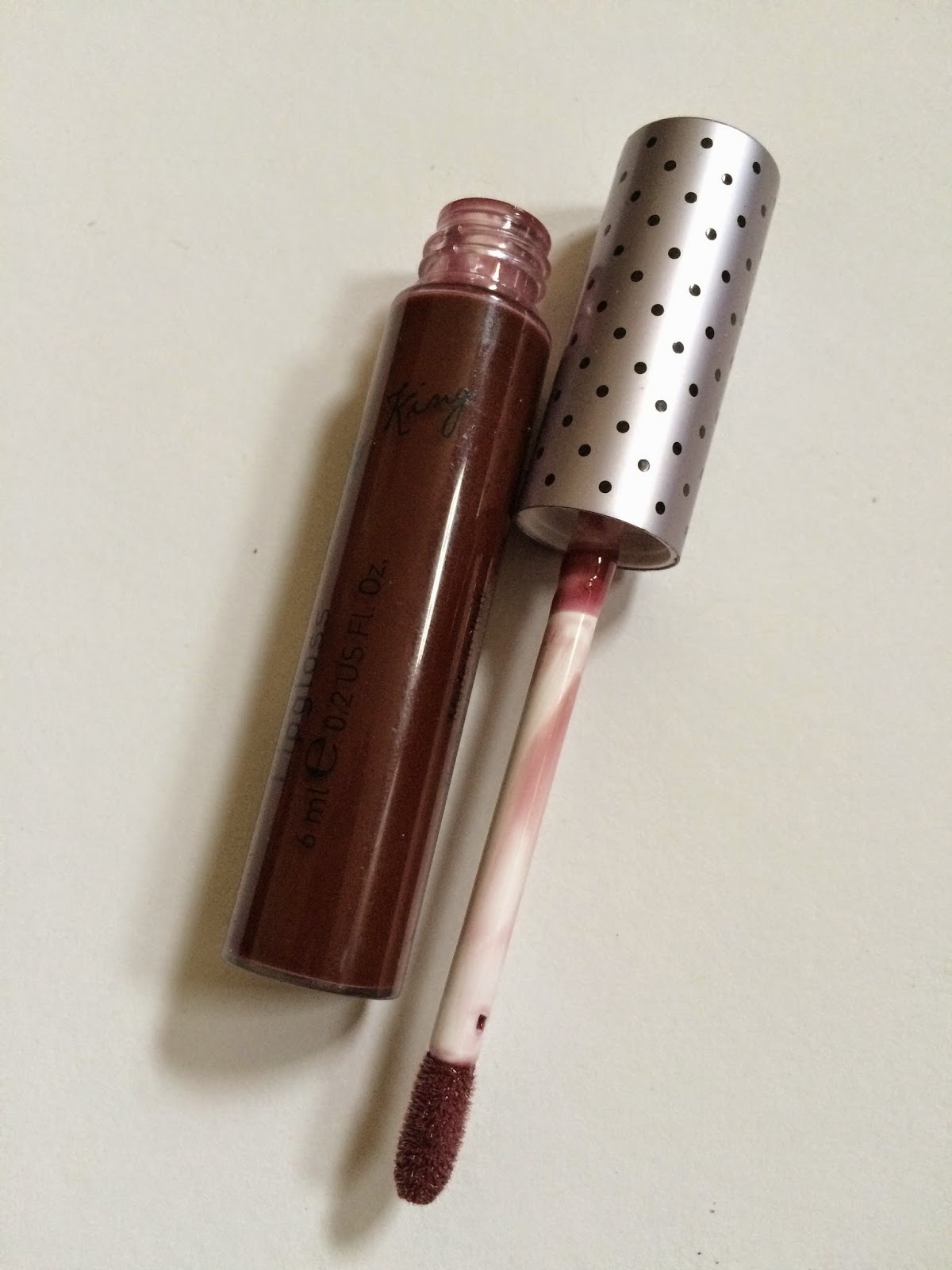 Earlier this year, my school store abruptly stopped selling Clinique makeup and started selling Boots No. 7, an odd choice for an American university. I bought Seduction in May, when the Poppy King glosses were on sale. What could go wrong, I thought, with a gloss bearing the imprimatur of the Lipstick Queen herself?

Quite a lot, it turned out. I couldn't bring myself to wear Seduction for more than a few minutes, due to its strong orange-spice scent. It was also much sheerer than it had looked in the tube, and it barely darkened my lip color. 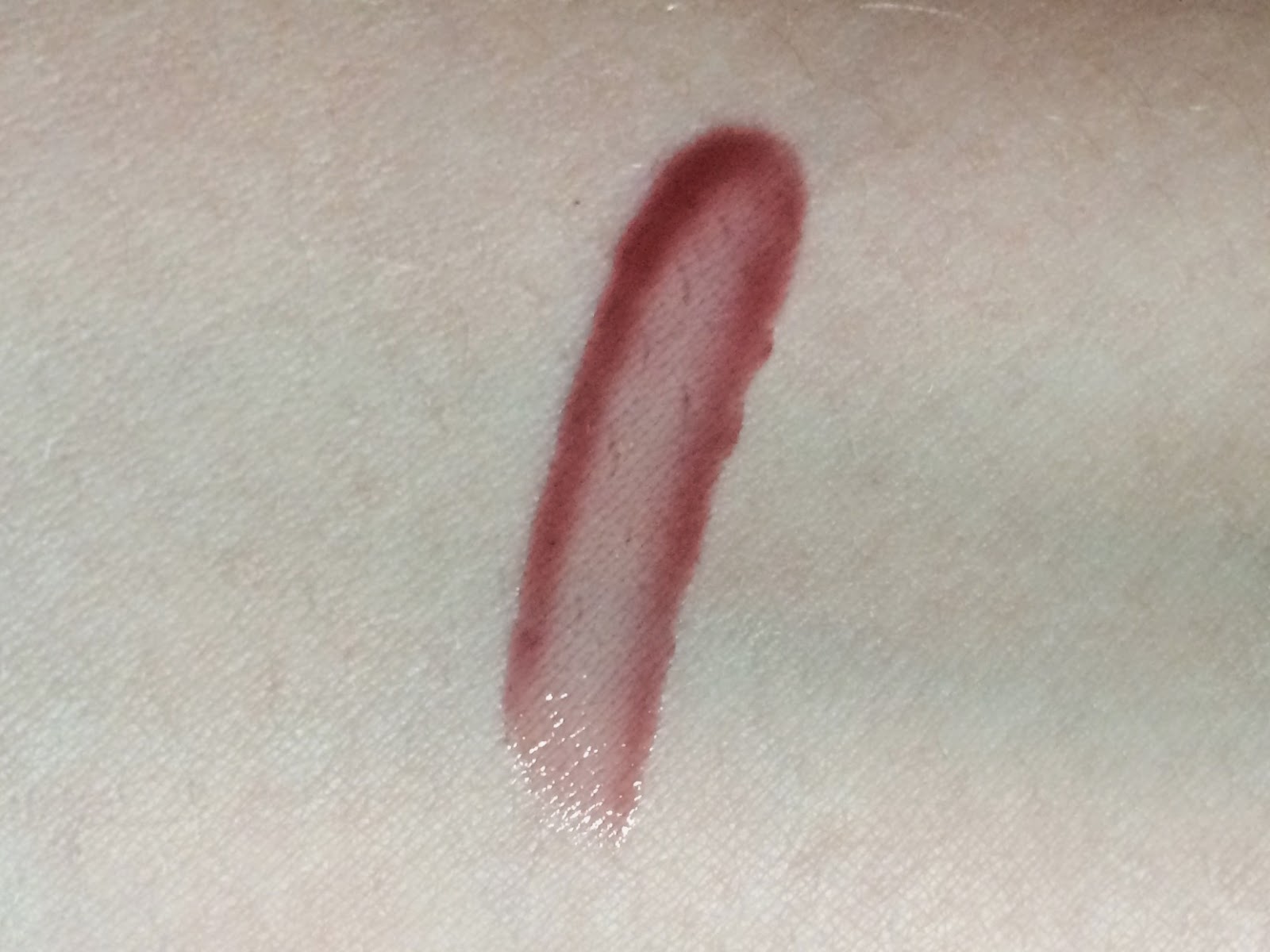 This one goes on the purge list, I'm afraid. 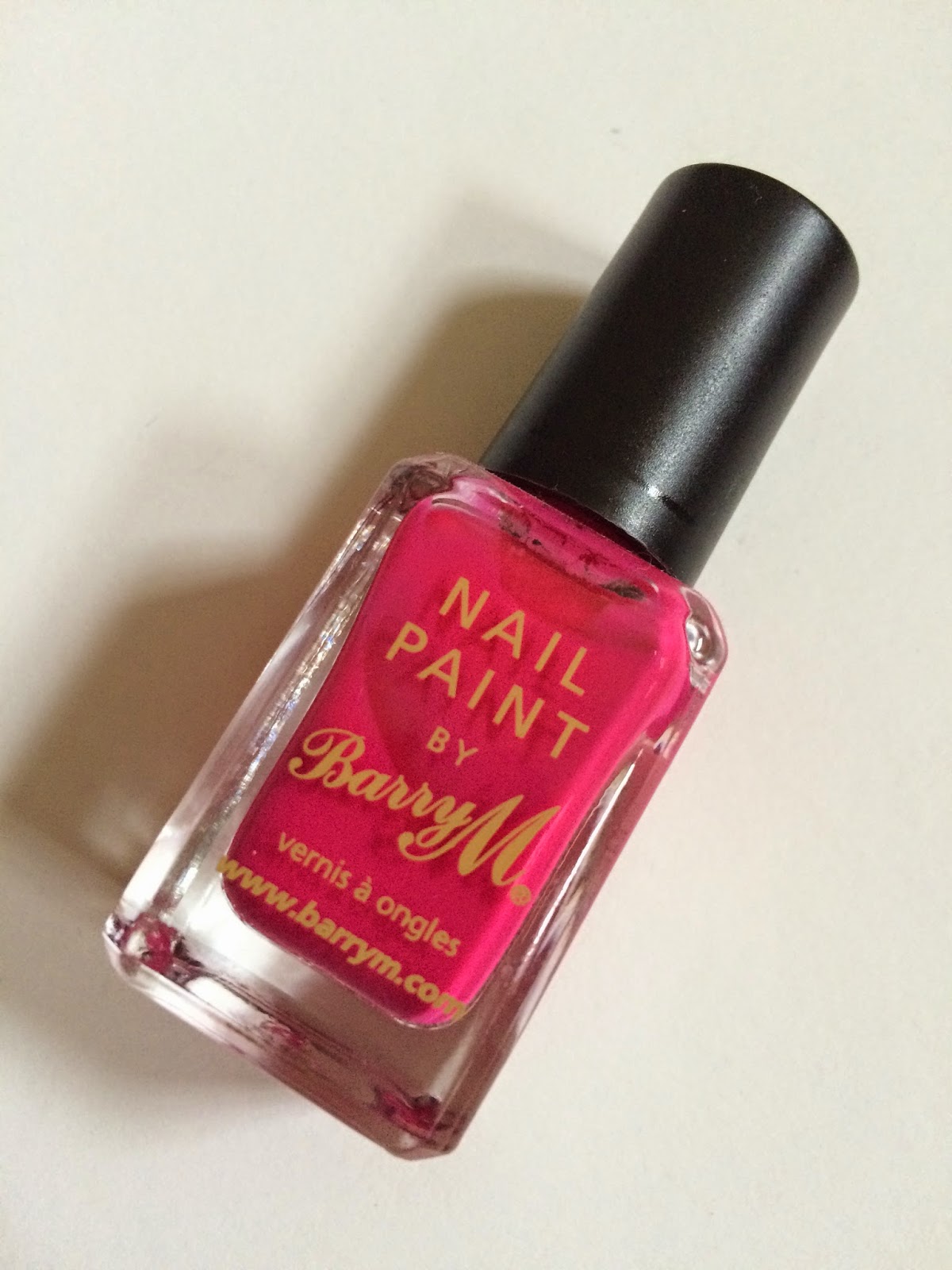 Having tried a few Barry M polishes during my stay in England, I confess that I don't get the hype. Yes, Barry M is a very cheap brand with a wide range of colors, but some of its formulas straight-up suck, and it's impossible to predict which ones will disappoint. Shocking Pink is an unexceptional fuchsia creme that chipped within a day. 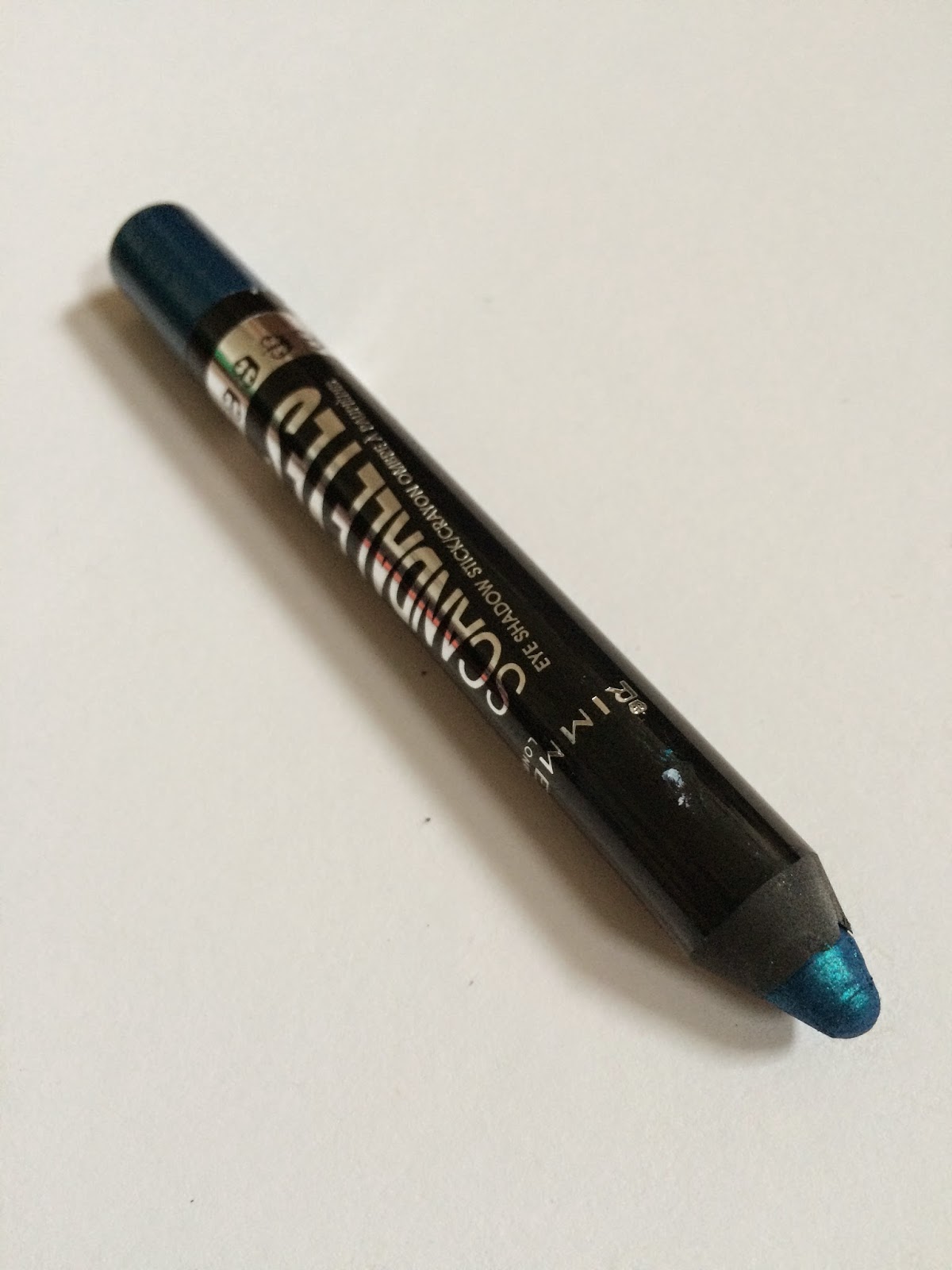 This wasn't technically a purchase, since I got it for free in a 3-for-2 sale at Superdrug, but I still regret choosing it over, I don't know, ANYTHING ELSE. It's a beautiful shimmery teal, but it's too thick to use as eyeliner and too stiff to use as eyeshadow, and it will. not. wash. off. It tints your skin turquoise for a whole day. If you make a mistake with it--which, due to the uncooperative formula, you almost certainly will--there's no way to erase that mistake. Plus, it turns out that I don't like how teal looks against my complexion. Another future purge, since I can't in good conscience give Blamed Blue to anyone I care about. Or, for that matter, anyone I don't. 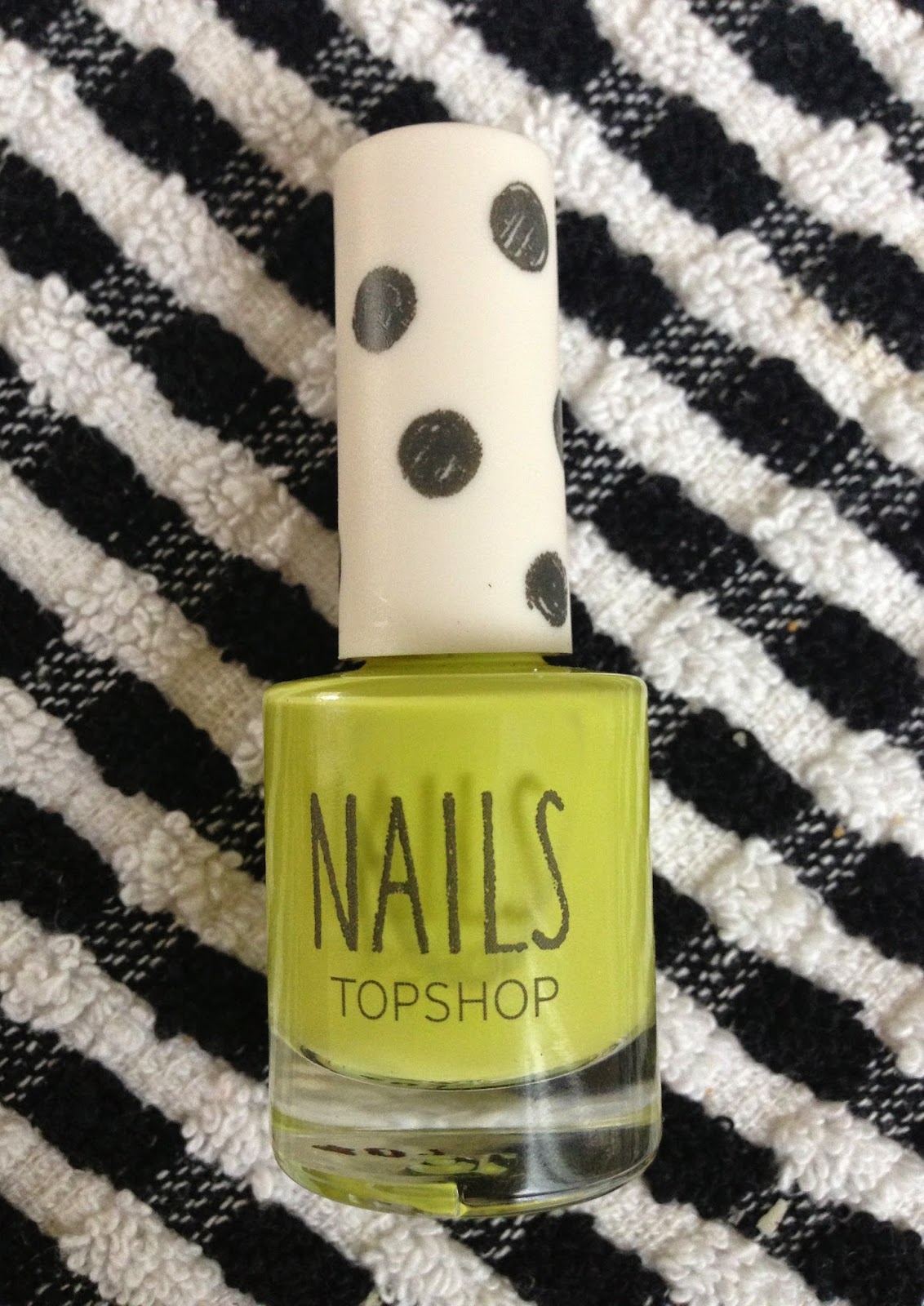 This creamy avocado green looked so pretty in the bottle, but it turned more yellow than green on my nails. Every time I glanced down at my hands, I half-thought I had a fungal infection. Luckily I have a friend who likes ugly-pretty polish colors more than I do, and she was happy to adopt Clique. 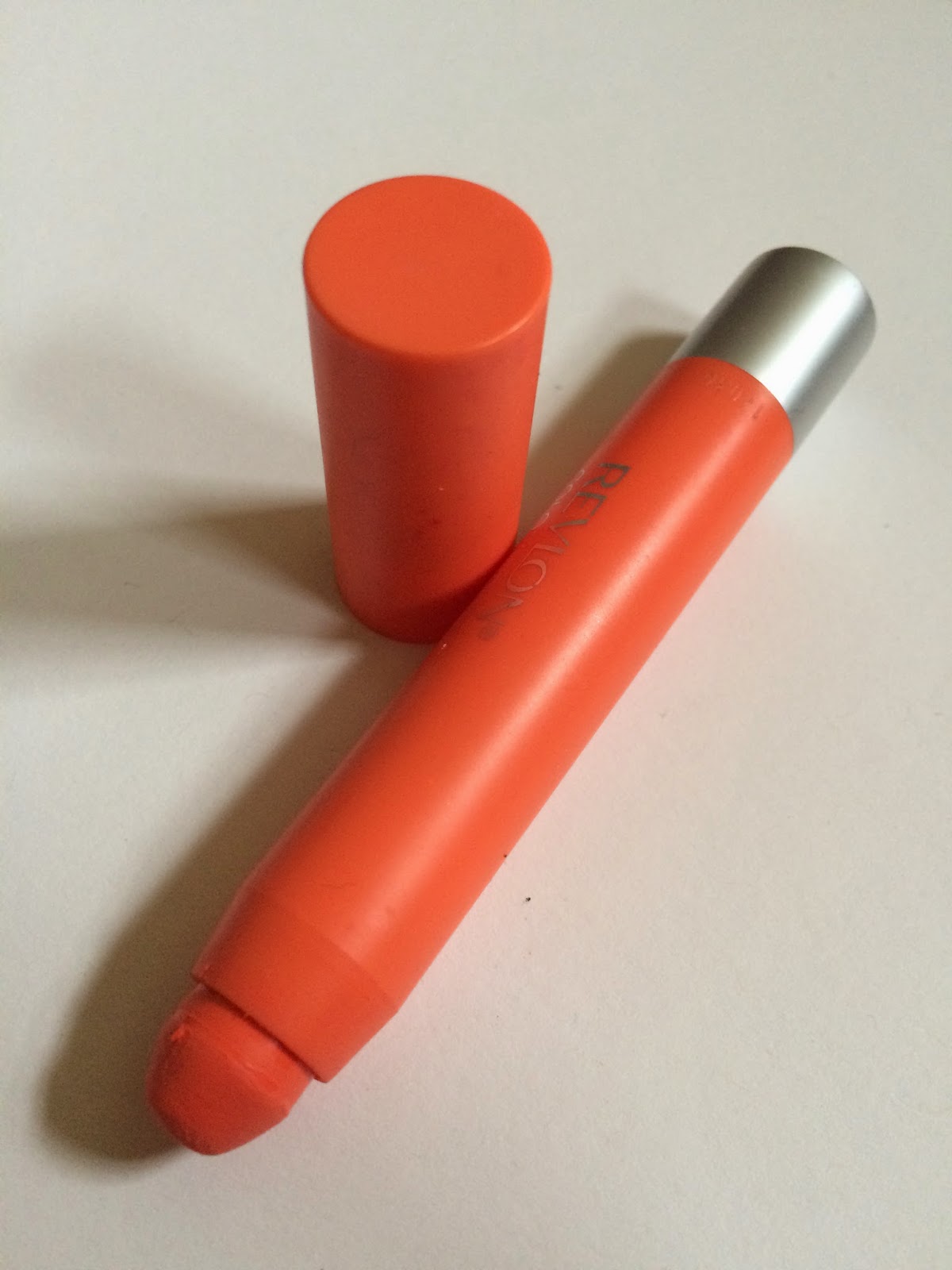 As I commented on Liz's recent review of MAC's silver-taupe Viva Glam Rihanna 2, "I've been seeking out strangeness in my lipsticks recently, too. I think it might be that I have every normal color at this point, and now there's nowhere to go but weird." This was certainly the impulse behind my purchase of Mischievous, a pale creamsicle orange. Instead of listening to the reviews that panned Mischievous for its unevenness and tendency to settle into lip lines, I decided I had to have it. Surprise: it applied unevenly and settled into my lip lines. It looks all right when my lips are perfectly smooth, but that happens about twice a year. What is it with pale orangey lipsticks and weird formulas? Is it just my luck, or is it some indelible pattern in the tapestry of the universe? 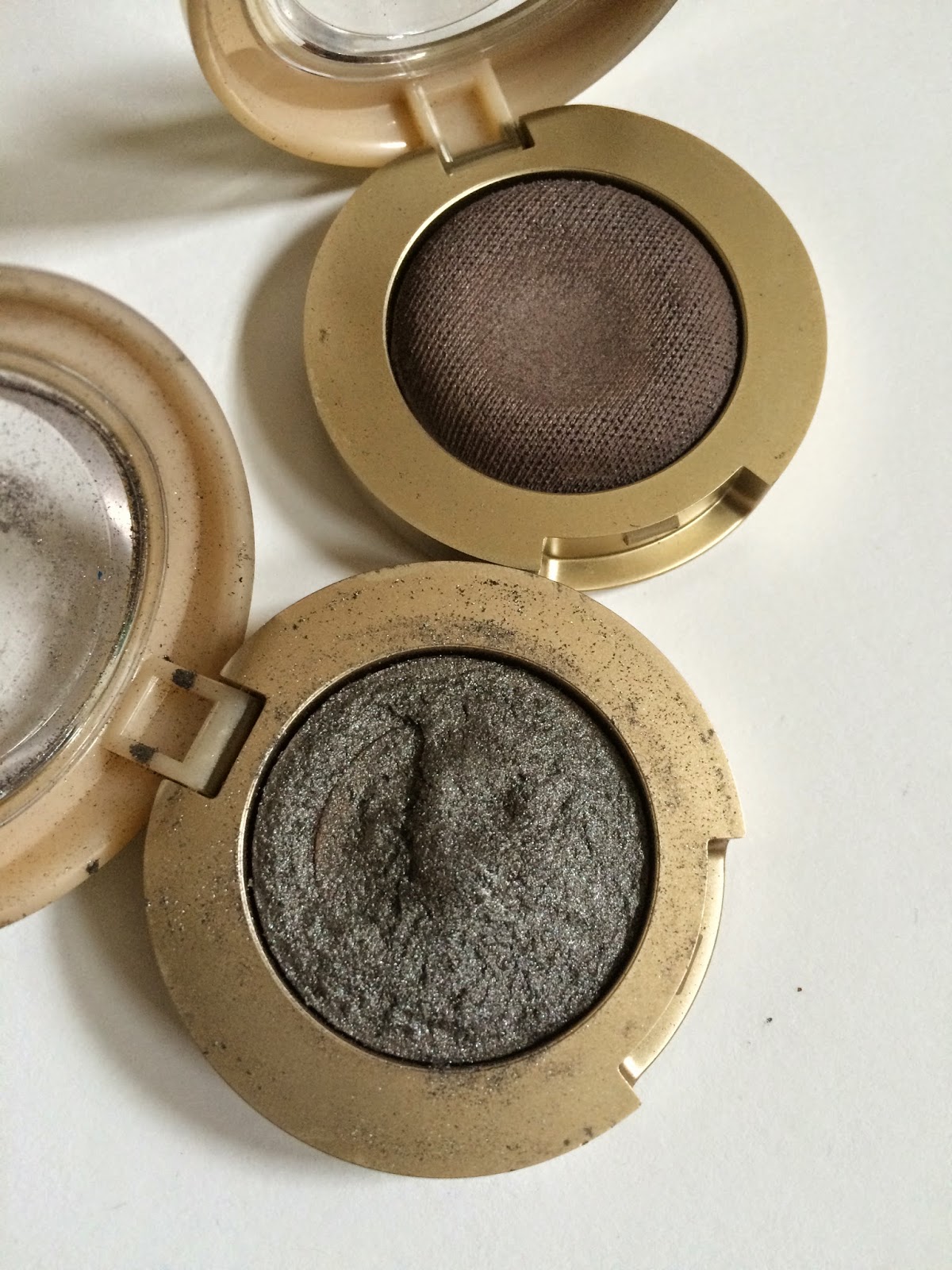 When you have a beauty blog, you sometimes feel a responsibility to test new makeup releases "as a favor to your readers," i.e. "because you have an addiction and can't justify it any other way." Such was my reasoning when Milani released Bella Eyes, a range of 30 eyeshadows in three different finishes. (I guess 2014 was the year of mediocre eyeshadow reformulations or something.) The Bella Eyes shadows are much better than the NYX Hot Singles, but they're still coarser and less blendable than I'd like. Even worse, the domed bit is prone to breaking off in transit, as evidenced by the cratered remains of Bella Charcoal above. 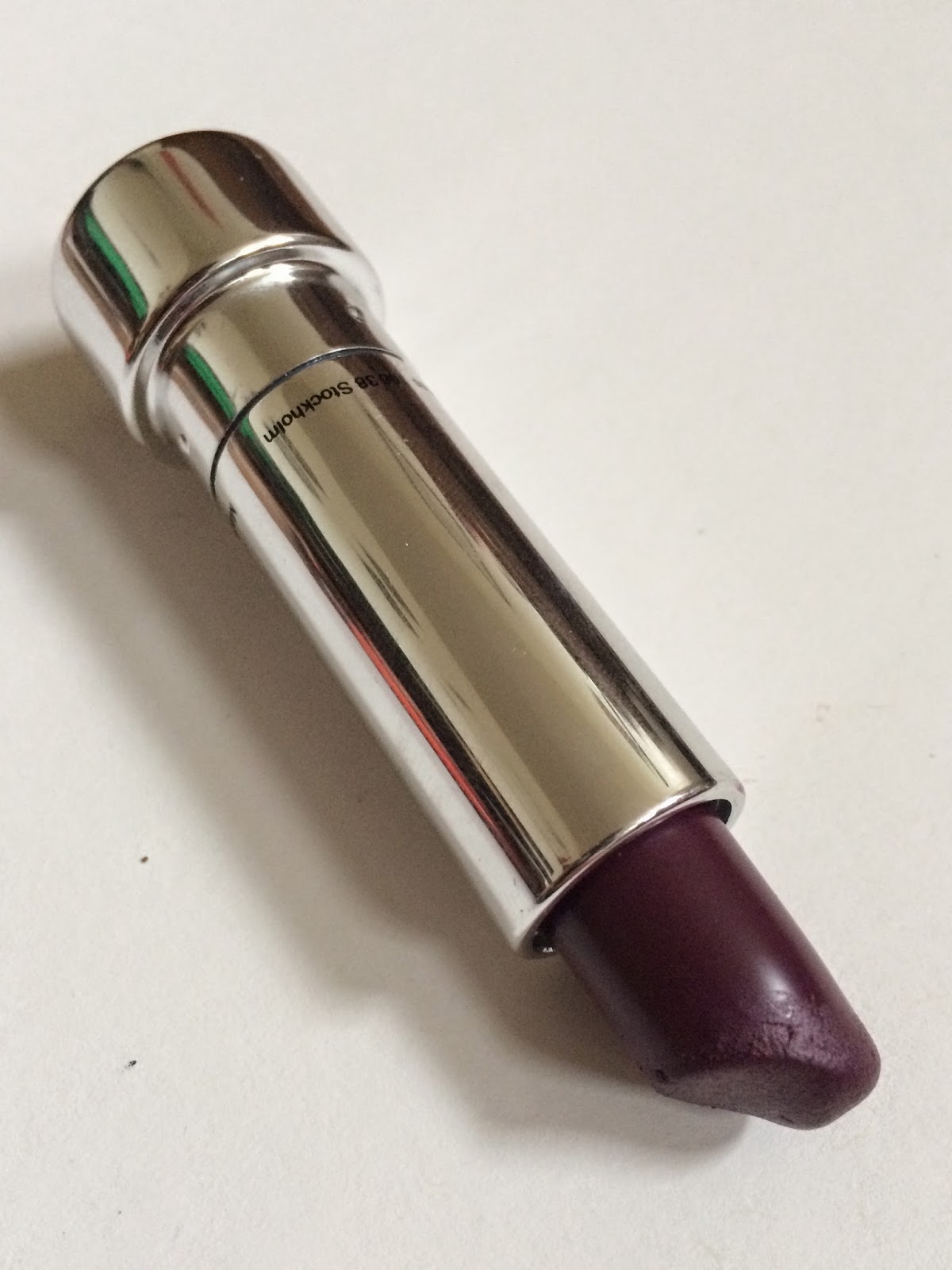 It pains me to put Droguet Purple on my worst-of-2014 list, because I think the color suits me and I feel nostalgic for the day I visited & Other Stories in London. But the lipstick is just too patchy and slippery to wear without a liner underneath, and even then it fades quickly--and longevity is essential when you're wearing a just-shy-of-black purple. 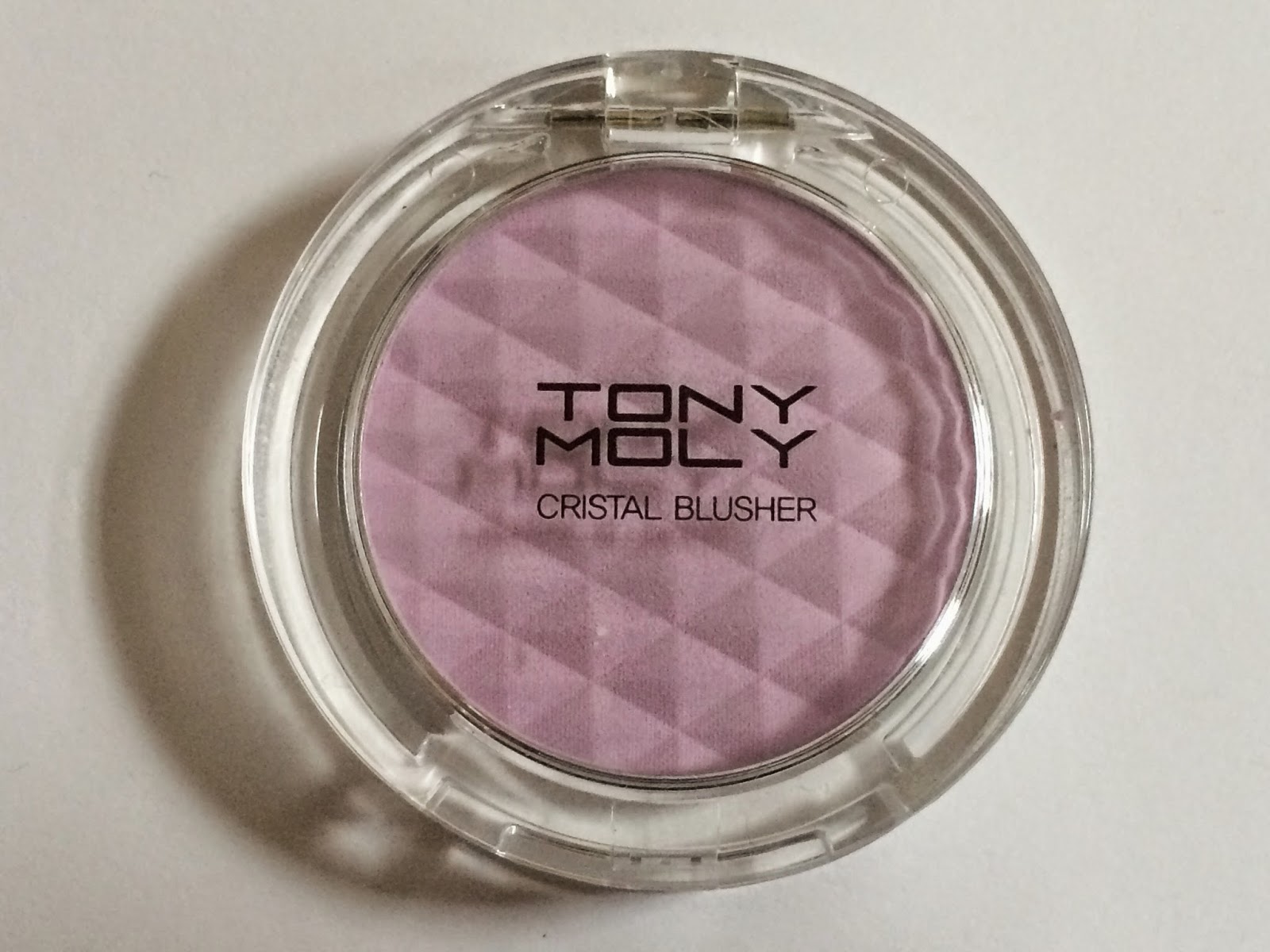 Where on earth can I find a purple blush that is 1) actually purple, not cool pink, and 2) not practically invisible? Tony Moly Milky Violet fulfills the first criterion but not the second. Having seen it worn by another pale person here, I assumed it would show up just as clearly on my own face, but Alyssa's warm complexion seems to provide a sharper contrast to the white-based lavender than my cool-neutral skintone does. 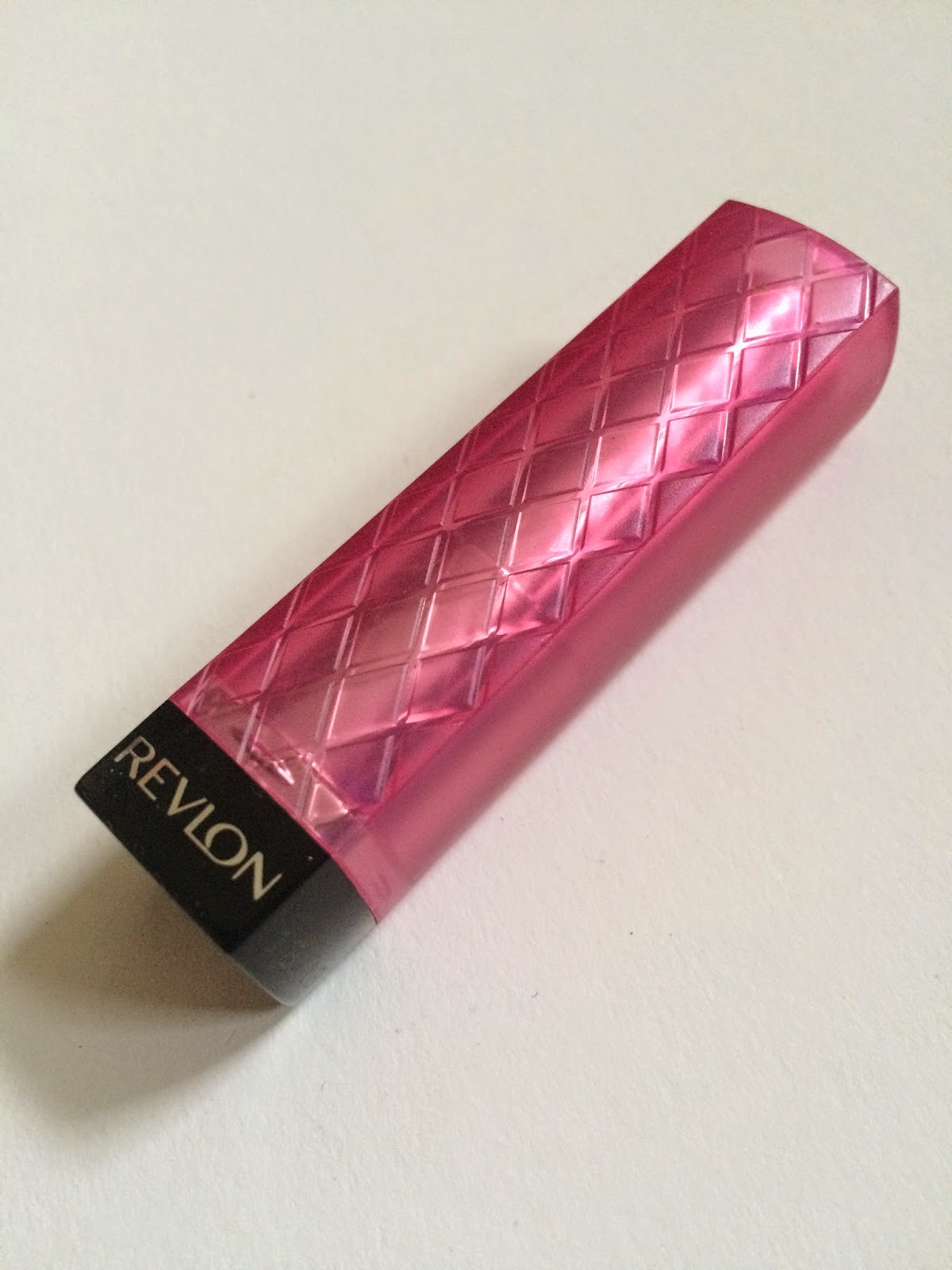 A million times meh. This sheer, shimmery fuchsia just wasn't special enough to keep. It did feel quite moisturizing, though, and I might have held on to it if I didn't already have several superior fuchsias. ("Superior Fuchsias" will be the name of my glam-rock band, which I will found once I teach myself to carry a tune and play an instrument.) 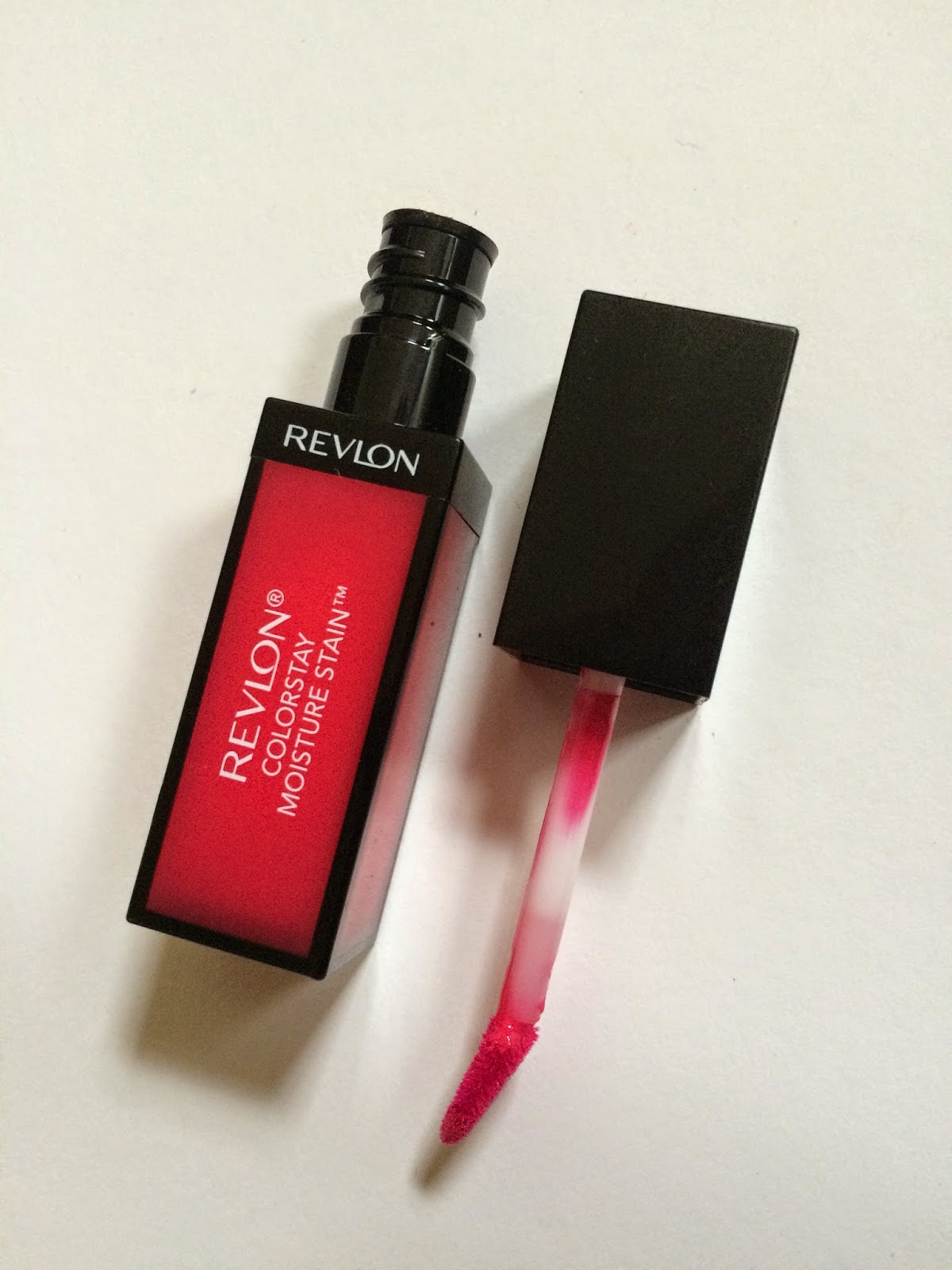 It's moist, but it's not really a stain. It's a very pretty color, though, so I've kept it. That might turn out to be a mistake. It's the end of the post and I'm running out of words. I should probably stop typing.

I'll try to post regularly from now on, though I can't count on having reliable Internet access for the next few days, and it's not easy to take photos with a phone whose screen is shattered to hell. Luckily I'm due for a new phone soon! In the meantime, let me know, because I'm curious: what was your most disappointing beauty purchase this year? Indulge my schadenfreude! It's almost Christmas, after all.
Posted by auxiliary beauty at 10:01 PM