Greetings from San Francisco, where I've spent the past few days recovering from jetlag and dissertating at neighborhood coffee shops. With three days of the old year remaining, it's time to post a list I've been compiling for the past month or so: my 14 favorite beauty purchases of 2014! A few notes before we begin:
The sticks (roughly speaking): 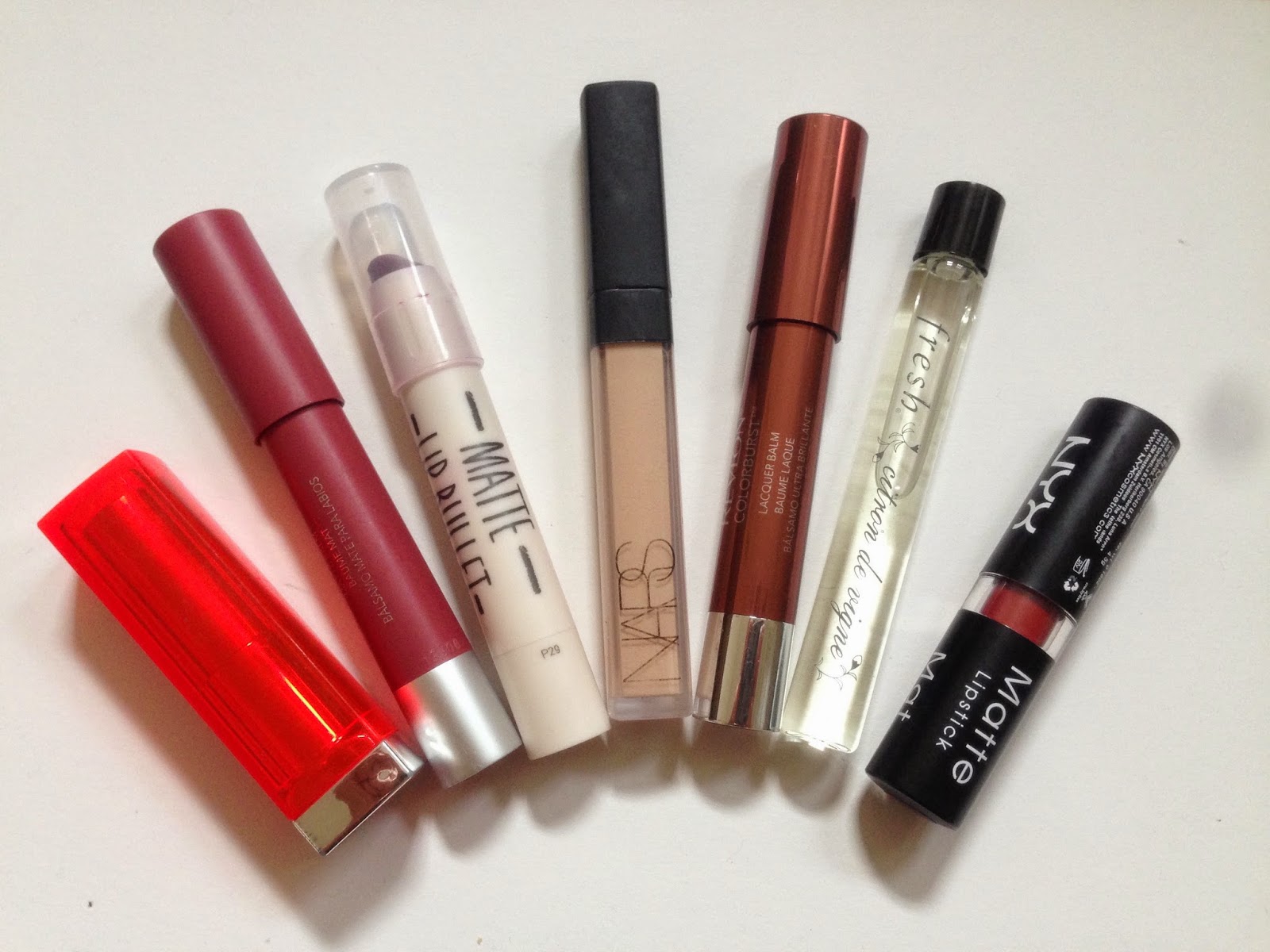 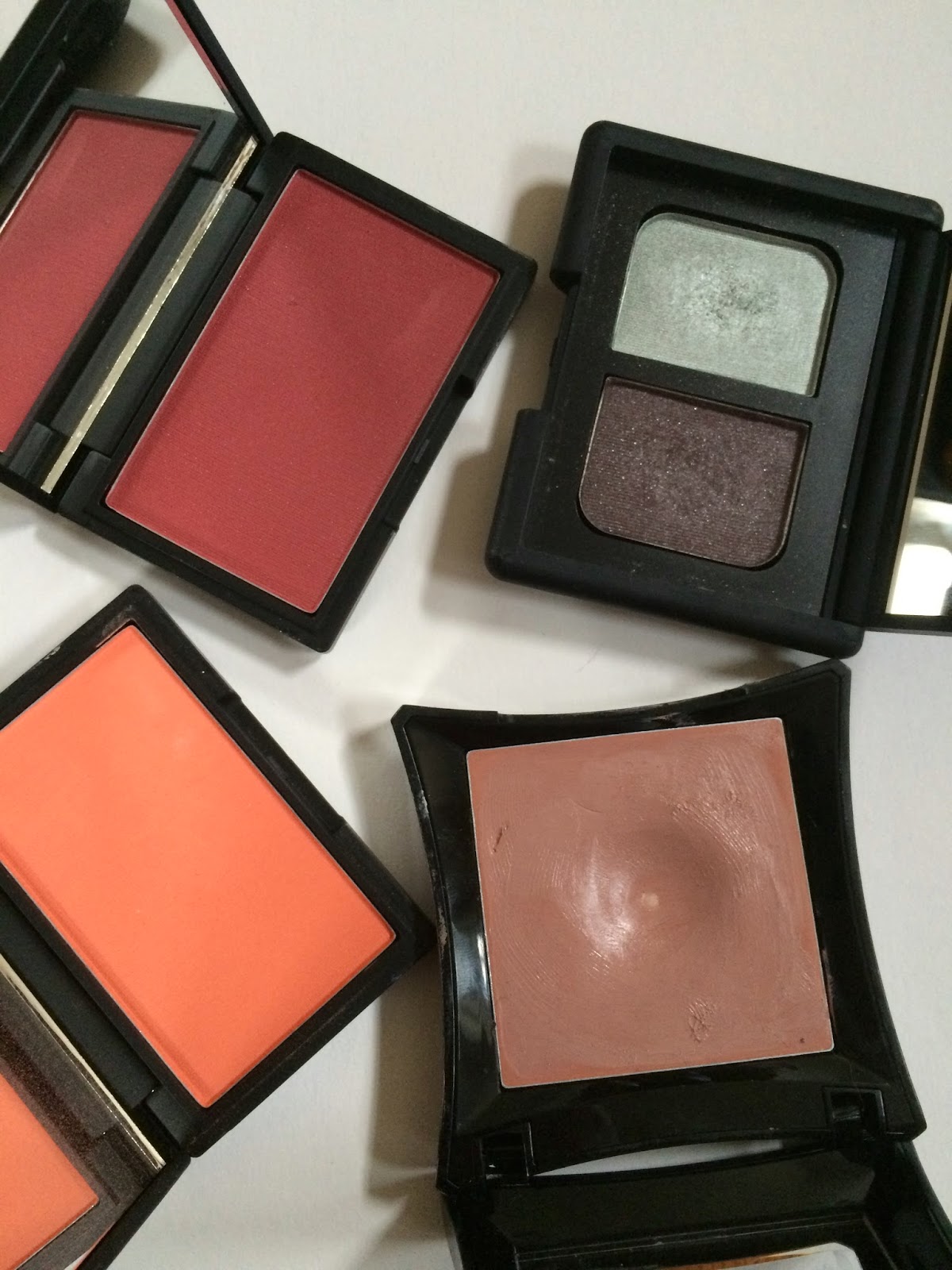 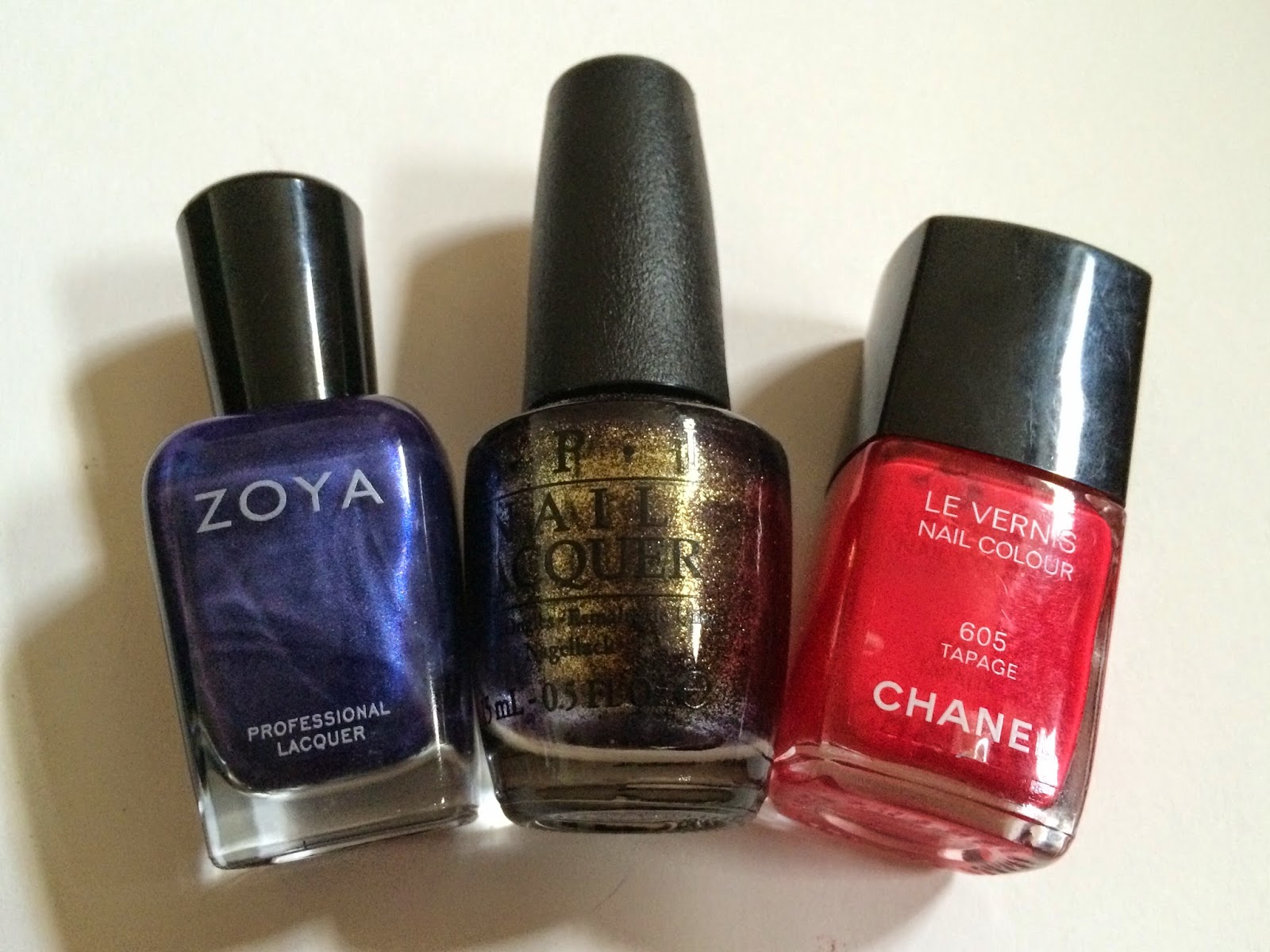 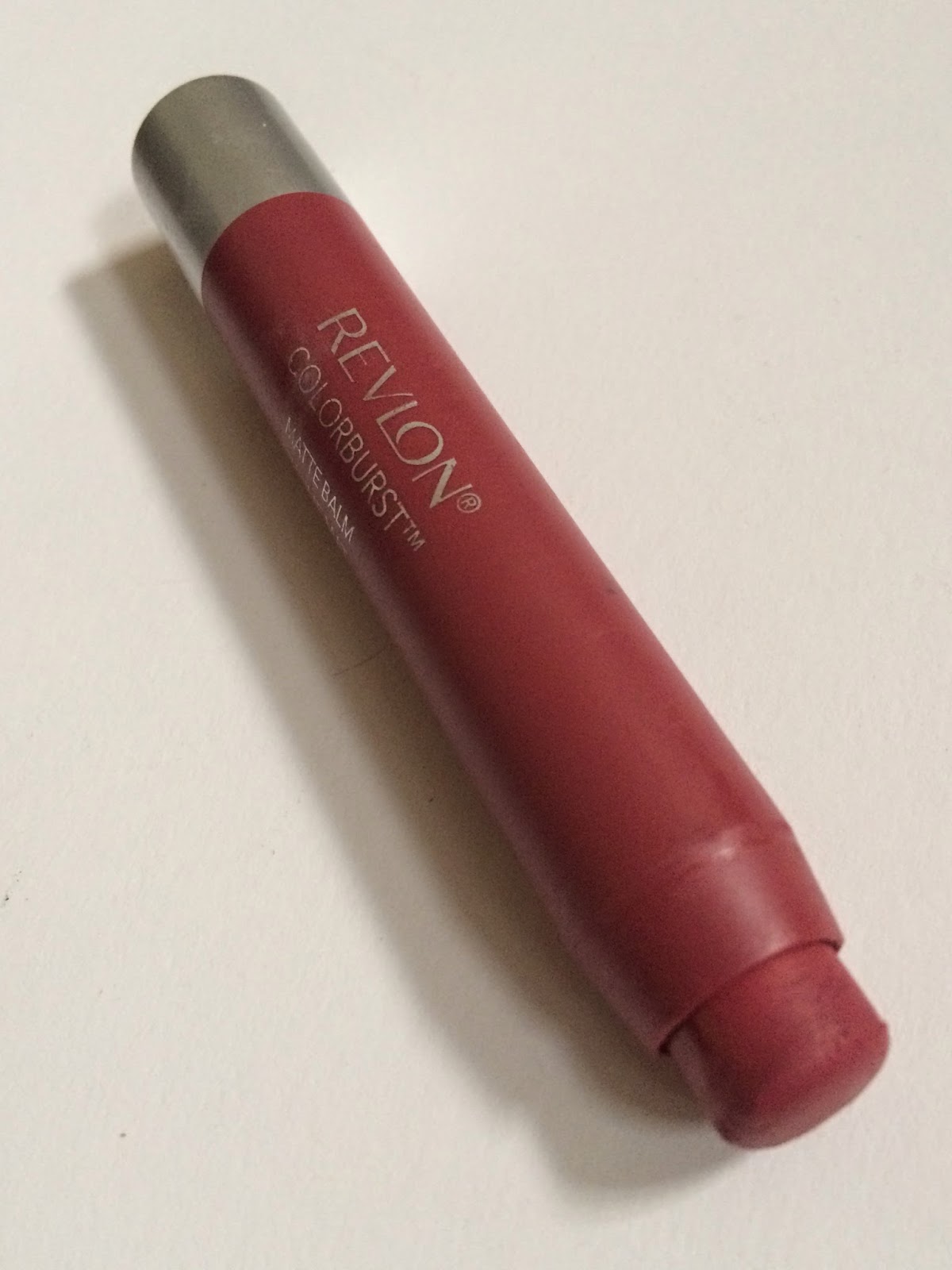 This was my very first beauty purchase of 2014, as well as my hardest-won. I visited at least half a dozen drugstores on both coasts before locating a tube of Sultry that hadn't been opened and smeared on some vulgarian's hand. But every minute of the search was worth it, because I think I wore Sultry more than any other lipstick this year. And yet, despite my great love for it, I still can't describe the color in fewer than nine words. "Dark rose with hints of brown, plum, and red" will have to do for now. Sultry's formula is matte yet plush; applying it feels like brushing a teddy bear's paw across my lips, and the color payoff is intense and even. I wish all the Revlon Matte Balms had such a great formula, but the other two I tried this year, Shameless and Mischievous, were patchier. 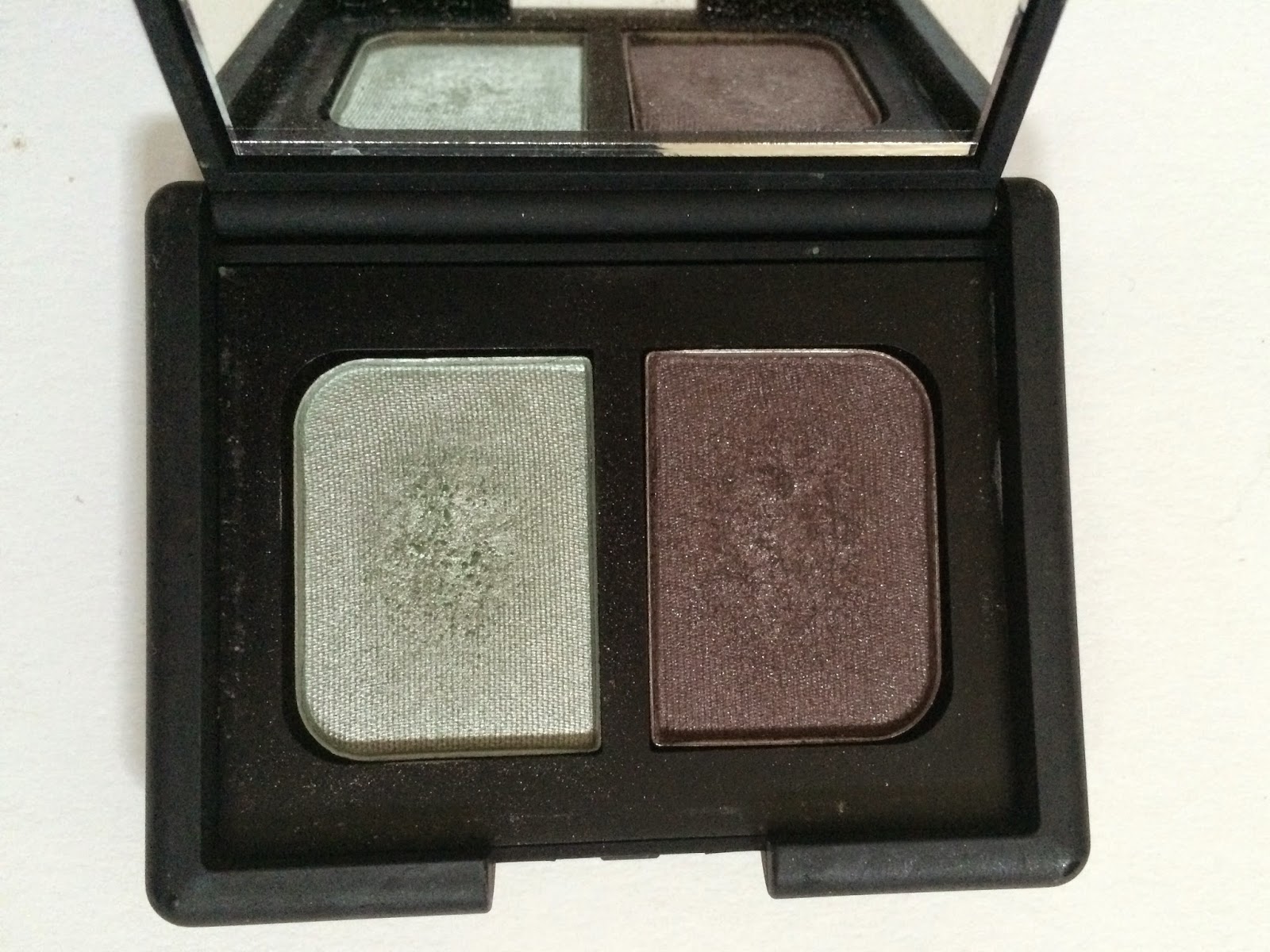 Who knew that an eyeshadow duo composed of frosty mint and sparkly plum would turn out to be so versatile? That's the genius of Habanera. In my earlier review, I called the duo "Arthurian-enchantress magical," and I stand by that epithet. The two shades look great together, but I tend to use them separately, in combination with neutral colors. The super-pigmented mint shade pairs well with taupes and grays, while the sheerer plum side complements browns and bronzes. I was initially disappointed that the plum lacked the pigmentation of the mint, but that just makes it more adaptable. Applied in one layer without primer, it's a demurely smoky neutral; when I build it up over primer, the minute particles of turquoise glitter come through. 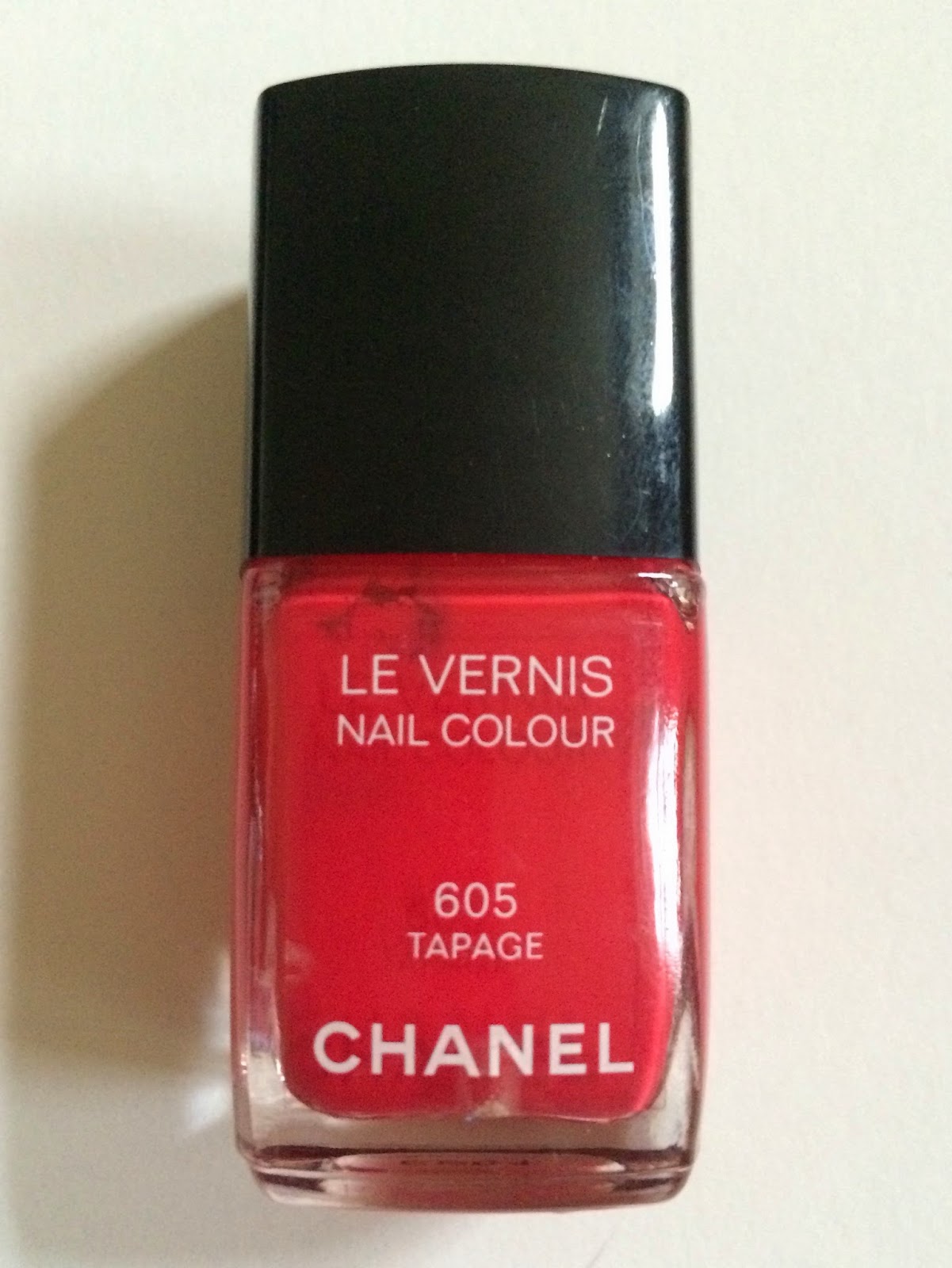 2014 may have been Pantone's year of Radiant Orchid, but I found myself drawn this year to all things coral-red. Tapage is a juicy pinky red just warm enough to deserve the name of coral, but not so warm as to pull orange. It applies smoothly and dries quickly, though it chips more easily than I'd like. But it's such a juicy, happy, summery color that I couldn't leave it off the list. 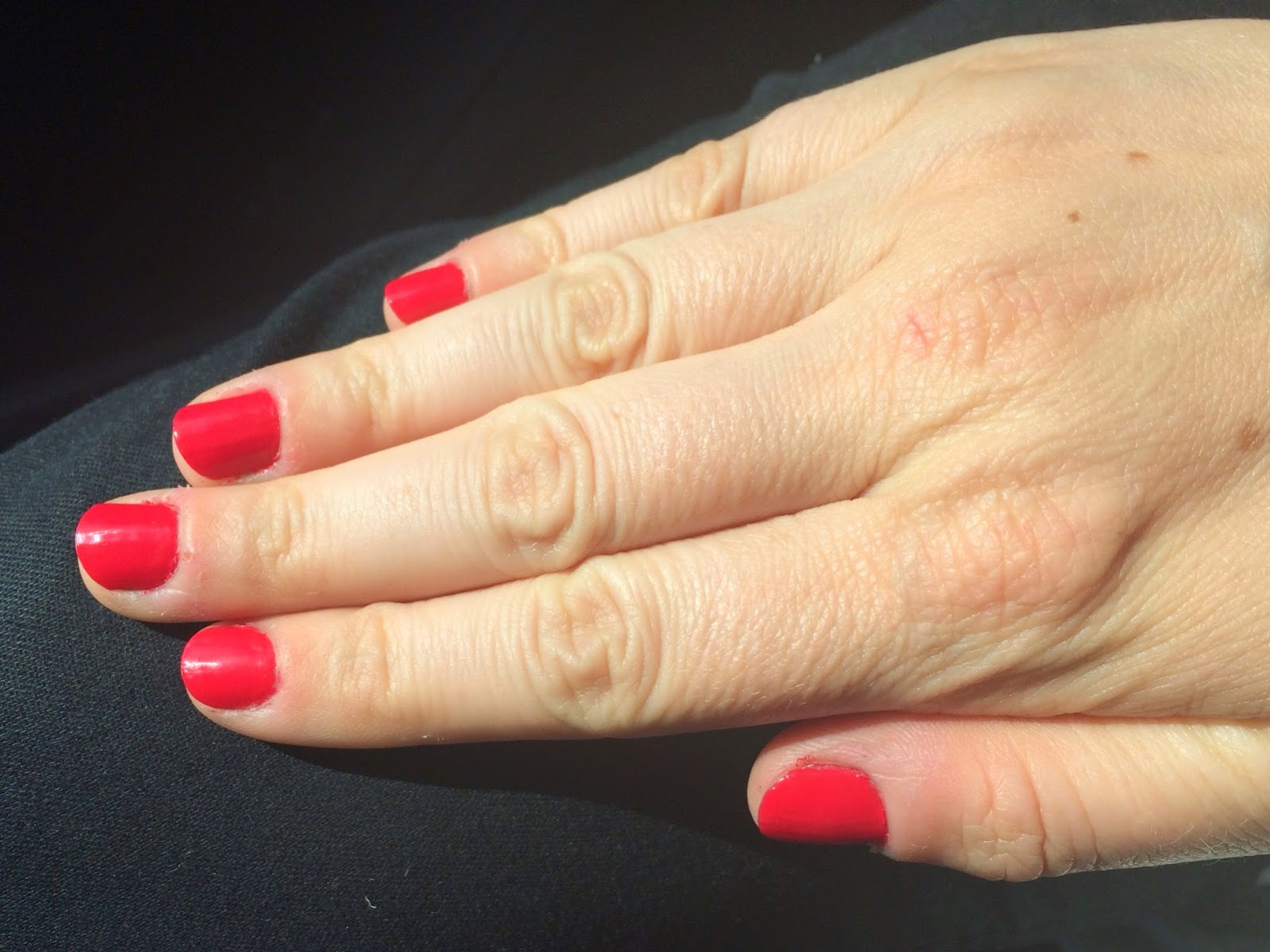 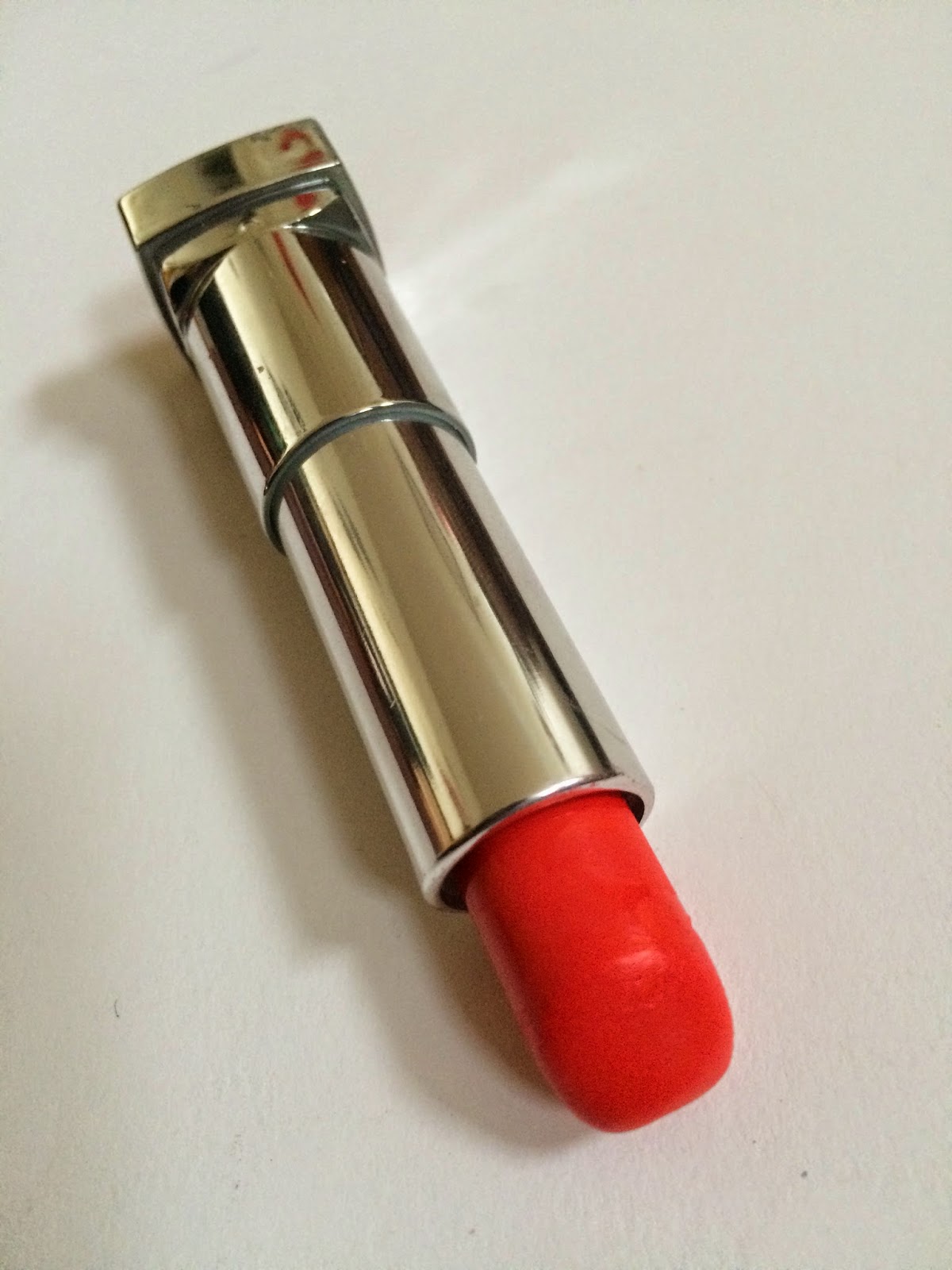 Vibrant Mandarin looks distinctly orange in the tube, but its jellied semi-sheerness allows my cool-toned lip color to peep through, creating a pinky corally red reminiscent of Tapage. Like the other Maybelline Vivids I've tried, Vibrant Mandarin is lightweight and hydrating; it's also longer-wearing than one would expect of such a shiny lipstick. Vibrant Mandarin accompanied me all over the world this year, from an academic conference at the University of York to a brunch place in Hollywood to a dinner with my boyfriend and his undergraduate adviser in Birmingham, and it never looked out of place. It also pairs perfectly with Habanera.

5. Sleek Blushes in Life's a Peach and Flushed 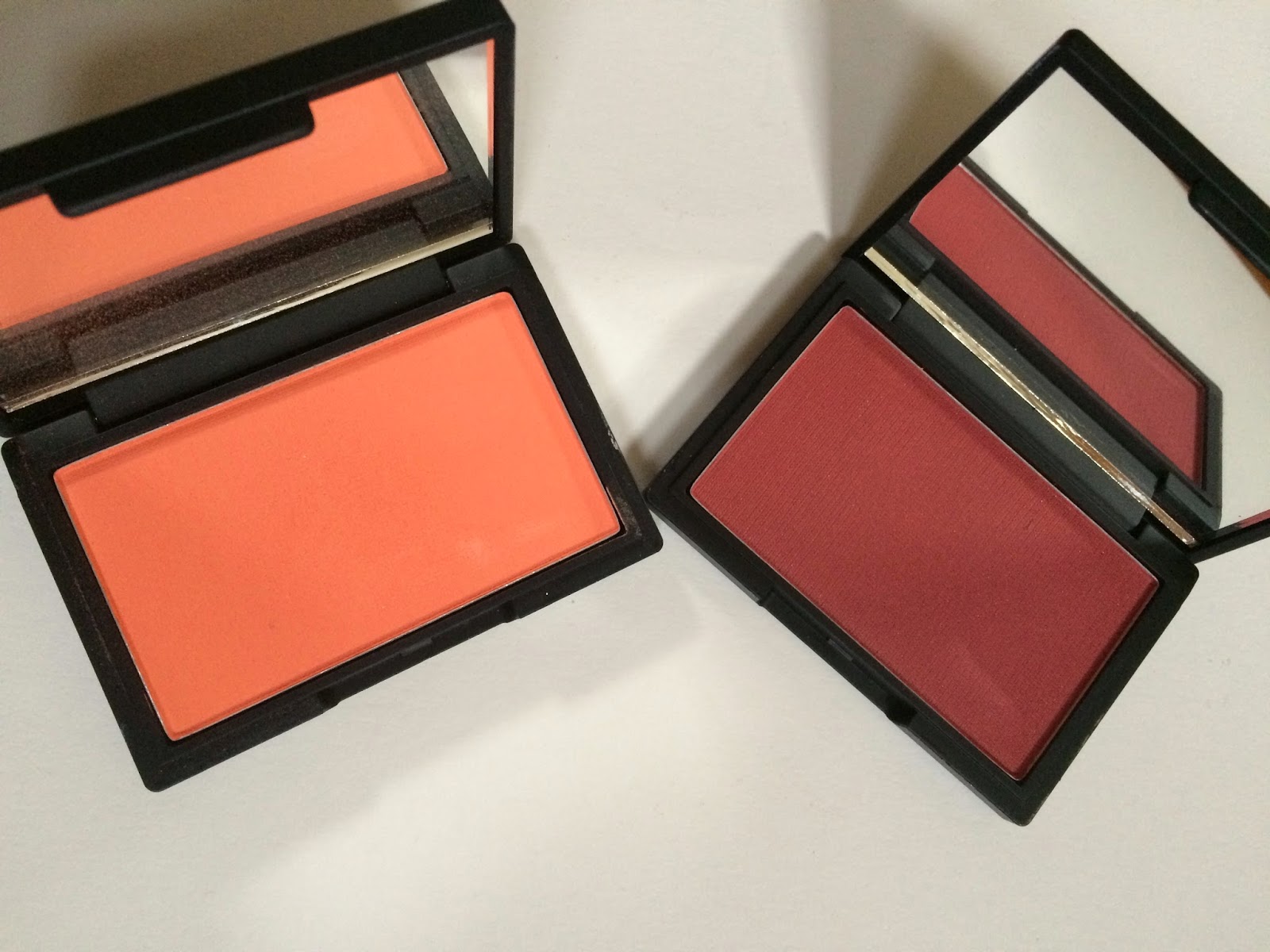 2014 was indubitably my Year of Blush. I began the year with just two blushes, both cool pinks from NARS, and ended it with seven (!), from five different brands. These two blushes from the British drugstore brand Sleek are every bit as pigmented as my prized NARS blushes, and almost as finely milled. Life's a Peach (left) is a matte soft orange that looks pinker when applied; I like using it to warm up my complexion when I'm wearing a warm-toned lipstick. Flushed is a red-plum that I've been wearing almost every other day this fall and winter. It has a tiny smattering of sparkle, just visible in the pan but undetectable on my cheeks. 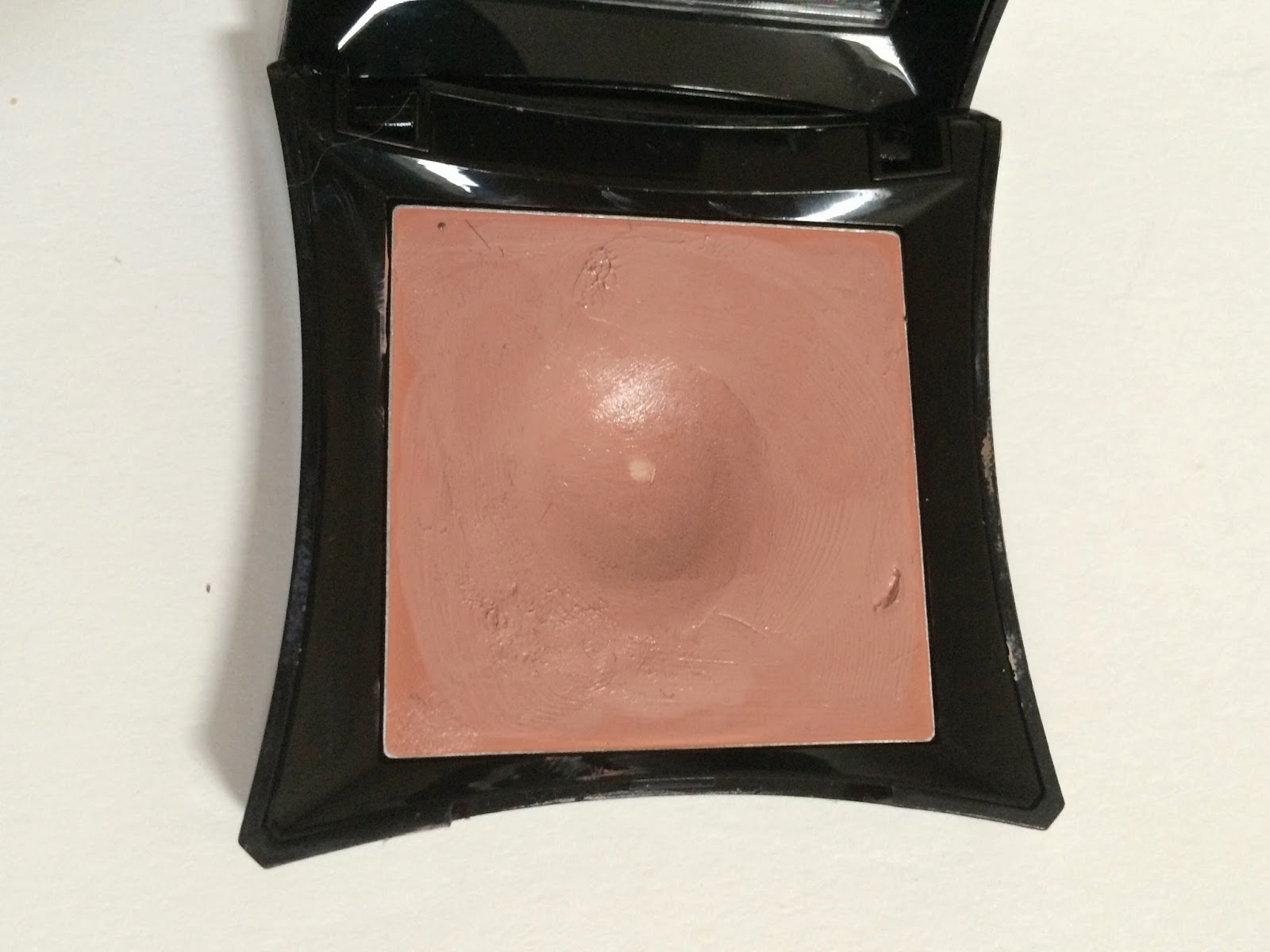 Another British blush! This one was a formidable £21.50 at Selfridges, but I've never once regretted the expense. Zygomatic is a subtle nude-pink in a lightweight, eminently blendable formula. It's the blush I rely on when I'm wearing a bold lipstick and want just a hint of color in my cheeks. I do have to apply more of it than I do of my other blushes, as you can see from that glint of pan (after just six months!), but that's the only drawback I can think of. 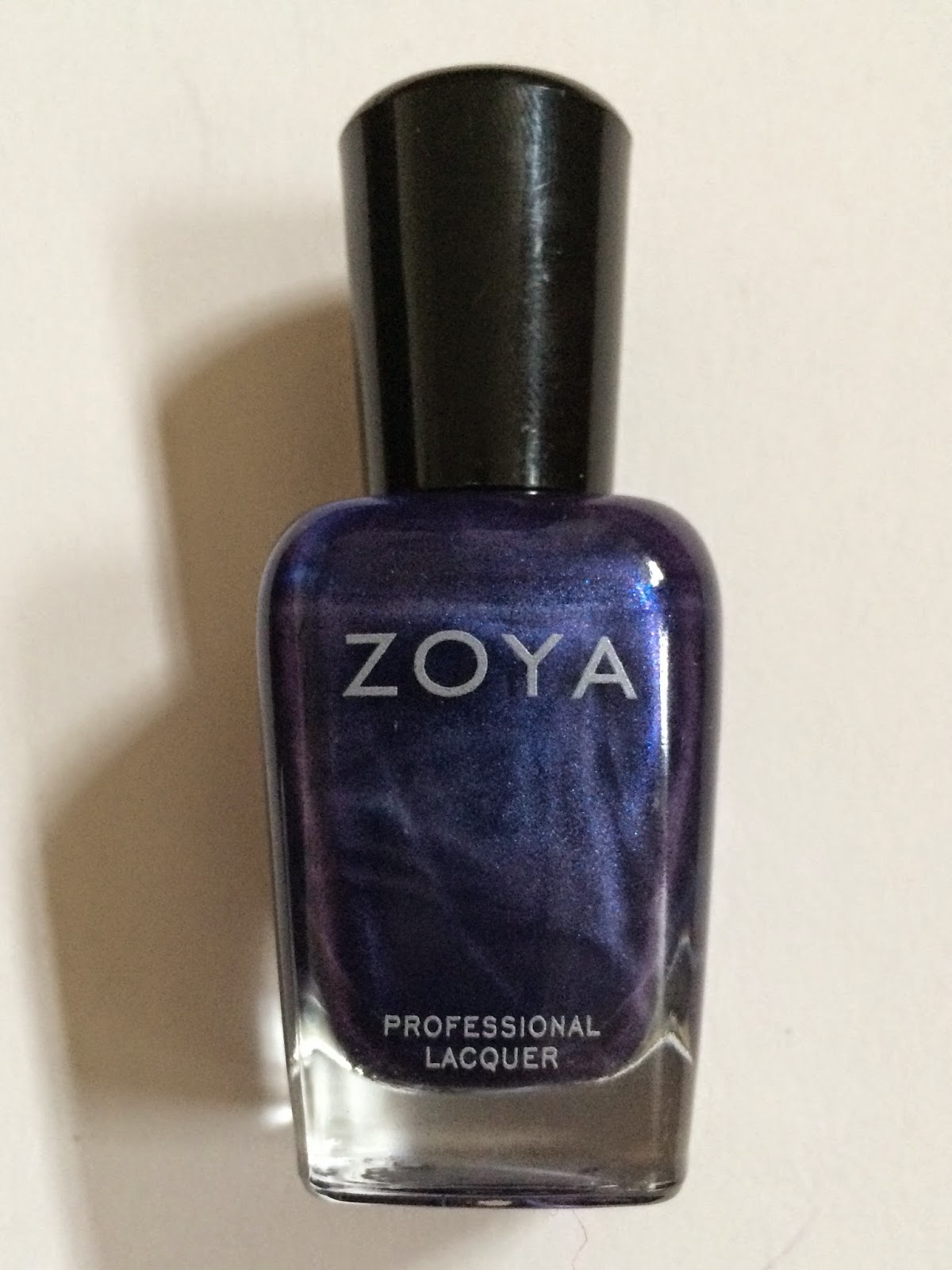 I never reviewed the three nail polishes I ordered from Zoya back in July, which is a shame, because I ended up loving them all. Zara is a lavender with gold fairy microshimmer, photographed here; Yara is a gold-flecked olive green; and Neve, my favorite of the three, is a navy blue with shimmer so fine that it creates a glowing metallic finish. Zoya became one of my two favorite polish brands this year (the other being OPI). I've bought six of their polishes in the last year or two, and haven't been disappointed in any of them. Plus, they're cruelty-free. 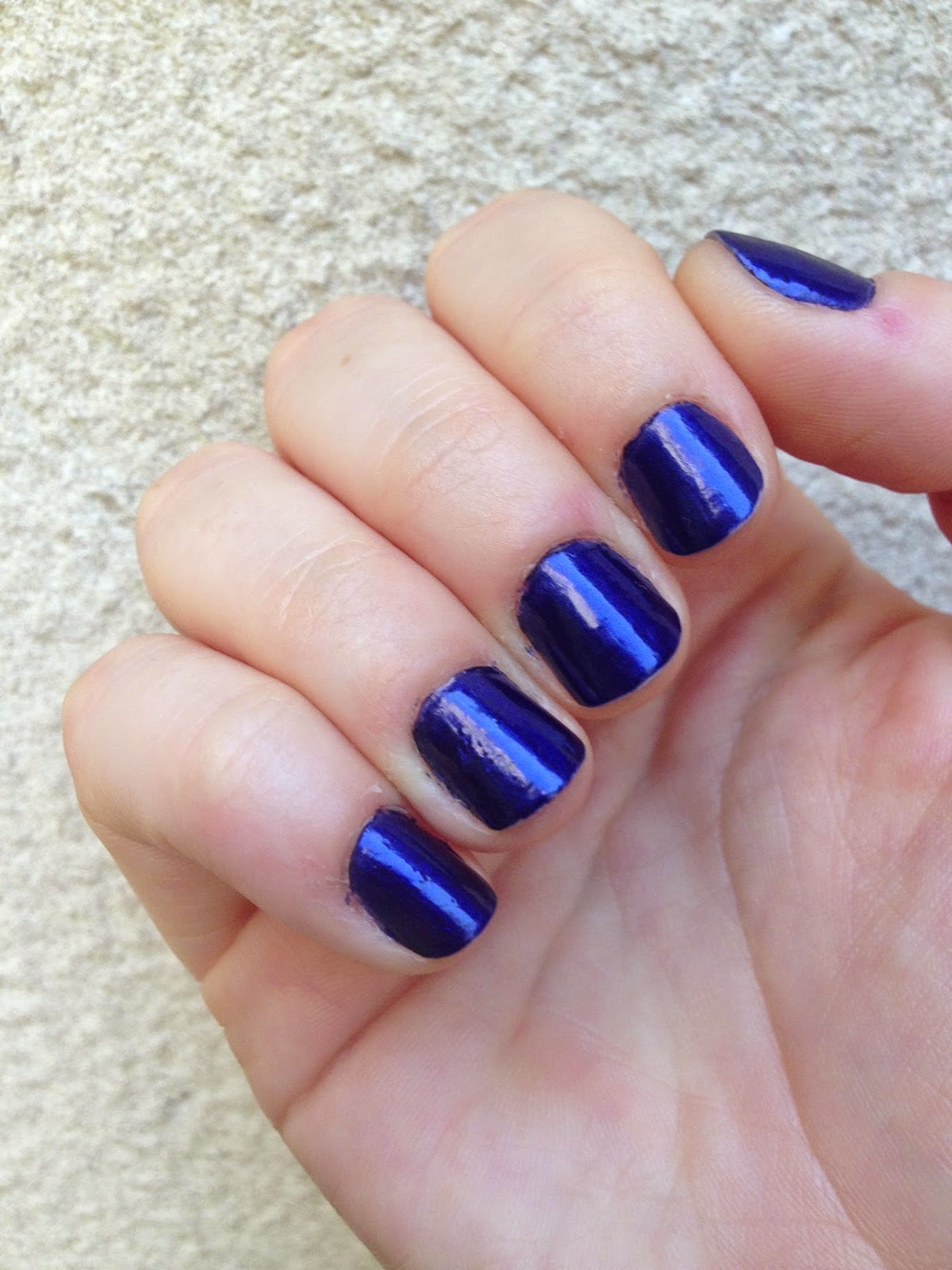 (By an odd coincidence, my favorite polish of 2013, OPI Eurso Euro, was also blue.) 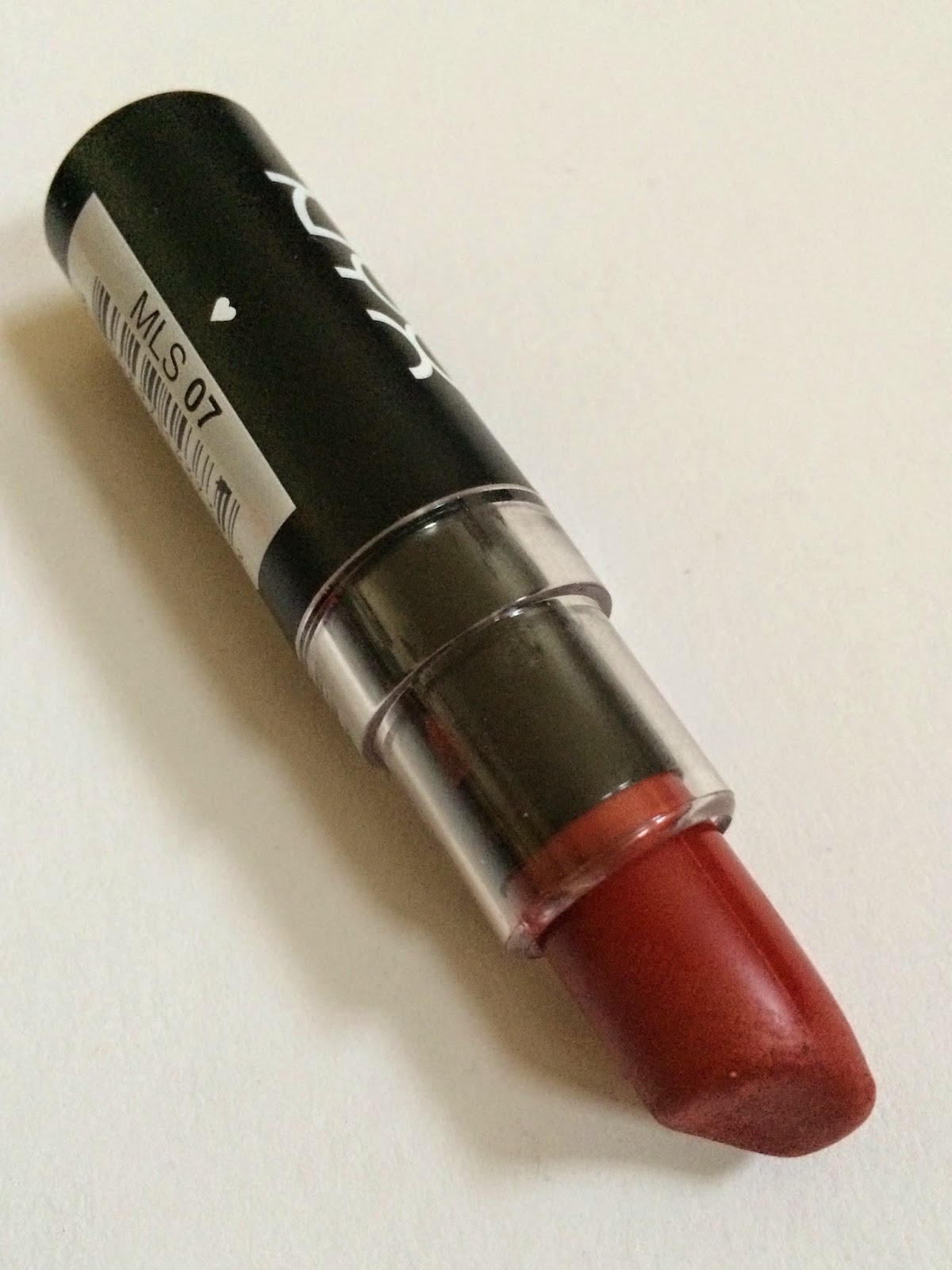 Here's a good example of an imperfect product that still made it onto my best-of-2014 list; it even beat out Rimmel Apocalips Lip Lacquer in Across the Universe, a similarly colored lipstick in a superior formula. It turns out that I just don't like liquid lipsticks very much: they're fussier than traditional bullets, especially when they're as saturated as Across the Universe. Alabama is a more toned-down brick red than ATU, which makes it more versatile. And though I wish it felt less dry on my lips and didn't tug during application, I can't resent the lipstick that taught me how to use a lip brush. Plus, I bought it in the state of Alabama, which is just too perfect. 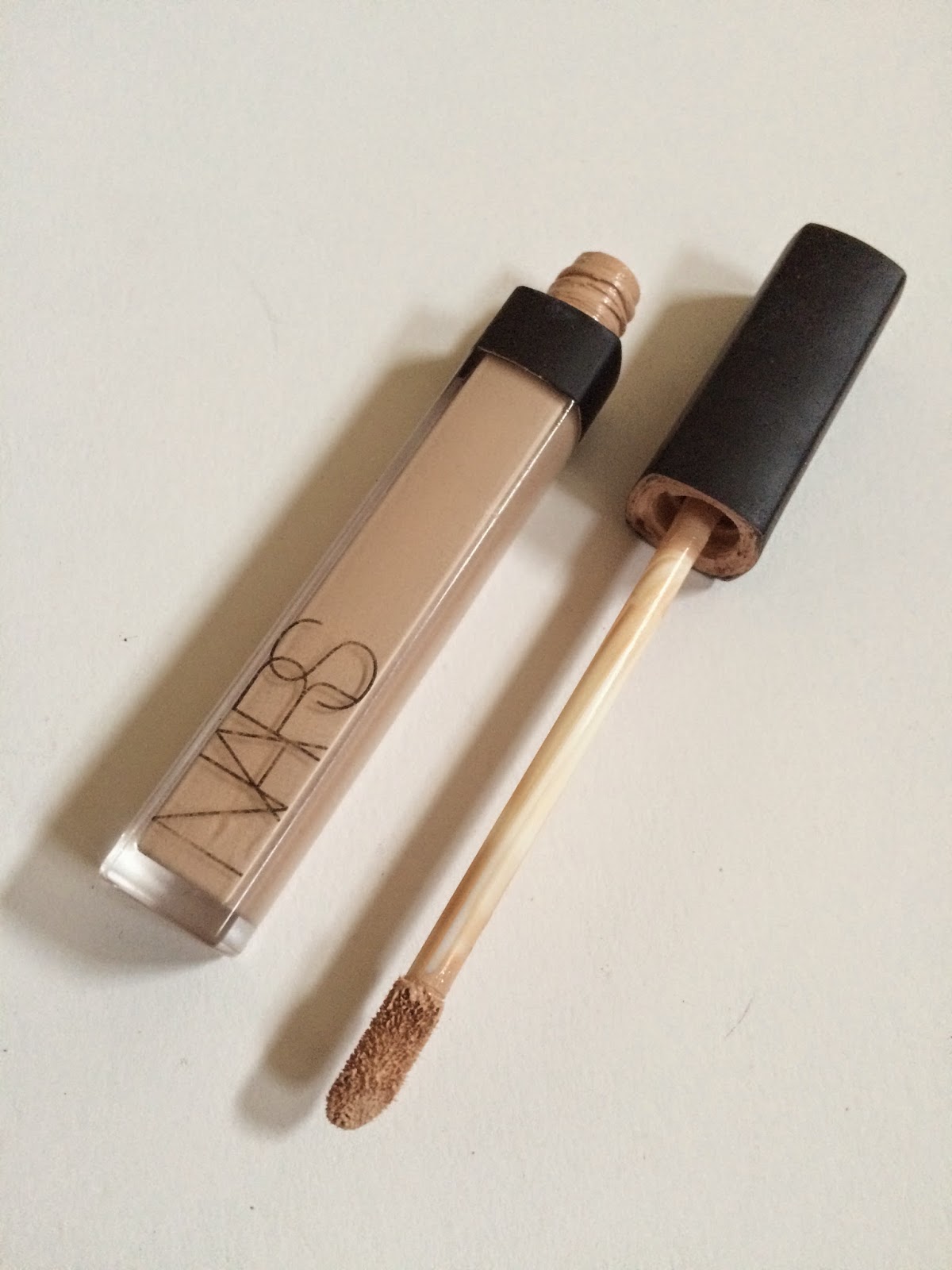 It finally happened: I found a concealer capable of reducing, if not hiding entirely, the dark circles I've had since early childhood. Vanilla is too dark for the rest of my face, so I've kept my old reliable CoverGirl for spot concealing, but I use the NARS under my eyes almost every day. It's opaque without being cakey; it blends well, but stays put once blended. 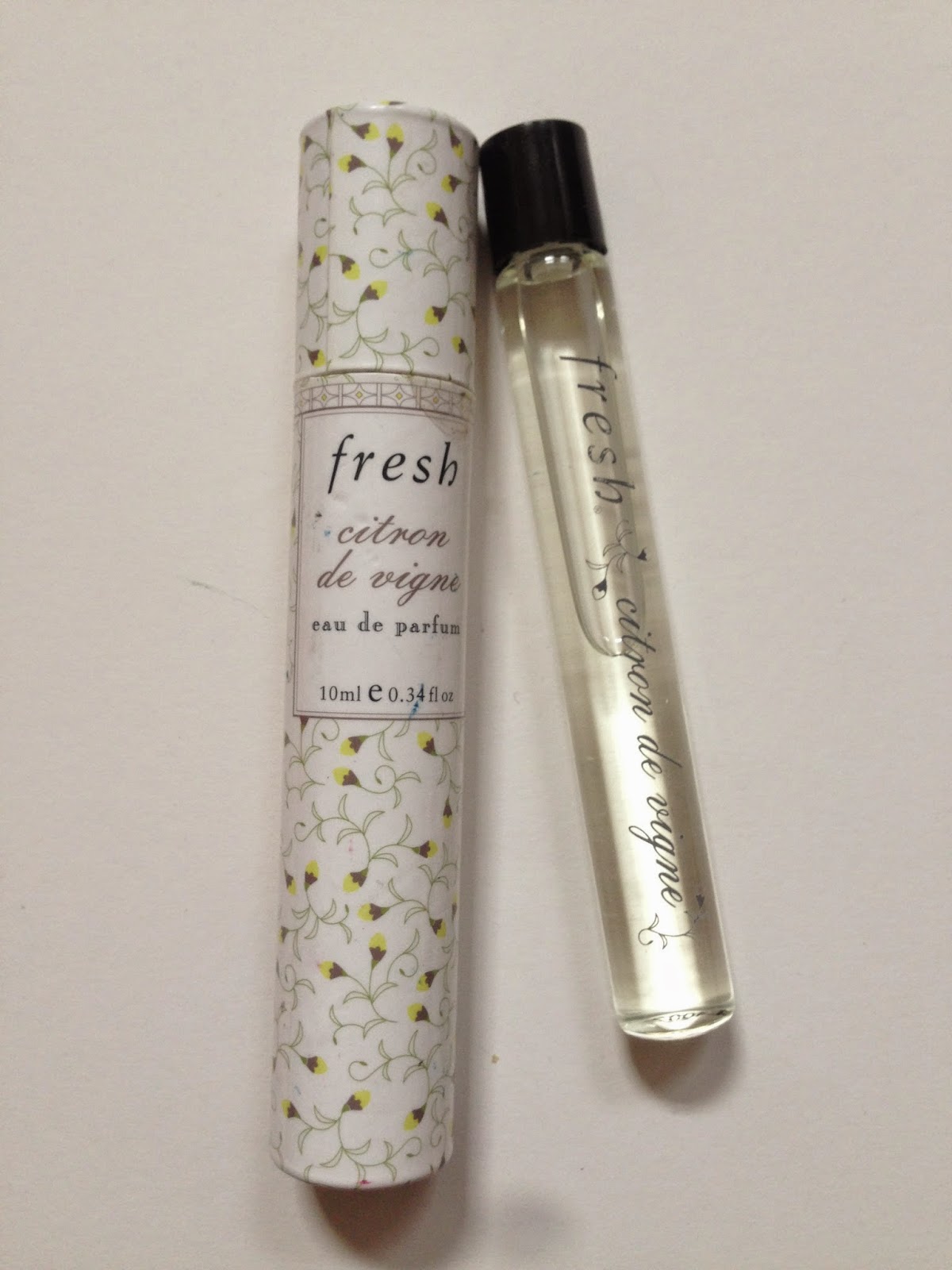 I bought this perfume in August, a few days before I drove from San Francisco to Los Angeles with my boyfriend. I'd coveted Citron de Vigne for at least a year before that, dabbing it on my wrists every time I entered a Sephora, but I think I'll always associate the scent with August of 2014: with the vineyard we visited outside Santa Barbara, and with our few days in surreal, dazzling LA. It's fitting that Citron de Vigne is linked to a particularly boozy episode of my year, since Fresh describes the fragrance as "a sparkling citrus scent inspired by France’s Champagne region." I'm a novice at writing perfume reviews, but if I were to choose one word to characterize Citron de Vigne, it would be "clear." It's fruity but not quite sweet; it feels breezy, modern, and nonchalant. I wish the scent lasted longer on my skin, but I think its ephemerality is part of its charm. And how cute and travel-friendly is that sturdy cardboard tube? 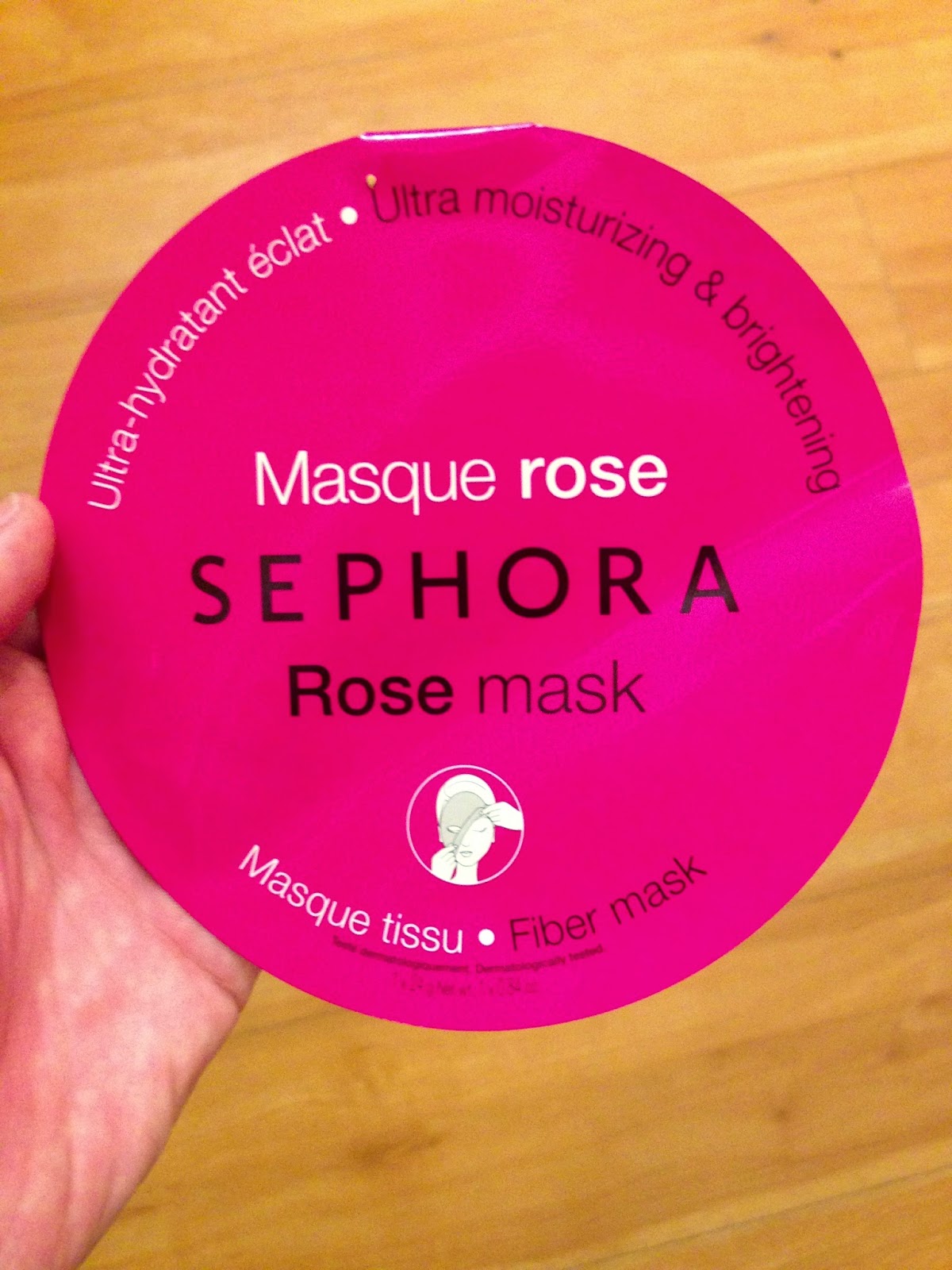 This mask, which I applied in a motel room in San Luis Obispo after a dusty day of driving (or, in my case, sitting: I can't drive), introduced me to the wondrous world of sheet masks. It revived and smoothed my parched skin, not just for that evening but for the entire next day. In the four months since my epiphany, I've become a sheet-mask evangelist, pushing masks on my mother and boyfriend. I've tried a few other masks since August, but Sephora's rose mask is still my favorite, despite its relatively high price ($6, compared to $3-ish for Tony Moly and Skinfood).

12. Topshop Matte Lip Bullet in Get Me Bodied 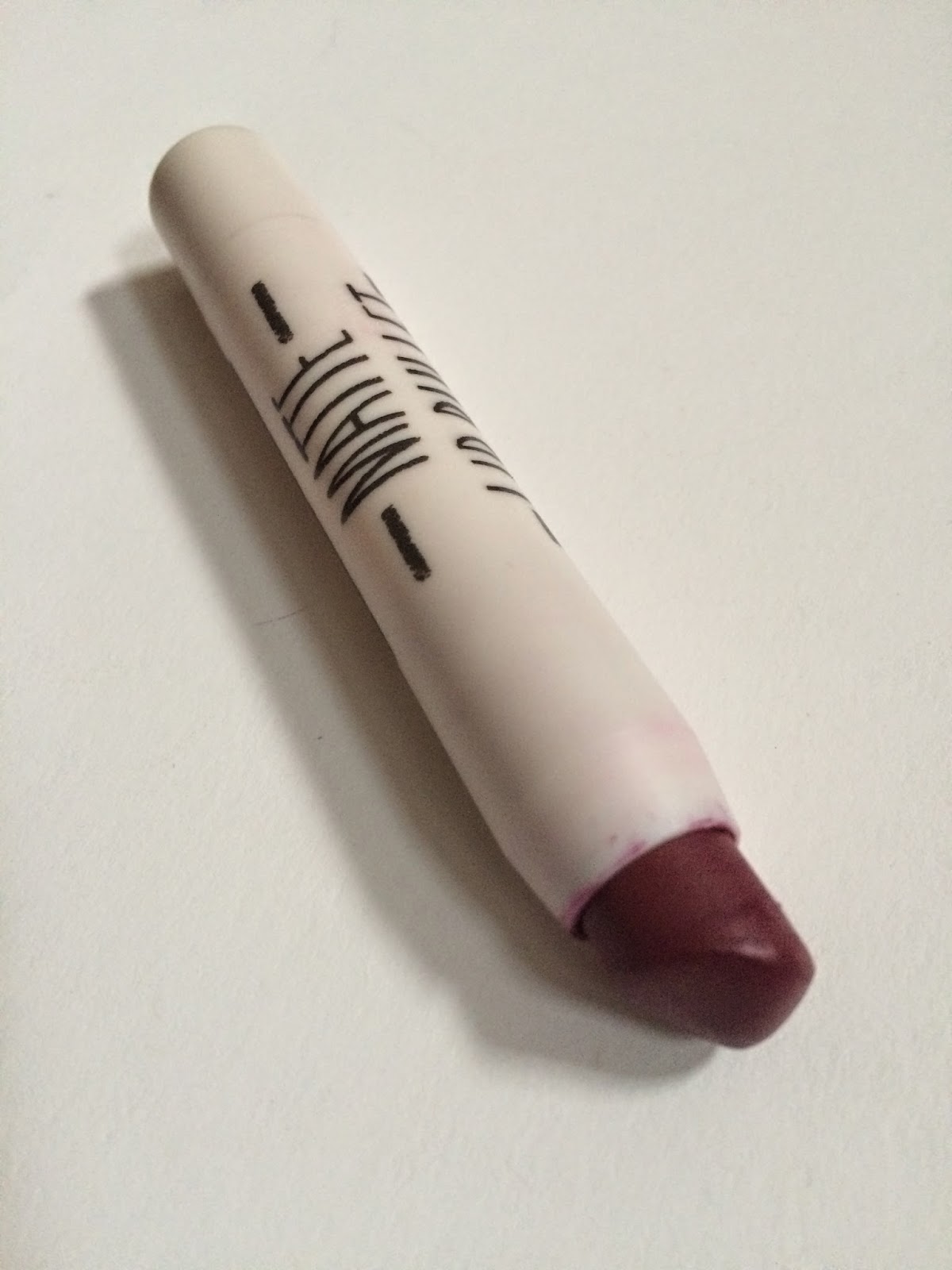 I know I said earlier that I couldn't choose a favorite from these 14 products, but this deep plum lipstick might be my favorite. It's the most unproblematic matte I've ever tried, it lasts a long time and fades evenly, and its color is autumn distilled. Dark red in some lights, magenta-purple in others, beautiful in all. I've received more compliments on Get Me Bodied in the last few months than I have on any other lipstick ever. I just wish it looked more attractive in the tube: it has to be one of my least photogenic beauty products. It's almost impossible to prevent the lipstick from smearing onto the white packaging--I did a quick cleanup job before taking this photo. 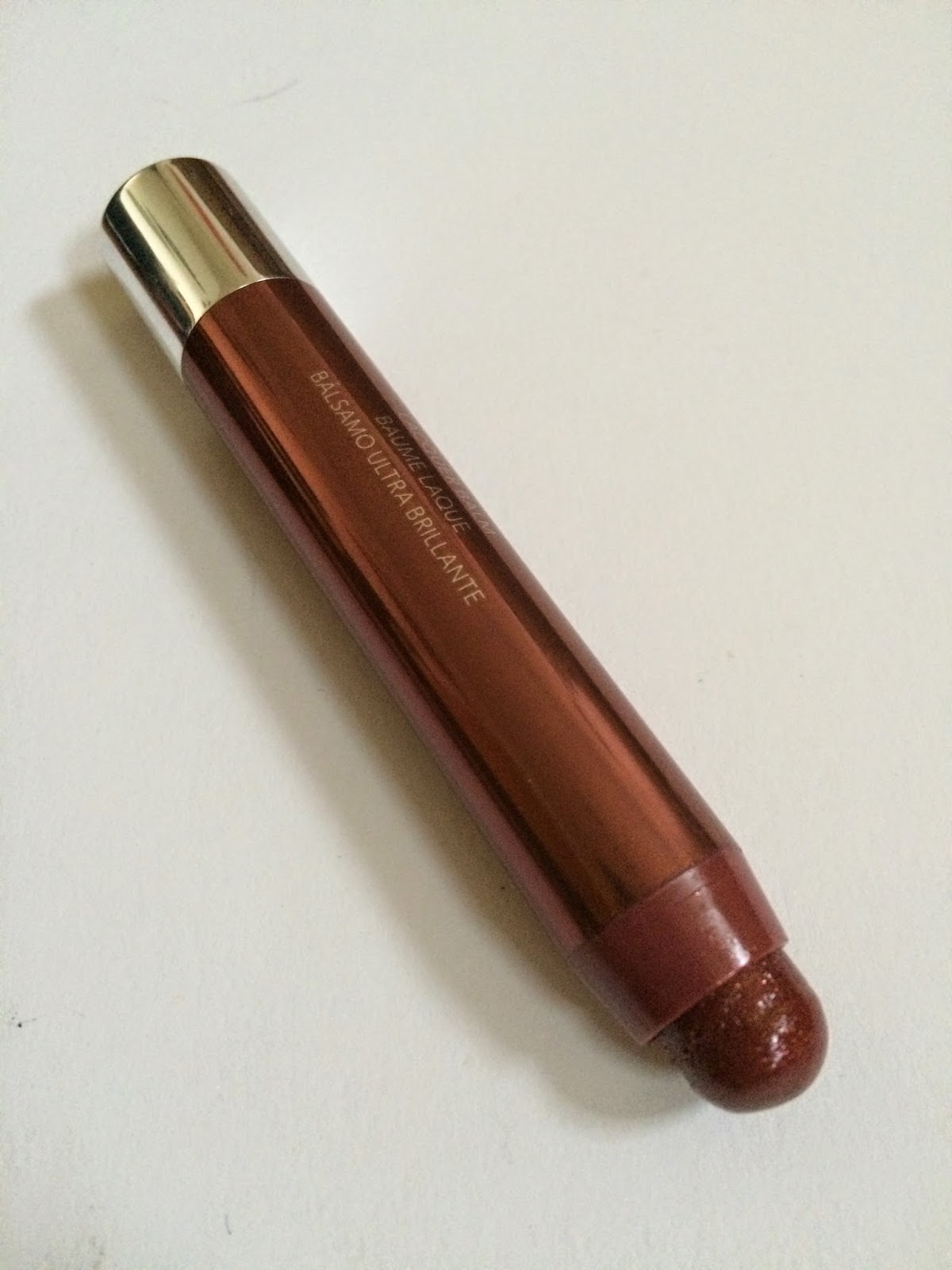 There's a brown lipstick for everyone, and Coy is mine. The Lacquer Balm formula doesn't last as long as I'd like, and it's less kind to dry lips than a product with "balm" in the name should be, but this sparkly plummy brown just makes me happy. Coy has multiple qualities that I used to find distasteful in lipsticks: it's a chubby crayon (strike one) in an unambiguously brown color (strike two) with shimmer (strike three). Look at me, conquering my prejudices in order to buy more lipstick! How praiseworthy. Plus, as I noted recently, Coy is the closest match I have for Marsala, Pantone's color of the year. 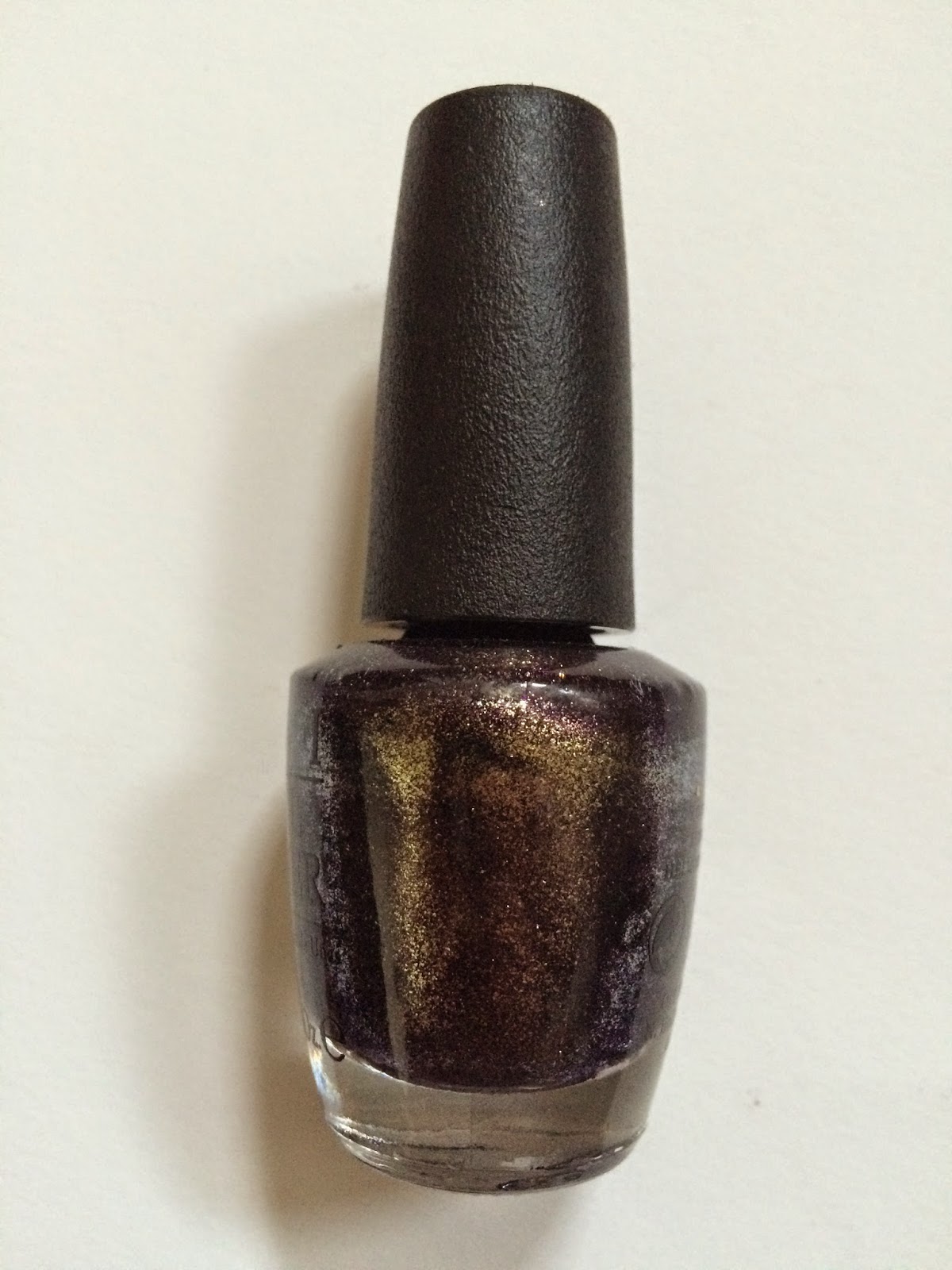 Are first-class desires not middle-class desires by definition? Probably, but that doesn't stop me from loving this nail polish from OPI's Holiday 2014 collection. Dark eggplant with a vein of gold shimmer, like the gold that dances in the dreams of every bourgeois philistine. Slavoj Žižek could base an entire three-hour lecture on the name of this polish. I've seen him base three-hour lectures on less.

Finally, a grab bag of looks featuring some of the above in different combinations:

Habanera (mint side, layered over NARS Lhasa), Life's a Peach, and Vibrant Mandarin: 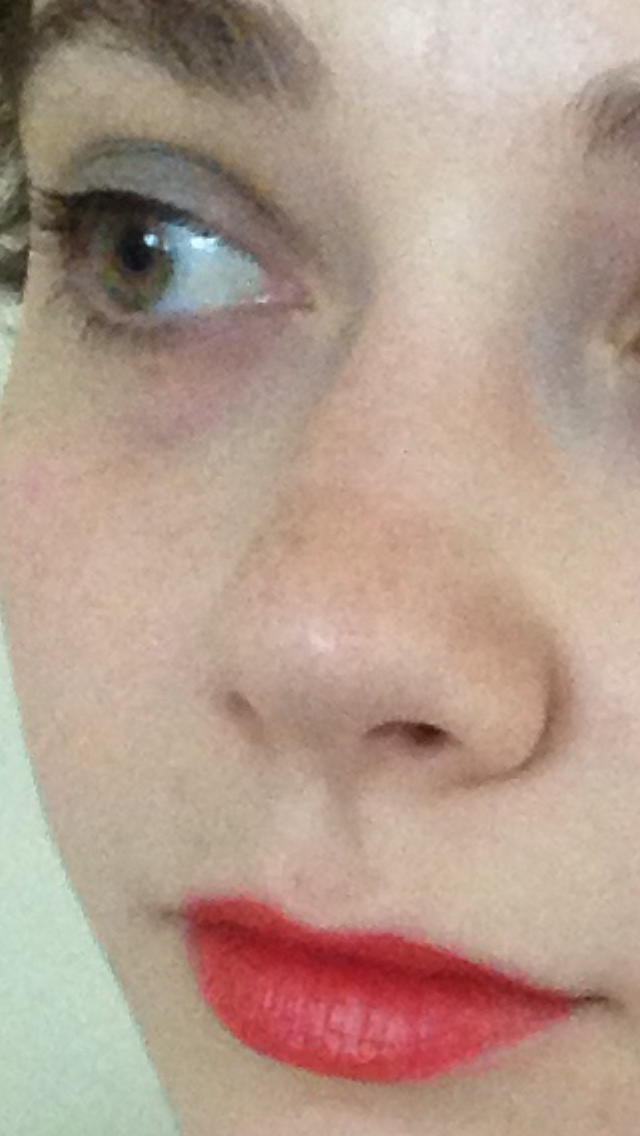 Habanera (plum side, plus Maybelline Bad to the Bronze [?]), Flushed, and Sultry: 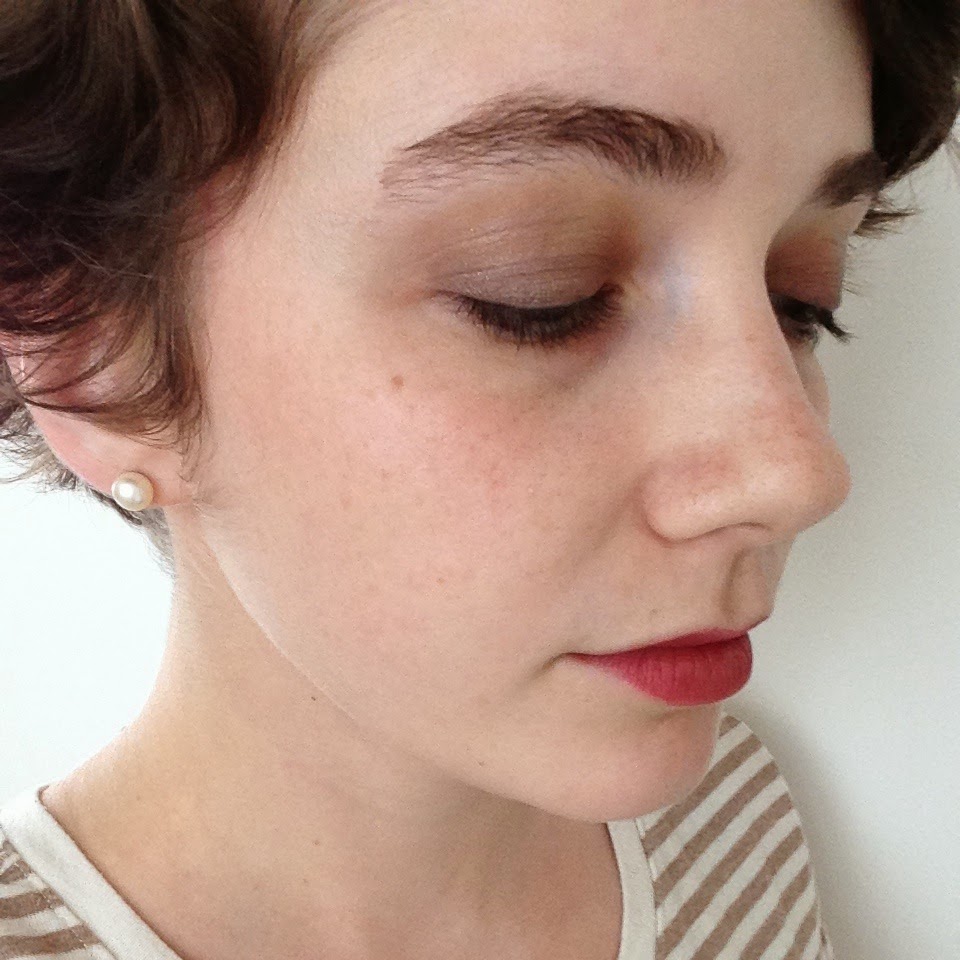 Habanera (both sides), Zygomatic, and Coy: 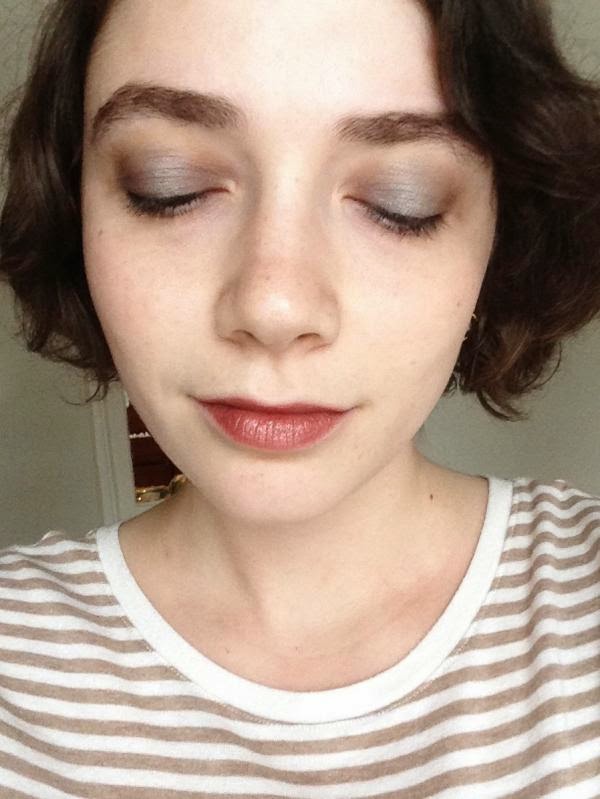 Habanera (plum side, with NYX Iced Mocha), Flushed, and Get Me Bodied: 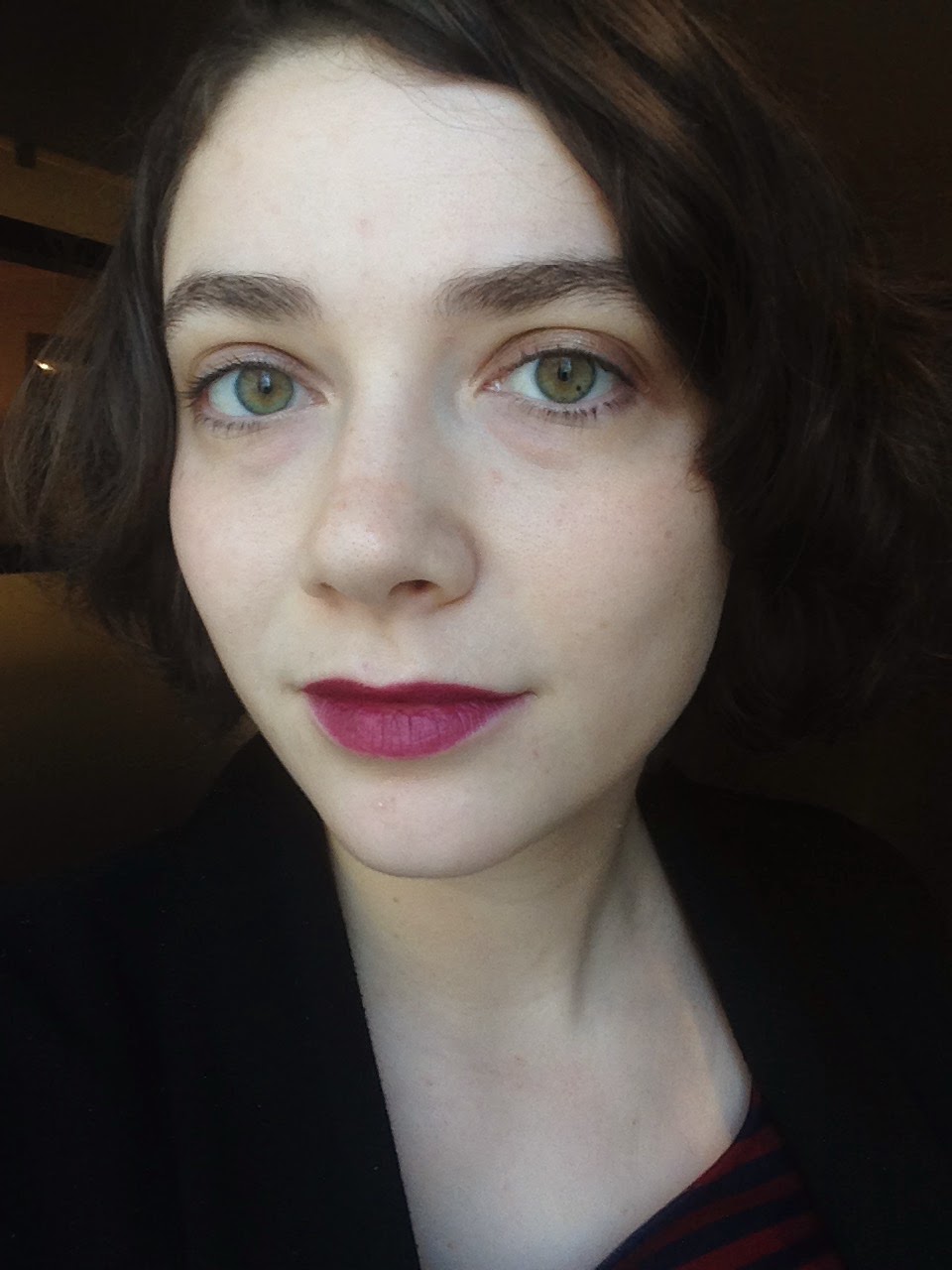