I've used up quite a few products, mostly skincare, in the last month or two, so I thought I'd take the opportunity to write my first empties post. I've been wondering why so many people (myself included) love such posts. Maybe because it's the closest the law-abiding among us will ever come to the thrill of rifling through someone else's household trash. Maybe because it gives us all hope that we, too, will someday have the excuse to buy a bunch of new things. In the world of beauty addiction, the optimist's glass (or tube, or pan, or jar) is always half empty. I wanted to delay this post until I'd used up Revlon Plum Velour, so that I could have an exciting empty tube of lipstick, but the empty containers of everything else kept piling up... 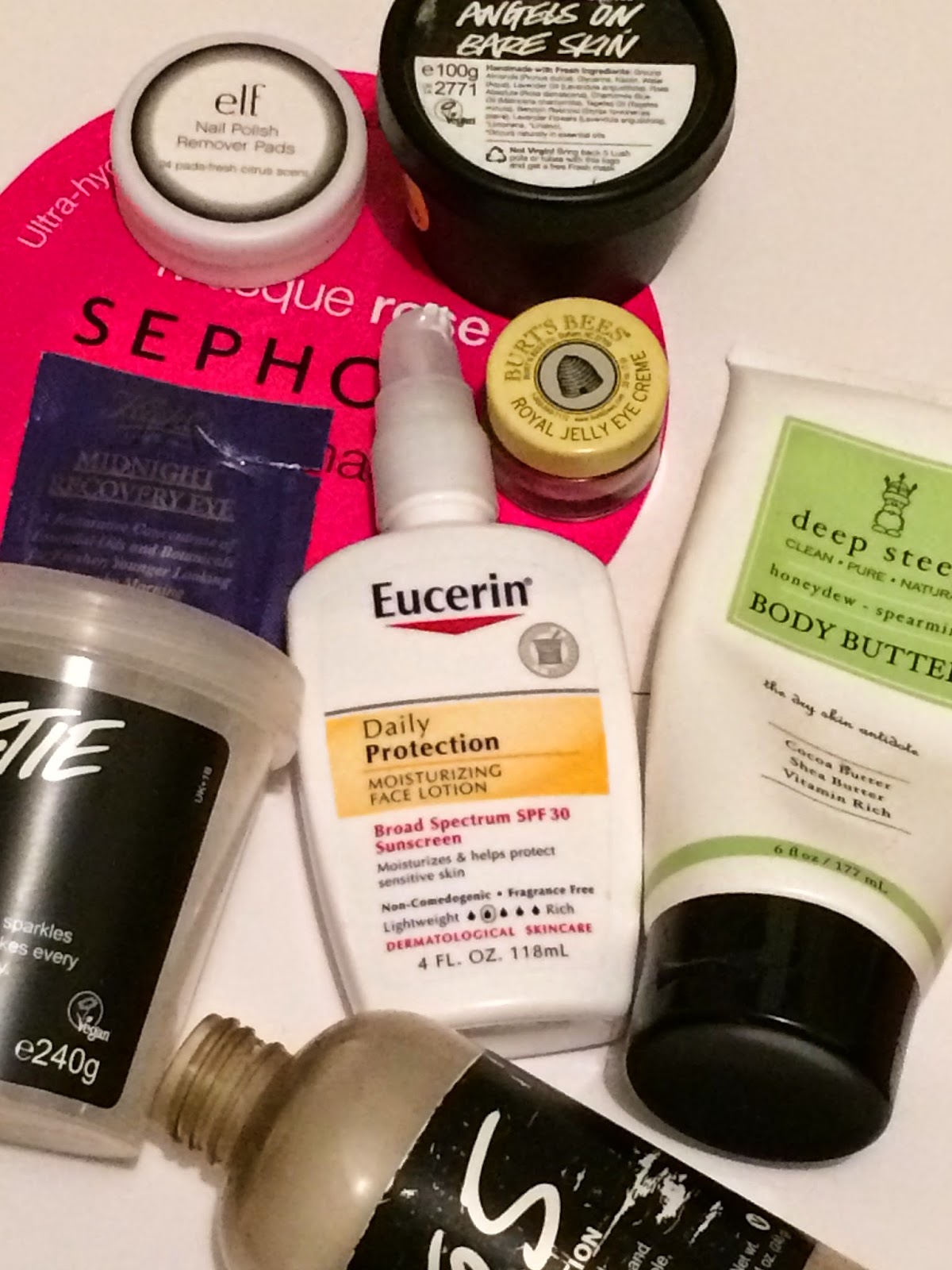 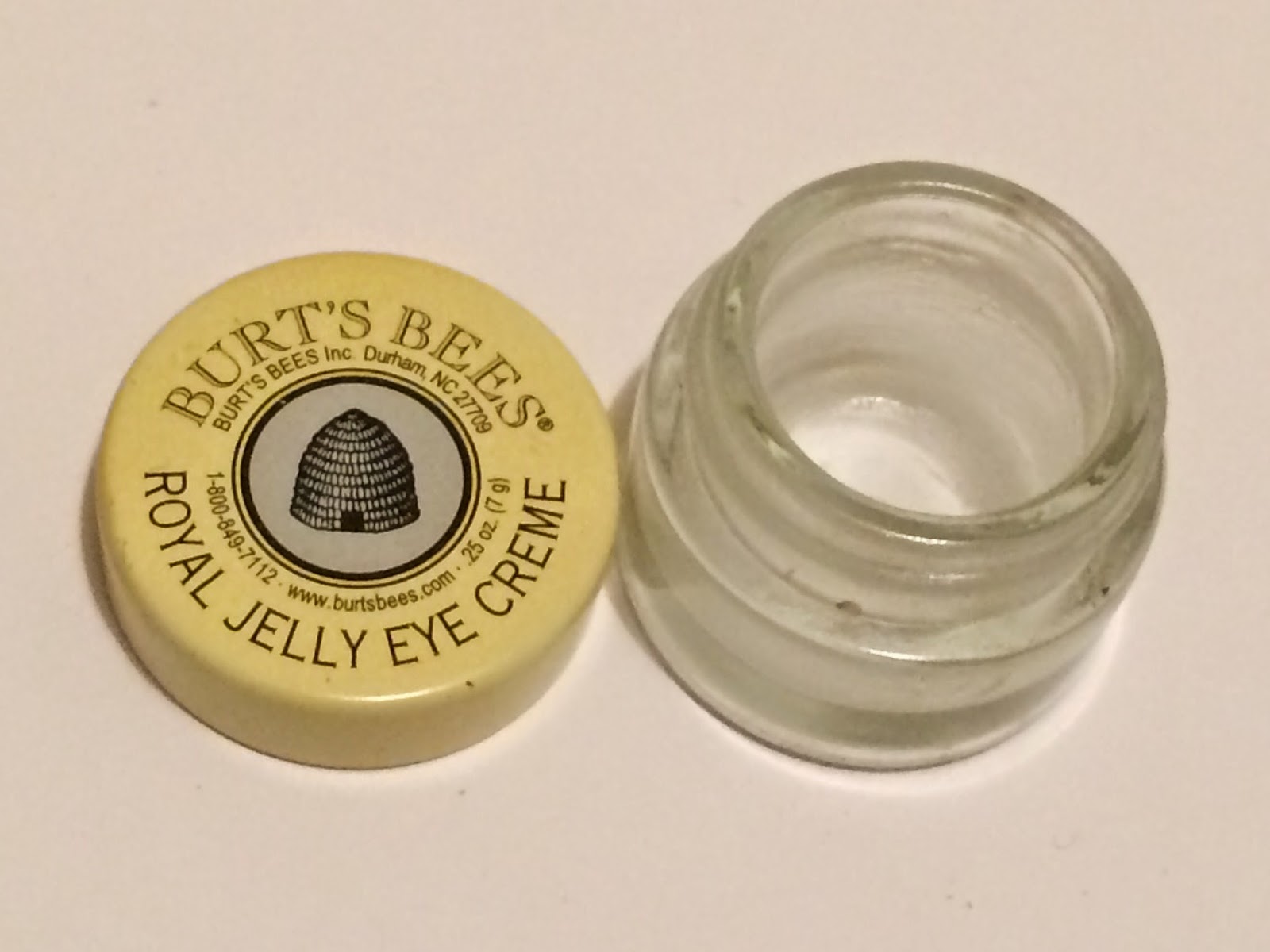 Eye cream is the Pascal's Wager of cosmetics. I suspect that most eye creams are placebos, but what if they're not? Once you start using eye cream, there's no way to tell what you'd look like if you hadn't started, so you might as well keep going. I like this one because it's $15 and it smells like honey and cucumber. At the very least, it's delivering some extra moisture to my eye area, which can't be a bad thing. 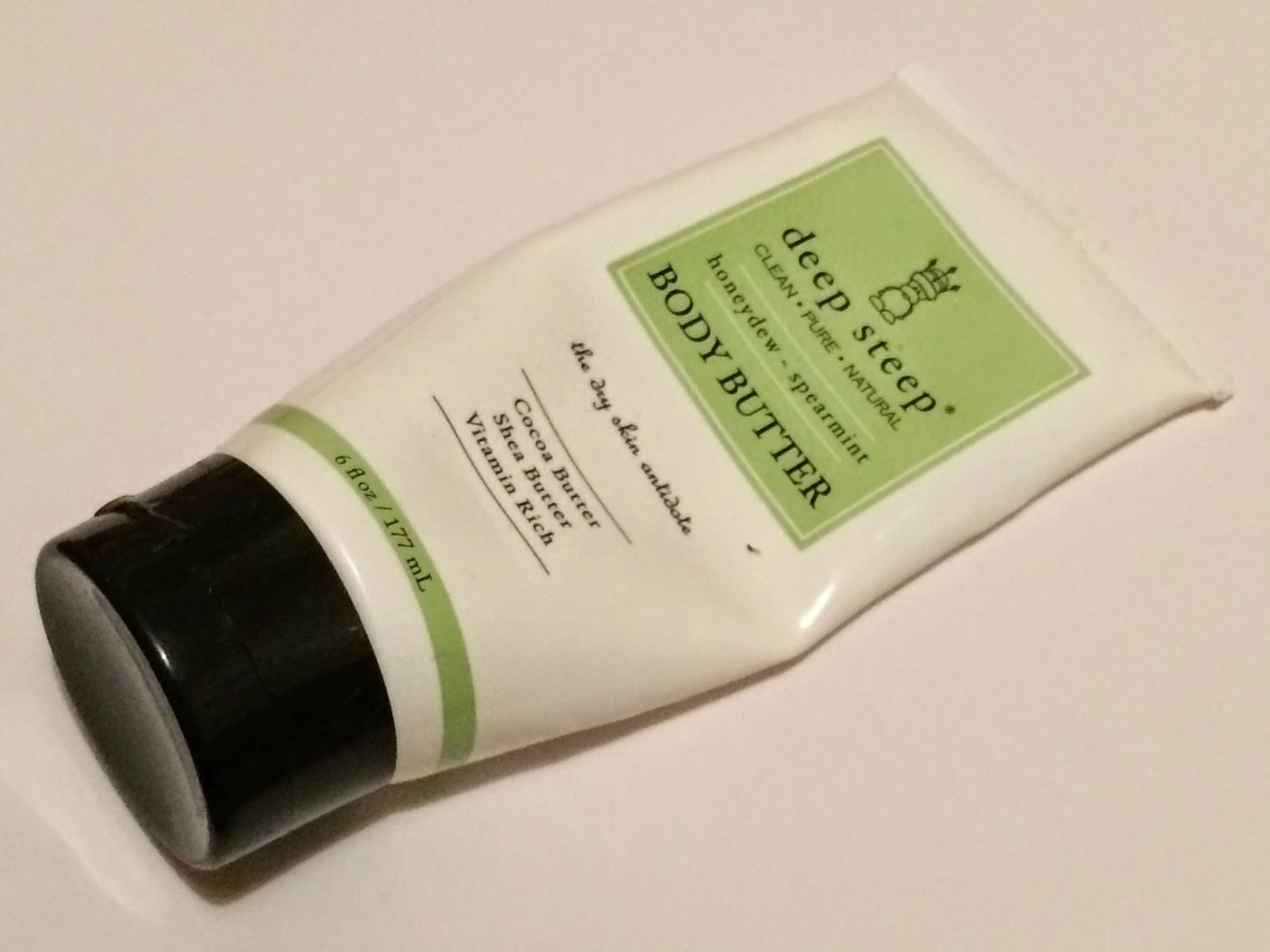 This lotion was a Christmas gift from my boyfriend's mother last year. I'd never heard of the South Carolina-based brand, but I was very impressed with the body butter, which smelled like a summer cocktail: minty and fruity, but not at all artificial (no flashbacks to middle-school Bath & Body Works visits). The formula was thick but not greasy, and unlike other scented lotions, it didn't irritate my sensitive leg skin. Plus, the company is cruelty-free. An all-around win. 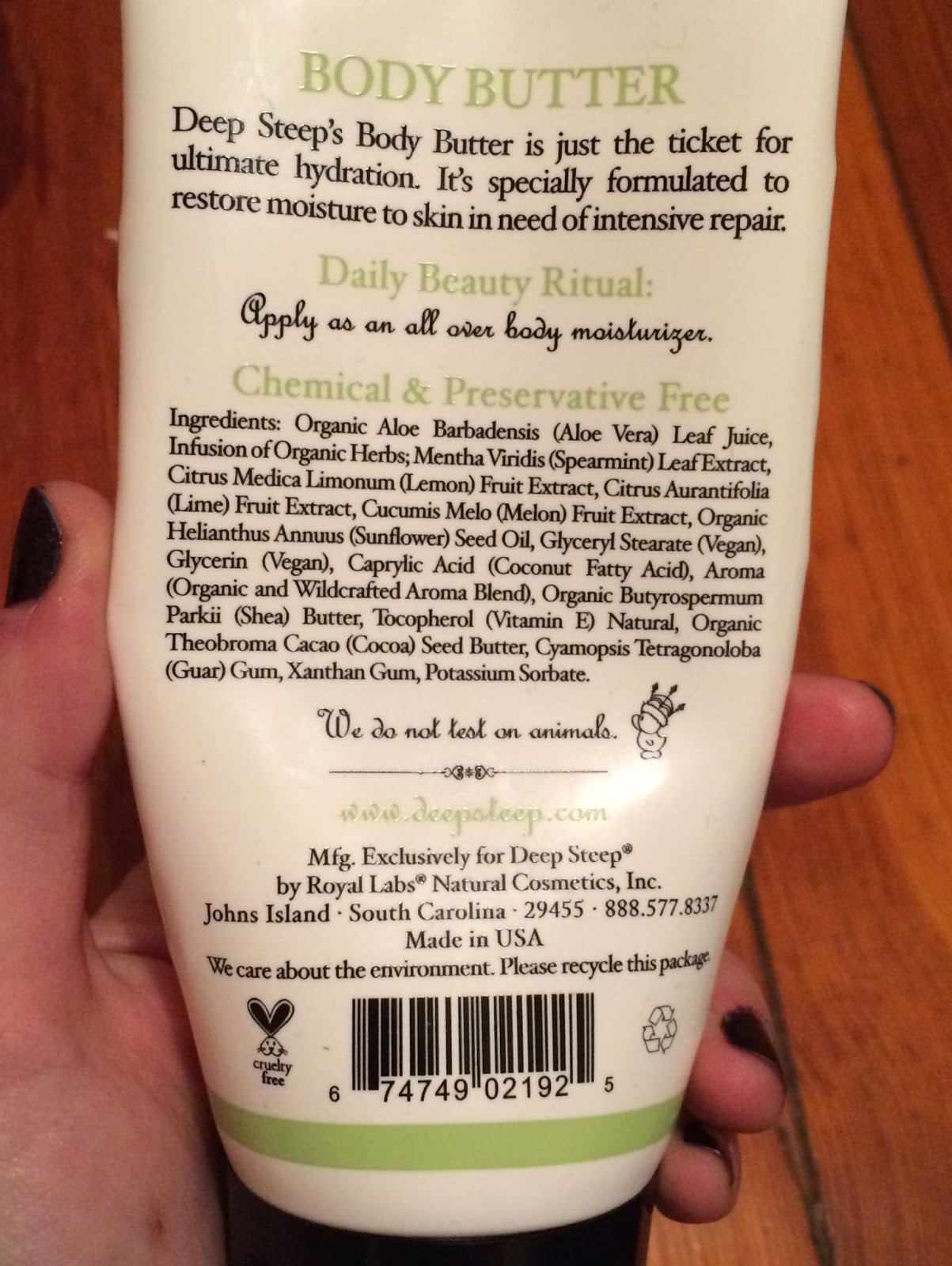 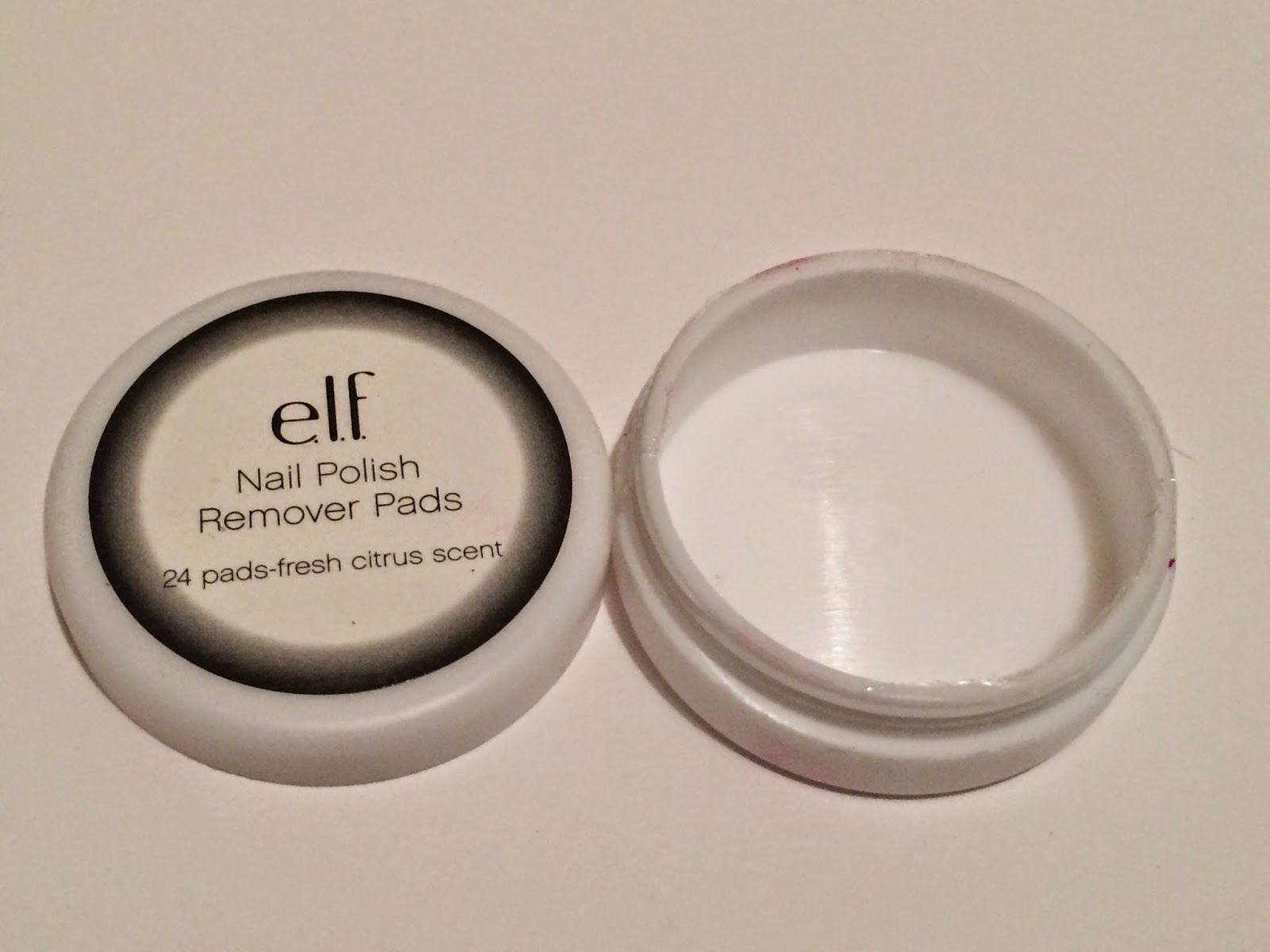 My mother picked these up at Target and included them in the little birthday package she sent me this year. Not much to say about these: they're convenient, they do exactly what they promise to do, and they smell like orange and grapefruit. They also leave my nails feeling more hydrated than they do after I use regular polish remover.

This is my daily SPF moisturizer. It's fairly lightweight, its conventional sunscreen smell isn't too strong, and it doesn't make me break out. Not a game-changing product, but I'll probably repurchase it mindlessly until I can afford something fancier. 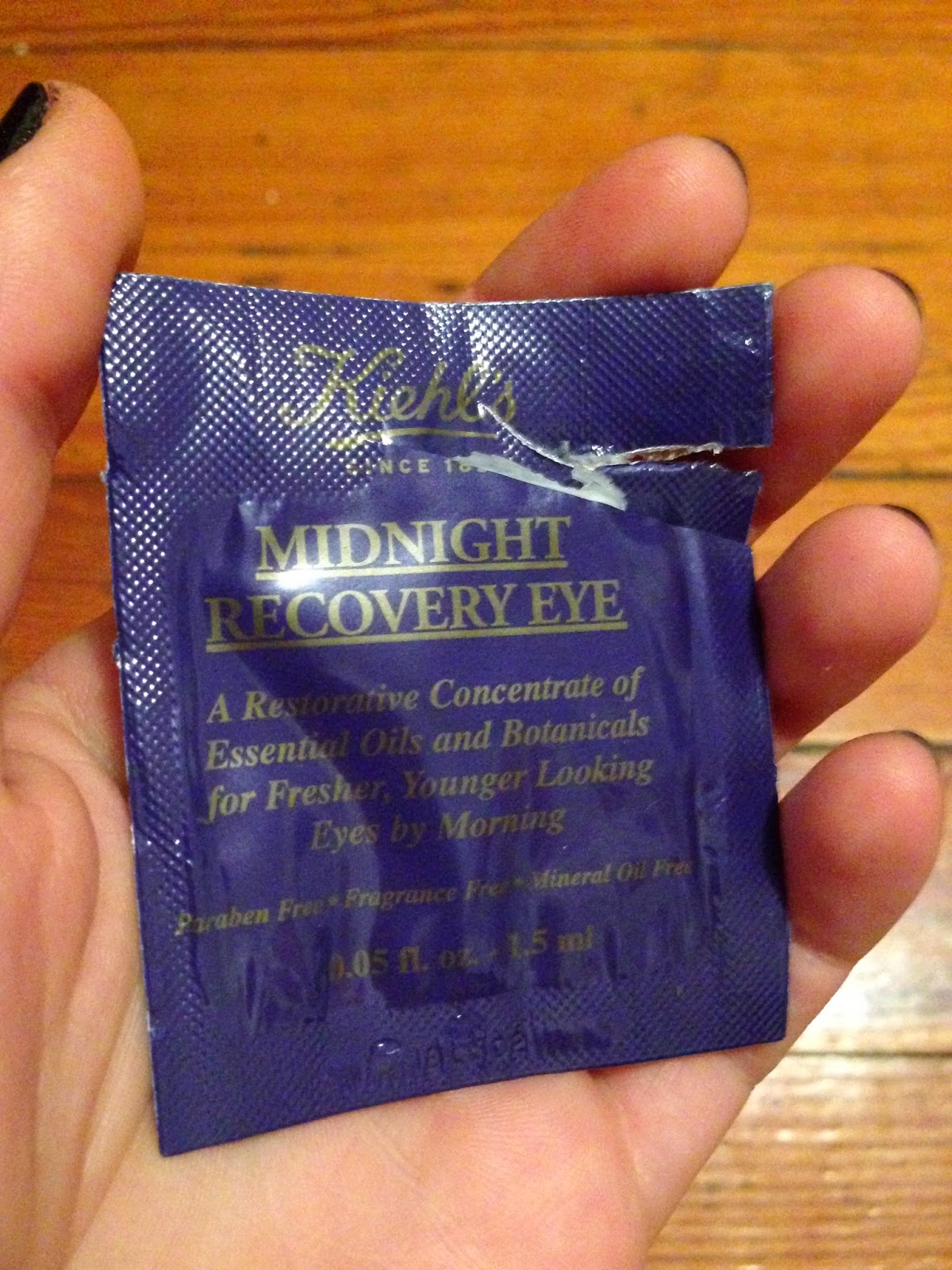 I'm cheating here, because I haven't quite finished using this cult-favorite eye cream, a sample that came with a Nordstrom order. (I also got some YSL Touche Eclat samples, which I'm eager to try.) The package, which bears an unfortunate likeness to a condom wrapper, promises "fresher, younger looking eyes by morning." I've used it for two nights now, and it does seem more effective than my Burt's Bees, but it also stings slightly and makes my eyes water when I pat it onto my orbital bone. That can't be good. I don't plan to buy the full-sized version, but it does make me wonder if some eye creams out there aren't placebos. 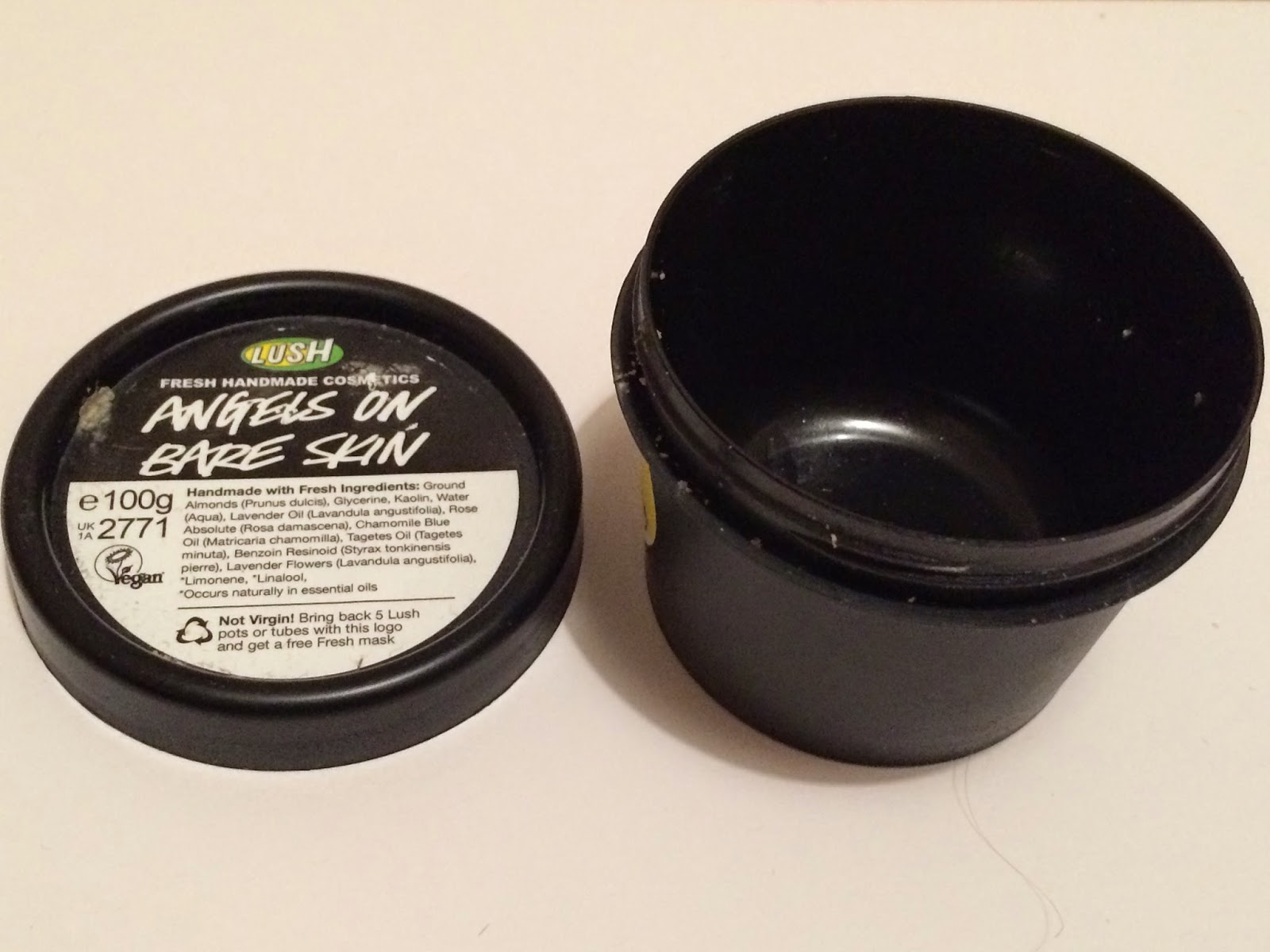 I reviewed this lavender-scented, clay-and-almond-based exfoliating cleanser in my skincare post back in April. This is the second pot I've finished, and my opinion on it still stands: it's messy and slightly drying (I never use it more than twice a week), but effective. I haven't repurchased it though, because its shelf life is so short: only two months, according to the label. I confess I used it for another month or two after the expiration date, because it looked and smelled just as it had when new, but I didn't feel great about doing so. I'd like to find another gentle exfoliating cleanser, so let me know if you have any suggestions! 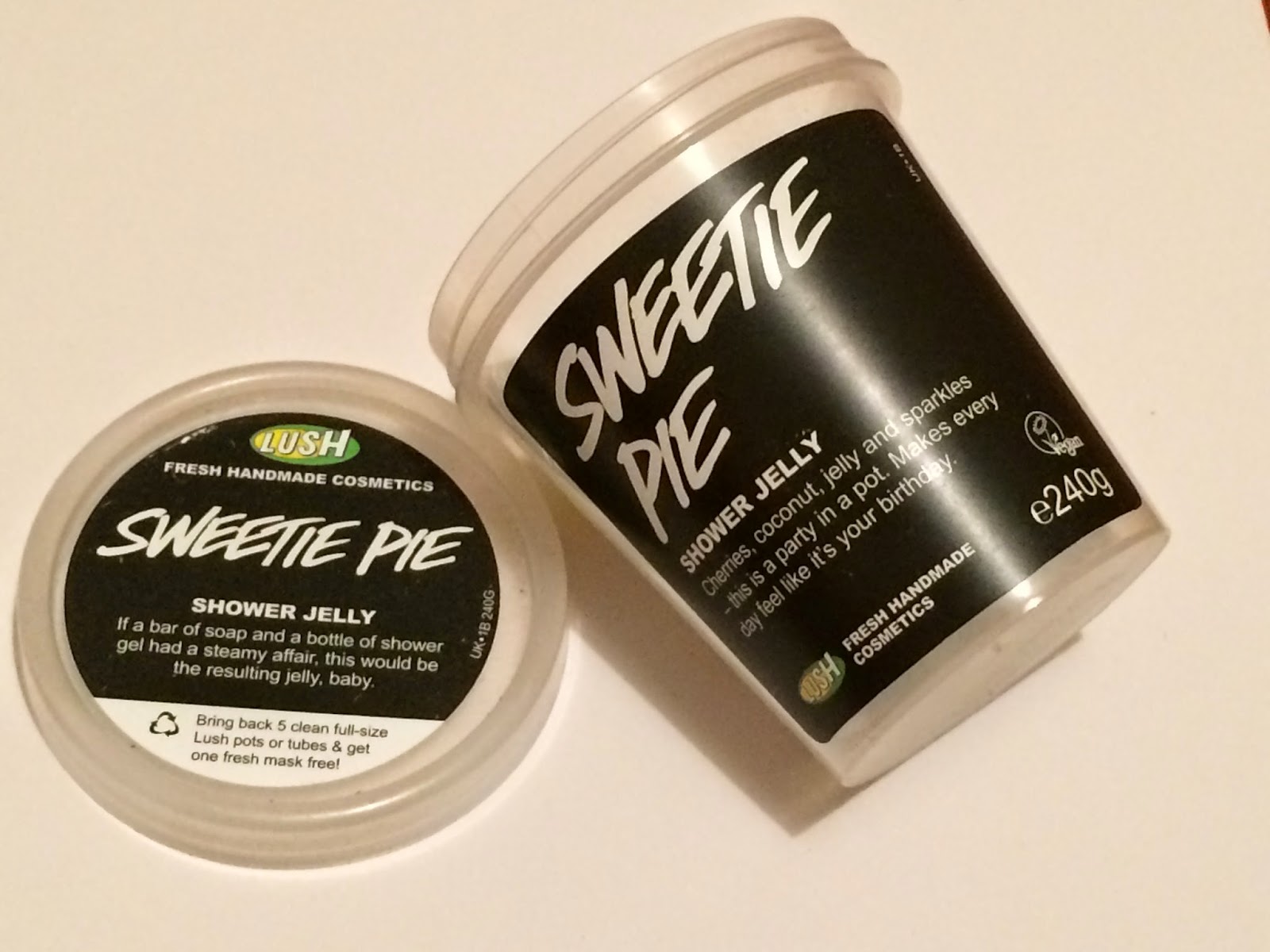 The apartment where I lived until August of last year was tiny and charmless, but it did have one feature that my current apartment lacks: a bathtub. After especially stressful days, I'd drop a sparkly Lush bath bomb into the tub (my favorites were blackcurrant Space Girl and apple-cinnamon Phoenix Rising), mix myself a bourbon and ginger ale, light a beeswax candle, and spend some time in the bath reading the New Yorker or a China Miéville novel. I now have a shower stall, which means no more fizzy purple baths, but Lush has provided for unfortunates like me. Sweetie Pie Shower Jelly is a dark purple jelly soap with a dash of navy glitter and a cherry-coconut scent. The jellifying ingredient is agar, not gelatin, which makes it suitable for vegans. I bought my first tub of Sweetie Pie over a year ago and was so dazzled by its appearance in the pot that I not only took pictures, but also kept those pictures on my phone for 15 months. I am a pack rat of pixels. 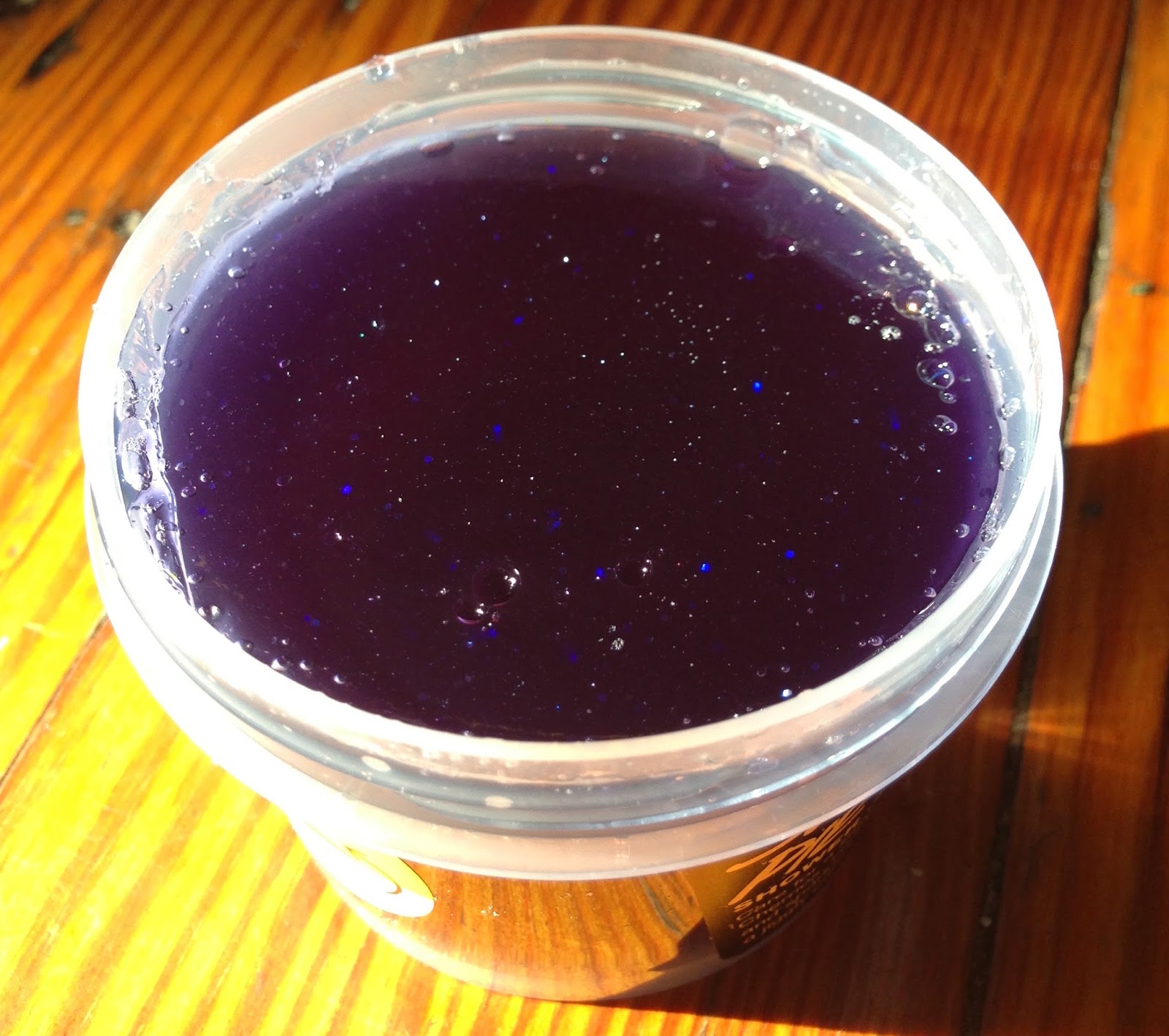 I looked at the Lush website just now and noticed that in addition to Sweetie Pie and citrus-scented turquoise Whoosh!, they have a seasonal shower jelly called Snowman. It's also citrus-scented, which seems like a missed opportunity, and it...resembles...something that is not a snowman. 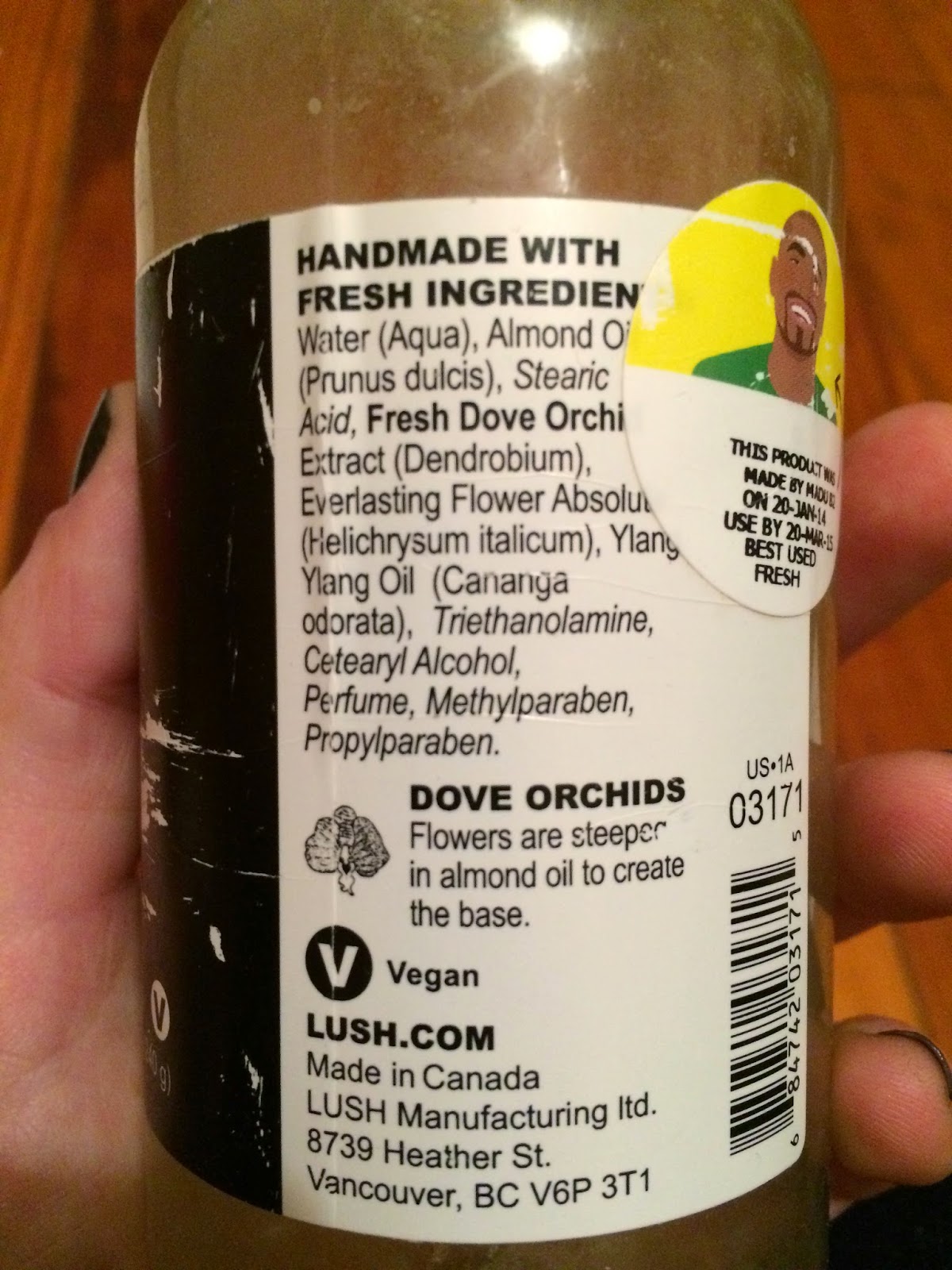 Also reviewed in my skincare post. I have no idea why the bottle looks so dirty: that just seems to be the color of the plastic. I've lost count of how many bottles of 9 to 5 I've gone through in the year since I discovered it. Despite the moniker "cleansing lotion," it does leave my skin feeling a bit dry, but that's nothing a moisturizer can't fix. Which reminds me, I'm almost out of my favorite moisturizer, First Aid Beauty Ultra Repair Cream. Is it just me, or does everyone run out of all their skincare products in the space of about a month?

I've now used up all the sheet masks I bought on my trip to New York a month ago: three Tony Moly masks and a Sephora-brand mask that I first tried back in August. Alas, I forgot to keep all the empty wrappers, so your consolation prize is a photo of me doing Serious Academick Worke while wearing the Sephora mask. 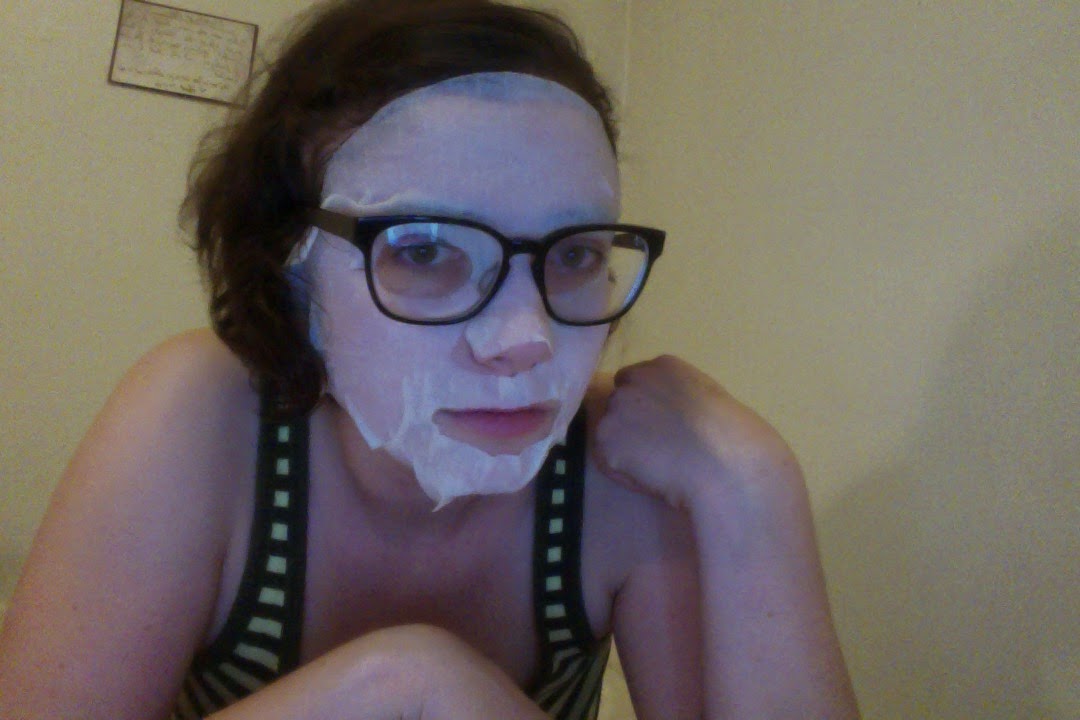 Sephora's version (a rather steep $6) is still my favorite of the sheet masks I've tried, but I also liked Tony Moly's "vitality" broccoli mask, and the Tony Moly masks ($3 each) certainly win for adorableness. 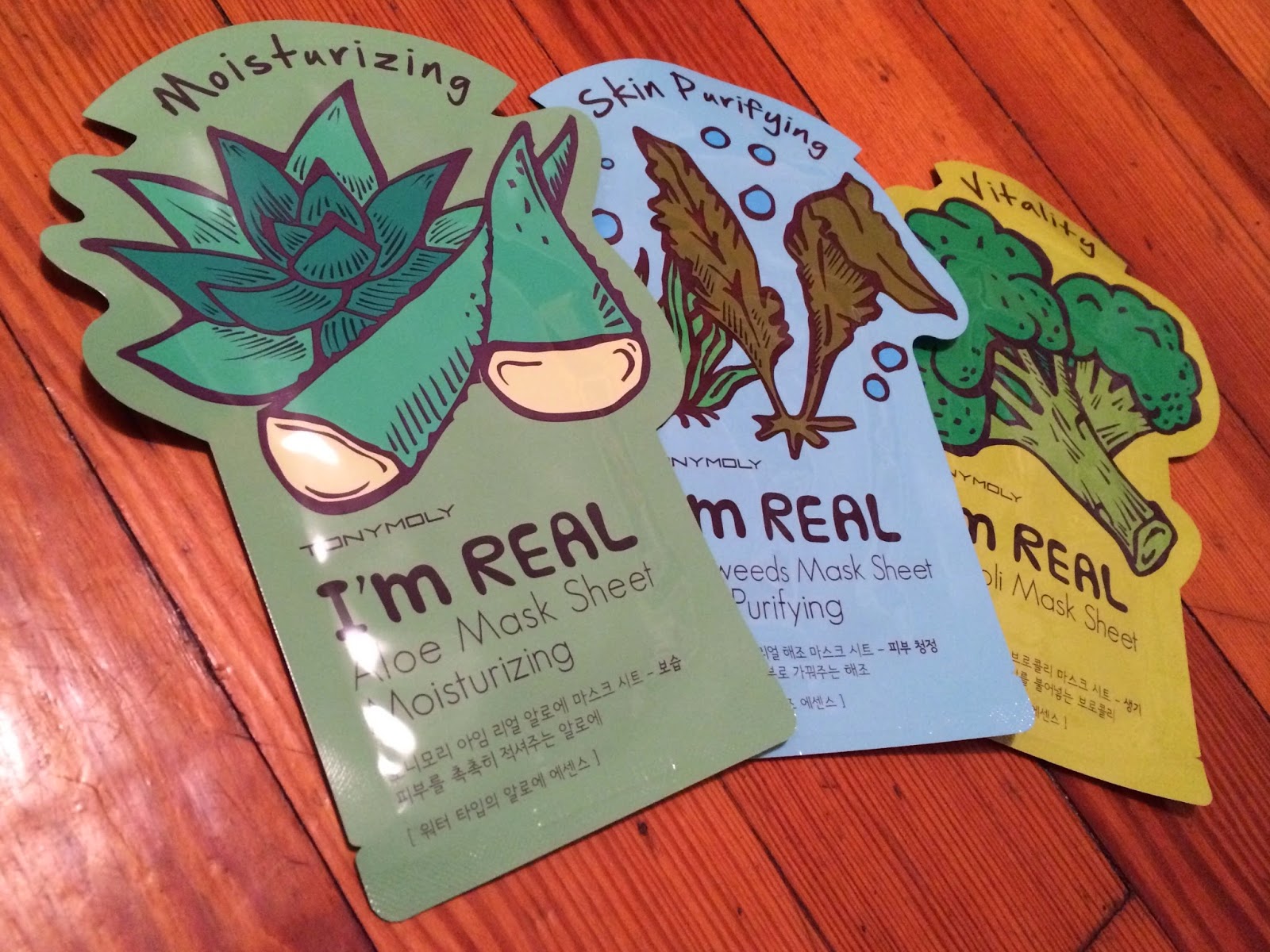 I hope you've enjoyed this tour of my trash; now I can throw out the plastic bag of empty containers that has been hanging on my closet doorknob for the past month, making me feel like a hoarder. Have you used up anything exciting recently?
Posted by auxiliary beauty at 7:26 PM