Notes: In my experience, sangria is almost always a mistake. I can't stomach the taste unless I'm tipsy to begin with, which means that when I find myself drinking it, it's already too late to escape a hangover. The first time I tried sangria was at a tapas restaurant on Little Clarendon Street in Oxford. A guy spent the entire evening hitting on me in front of his girlfriend, presumably to make her jealous. I guess it worked, or didn't work, because they're still together nearly seven years later. Men are the worst. So is sangria, but you don't see anyone using the hashtag #notallsangria. 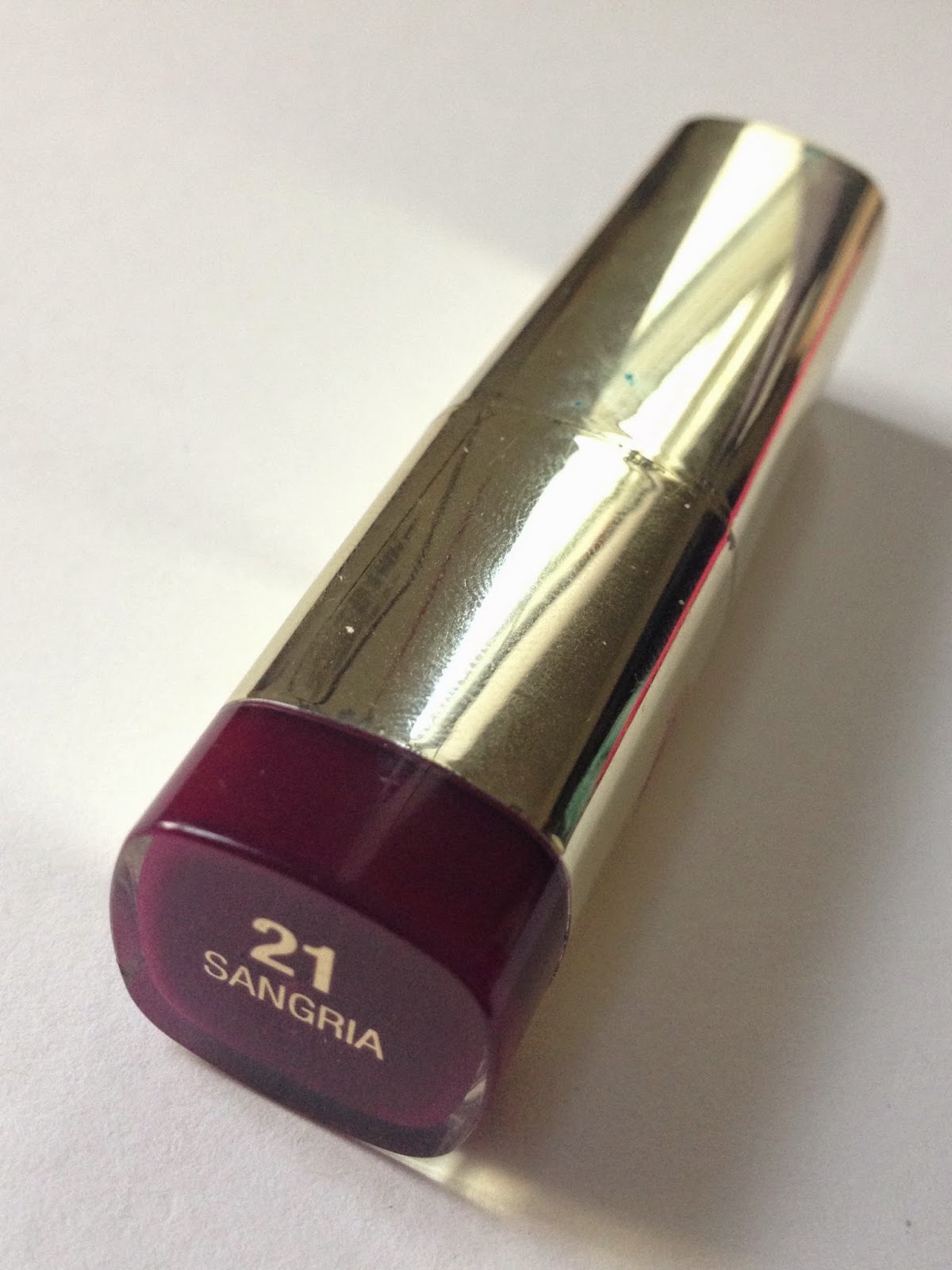 Buying Milani Sangria, a bright matte plum, was only slightly less of a mistake than drinking its namesake. I'd already tried two other Color Statement lipsticks, Flamingo Pose and Sweet Nectar, and had found them both drying. But I wanted a dark matte lipstick for fall, and I reasoned with myself that because Sangria had a different finish from the other two (matte, as opposed to creme), it might be easier on my lips. Never mind that matte finishes are not, as a rule, a welcome break from other lipstick finishes. What, you expected me to be reasonable when a plum lipstick was involved? You expected me to base a purchase on my personal experience? I don't think so. Plums and dark fuchsias will always be my weakness. 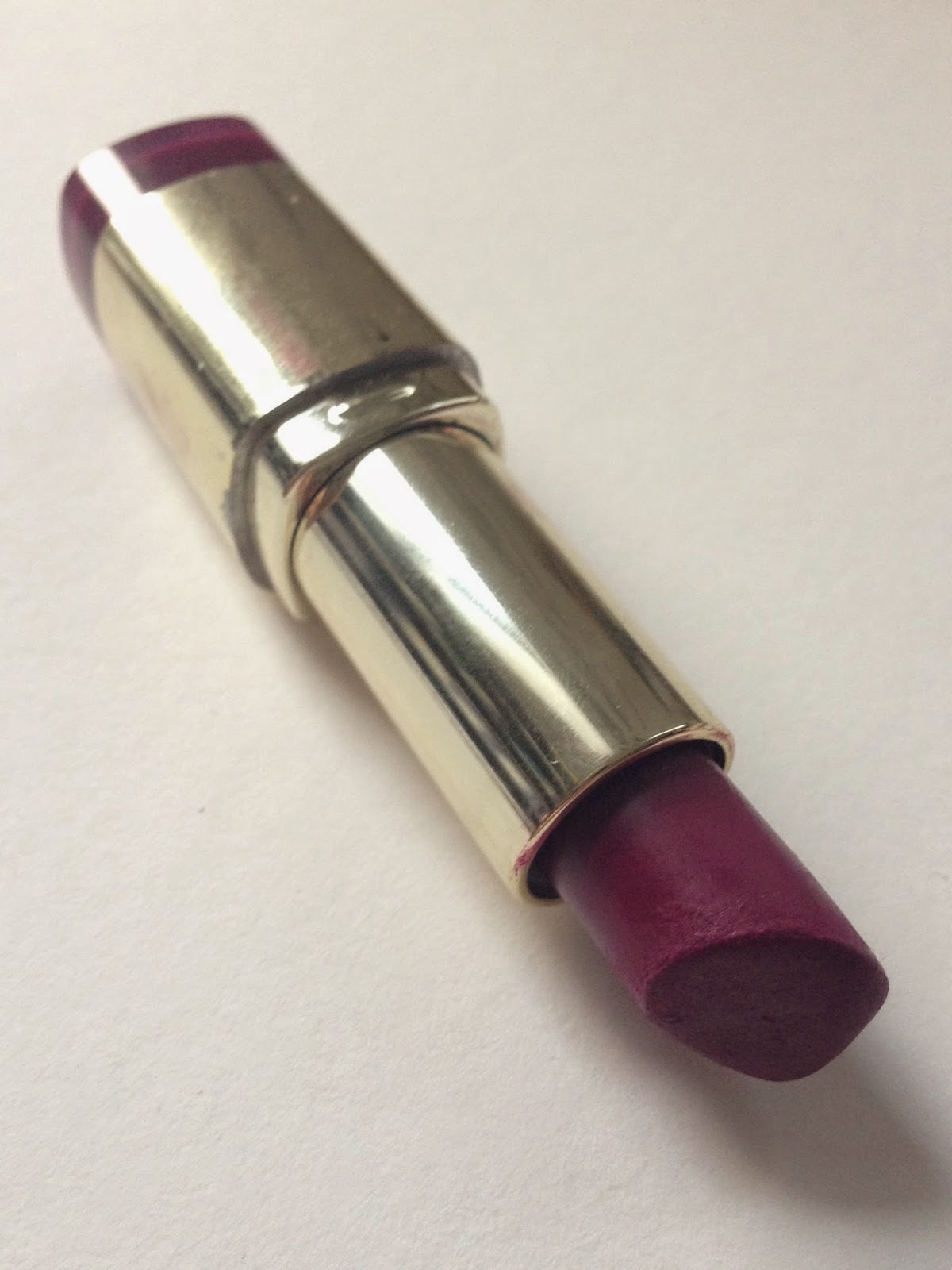 I was somewhat disappointed on both counts. Because Sangria's formula isn't entirely opaque, it becomes a deep bright fuchsia when swatched or worn, and not the witchy vampy shade I had hoped for. 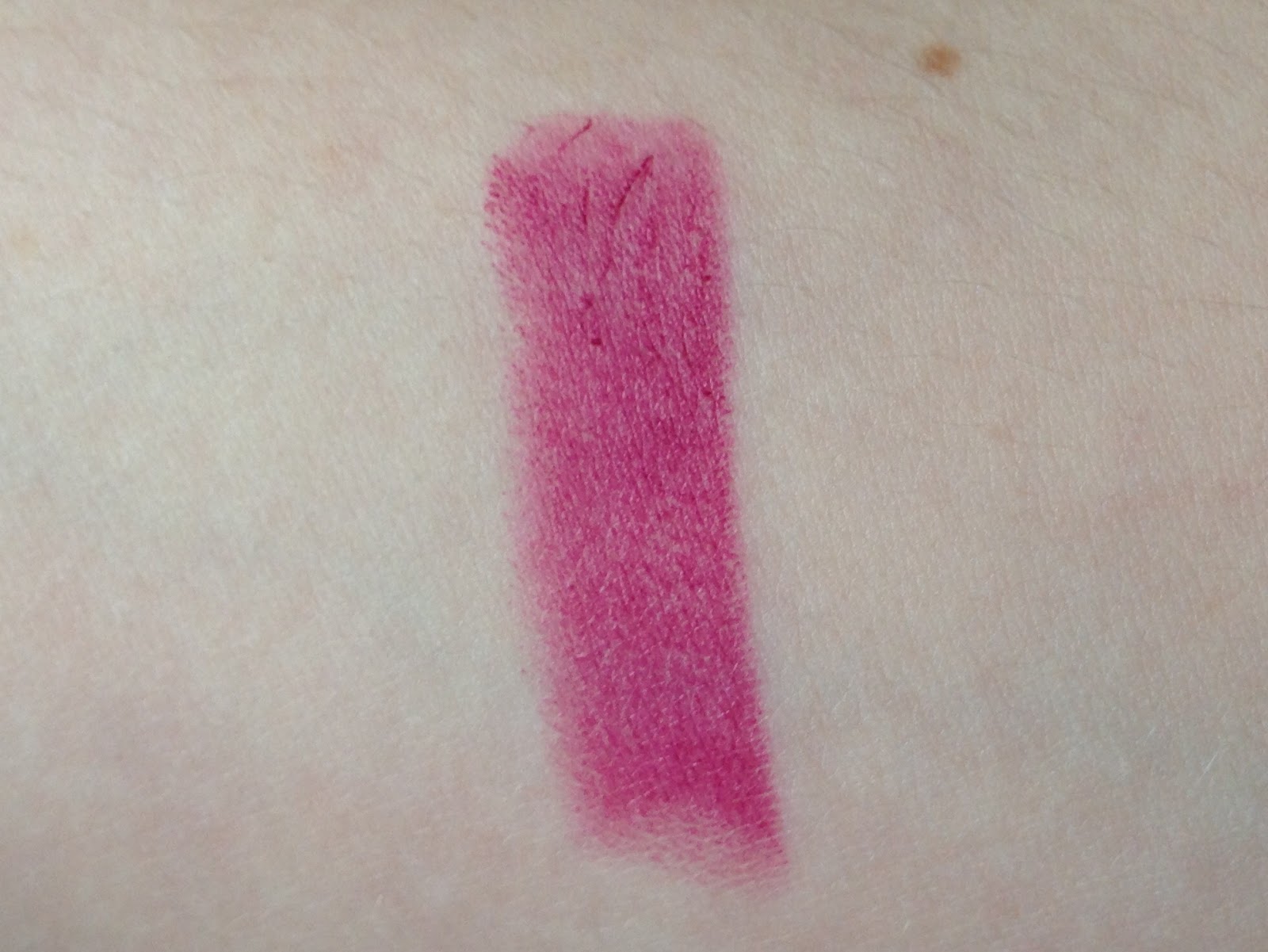 Sangria also has a dry formula, as the lip swatch below makes painfully clear. The lipstick drags when I put it on, and it clings to every dry spot: I might as well be applying a glue stick to my lips. And despite all this, it's not even a true matte! Semi-matte, yes, but not very different in appearance from Milani's creme formula. Oddly, I do find Sangria less drying than my two other Color Statements, but it's still uncomfortable to wear, and it has the cloying watermelon scent common to all Milani lipsticks. 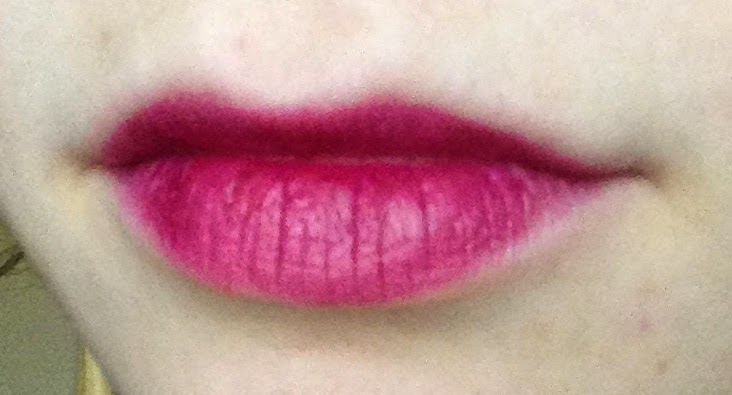 That said, I showed Sangria a lot of love last fall and winter: in fact, I used up about half the tube. I put it aside for spring and summer and didn't pick it up again until I was preparing to write this post, at which point I decided to wear it for a day to see if we had been unfairly estranged. My standards for lipstick comfort have evidently gotten higher in the last year, because I couldn't bear to wear Sangria for more than a few hours. Nor is it terribly unique in my collection: I have three similar plums, all of them more comfortable on my lips. Left to right: Revlon Plum Velour, Topshop Get Me Bodied, Milani Sangria, YSL Belle de Rose. 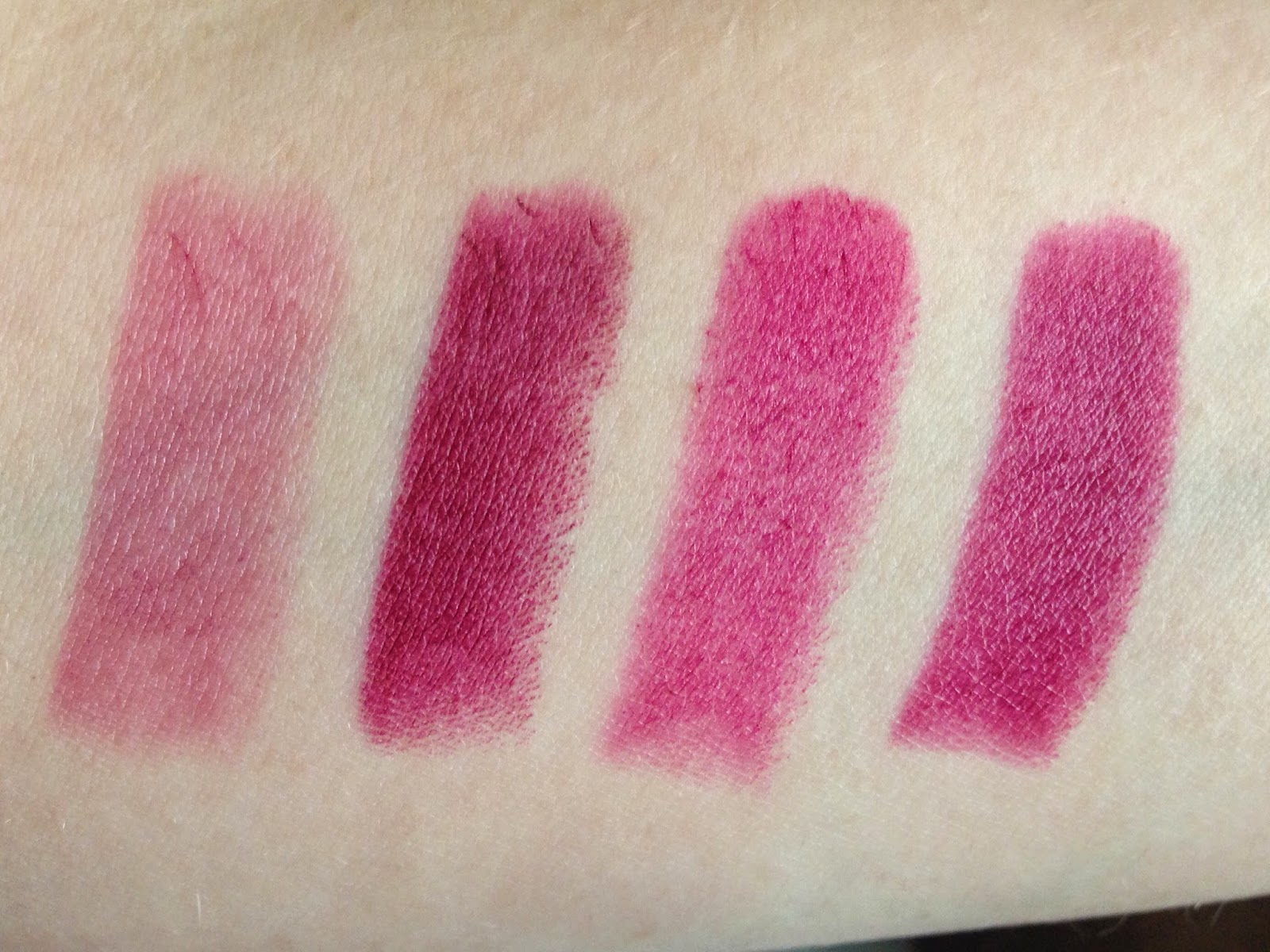 Sangria is the brightest and pinkest of the four, but it doesn't look dramatically different from a sheered-out Get Me Bodied when worn. 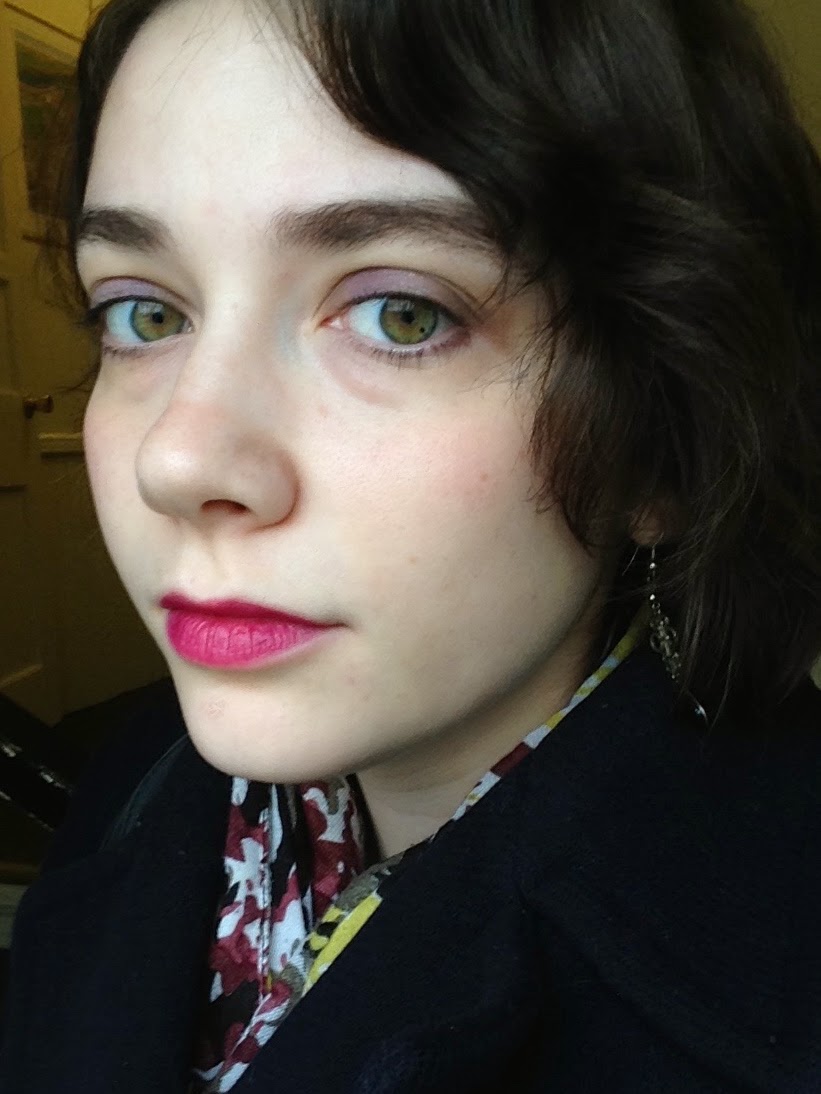 Other elements of this look: Kiko Infinity Eyeshadow #251 (lavender glitter) over NARS Lhasa; NARS Mata Hari blush; cold December morning light. I look disgruntled because I haven't had my coffee yet.

Writing this post has made me decide to give up buying Milani. (Except for the occasional nail polish: I like their recently discontinued formula and have been wondering about their new one.) I've tried quite a few Milani products over the last two years, but have yet to be deeply impressed by any of them. It's a shame that I can't continue to support one of the only cruelty-free drugstore brands, but so it goes.
Posted by auxiliary beauty at 3:34 PM