Notes: How excited am I to write this post? So excited that I broke my (never very strict, let's be honest) Lipstick Chronology rule in order to review Mysterious Red out of order. It's the holiday season, after all: what better time to feature my staple red lipstick, the one I can trust to flatter me whenever I wear it? 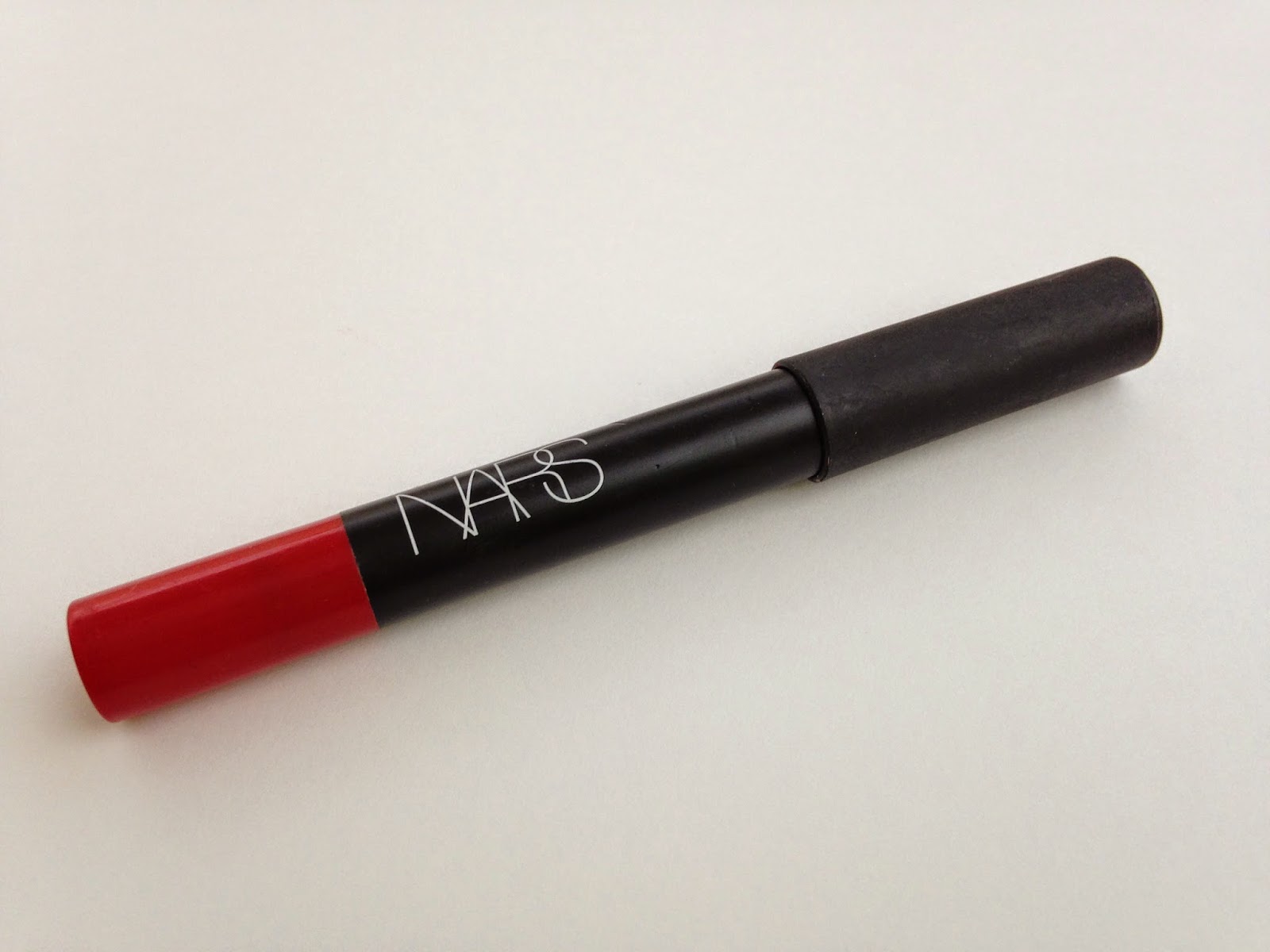 Mysterious Red was released as part of the NARS fall 2013 collection. Assuming that it was limited edition, I used it sparingly for an entire year, mourning the transience of earthly things every time I sharpened it. But on my birthday this November, while browsing the NARS display at Sephora, I noticed that Mysterious Red had been made permanent! It felt like an especially nice birthday present from NARS to me. Plus, now I can review it without apologizing for praising an unavailable lipstick. 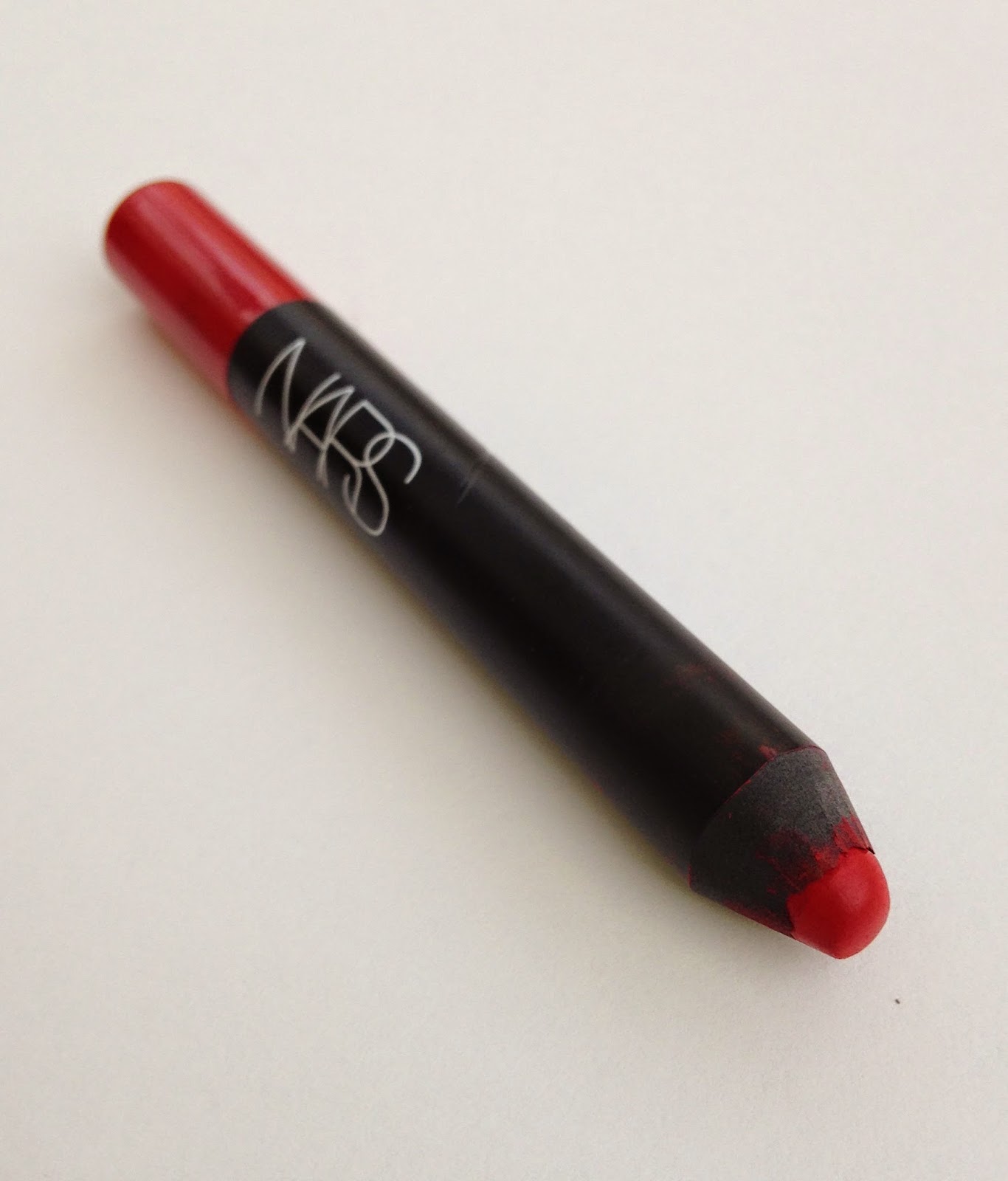 A year ago, I realized that I'd never found the perfect matte red lipstick. I had a few satin reds, but didn't wear them very often. To my eyes, a red with any hint of shine reads as "sexy," and I wanted a more businesslike red: pure pigment, no distractions. I was also curious about the NARS Velvet Matte Lip Pencil formula, which seemed to be many people's matte-lipstick holy grail. Wary of buying a limited-edition lipstick that I might fall in love with and never be able to replace, I tried on two cool reds from NARS' permanent line: Dragon Girl and Cruella. But white-based Dragon Girl was too bright, almost neon, while Cruella was darker and purpler than my Platonic matte red. Finally the SA suggested that I try Mysterious Red. The second I put it on, we both agreed: yes, that was the one. 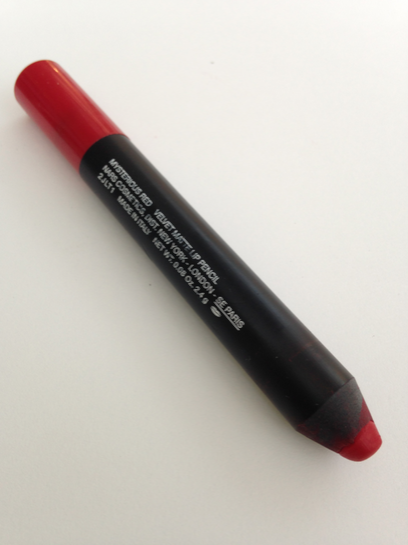 How to describe the sensation of connecting with a lipstick? Not putting it on and thinking "it'll do," or "this will look good when I have a bit of a tan," but "holy shit, I just got ten times more attractive"? It's sort of like falling in love, except it's not free. (It's $25, in Mysterious Red's case.) Or maybe it's like reading a book and seeing your own experiences and memories reflected back to you, made brighter and warmer by the author's powers of perception.

Love is a great mystery, but perhaps the greatest mystery of Mysterious Red is the matter of its undertones. Various bloggers have described it as "subtly warm-toned" (Temptalia), "warmish brick red" (Makeup and Beauty Blog), "a real wow red [with] a nice blue lean" (Perilously Pale), and "perfect cool red" (Beautezine). I notice that the bloggers who describe it as warm and cool are themselves warm- and cool-toned respectively, which might explain the divide. Personally, I see Mysterious Red as a neutral red leaning very slightly cool; then again, I'm neutral leaning cool. Maybe this is the sort of magic red that adapts itself to everyone's complexion. Though I usually roll my eyes when I see a lipstick described as "universally flattering," I can't imagine a skintone that wouldn't harmonize with Mysterious Red. 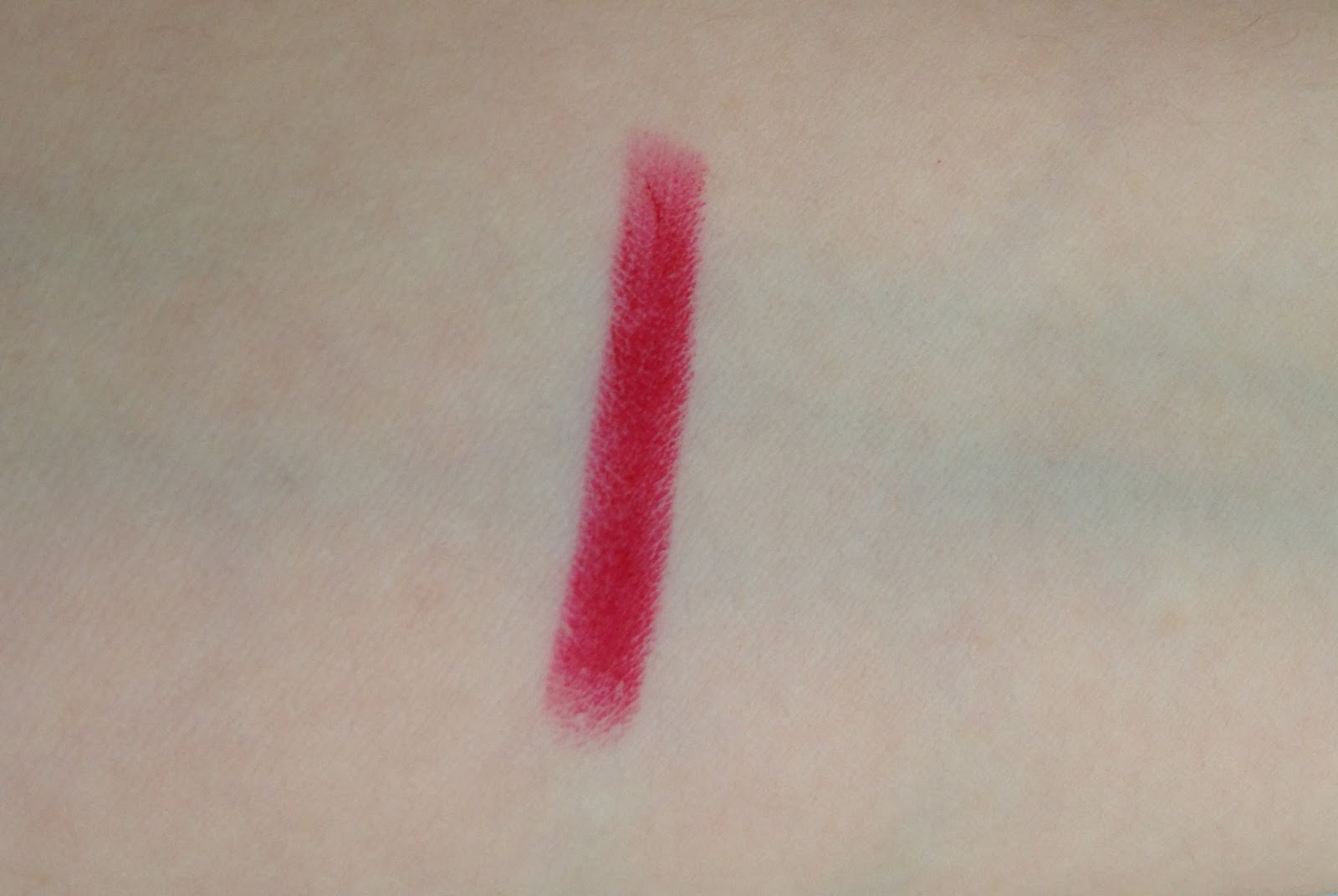 To shed some light on the undertone problem, I've made a few comparison swatches below. Left to right, warm to cool: Revlon Fire and Ice, NYX Alabama, Mysterious Red, Maybelline On Fire Red, NYX Bloody Mary. 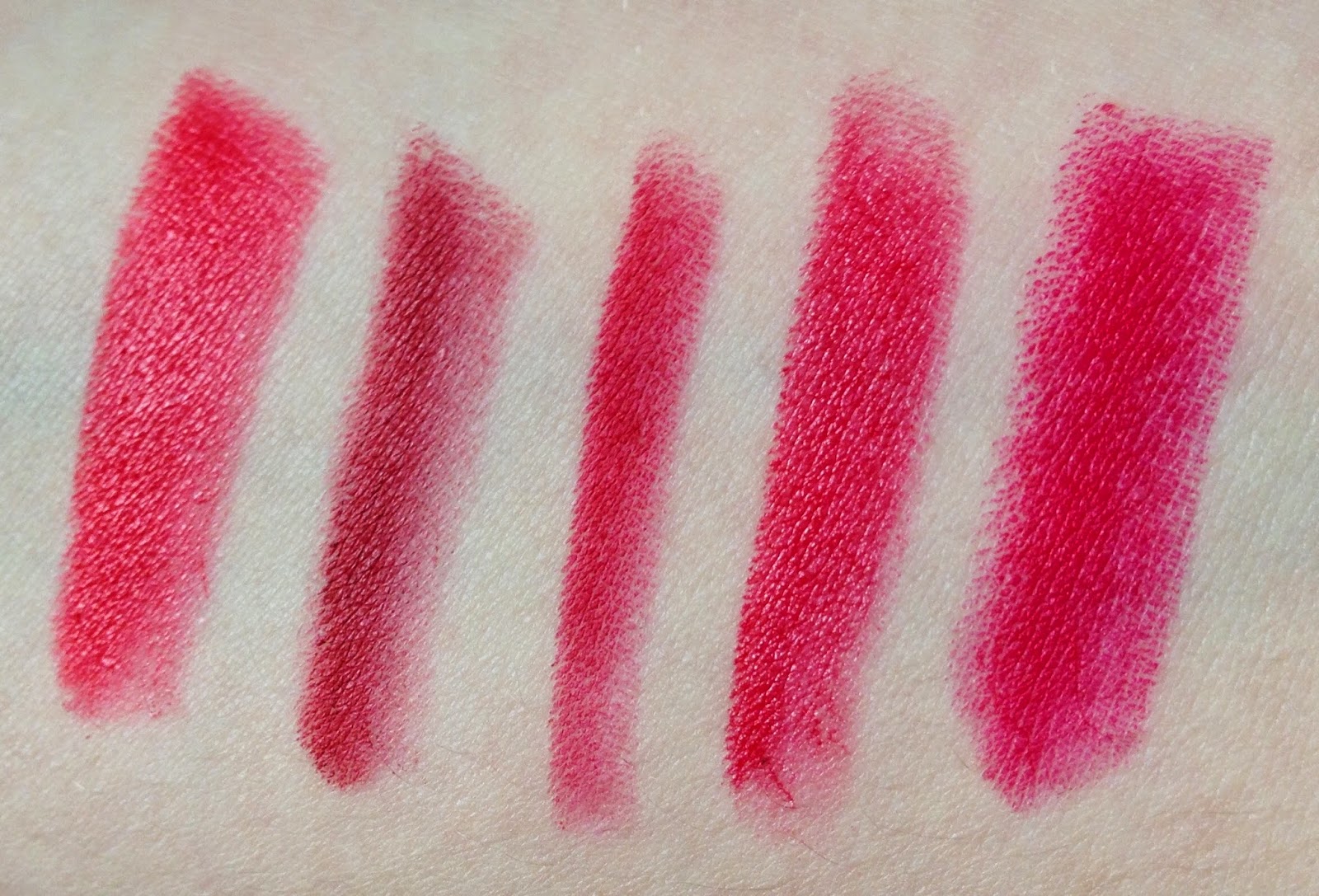 Mysterious Red is cooler than both Fire and Ice and Alabama, but warmer than cherry-red On Fire Red and pink-red Bloody Mary. It also sits in the middle saturation-wise: more subdued than Fire and Ice and Bloody Mary, but more intense than Alabama and On Fire Red. Mysterious Red is just red, no qualifiers needed. Not particularly bright or dark, warm or cool. Mysteriously un-mysterious. Bafflingly simple.

Anyway, here it is on my lips. This photo was taken outdoors in late-afternoon indirect sunlight.

As you can see, the NARS Velvet Matte formula is very matte indeed (though with a hint of sheen), which means it feels a bit dry when worn. It glides on smoothly and deposits a spectacular amount of pigment, but it does make my lips uncomfortable after a few hours, which I expect from any lipstick with a finish like this. Mysterious Red doesn't come off when I drink, and it stands up decently to food as well. It's completely scent- and taste-free. The one big drawback to the NARS lip pencils, which many others have noted, is that they don't twist up. Sharpening them wastes product, and fishing the shavings out of the sharpener and smearing them on one's lips is a lost cause. I've just had to resign myself to feeling a pang whenever I hear the sharpener's blade rasp against the wood of the pencil.

Over the past year, I've taken a truly embarrassing number of selfies featuring Mysterious Red. Let's pretend that I've done this for the sole purpose of showing you how the color looks in various lighting conditions. How admirable of me! First, a photo from today. Taken outside, in the same cloudless late-afternoon light as above: 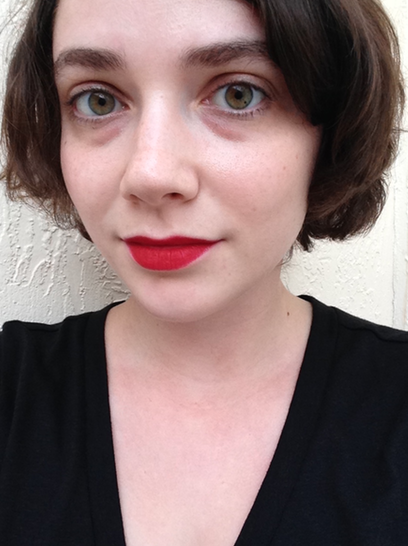 November morning, on a train: 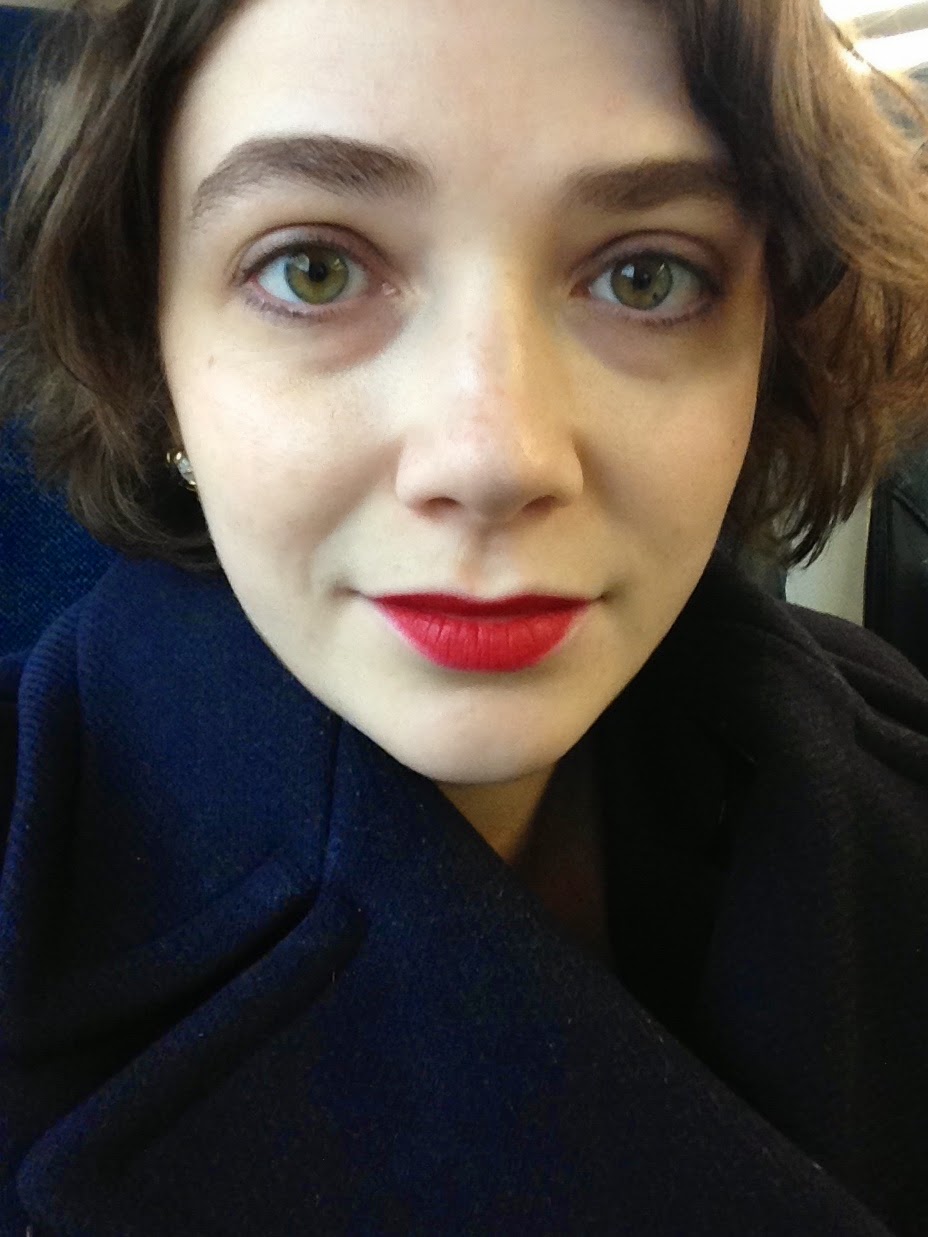 Back in March, at night, with artificial lighting and pixie cut: 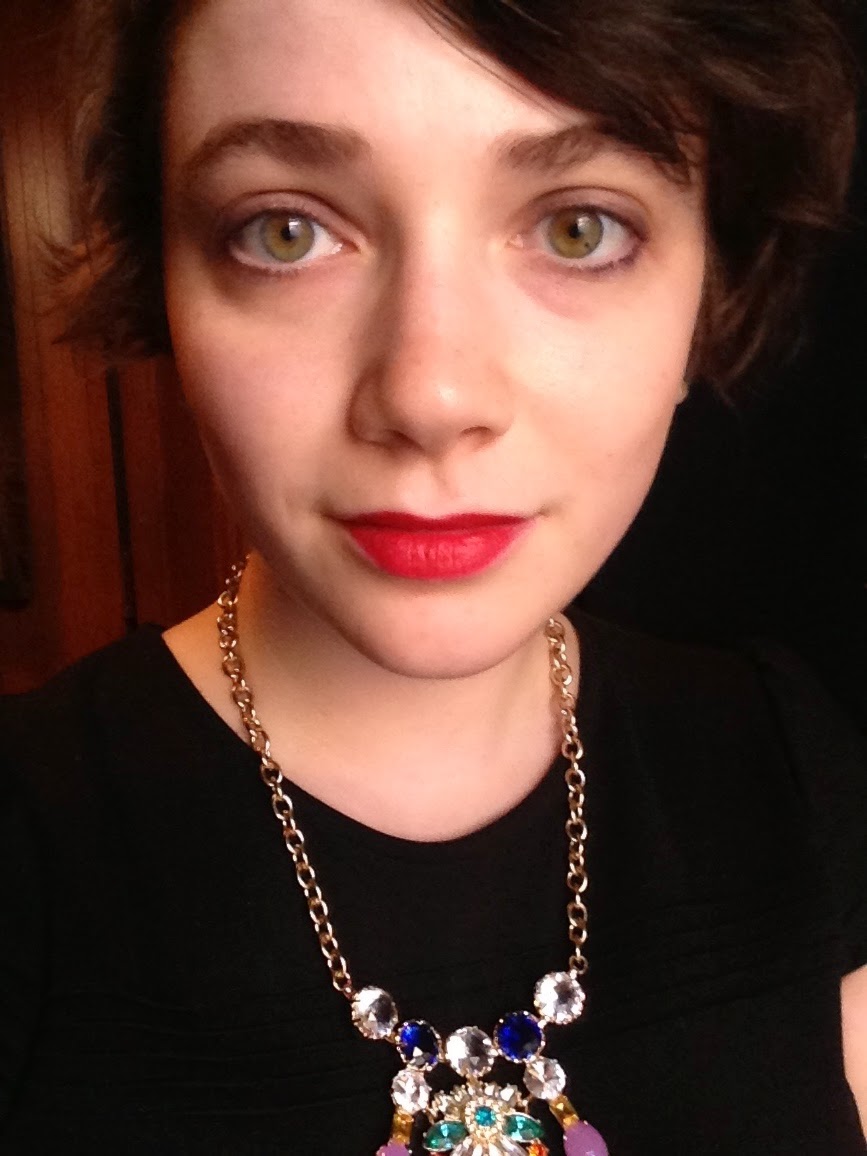 These three photos reveal, first, that I wear too much black; second, that Mysterious Red is always intense but never showy. I think NARS must have added a hint of brown to mute what would otherwise be a screamingly bright red. Because of this effect, I feel comfortable bringing Mysterious Red into polite company: in fact, I wore it to give a conference paper in May.

So far, I haven't been tempted to buy another NARS lip pencil, because they really are expensive for their size and for the amount of product that disappears with each sharpening. But I suspect I'll repurchase Mysterious Red when it runs out. It's my red, a red I don't have to think about. It just works. Few things in life just work; when you find something that does, it's a good idea to keep it.
Posted by auxiliary beauty at 10:03 PM