This look had a rather complicated genesis. I stayed up last night watching Lisa Eldridge videos in order to learn some new eyeshadow techniques. (This video was my favorite: I wish I'd known about it before attempting my Cindy Crawford face four months ago.) Then I went to bed and had a classic dissertation-anxiety dream: I was sitting in a dark, dingy Starbucks, scrambling to finish a chapter in advance of an urgent deadline that had crept up on me, while a creepy dude tried to strike up a conversation. Then I woke up and started mulling over all the academic tasks facing me in the next two weeks. Then I got some news that made me wonder, not for the first time, why great things so often happen to awful people. I dealt with all this frustration in a two-step process: a caps-locked rant on my private Twitter, followed by an attempt to cosplay my mother in 1967. 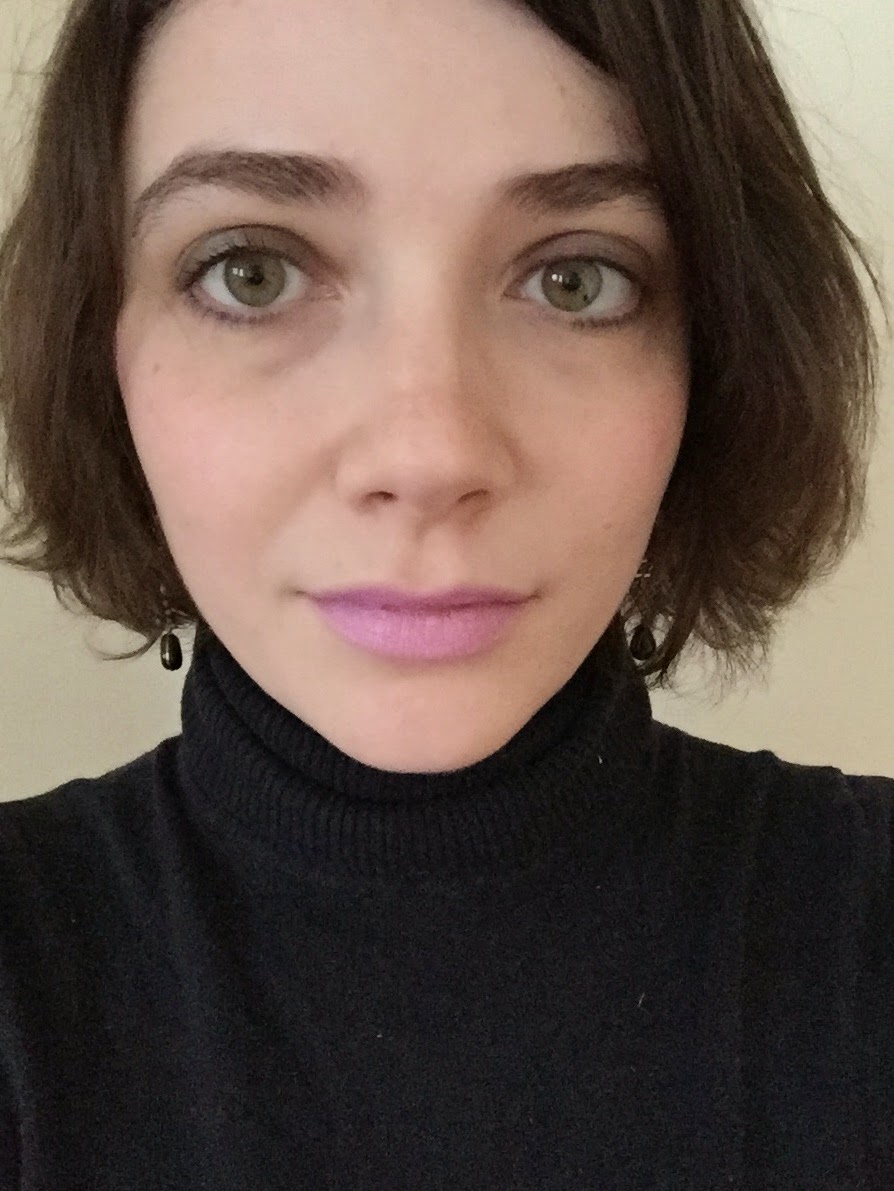 In my recent review of Maybelline Lilac Flush, I promised a '60s-inspired look centered on LF's stark white-based pinky lavender. Since I was wearing a turtleneck today ("feels like 7º" is not something you want to see on your weather app when you wake up), I couldn't resist the chance to go mod. I didn't have a specific image in mind, though I suppose I was envisioning something like Sun Fei Fei's pastelicious look on the cover of L'Officiel from June 2011. Mostly, though, I was thinking of my mother's teenage love for pastels, and remembering her story about holding the point of her black Maybelline pencil liner over a flame because the formula was too dry. Hardcore.

I filled in my brows with theBalm Sleek eyeshadow, but didn't use gel for my brows or primer for my eyelids, because I wanted the overall effect to be smudgy and lived-in. I covered both mobile lids with NARS Lhasa; then, using a light hand, I brushed theBalm Serious, a matte black, along the upper and lower lashlines and into the creases and outer corners. I blended Serious into Lhasa, then smoked it out a bit. Serious is very pigmented, so a little goes a long way. My mascara, as always, was CoverGirl LashBlast Length. For blush, I used a light dusting of NARS Coeur Battant, a bright fuchsia, followed by a heavier layer of Tony Moly Cristal Blusher in Milky Violet. I've found that although Milky Violet doesn't provide my longed-for pastel pop on its own, it works to pastelify other blushes.

As I'd hoped, taking ten minutes to play with makeup and try something outside my usual repertoire greatly decreased my stress. (I texted my mom a photo of my makeup and she dubbed it "groovy" and "very '60s," which was all the approval I needed.) Life might suck sometimes, but at least I looked cute--and if that's not a reason to wear lilac lipstick, I don't know what is. There are worse controlled substances to rely on.
Posted by auxiliary beauty at 5:30 PM