...or, How AB Flouted the Resolutions She Made Just Five Days Ago. 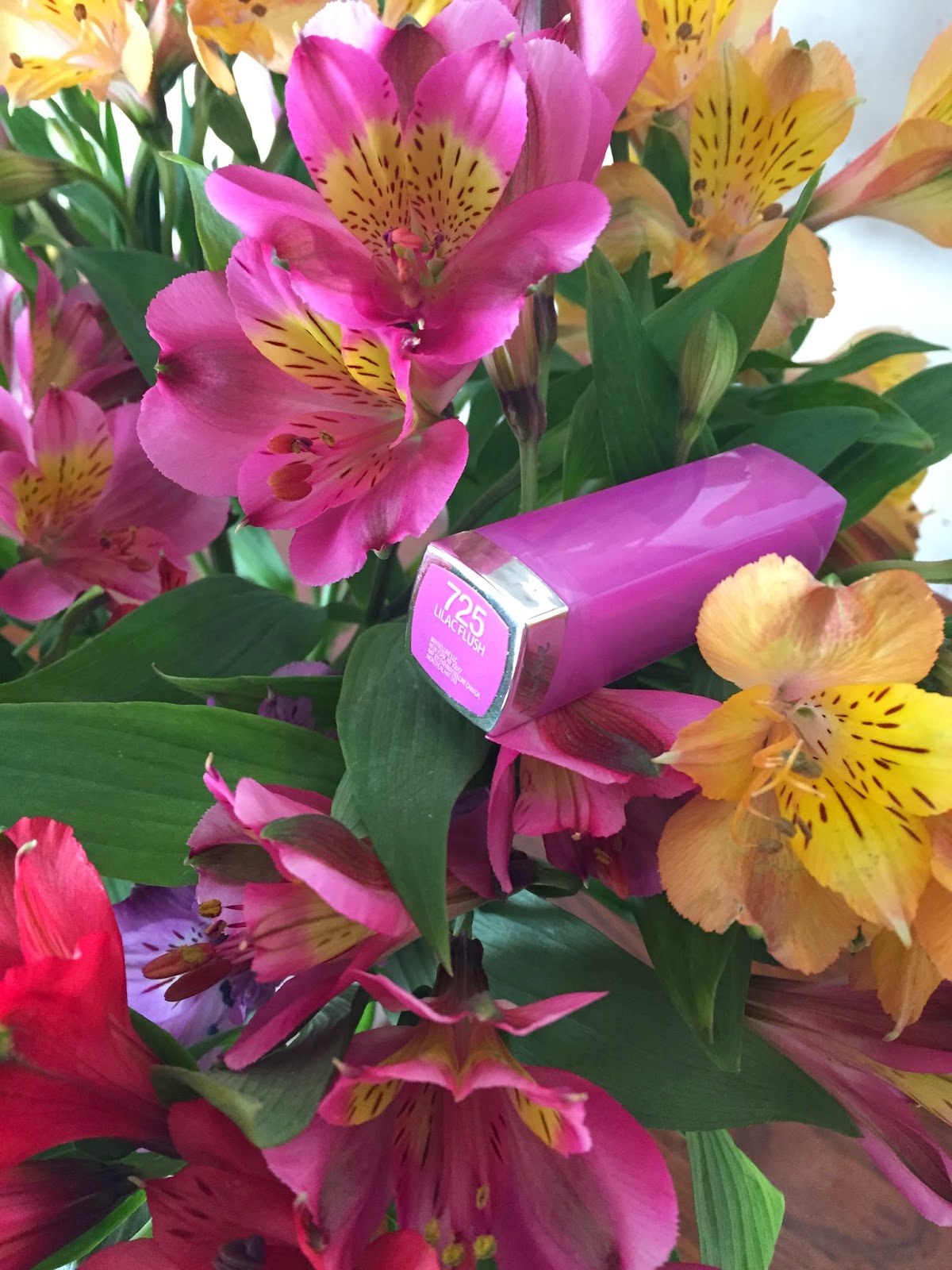 In my defense, I got this lipstick at the end of December. (Nor did I spend my own money: my mom bought it for me, if you must know.) But I had already planned out my resolutions for 2015, and one could argue, if one were determined to impugn my character, that I cannily squeezed in the lipstick before the new year began. This is not a purchase that represents quality over quantity; it's not a product from a new-to-me indie brand; I bought it in part because it was a new release; and I can tell you right now, it's not going to inspire a creative or introspective post. I just sort of lost my head when I saw those pink tubes lined up in their display at Target. And they were $5.49 each! I'm not made of stone. 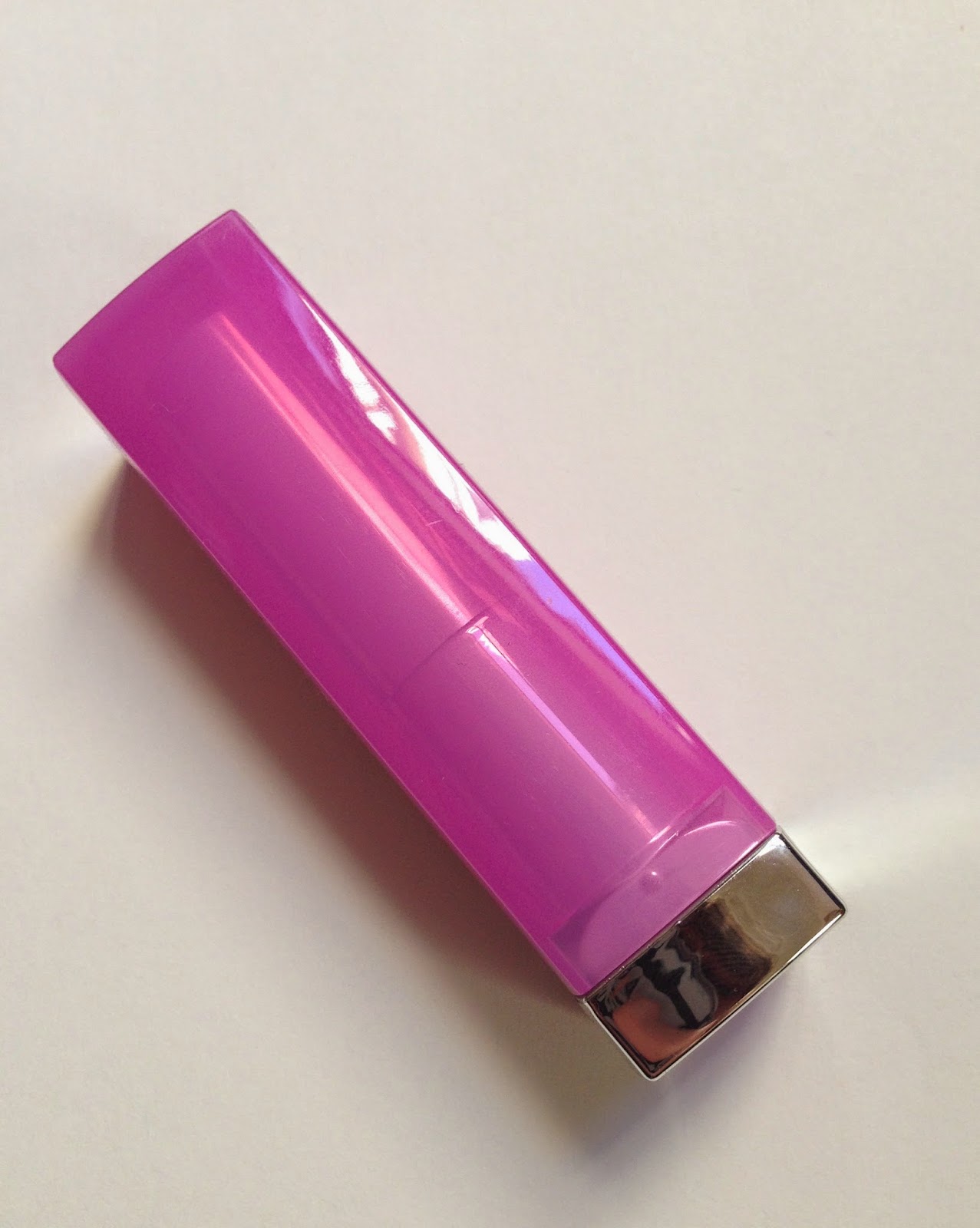 With the well-deserved success of the Vivids line in 2012, Maybelline figured out that millennials have an endless appetite for lipsticks. We can't afford cars or houses (though the Atlantic believes that we just don't want them, because who would want shelter or transportation?), but we do have pocket change to spend on dozens of variations on pink, red, and nude. Accordingly, Maybelline released the Buffs at the beginning of last year and the Creamy Mattes in the fall, and Spring 2015 brings a more vernal lineup: the Rebel Blooms, housed in pretty peony-pink tubes. I'm not sure what's so rebellious about a collection of ten pastel and nude lipsticks, though I'll admit that their names--Orchid Ecstasy, Barely Bloomed, Lilac Flush--do sound like extracts from Georgia O'Keeffe's unpublished erotic fiction. 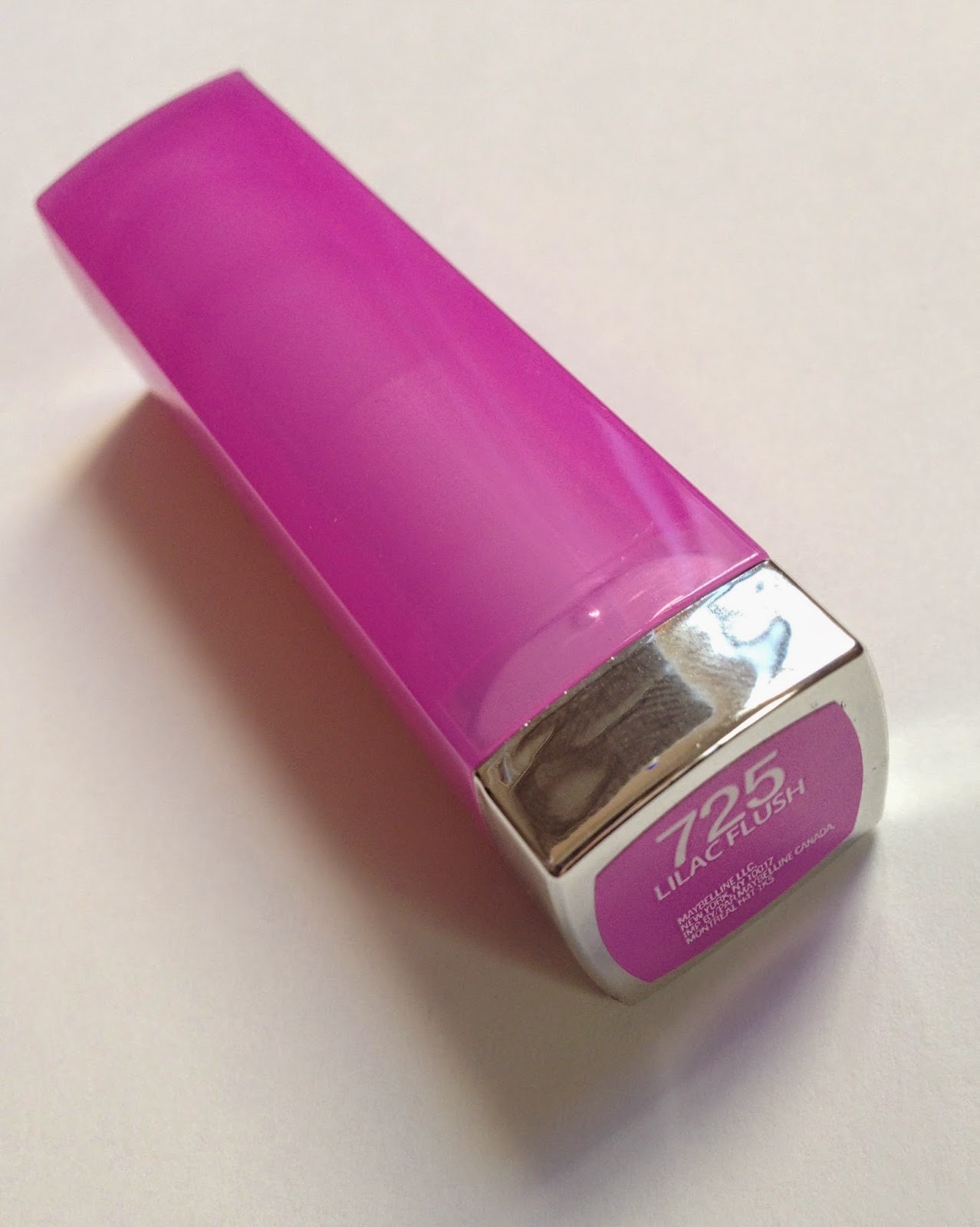 Lilac Flush is a white-based pinky lavender. In the tube, it looks decidedly purple... 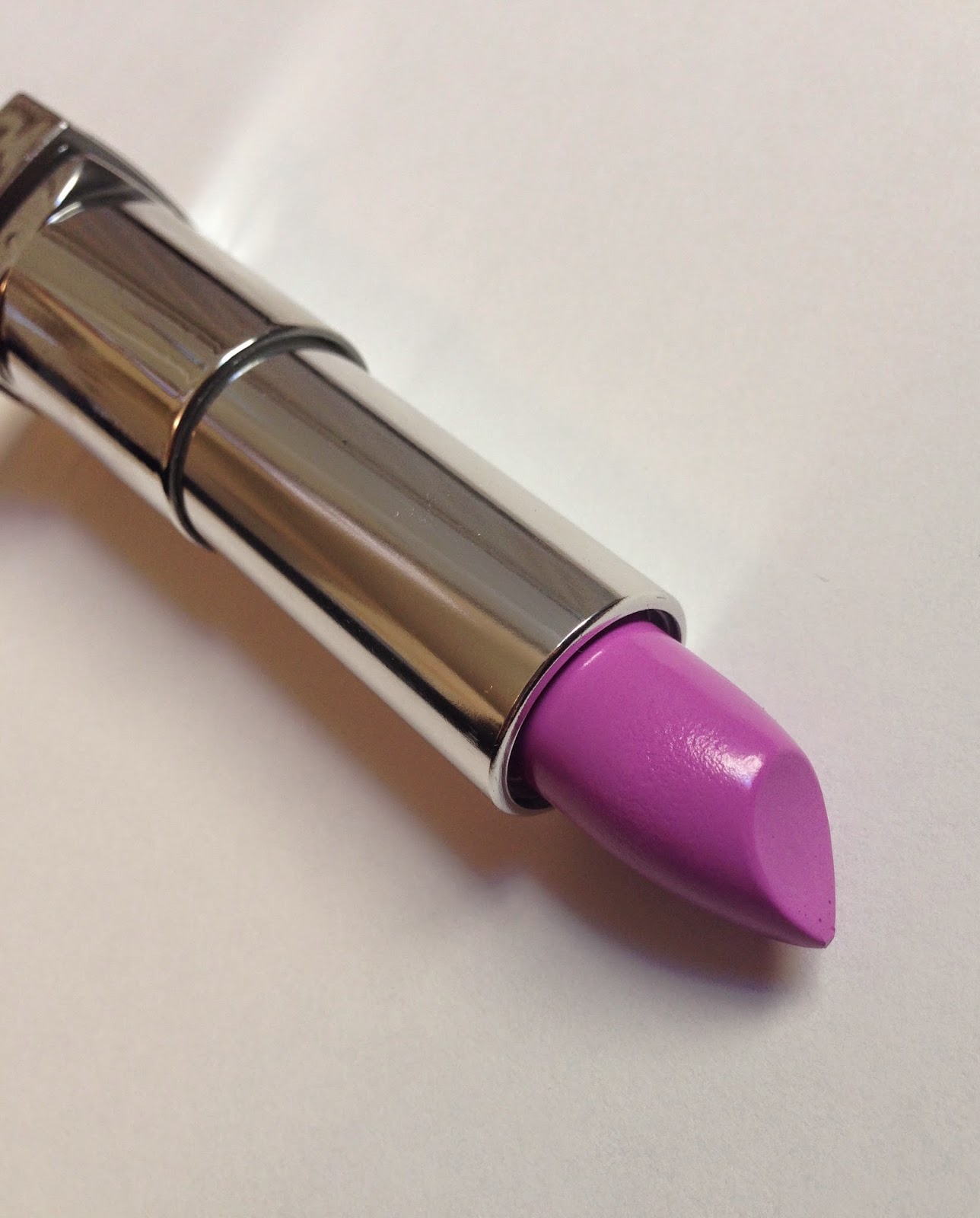 ...but when swatched on my arm, it turns into a cool, pale lavender-pink reminiscent of MAC Snob or Saint Germain. 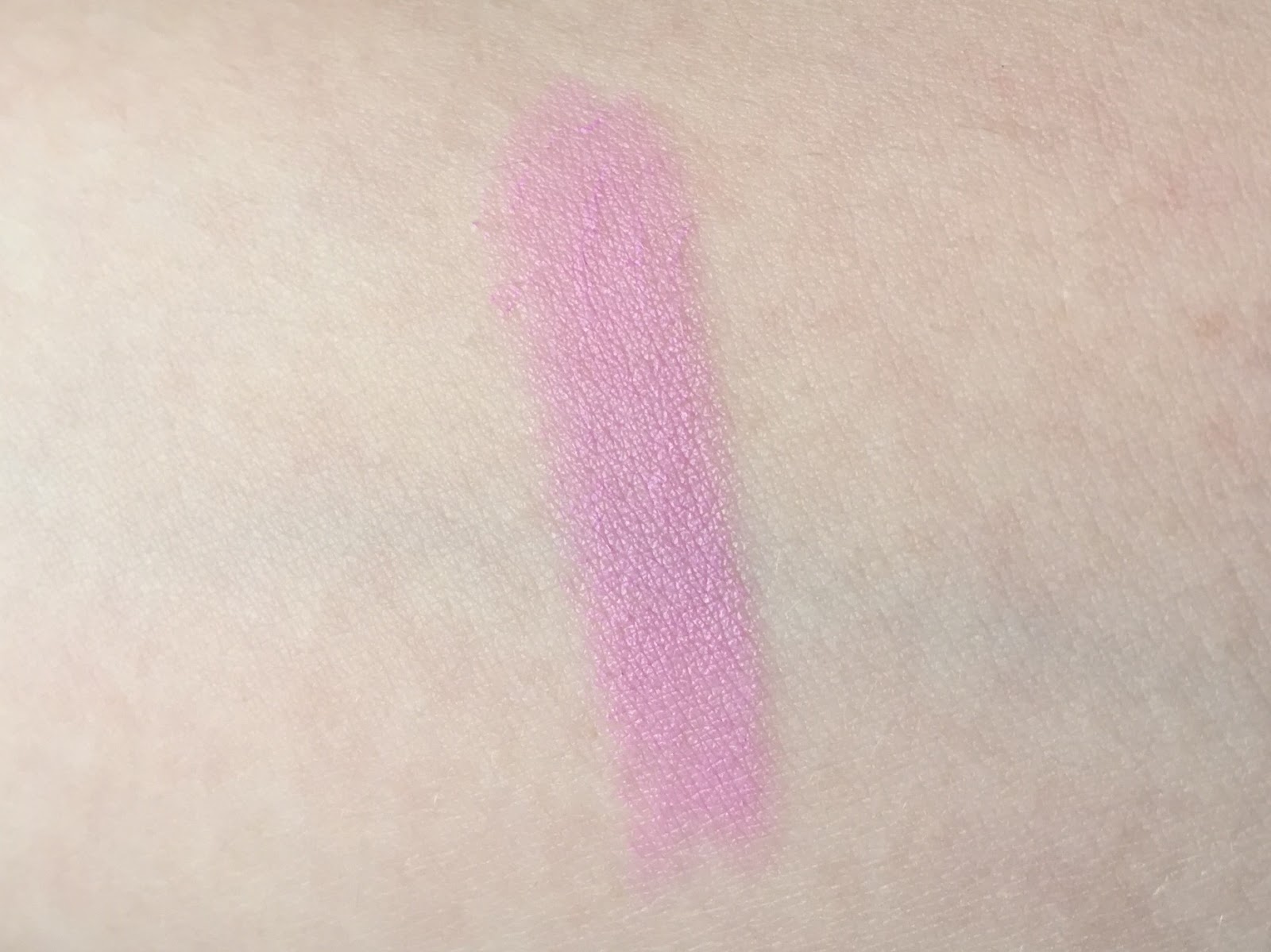 Here it is swatched between two of my purple lipsticks: Maybelline Brazen Berry, left, and MAC Up the Amp, right. First photo in shade, second in direct sunlight, both indoors. 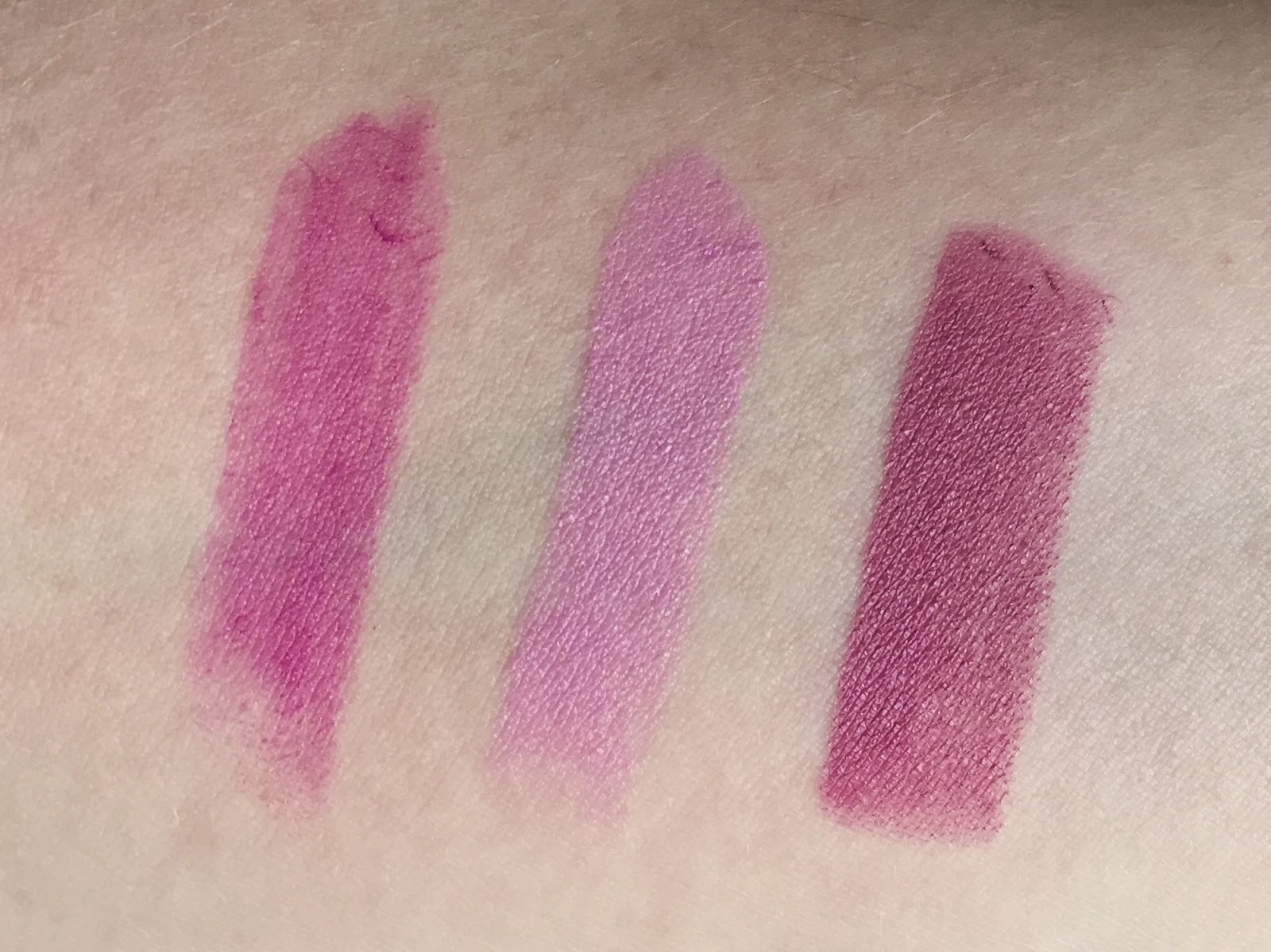 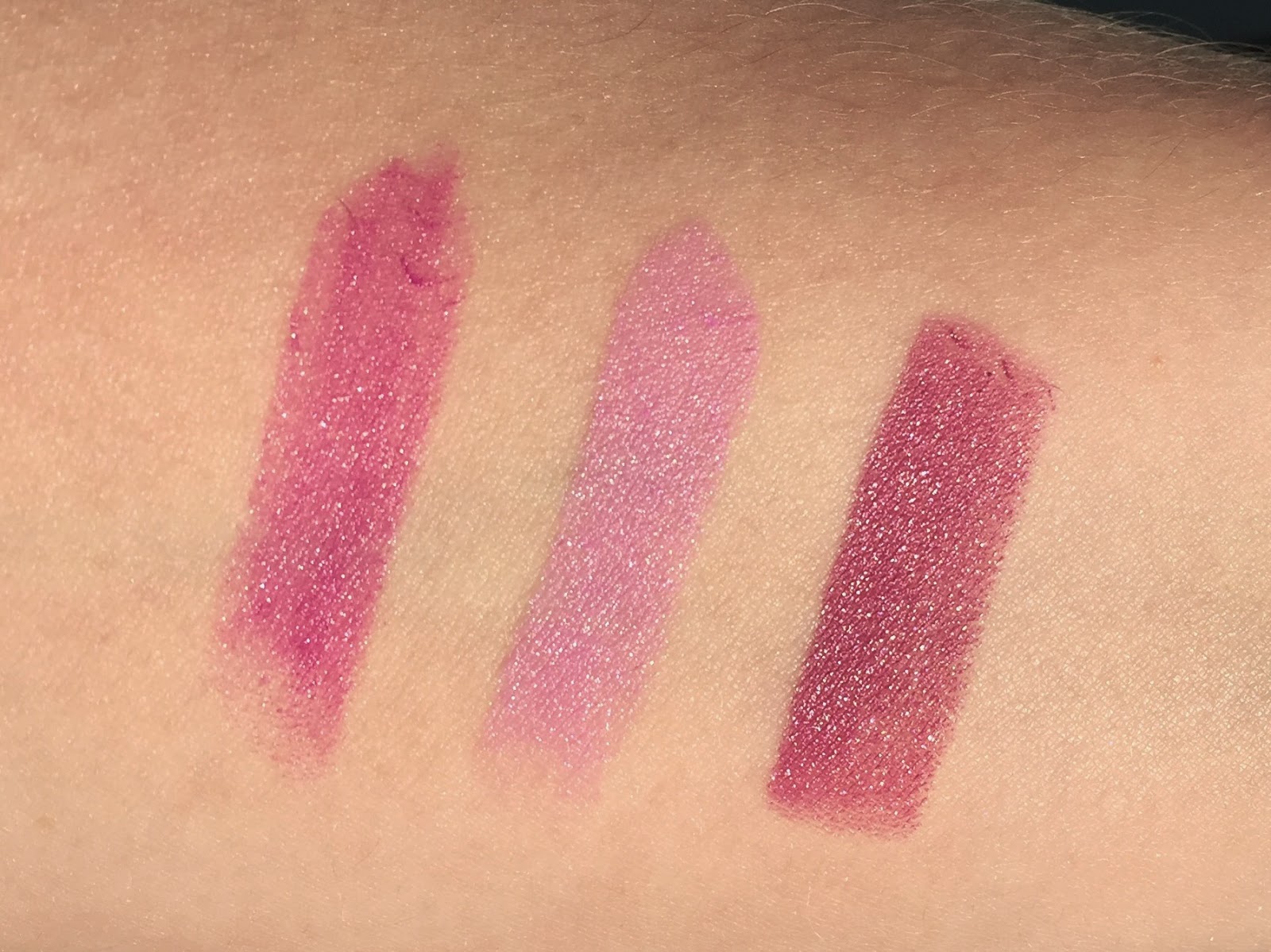 Lilac Flush has the standard Maybelline satin formula: not jelly-soft like the Vivids, but slick, shiny, and semi-opaque (I need to use two coats for full coverage on my pigmented lips). Like most milky pastels, Lilac Flush tends to emphasize imperfections in my lips, and I'd recommend exfoliating before putting it on. It looks more pink in some lights and more lavender in others, but this photo is a good approximation of how it usually appears on my lips:

Lilac Flush is the sort of color that confused me in the days when I assumed that because I had cool-toned skin, I could wear any cool-toned lipstick. (She says, as if those days weren't last year.) I was lucky to find Kate's series of posts on seasonal colors, which taught me that I look much better in saturated cool colors than in muted ones: in seasonal terms, I'm a winter and not a summer. If I'm not mistaken, Lilac Flush is a summer color, and I honestly don't think it's the best shade for me. I'm having a hard time thinking of a skin tone that it would flatter; it might just be the sort of lipstick that looks a little jarring and unnatural on everyone. That's part of its charm. 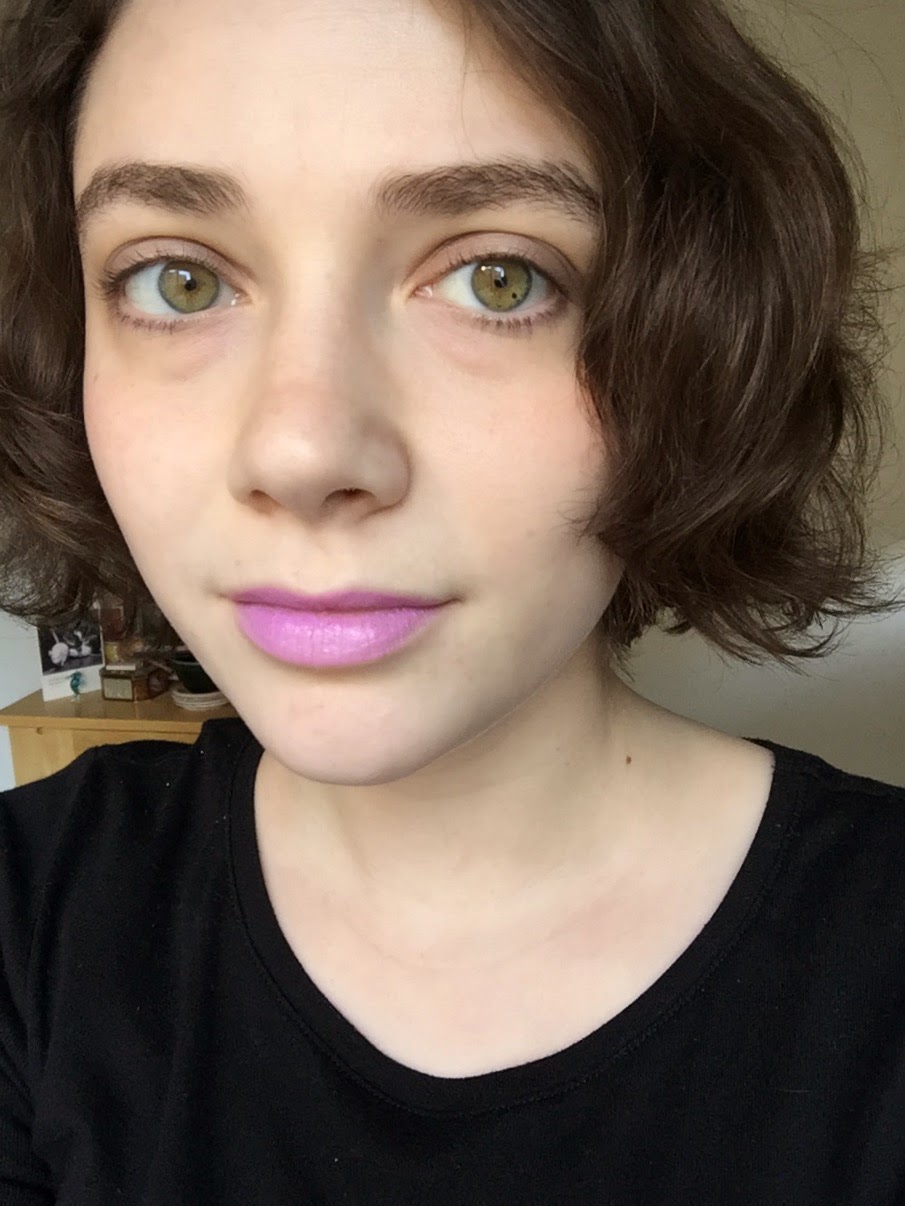 Ideally, I'd pair this lipstick with a stronger eye, but I don't have the right materials here in San Francisco. I left most of my eye makeup back home and forgot to bring my travel staple, theBalm's Nude 'tude palette, which would come in handy for its matte black shadow. I don't even have access to a black eyeliner! So instead you get the most stereotypically me of all my looks: NARS Lhasa eyeshadow, CoverGirl LashBlast Length mascara, NARS Mata Hari blush, and Lilac Flush on my lips.

I thought about passing on Lilac Flush to my mom, whose coloring is almost identical to mine and who loves purple lip colors, but I first wore it when I was coming down with a cold and I'd hate to be the Typhoid Mary of lipstick. (Which reminds me, I should sterilize the tube now that I'm feeling better.) So Lilac Flush stays with me, and I'm looking forward to putting together some '60s-inspired looks for spring! Something tells me that my lavender blush will be involved...

Update, Jan. 8: Today I wore Lilac Flush all day, to get a better sense of the formula. It's extremely comfortable on my lips; I find some of the Maybelline Color Sensational lipsticks to be drying, but Lilac Flush feels more like the Vivids. Unfortunately, the wear time isn't great--about two hours with no eating--and the formula has the repulsive tendency to congeal and form gooey balls and threads on the inner part of my lips. Gross, gross, gross. I've heard of lipsticks doing that, but this is the first time I've experienced it. Pastel lipsticks are often problematic, and Lilac Flush is no exception. If you're thinking about buying this one, I'd advise you against it: there are quite a few indie lipsticks in the same color, with what appear to be better formulas.
Posted by auxiliary beauty at 12:54 PM