Milani Moisture Matte Lipstick in Matte Naked, or How I Became a Vampire

But first, how my local CVS crushed my lipstick-collecting dreams for the 837th time.

I was lying in bed a few nights ago, lamenting the state of my skin, when it hit me that I'd had my current tube of concealer for almost two years. Suddenly it all made sense. How could my complexion clear up if I kept applying two-year-old concealer to my blemishes? I also realized that I couldn't remember when I'd bought my tube of mascara. July? August? Maybe that explained why it had stopped working.

The next day, when I popped into CVS to replace my concealer and mascara, I noticed that they were having a 2-for-3 deal on almost all makeup. Perfect! A chance to get Revlon Matte Balm in Unapologetic, a neon coral I'd been vacillating over for almost a year. But the two tubes of Unapologetic in stock had been opened and smeared on someone's hand, and the same turned out to be true of the two Lacquer Balms I'd been considering buying eventually, and there was nothing else I actively wanted. This pissed me off. Civic responsibility, people! The impulse that makes some people swatch and ruin a lipstick without buying it is the same impulse that makes them refuse to shovel in front of their houses after a snowstorm, forcing pedestrians to hop into traffic to avoid the iced-over sidewalk. Or the impulse that makes grocery shoppers leave a cart in the middle of the parking lot instead of wheeling it 20 feet to the nearest cart receptacle. Hobbes was right about human nature: most people will thoughtlessly follow their own self-interest, and instead of trying to change them, we should adjust our expectations accordingly.

Which, for me, meant adjusting my lipstick desires. I was going to buy the concealer and mascara anyway, so I couldn't just turn down the offer of a free third item. I wandered to the back of the beauty aisle and noticed a display of the new Milani matte lipsticks: a surprise, as this particular CVS usually takes several months to stock new releases. 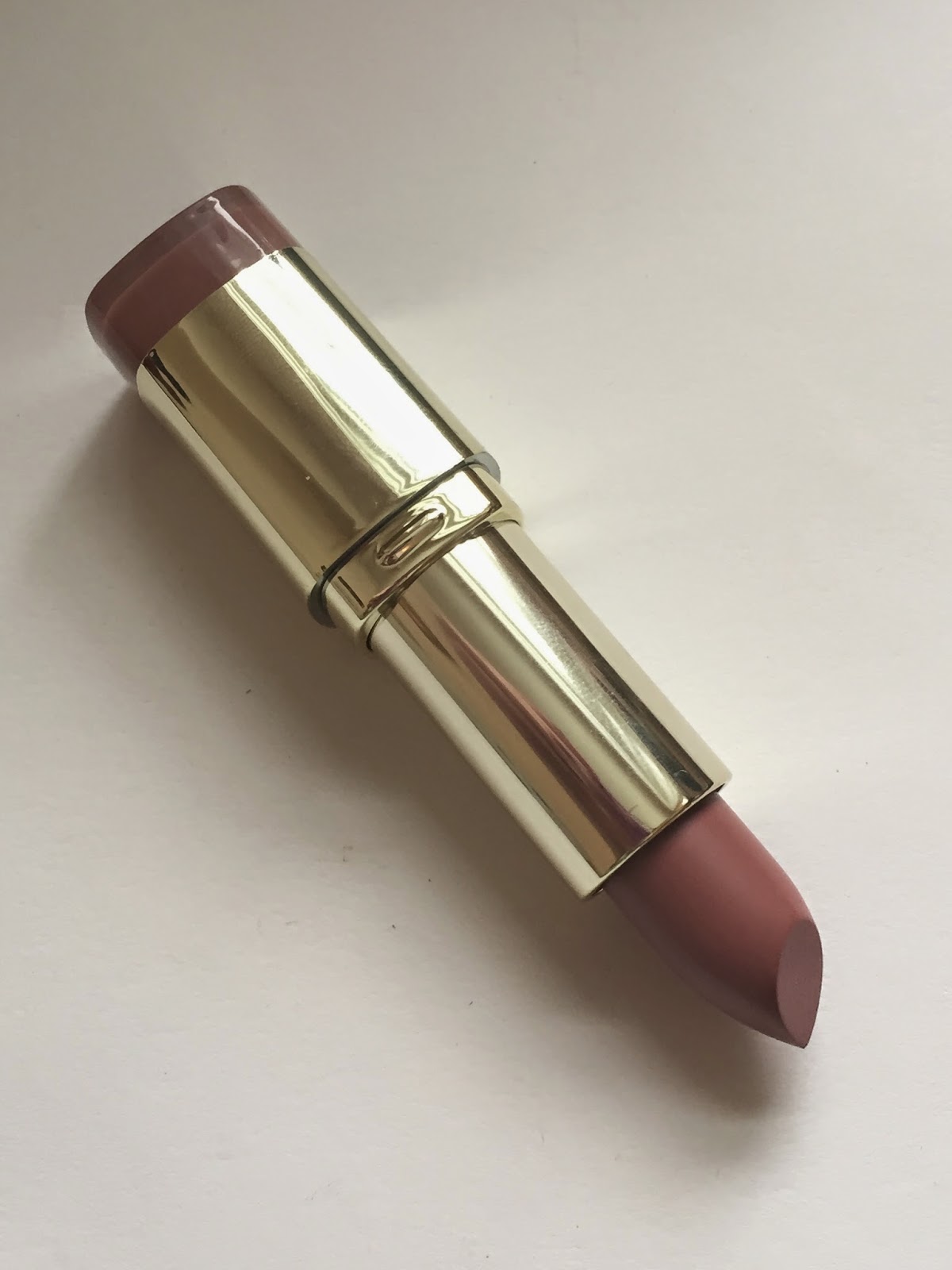 Longtime readers of this blog will be familiar with my ambivalence about Milani. It's one of only three cruelty-free brands stocked by my local CVS (the others being NYC and Physicians Formula, neither of which appeals to me), so I've tried my hardest to like its products. Unfortunately, few of them have impressed me. The Color Statement lipsticks dry out my lips and reek of synthetic watermelon, the Lip Intense Liquid Color lipsticks never quite set on the lips, and the Bella Eyes eyeshadow singles are coarser and more powdery than I'd like. Samuel Johnson described second marriages as "the triumph of hope over experience," and my purchase of Milani's matte lipstick in Matte Naked was a similar triumph. Except that it was a fourth marriage, and unlike many fourth marriages, it turned out for the best. 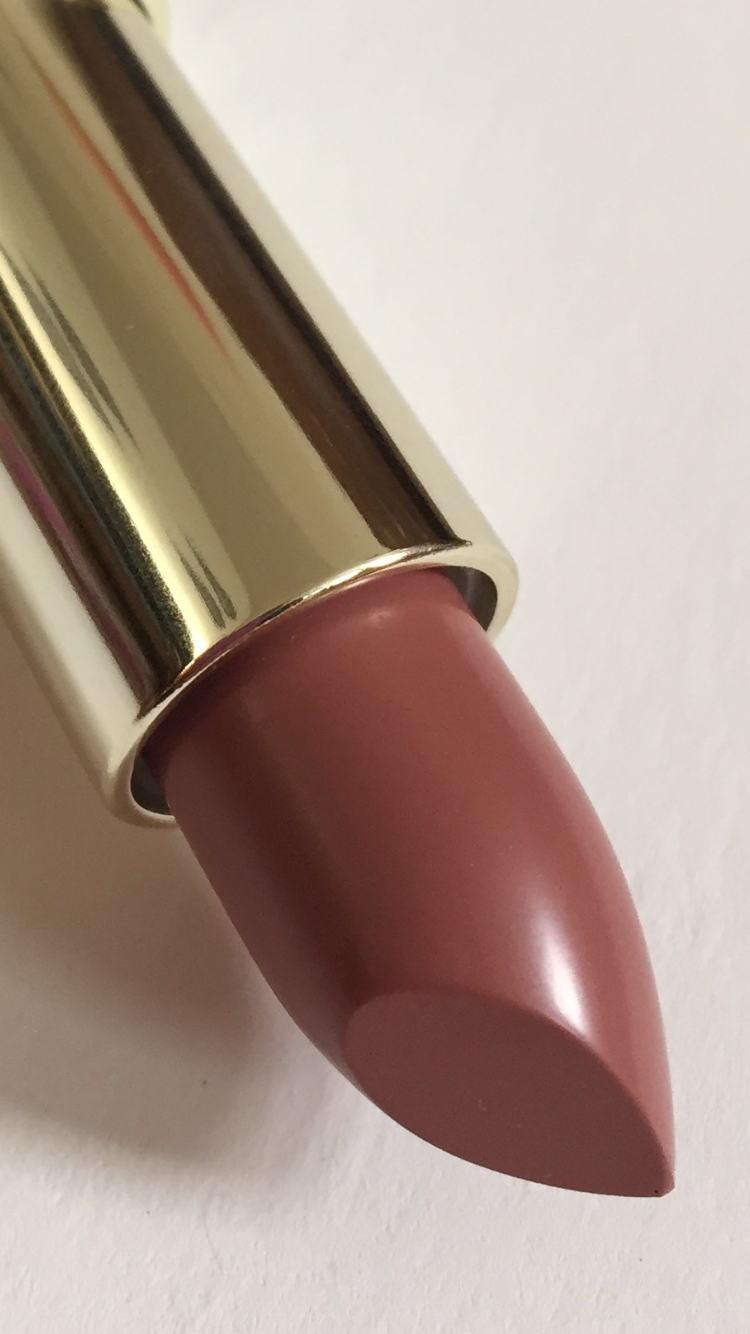 Matte Naked is part of Milani's eight-shade range of Moisture Matte lipstick. You may wonder why Milani has released a new matte formula when its regular Color Statement line already has several matte shades (one of which I've reviewed). I see this as Milani's tacit admission that its original matte formula needed some serious revamping. They certainly seem excited about the new formula, if the blurb on their website is any indication:

"Meet your matte. Your fantasy matte. The matte that not only feels great (yes, you read that right – it’s actually comfy) but also lasts for hours and has 'a-mazing Instagram selfie' written all over it. Infused with grape seed extract imported from Italy, this smear-proof lip soother delivers mega color that won’t budge, even after a close encounter with a cappuccino cup. In eight luxe, go-the-distance shades, from the oh-so-sweet, pale pink Matte Innocence to the va va voom, fiery-red Matte Passion. This matte? So major."

Oh, geez. They've been taking copywriting lessons from the folks at ColourPop. But let's grit our teeth, try to ignore the phrase "a-mazing Instagram selfie," and analyze these claims one at a time: 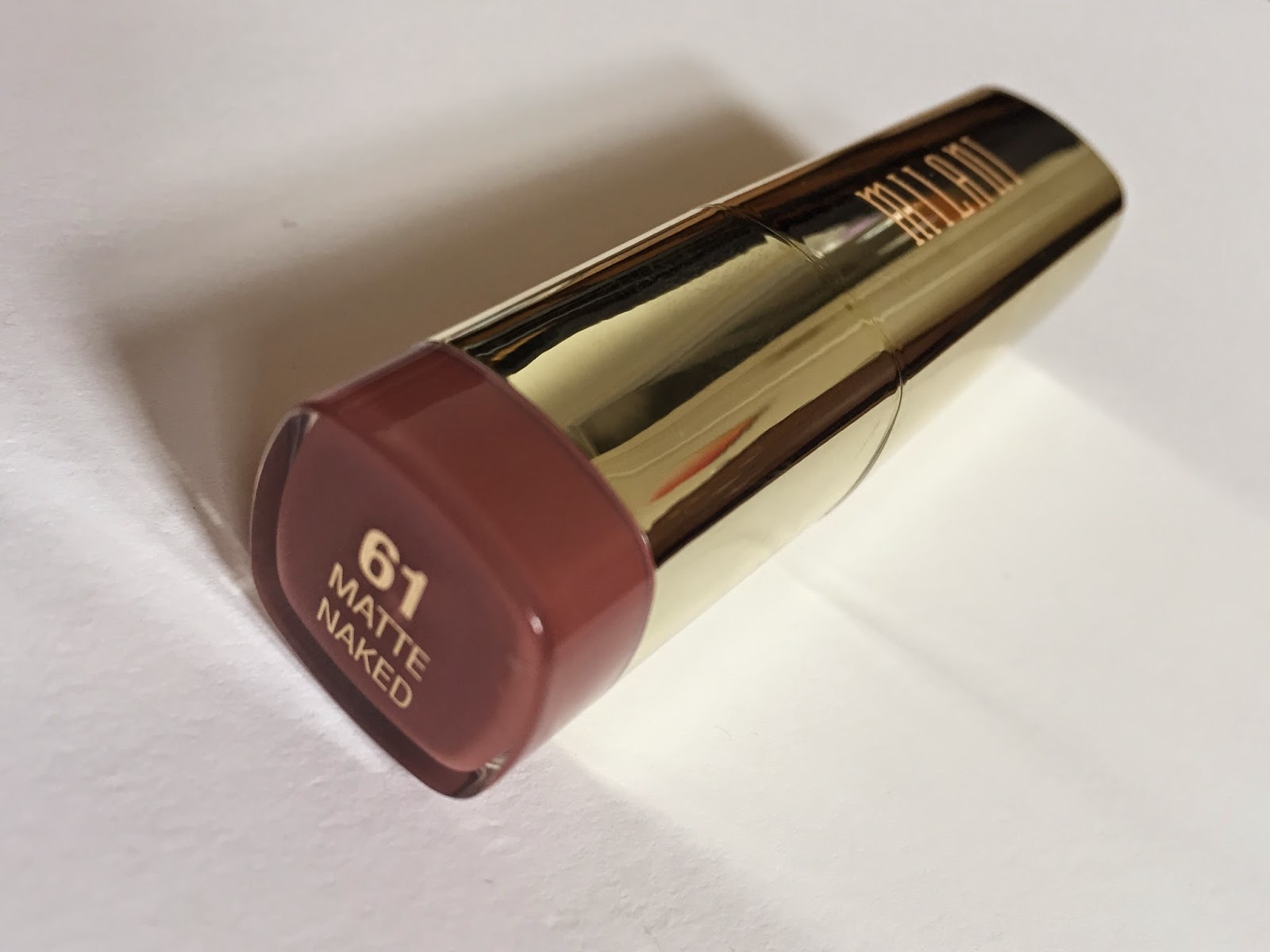 Matte Naked is a deep pinkish brown, the sort of color you'd reach for if you wanted #kyliejennerlips (damn it, that writing style has infected me, too). I chose it because, while I already had a few nudes and MLBBs, I had none in a matte formula. Matte Naked might be a nice "concealer nude" for someone with a deeper skintone than mine; on me, it definitely falls on the MLBB side of the neutral-lip spectrum. 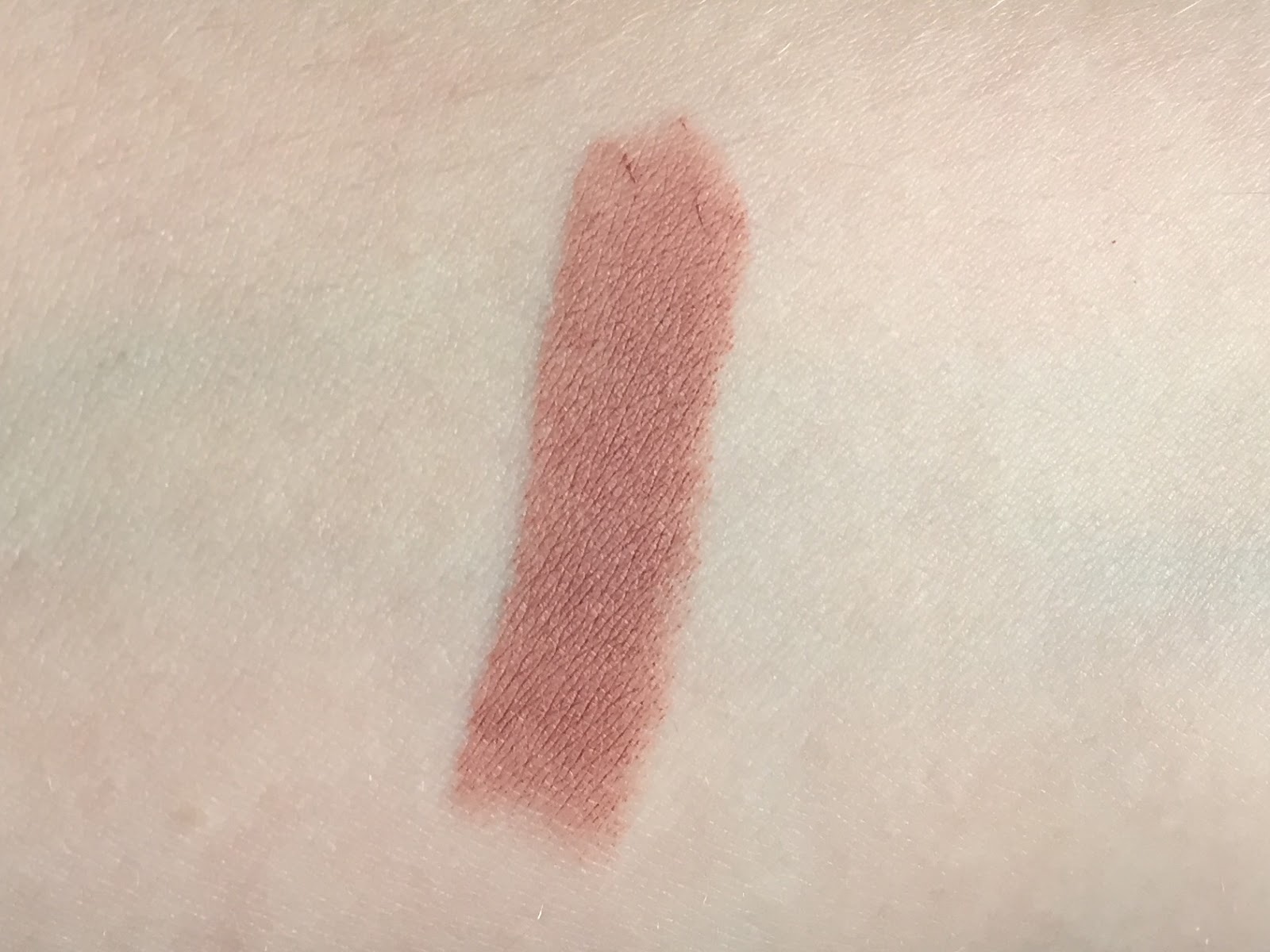 I swatched Matte Naked with some of my other nudes and MLBBs: left to right, Revlon Pink Truffle, Matte Naked, Maybelline Nude Lust, and L'Oreal Fairest Nude. 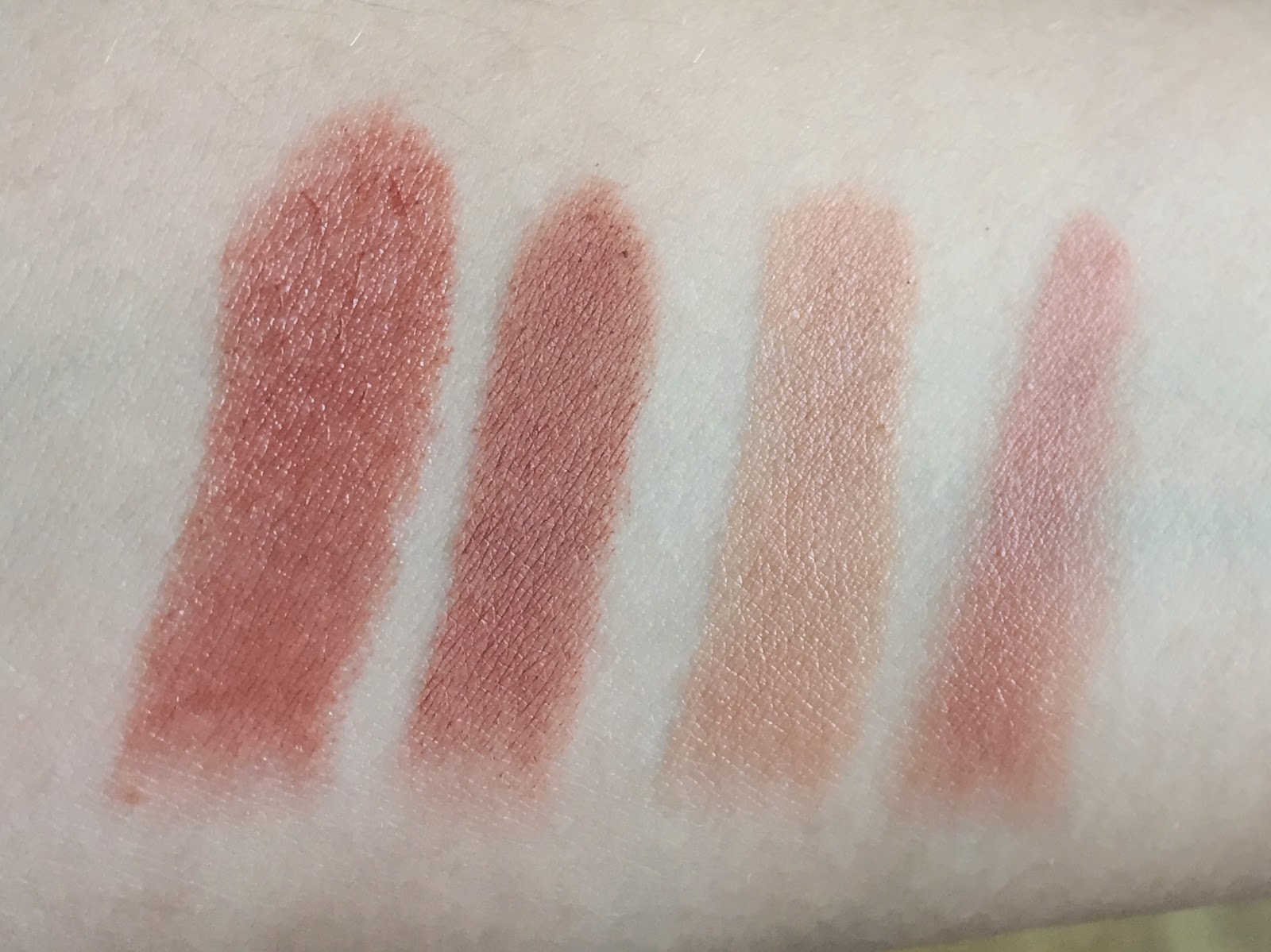 Matte Naked is darker and cooler than Pink Truffle, and much darker and browner than beige Nude Lust or mauvey Fairest Nude. (Incidentally, Fairest Nude is my holy grail nude lip color, but I hate the smell and feel of the L'Oreal formula. If anyone can recommend a similar cool-toned nude in another formula, I'll be forever in your debt.)

I was dismayed to see a hint of peach in my arm swatch, but Matte Naked became cooler-toned on my lips: 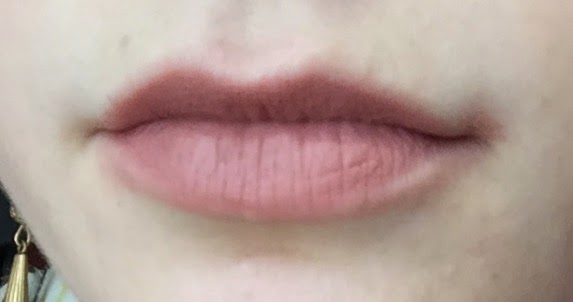 In recent weeks, I've been experimenting more with my eye makeup, which has given me a new appreciation for the nude and neutral lipsticks I tend to neglect. Here are two looks I put together with Matte Naked, both of which I felt comfortable wearing in academic situations. In the first look, I'm wearing NYX Jumbo Pencil in Iced Mocha and ColourPop Super Shock Shadow in Bae on my eyes, and Sleek Flushed on my cheeks. 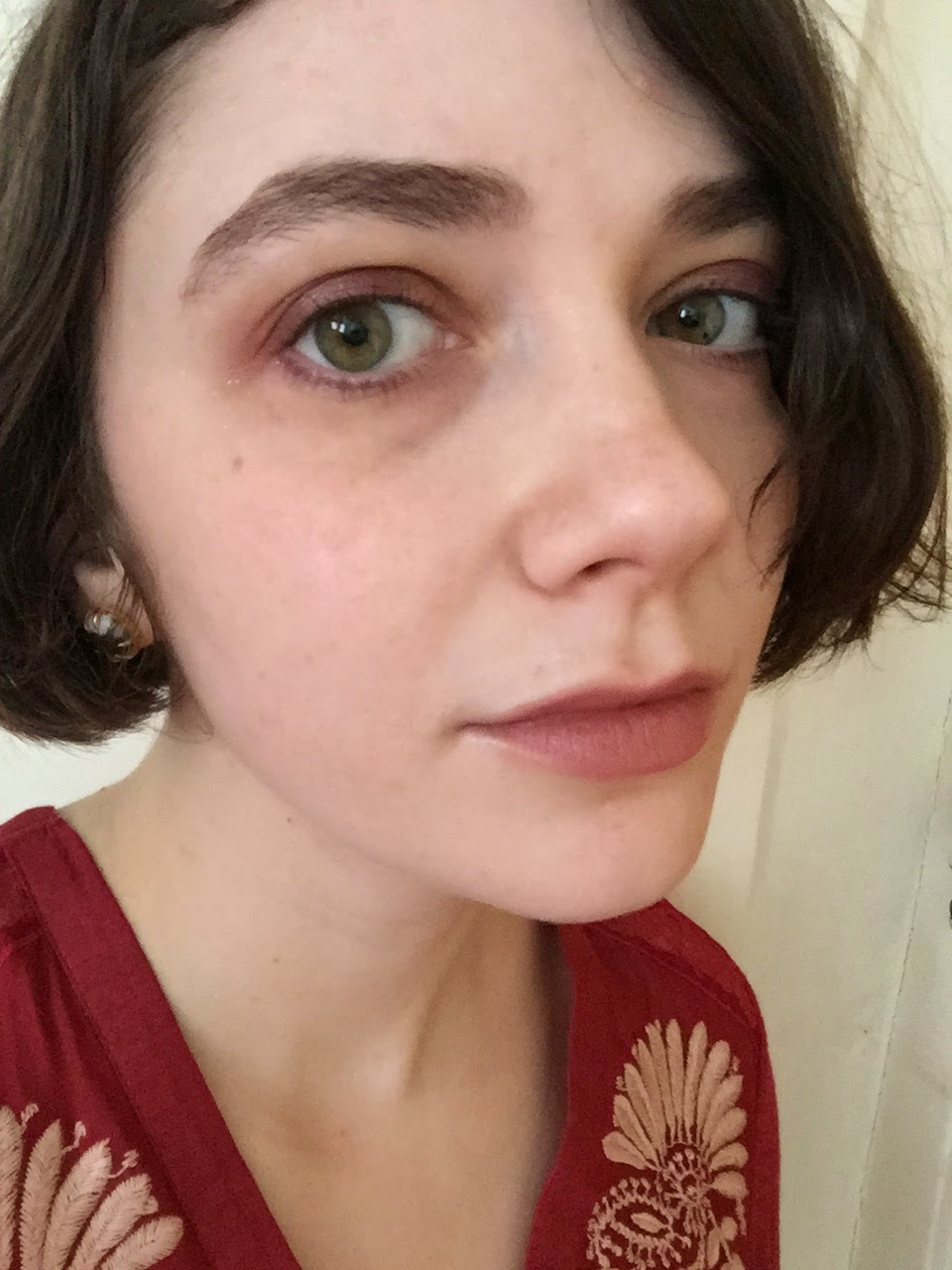 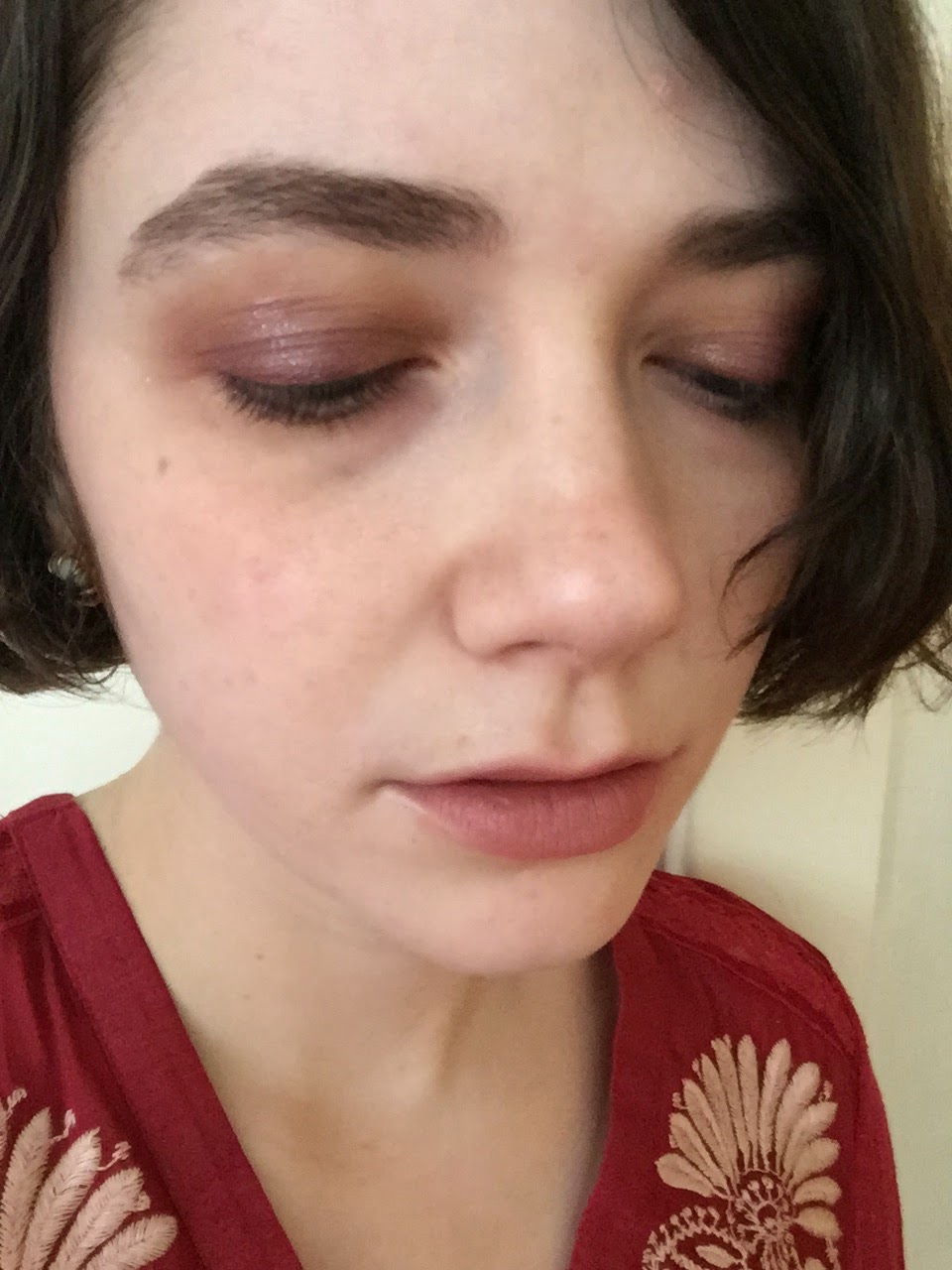 I did have a good deal of glitter fallout with Bae, so I might try using a primer next time. And I'll certainly never use it on my lower lashline again, unless I want to look like I've been making out with Ziggy Stardust-era David Bowie.

My second look was more understated: ColourPop Bill and the plum half of NARS Habanera on my eyes, and Illamasqua Zygomatic on my cheeks. 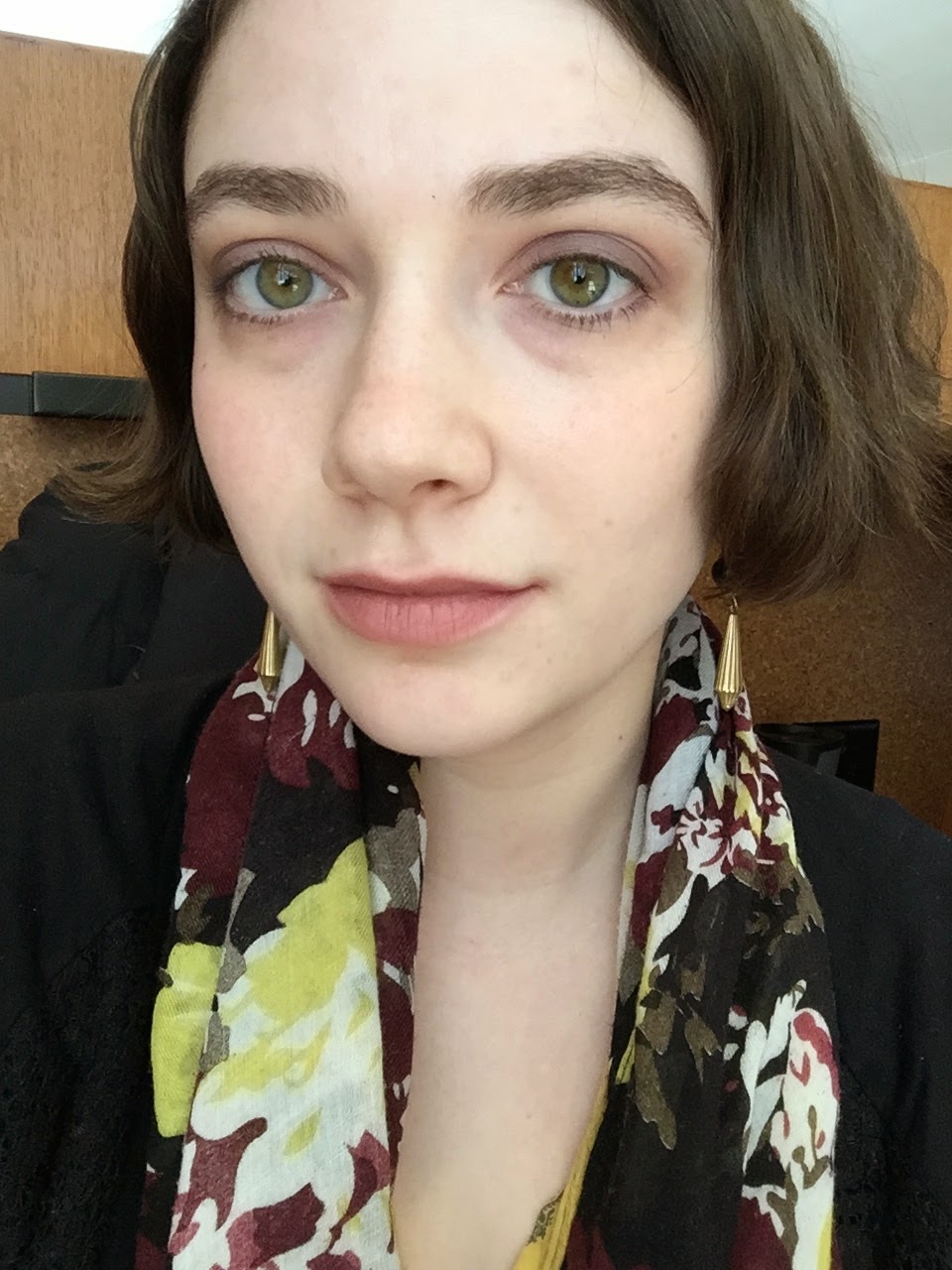 Bill is so great, you guys. I love neutral-with-a-twist shadows, and this soft matte lilac-taupe applies and blends flawlessly and stays put all day without primer. If you're going to order one thing from ColourPop, order Bill. 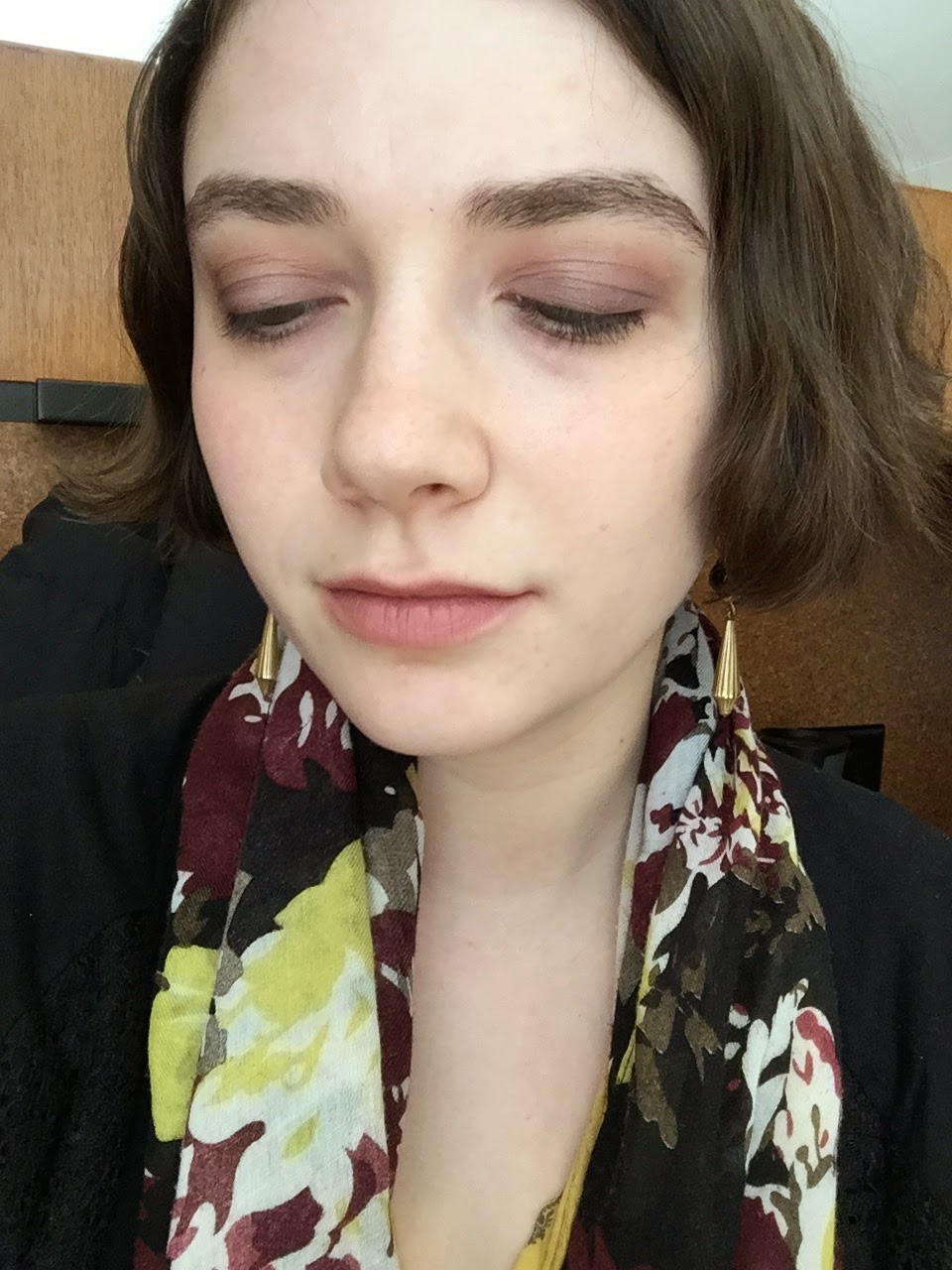 Oh, wait: I was going to tell you how I became a vampire. On the day I wore the first Matte Naked look, I went to the bathroom just before a department event and found a smear of dried blood on my neck. Further inspection revealed two tiny, close-together cuts resembling a vampire bite. I had to run into the department office, clutching a paper towel to my neck, and ask for a bandaid. I even looked vampiric, with my reddish eyeshadow and washed-out lips. It was a very strange day.

Anyway, I guess I'm immortal now, which means I'll live to see many formulas of matte lipstick rise and fall. Have you tried Milani's?
Posted by auxiliary beauty at 1:30 PM