The Audacity of Angela

Well, I finally did it. Almost half a year after NARS released the new Audacious Lipstick formula in 40 shades, I decided on one. 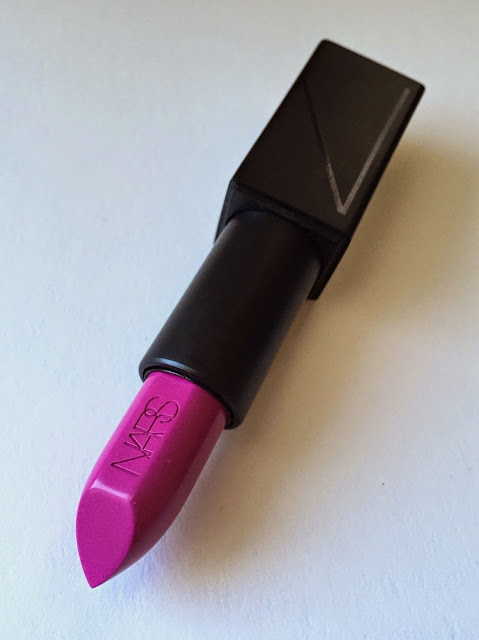 Meet Angela, described by NARS as a "pink orchid." Angela wasn't the first Audacious lipstick, or even the fifth or sixth, to catch my eye; but all that matters is that we're together now. The color is perfectly poised between pink and purple, and it's bright and happy without veering into unnatural fluorescence. How did they do it? I wish I knew. It's that NARS color magic, the same magic that makes the perfect eyeshadow duo out of plum and mint.

When photos and reviews of the Audacious range began appearing online last August, I knew I'd have to buy one eventually. But, aware that the lipsticks were permanent, I told myself that I mustn't be rash. They were $32 each, a $5 increase from NARS' usual (and, for my budget, already steep) price for lipsticks, which meant that careful deliberation was required. I wanted a color that was bold and distinctive enough to deserve the "audacious" epithet, but wearable enough that it wouldn't languish untouched on my shelf.

The first shade to tempt me was Audrey, which several bloggers described as a muted berry red (NARS' own description is "red currant"). When I tried it on, though, it looked far more purple on my lips than it had online. 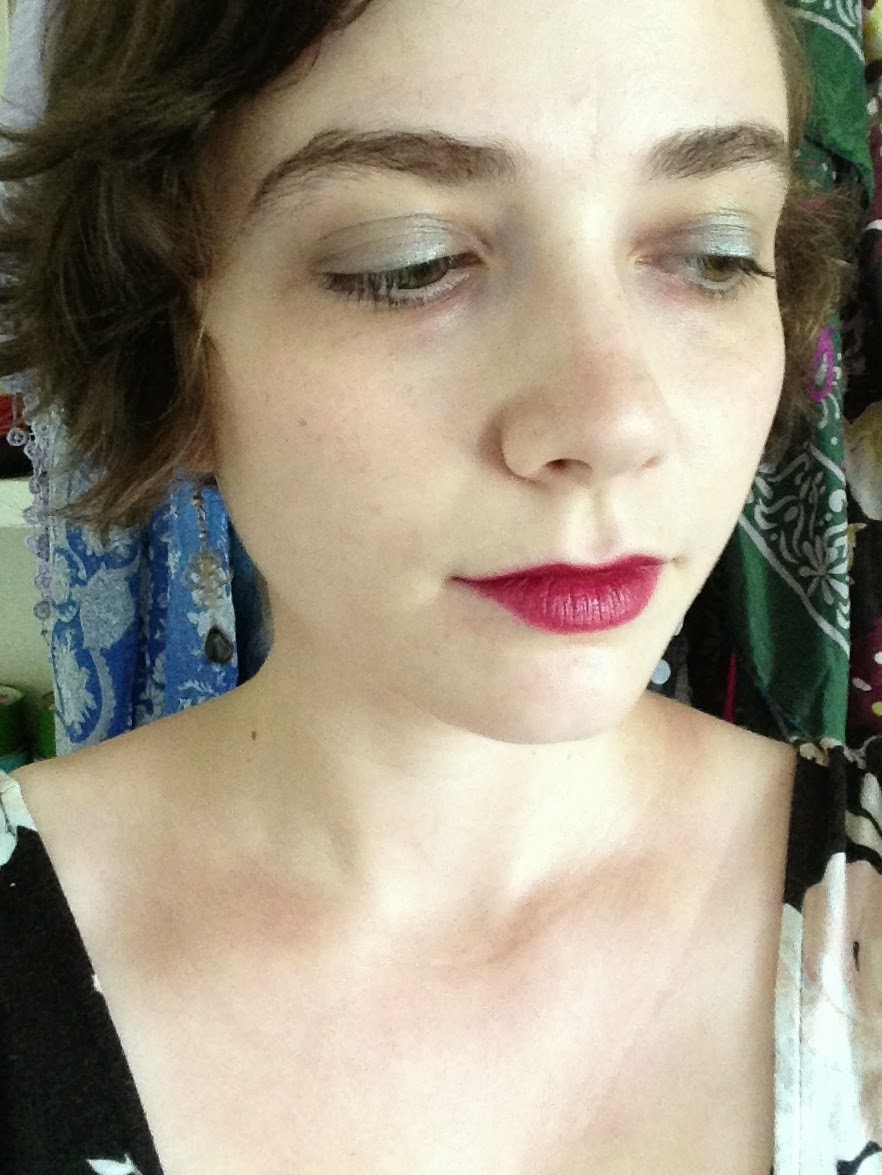 This threw me off. I'd been almost positive that I would end up with Audrey, but now I didn't know what I wanted. 40 lipsticks is a lot. Too many, one might even say. There seemed to be a dozen variations on orange-red alone. I made lists, I spent hours looking at swatches, I even went to see the lipsticks in person--and yet I remained paralyzed with indecision for the next few months. Eventually, though, I worked out a process of elimination. If you want to follow along with my neurotic waffling, Café Makeup has swatched all 40 lipsticks here, in alphabetical order. I haven't seen any other blogger arrange her Audacious swatches alphabetically, but I love it. Everything should be in alphabetical order. It feels so right.

Anyway, here was my thinking:
All this subtraction, which took many more late-night Google sessions than I'm willing to own up to, left me with a shortlist of seven: Angela, bright purple-pink; Anna, dusty mauve-pink; Fanny, bright berry-fuchsia; Grace, deep coral-pink; Greta, hot pink a hair too cool to be coral; Janet, similar to Fanny, but lighter and brighter with subtle shimmer; and Natalie, medium coral-pink. In retrospect, I should have tried them on all in one go; but my lips hate it when I put on too many lipsticks in a row, and the SAs of your average Sephora don't take kindly to it either.

Back home in San Francisco, I began my testing odyssey with the elegant, understated Anna. My mother, who hates pale, nude, and neutral lipsticks on me, vetoed it immediately, saying that it made me look "washed out" (never mind that I had a cold at the time, which surely contributed to my pallor). I didn't entirely agree with her, but I couldn't help feeling a little less enthusiastic about Anna. I did manage to get a photo before I took it off: 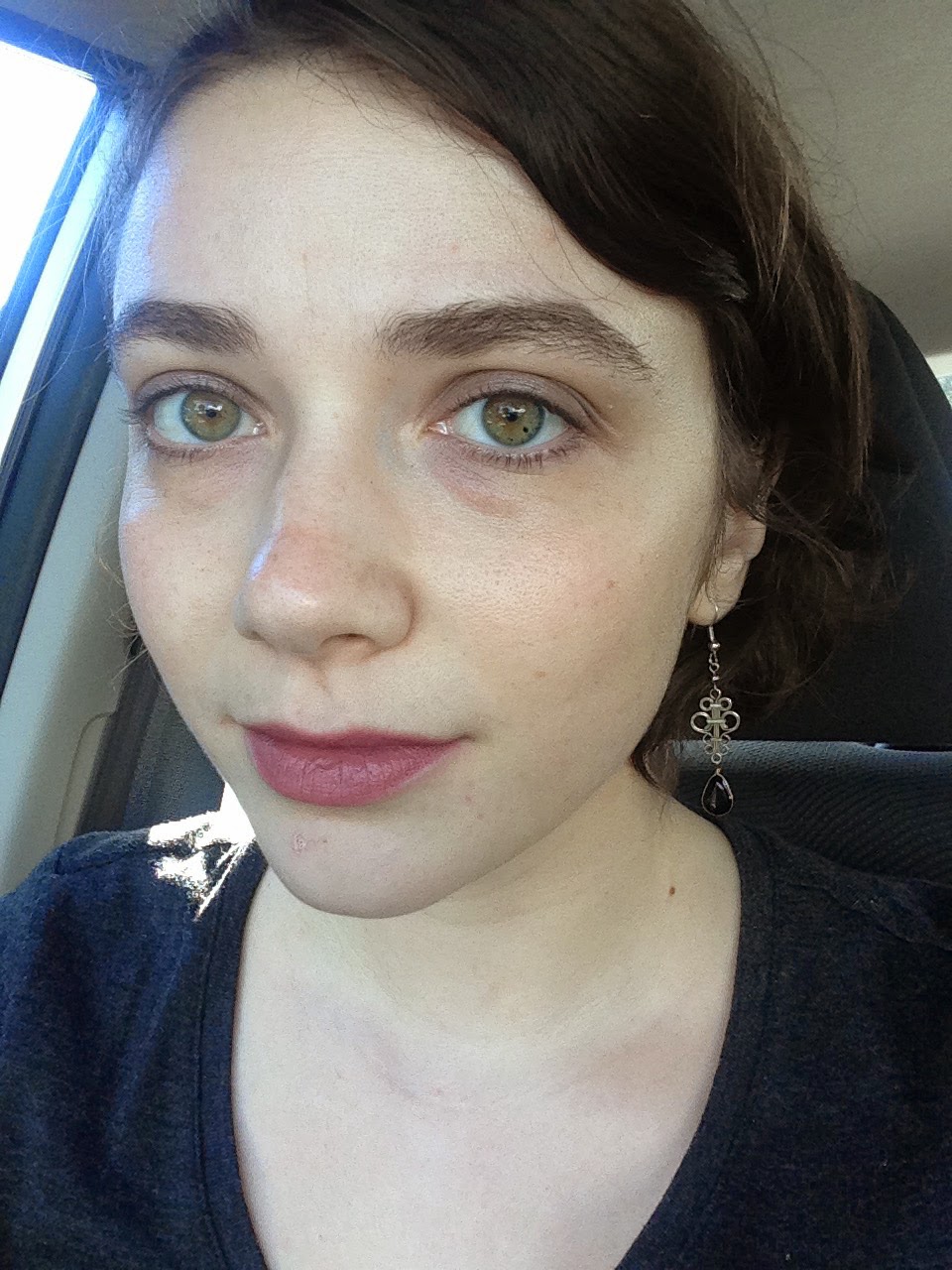 In January, within the space of a week, two different bloggers drew my attention to Angela. The first was Kate of More Like Space, who described Angela as "a neon pink tamped down by a more muted violet." (If you're interested, Kate also provides an enlightening biography of the lipstick's namesake, Angela Lansbury.) The second blogger was Sunny of Mostly Sunny, through the first post in her #TulipTuesday series. This was more indirect: Sunny didn't review or even mention Angela, but she photographed a handful of makeup products that evoked a bouquet of magenta tulips. The flowers she had chosen reminded me of one of my favorite nail polishes, OPI Ate Berries in the Canaries, and it struck me that I didn't have a lipstick in that shade. I had fuchsias and purples, but nothing in between: what a shocking omission! 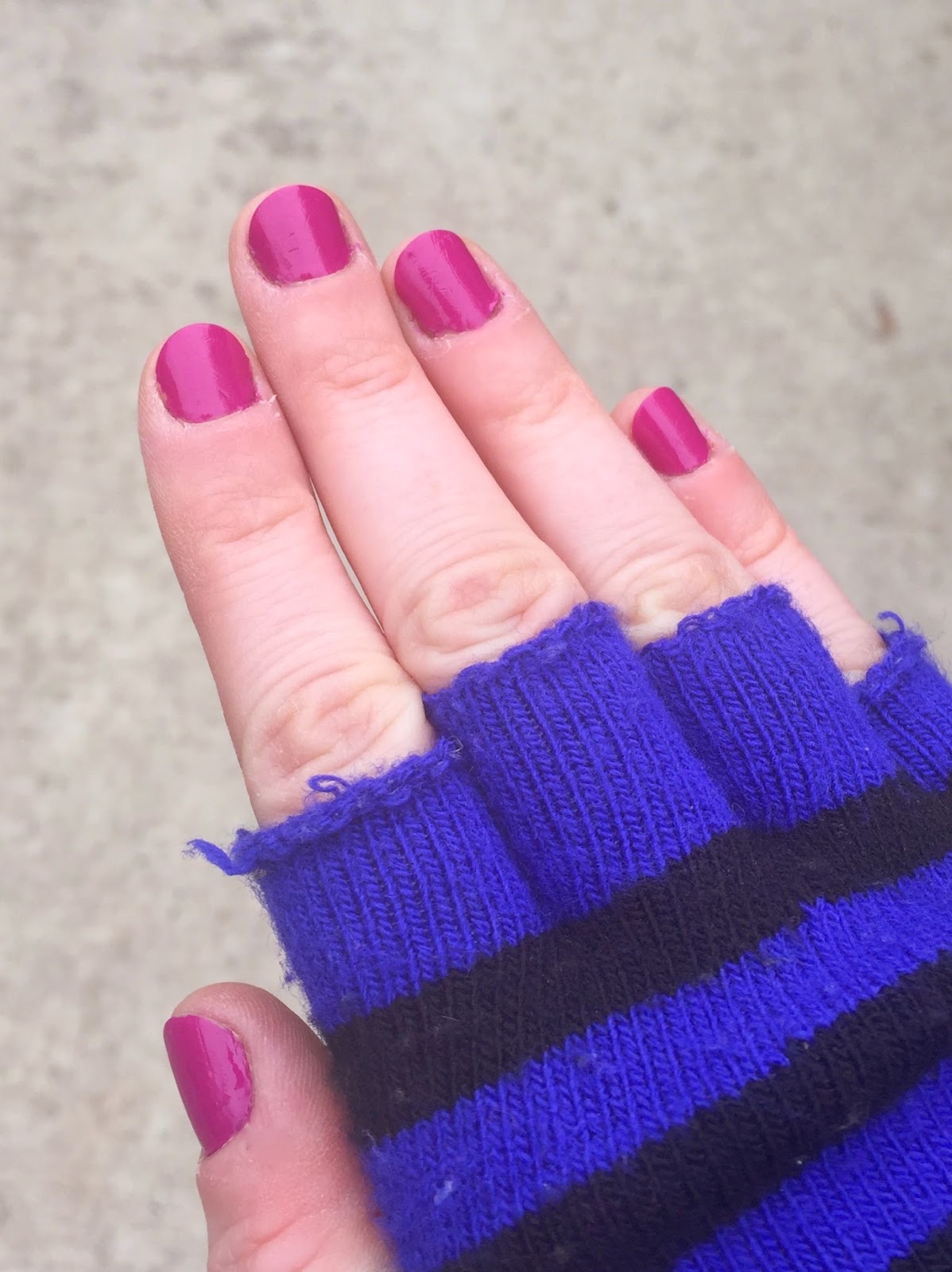 In the Audacious range, the lipsticks that seemed most likely to match Ate Berries were Angela, Silvia, Fanny, and Janet. Silvia was a NARS/Barneys exclusive (and looked very similar to Maybelline Brazen Berry, which I already owned), while Janet and Fanny were a little too red. That left Angela.

I tried it on and was surprised at how wearable it was, but I didn't want to be too hasty. With spring approaching and my treasury of corals understocked, I spent some time mulling over the more summery colors on my shortlist: Grace, Greta, and Natalie. The most appealing of the three was Grace, so I tried that one, too. I liked it, but I wasn't sure it liked me. My cool undertones seemed to be struggling against the sudden onslaught of coral. I remembered how forgiving Angela had been to my coloring, and my mind was made up.


Angela it was, then. I was already in a treat-yourself mood, having just received some positive academic news. Plus, it turned out that I didn't have to pay full price for Angela, since my mom happened to have some credit at Nordstrom (ironically, from a lipstick that I'd bought her and she'd returned). This meant that I paid only $17 instead of $32 and could afford to buy one of my grad-school friends a MAC lipstick for a Christmas/housewarming/New Year's/thanks-for-the-homemade-limoncello present.

I placed my order, a week passed, Angela arrived, and my hands trembled a little as I opened the box... 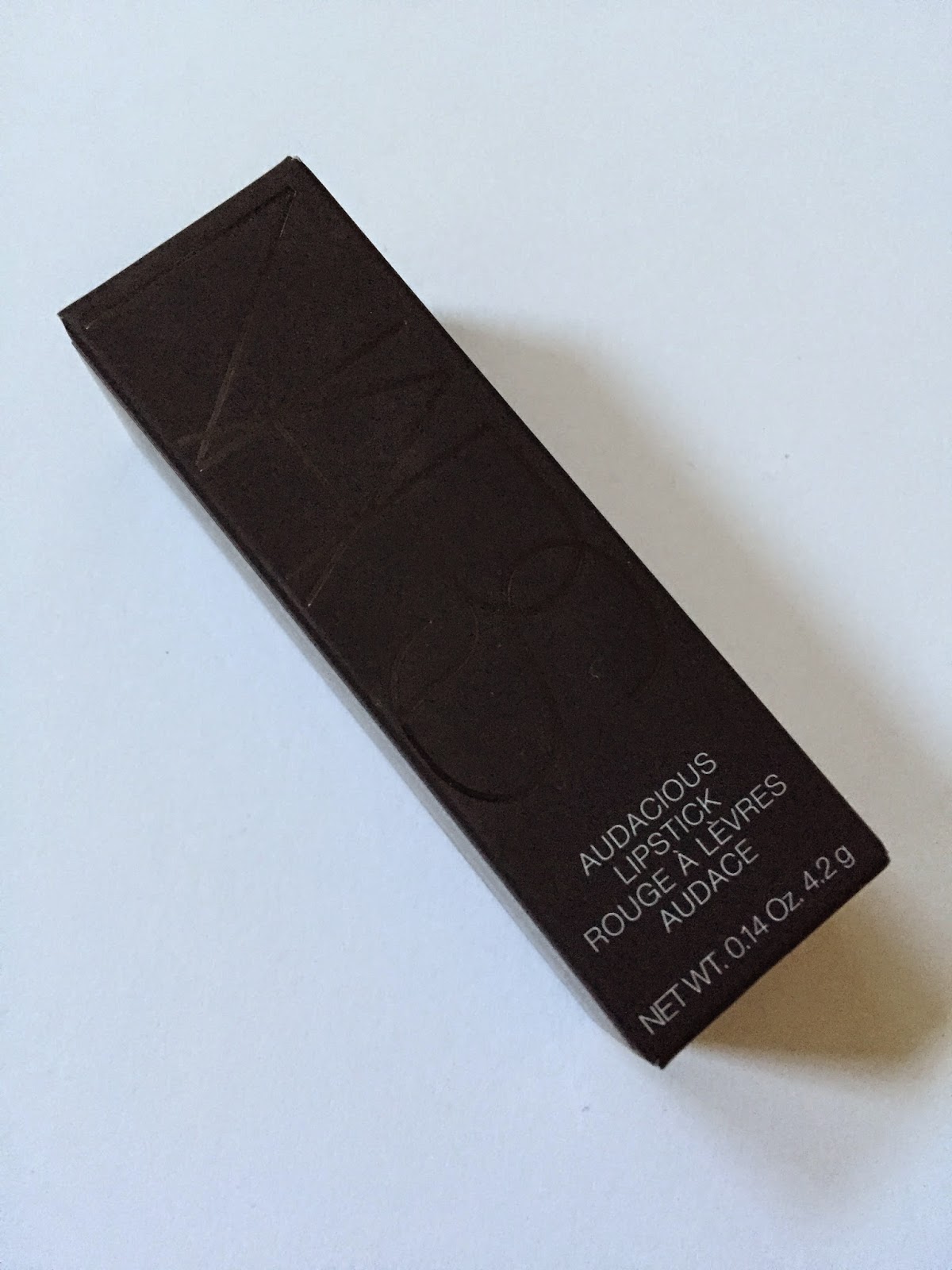 The tube is hefty and metallic, delightfully cool to the touch, and significantly larger than NARS' regular lipstick offerings. 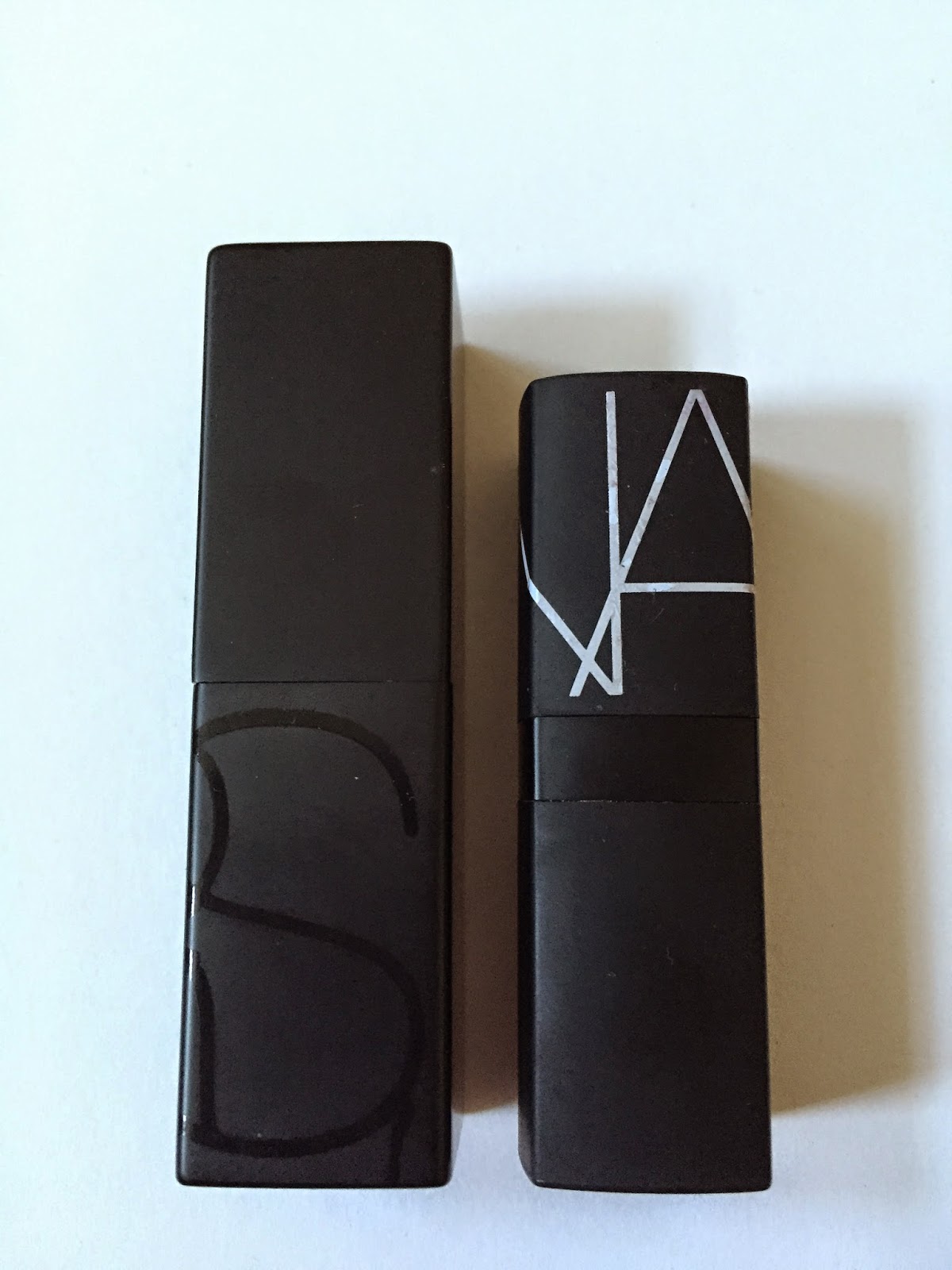 It has a magnetized lid, which brings me a great deal of childlike pleasure. I can drop the lid onto the tube and, if it's facing the wrong way, it will spin 90 degrees before clicking into place. That alone is worth the extra $5. Since the tube is so imposing, it makes the lipstick look oddly small in comparison, but the Audacious lipsticks are in fact larger than the regular NARS lipsticks: 4.2 grams as opposed to 3.4.

Almost every good thing you've heard about the formula is true: Angela is completely opaque in one swipe, yet it doesn't feel thick, heavy, or slippery. But it is drying after a few hours. If you've read this blog for any length of time, you'll know that I have especially dry lips, and have amassed a collection of lipsticks that mask and cushion the flaky bits. Angela looks great when it's first applied, but by the end of the day my lips are peeling, as if desperate to rid themselves of any trace of lipstick. This happens even if I wear Angela over balm, and the drying effect lasts a couple of days. Not many reviewers seem to find the Audacious formula uncomfortable, but if your lips are dry or sensitive, I'd advise you to proceed with caution.

Another word of warning: if you often find that lipsticks feather on your lips, you might want to wear Angela over a liner, since it's so soft and pigmented. It lasts about four hours with drinking but no eating, and the shine wears off quickly, leaving a semi-matte finish. Angela doesn't withstand a meal (which is fine with me, since I like to remove my lipstick before eating), but it does fade to a bright fuchsia stain, and at the end of the day I have to remove the stain with a washcloth. Here's Angela freshly applied: 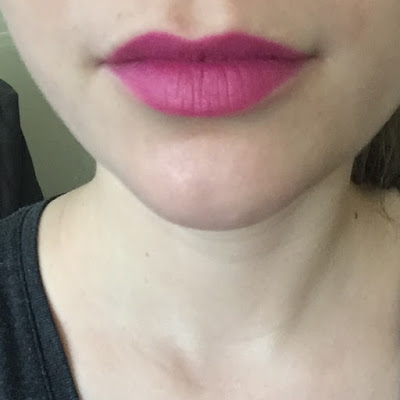 How to describe the color? It's a little too purple to be a proper fuchsia, but it's not a true violet, either. "Magenta" might be the best word for the color. It's a very '80s color, which I appreciate. 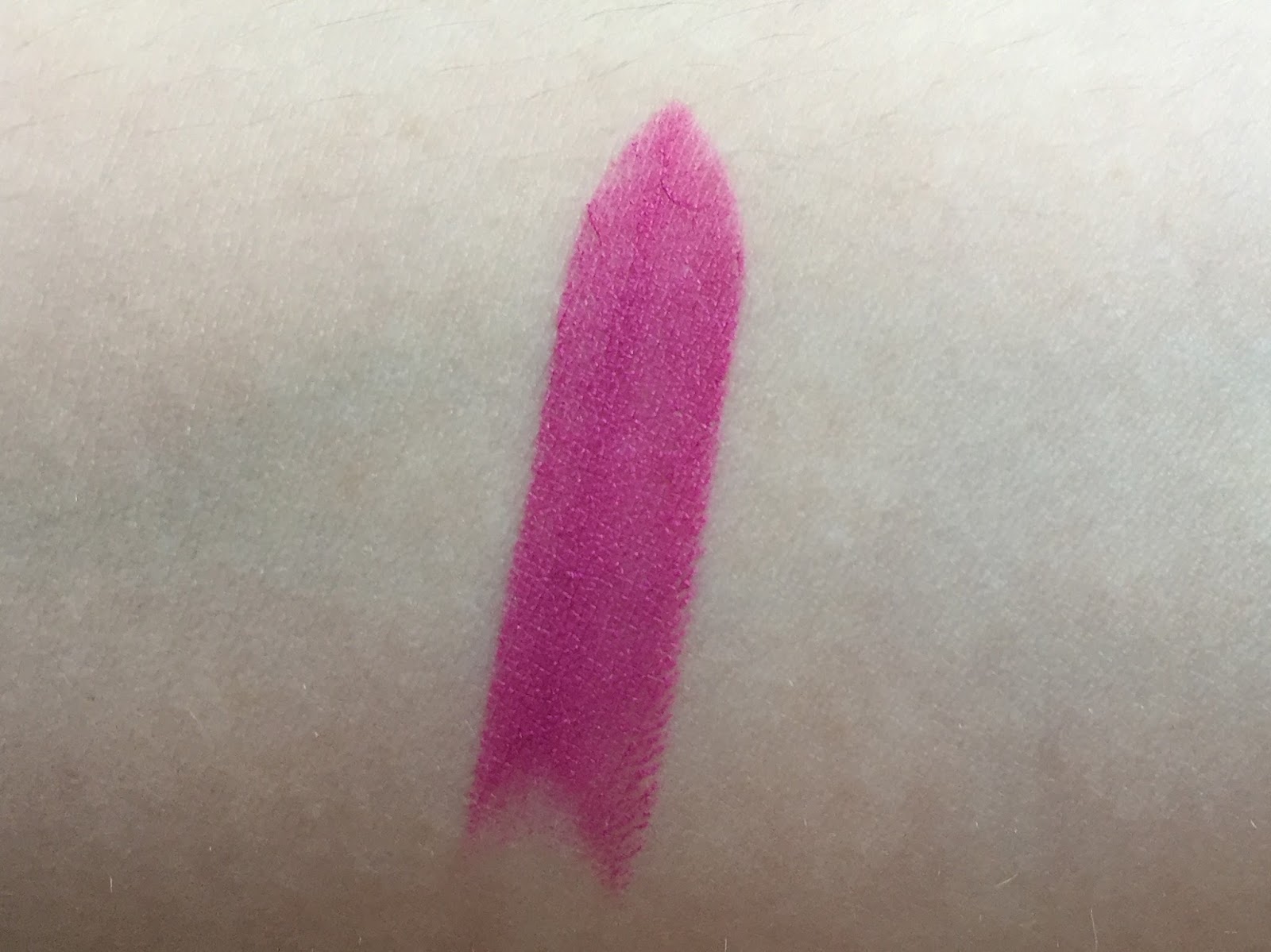 I was relieved to find that I didn't have any dupes of Angela. Revlon Fuchsia is redder, Maybelline Brazen Berry is bluer and sheerer, and MAC Up the Amp is bluer and grayer.


In the tube, Angela looks like a challenging color to pull off. But I find that the punch of violet somehow makes it more wearable, at least on me. If the cosmetic gods had designed a lipstick to be as flattering to my coloring as possible, they might have come up with Angela. 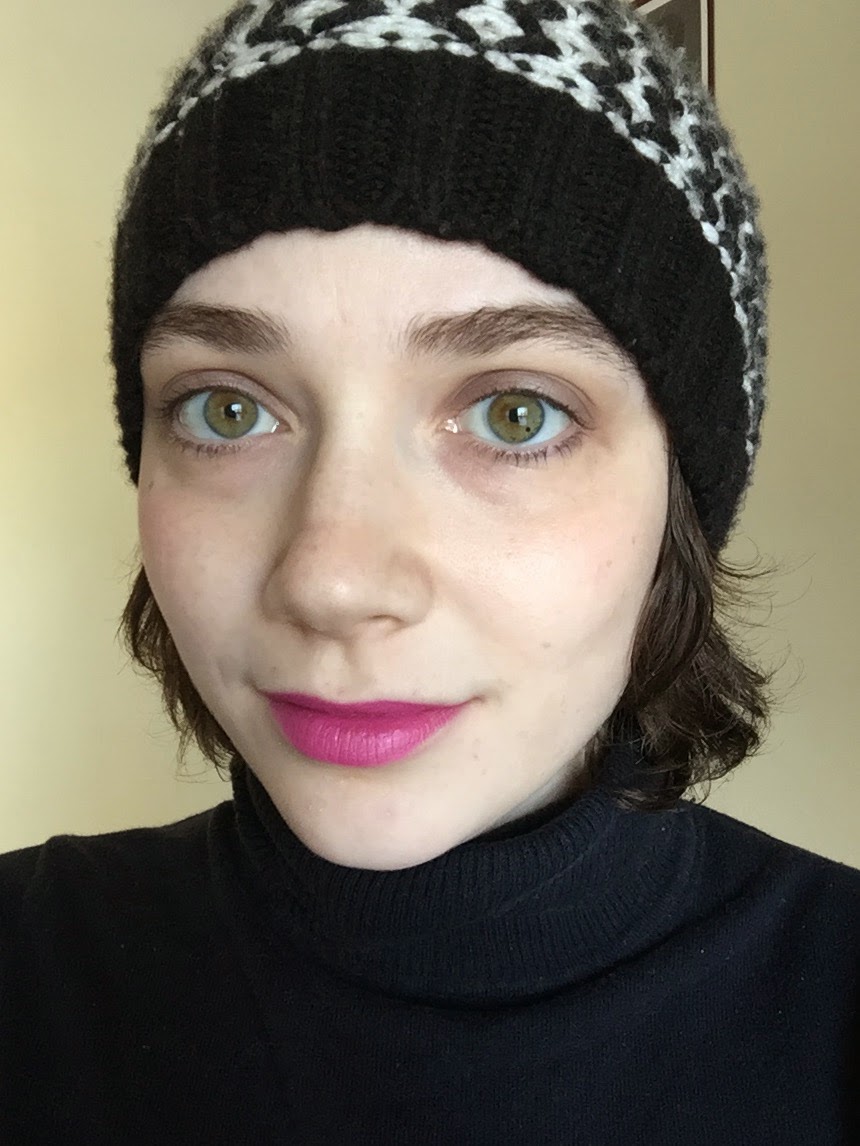 It's a great pre-spring pink, but I can't see it looking out of place in any season. And, yes, it matches Ate Berries in the Canaries exactly. Am I good or what? 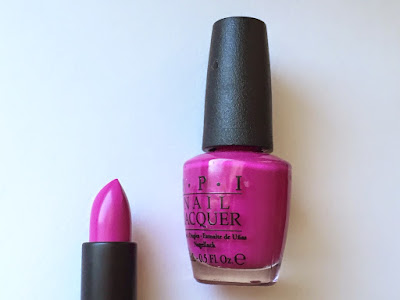 Posted by auxiliary beauty at 10:03 PM