FOTDs: My Makeup Is So Boring, Guys

As a beauty blogger, I often feel that I should be experimenting constantly with makeup, and that wearing the same lipstick two days in a row is tantamount to a creative slump, especially if that lipstick is a neutral shade. Since buying Milani's Matte Naked lipstick, I've worn it almost every other day, though nude lipstick usually feels like a waste of facial real estate. At first I justified my Matte Naked rut by telling myself that it would give me more leeway to experiment with eye makeup, but I ended up wearing the same neutral eyeshadows in roughly the same configurations as before. Then I told myself that my simple eye looks would inspire me to wear bold lipstick or gloss, but that didn't happen either. Finally, I was forced to conclude that my face was just going to be boring for a while.

Basically, I've hit a period of late-winter aesthetic fatigue. It takes so long to suit up before going outside that I don't feel like spending fifteen extra minutes playing with makeup. I'm tired of my fall/winter colors, but the house-sized snowbanks all over town don't put me in the mood for my springy pastels. And sometimes I just want to take a break from creating Looks, you know? Some weeks I'm more concerned with writing about Donne, meeting with professors, watching Derek Jarman's haunting adaptation of Marlowe's Edward II, and rekindling my longstanding crush on Jemaine Clement from Flight of the Conchords. (Did you know that he just co-wrote and -directed a mockumentary about vampires?) Some weeks I don't want to stand out visually. This was one of those weeks.

(Or maybe I'm just a hypocrite: I can't pretend that those professor meetings had nothing to do with my neutral turn. I talk a big game about challenging the academic pressures to downplay one's femininity, but at this point in my career, I don't always want to be the challenger. Is this hypocrisy? I hope not.)

Anyway, I thought I'd do a little roundup of some of the looks I've worn in the last two weeks. Here are the three products I used most frequently in that period: Matte Naked on the left, and ColourPop eyeshadows in Bae (top) and Bill. 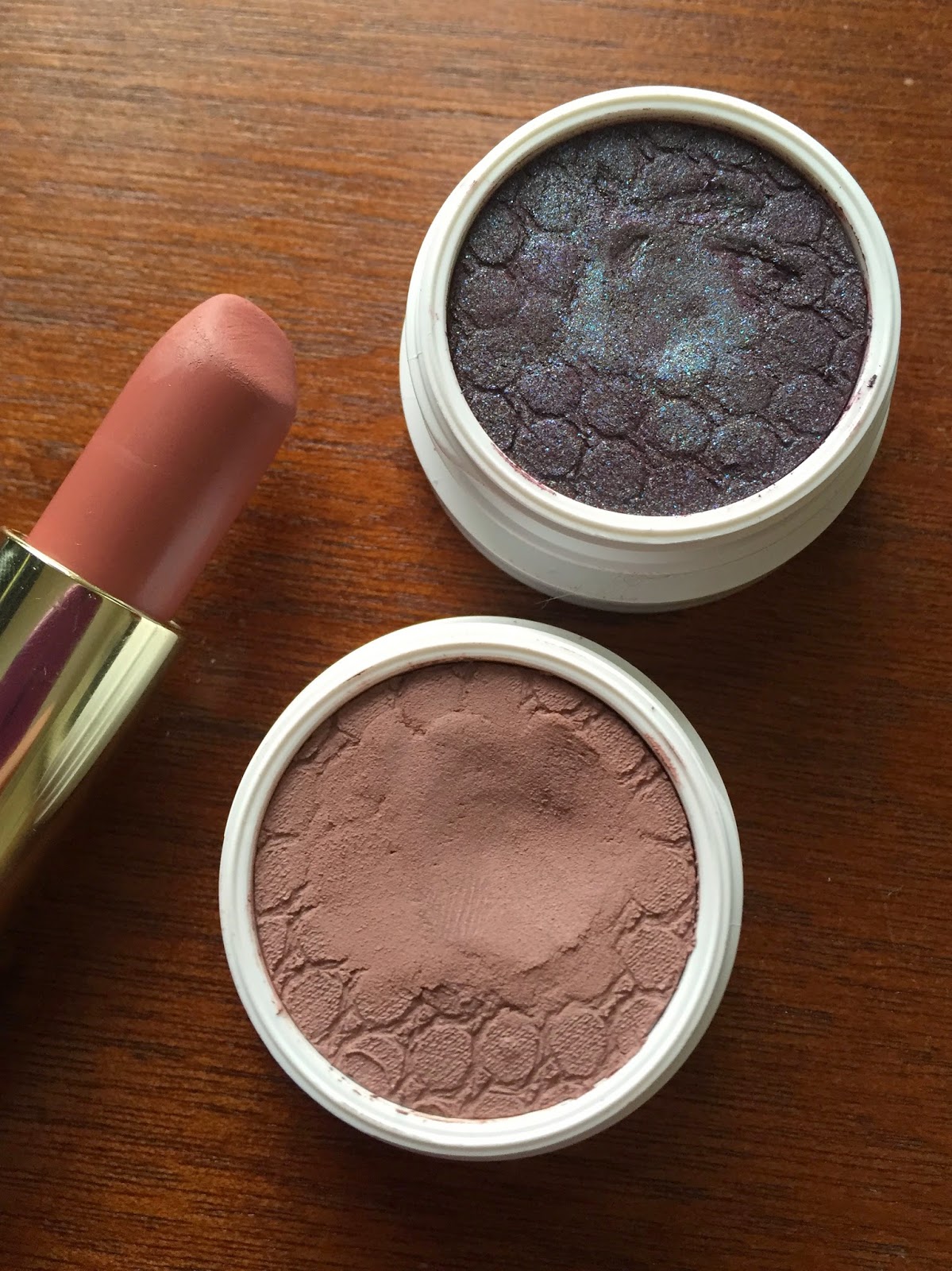 This became the basis for an all-matte look, also featuring Sleek Flushed blush and Revlon Matte Balm in Sultry. I've only recently started wearing matte eyes and lips; one of my unwritten rules used to be that a matte finish on my lips demanded shimmer or sheen on my eyes, and vice versa. But I like how this turned out, even if it was quite subdued. 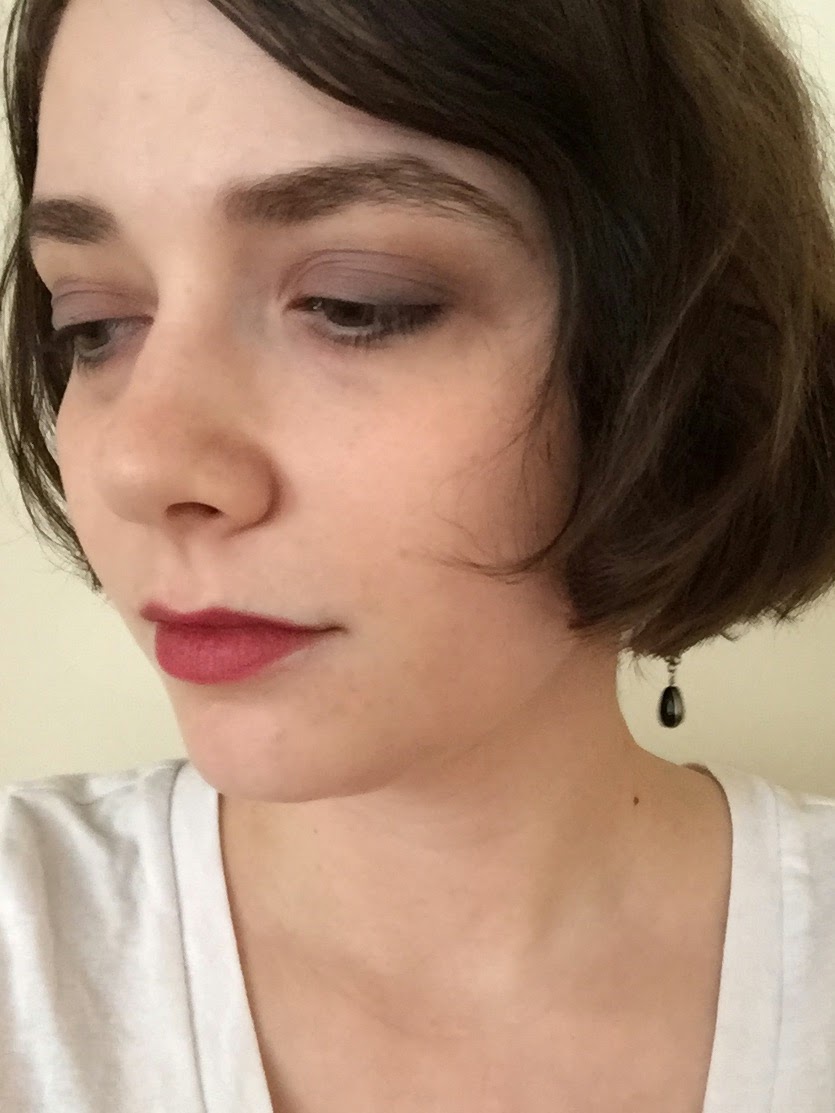 My two other ColourPop shadows, Krinkle and Sequin, have seen less use: their glitter particles are just so large. This was my first and only attempt to wear Sequin, a pinkish copper that turned very orange on my lids. I applied the plum shade of NARS Habanera all over the lids, then blended Sequin into the middle of each lid. Lipstick is Matte Naked; blush is probably Flushed again. The photo is a bit washed out, but you get the idea. 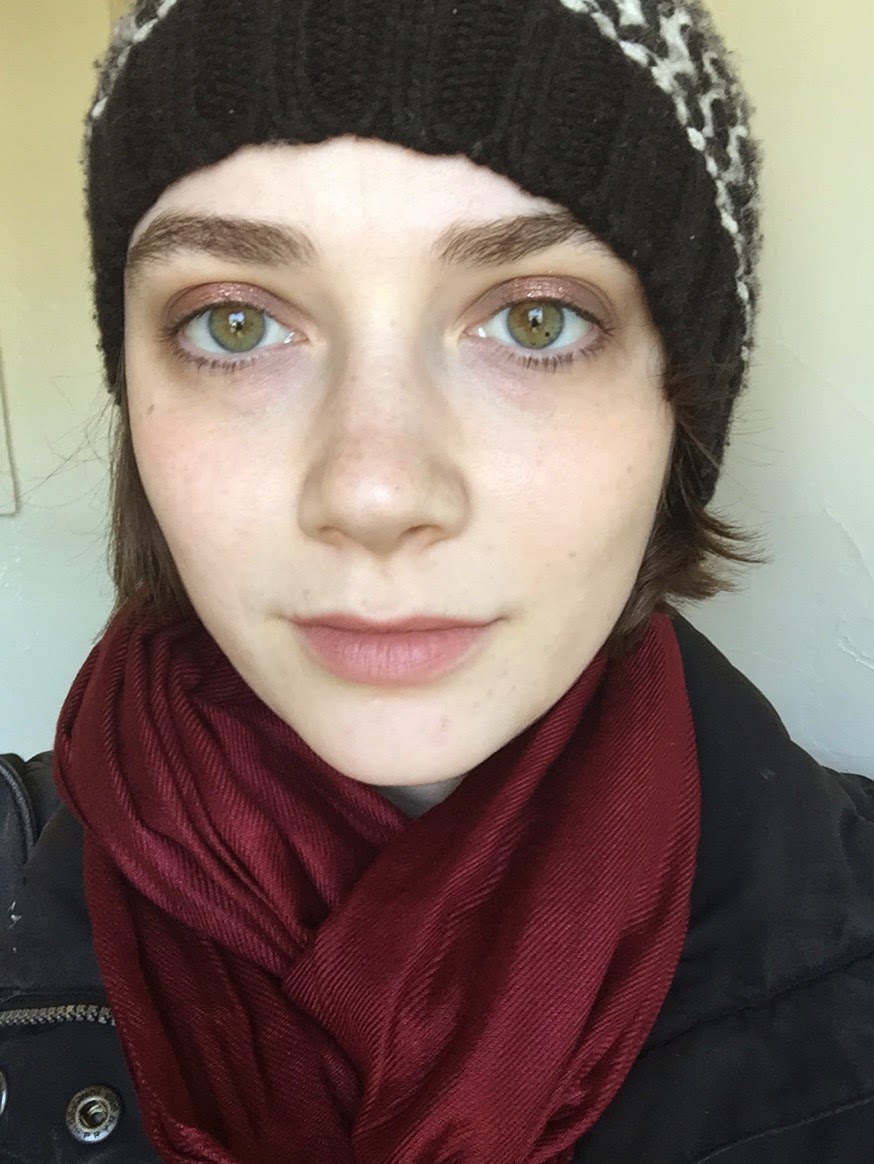 My eyes are quite deep-set, which means that there's no way to prevent the glitter in Sequin from migrating up to my browbone, as happened here:

I also saw some glitter migration with Krinkle a few days later: here it is with NARS Lhasa, Matte Naked again, and I think NARS Mata Hari blush. Yes, I'm wearing exactly the same earrings and scarf as in the previous FOTD, because I just don't care anymore. (Though I apparently care enough to photograph myself in the same outfit, and more or less the same makeup, day after day.) 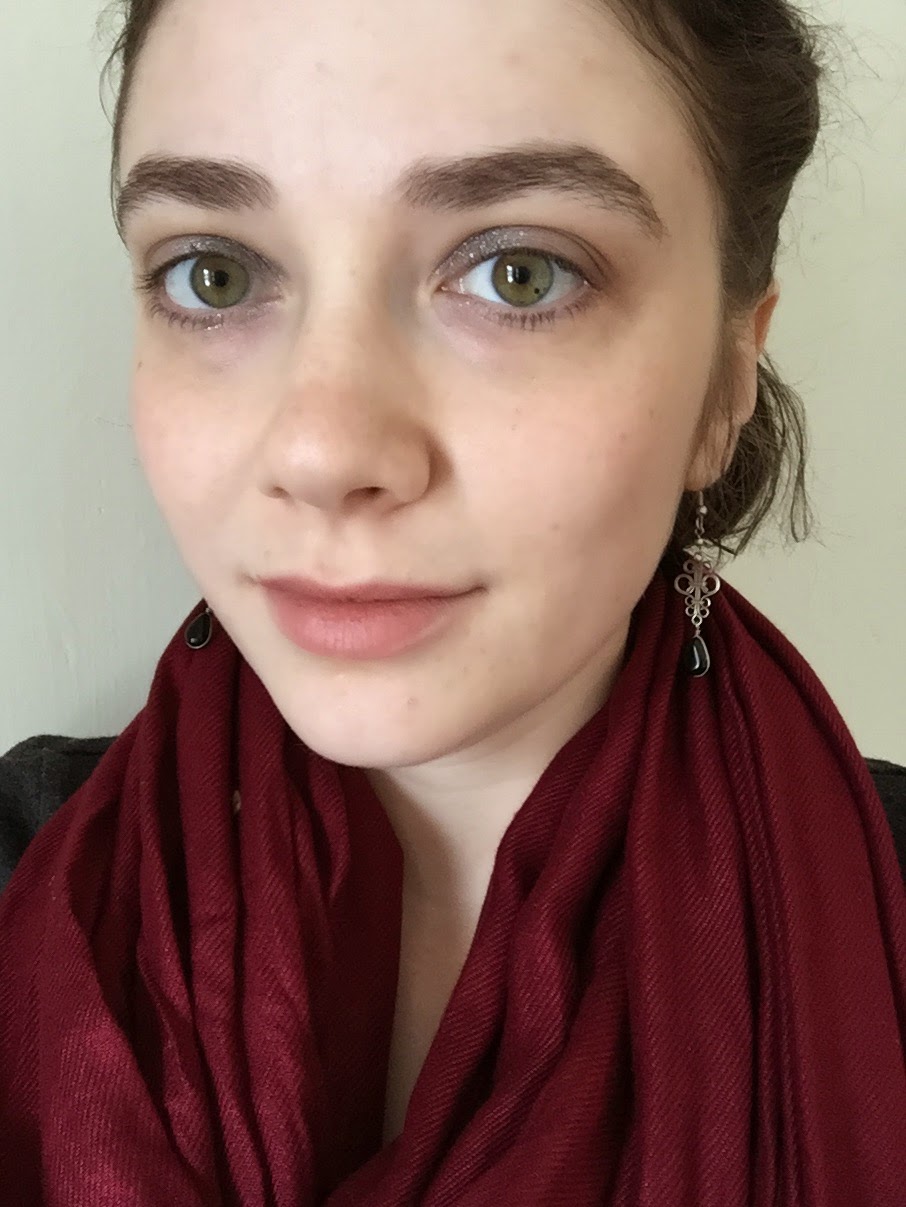 Despite its glitter issues, Krinkle impressed me that day by clinging to my lids (and browbone, and undereye circles) even after an hour at the gym. Not a pretty sight, but worth documenting. That pigment stays and stays, especially compared with Lhasa. I wasn't even wearing primer!

Finally, yesterday I blended Bae into an old favorite, Maybelline Bad to the Bronze. I used Bae only on the outer half of the lid, but the glitter migrated all over. Blush, barely visible, is Sleek Flushed; lipstick is Matte Naked, of course. And, shit, I just realized that I'm wearing that scarf again. 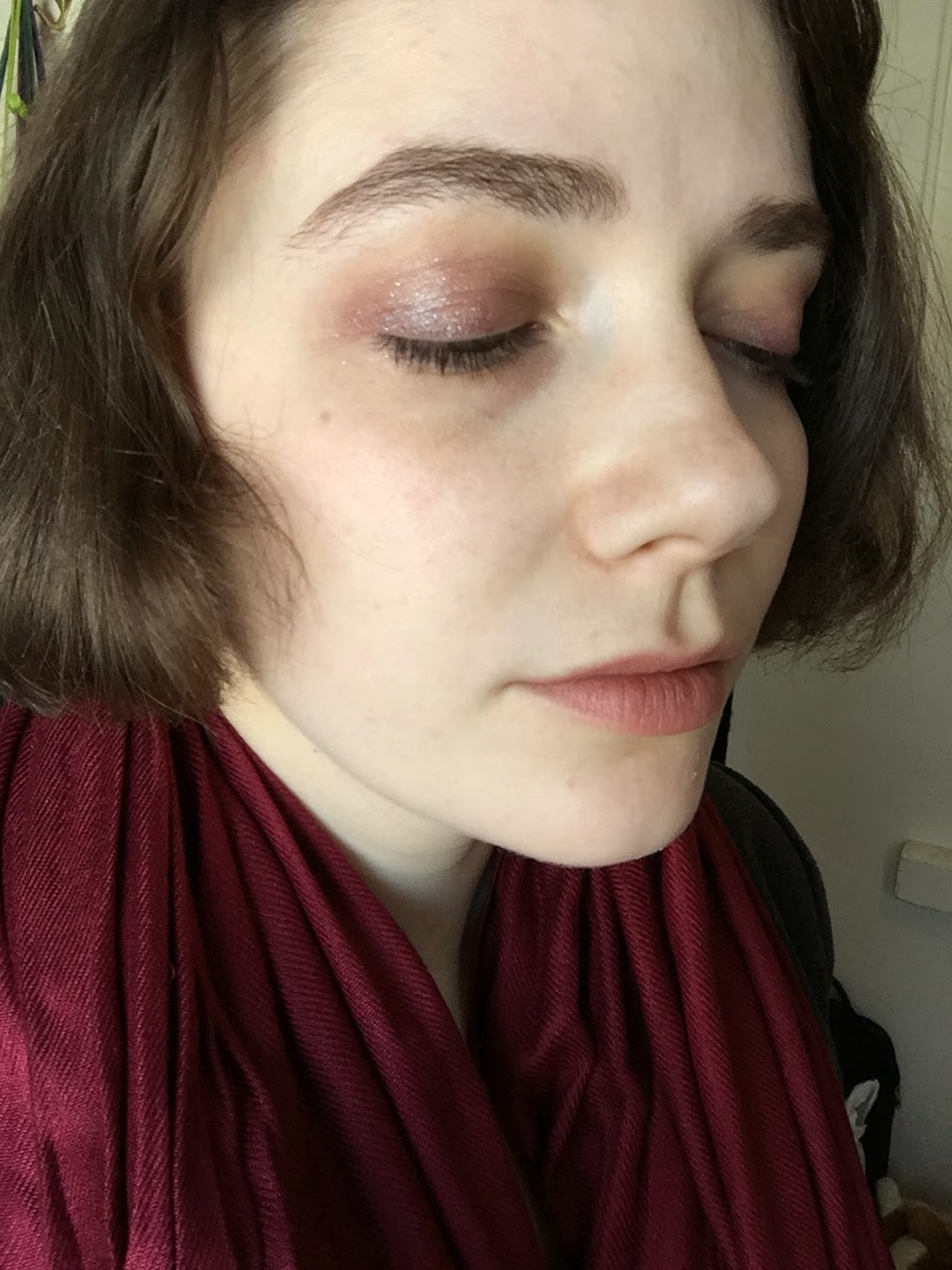 My love for Matte Naked took me by surprise, but maybe it shouldn't have. After all, it happens so often: I wander into a drugstore with no idea what I want, and choose something at random that quickly becomes one of my favorite products. I should take it one step further and blindfold myself before setting foot in the CVS beauty aisle. One of the reasons for my (over-)reliance on Matte Naked is that it's so kind to my parched lips. It really does protect them from further dehydration. By contrast, I wore NARS Angela once this week and had to take it off after two hours. Yes, the Audacious formula is drying! There, I said it! At least this means I no longer feel compelled to amass half a dozen Audacious lipsticks.

By the way, I haven't forgotten about the post on Instagram beauty: it's coming next week, after I finish some urgent academic stuff. For now, though, a question: do you ever go through periods when your own makeup choices kind of bore you?
Posted by auxiliary beauty at 8:03 PM