Sorry I've been posting so erratically this month! I usually try for one post every three days, but lately it's been two posts in two days, then a break of five or six days, then two more posts in two days. I'm trying not to beat myself up about it, because inspiration comes and goes for us all, but I'm hoping I can get into a more regular pattern soon. I blame March. It's an untrustworthy month in so many ways, and it leads me to do untrustworthy things like make an Ulta order when I've already announced a March-long no-buy on my blog.

"Holy magenta!" really was the phrase that popped into my head when I first saw swatches of NYX's new Intense Butter Gloss in Spice Cake. (My fingers keep wanting to type "Space Cake," for some reason. It's true that the deep shiny fuchsia-magenta is the sort of lip color one would wear to an intergalactic rave.) 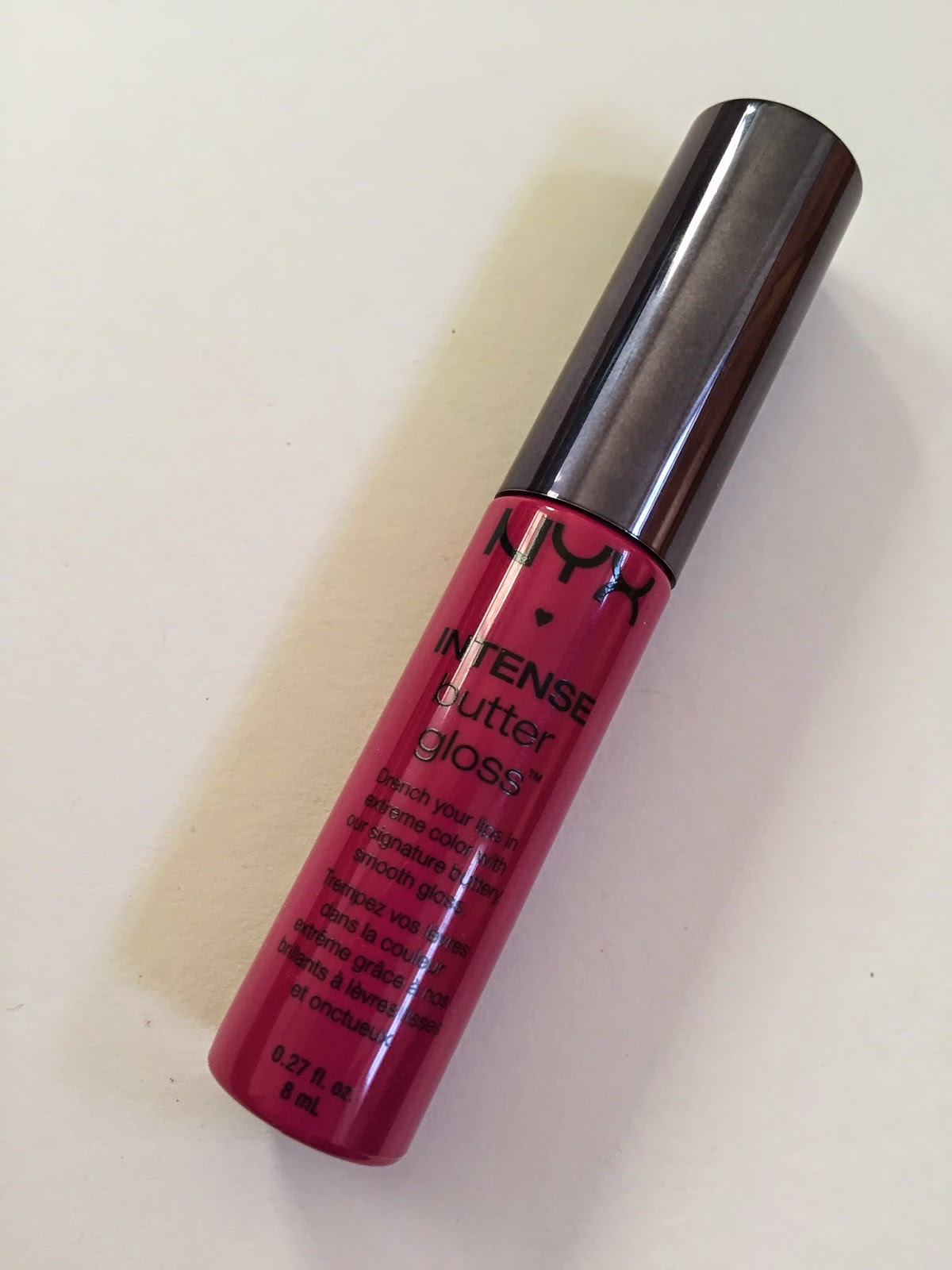 Despite my love for NYX's original Butter Glosses (I reviewed Peach Cobbler and Raspberry Tart exactly a year ago), I wasn't terribly excited about the Intense Butter Glosses when I first heard of them. Blogging about beauty has enabled some questionable purchases over the past year, but it's also given me a clearer sense of what kinds of makeup I'm most and least likely to wear, and opaque lip gloss is on the "least likely to wear" list. I prefer my glossy lip colors sheer and my opaque lip colors matte or semi-matte; it's hard to find a bold, opaque gloss that isn't also messy. So I was content in the knowledge that I could skip the Intense Butter Glosses...and then I saw Spice Cake. Holy magenta. When I ordered two discounted Butter London polishes from Ulta during the 21 Days of Beauty sale, I couldn't resist adding Spice Cake to my order, and here we are. 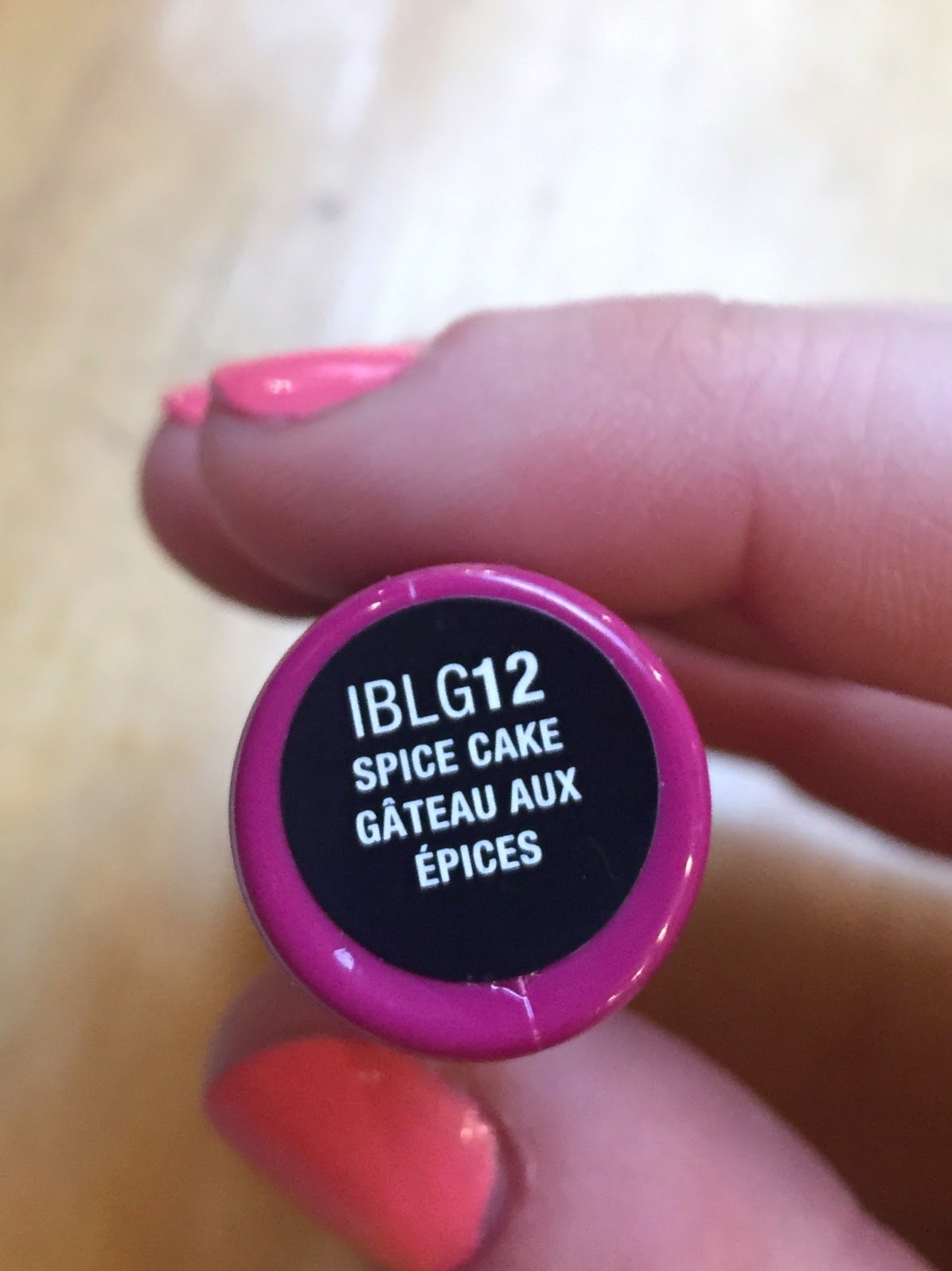 The Intense Butter Glosses are identical in size to the OG BGs, though they have metallic plastic lids instead of same-colored ones. They also have the same sugar-cookie scent; Spice Cake smells stronger than the Butter Glosses I own, but it's also newer. 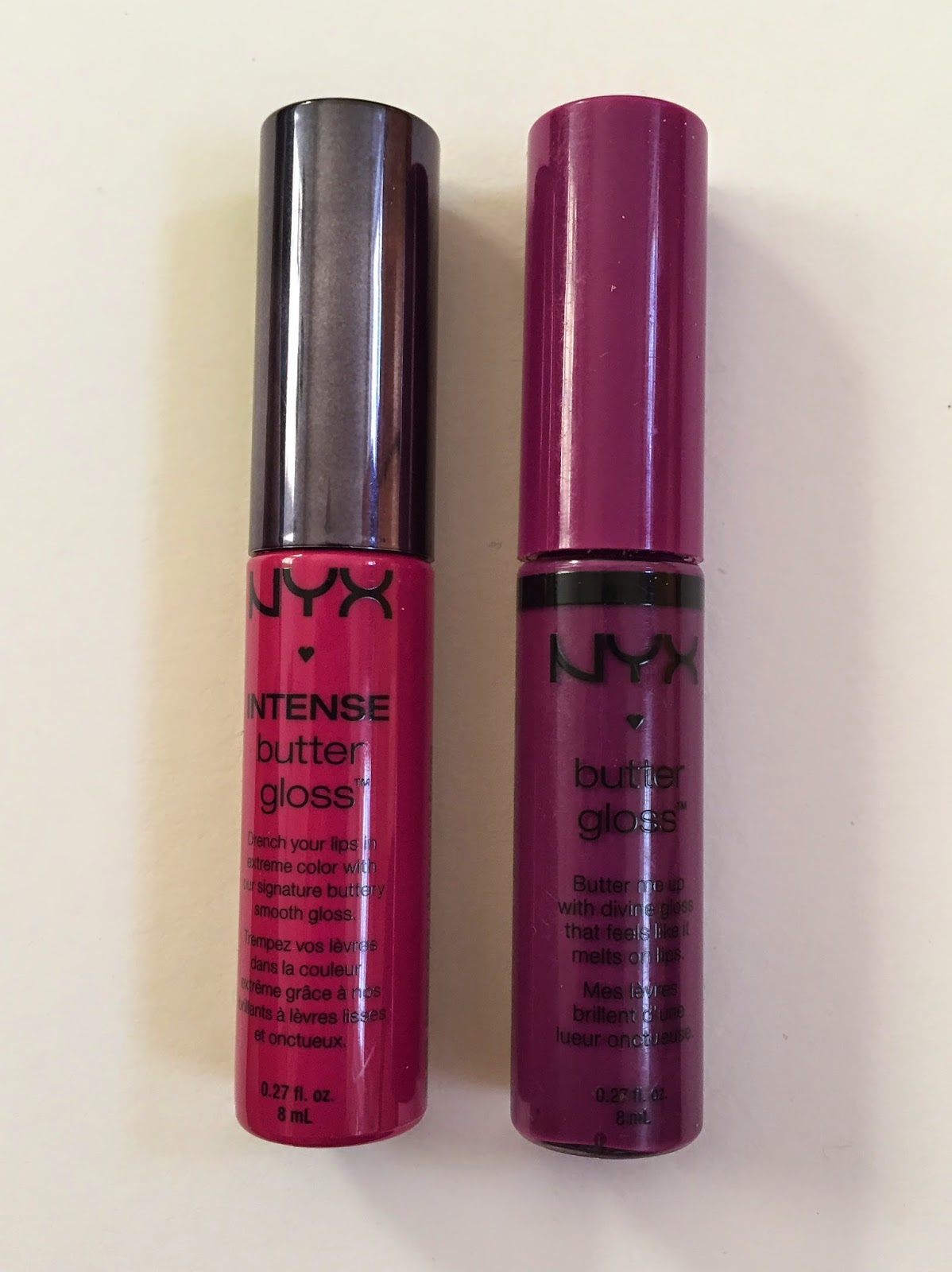 The applicators are similar, though Spice Cake's (left) is longer, broader, and flatter. I don't have much trouble getting a crisp application, but this is the sort of formula that makes me wish I had a clear lip liner to prevent migration and bleeding. 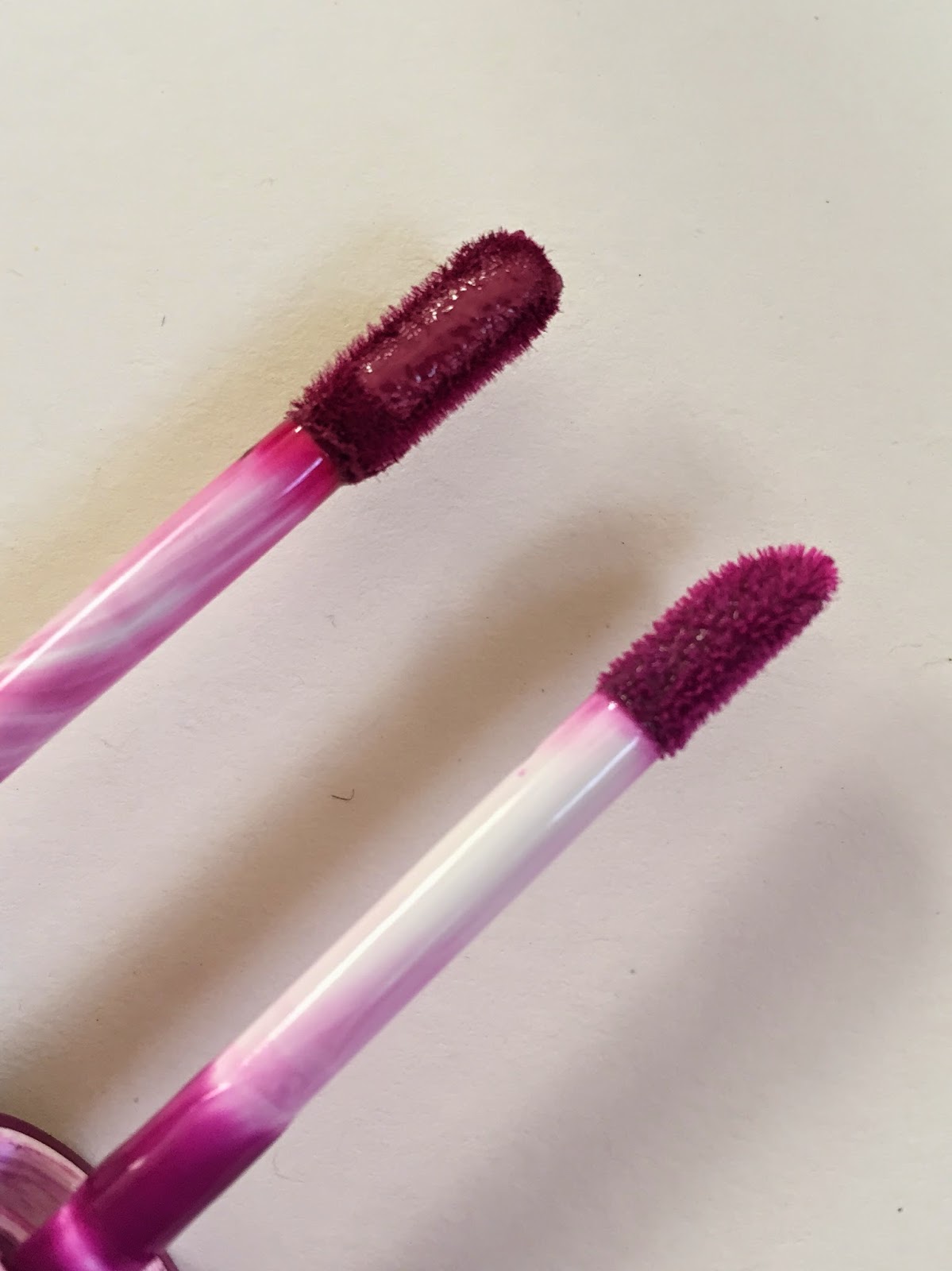 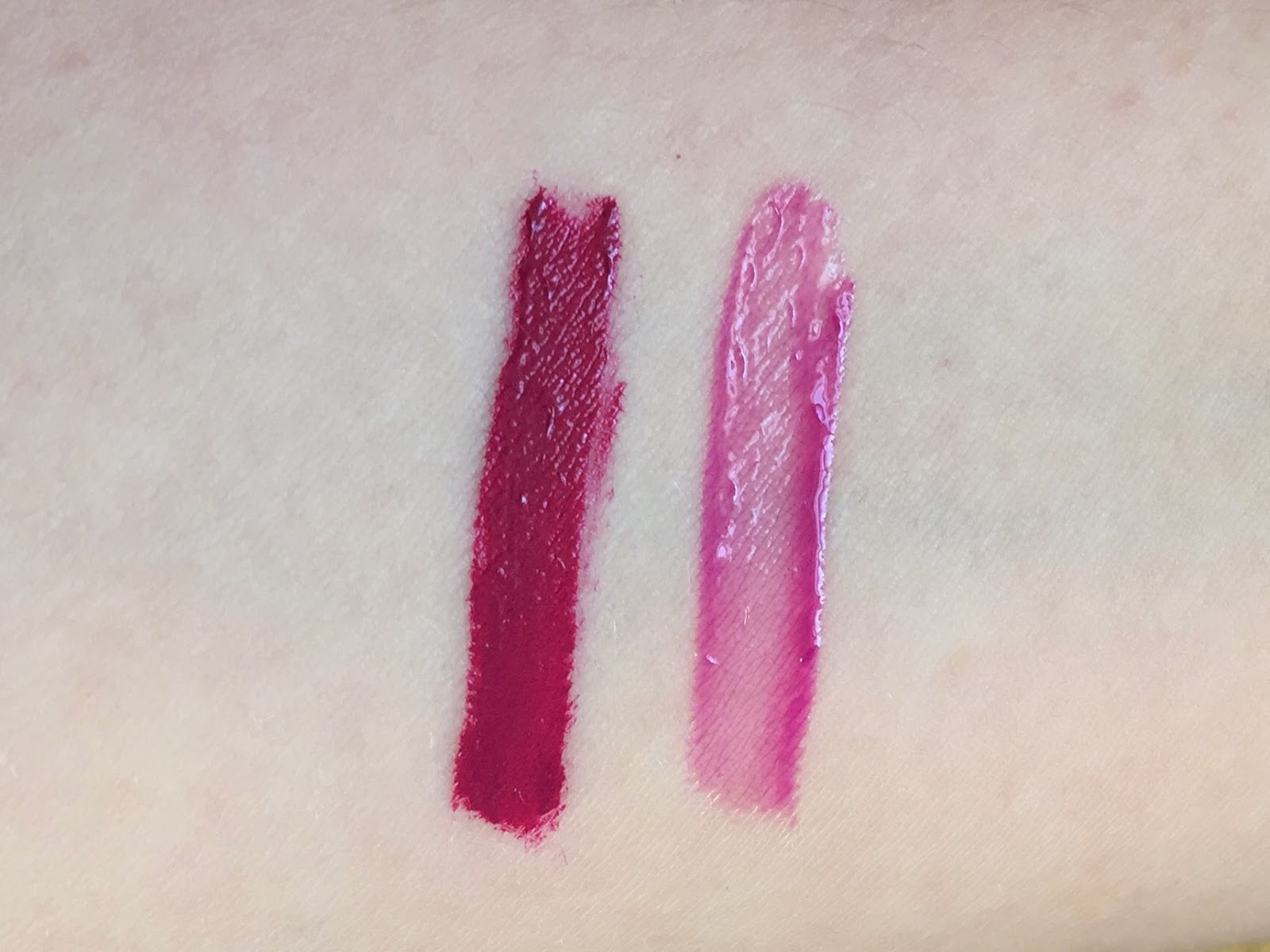 Compared with the squishy translucent finish of the Butter Glosses, Spice Cake resembles a liquid lipstick. In fact, I'm not sure I know the difference anymore between a liquid lipstick and an opaque gloss, especially with all the hybrid formulas that have entered the market in the last few years. I usually think of liquid lipsticks as longer-lasting and more opaque, but Spice Cake is as pigmented as, say, Rimmel Across the Universe, and it stains my lips considerably. Lip-color genres have become hopelessly muddled, and I say we just enjoy the ride instead of insisting on the Aristotelian unities of lipstick.

Here's Spice Cake swatched alongside a few other purple/plum/magenta/fuchsia lip colors. Left to right: Milani Sangria, Topshop Get Me Bodied, Maybelline Brazen Berry, Spice Cake, Raspberry Tart. Color-wise, Spice Cake looks like a cross between Sangria and Get Me Bodied, and it's actually more pigmented than any of the other four! 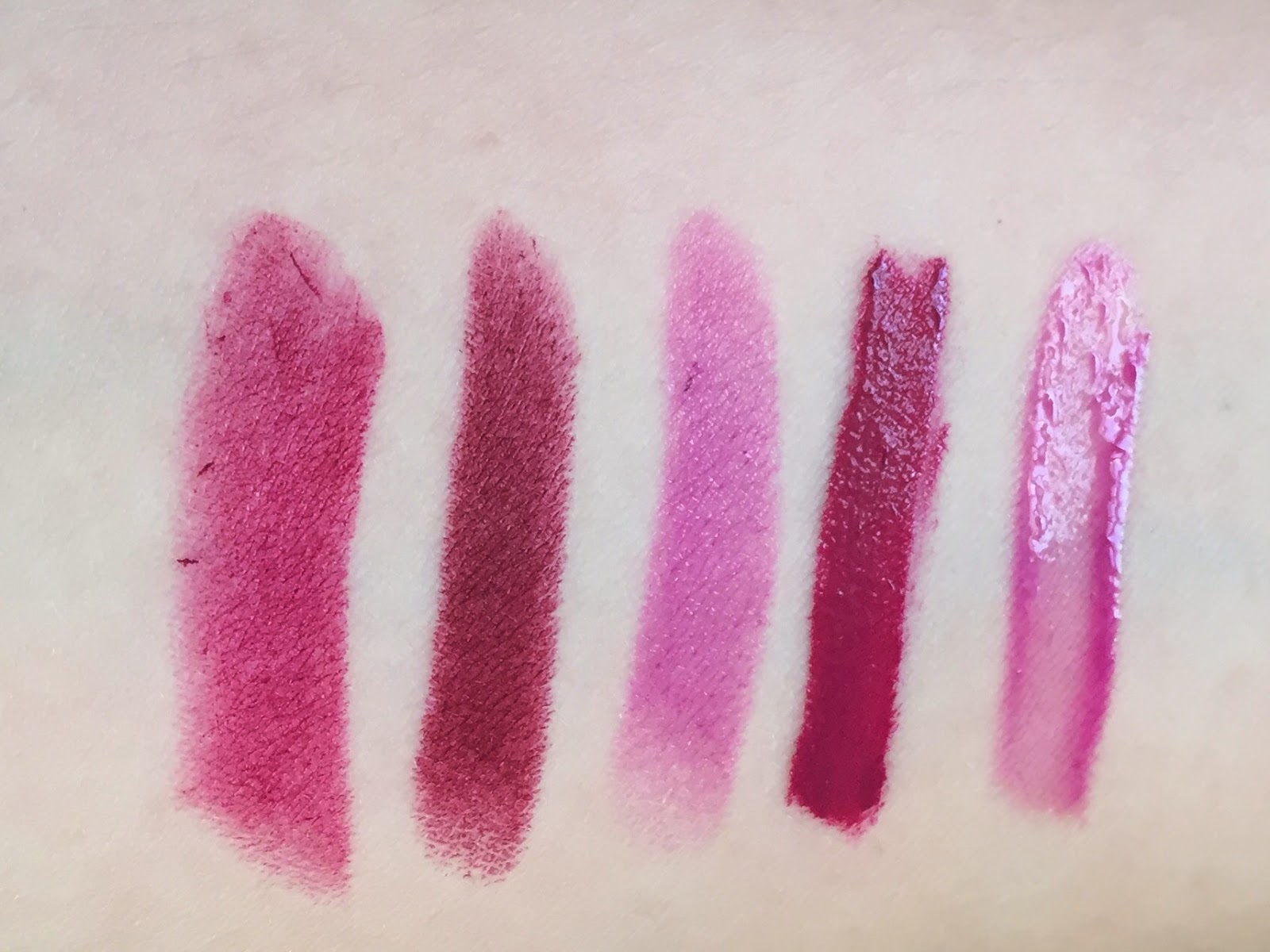 I've long suspected NYX of producing makeup meant for Instagram selfies instead of real life (cf. last year's Macaron and Wicked lipsticks), and I wonder if the Intense Butter Glosses aren't another example of this trend. While Spice Cake makes my lips look plump and full, it also comes off on everything I eat or drink, and scrubbing this gloss off water glasses and coffee mugs is surprisingly difficult. I thought about wearing it to have cocktails last night, but I didn't want to do that to the person who would end up washing my martini glass, you know?

Here's Spice Cake at full strength. Since this was taken on an overcast day, it looks darker than it would normally appear (and the past few days have been equally overcast, so I haven't been able to get a better photo):

Despite the formula's determination to stick to the rims of glasses, it doesn't feel sticky on the lips at all. You can also blot off a bit of the shine for a brighter color: 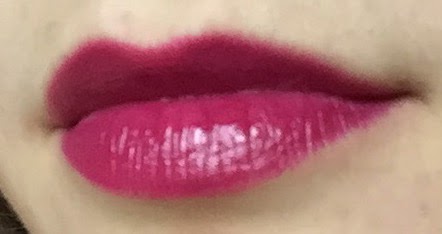 Here we are after a few hours, a cup of coffee, and a roll. Not the prettiest sight, but not completely hideous if you're more than a few inches away from my lips.

As you can see from these photos, the formula is prone to a bit of bleeding. Very few lip formulas bleed or feather on my lips, but this one does--though, again, it's less noticeable from a normal distance. If you often have a problem with this, you might want to skip the Intense Butter Glosses. Unlike the regular BGs, Spice Cake isn't moisturizing, though I didn't find it drying either.

And here's Spice Cake in context. HOLY MAGENTA, am I right? It looks like I've photoshopped the lips onto my face from a different photo. Not a subtle effect. 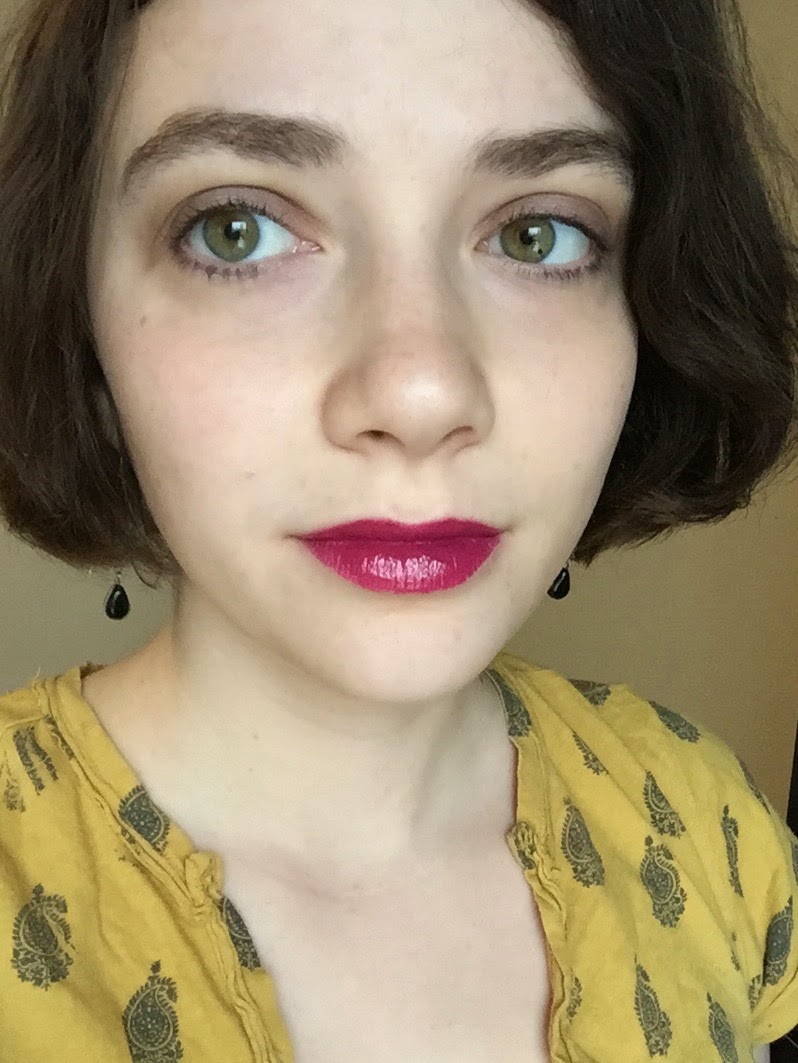 Will I buy another gloss from this range? Probably not: Space Cake Spice Cake is beautiful, but the formula has done nothing to shake my prejudice against bold, opaque glosses. Still, as such glosses go, this one is superior to most: lightweight, long-lasting, and evenly pigmented. 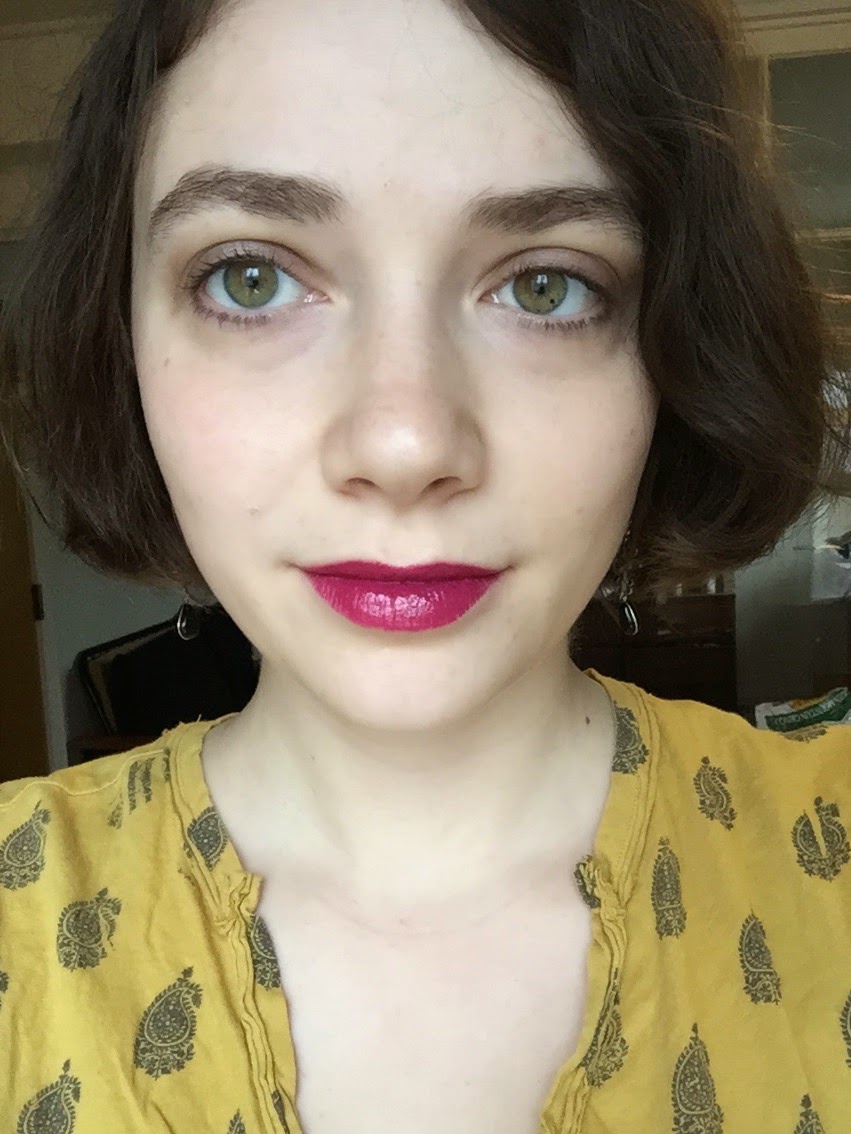 Have you tried NYX's Intense Butter Glosses yet?
Posted by auxiliary beauty at 12:44 PM