This March has felt about twice as long as a normal month, and it's still not over. I can't explain what made it seem so interminable. Maybe it was that we were teased repeatedly with the promise of spring, yet the vernal equinox nine days ago brought us this: 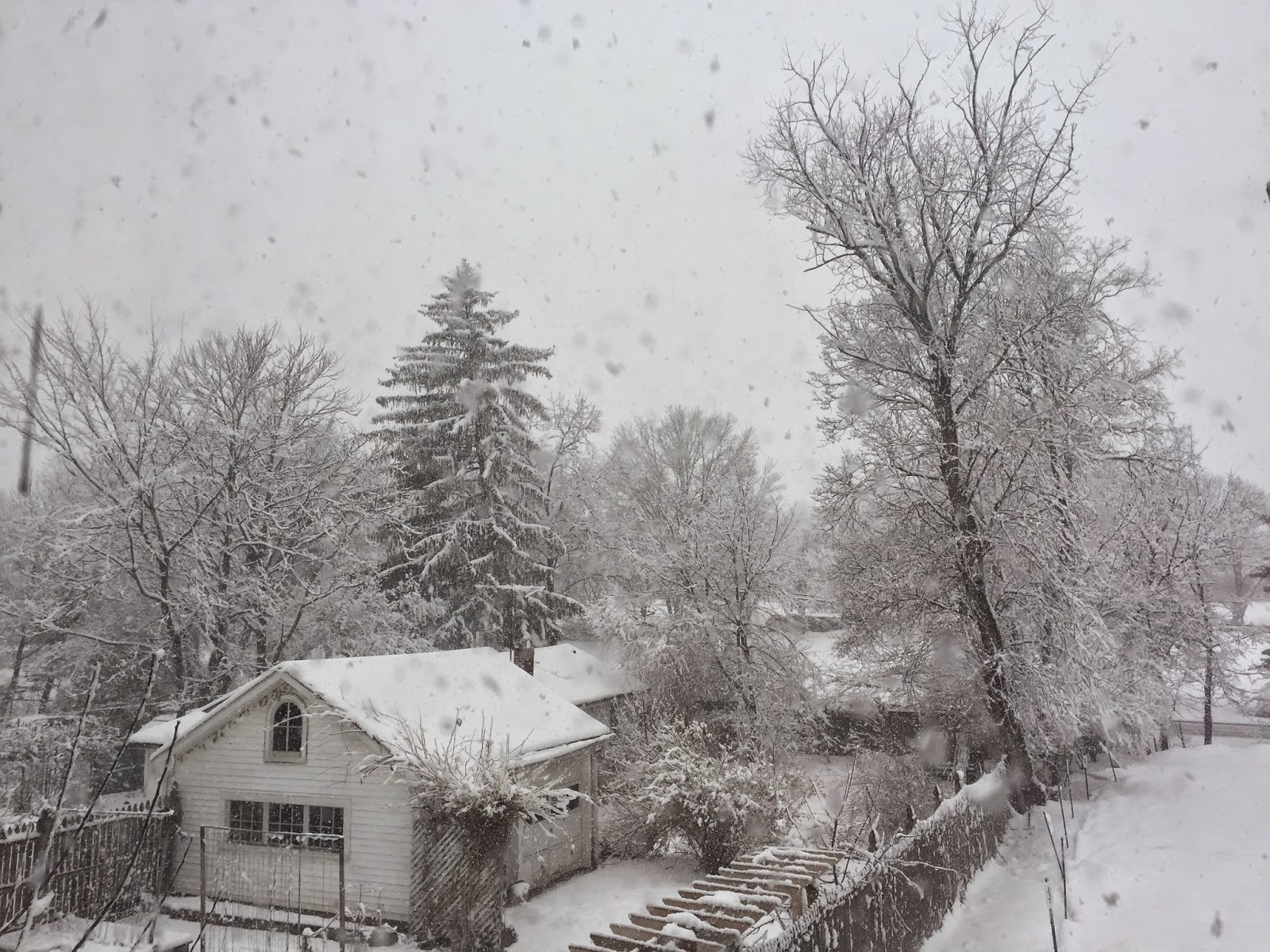 Whatever the reason, this was a long and rather stressful month, and I clung more fiercely than ever to small material delights like lipstick and baking and k-pop music videos. I enjoy reading other bloggers' roundups of their monthly makeup favorites, but since my own beauty routine is pretty consistent and my new purchases are pretty infrequent (though less infrequent than they should be), I've never felt qualified to do my own monthly list of favorite beauty products. I've been thinking, though, that I'd like to start a tradition of listing all my favorites, beauty and otherwise, at the end of each month. I want to acknowledge those small ephemeral pleasures that make day-to-day life more enjoyable but too often fade from memory when new pleasures replace them. In his autobiography, Roland Barthes writes that "the art of living has no history: it does not evolve: the pleasure which vanishes vanishes for good, there is no substitute for it." All the more reason to record it, then. I think Barthes would have liked blogs: they're perfect vehicles for capturing the art of living as it slips away.

So here are my March favorites, in the order in which I encountered them:

Once you've made your own granola (or, as my dad adorably pronounces it, "grainola"), it's hard to return to the store-bought kind. I use this Alton Brown recipe, with several modifications: I cut the amount of oats in half; use just under 1/4 cup each of oil, brown sugar, and honey (not maple syrup); add vanilla and almond extracts and cinnamon; and bake the granola for about an hour. Of course you can make the full recipe if you want three cups of granola, but giving myself access to that much granola at once is probably a bad idea. 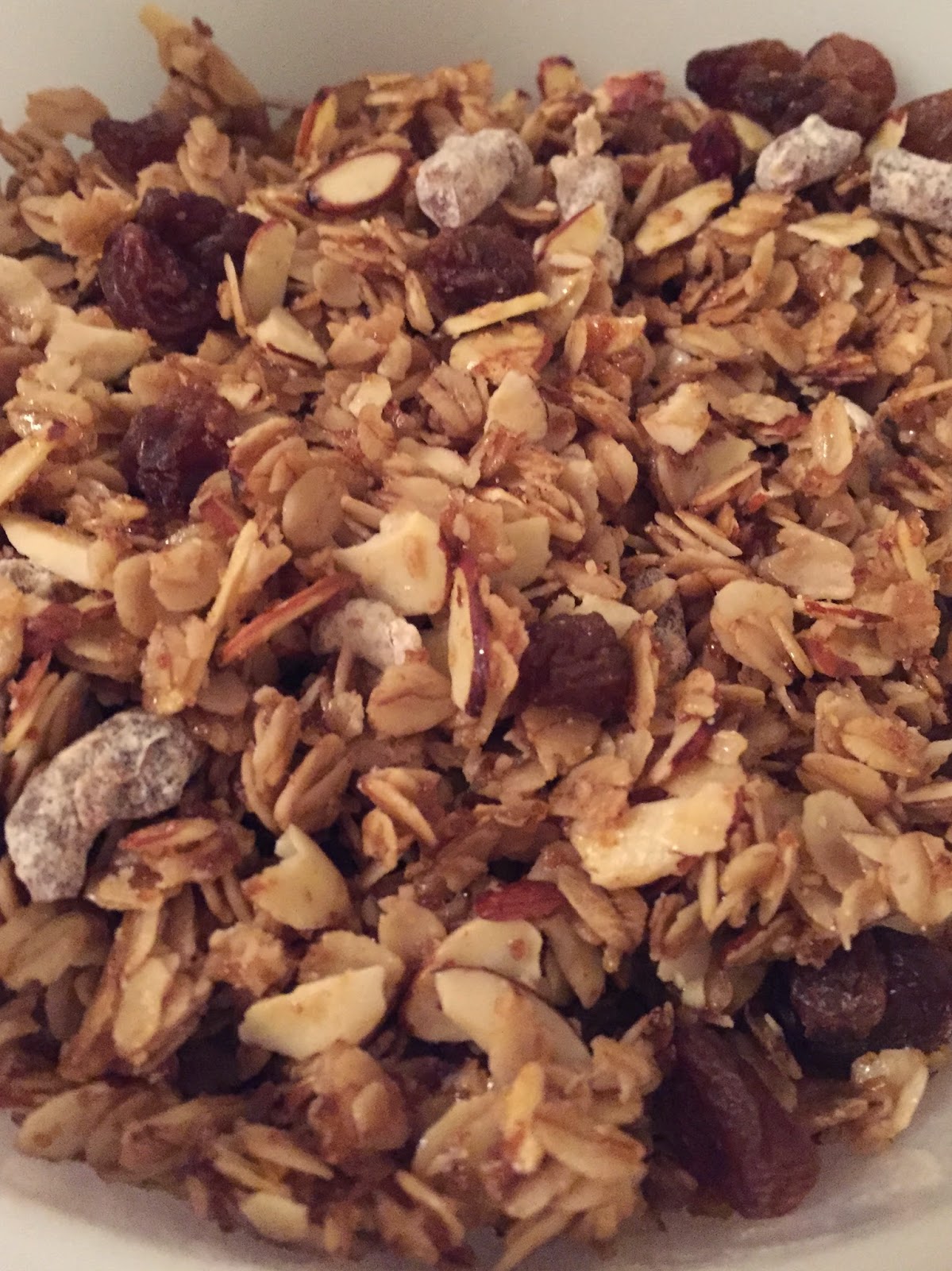 My favorite additions are toasted sliced almonds, toasted coconut shavings, dried cranberries, and those little flour-covered date rolls, but you can get as creative as you like. Just don't add the dried fruit before baking, which I did the first time I made granola. You'd think that six years of cooking for myself would have trained me not to make such dumbass mistakes, but nope.

Earlier this year, Into the Gloss introduced a series called "Weekend Workout," which petered out after five installments. It's a shame, because they posted some great exercise videos, including two short Pilates workouts for arms and legs and a grueling inner-thigh workout that I've never been able to do all the way through, despite having relatively strong legs. (I use cans of pumpkin and coconut milk instead of handweights for the arm workout, and if that's not #gradcore I don't know what is.) I relied heavily on these videos early in the month, when it was too cold and nasty to venture out to the gym.

I'd been meaning to see this for a long time: there are too few film adaptations of non-Shakespearean Renaissance plays, and Jarman's aesthetic is similar to that of my favorite director, Peter Greenaway. How to describe it? Dark, intensely atmospheric, ornate but seedy, equal parts stylized and visceral. In Edward II, Tilda Swinton, wearing immaculate clothes and makeup that evoke Dior's New Look, kills a man by gnawing through his jugular. That's about the shape of it. 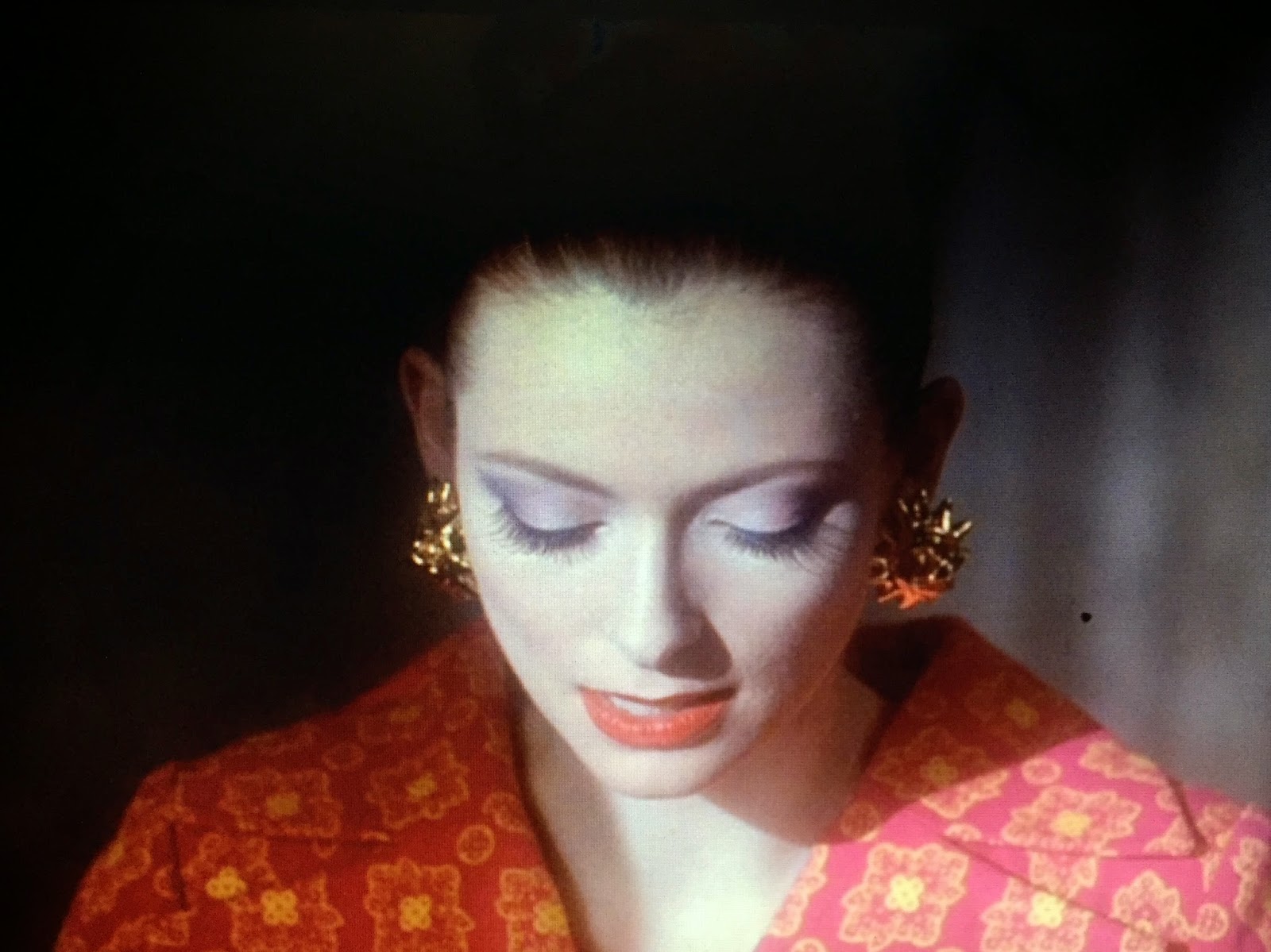 Jarman's film is a 1991 adaptation of Christopher Marlowe's tragedy of the same name. Set in a dystopian, vaguely fascist England, it follows the downfall of the homosexual Edward II, who alienates the court by neglecting his queen and political duties for his lover Piers Gaveston. Jarman portrays Edward a bit more sympathetically than Marlowe does, though no one comes off particularly well--least of all Edward's spurned queen, played by Swinton. She wears some amazing makeup, though. 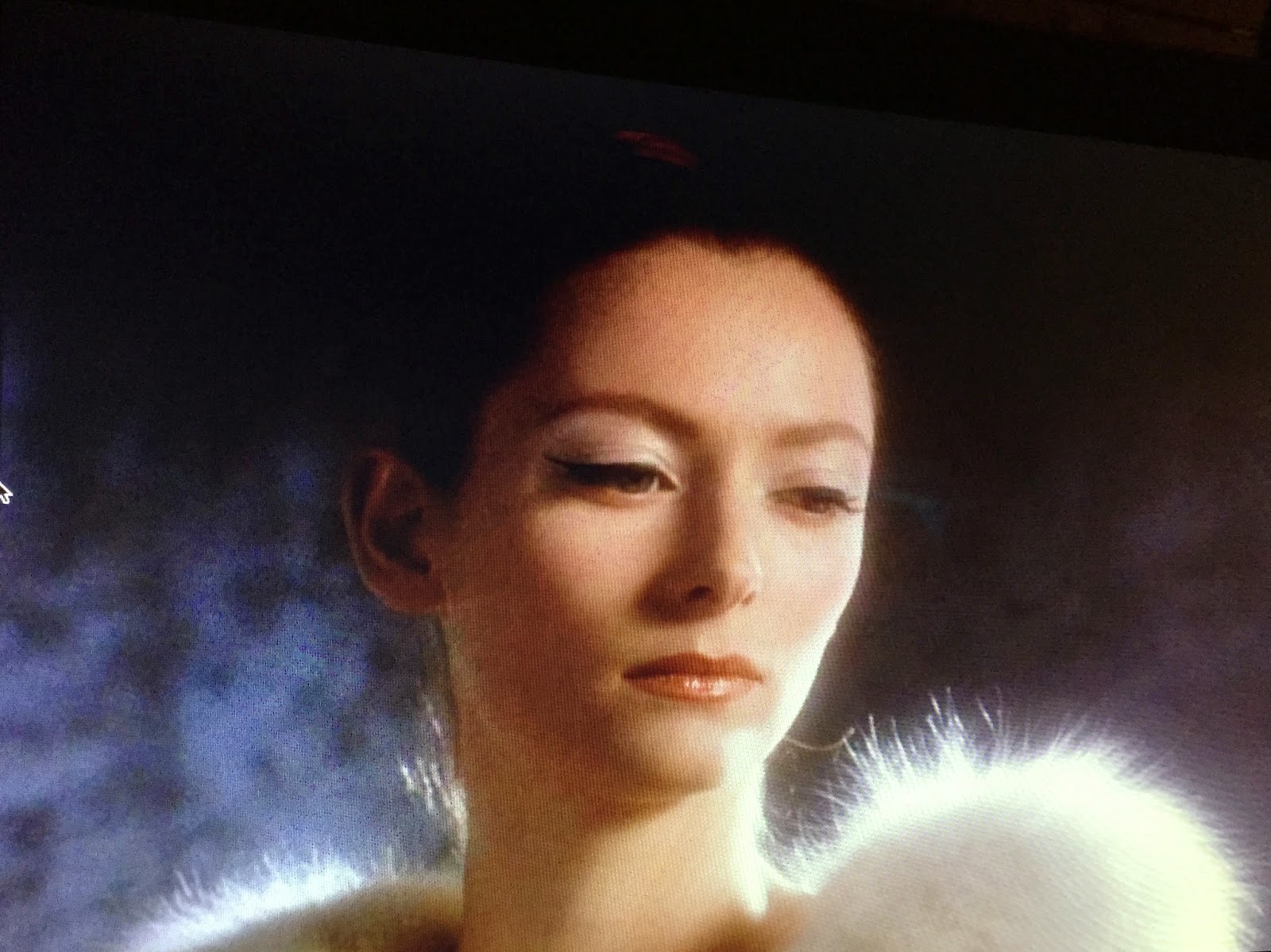 No color feels springier to me than peach, and writing a post on Urban Decay Revolution Lipstick in Streak put me in the mood for other peachy makeup. Left to right: Sleek blush in Life's a Peach, Urban Decay Streak, and Butter London Trout Pout. 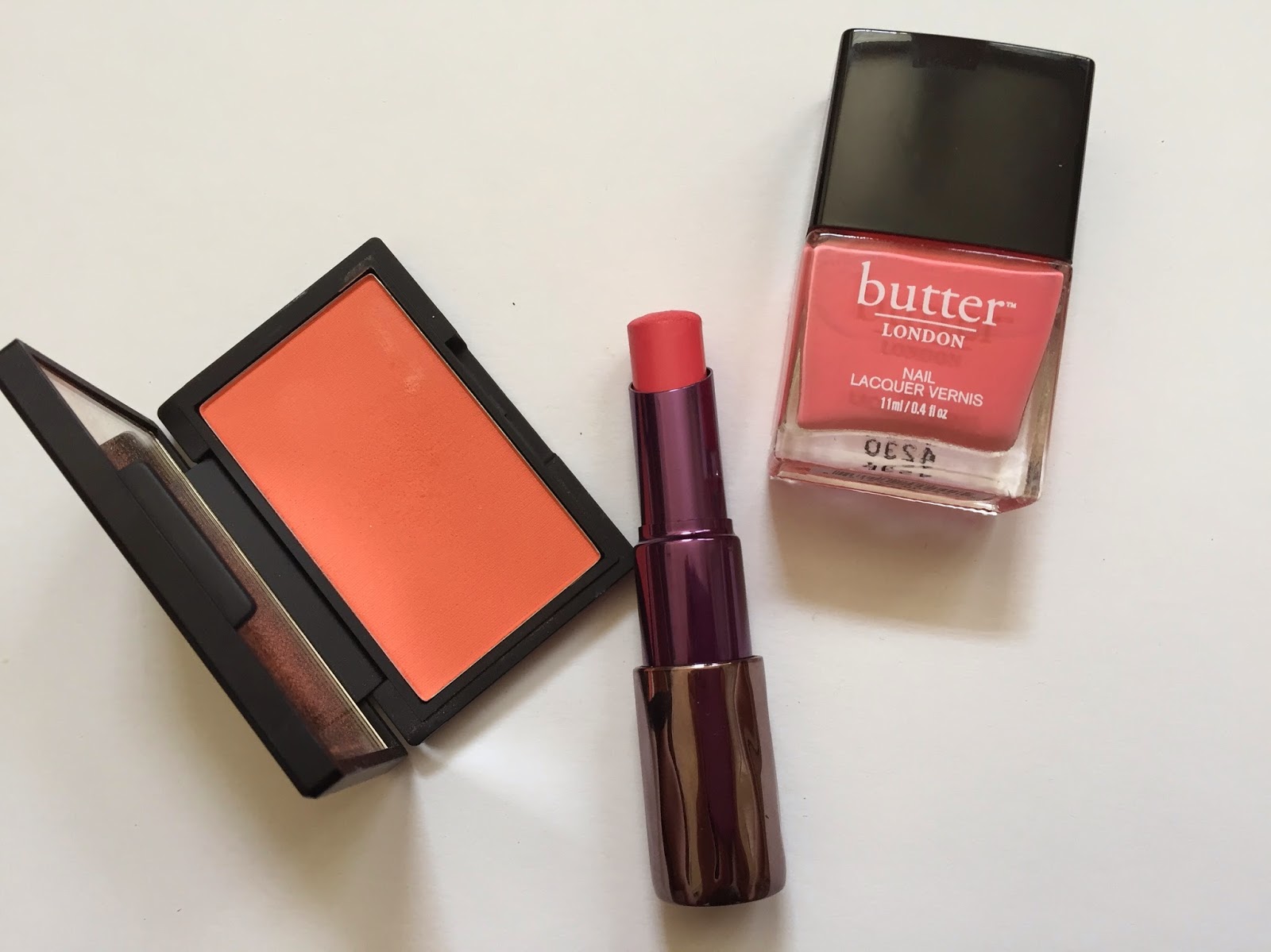 The blush looks intimidatingly orange, but it melds with my pink undertones to produce a flattering soft peach. I'm glad I rediscovered Life's a Peach before buying a pinker peach blush, which I was contemplating earlier this month. Very little has happened in my blush-wearing career to disprove my original hypothesis: that all blushes in the same color family look pretty much identical once applied and blended out. (This is not at all true of lipsticks, of course.)

Not peach, obviously, but still worth a mention. 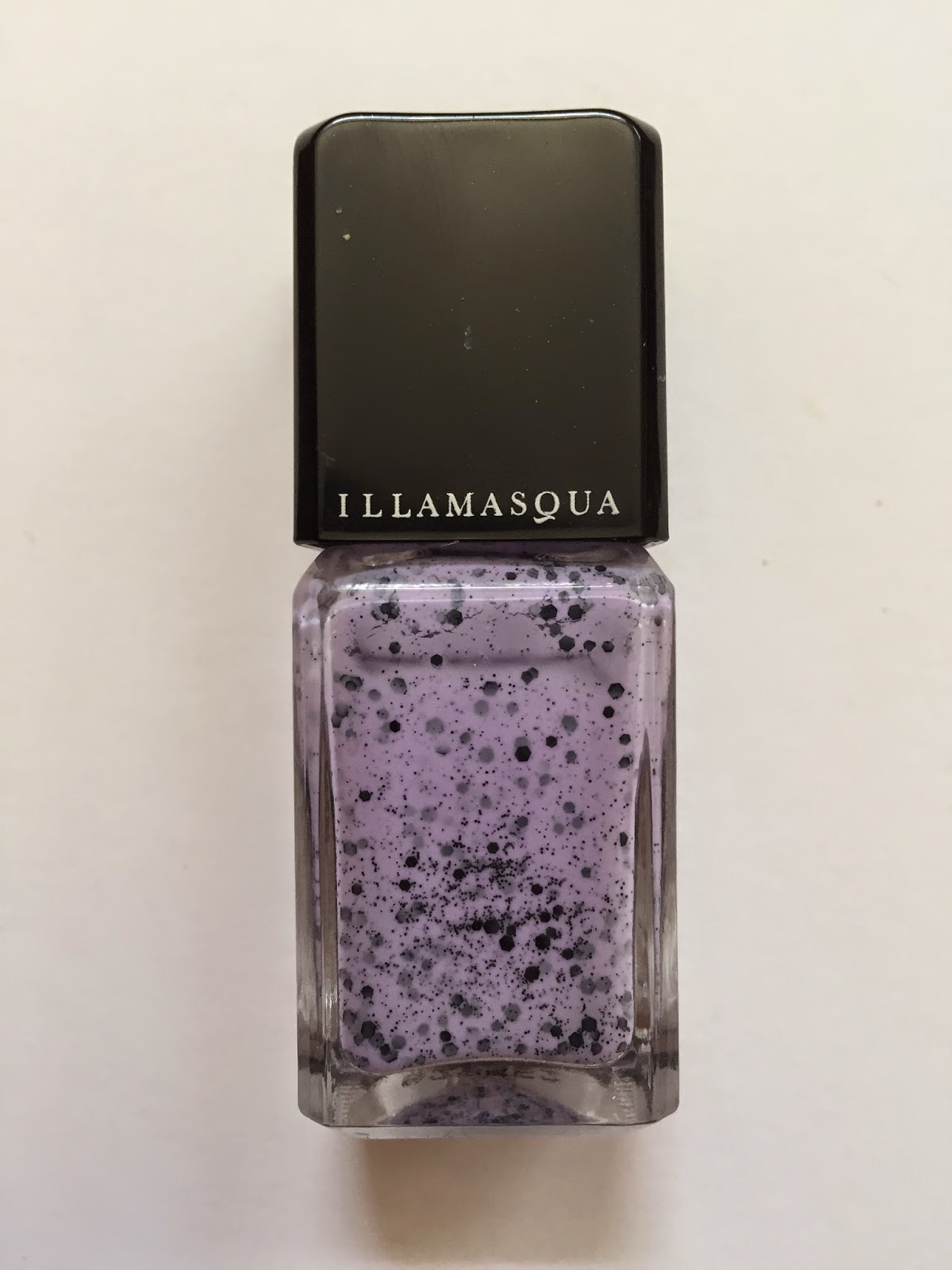 This lovely lavender with matte black glitter has seen less wear than it deserves over the past two years, because I can't bring myself to wear it in any season but spring. It makes my nails look like speckled eggs, or Easter candies, or Easter candies dyed to look like speckled eggs. I should persuade myself to wear it at other times of the year, though--the formula is perfect, and I'm sure some birds lay eggs in October.

Throughout last year, I told myself that I hadn't really caught the k-pop bug: I liked Spica and Mamamoo and a couple of Orange Caramel songs and that was all, damn it. Of course I was lying to myself, to which the 30-plus k-pop songs currently on my phone can attest. My favorite new music video in March was "Paradise Lost" by Gain, a singer from the four-piece girl group Brown Eyed Girls. I was biased in favor of this song before I even heard it: it was named after Milton's great epic, and everything, k-pop included, needs more Milton allusions. But it doesn't hurt that the song is great, and that some of Gain's makeup looks are almost as epic as the Miltonic imagination: 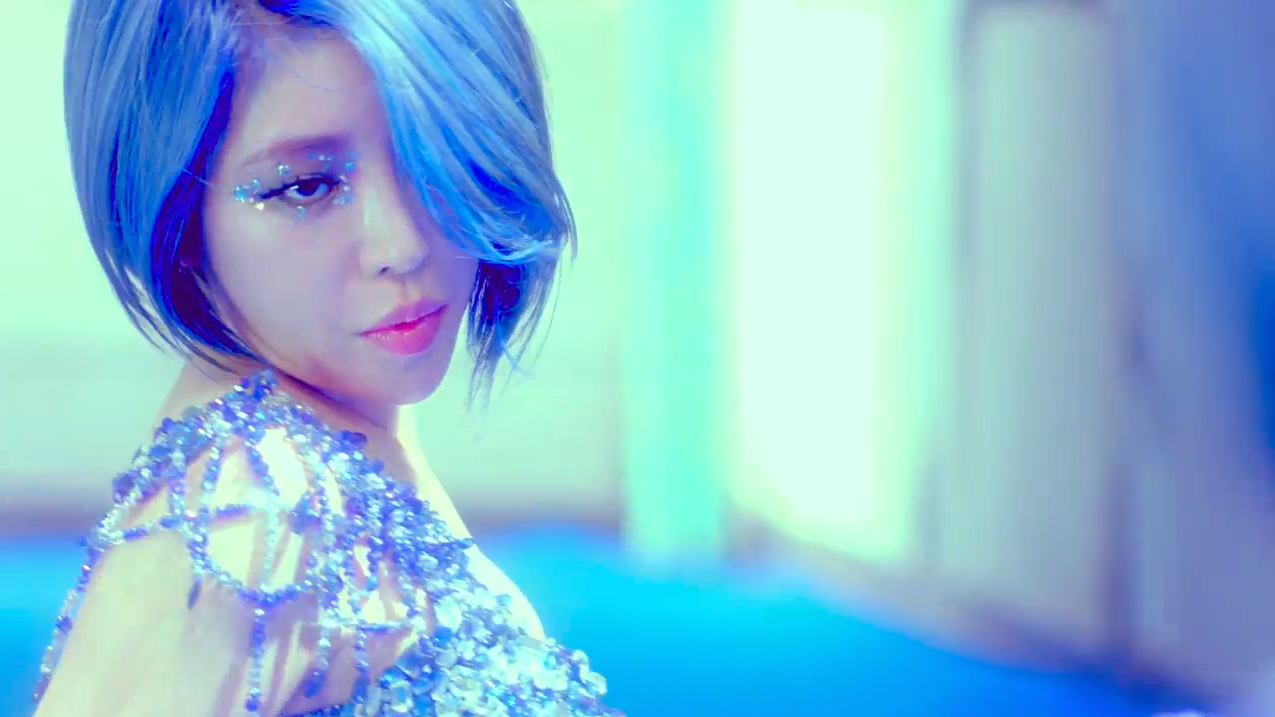 I finally got an Instagram account and, of course, promptly became addicted. The less said about that, the better.

One of the deep, dark, painfully ironic secrets of literature PhD programs is that they deprive you of the will and time for pleasure reading. When reading books is your job, you find yourself spending your leisure hours on, say, Instagram. I've been trying to resist this tendency, though, and am now 60-ish pages into William Gibson's newest novel, published last year. (I think I first heard about it from Liz's Instagram, actually.) 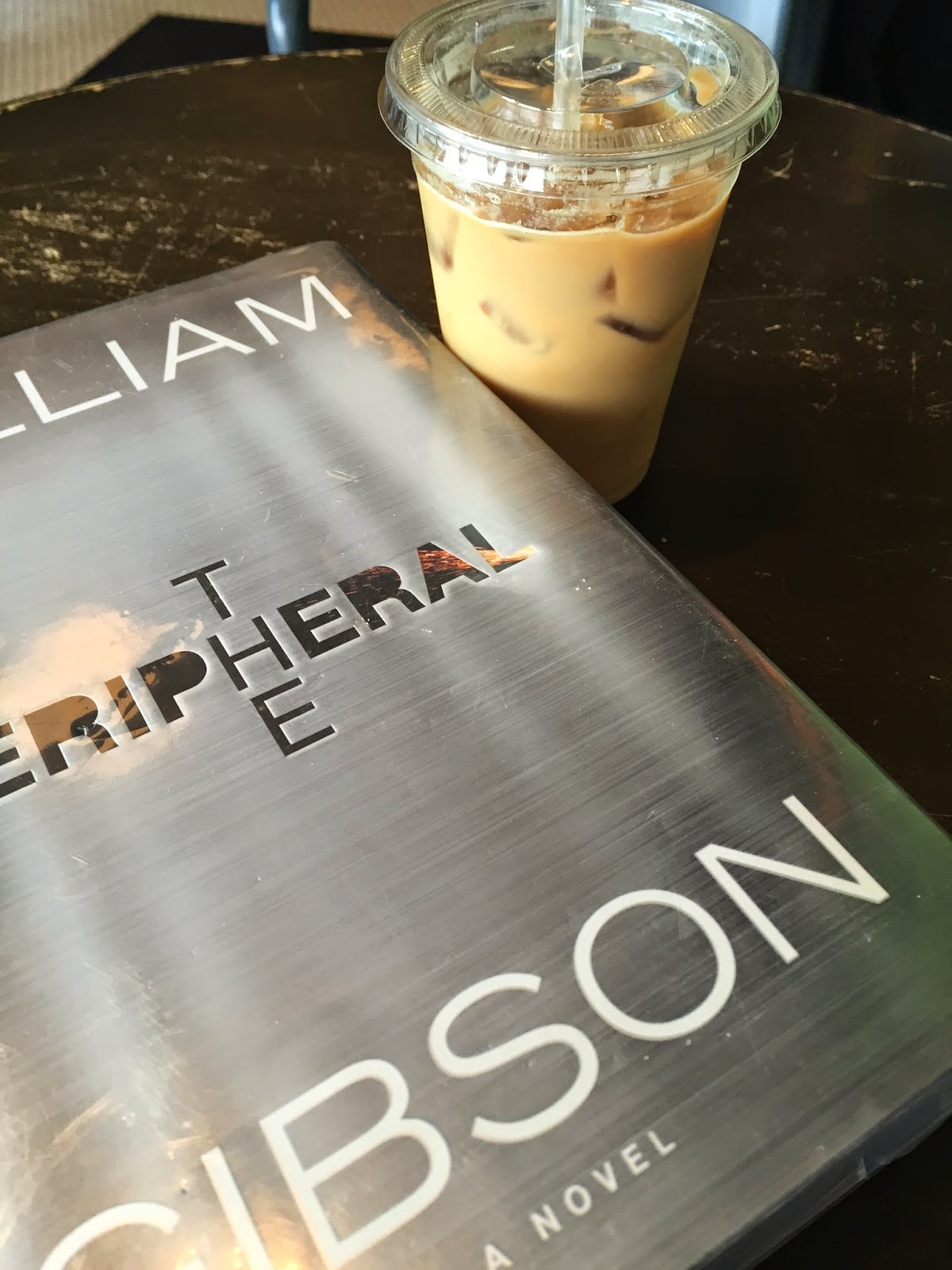 It's taken me almost all of those 60 pages, plus some supplementary reading of reviews, to figure out what's actually happening, but I think I'll enjoy the book more now that I'm on a firmer footing plot-wise. The action shifts very rapidly between the perspectives of two characters: a young Appalachian woman in the near future (big-box stores, traumatized war veterans, weakening governmental power, 3-D printing run rampant) and an urbane Londoner in a more distant future in which environmental havoc has destroyed a majority of the world's population. I've overdosed on dystopias in the last few years, but what else is new?

9. Lush Shampoo Bar in Jason and the Argan Oil

I've never spent much money or energy on haircare, since my fine, wavy hair reacts more dramatically to changes in humidity or water hardness than it does to new products. But after a series of bad hair days this month, I couldn't help but wonder if my dirt-cheap Pantene Pro-V shampoo could be improved upon. Believe it or not, it could! 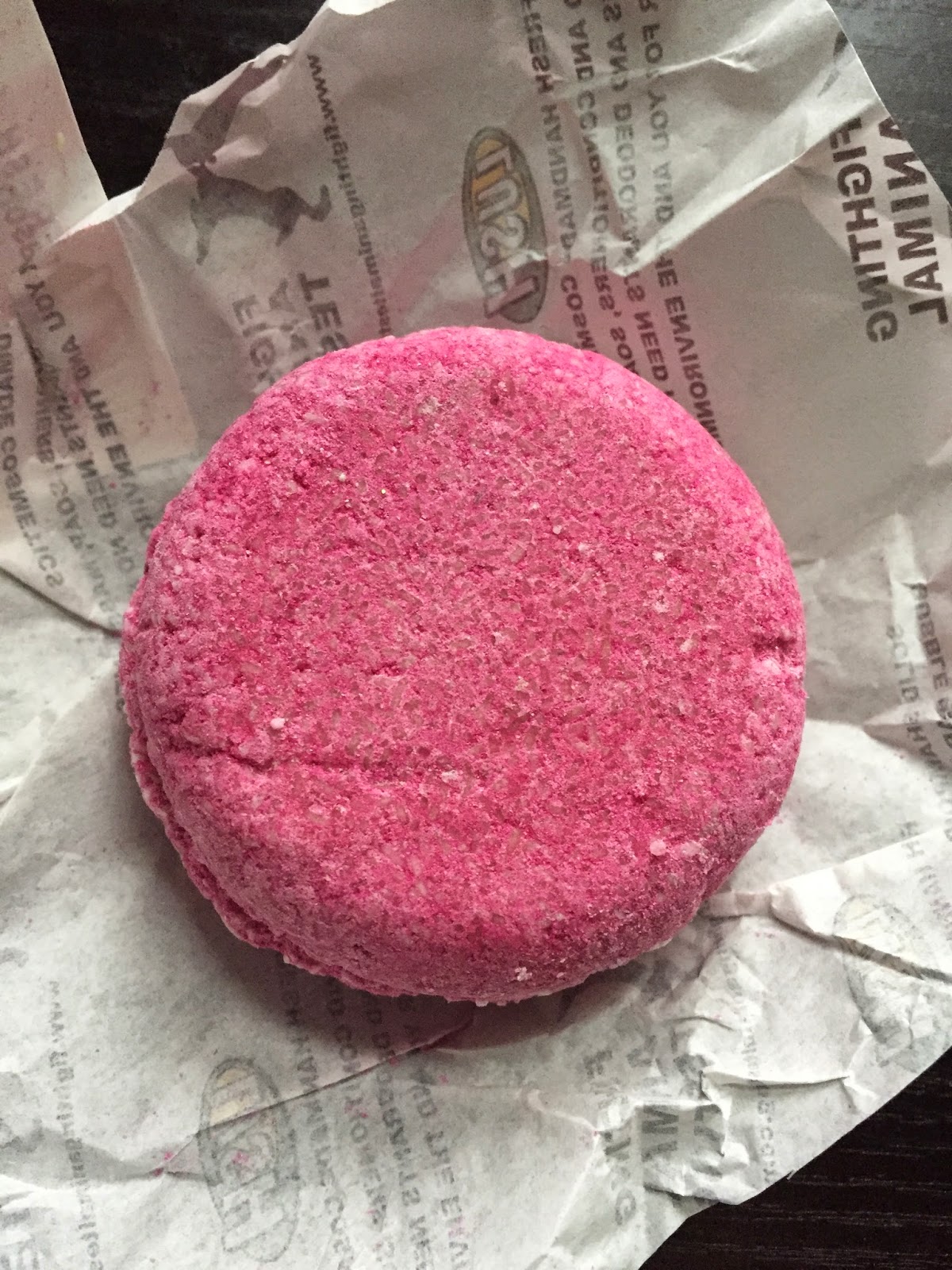 Since moving to England for a postdoc, my boyfriend has become my main supplier of British beauty products (including a new Topshop Matte Lip Bullet, which I'll review in my next post). I mentioned that I wanted to try one of the new Lush shampoo bars, and he chose this one for me, knowing my love for rose scents and groanworthy classicist puns. Lush claims that the bar will last as long as three bottles of shampoo, which seems very dubious to me, but we'll see. It does smell wonderful, and it gives my hair some extra volume and shine, as witness a recent post-shower selfie: 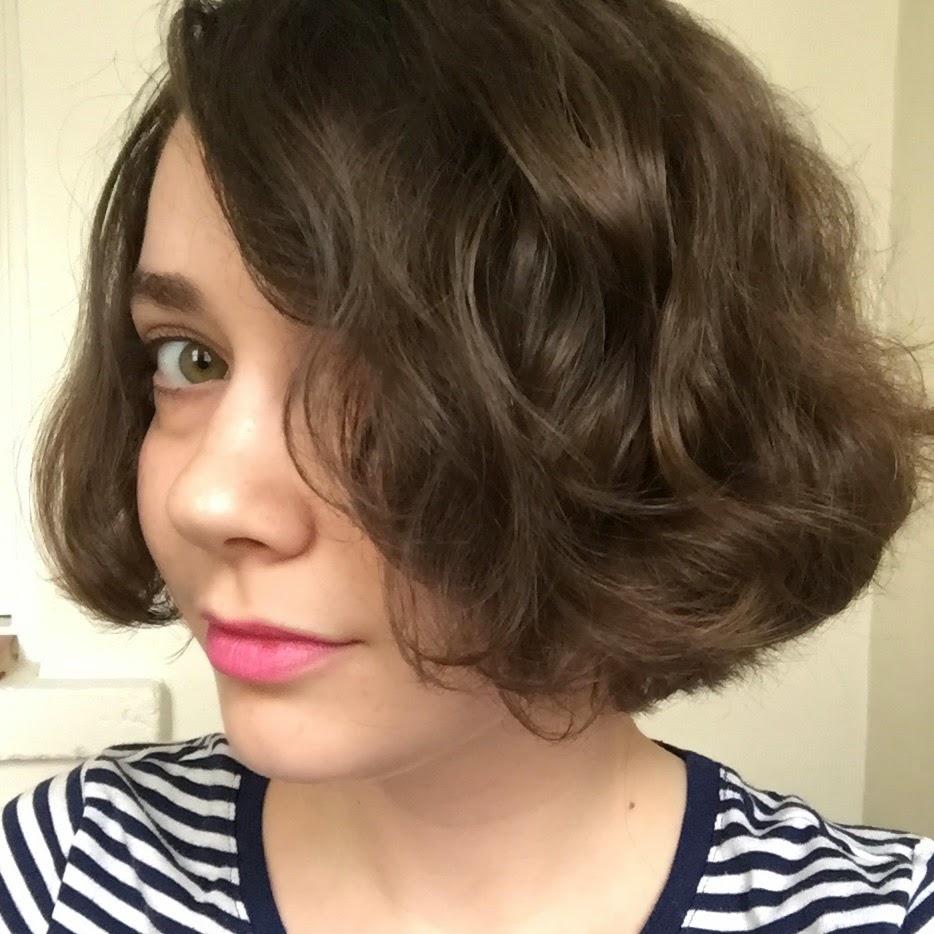 This post felt as long in the writing as March did in the living, which seems appropriate. Happy spring, everyone!
Posted by auxiliary beauty at 7:12 PM