I'm not currently abroad, but this lipstick came from abroad, so I'm going to slide it into the "beauty abroad" tag and hope the gods of blogging consistency don't strike me down. 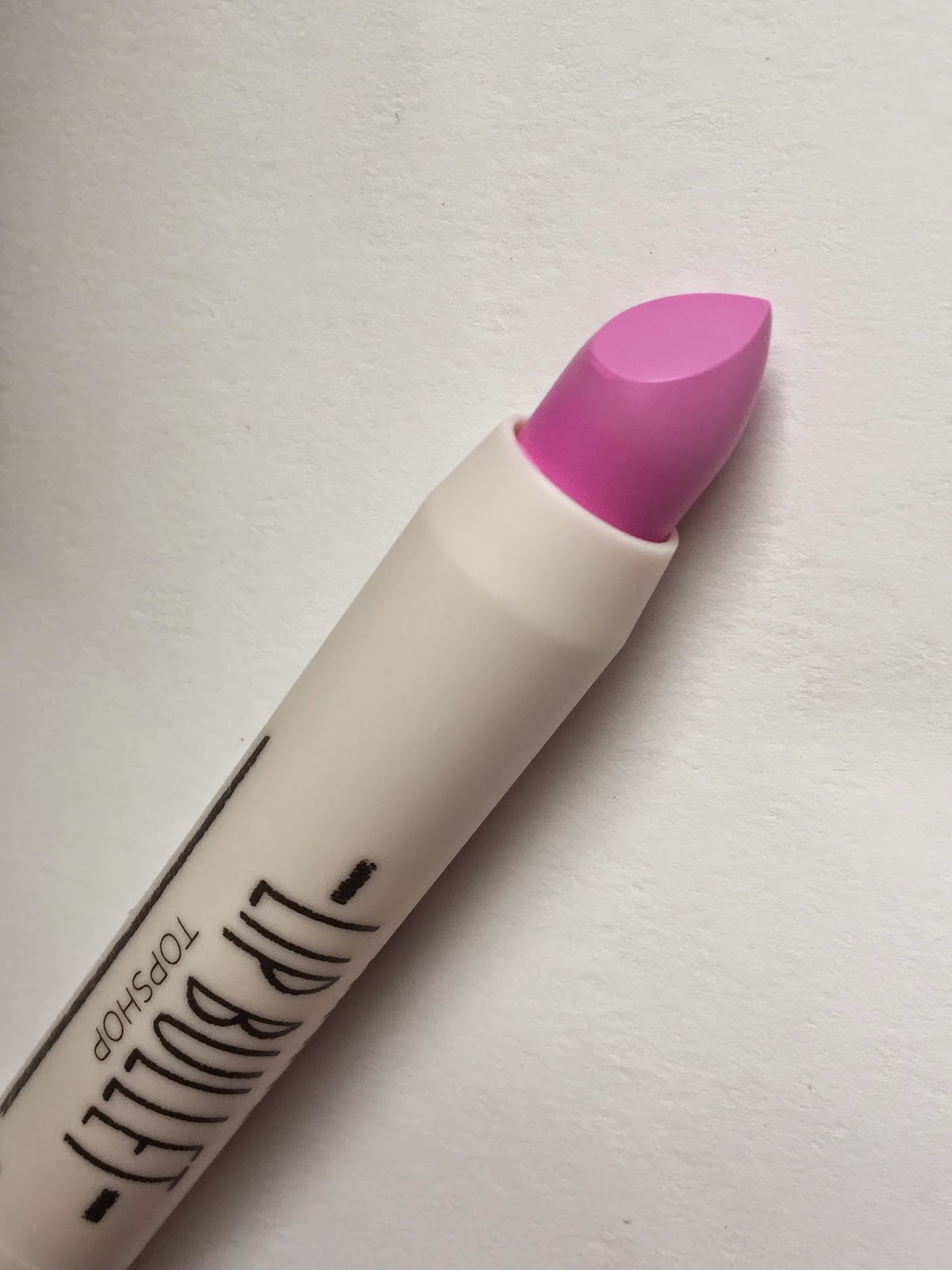 When I bought Topshop's Matte Lip Bullet in Get Me Bodied last September, I noticed a few other colors in the Matte Lip Bullet range, including a lavender named Call Me Queen Bee. Topshop was actually having a BOGO 50% off sale on lip products, but I decided to be virtuous and leave Call Me Queen Bee on the shelf. It's a shame that we can never predict which unpurchased lipsticks will haunt us, because I found myself regretting my cheapness months after I'd returned to the US. I searched for Call Me Queen Bee online, but it seemed that the Matte Lip Bullets had been limited edition for the previous fall/winter season, and there were only two left on the Topshop and Nordstrom sites: lavender-pink Plastique and orange Could This Be Love. Before my boyfriend came from England to visit last week, I asked him to check the Topshop store near his apartment to see if CMQB was still in stock. He was kind enough to have a look; it wasn't there, but he reported that he'd seen Plastique on the shelf. With my blessing, he picked it up for me, and the helpful saleswoman told him to look at "the latest MAC collection" for a darker lavender. (I knew immediately that she must have been referring to Lavender Jade from the Bao Bao Wan collection because HEY I have no life.)

Since "Get Me Bodied" and "Call Me Queen Bee" are a Beyoncé song title and a Lorde lyric respectively, I assumed that "Plastique" must be a pop-music allusion, too. Try as I might, though, I couldn't find an obvious musical source for the name. Diligent research brought up only this DC Comics villain from the '80s: 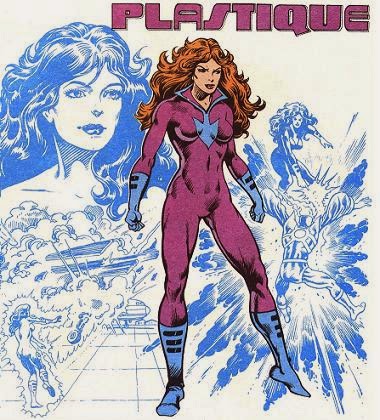 DC's wiki tells me that Plastique, real name Bette Sans Souci, "is a Canadian political activist and terrorist with the ability to generate explosive blasts" without harming herself. She certainly looks like a glambot who wouldn't scruple to wear a bright matte lipstick, and her pinky-purple bodysuit is similar in color to the lilac-tinged lip bullet... 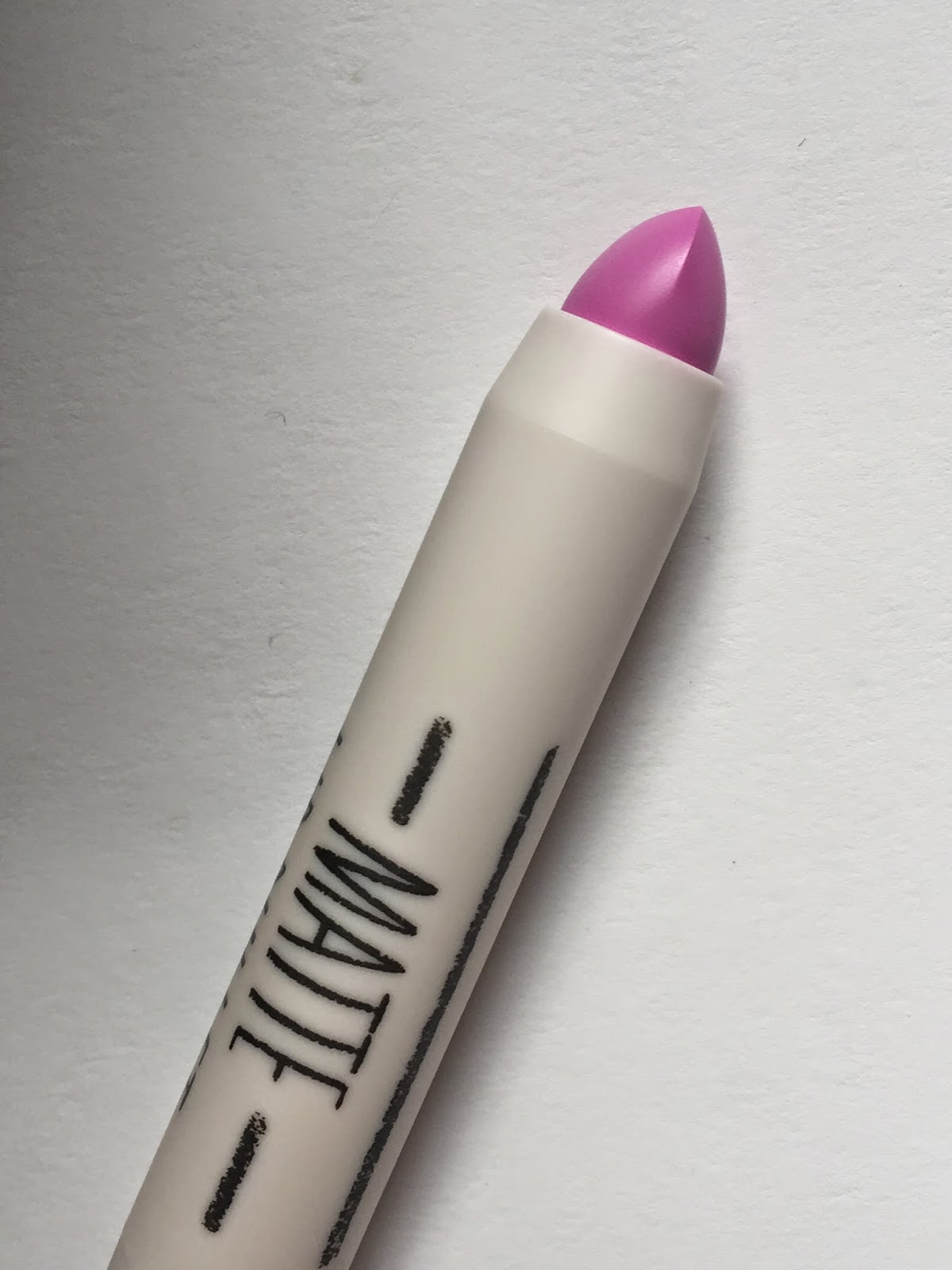 ...so let's go ahead and assume that this lipstick is her namesake. It is a very '80s color, after all. If anyone has a better idea of where the name came from, please let me know!

Plastique comes in Topshop's standard Lip Bullet packaging: a white twist-up tube with a clear plastic cap. The product retracts only this far: 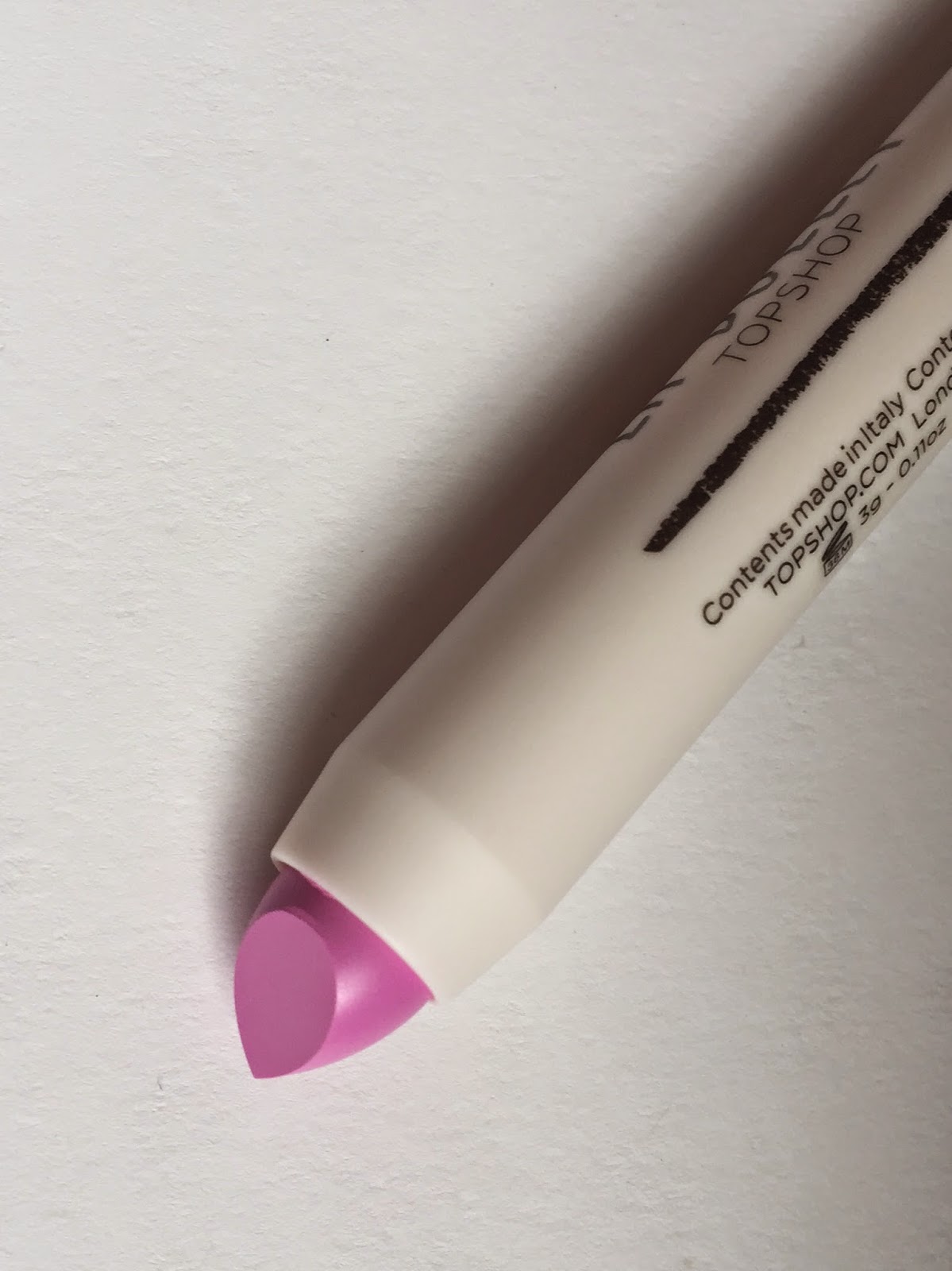 Here's Plastique swatched on its own. It has the soft, glide-on texture of Get Me Bodied, but it's less pigmented: this is one layer, and I find that I need two for full opacity on my lips. 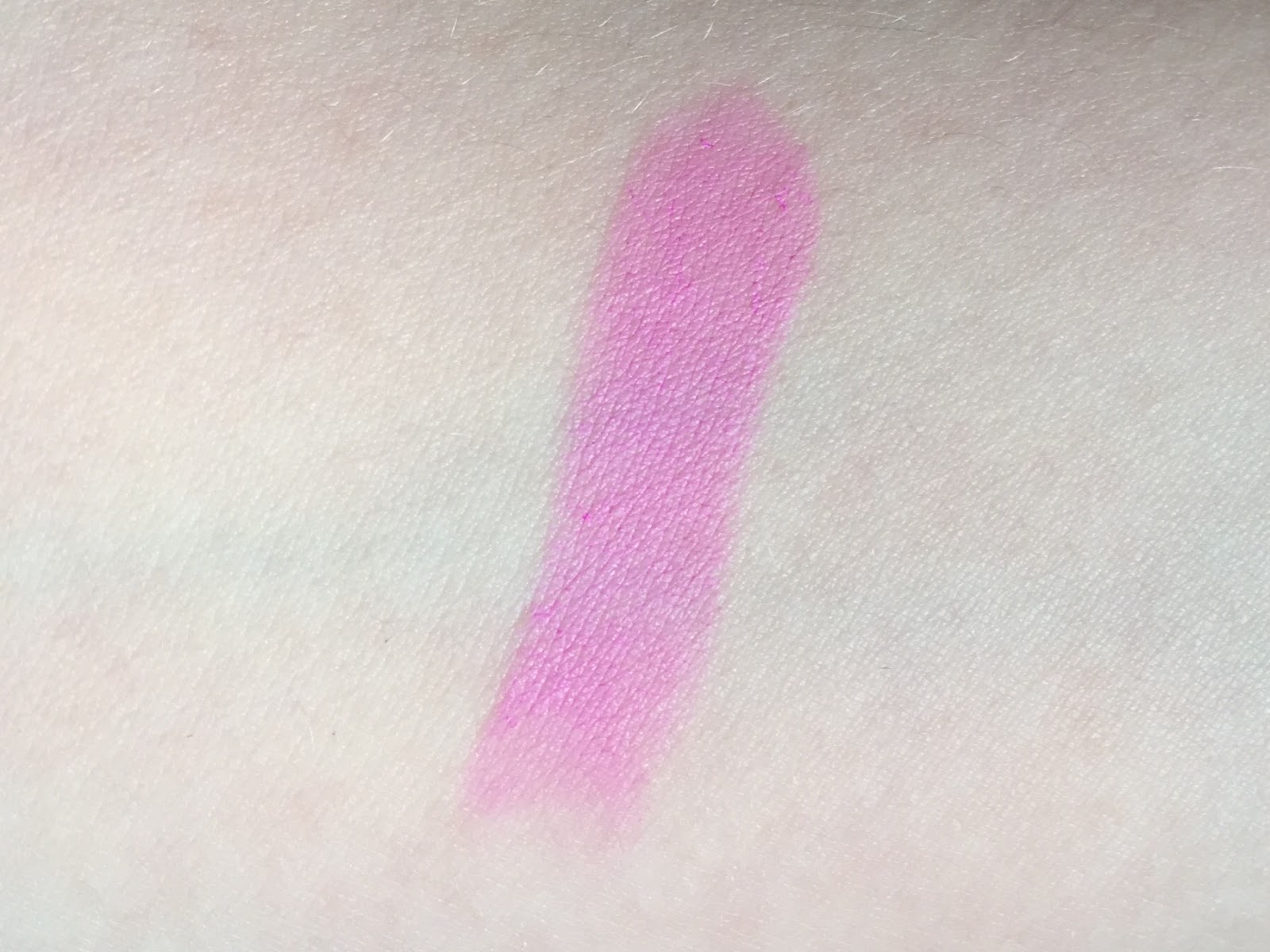 Not having swatched Plastique in the store, I worried that it might be too similar to some of my other pinks, especially MAC Pink Nouveau. (Plastique is a very MAC-esque color, isn't it? It reminds me of those delightfully trashy pinks like Snob and Saint Germain.) I was surprised to discover that Plastique and Pink Nouveau were nothing alike, as witness comparison swatches. Left to right: Pink Nouveau, Plastique, Maybelline Lilac Flush, and MAC Candy Yum-Yum. 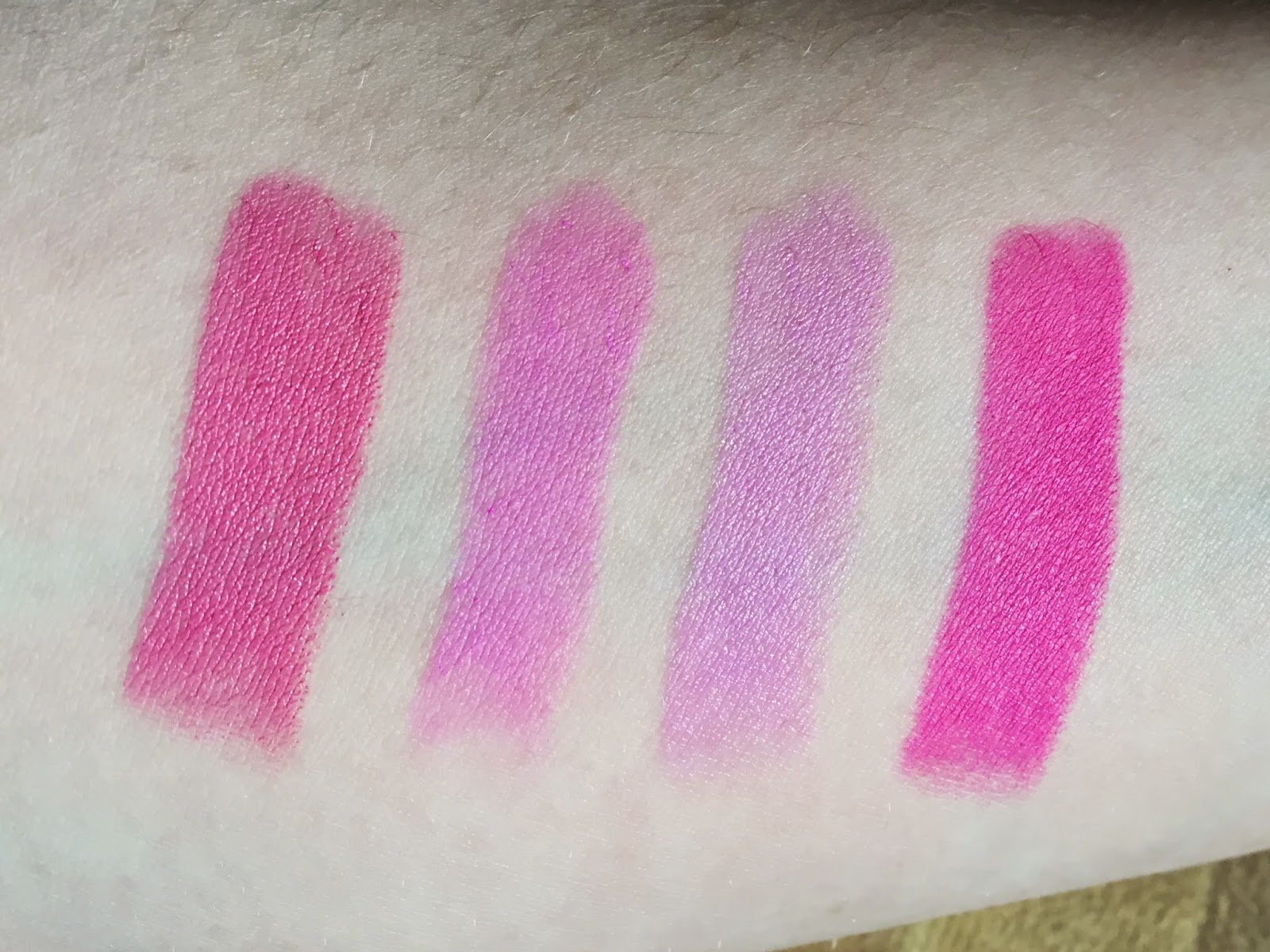 Compared to the white-based Plastique, Pink Nouveau is darker and rosier. The real resemblance here is between Plastique and Lilac Flush, though Plastique is decidedly pinker.

Plastique on my lips. That chilly neon glow may not be flattering, but it's fun to feel like I'm blinding people with the girliest laser beams ever. Maybe that would be my superpower, were I an '80s comic-book villain. LIP BEAMS ACTIVATE! SHAZAM! I assume that's what comic-book dialogue is like.

Lipstick longevity means very little to me (unless the lipstick vanishes in, like, half an hour), so I don't mind that Plastique wears off a bit with eating and drinking. It doesn't have the impressive staying power of Get Me Bodied, but I didn't expect that it would: it's a much lighter shade. Despite its matte finish, Plastique is lightweight and non-drying, two qualities I value much more than extended wear. There's almost always a trade-off between wear time and comfort, and I have no problem sacrificing an hour or two of wear for happy lips.

I've been wearing Plastique a lot in the last week. The bright lavender-pink puts me in a happy springy mood, and it works surprisingly well with a variety of looks. Here's a full face with your standard mod-inspired gray-black matte eye: With a pastel eye experiment and my magical invisible Tony Moly lavender blush: Close-up of the eyes. From the tear duct outward, that's Kiko 251, ColourPop Krinkle, and NARS Lhasa on my upper lids, all layered over Maybelline Tough as Taupe, and NARS Habanera on my lower lashline. It's spring, you guys!

And just for fun, my first two-toned lip look ever: Lilac Flush on the outside, Plastique in the center. Unfortunately, the colors are so similar that it's hard to tell I've done anything unusual with my lipstick--and the photos below represent two separate attempts. Womp womp. 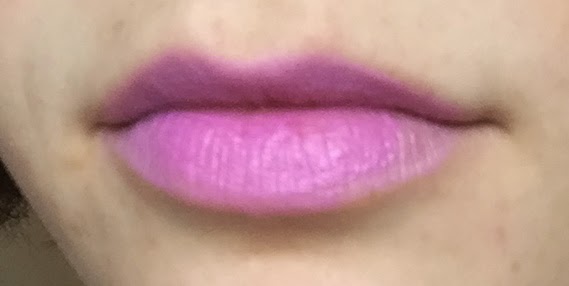 I'm glad I got my hands on Plastique when I did, because it seems to have disappeared from the Topshop and Nordstrom sites since last month, and the only Matte Lip Bullet still available is Could This Be Love. If you missed out on Plastique, I wouldn't worry--it's a fairly dupeable color, after all--but I do hope Topshop brings back the Matte Lip Bullet formula for another season! It's my favorite matte formula to date, and I've tried a fair few.

I don't have a snappy conclusion for this post, so I'll end with a completely unrelated note: I'm celebrating National Poetry Month on Instagram by posting one short poem or excerpt per day. Check it out if the mood strikes!
Posted by auxiliary beauty at 6:16 PM