Until recently, teal was one of my least favorite colors. It unsettled me in the same way that fuchsia used to: both are amphibious, ill-defined colors. But one swipe of fuchsia lipstick in the summer of 2011 banished my unease forever, and I've just experienced a similar conversion to teal. It started when I looked at swatch photos of Essie's Spring 2015 collection and found myself drawn to Garden Variety, a bright, blue-leaning teal creme. I almost bought it, but I decided to look for a cruelty-free version instead, despite my usual aversion to dupe-hunting. Serendipity, in the form of Teresa's Instagram, put Sephora Formula X Enigma on my radar, and I bought it during a brief trip to New York last weekend. As a bonus, it matched the dress I was wearing that day: 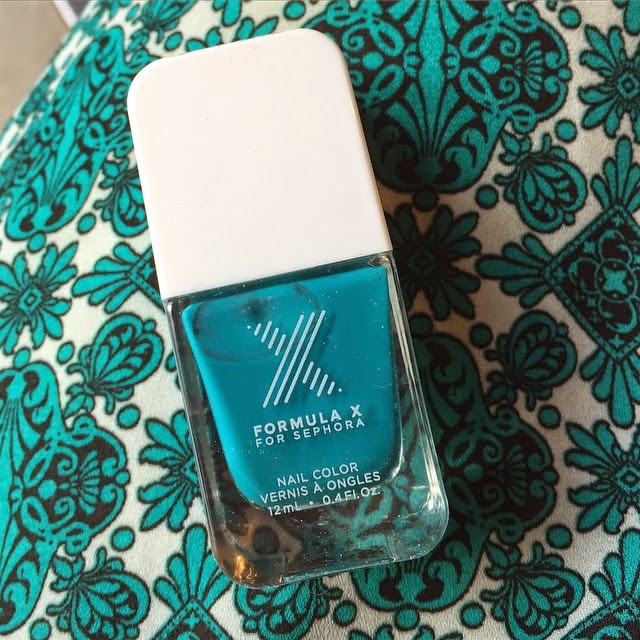 (FYI, though Sephora claims that the Formula X brand is cruelty-free, it does appear to be sold in China. Whether or not that destroys its cruelty-free status depends on your personal stance on the issue.)

I have no idea how this polish got its name, and I wouldn't be surprised if it resulted from an intern picking sexy-sounding nouns out of a hat, but there really is something enigmatic about Enigma. In some lights, it's a bright, juicy color; in others, it's more subdued. In natural light and in photos, it leans more blue; in artificial light, it leans more green. Like its owner, it's perpetually suspended between Ravenclaw and Slytherin. 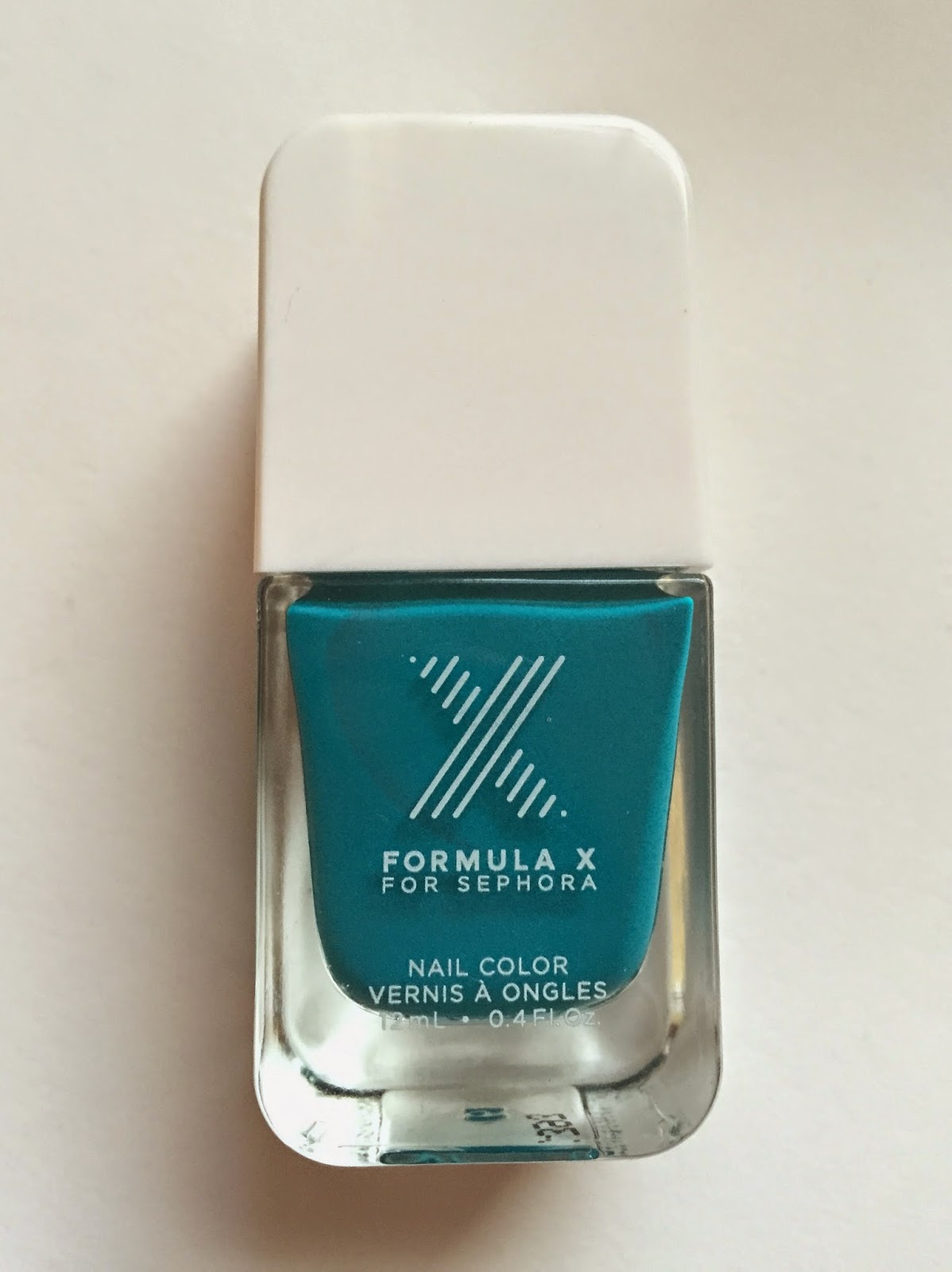 I expected a color this bold to be powerfully pigmented, so I was dismayed when the first coat of Enigma revealed a semi-sheer jelly texture. It was a dream to apply, though: self-leveling and quick-drying. Two coats produced near-total coverage, but being a stickler for opacity, I applied three. 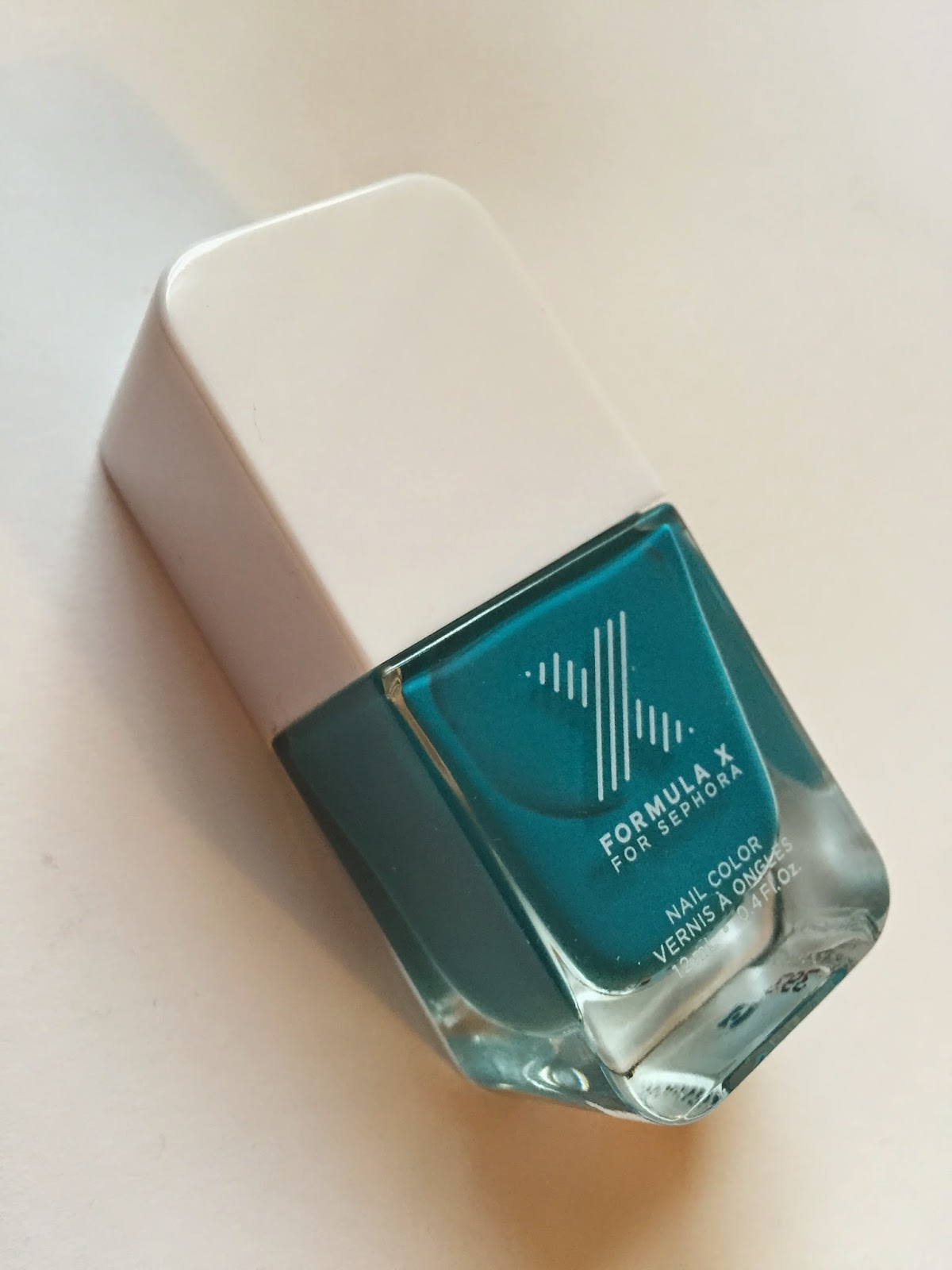 These photos make the color look a bit softer than it actually appears. Try as I might, I couldn't capture the brightness that Enigma takes on in natural light. Equally enigmatic was Enigma's ability to draw other teal objects into its orbit. R. C. Bald's biography of John Donne, for instance: 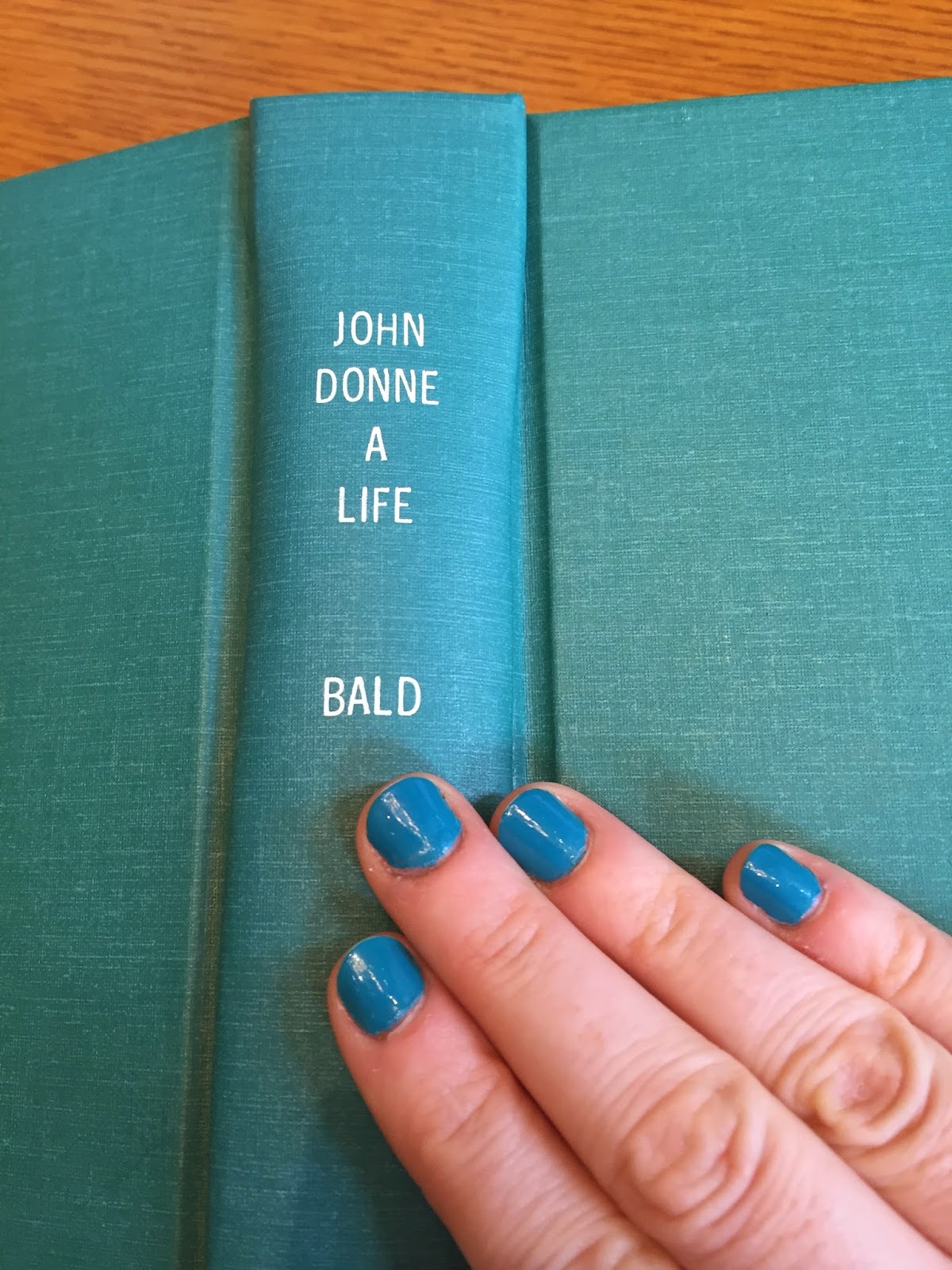 And the rental car that my friend Megan and I used to go grocery shopping: 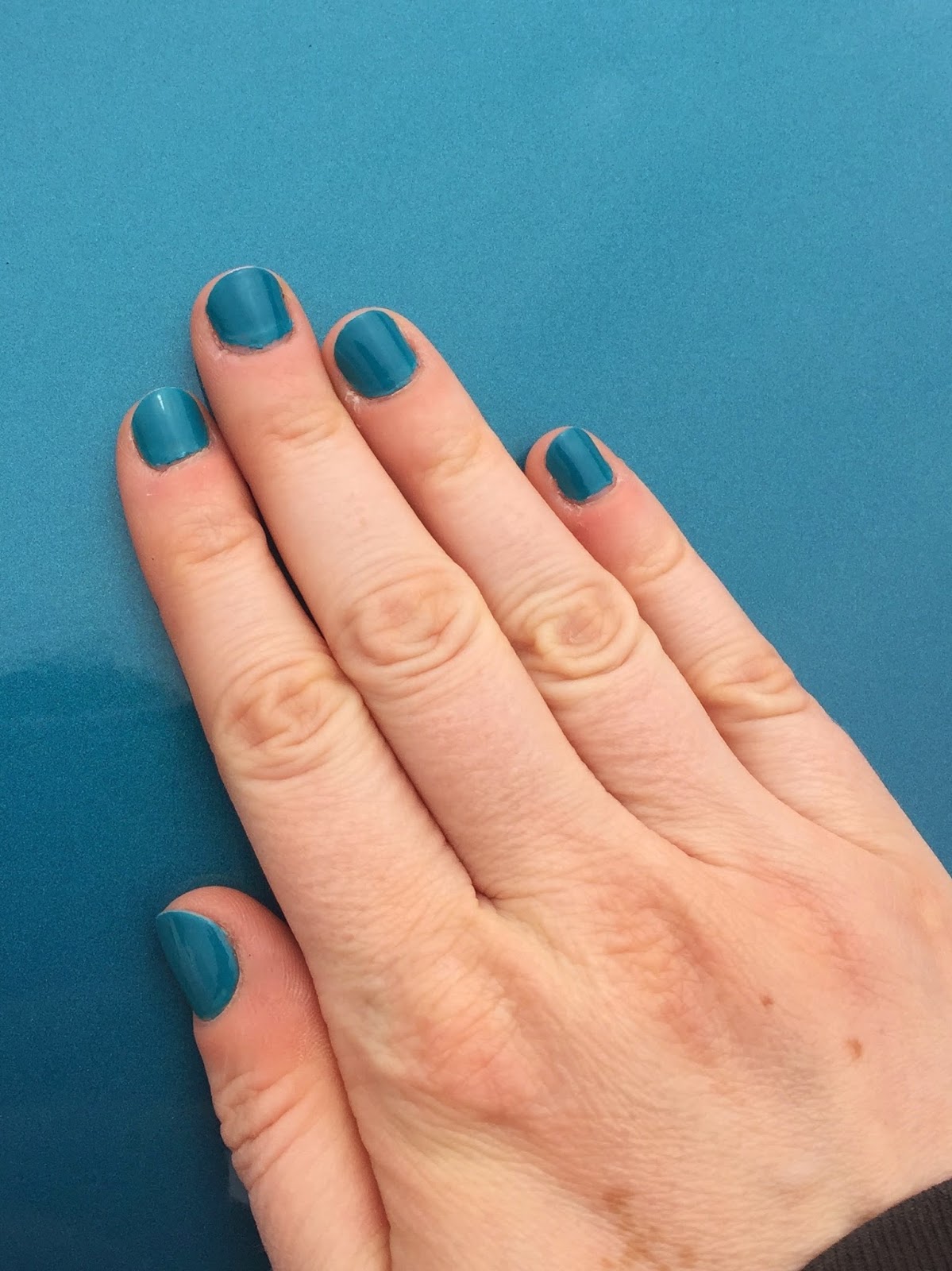 I'm afraid I didn't think to take a classic fingers-wrapped-around-bottle blogger shot of Enigma, but I can testify that the color doesn't change from bottle to nails, as other polishes occasionally do.

What really impressed me about Enigma was its longevity. I applied it on Monday evening, and it didn't chip until Friday afternoon. There was some very minor tipwear before then, but nothing noticeable at a glance. By my standards, this is insanely good. I've mentioned before that polishes usually chip on me within two days, so wearing a polish that lasted twice as long was a revelation. Is this how normal people experience nail polish? Because it's pretty great. (By the way, I've noticed that my deep blue polishes tend to be longer-lasting: Zoya Neve and OPI Eurso Euro also have good wear time. I wonder if this is a coincidence, or if some component of the blue pigment contributes to the longevity of the formula?) 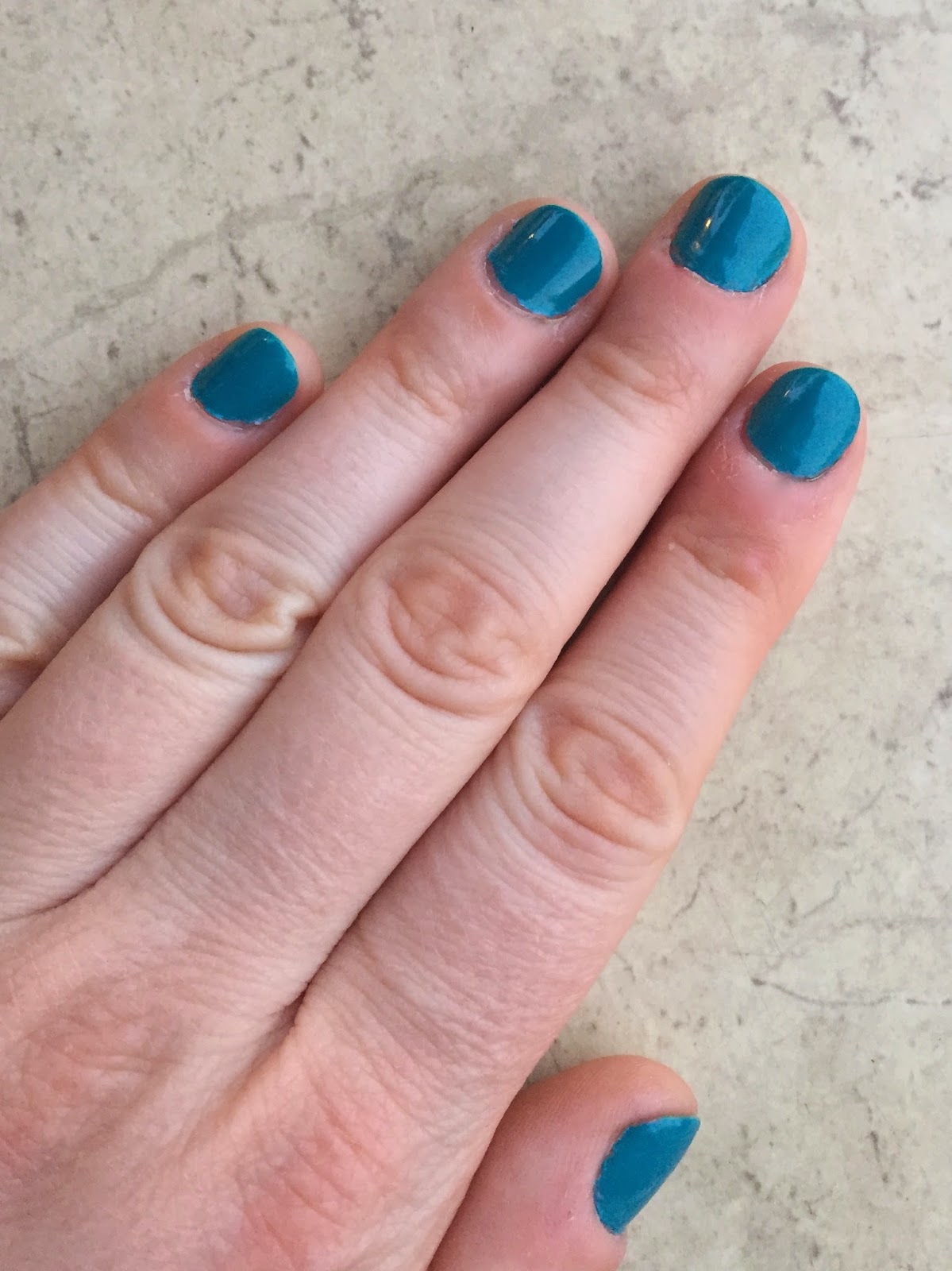 Enigma is my first Formula X polish, and I'm happy to report that it lived up to the brand's good reputation. Will I branch out into teal eyeshadow next? I confess, I'm tempted.
Posted by auxiliary beauty at 1:02 PM