Before starting this post, I spent a long time five minutes trying to come up with a good simile for the operation of material desire online. The Internet engenders small cravings, then quickly magnifies those cravings until you can't imagine a time when you didn't want X nail polish or Y lipstick, even if you first heard about it only three days ago. Could we call it a whirlpool of desire? A long street strewn with bits of grass that gradually form themselves into tumbleweed, and the tumbleweed is your longing for a certain product, and the wind is peer pressure or something, and--never mind.

Maybe I should illustrate this process with an example, instead. A few months ago, I read this article and became fixated on the lavender-pink nail polish in image 5, which turned out to be Chanel Sweet Lilac. This made me aware that I didn't own a light pink polish; the last one I'd bought was Essie French Affair in spring 2011, and that had long since turned gooey and gone to the Undying Lands of nail polish. Here I sternly reminded myself that I was slipping into a bad habit: identifying a color/texture/finish lacuna in my makeup collection and, instead of thinking, "Hmm, maybe I don't own that because I don't really like it," deciding that the gap must be filled immediately. I don't have a lot of pink or red nail polishes, but I rarely wear the ones I do have, gravitating instead to my purples and blues and greens. Pink or red nails make my hands feel like someone else's. Knowing this about myself, I waited a few weeks to see if the desire for a pale cool pink would subside, but it only got stronger. My brain loves undertaking quests for the Platonic ideal of a certain color: the pale pink polish, the fuchsia lipstick. I was doomed.

For a while, I was certain that I wanted OPI Mod About You, a white-based pastel pink. Then Ulta announced that as part of its 21 Days of Beauty sale, Butter London polishes would be marked down from $15 to $9 on a certain day in March. Butter London is one of my favorite polish brands, and it's unambiguously cruelty-free, so I decided to narrow my search to that brand. First I shifted my affections to Butter London Teddy Girl, which looked identical to Mod About You...but it had received mixed reviews. So I settled on Fruit Machine, a not-quite-pastel cool pink that was remarkably similar to Sweet Lilac, and suddenly I couldn't imagine ever having wanted another pink polish. This was it, this was the one, even though I'd never seen it in person. My brain terrifies me sometimes. I also tossed into my cart a polish that I really had wanted for years: Trout Pout, a soft coral. So here we are: 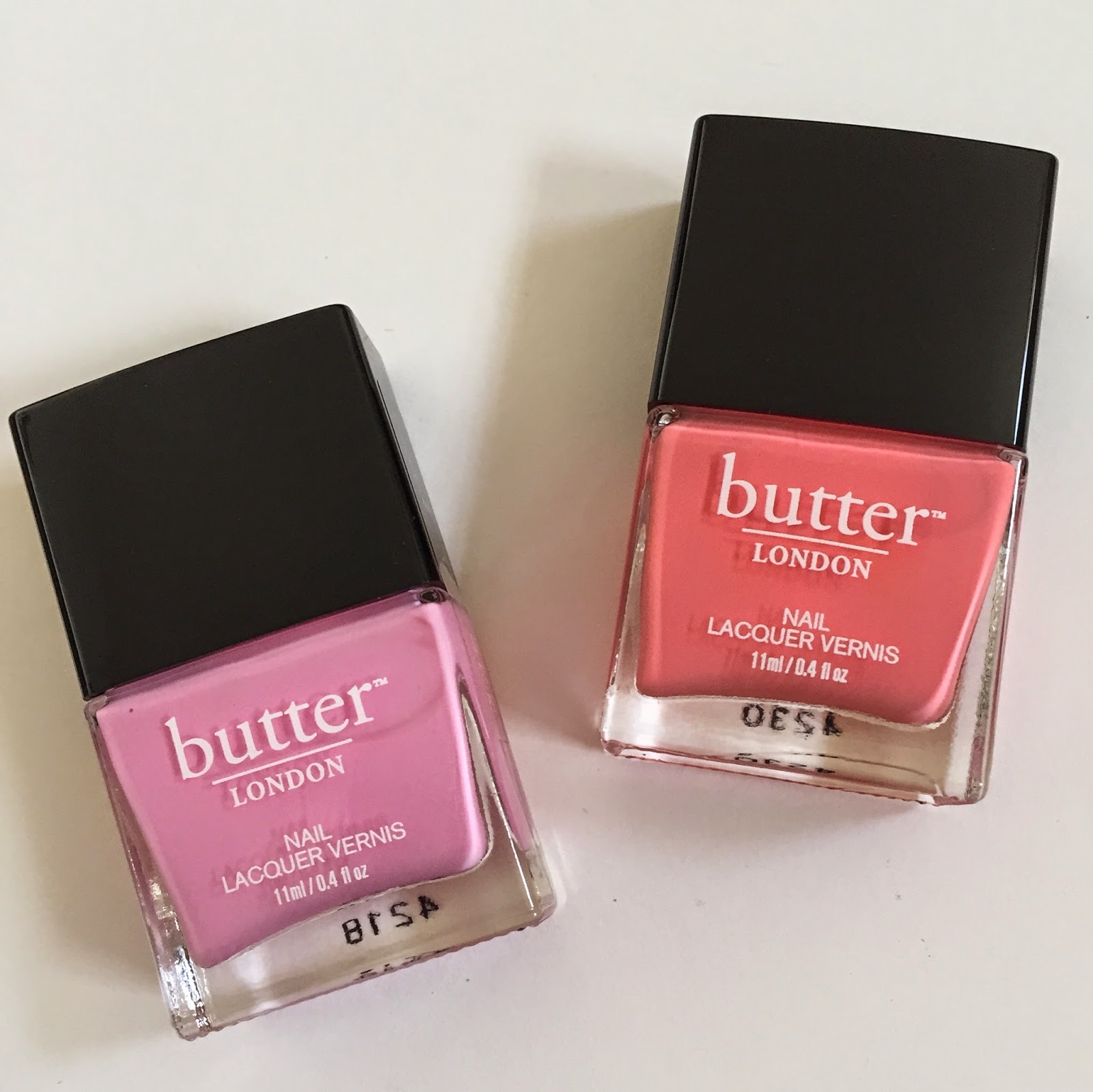 They look so pretty together, don't they? I like to arrange my nail polishes by color, but I can't bear to keep these two apart. I can't think of happier, springier colors. I also noticed that each one paired perfectly with a lipstick I've been enjoying this spring. Here's Fruit Machine with Topshop Plastique: 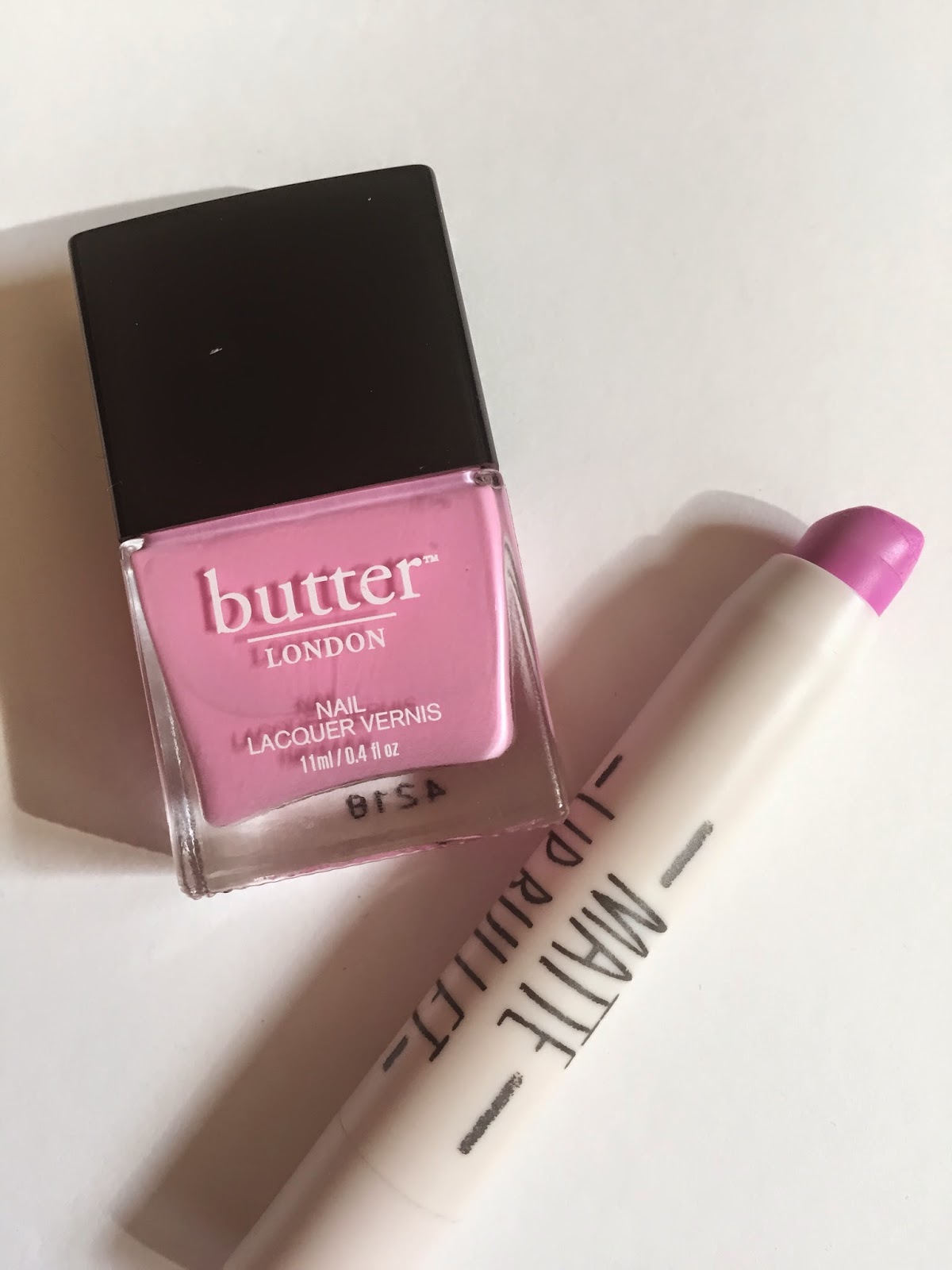 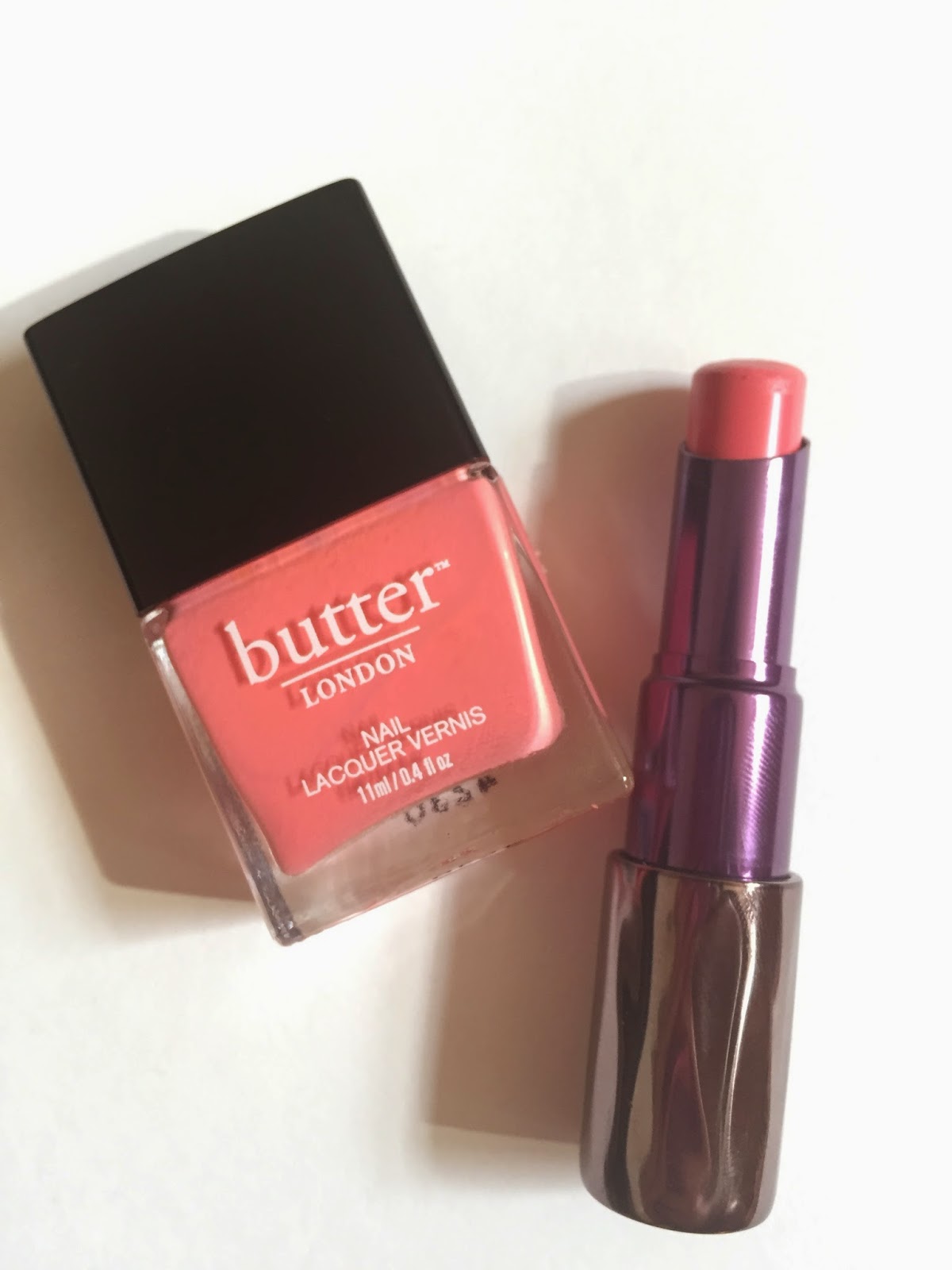 The first one I applied was Trout Pout. The formula is on the thin side and went on a bit streaky, but it dried quickly and was opaque in three coats. Unfortunately, the color changed slightly on my nails: it looked like a faded melon shade in the bottle, but it became a brighter, deeper coral pink once applied. Still a lovely color, but not quite what I was expecting. 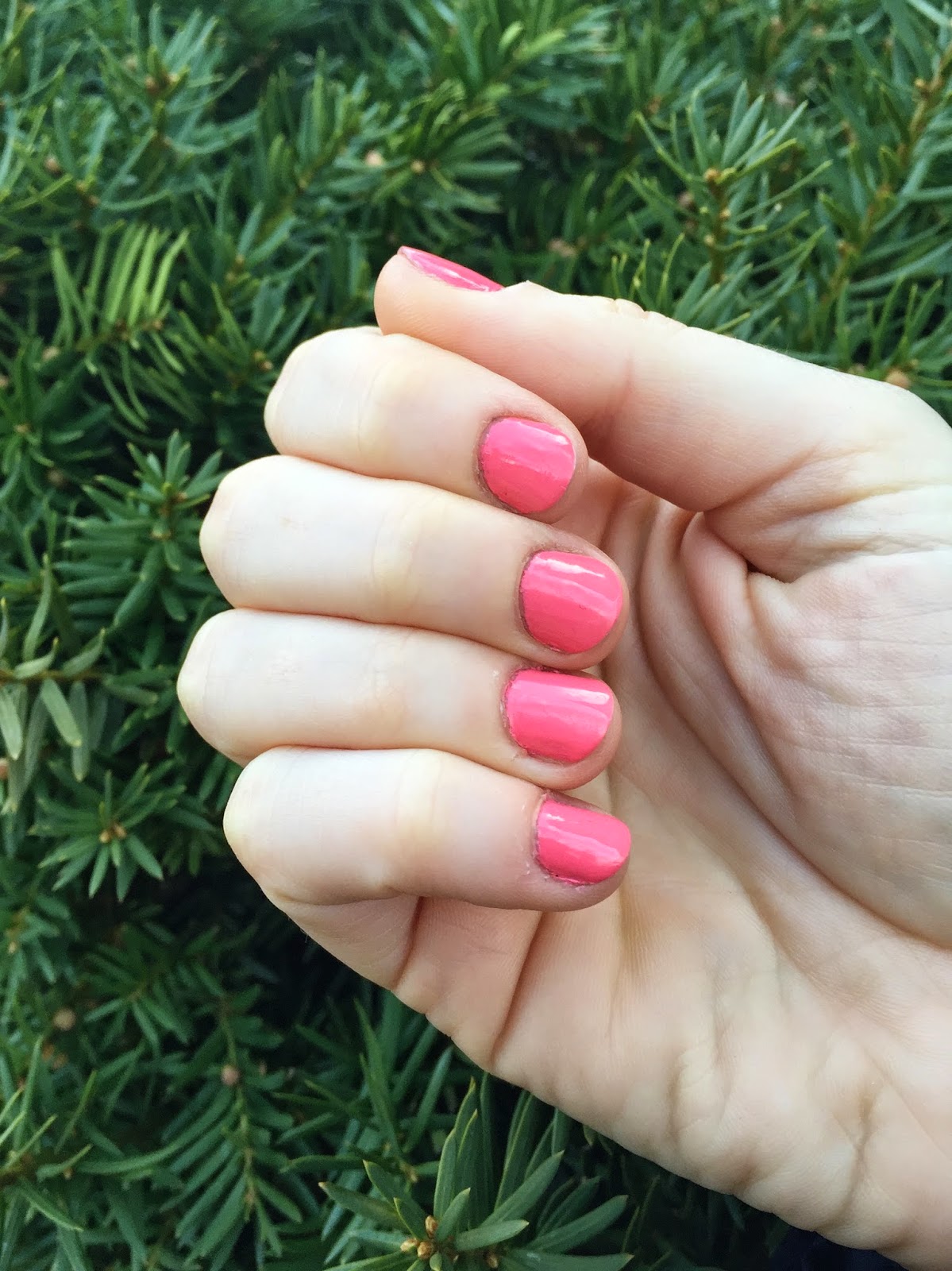 It didn't last long, either: I noticed chips after a day, though I should mention that almost no polish stays pristine on my nails for more than two days, which probably disqualifies me from nail blogging. If any polish lasts for three days or longer, it's a freaking miracle of cosmetic chemistry. I swear I'm doing everything right: making sure my nails are smooth and dry, applying base coat and topcoat, waiting for each layer of polish to dry completely before adding the next. I've even begun using Seche Vite topcoat, despite the revolting chemical smell, but I've seen no improvement except a quicker drying time. Short-lived manicures just seem to be my lot in life. Which would be fine, except that a review of nail polish really should include a note on longevity, and Trout Pout will almost certainly last more than a day on you even if it doesn't on me.

The lighting is a bit wonky here, but see how Trout Pout is juuust a bit more intense on the nails than it is in the bottle? 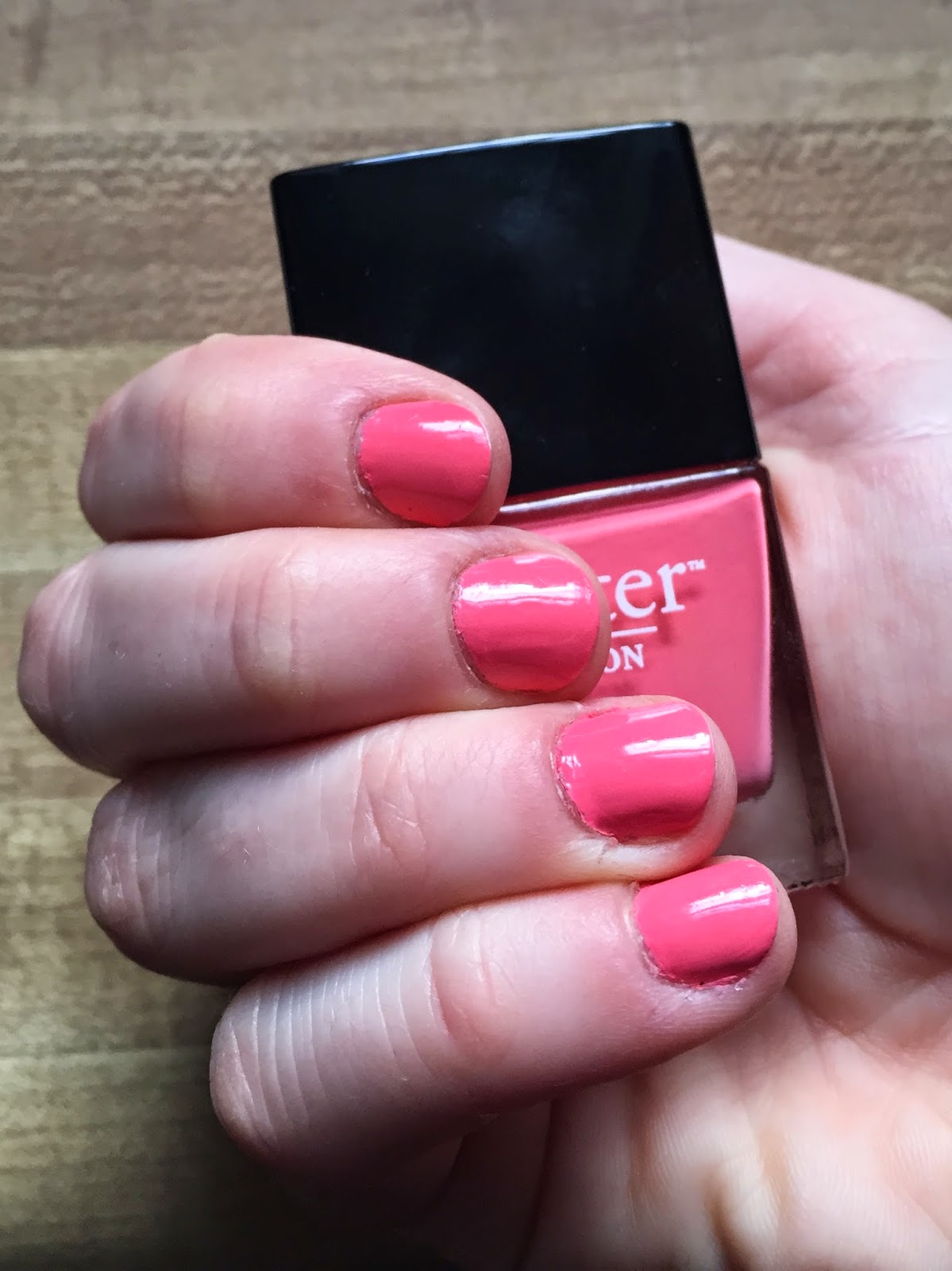 Next up: Fruit Machine. I love this one, guys. Why do I fall so hard for specific colors? I have no idea. I've been wearing Plastique almost every day for the past two weeks, too. 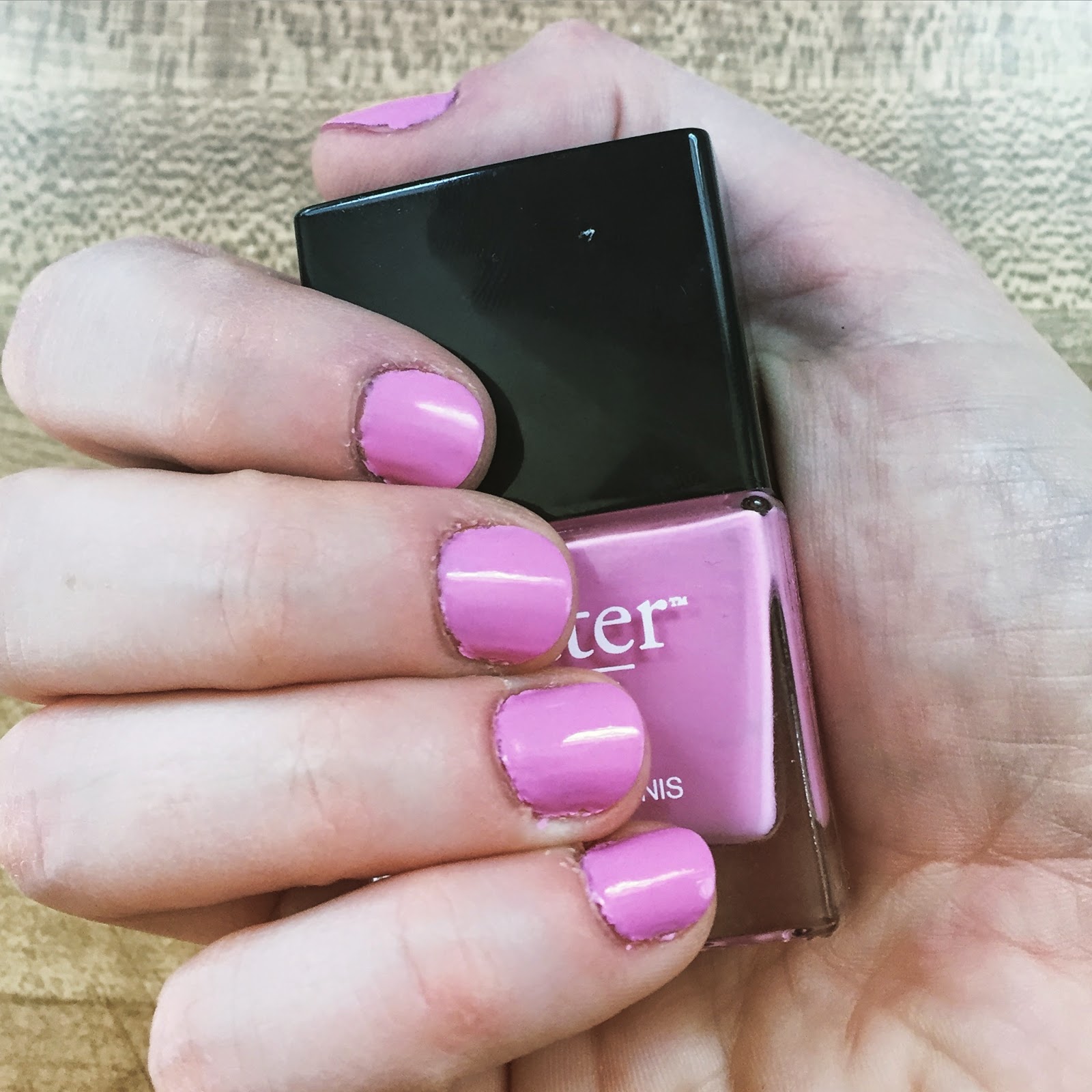 Fruit Machine has a similar formula to Trout Pout: opaque in three coats (though it applies more smoothly) and quick-drying. I'm actually waiting for Essie Fashion Playground to dry as I type this, and I'm struck by how much longer it takes in comparison to the Butter Londons. Fruit Machine is slightly longer-lasting than Trout Pout, but I do find that it starts to chip within two days. Again, this is normal for me, which makes me think that it will probably wear normally on anyone else. 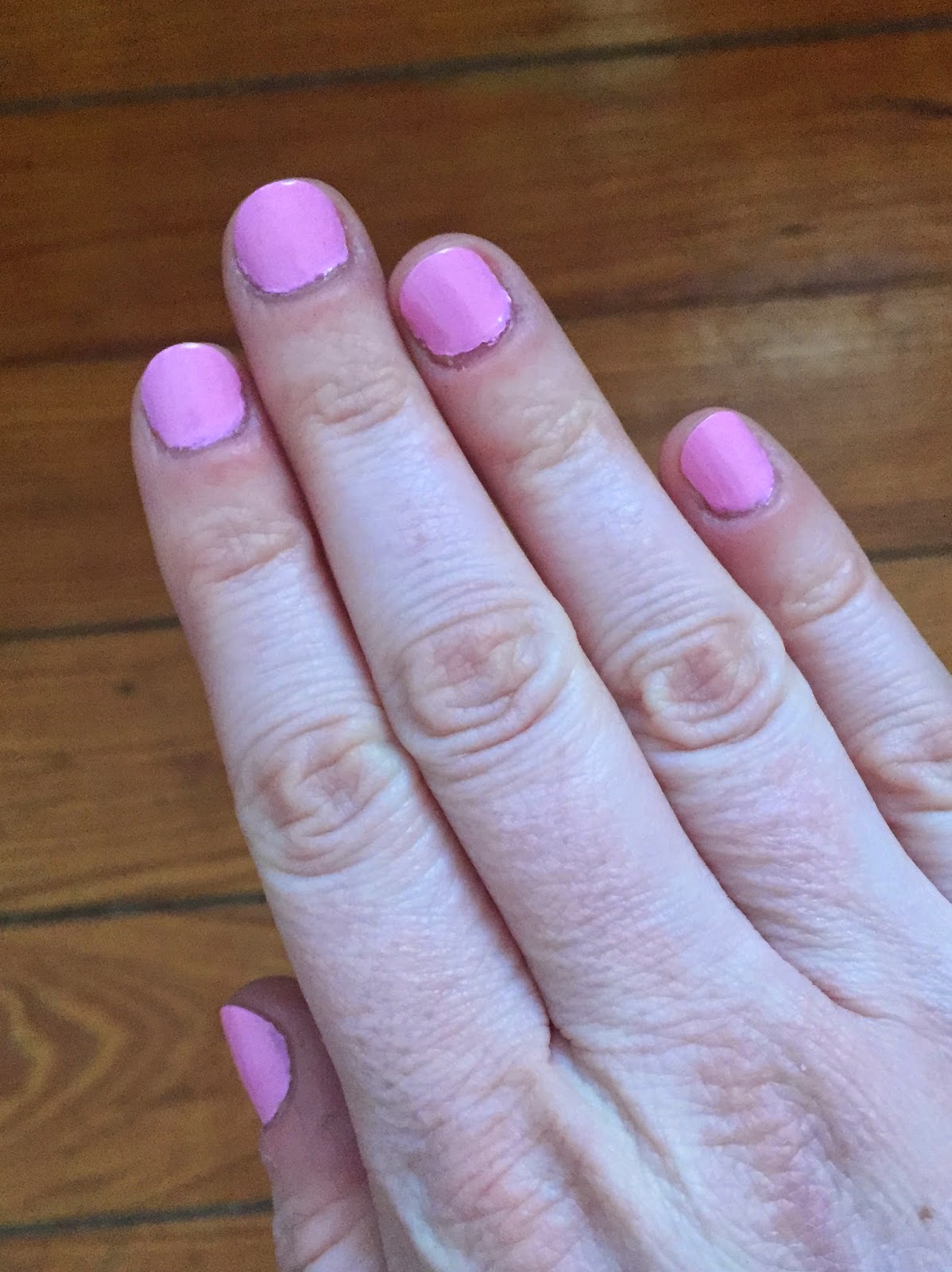 And if you care about dupes, Fruit Machine looks very close to Sweet Lilac--perhaps a bit less muted. Yeah, I have a lot of photos of my Fruit Machined hands on my phone. Here's how it looks outside, in indirect sunlight: 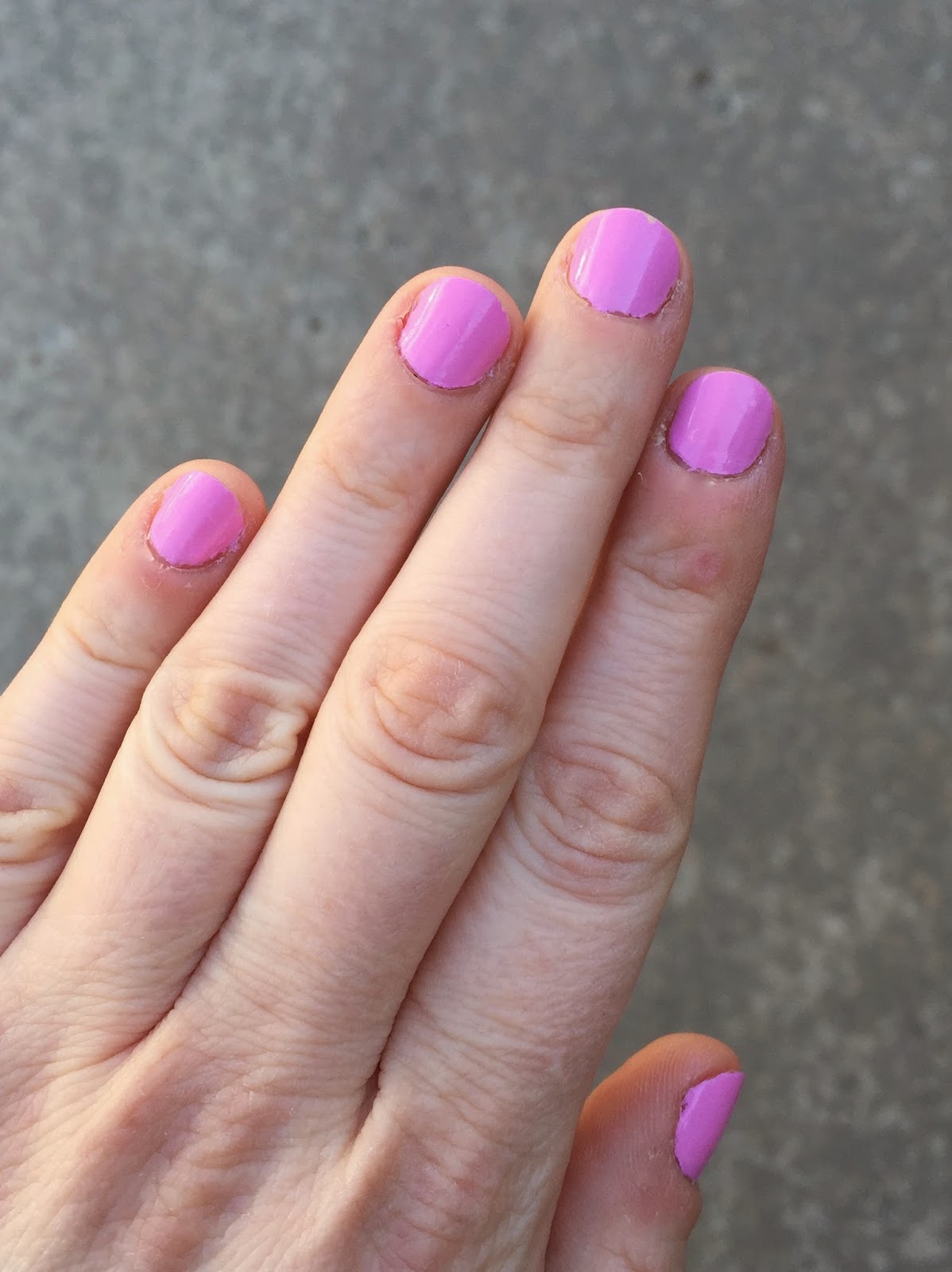 By the way, a "fruit machine" is a slot machine--so called because some of them have pictures of fruit. None of that fruit is pink, so far as I know. Go figure.
Posted by auxiliary beauty at 9:03 PM