Many thanks to everyone who gave me Canadian beauty advice! As it turned out, I bought three beauty items in Toronto, none of them from a Canadian company: an American Apparel nail polish, a Face Shop sheet mask, and an Inglot custom eyeshadow duo. 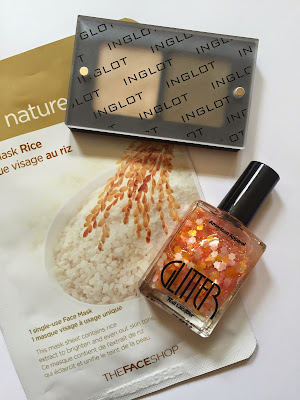 I almost never wear glitter topcoats, but I made a (possibly unwise) exception for AA's Daisy Field. I'm glad I live in a world where one can wear blossom-shaped glitter on one's nails. 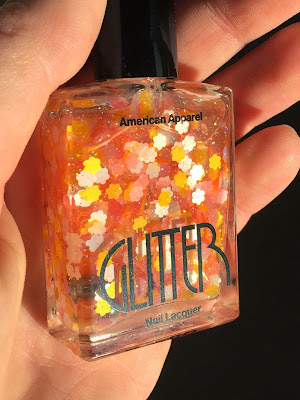 I'm very pleased with the Inglot duo, which comprises a pale gold and a dark greenish gold (it looks olive here, but it's much yellower on the eyes). Expect a review soon! 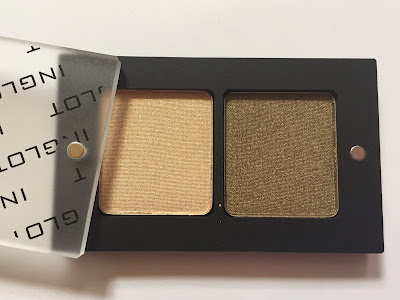 Those of you who commented on my last post seemed to agree that there's not much difference between Canadian and American beauty offerings, except that Americans have it easier price-wise. By and large, I found this to be true. There's far more overlap between CVS and Shoppers Drug Mart than there is between, say, CVS and Superdrug or Boots. I did hope to track down some Joe Fresh lipstick or nail polish, but the brand was curiously elusive. It's sold only in Loblaws and dedicated Joe Fresh stores, neither of which I happened upon during my 48 hours in Toronto. But I got my hands on some Canadian makeup nonetheless: when I met up with Liz for brunch and some beauty shopping, she kindly passed along a bag of goodies that included a few Canadian products, like a Joe Fresh nail polish and an Annabelle eyeshadow trio. 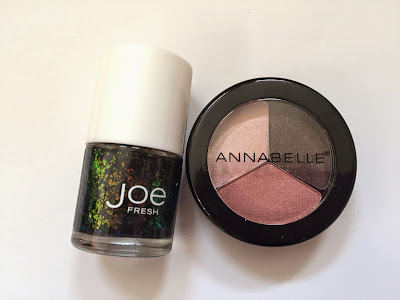 Thank you, Liz, both for the makeup and for being a delightful brunch-and-Inglot companion. <3 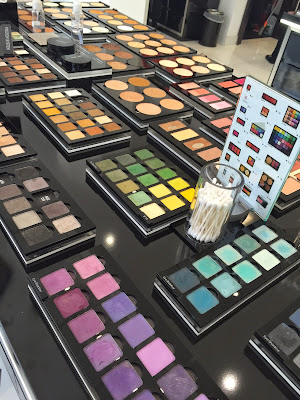 Speaking of brunch, I was very impressed with the food in Toronto. Standouts included squash fritters and tofu pad Thai at Khao San Road, an insanely popular Thai restaurant (our wait time was an hour); eggs and smoked salmon on a cheddar biscuit at the Queen and Beaver Pub; and, at Woodlot, a dinner of nesting-doll dishes. You know: those dishes that look simple but feature so many components that you have to glance back at the menu periodically while eating to remind yourself what you ordered. In my case, this was (I quote from the menu) a "Clash of Kings" cocktail ("Lazzaroni Amaretto with Angostura 1919 rum/aromatic bitters and wild cherry"); "shiitake and smoked potato sourdough ravioli with balsam fir butter, mushroom cider glaze, dandelion and parmesan"; and "super dense chocolate cake with passion fruit curd, toasted coconut marshmallow and mint." Jesus. 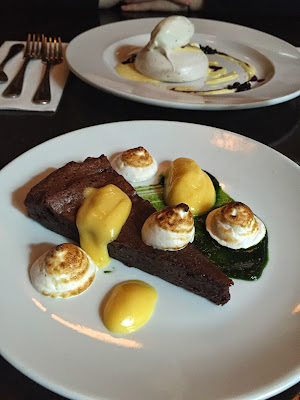 Did the balsam fir butter make a difference? Did it matter that it was mushroom cider glaze and not just cider glaze? Hard to say, but everything was delicious. I especially loved the cocktail (all the drinks had incongruous Game of Thrones-themed names), but I failed to take a photo because I am a bad blogger and a worse Instagrammer. Suffice to say that I should use amaretto in my homemade cocktails more often.

Of course there were simpler culinary pleasures, too, like my first Tim Hortons donut, eaten while hastily revising my conference paper: 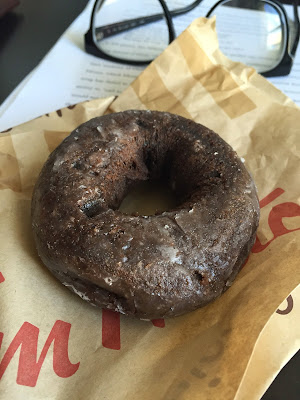 And a mimosa and bowl of oatmeal from the O&B Canteen, where I had post-conference brunch with the other presenters on my panel. The menu promised apple preserves as a topping, but I got peanut butter and banana instead. This would have been a problem if I were allergic to peanuts; luckily, peanut butter is one of my favorite oatmeal toppings. A good friend once described herself as living "a very, very cinnamon-oriented lifestyle"; I feel the same way about peanut butter. 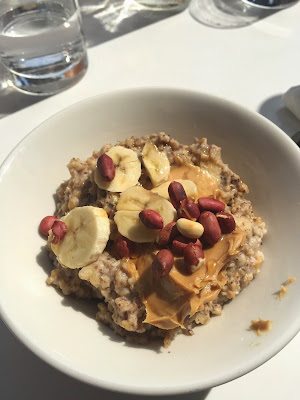 This was a great weekend on pretty much all fronts. The weather was perfect, we ate delicious food with friends old and new, I heard a k-pop song playing in public for the first time in my life (a song by one of my favorite girl groups, no less), and I got to investigate some of the distinctive Edwardian brick architecture along Palmerston Boulevard. 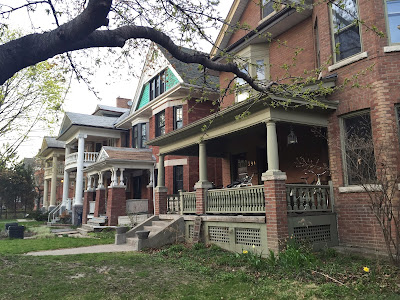 This house had three balconies and a crenellated tower: 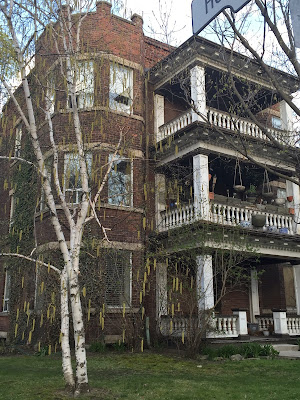 One of Palmerston's cross streets is Herrick, which caused my boyfriend and me to geek out and take photos of each other next to the street sign, because we both love Robert Herrick. I assume the street is named after a different Herrick than the author of the Hesperides, but who knows? (I'm sure someone knows.) 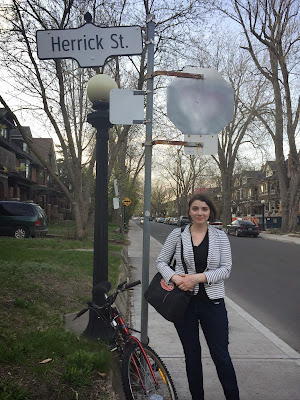 Since coming home, I've been sorting out various things (a chapter draft, a summer job, housing for next year), so I haven't had much time for blogging. I predict that the blog will be pretty quiet for the next week or two, as well: I'm flying to the UK on Tuesday and have a lot to do before then! I'll review my Inglot duo in the next few days, though, and continue sampling my way through the makeup that Liz gave me. I'm currently wearing Butter London Bossy Boots, a beautiful pistachio green with a hint of gray: 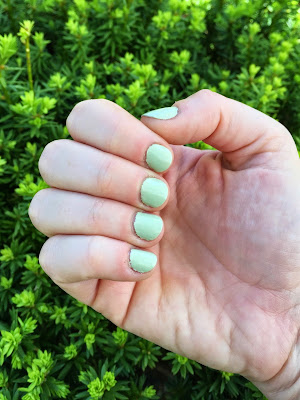 As you might be able to tell from the quality of the light, summer arrived almost without warning--much like the end of this post. See you soon.
Posted by auxiliary beauty at 8:32 PM