In the last couple of weeks, I've been a bad early modernist: I've watched the BBC miniseries of Hilary Mantel's Wolf Hall without first reading the books. I did start reading Wolf Hall two years ago, but I just couldn't get into it, despite my childhood obsession with Tudor history. There's something about grad school that makes one averse to novels set in the time period one studies. (My own research interests lie in Stuart, not Tudor, England, but the early 16th century is close enough.) However, I didn't have any trouble getting absorbed in the BBC version, not least because of its aesthetic richness. The indoor scenes are filmed in deep shadow to evoke an era before electricity. The costumes and hairstyles make me feel like I'm watching Holbein portraits come to life (indeed, Holbein makes a cameo in the fourth episode). And while the makeup is historically accurate, i.e. barely there, I can still find beauty inspiration in the colors that the characters wear. The standout shade for me is Anne Boleyn's signature greenish yellow, a cross between mustard, chartreuse, and bronze. Ignore the reflection of my melon head below. 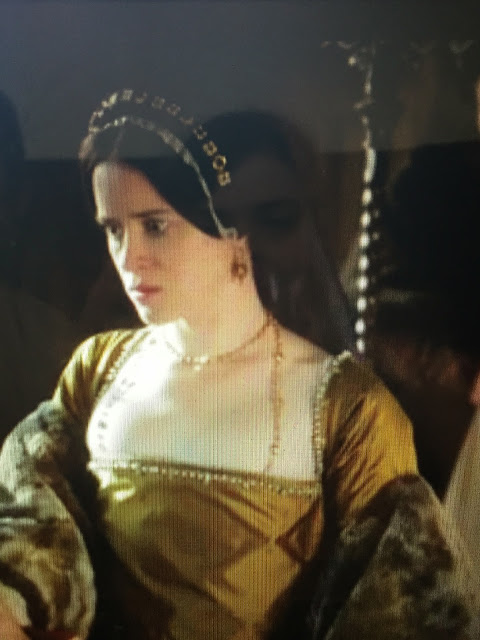 You can find this color and its relatives in a number of Renaissance paintings, including Holbein's 1540 portrait of Henry VIII: 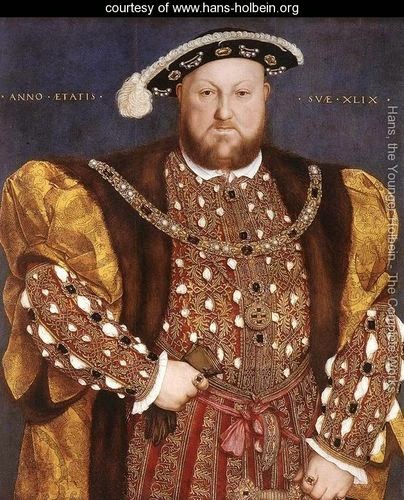 My love for old gold, or whatever you want to call it, is nothing new. NARS Paramaribo has been on my eyeshadow wishlist for well over a year, and Rouge Bunny Rouge Abyssinian Catbird recently joined it, thanks to Belly's RBR roundup post. Most shades of yellow do my complexion no favors, but yellow with hints of brown and green can be surprisingly flattering. Look how well the shade suits another pale, cool-toned, brunette AB: 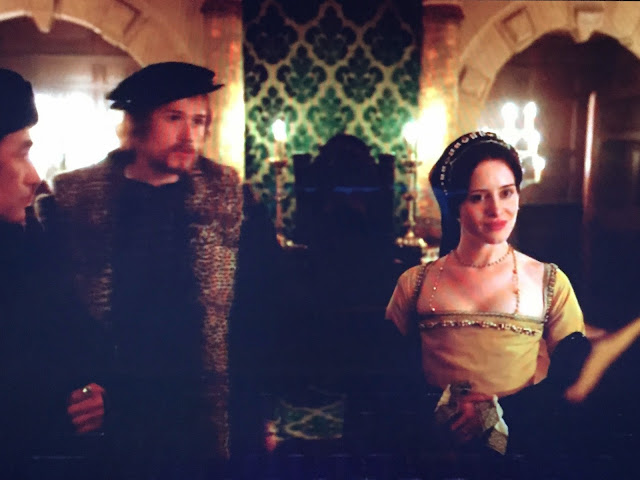 So it's no wonder that on my trip to Toronto's Inglot store with Liz last week, I gravitated toward the antiqued-looking olive-gold #433, though not after a good deal of heart-eyed browsing. Despite its small size, the store was overwhelming. So many eyeshadow and blush and lip palettes to be created! 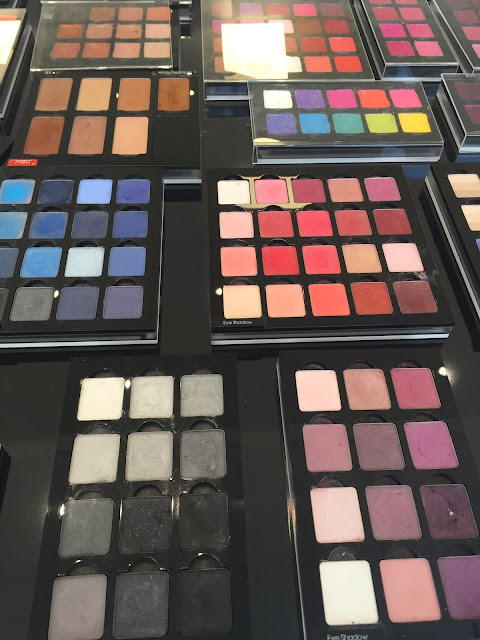 I almost emulated our beloved Sylirael, who went for a blue-purple lipstick duo on her visit to Dubai's Inglot store, but I've been trying very hard to limit my lipstick purchases this year. In fact, I haven't bought a lipstick since Milani Matte Naked in late February--and if I've received another as a gift since then, well, that wasn't my fault, even if I did request it. And lip liners and glosses don't count as lipsticks, right? Right. Time for a paragraph break!

Anyway, I opted for an eyeshadow duo instead. (Liz displayed more restraint and bought a single taupe shadow.) Inglot's "Freedom System" requires you to buy a palette separately from the makeup you want to put in it. I paid $9 CDN for the empty duo palette and $10 for each shadow, which came to $24 USD: not cheap, but $11 less than a NARS duo. (In the US, each shadow is $7 and the palette is $8: you Canadians are right that Americans have it easy.) If you want the makeup itself, you get a lidless metal pan, which can be inserted into a Z Palette or whatever. This is ideal for serial depanners, but I found it a bit annoying, since I don't own a magnetic palette and had no choice but to buy the Inglot palette to hold my shadows. Oh well, the experience of choosing the colors was worth the extra $9. After much dithering, I settled on #433 and, as a highlight shade, pale gold #08. (I own almost no highlight shades and dislike the ones I do own, like the frosty white and bright yellow-gold in theBalm's Nude 'tude palette.)

Here are all the components in their boxes: 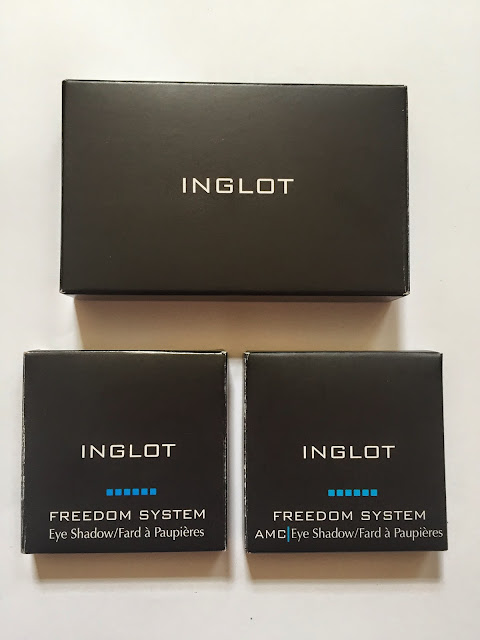 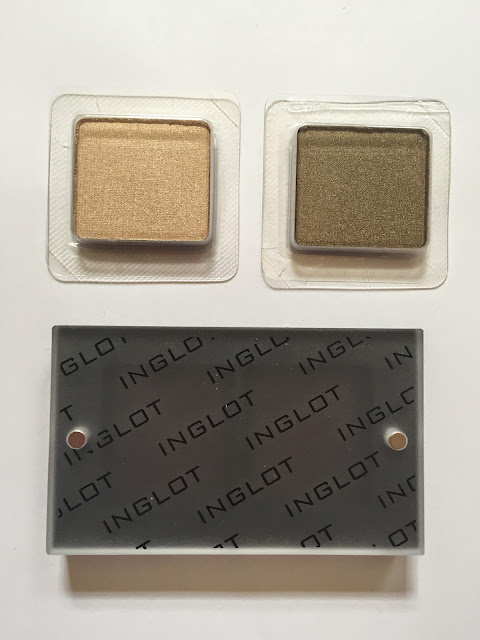 And nestled in the palette: 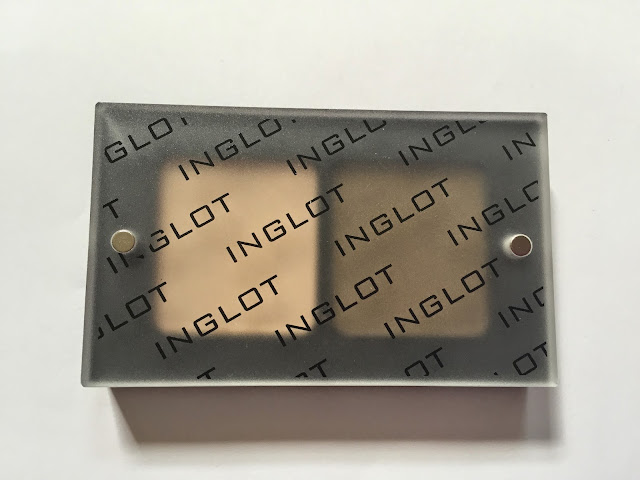 The lid is held to the pan with those two tiny magnets. This arrangement looks nice but doesn't feel terribly secure. I wouldn't travel with this duo unless I held the lid in place with a rubber band or hair tie, and even then I'd be wary. To access the shadows, you must either remove the lid entirely or use one of the magnets as a hinge, like so: 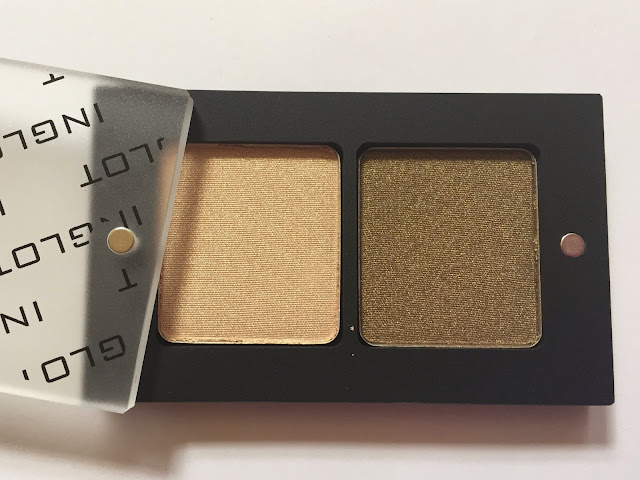 I am a spastic, clumsy individual in general, and I always experience a twinge of fear when I start to push the lid to the side. I am 90% sure that at some point in the near future, my hands will shake while I'm reaching for the palette and send the eyeshadows, pan, and lid flying every which way. For now, though, let's leave the realm of paranoia and enter the realm of product photos.

Here's the duo in sunlight, which makes 433's olive tones come through: 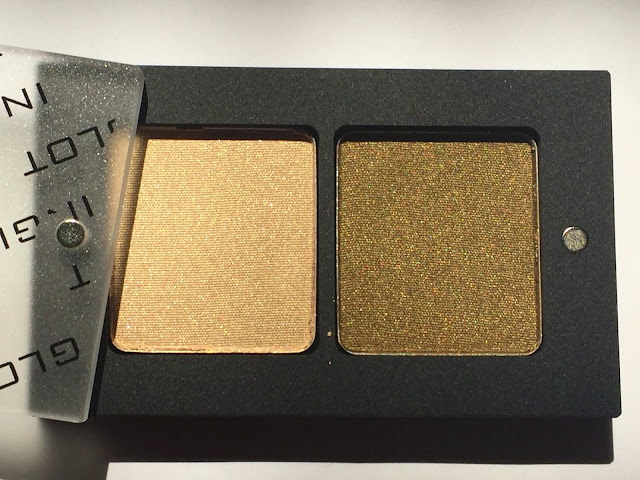 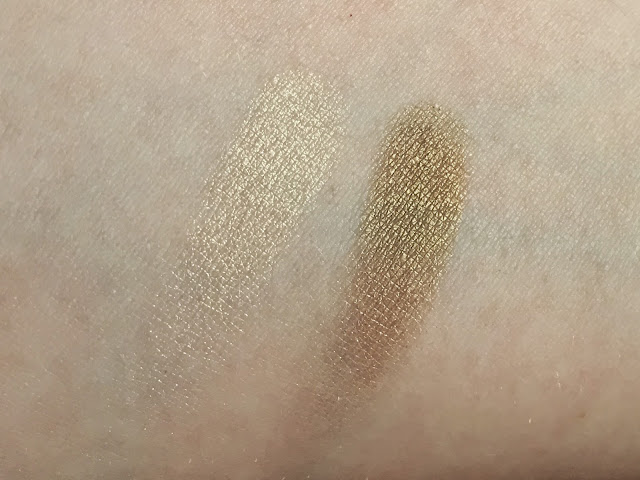 Each of these swatches has been built up somewhat, as the eyeshadows are on the light, powdery side. As I've said before, I don't actually like hyper-pigmented, hyper-opaque shadows, but I do wish these had a little more opacity.

Here's 08 (right) next to theBalm Snobby, the aforementioned yellow-gold. As you can see, 08 is cooler and paler, which means that it pairs more harmoniously with my favorite eyeshadow colors. Granted, theBalm's formula is better than Inglot's (that's one pass of Snobby vs. two or three of 08), but I'm not sure I've ever worn Snobby out of the house, so. 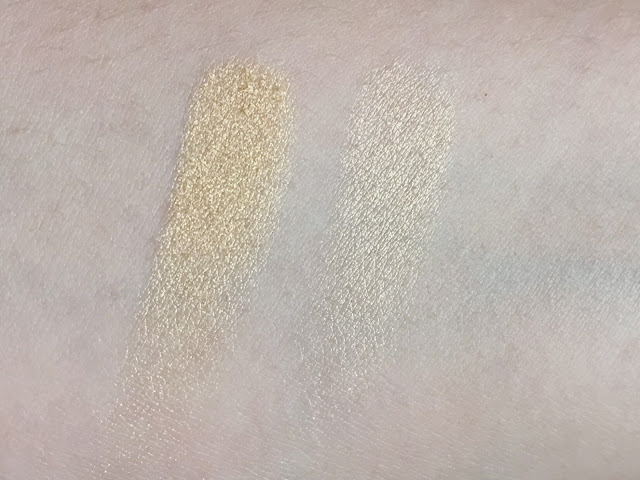 And here's 433 with a few bronzey shades, plus one olive. Left to right: Maybelline Bad to the Bronze, theBalm Seductive, Inglot 433, NYX Iced Mocha, and Kiko 270. 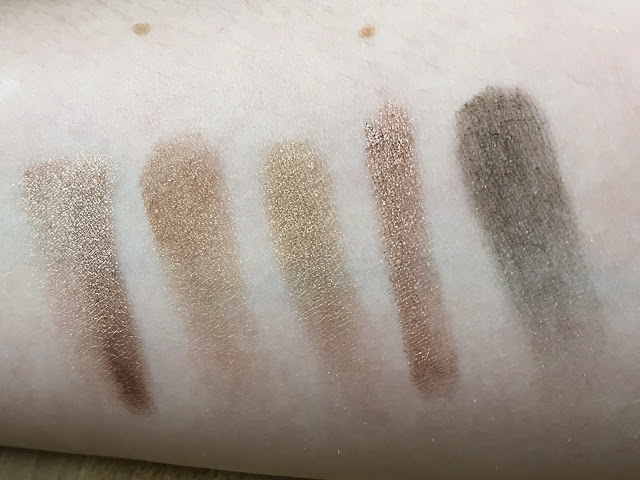 433 is by far the goldest (is that a word?) of the three. Unlike Snobby, though, it has an antiqued, almost decayed quality to it. I love this color, guys, and I don't even know what to call it.

It's a testament to my love that I wore this duo for three days in a row this past week, each time in the same placement and with the same accompanying makeup: Illamasqua Zygomatic blush and Milani Matte Naked lipstick. I realized the other day that I haven't posted a makeup look on this blog since April 13, a full six posts ago, so allow me to rectify that lack with a surfeit of my face. In all the photos, I'm wearing 08 on the inner 2/3 of my mobile lid and 433 on the outer 2/3 and along my lower lashline. 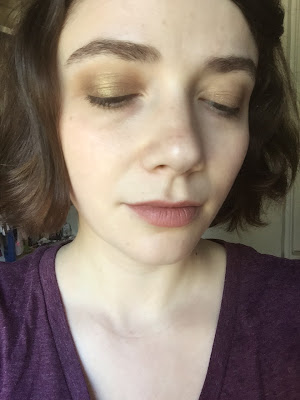 The Inglot SA assured me that the combination would set off my eyes, and I think she was right: 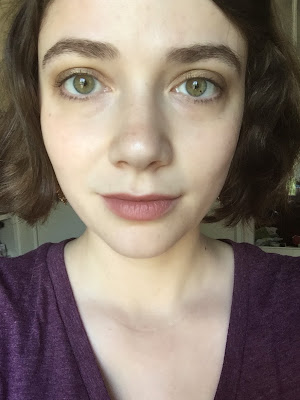 Now, what to call this duo? I'd like to give it a place name, along the lines of most of the NARS duos--this is the poor man's Paramaribo, after all. Something that evokes Renaissance England, I think. Whitehall? Hatfield? Help me out here.
Posted by auxiliary beauty at 2:27 PM