1. Spend several days wondering whether 27 is too old to wear a topcoat containing holographic microglitter and large pastel daisy-shaped glitter. Entertain paranoid visions of one of your advisors running into you in the department office, noticing your daisy-covered nails, and immediately losing all respect for you. 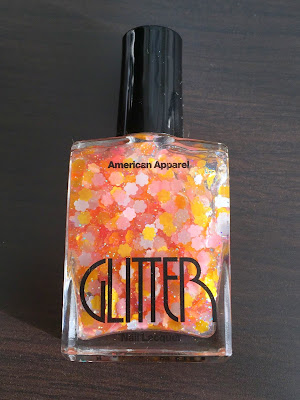 2. Decide that 27 is not too old, provided you layer Daisy Field over a neutral color. Choose Essie Marshmallow, which you haven't worn in well over a year.

3. Remember why you haven't worn Marshmallow in well over a year: because it still looks streaky after three coats and it takes forever to dry. %$@#@%#$!!!11!

4. 24 hours later, all three coats of Marshmallow are fully dry. Now for the fun part: adding the daisies.

5. Notice that the daisies are pink, yellow, and white, not pink, yellow, and orange, as you initially thought. This means that the white daisies won't even show up against the Marshmallow backdrop. ^%$&*!!1! How could you have taken so many photos of the bottle without observing the actual color of the polish? Have you slipped into the millennial habit of letting your smartphone camera replace your eyes? Are you looking without really seeing?

6. Glop a big puddle of Daisy Field onto your thumb, realizing too late that the puddle has none of the daisies in it. Ah, it's one of those topcoats.

7. Somehow manage to get a couple of daisies, and several layers of topcoat, onto each nail. Admire the result: 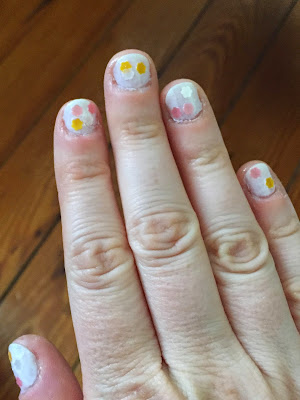 9. Compulsively peel off the daisies throughout the day, then remove Marshmallow. Back to square one.

10. Go for another neutral base color, but make sure this one is dark enough that the white daisies show up. Essie Chinchilly seems like a good option: 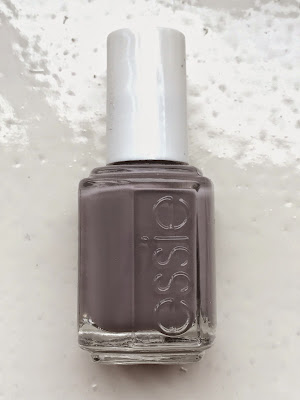 11. Apply three coats of Chinchilly, which is mercifully quick to dry. Next day, head into the living room at 6:30 am and stare down your nemesis. You'll master Daisy Field this time, damn it.

12. First, apply a thin coat of Daisy Field to all of your nails, avoiding the flower glitter. The first coat will deposit the smaller bluish glitter and provide a sticky base for the daisies.

13. Glob a puddle of polish onto a piece of paper. I used a handout from an academic talk given by someone I disliked, someone who would probably bristle at the thought of his very srs handout playing host to flower-shaped glitter.

14. Fish the flowers out of the clear goo and arrange them on your nails to your liking. I used a fingertip for this. Make sure the flowers lie flush to your nail; if an edge is peeking up here and there, that piece has a good chance of falling off. 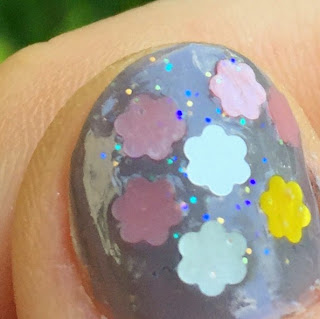 15. Add a clear topcoat to seal in all in (I used Seche Vite). Note that the topcoat won't produce a perfectly smooth finish: the flowers will still feel raised from the nail and rough to the touch. 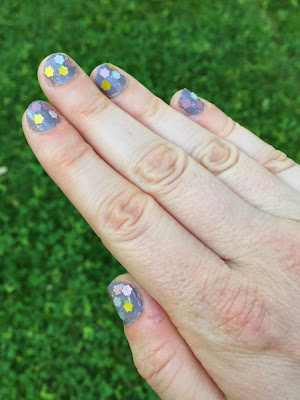 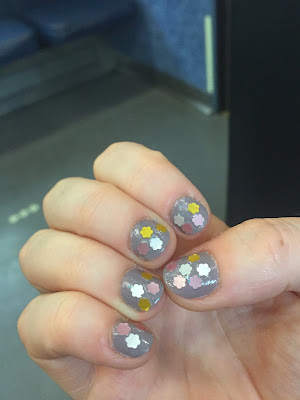 17. Take a shower and notice that a few daisies fell off when you washed your hair. Replace them as best you can.

18. Go about your daily business. Damn it, there are two more daisies gone.

19. When all of your fingers except your thumbs are missing daisies, remove the marred polish and go for a simpler design: Chinchilly under a coat of Daisy Field minus the daisies. The silvery-blue glitter turns out to be very pretty on its own. 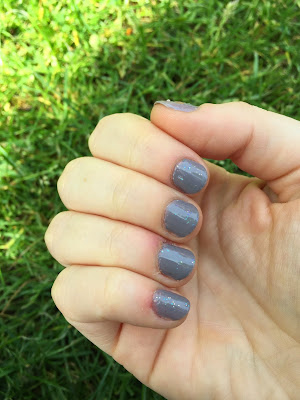 So, yeah. Daisy Field is a fussy, time-consuming product. I could have predicted this had I been used to working with topcoats containing big glitters, but I usually avoid anything that could be read as "nail art." I love seeing nail art on other people (witness all the nail blogs I follow on Tumblr and Instagram--this is my favorite one), but I always fear that it makes me look childish or unprofessional, which is absurd given that I'm a graduate student without a real-person job. I loved the effect of Daisy Field, though; I just wish all the daisies had lasted a bit longer. They're too big to lie flat on the most curved parts of my nails, so one petal or another always seems to be poking up.

I doubt I'll spend another day placing daisies on all of my nails, but I might wear them again on my thumbs for accents and use the smaller glitter on my other nails. I wouldn't dissuade anyone from buying Daisy Field; just know what you're getting yourself into. 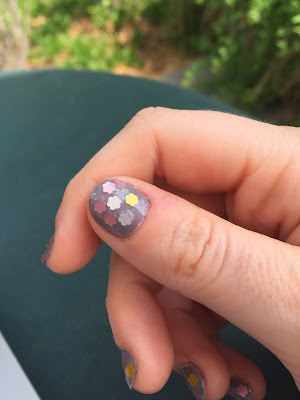 So pretty, though. So, so pretty. And maybe the prettier for being ephemeral? Who knows.
Posted by auxiliary beauty at 2:38 PM