I like buying makeup to commemorate happy occasions. Lipsticks and nail polishes and eyeshadows function as little pins that secure my memories to the material world. That's why I started my Lipstick Chronology (which reminds me, I haven't added to the chronology since March). And that's why, when I learned two weeks ago that my first academic article had been accepted to a journal, I immediately thought, "I'm going to get that lipstick." I was standing in London's National Gallery next to the El Greco paintings, but I'm afraid my mind was elsewhere: 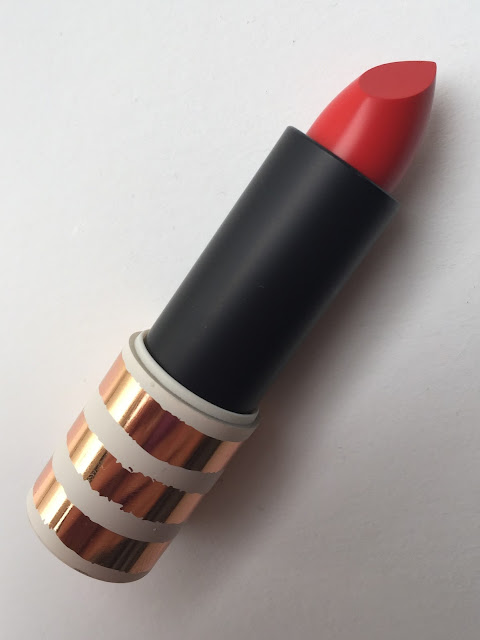 The lipstick in question was orange-red Rio Rio, Topshop's most famous beauty product, beloved of Liv Tyler and Alexa Chung. Released in 2010, Rio Rio is as iconic as a five-year-old lipstick can be, and Topshop honored its status by making it the cornerstone of the 5 Years of Topshop Beauty collection. Here's a little leaflet I picked up at the store: 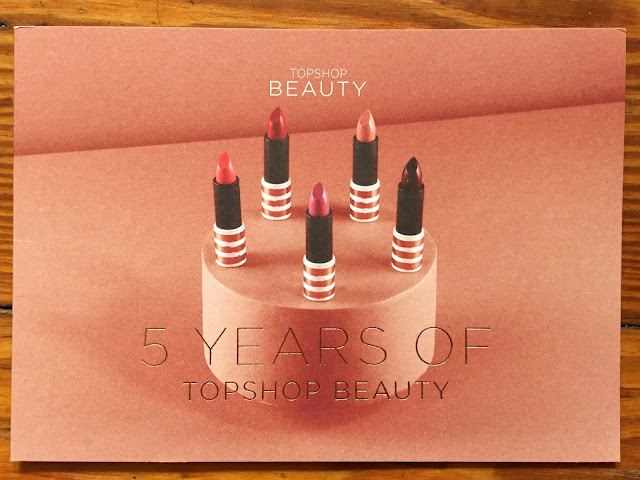 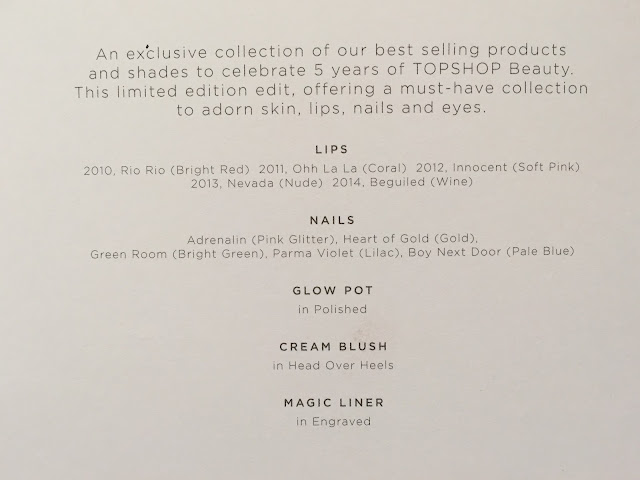 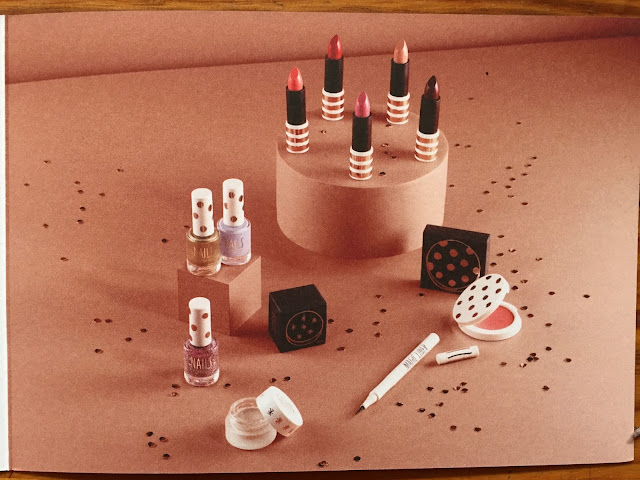 When I first noticed the 5 Years of Beauty collection at the Birmingham Topshop, I found it a tad underwhelming. The centerpiece is a group of five lipsticks, one from each year of Topshop's beauty line, packaged in white-and-gold tubes instead of white-and-black. There's also a small edit of other products: a few nail polishes, a cream blush, a potted highlighter, and an eyeliner. It's unclear whether Topshop brought back discontinued products for this collection or just repromoted existing ones, but either way, I wasn't exactly bowled over when I first encountered it in the store. I did, however, swatch all the lipsticks, just 'cause. 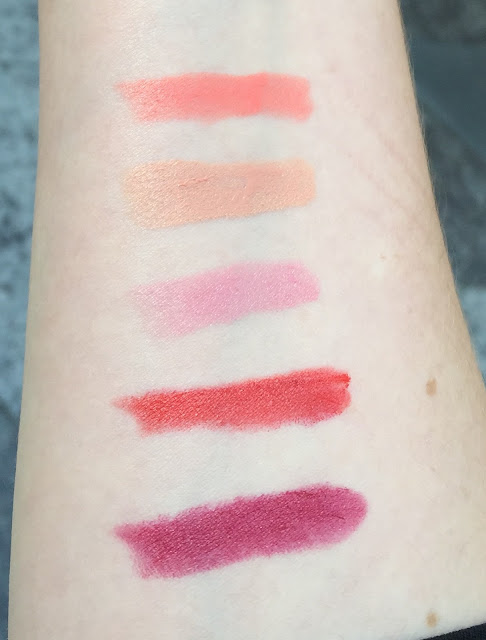 I thought this would be a simple swatch-and-forget deal, but Rio Rio stuck with me, though I hadn't even tried it on. (You don't want to hear about the state of those tester lipsticks; my swatch of Rio Rio looks uneven because the bullet had a smear of purple that I tried not to get on my arm.) As with Milani Coral Cove, posting a product shot on Instagram somehow cemented my desire. I found myself thinking about Rio Rio's smooth semi-matte texture and bold yet restrained warm red color. I took a mental inventory of my lipstick collection and convinced myself that I had no dupes. I was even tempted by Topshop's half-assed gold repackaging. Finally, I resolved that when I was next in the vicinity of a Topshop, I'd pick up Rio Rio. And as it happened, I was going to be in the vicinity of a Topshop right after my National Gallery visit, because I was meeting Teresa for some pre-dinner beauty shopping! Which meant that Rio Rio would be the pin that anchored not only my memory of receiving that email next to the El Grecos, but also my memory of meeting a longtime online friend--indeed, the first person who ever commented on my blog. Hard to believe that was just over a year ago; it feels like much longer.

I met Teresa outside the Illamasqua store, and we browsed for a bit there. Check out that teal lipgloss! 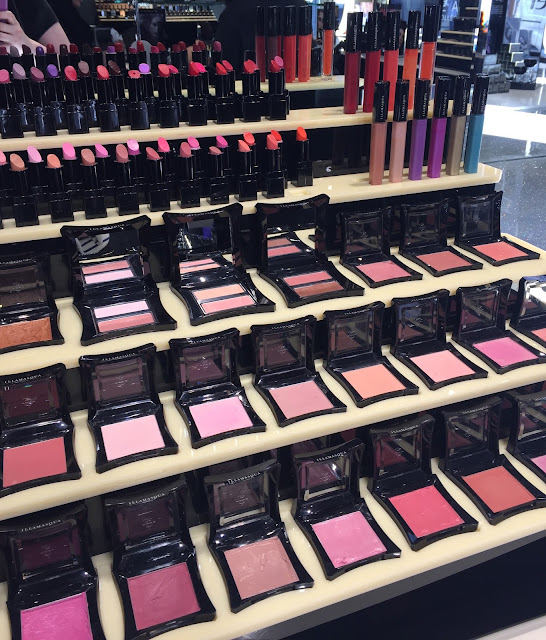 Then we popped into a few stores on Oxford and Regent streets. Liberty, the iconic high-end department store and manufacturer of eminently pinnable fabric patterns, was celebrating its 140th birthday with a giant Liberty-fabric maypole: 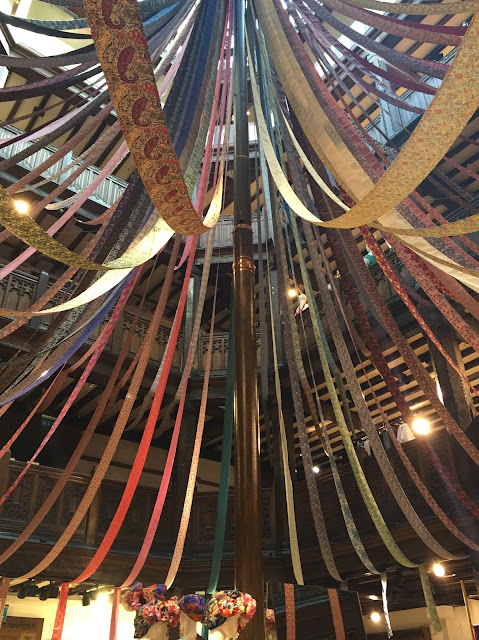 I'd been to Liberty before, but had focused on the fabric selection upstairs and skipped the beauty department. This time, Teresa and I spent some time at the Surratt counter (the brand has just launched a line of matte lip crayons), the perfume hall, and a display of artisan chocolate, from which I chose a celebratory bar of white chocolate with sea salt and pistachios. I'd never heard of the brand Amelia Rope before, but I was deeply impressed with the clean, modern packaging (and, a few hours later, with the chocolate itself): 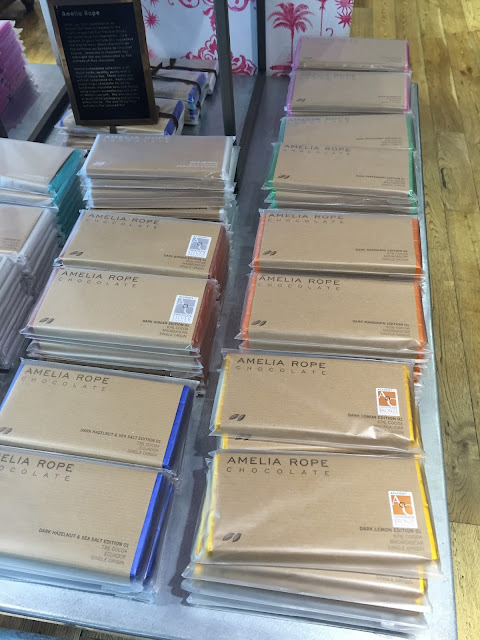 Onward! The Regent Street Kiko, as always, was playing what Liz calls "BUY KILL BUY KILL" music. The Infinity eyeshadows, two of which I reviewed almost exactly a year ago, seemed to be on clearance: they were marked down to £2.50 from their usual £5, and quite a few shades were already sold out. ("Finished," as the haughty Italian salesman put it.) I chose #264, a teal with gold glitter, and went to pay. At the register, two frantic girls were telling the cashier that one of them had lost her phone. "Well, if you'd left it here, we'd have it," said the woman in a tone of extreme boredom. "It was probably stolen." I mean, damn, that's cold.

We also checked out & Other Stories' makeup and clothing collaboration with the designer Rachel Antonoff. She'd named her trio of nail polishes after three of her friends, and I noticed that one was called Tavi Mint. I was reminded that I'd exchanged emails with Tavi Gevinson back in 2008 or 2009, before she became profesh and acquired a PR team. She was just starting to receive media attention, and she clearly felt conflicted about it, because she posted on her blog that she didn't want any more press. This was something of a blow to me: I had a (not-very-good) column in my university newspaper and had been planning a piece on her. But I wanted to respect her wishes, so I emailed her to ask if she'd mind appearing in my small-time column. She asked me very politely not to write about her, and I didn't. I'll never forget how gracious she was. Yeah, this was a pretty irrelevant story, but you guys don't come here for straightforward lipstick reviews.

Finally, we reached the giant Oxford Street Topshop, whose beauty selection was far more impressive than the one in Birmingham. ALL TEH POLISH: 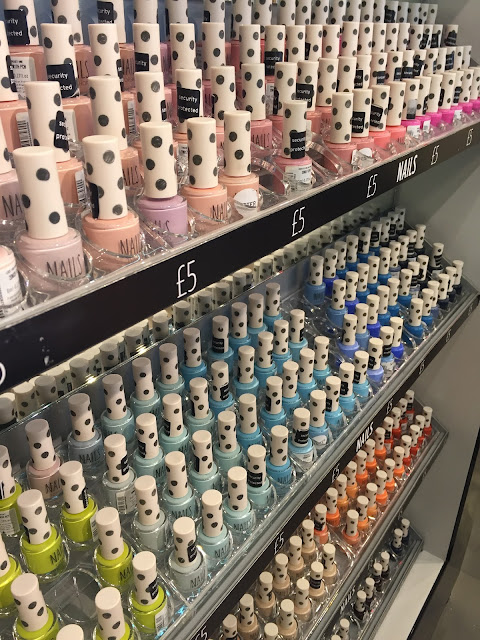 Here's the 5 Years of Beauty display, along with Teresa's hand. Hi, Teresa! 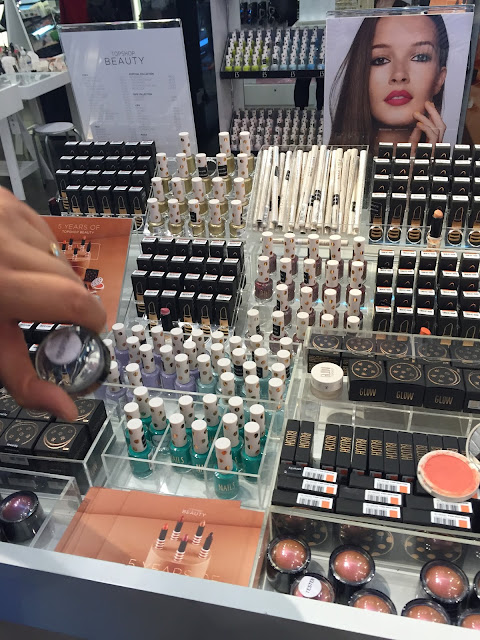 I was tempted by that teal polish, but I confined myself to Rio Rio. For my mom, who had requested a dark plum lipstick, I chose Inhibition. I hope she likes it (and if she doesn't, I'll gladly adopt it). Teresa picked up one of Topshop's new Lip Ombres: two pots of lip color in one hefty compact. The colors and creamy formula were tempting, but I know myself too well to buy any lipstick that doesn't come in a traditional bullet. I'm loving all the explanatory literature that Topshop has produced for its new collections, by the way: 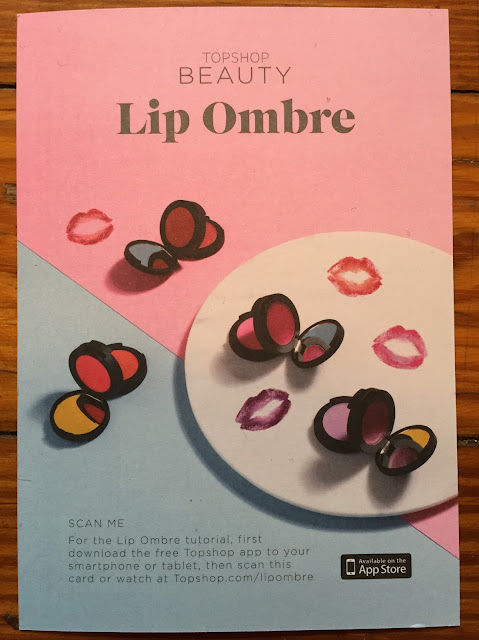 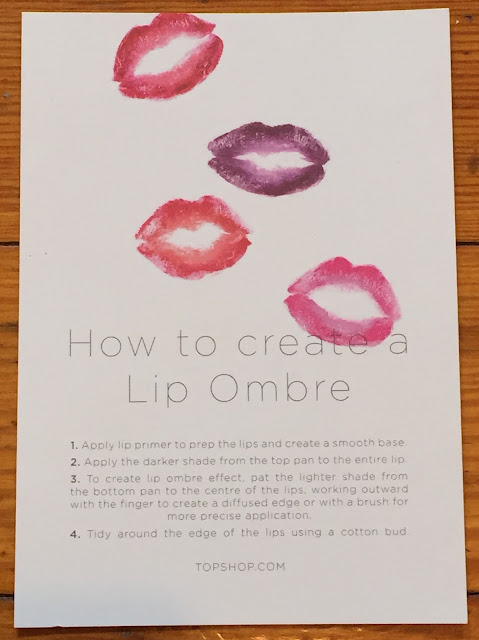 Then we met up with my boyfriend and had an outdoor drink at a pub (outdoor drinking on warm evenings is one of Britain's greatest traditions), followed by dinner at a Persian restaurant near Covent Garden with Teresa's fiancé Will and their flatmate. The place looked like a bit of a dive, but my fried halloumi with grilled vegetables and three kinds of rice was a revelation. Who says you can't eat well in England? 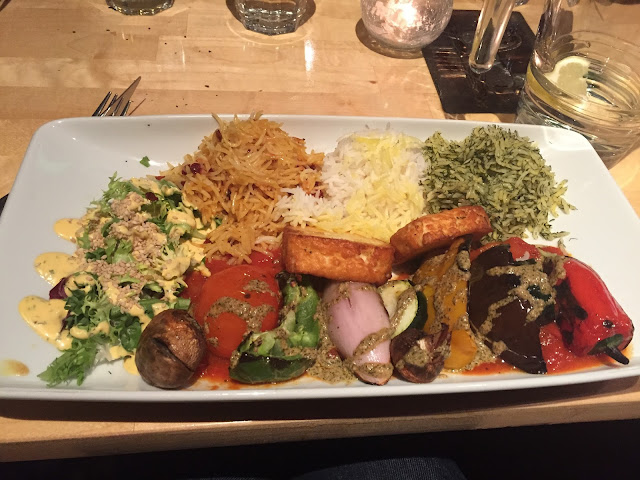 It turned out that Will had met some maiko and geiko on a business trip to Kyoto several years before, and when he showed us photos, I totally geeked out and identified the two maiko by name because that's the sort of thing I do when I've known someone for a mere 30 minutes. /o\

Now, to business! I've worn Rio Rio several times since I bought it, and though I find it less impressive overall than Topshop's Matte Lip Bullets, I'm still more than satisfied. 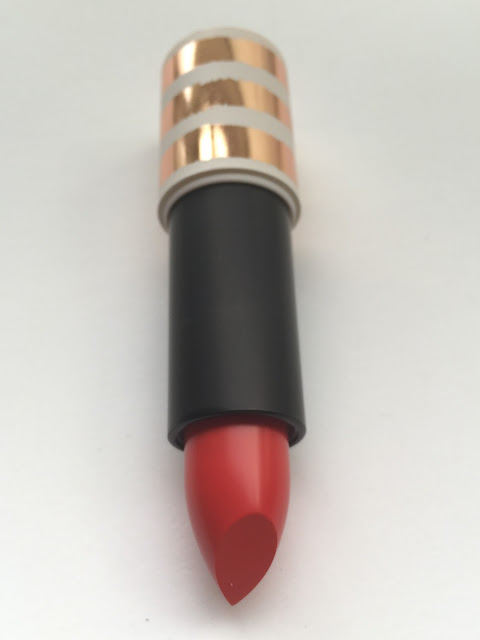 The packaging is sleek and serviceable: a white tube that closes with an officious click. I should mention that on the tester tubes I saw in the store, the gold stripes were almost completely worn off. Not a huge problem, but something to keep in mind if you were over-the-moon excited about the limited-edition packaging. The regular black stripes don't seem to wear off at all! 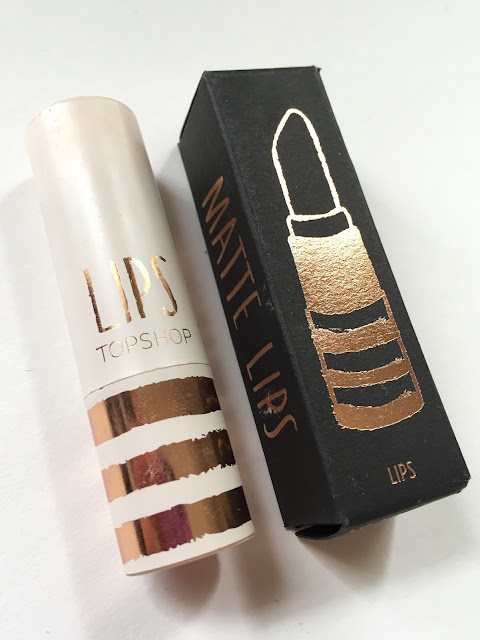 Rio Rio's color is great: bold without the slightest hint of neon, so it doesn't take over the face. It reminds me of the OG orange-reds, MAC Lady Danger and NARS Heat Wave. Topshop markets Rio Rio as a matte lipstick, but I'd describe it as semi-matte. It has a very faint fruity smell, reminiscent of strawberry or raspberry, that dissipates soon after application. 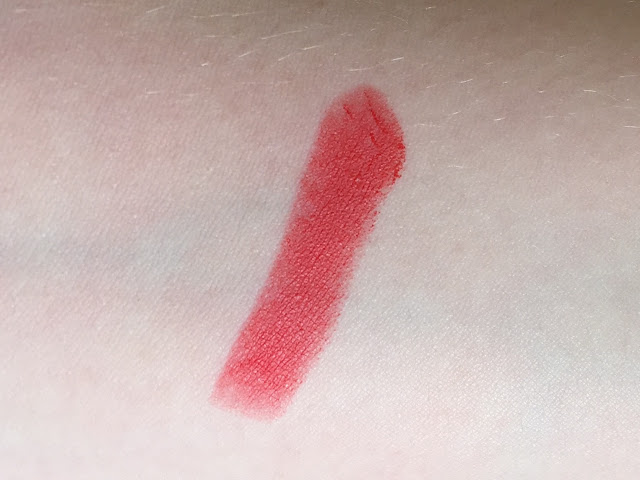 Do I have a dupe of Rio Rio? Depends on how you define "dupe," I suppose. I don't think it's too similar to my older orange-reds, and that's what counts. Left to right: Revlon Fire & Ice, ColourPop Frenchie, Rio Rio, Maybelline Vibrant Mandarin, Wet n Wild Purty Persimmon. 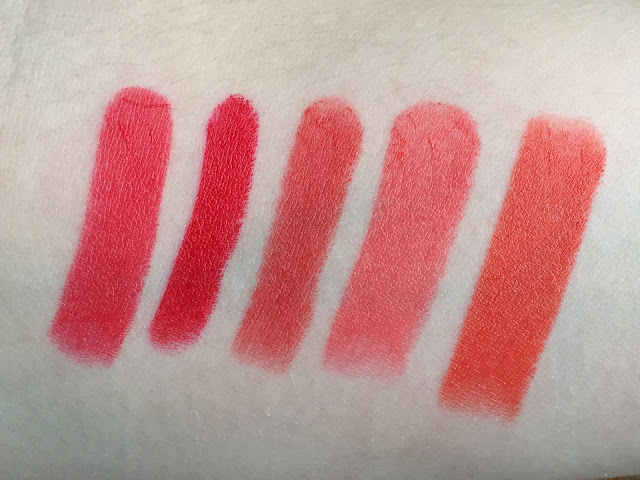 When Rio Rio is swatched next to brighter colors in the same family, you can see that it actually has a touch of brown which, though almost unnoticeable on the lips, helps tone down that orange-red punch. The formula applies smoothly and feels lightweight, a bit like the NARS Audacious lipsticks. It's neither drying nor moisturizing.

Where Rio Rio lapses from perfection is in the longevity department. As I've said many times before, I don't expect any lipstick to last through a meal. But I also don't expect a bold, opaque lipstick to come off on glasses and even fade while I'm talking. It doesn't make me feel terribly confident in how I look. At least it fades evenly! And I think it suits me, though oranges often don't. It must be that slightly burnt look. It also looks awesome with navy blue, my favorite color for tops. 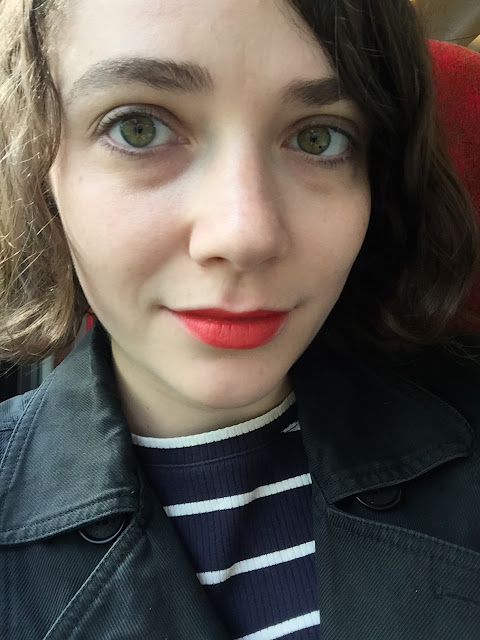 And with the blush I've been wearing so often this spring, Sleek Life's a Peach. 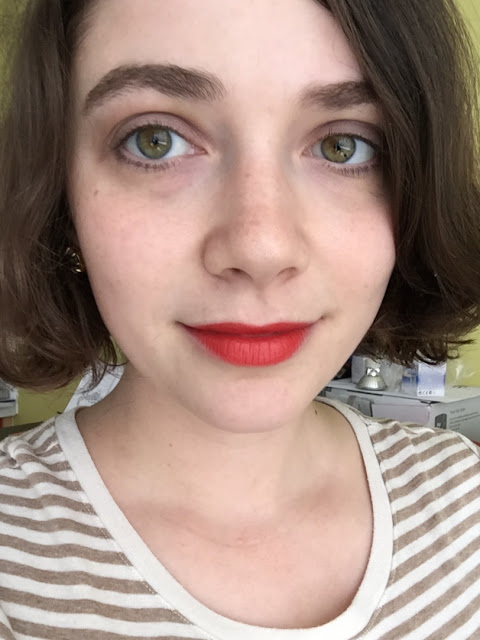 Now that I'm back in the States after two and a half weeks abroad, I trust I'll be able to post more often, as I have a few more British beauty buys to review. Hopefully not at such great length, though you never know with me...
Posted by auxiliary beauty at 11:41 AM