When ColourPop released a line of 15 highlighters early last month, I didn't take much notice. I'd never used a highlighter before, and since this hot, humid weather gives me a perpetual...let's call it "glow," I didn't think I needed any extra radiance. If anything, I needed the opposite. But curiosity and the usual flood of gushing ColourPop reviews prevailed, and I eventually decided to pick up a couple of highlighters. 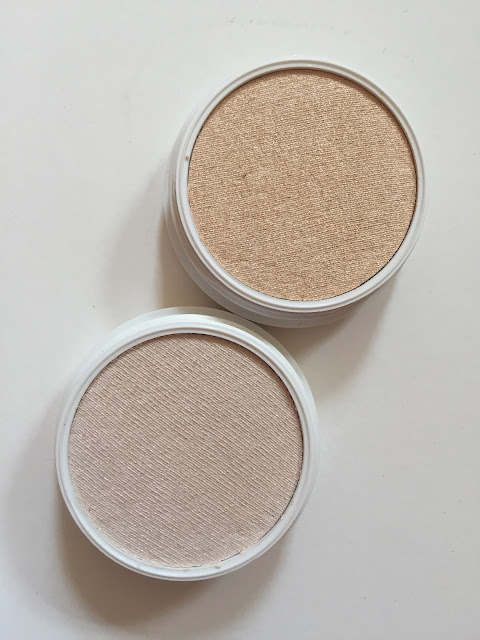 The highlighters are $8 each, and I decided to order two. Narrowing down the selection was difficult, since some of them differed only minutely from others. I had a few requirements, though. Above all, I wanted to avoid any highlighters with big glitter chunks, which several of the ColourPop highlighters seemed to have. My desired effect was more along these lines...


I also shied away from the highlighters that seemed too dark or orange for my skintone and the ones that looked more like pearlescent blushes (though Sticky Sweet might be a future purchase). After a few weeks of indecision, I decided to place my order, if only to free up space in my brain for more important things. I settled on one conventional-looking highlighter, the pale gold Lunch Money, and one slightly eccentric one, the iridescent pink Monster. I also ordered the matte eyeshadow in Cowboy and the Lippie Primer, which I'll review before long. 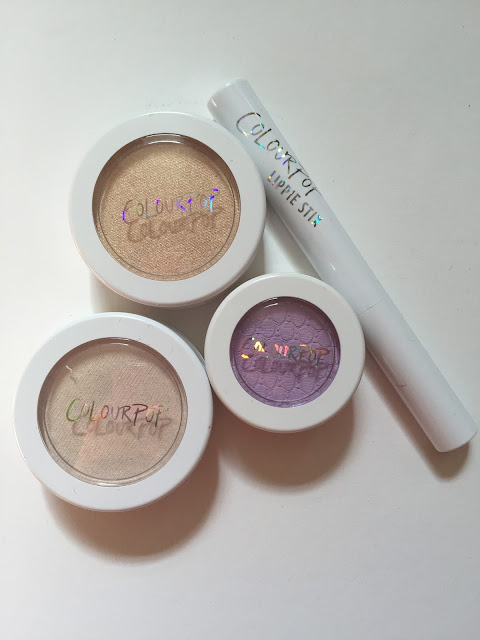 In direct sunlight (Lunch Money on top, Monster on the bottom): 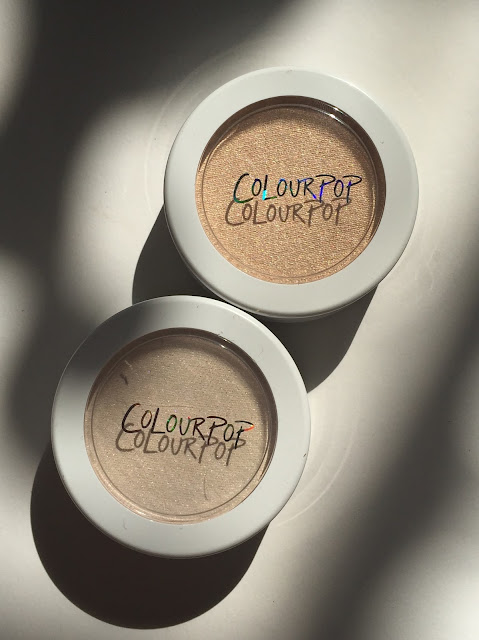 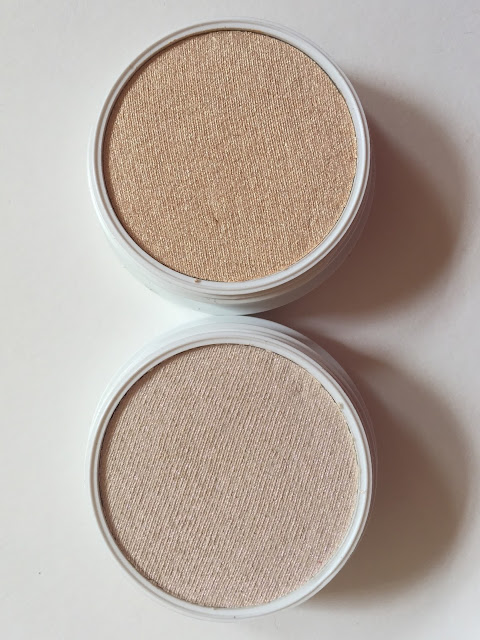 The ColourPop highlighters have more or less the same soft, creamy formula as the brand's eyeshadows; in fact, they feel a bit lighter and fluffier. I apply them as I do the eyeshadows: by dabbing them on with my fingers. I'm very ignorant of brushes in general (my collection comprises two blush brushes, one eyeliner brush, and one eyeshadow brush), so I can't predict what someone with a sizable brush hoard would use to apply these highlighters. It does seem to me that a brush might blend them away to nothing, and that fingers might still be the better tool. 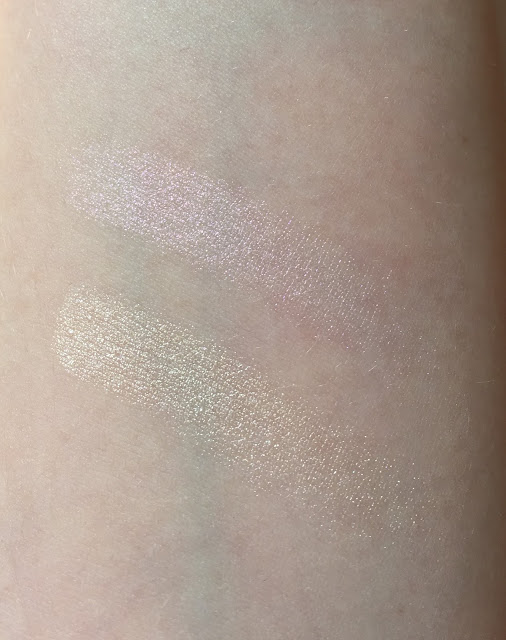 The ColourPop website describes Lunch Money as "soft light gold with a reflective golden duo chrome [sic; y'all need a copy editor] finish." I'm not sure the people at ColourPop know what "duochrome" means. They call Bae "duochrome" when it's a plum eyeshadow with turquoise glitter, and they call Lunch Money "duochrome" when it's, well, gold. That's all it is. A pale yellow-gold, pretty but monochrome, which isn't a bad thing. Not every beauty product has to be crammed full of special effects; we don't all live in a k-pop video.


On my face, Lunch Money is very, very subtle. So subtle, in fact, that I have to apply two or three layers to get it to show up at all. It gives me a bit of a glow, but it also seems to emphasize the fine lines around my eyes. In other words, it does the opposite of what a highlighter is supposed to do (make me look fresh-faced, dewy, whatever). Given the shallowness of the ColourPop pans and the unwillingness of Lunch Money to actually be visible on my face, I can see myself going through this highlighter in a month or two. (Update, 9/1/17: I've been using Lunch Money for two years now, and though it's showing a lot of pan, I'm nowhere near finished. It hasn't dried out at all, either, which is impressive.)

Here I've applied it in a C shape from my cheekbones up to my temples; I'm also wearing Illamasqua Zygomatic blush. 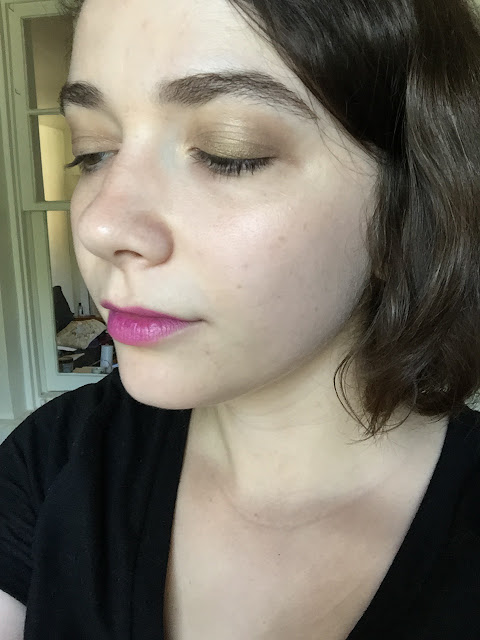 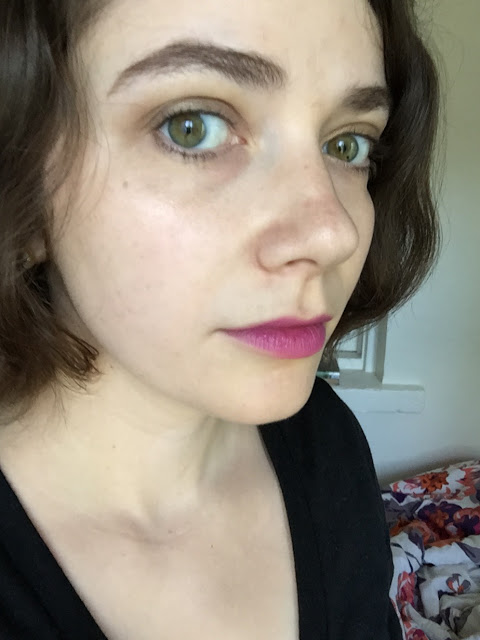 There's not much to see here, but I suppose I'd rather glow unobtrusively than dazzlingly. Lunch Money is fine; I don't regret buying it. It's just not a standout product. Then again, I've used it a mere two times, so I'm reluctant to declare it either a success or a failure at this point. (Update, 9/1/17: Two years on, Lunch Money is by far my favorite highlighter. I reach for it at least twice a week, and I'll probably repurchase it once I use up this pan.)

Monster, though? Monster is magic. Monster is love. ColourPop describes it as "light pink with highly opalescent duo chrome finish," and once again I'm not sure that "duochrome" is an accurate description. Monster has two settings: fuchsia fairy-princess iridescence and invisibility. In the photos below, I've applied Tony Moly Milky Violet blush to the apples of my cheeks and layered Monster on my cheekbones. From the front, all you see on my cheeks is my blush: 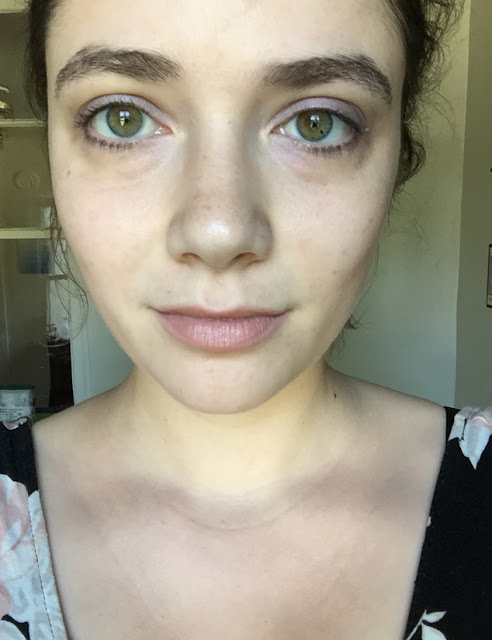 But when I turn to the side... 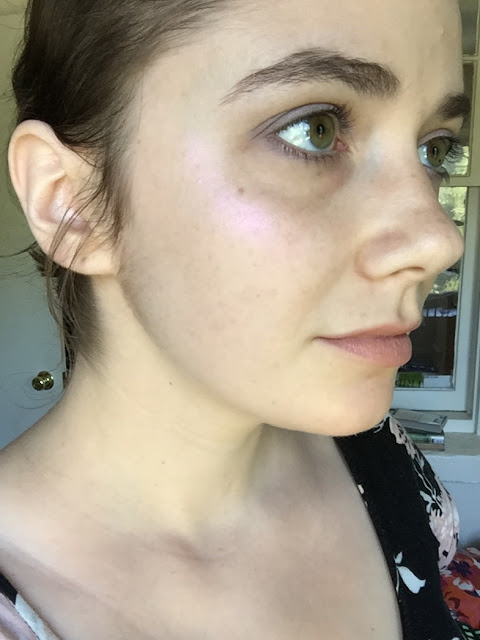 So good, right? I dressed as a fairy every Halloween from the ages of four to ten (with the exception of one year when I was a princess and wore my fairy dress without wings), so it's only natural that I'm enamored of this highlighter. It's unnatural in the subtlest way: very Edwardian cyborg. 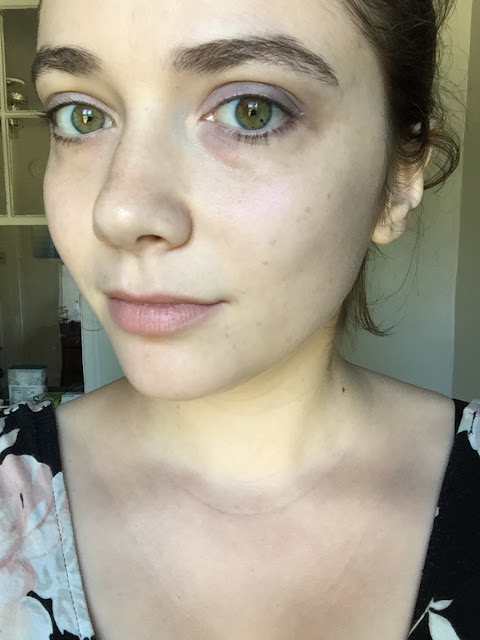 From the photos I've seen on blogs and Instagram, Monster shows up just as vividly on dark-skinned people as it does on me, if not more so. It's the sort of product that suits everyone because it looks natural on no one.

In my next post, I'll review Cowboy (which you can see on my eyes in the Monster photos) and the Lippie Primer. For now, though, have you tried any of the ColourPop highlighters?
Posted by auxiliary beauty at 11:22 PM